We’ve read to the boys since they were tiny, since before they had any idea what we were doing, back when we felt silly to be doing it — we did it anyway.  Story time has been a part of our evening routine since before the boys could walk.  They love it, they look forward to it.  “Brush your teeth or we won’t have story time” has been an incredibly effective evening motivator.  But though they love to be read TO, and both boys have memorized, and love to recite, parts or all of some favorite books, we’d made almost no progress in getting them to actually read themselves.  B could read his name, Liam’s name, “red”, and “toy” before school started this year.  That was it.

I was a little worried.  I know he’s only 6, and he’s been spending a lot of his mental energy over the past few years learning a new language (and probably teaching himself differential equations in his sleep), but still, I felt like maybe he ought to really be reading.  After all, reading IS fundamental.  All of the kids of my friends at home have learned to read in kindergarten (or earlier), and they don’t really do that here (the focus was on correct speech, rather than reading, which helped immensely with his conversational German, but not so much with reading English) so I was a bit concerned.  Plus, I had no idea how to get it to happen.

When B started school this year, among many other things, I was worried he’d be the only kid in his class not reading.  I shouldn’t have been.  Very nearly half the class had a similar reading level to B, so he was certainly not the only non-reader.  (Of course, there are also kids in his class who could read and write in more than one language — in more than one ALPHABET — so there was quite a spread of skill levels.)

Early on in the school year, we weren’t making much progress, and I was strongly resisting my urge to push, knowing that me adding pressure to the situation wasn’t going to help.  I attended a morning training seminar at B’s school, geared at helping parents help their kids with reading . . . which did help a lot, and which strongly reinforced the fact that I shouldn’t be pressuring him.  Around the same time, B came home with a website recommendation from his teacher.  They’d been using “Teach Your Monster to Read” at school, and apparently, B loved it.

Over that weekend, we got B set up with it on the computer, and the results were amazing.  Not only was he able to run the game almost entirely on his own, but he was READING.  It started off with associating letters and sounds in a variety of short games where B could collect items to decorate his “monster” with whom he was playing the game.  Over the course of the next few weeks, he moved through the levels and had a whole set of letter/sound combinations that he knew well.  The game then began connecting the sounds into short words, and before I knew it, he was really reading and sounding out short sentences.  Seriously, watching him actually read something on his own has to be one of the coolest things I’ve ever seen.  (The website is free.  I totally recommend it.) 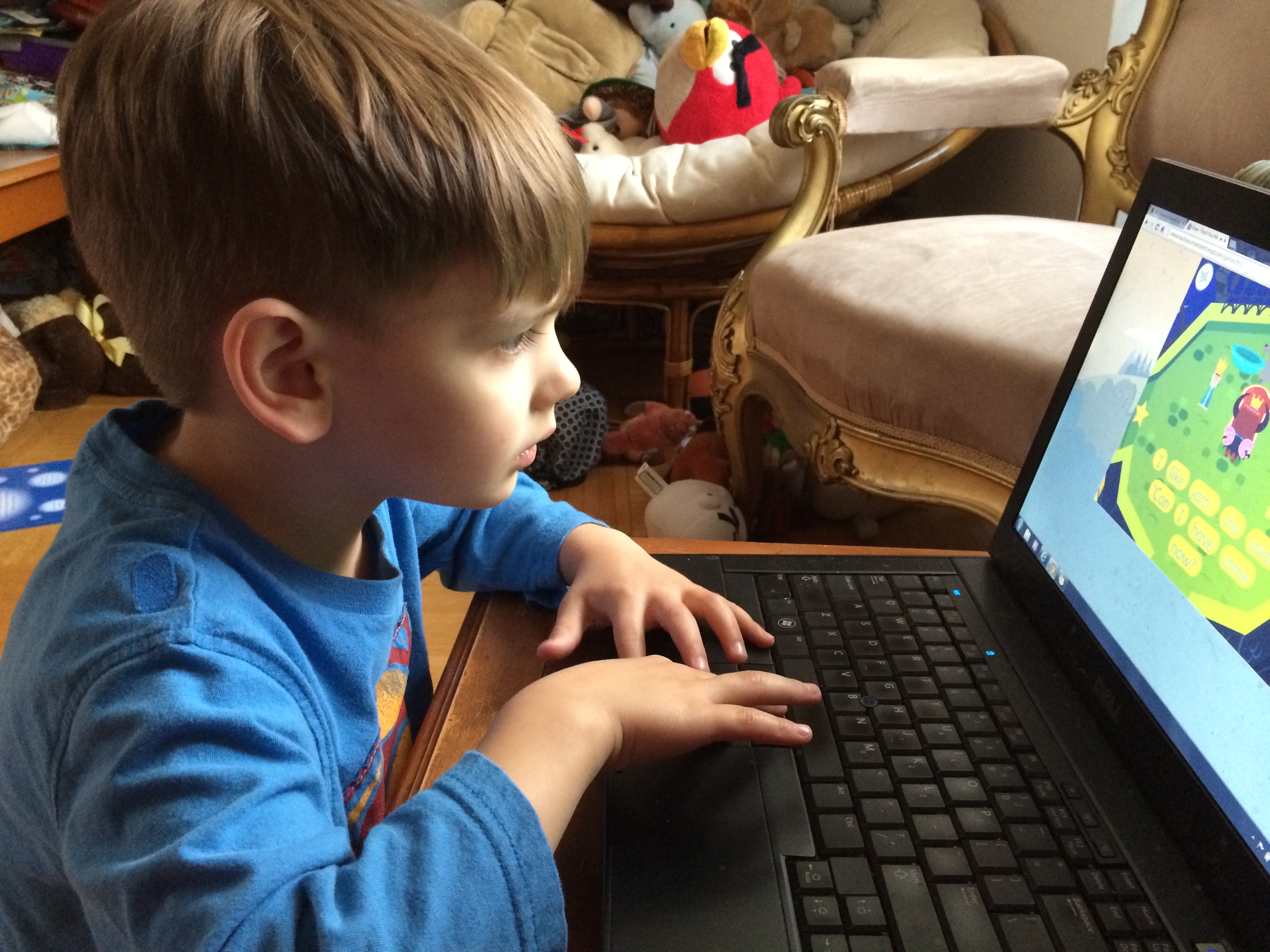 We’re 3+ months into the school year, and B’s progress has been AMAZING.  He’s moved on to reading longer stories, to conquering more complex words, adding new punctuation and concepts (contractions have been a challenge).  He finished the monster game a good while ago, and there’s no doubt in my mind that it was a useful tool for him (and remarkable for me because it was the first time I really witnessed him reading), but I also know that the real magic came from the work that he and his teacher put in together.  It’s been an amazing transformation, and I can’t believe it was only 3 months ago that I was fretting about whether or not he could read.  He’s reading real books now. It is just the most amazing thing to see.  He’s still working very hard, and learning more all the time, but he is definitely reading!

He got tired of it after a while, but I brought it back out again recently, mostly because I figured Liam was just about the right age for it.  Liam loves it as much as B once did.  Now B has started spelling and reading the words in the book, and Liam “reads” it to us, too.

Last night, after Liam took a turn “reading” it aloud, B picked it up.  Instead of just reading it, he translated the whole thing into German.  No kidding.

It might just be the coolest thing I’ve ever seen him do (so far).

I love to read.  I have for as long as I can remember.  I have distinctly fond memories of the library and the book sales from as far back as elementary school.  I would lose myself in books, and I’ve always been someone who returns to her favorite books again and again — I don’t feel like just because “I’ve read that” that I can’t read it again.  Reading is one of my favorite things to do when I’m not doing anything — on vacation, by the pool, on a trip, late at night.