When people think of Austria, they think of the Alps.  And rightly so.  The vast majority of Austria is mountainous (over 3/4 of Austria is in the Alps), and a good bit of it is uninhabitable due to the height and steepness of the peaks through the center and west of the country.

Vienna, however, is in the far east of Austria, and, rather than being in the mountains, it is located in the gently sloping valley carved out by the Danube.  Vienna is hilly, but not mountainous (my apartment is only at 186 m above sea level, for example).  So, if we want mountains, we have to travel.  We’ve been all over Austria’s central mountains (including very near the highest, the Grossglockner), through the Italian Alps on a train (which resulted in a bit of a shock when we woke up and saw ourselves surrounded by snow), and have visited both of Vienna’s “local mountains”, Rax and Schneeberg. Though we spent lovely days at both of the local mountains, the trip back and forth to Schneeberg was definitely simpler, so this past May, when winter was behind us and we felt like getting out to the mountains for a bit, we went back to Schneeberg.

Our only significant complaint about our last trip to Schneeberg was that, due to a lack of detailed planning, we didn’t get enough time to explore.  So this time, knowing that the trip there was long-ish, and that in order to maximize our mountain hiking time, we’d have to plan our connections (3 different trains, not including Vienna’s public transit) carefully, we planned ahead.  The desire to plan ahead was tempered by our desire to have at least decent weather at the top, so though we planned ahead, we didn’t want to buy our actual tickets too far ahead.  But we were (theoretically) prepared.  The morning of our trip, we got up early, and left the house with nearly an hour to catch our train (the trip to the train station is less than 25 min) … and yet, we somehow missed our train.

I’m still not entirely sure how it happened.  We left the house with plenty of time.  We had to wait a while for our first U-Bahn, and then a bit for the second, but sometime shortly after we got on that second U-Bahn, I realized we were, at best, barely going to make our train.  As soon as we got to the train station, we started running.  It’s a big train station (which was part of the miscalculation — I had counted “arriving at the train station” as “being at the tracks”, which is about a 10 minute underestimate when traveling with kids), so we ran across the whole thing.  I still had to print our tickets, too, and I was shaking with the stress and adrenaline, so I entered the confirmation number incorrectly.  And that was it.  Dan and the boys had run up to the tracks to wait for me, but I never even got up there.  They were on their way back down, having seen the train pull away, before I got there.

It wasn’t really a big deal — the next train was in an hour — but I was so disappointed.  I felt awful for dragging us all out of bed extra early for no good reason.  I was embarrassed that I had failed to allow for enough time.  I felt guilty that I’d made my kids sprint through the train station for no reason.  I felt terrible that they felt stressed and worried about our day.  So I cried (which did not improve the stress and worry situation, which made me feel worse).  But, all was not lost, and so I went into the ticket office and got us new tickets for the next train.  I found out when our new connections would be and we crossed our fingers that we’d be able to change our reservation for the Salamander train that would take us up the mountain.  Then we got breakfast, regrouped, and got on the next train without a problem. 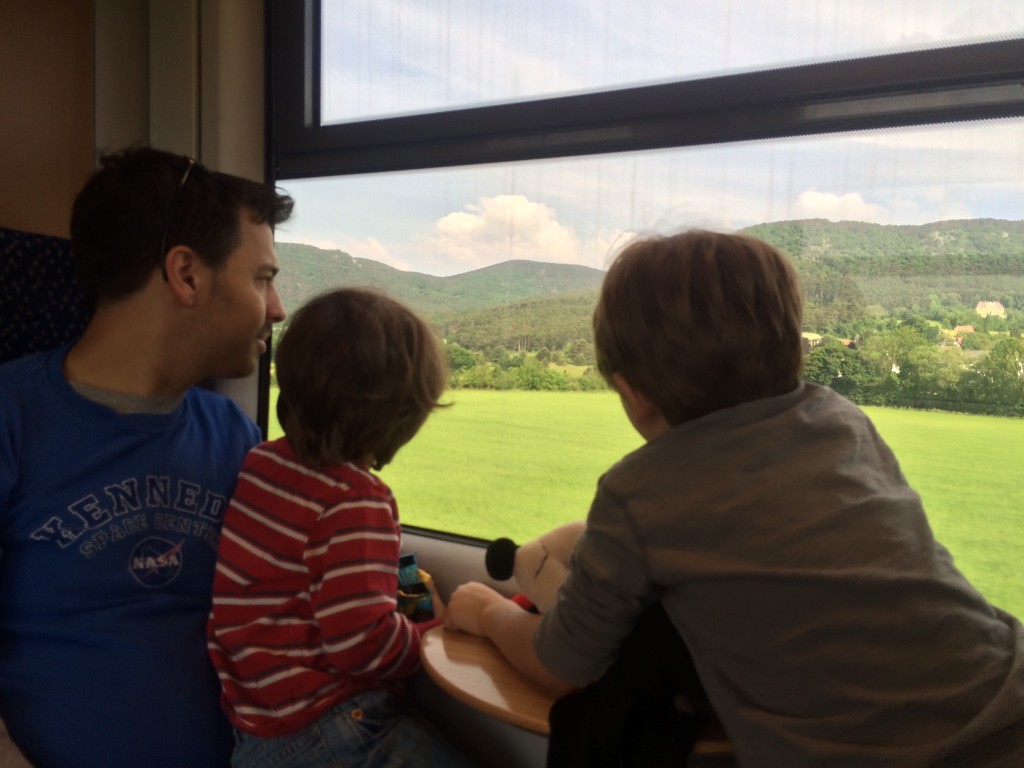 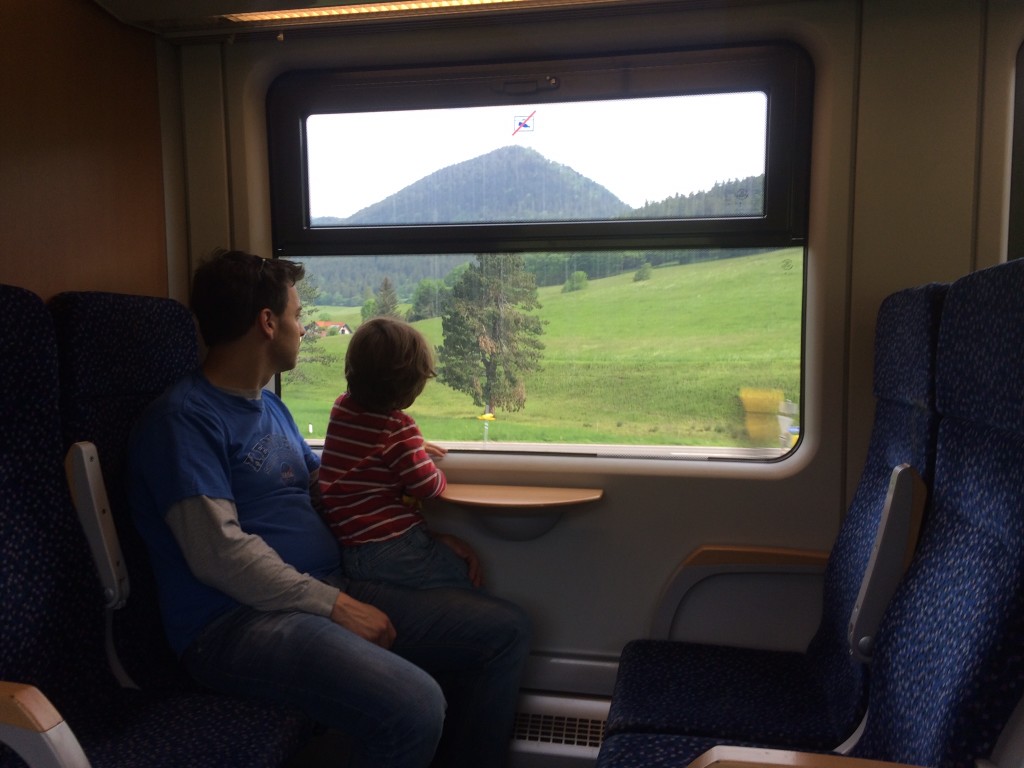 If you make the connections properly, it’s not a long trip — only about 2 hours from the center of Vienna, and quite lovely.  First, you take a big train to one of Vienna’s outlying suburbs, and then a tiny electric train (which honestly feels more like a bus) out into the countryside and to the base of the mountains.  When we arrived, we were scolded a bit for missing the train we had been booked on, and informed that we were lucky to get a spot on a later train, but we did get a spot.  Because of our less than ideal departure from Vienna, we ended up with nearly an hour of downtime until the special Salamander train up the mountain.  (For those keeping track, that means we would get to the top of the mountain 2 full hours later than we had intended.)  But, no worries.  To fill the time, we got some coffee (for Dan & I) and made our way to a nearby salamander-themed playground (for the boys).

At the appointed time, we went back to the train station and got on the Salamander train for the 45 minute ride to the top of the mountain.  At the bottom of the mountain, it was late spring, nearly summer.  Everything was green and lush, the kids didn’t need their jackets, and I was thinking I may have over-prepared for our adventure.  As we ascended, however, things changed quickly.  By halfway up the mountain, our surroundings looked more like early spring than late May.  The trees were just budding, the wildflowers just starting to think about blooming, and, as we ascended, there was more and more snow everywhere.  Rather than being over-prepared, I started to worry that we might be under-dressed in our fleeces and raincoats.

At the top, it felt like early March, rather than late May.  The kids climbed on massive snow piles, and most of the play area at the summit was unusable due to the amount of snow cover.  The wind whipped around us, dark clouds hung overhead, and banks of fog curled around the rocks.  It did not feel like it was nearly summer.  It was winter again. 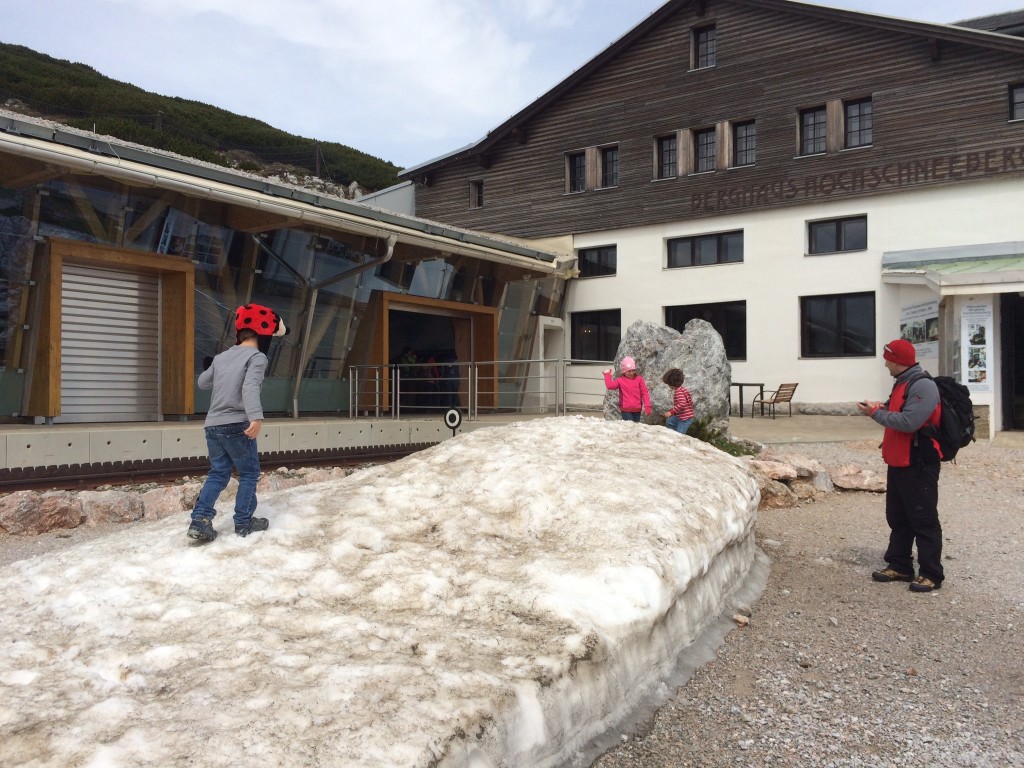 Undaunted, we began our hike.  Our plan was to continue along the path we had started on our previous visit, and then to go further, possibly as far as one of the two peaks.  But though we were (relatively) enthusiastic (me and Dan more than the kids), we just weren’t going to make it that far.  It was cold and windy.  Very cold and windy, and slightly misty.  We had come prepared for a springtime hike, but not for a winter one.

But though we accepted we would not be going as far as we’d planned, we were still going to enjoy our mountain adventure!  So, after about half a mile, we stopped into an Almhutte for a break from the wind and a warm treat (goulash and hot chocolate) before continuing on.  We were not, at all, the only people put hiking, though we may have been the only non-Austrians). 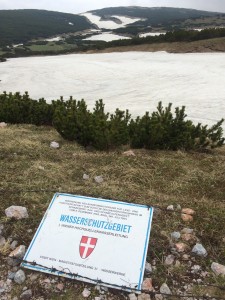 After a bit more hiking, we came upon a fun discovery — one of several sources of Vienna’s lovely drinking water.  I knew that our clean and tasty drinking water came “from the mountains”, but I didn’t realize that one of the sources would be a big pile of snow (presumably over a frozen lake or spring), surrounded in less than intimidating barbed wire, along the side of a wide hiking trail.  (There was a young girl who had climbed down into the snow pictured here, but that seemed like an extraordinarily bad idea, so we wouldn’t let the boys join her.)

But after that, we were pretty much done.  Our vision of an entire afternoon spent hiking several miles was overly ambitious given the conditions (or at least due to our level of preparation).  We were just thwarted by the cold and the wind … and the fact that it was basically still winter up there.  And though we enjoyed our colder-than-expected hike on the mountaintop, we definitely learned that late spring is still a bit early to hike in the high Alps.  On the bright side, as it turned out, my morning miscalculation didn’t really cost us any precious mountain time (because we wouldn’t have stayed longer anyway, and we got to be there in the “warmest” part of the day, relatively speaking).  In the end, it was another adventure, and another learning experience, and I think we’ll save our next mountain hike for summer. 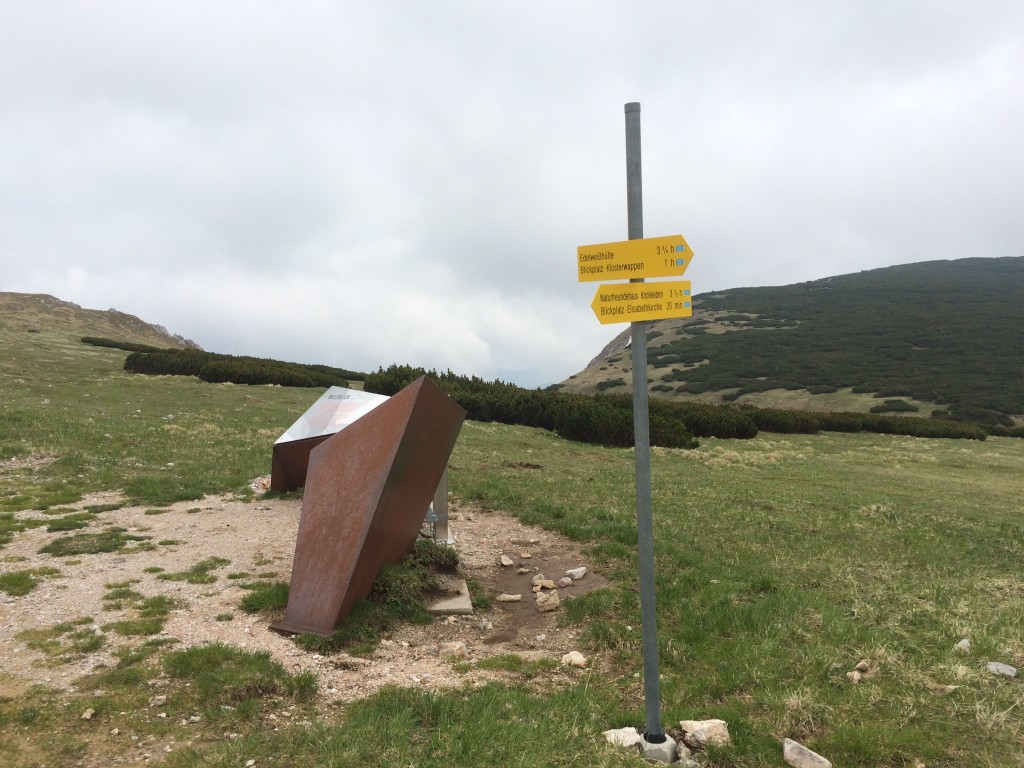 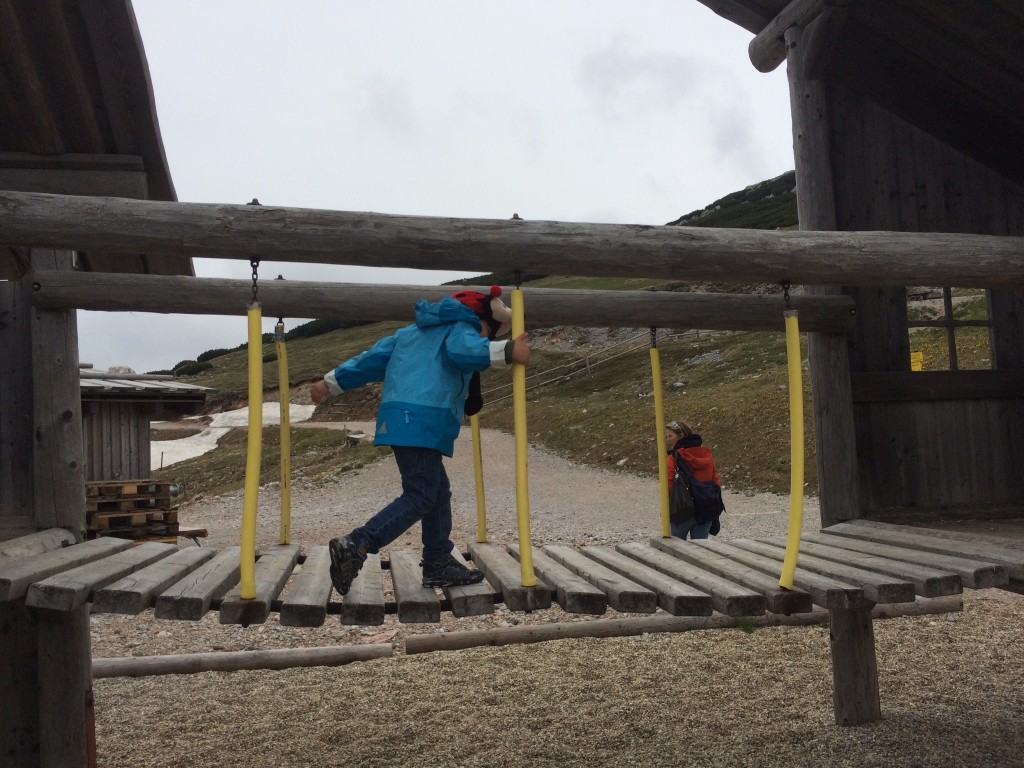