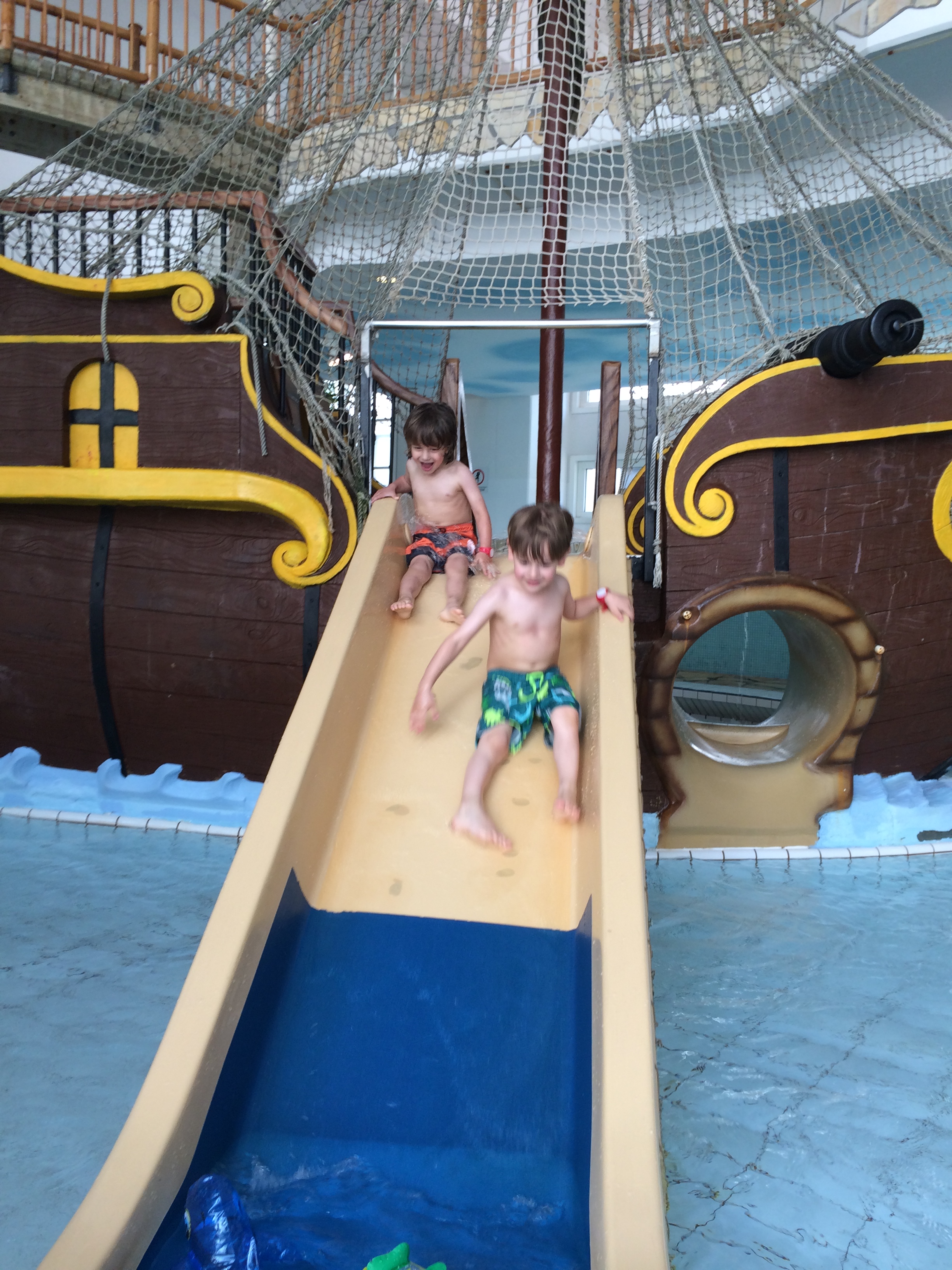 We finally managed to string enough healthy days together to go to the wave pool to celebrate B’s birthday — 16 days after the big day.  When you just turned 6, and you have to wait for 16 whole days to celebrate your birthday while your brother, dad and mom are getting better but you’re feeling fine, it’s pretty tough to be patient and reasonable about it, I think.  But B did great.  He did get frustrated and cry and say a few angry things to me the third time we had to reschedule, but I completely understand (and I’m honestly glad to see he’s not TOO grown for that up yet). 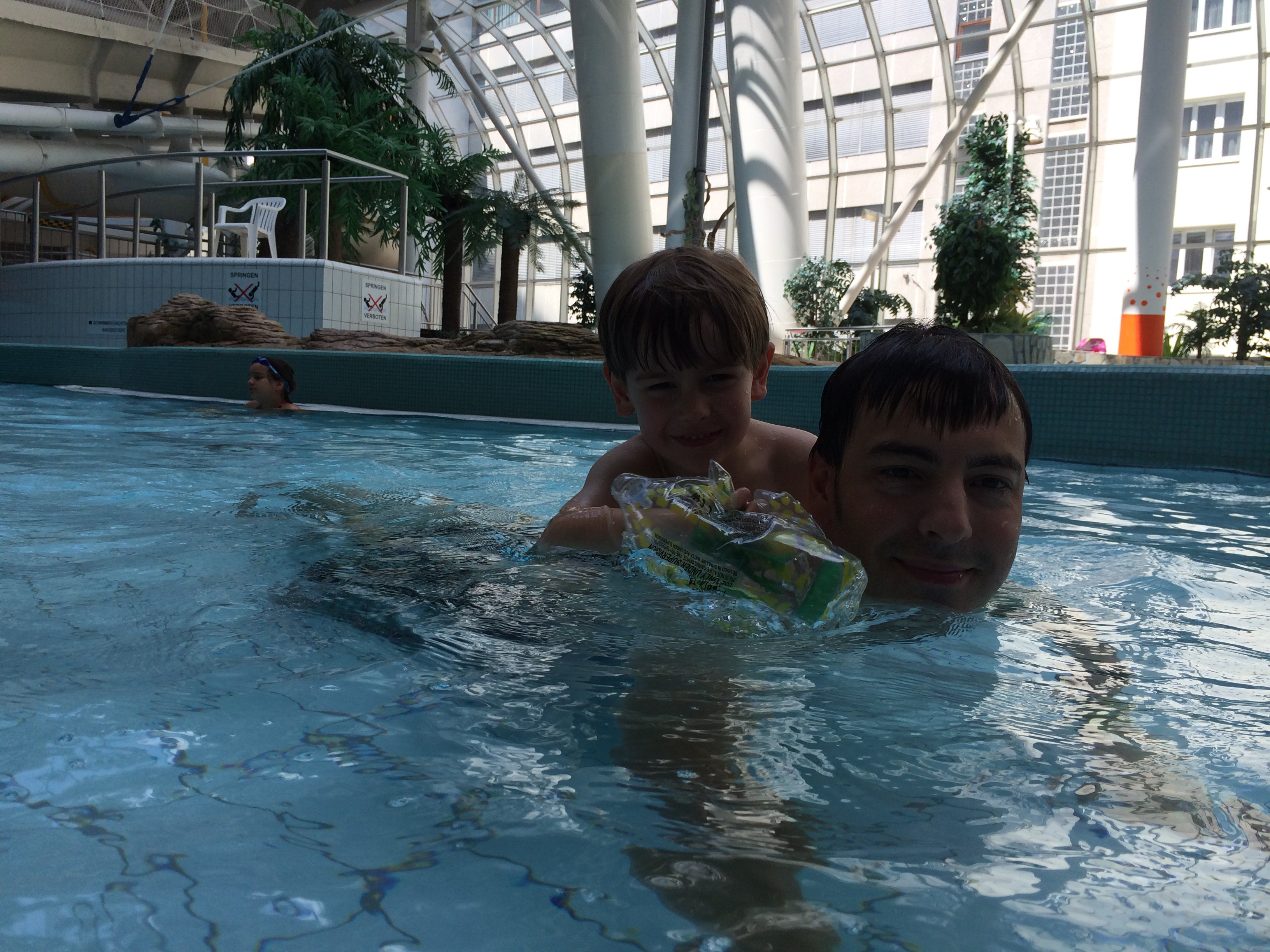 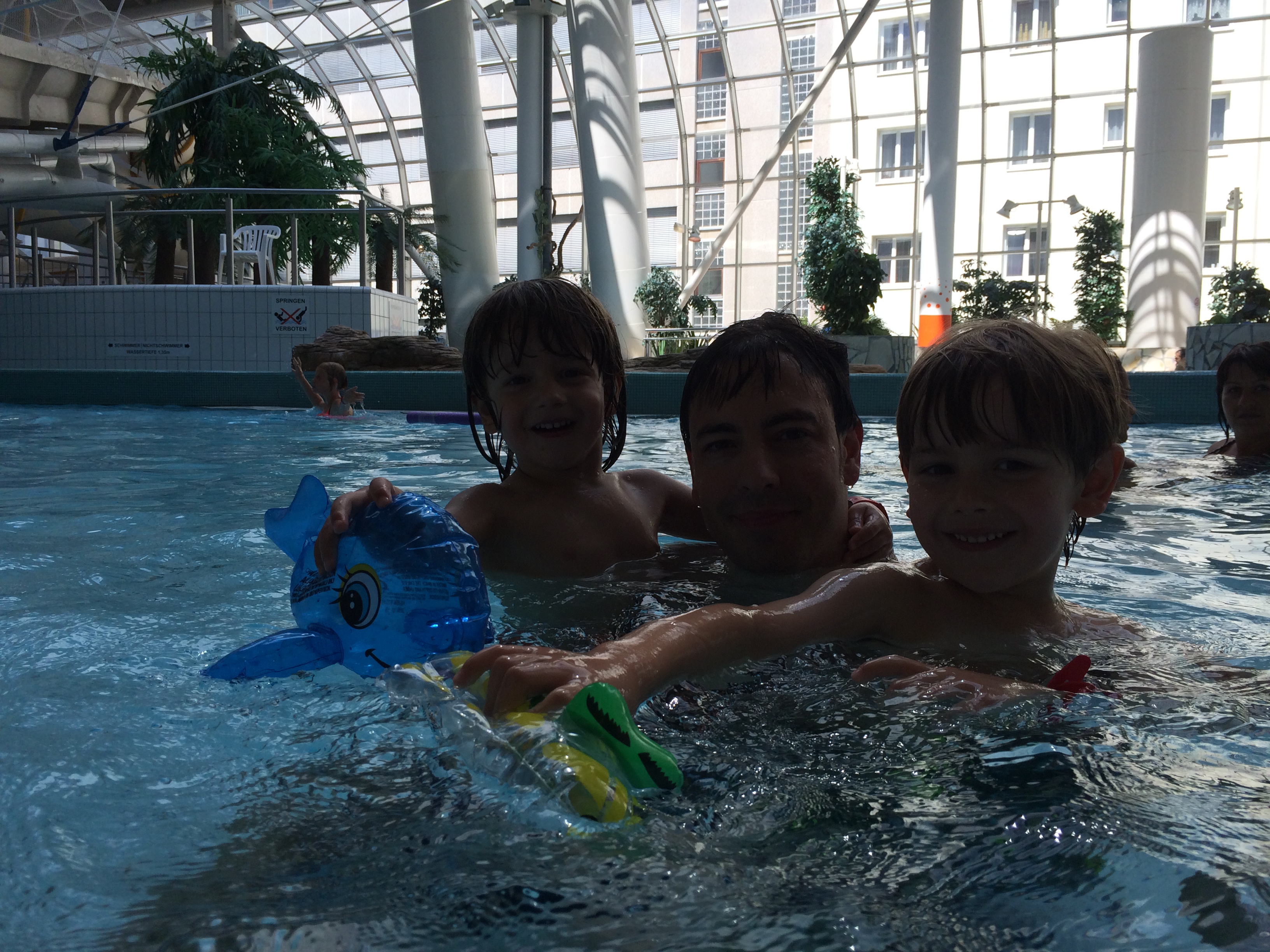 Our first summer here, we bought the kids an inflatable wading pool for use on our terrace.  I can no longer remember what motivated the purchase, but, in retrospect, we should have realized that it would have been better in theory than in practice. 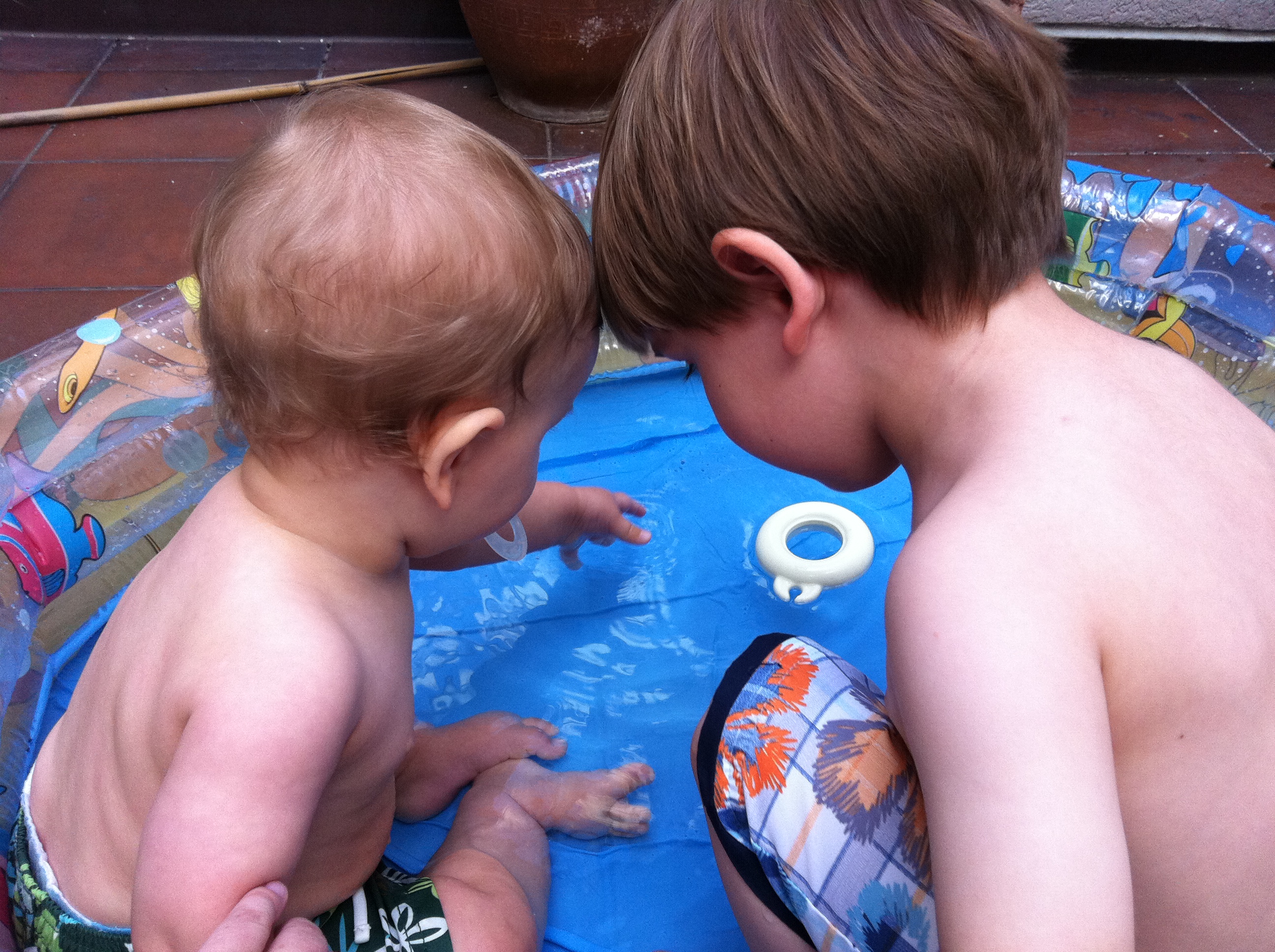 That first summer, it caused more stress for me than I had anticipated.  In addition to having to blow it up myself (always on a very hot day, of course — the best kind for such an activity), I then had to fill it by hand with a pitcher, taking dozens of trips back and forth between the kitchen sink and the pool on the terrace.  At this point, the kids were naturally interested in what I was doing, so in addition to trying not to spill the water, I had to try to wrangle both kids in order to keep them in the house and out of the pool while I was filling it.  (Liam, at this point, was not yet walking, and I could not have left him in or near the pool for even a moment while I walked back and forth.)  When I would finally get the pool full of too-cold water, coax the kids into swimsuits and get us all out there, I was exhausted.  Then, I had to keep a hand on Liam the whole time while worrying that B would slip on our slickly wet tile terrace.  And, after we were done, I had to reverse the entire process — kids inside and dried, floor mopped up, and pool drained and emptied so the pigeons didn’t turn it into a massive bird bath overnight.  The kids loved it, I didn’t, and we only got it out a few times that first summer.Such was my trauma at the hands of the paddling pool that we didn’t set it up even once last summer (although I kind of regretted that by the time it was fall).  Yesterday was hot here once again, so I bravely decided to take on the paddling pool challenge once again. 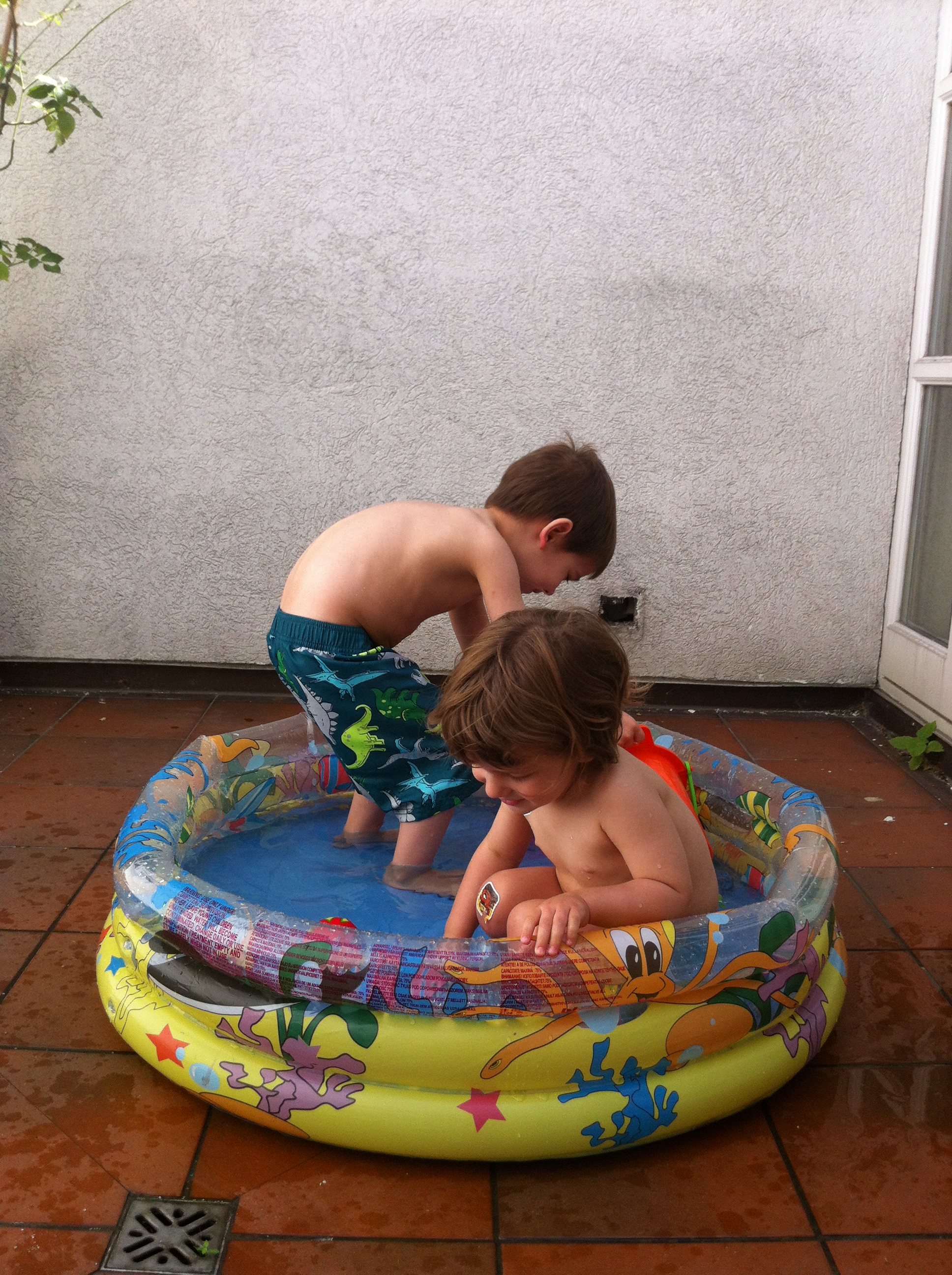 It’s as much of a pain to set up as ever — I had to inflate it, and then carry each pitcher of water (I needed over 20 to get a reasonable amount into the pool) from the kitchen to the terrace, trying not to drip on the hardwood floor.  But, the kids are a little older, so the distraction I provided with the tv kept them from discovering my plans for a few minutes, and even after they did, simply asking them to give me a few minutes to get it set up actually worked (more or less).  But, once I got it set up, it was an entirely more pleasant experience this time around.  The kids actually participated in getting dressed, and they helped me find and collect the toys that they wanted.  Once I got them in, they mostly wanted to pour water on each other and splash like crazy.  At first, I tried to get them to keep the water IN the pool (I was a little too bitter from carrying it all from the kitchen to watch it go down the drain so quickly), but then I simply told them I was done filling the pool for the day, so they could splash as much as they liked as long as they didn’t expect a refill.  It became not so much “playing in the paddling pool” but rather “gradually emptying the paddling pool”, but that was fine with me.  (It also made for less emptying for me to do later!) 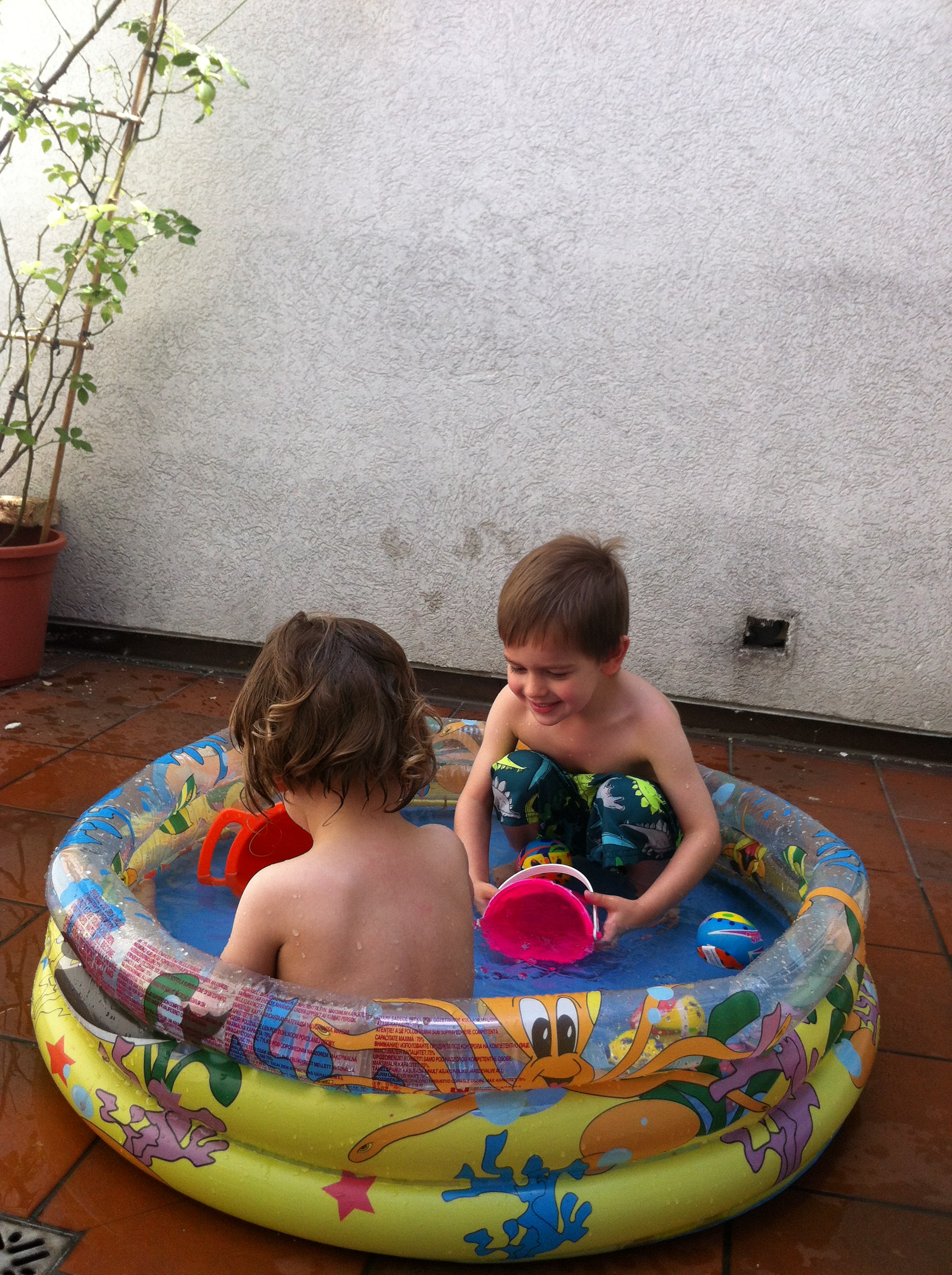 It was glorious.  They played together, splashed like crazy, got water everywhere, and I got to sit *in a chair* and watch them.  Other than retrieving a few wayward toys that came near me, they needed almost no intervention on my part.  They played for an hour, and had a great time, and only came in when they got chilly.  (Actually, only Liam got cold — B would have stayed in longer.)  They had fun and cooled off, and I got to just sit and watch them play.  It was fantastic, and made every trip from the kitchen with the pitcher totally worth it.  I think the paddling pool will return again soon.