Last week, on one of the few spring-like days we’ve had (and that was back when it was actually still winter), Liam and I went to the playground while B was at school.  We were happy and excited to be outdoors, playing in the sunshine and fresh air.  It was a relief for the cabin fever I hadn’t even realized we’d been feeling.

We definitely weren’t alone in that idea — the playground was overrun with kids.  There were a few mothers there with their little ones, but there were also two separate kindergarten classes there to play.  It was a zoo.  Kids everywhere, running, climbing, screaming, playing, falling down. 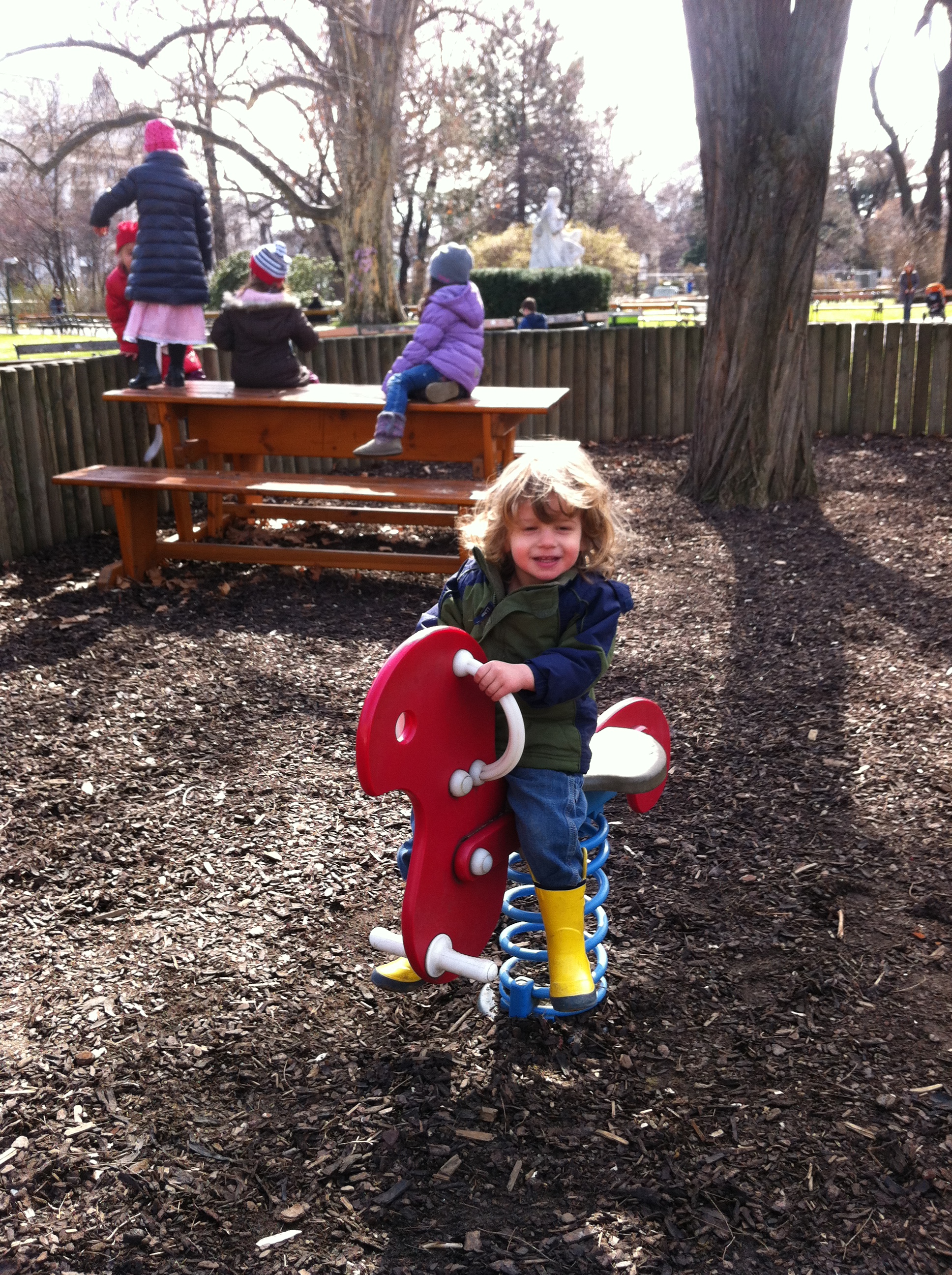 Liam took it in stride and leapt into the fray.  He didn’t hesitate, just climbed the ladder to the slide, investigated the status of the baby swing (occupied), and ran off to play on some of the bouncing/rocking animals.

One little girl, a few years older than Liam (also probably older than B) saw him and wanted to play.  She followed him for a moment, and then invited him to ride on the seesaw with her.  He did.  They both smiled.  He grinned and said, “Hi!  I Liam!”  She giggled and looked at me, so I encouraged him to introduce himself in German, so he smiled again and turned to her to say, “Heisse Liam!” 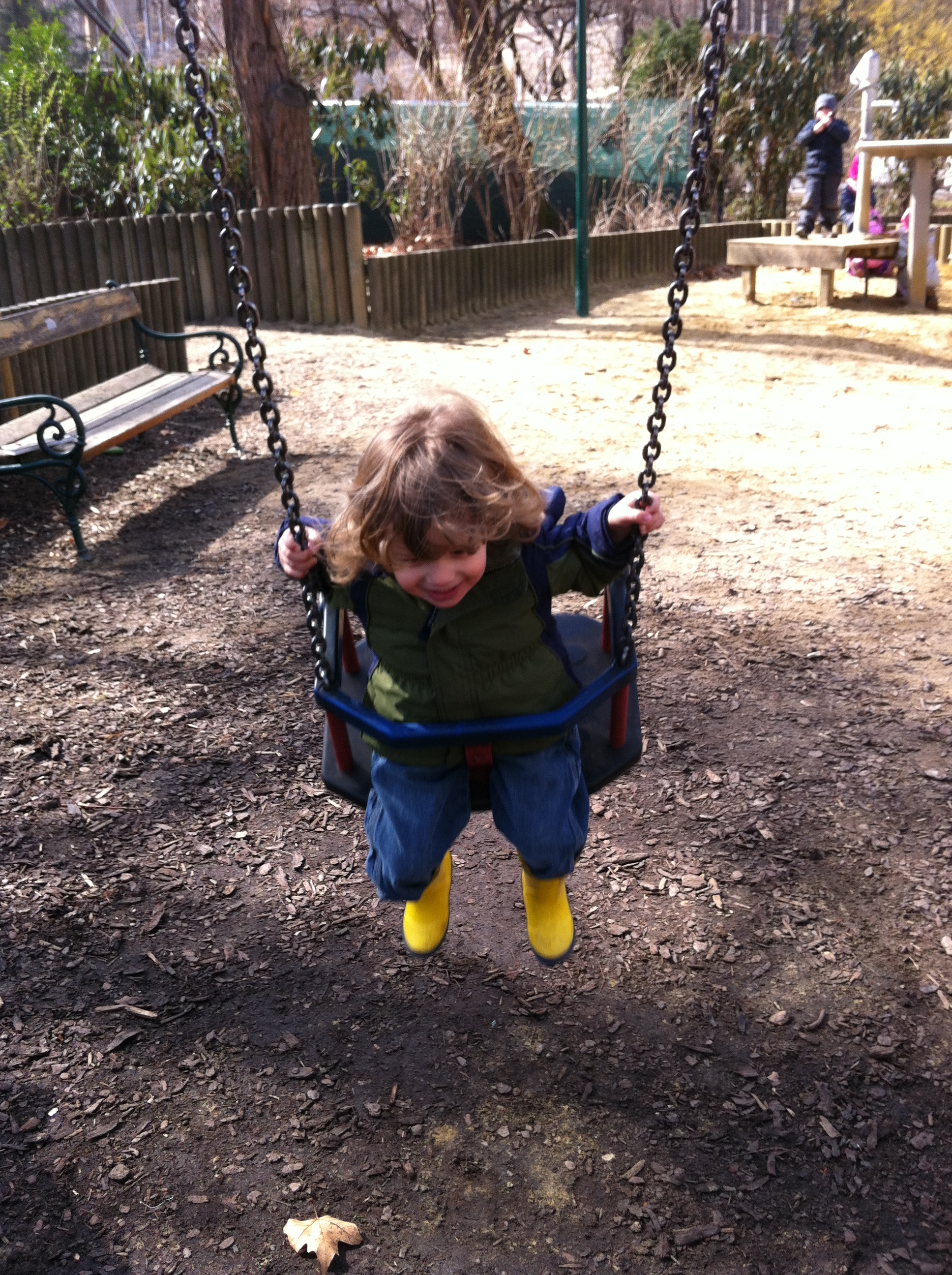 She didn’t respond, but they smiled and giggled and played for a few minutes, until she ran off to join another friend from her school group.  We wandered off to swing in the baby swing (now unoccupied) until we had to go home.

I am always so thrilled to experience Liam’s enthusiasm for life, his boldness, his confidence.  He is so brave, so open and easygoing.  He loves to connect with people, and is unfazed by bumps in the road.  It’s shocking and amazing to see him use German, although he’s yet to actually be taught.  (He seems to absorb it straight out of the air, by osmosis, although I imagine it’s more likely true that he’s picking it up from Benjamin . . . which is actually equally cool.)  He’s such a great little guy.  He inspires me.  I learn from him to embrace more and worry less . . . except when I’m worrying exactly about him being so fearless.

We’ve found a place, but we can’t move in yet.  We haven’t gotten our relocation grant, so we can’t go buy a washer/dryer or any other major purchase for the new place.  Dan’s work doesn’t start until next Tuesday.  So . . . . we’re on vacation!  We really can’t do much that’s productive right now — we might be able to later in the week, but right now, we’re waiting for a bunch of other people to do things, so we decided to have our first really leisurely day since we’ve been here. 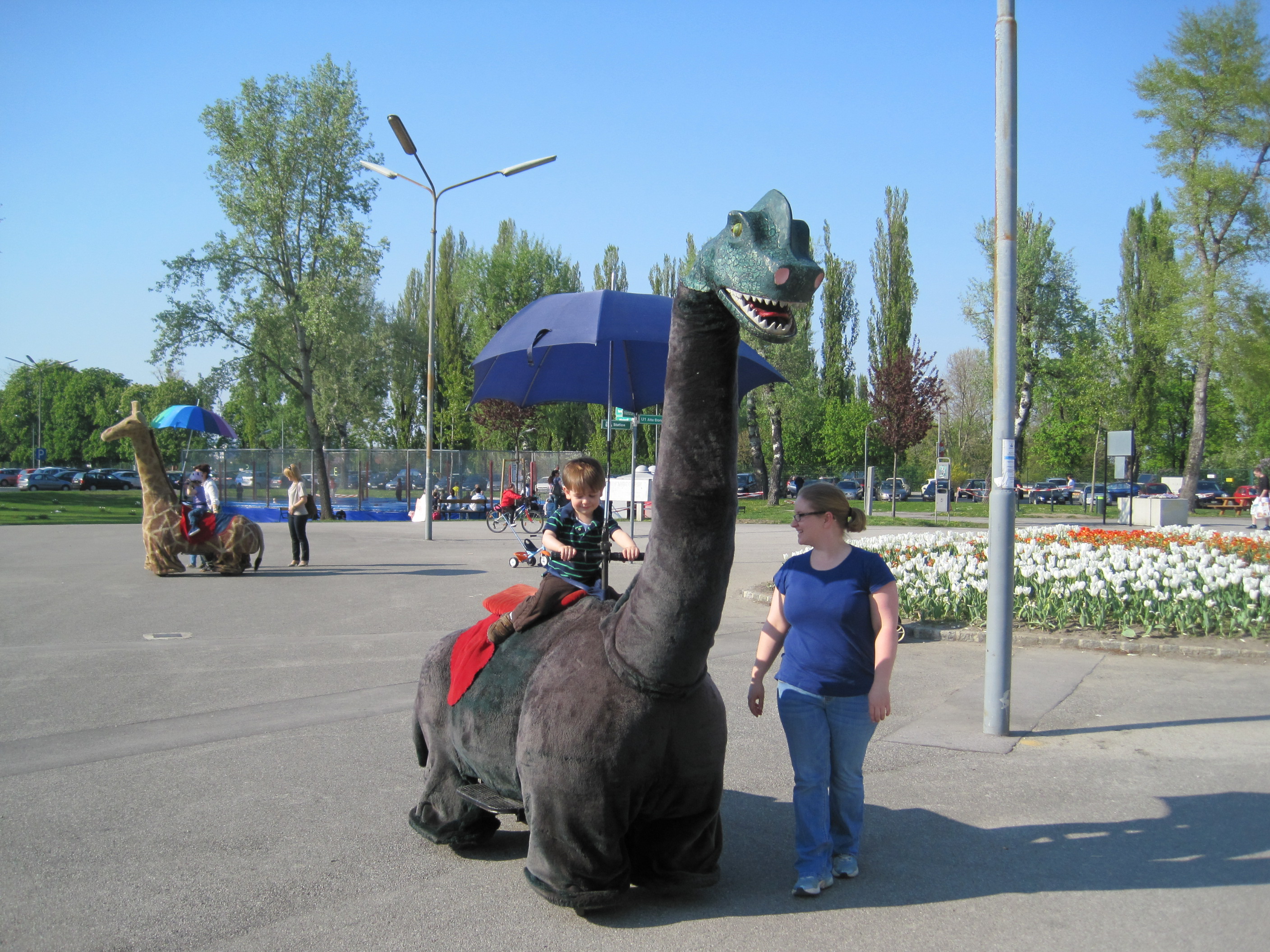 We took the boys and went to the Donaupark, which is a huge park near the Danube.  It’s got a lot of open green space — people were playing games, sunbathing, picnicking.  It also has playground equipment for little (and not so little) kids — the typical stuff we have at home and then way crazier stuff that you couldn’t get away with at home for fear of lawsuits.  It has at least two skate parks, lots of table tennis and trampolines.  It has a little train that takes a 20 minute trip around the park, and these huge mechanical animals that kids can ride around on.  We rode the train, helped B ride the animals and play on the playground equipment and just generally enjoyed a beautiful day out with our kids.  We had lunch out, and we stopped for gelato on the way home.  Benjamin had his very first bus ride today, too!  It was a great day. 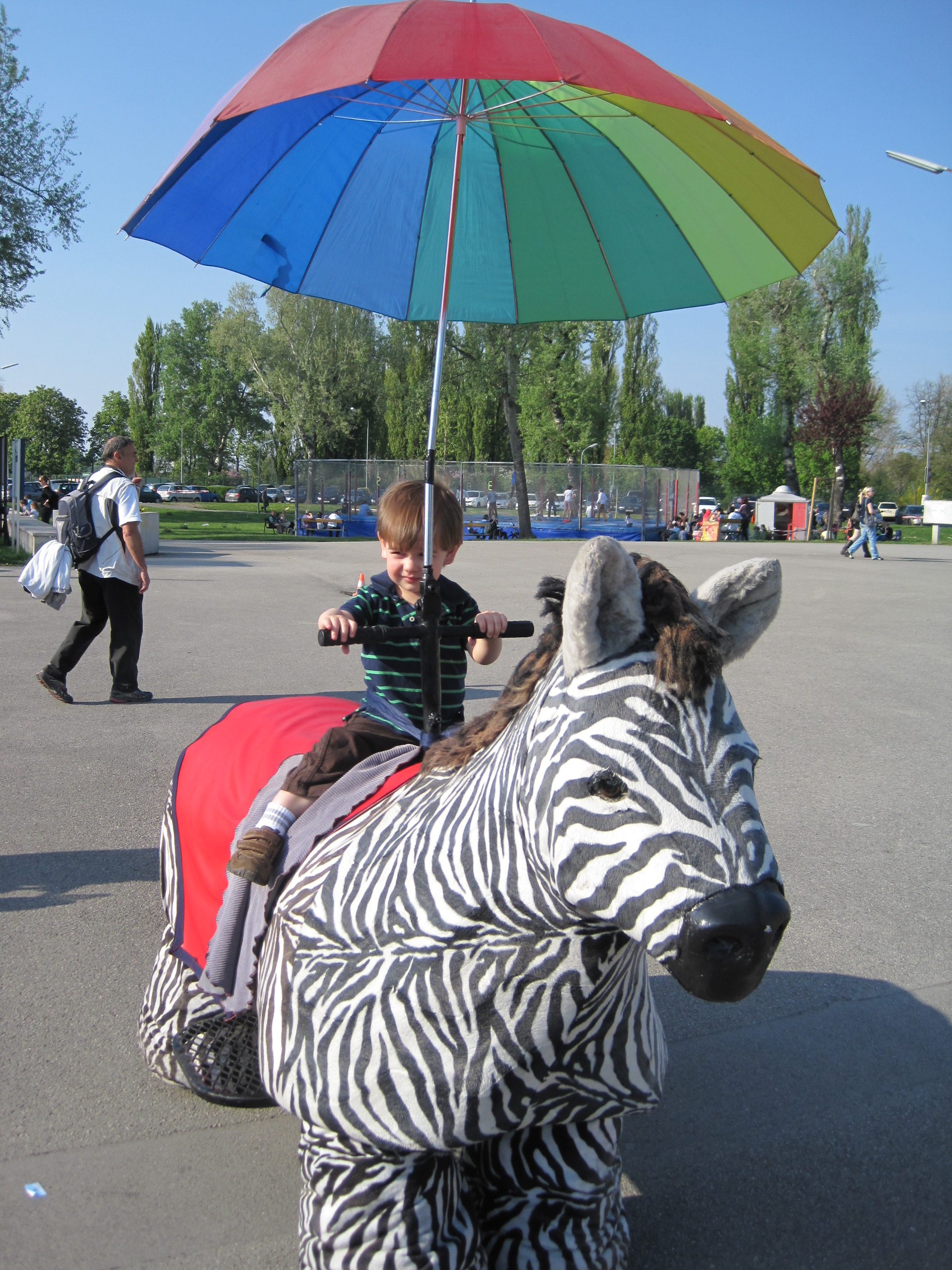 As part of being out all afternoon, I needed to feed Liam.  I’m still nursing him, and I’ve never really gotten the hang of doing it in public.  At home, I would have been really stressed about it, and maybe even avoided it altogether.  If I had done it at all, I would have made sure I was somewhere out of the way and as inconspicuous as possible.  Today, when we were out, and Liam got hungry, I just found a mostly shady spot on a bench, got him all situated and covered up, and fed him.  No big deal.  It wasn’t until we were finishing up that I realized that it was significantly less stressful than usual for me.  Is it the European mentality that nursing a baby in public is less of an issue?  Or just because no one knows me here, so I’m not worried about being embarrassed in front of someone I know?  Maybe a little of both.  But thinking about it, the single biggest difference is that at home, I would have been embarrassed simply by not being slick at nursing in public — the fact that I’m awkward makes me really self conscious.  Even if nothing “went wrong”, I want to seem cooler than that — I really want to seem like one of those moms that has it all together. 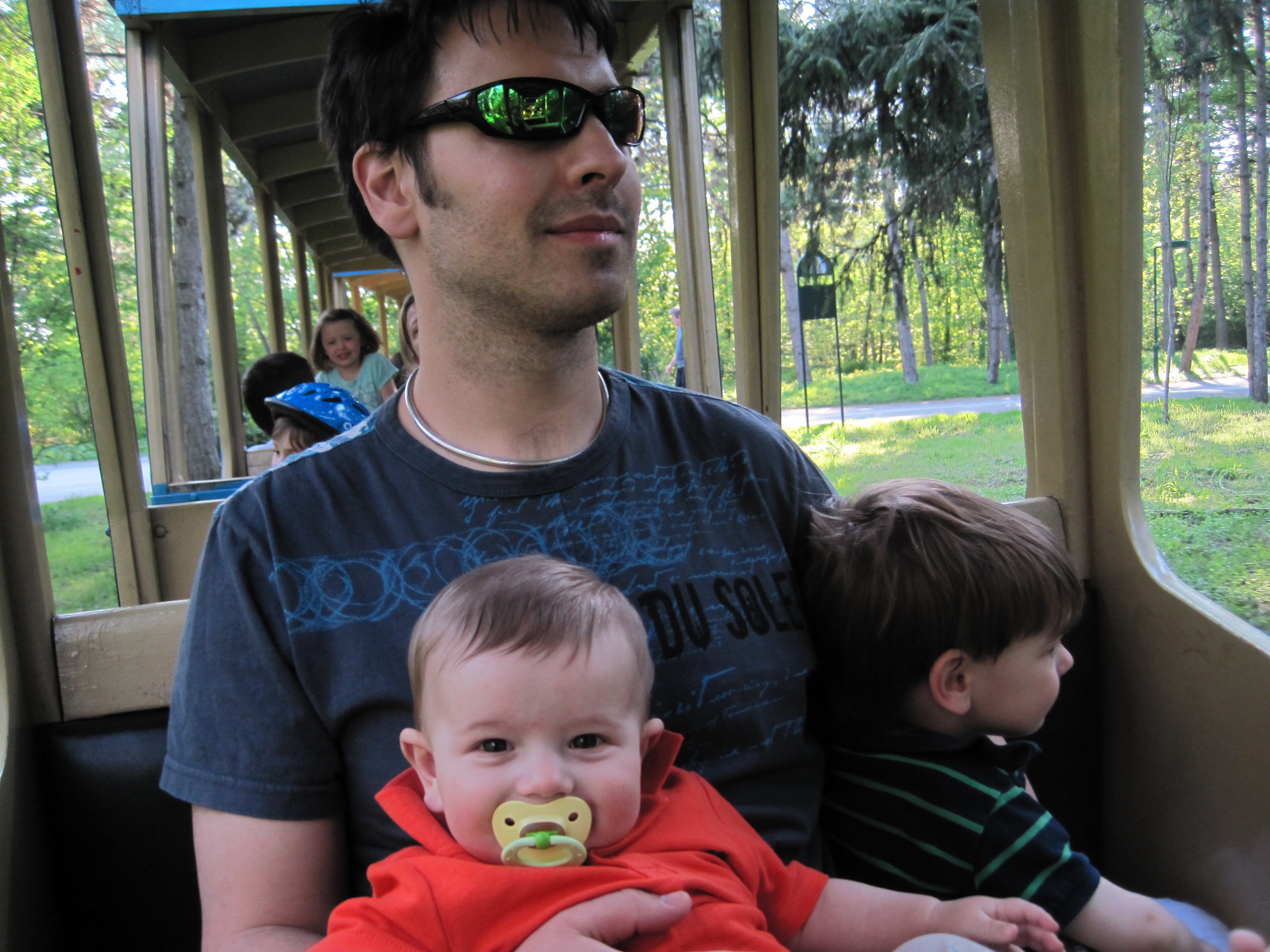 I’m having to let go of that.  I so do not have it all together.  I don’t think there’s any way to take something like this on and still keep the facade of “togetherness”.  I’ve really had to send my ego on vacation these past couple of weeks.  I don’t speak the language, I don’t know the etiquette here of riding the trains or the buses, I’m living out of my suitcase (which means I don’t have many clothes or most of my “mom supplies”).  But, it’s forcing me to really focus on what’s important, rather than “doing it right”.  I might be ordering lunch in broken English/German/gesticulation, but Benjamin is getting fed.  I might be standing on the wrong part of the train, totally blocking everyone from getting in or out, but we’re all ON the train.  I might have spilled half of the milk I bought from Starbucks for B as soon as I got to my seat on the plane (and delayed the plane backing away from the gate while I got it cleaned up) but he had milk to drink before his bedtime, even at 38,000 feet.  And today, feeding Liam peacefully in the park, it was nice to realize how easy it could be.  Worrying about doing it “right” has been making it hard.  Today, I wasn’t “super slick international travelling mom”, but I had a great day.