Having some time on my own is wonderful.  I’ve already stopped calling it “free time” because it’s been very busy time, mostly full of very exciting things like folding laundry and sweeping the floor.  I actually am having trouble figuring out how to fit all of the things I want to do with this time into the time that I have.  My to-do list is longer than the hours I have available.  Eventually, I’ll figure out what is important enough to get my attention and what will need to be put off (but it’s a little overwhelming while I figure it out, because everything feels like IT MUST GET DONE).

Oddly, though, I am feeling overwhelmed and aimless at the same time.  While I have a ton of stuff to do, some exciting, some mundane, some essential, there’s also an odd sensation of drifting.  I have lots to do, but I’m totally on my own while I do it.  Instead of weaving every moment of my day around the whims, tantrums and snack schedules of two little people, I’m independent.  That’s liberating, but also lacking in definition and direction.

While it’s nice having time to myself, it’s also lonely, and it feels a little . . . useless, maybe?  After being “on” as a mom every minute, and filling my time with menial but important tasks like folding laundry and changing diapers, running errands at the mall or sitting down for a solitary coffee feels pleasant (in that there’s less poop involved) but a little . . . superfluous.  It’s a strange sensation.  I’m not working, I’m not taking care of the kids, I’m not devoting every minute to the household . . . so what AM I doing?

So, I think I’m starting to get it.  I think this is what I’ve heard other expat “trailing spouses” talk about.  There is some sadness, a slight loneliness, a vague panic of being on my own.  It’s not being “alone” — after 5 years of almost never having solitude, I find the alone part of it very peaceful.  It’s a kind of pressure, an expectation.  Now that I actually have time to myself, what am I going to make of it?  What am I going to do?  I have no excuses for not squeezing every bit out of being here now … but what does that even mean?

So, I’m a little overwhelmed.  On the one hand, I don’t want to spend every minute that the kids are in school folding laundry and going to the grocery store.  On the other hand, I want to feel useful.  This is a whole new world for me.  I think it’s going to take a while to sort it all out.

This weekend was a long weekend for us — Dan had today off of work. So, naturally, by about 10:00 this morning, we still had a ton of things on our “to do” list, and I was already exhausted.  When we have long weekends, I have a bad habit of trying to cram too much stuff in — that extra day seems to stretch on eternally in my mind’s eye when I’m planning, but I find it usually just leaves me more exhausted than I am in a regular weekend, and frustrated, too, because I had this fanciful idea of what would be accomplished that didn’t come to pass.

First thing this morning, we had a doctor’s appointment for a heart screening for Liam . . . which was a bit of a fiasco because the hospital had lost our appointment, which no one actually told us, so we had to wait in the emergency room for 45 minutes while they figured things out, only to be sent to the cardiology department to be lectured on the fact that we needed an appointment (which is when we figured out what must have happened).  This is one of those things that is infinitely more challenging about living in a country where you don’t speak the language:  these missed connections happen much more often, and when they do, they’re less likely to be resolved easily.  Chances our, the incorrect appointment might well have been our misunderstanding in the first place, but we find that rather than explain the problem to us (that they have no record of our appointment) everyone passes the problem of explaining along to the next person, leaving us irritated (why are we waiting in the ER for 45 minutes when we had an appointment?) and confused (why is everyone being so weird?).  We did finally get to see the cardiologist, and Liam’s heart is just fine (good to know) but after starting and our day, bright and early, with a heaping dose of confusion and frustration, I just did not have it in me to go forward with our plans for the day.

So, I gave up.  We were supposed to take the kids to the zoo to meet a friend, but I just could not get excited about it.  I was feeling really tired, and already daunted by the big week we have ahead of us.  All I wanted to do was sit, read and have a cup of tea.  So, that’s what I did. Benjamin was already excited about going to the zoo, so Dan took the boys.  It seemed like a crazy idea when we first thought of it, and I felt preemptively guilty (could I *really* bring myself to skip a fun day at the zoo with my kids?) but it was GREAT.  I got to relax and take a little time for myself, and the boys had a great time at the zoo with Dan.  They don’t seem scarred by it, and, surprisingly, neither am I.

We still didn’t get a lot of stuff on our list done this weekend, and I’m still pretty worn out.  But tomorrow, when I’m exhausted and trying to get my week back on track, I’ll feel a little better knowing I at least took a stab at being rested for the week.  And the flamingos will be there next time.

We’ve been here just about two and a half months now.  That works out to about 1750 hours (which, really, doesn’t sound like that many).  Today, I took an hour by myself for the first time since we’ve been here.  At home, I used to get a little crazy if I hadn’t had a morning or an afternoon off every week.  The first few weeks we were here I really noticed not having that time for myself, but after a few weeks it became normal to not get a break, so now I’m pretty much used to it (but that’s not to say that I think that’s a good idea).

I always have a hard time going out on my own without my kids.  Even though my days are intense and my kids drive me crazy sometimes, I miss them terribly when we aren’t together and I feel like I’m missing out on the moments they’re spending without me.  But, my nerves have been a bit frayed lately, and I recognize that I need a little “me” time, so I packed up my book and a bottle of water and went out (reluctantly). 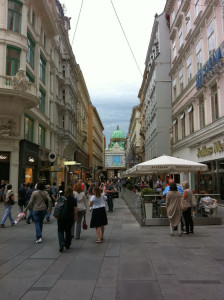 It was marvelous.  I walked down to the Spanish Riding School, ordered a chai at Starbucks (in German!) and sat and read and enjoyed Vienna.  I took a walk, looked at the buildings and saw (literally, for the first time) the beautiful rooftops and statues along them.  I can’t usually look up that high — my attention is focused much closer to the ground.  It was strange for me to realize how much I *don’t* see when I’m out with the kids.  It was great to feel the liberty that comes from moving unencumbered — I could have walked anywhere, gotten on a train, or a bus, or walked into any shop, even one — gasp! — with stairs in the entrance.

Both Dan & I recognize that it’s important for me to take a little time, so now that our lives are settling down a bit, we’re going to be sure it’s a priority every weekend.  I’m sure I’ll still miss the boys when I’m out, but I’m excited to experience Vienna not just as a mom.  I can’t wait to see what I’ll get to see next time.