I have very little aesthetic sense.  I studied Aesthetics as a Philosophy major in college, and I was pretty much terrified the entire time.  My professor once said that my aesthetic sense was only evolved as far as, “me likey; me no likey”.  She was absolutely right.  I enjoy art, but I don’t understand it.  I can’t explain why I like one piece and dislike another one — I just do.  I have no appreciation for technique or sophistication.  And I can’t even begin to differentiate “good” art from “bad” art, nor can I have a reasonable conversation about whether or not that’s even a valid distinction to make.  That being said, there are pieces of art that I enjoy, and artists whose work I admire.  As all art is well beyond my own ability, I can appreciate all of it as an impressive demonstration of a skill I will never have.

Like many of the uncultured art appreciators of the world, my “favorite” artists are the best known.  I like Monet, Van Gogh, Rembrandt and (some) Picasso.  Living in Vienna, and visiting some amazing places that truly appreciate great art (like Rome and Paris), I’ve had the opportunity to see a lot of art that I enjoy, and a lot of art that is relatively famous.  I’m grateful to have had that opportunity, and I’m trying to make a point of seeing more art when I get the chance.  I don’t get the chance all that often.  Between the boys’ school schedule, pickups, drop offs, errands, and everything else in life, I don’t often get to see a lot of art.

But, when the Belvedere hosted a Monet exhibit this past winter, I convinced a friend to join me and we went to see it.

I’ve always loved Monet.  The colors are beautiful, and his art just makes a lot of sense to me (my theory is that because my vision is pretty poor, his art looks how everything looks to me).  I know that his waterlilies are among his most famous paintings, but I’ve always been more enthusiastic about his London paintings (they were some of the first paintings I ever really loved).  We were lucky enough to get to see two of them in person, which was really fantastic.  The exhibit also showed some of his seascapes, and a bit of work by other artists who were inspired by Monet.  I thoroughly enjoyed (most) of it.

I’m still ignorant when it comes to art, but I’m really glad we went to see the exhibit.  (I feel very slightly less uncultured now.)  We finished up our morning with a stroll around the frozen gardens of the Belvedere Palace.  It was a great day, and an enriching experience, regardless of my lack of aesthetic. 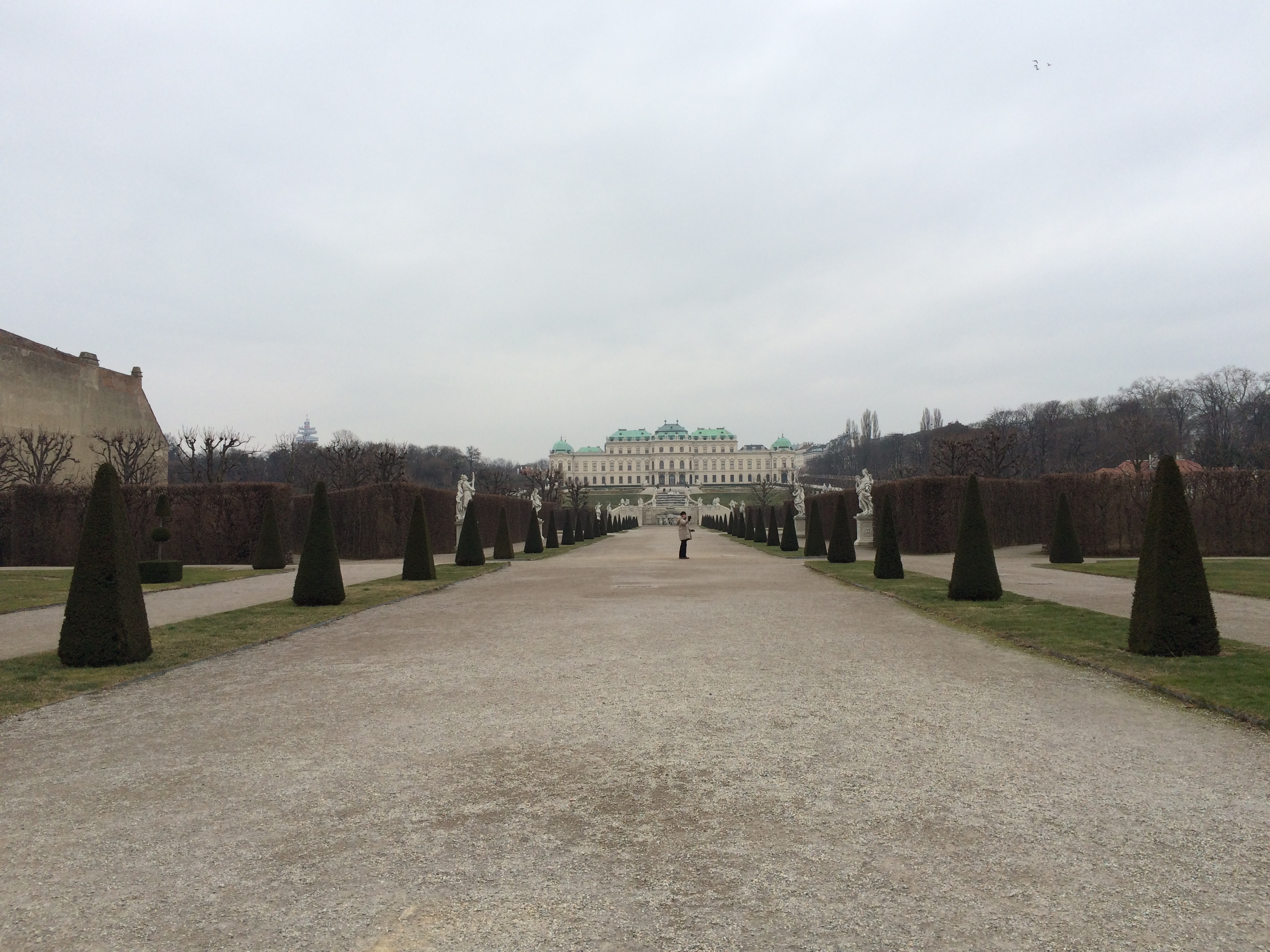 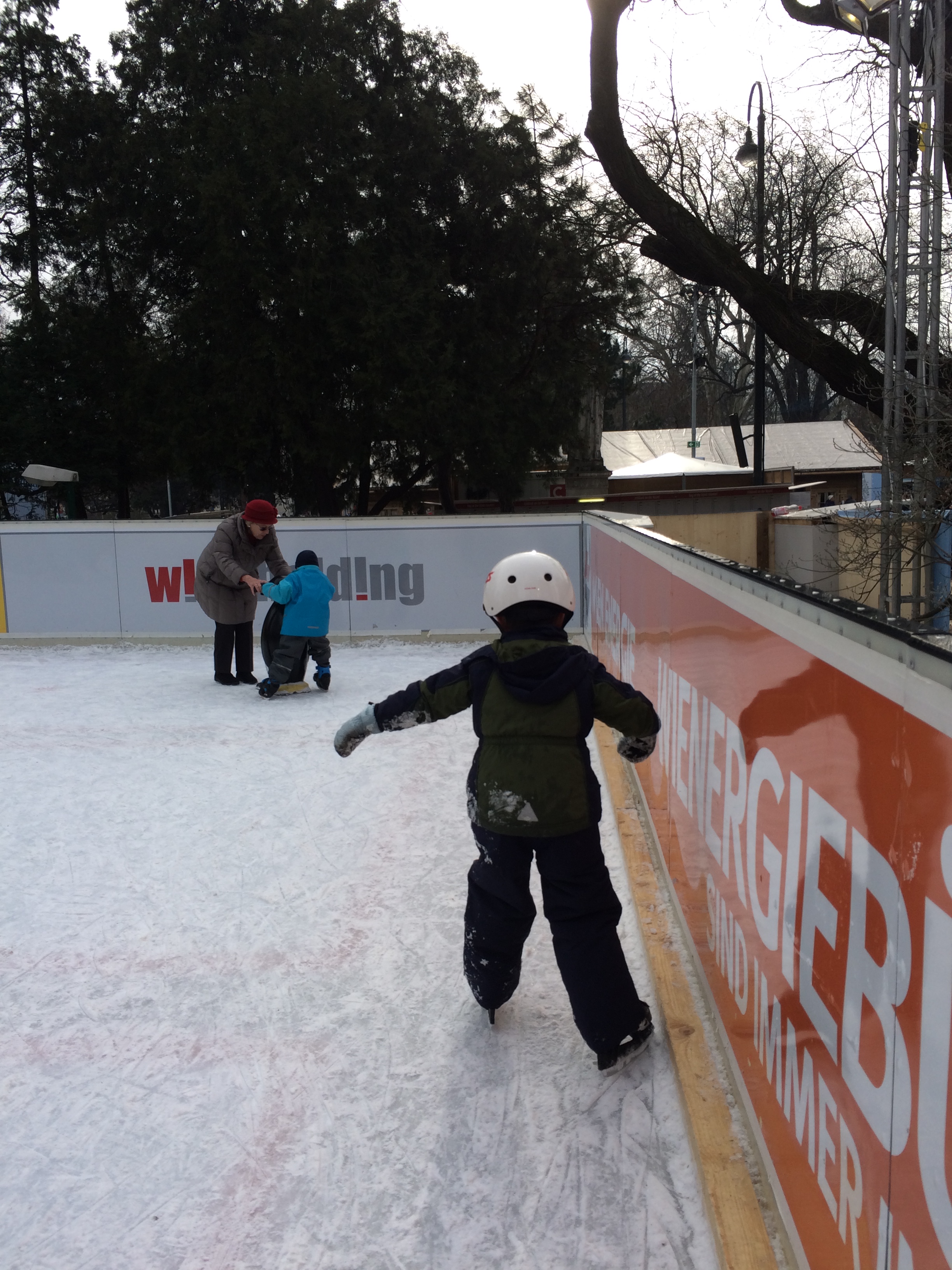 It’s become a fun family tradition — every January and February find us strapping on our skates and enjoying the ice rinks over at the Rathaus.  I don’t know that our minimal amount of time on the ice has made us any better at skating, but I think we’ve gotten better at the process of GOING skating over the years.  While we used to find the process of getting the kids in their winter gear, walking over to the Rathaus (which isn’t far), renting the skates, inevitably returning them because something didn’t fit properly, and finally waddling over to the ice so completely overwhelming that often, by the time we got ON to the ice, we were all nearly ready to go home.

We’ve gotten better at it.

We’ve grown accustomed to outfitting the kids in their winter gear — we do it every day.  The walk over to the Rathaus no longer seems arduous — we walk further in our winter gear all the time.  We’ve gotten better at figuring out skate and helmet sizes, plus we’ve gotten a lot better at communicating our needs in German.  We’re accomplished at inching across the wooden floorboards over to the ice.  And, I think we probably HAVE gotten better on the ice (at least on average) because though Liam still needs a “penguin” to be able to skate, Benjamin no longer needs one (though he still sometimes enjoys one).  We can skate around the children’s area pretty skillfully (without falling down, most of the time) and I even make the journey around the more advanced area from time to time without causing any major catastrophes.

This year, Benjamin and I went over together one morning when he had a day off from school, and we even managed to go around the advanced area together, which was a first for B, and a lot of fun for both of us (though a little scary for me).

And also for the first time this year, they constructed a massive “Vienna Skyliner” tower — an 80 meter tall rotating tower that lifted us up to the height of the Rathaus and gave us an amazing view of Vienna.  (It was an amazing structure for something temporary — it was only there for the duration of the skating at the Rathaus.)  It was created to celebrate the 150th anniversary of the Ringstrasse — the road that runs around the center of Vienna.  From the top of the tower, we could see many of Vienna’s major landmarks — St. Stephen’s, the Hofburg, the Volksgarten, plus Dan’s work and our apartment.  We also got an amazing view of the top of the Rathaus — something I never expected to see at eye level! 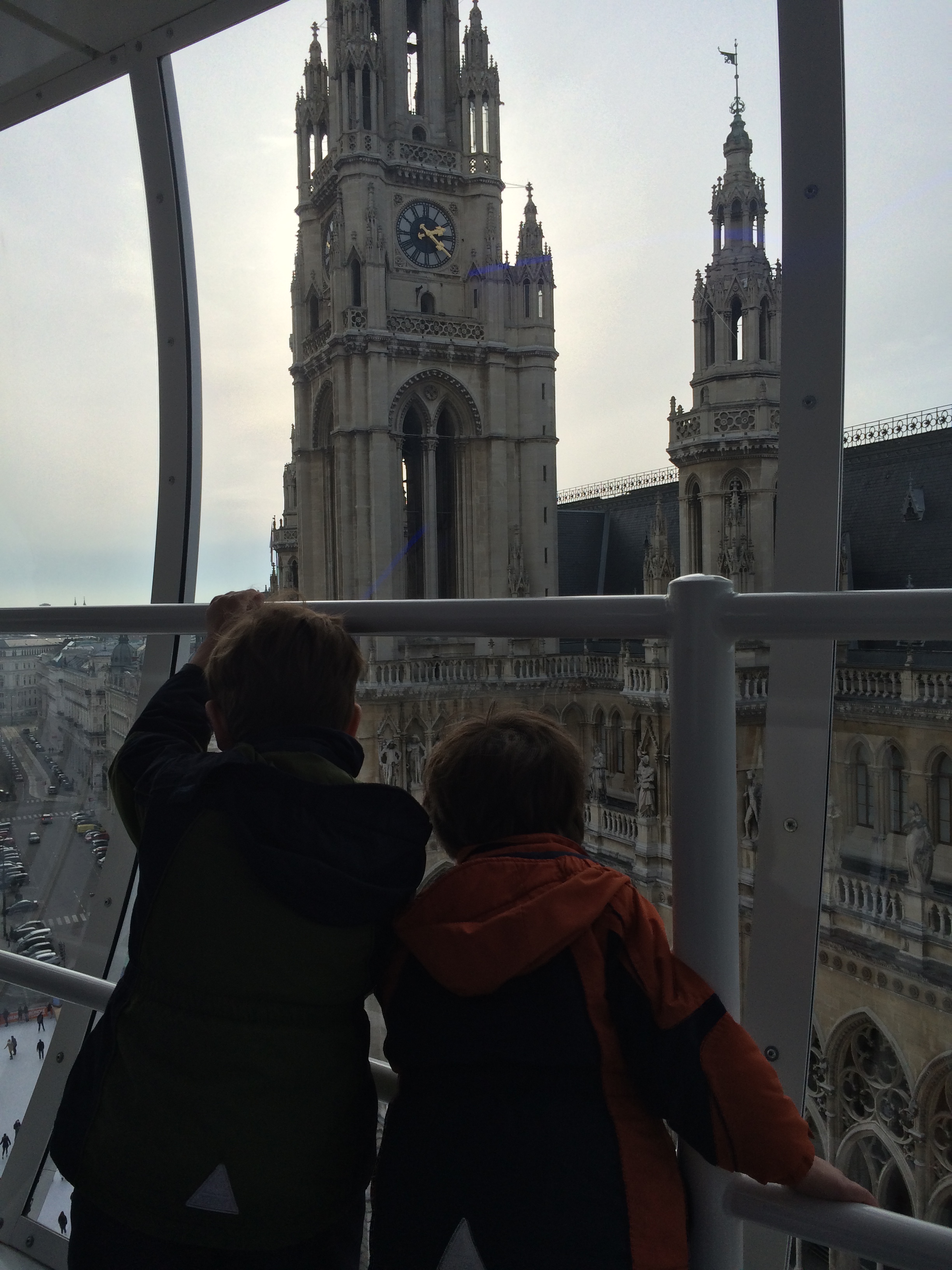 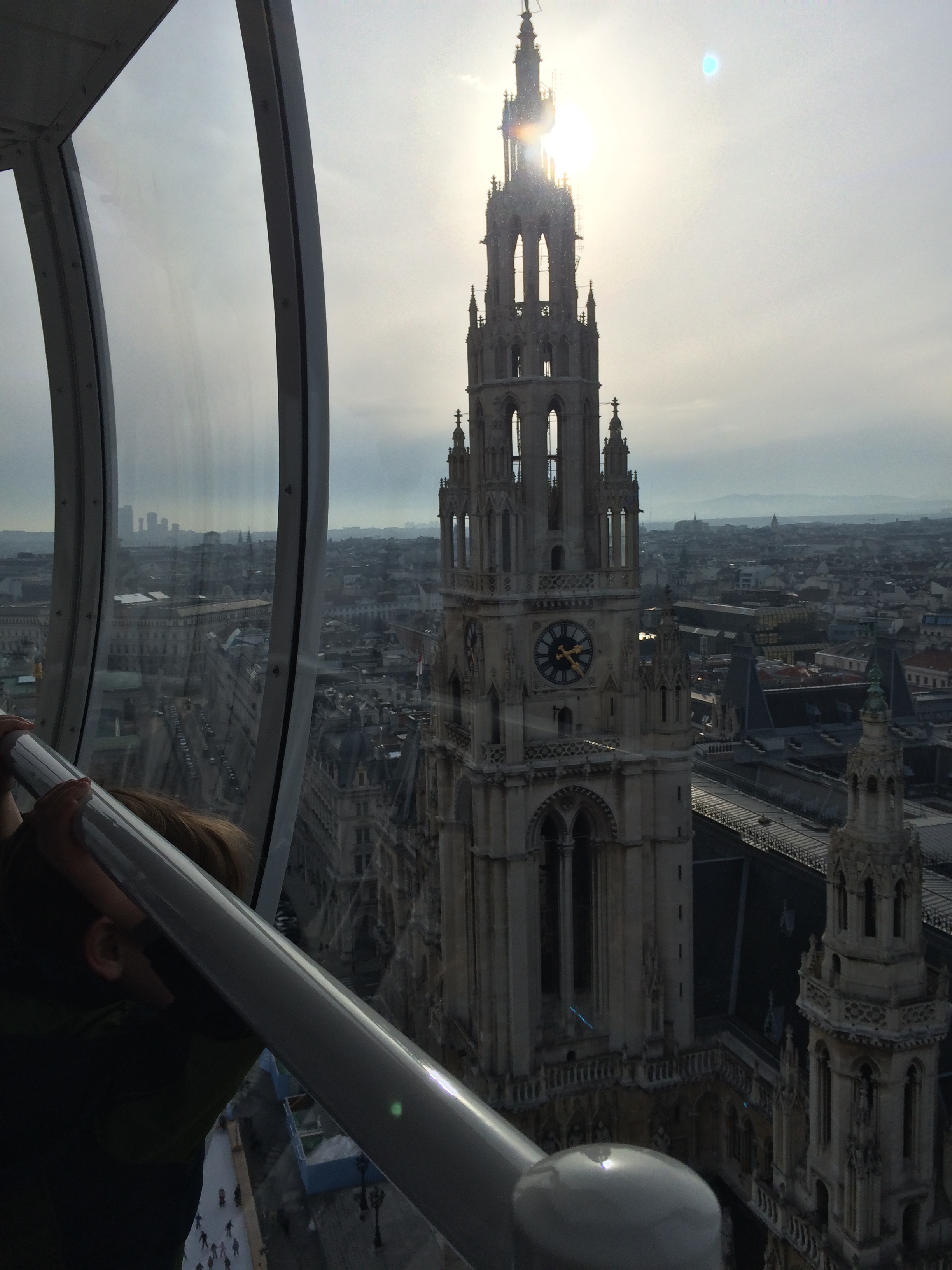 In the dark and cold and short days of winter in Vienna, I’ve come to really look forward to our annual trips to the skating rink.  It’s a particularly refreshing activity to think about right now, when we’re finishing up our fourth (or is it fifth?) week of 35+ degree temperatures (that’s 95+ish for everyone at home, and it’s very unusual for Vienna).  Thinking back to days of having to bundle up to enjoy the ice is somewhat comforting, because I know those days will come again.  And when they do, we’ll be back over at the Rathaus, enjoying the ice again. 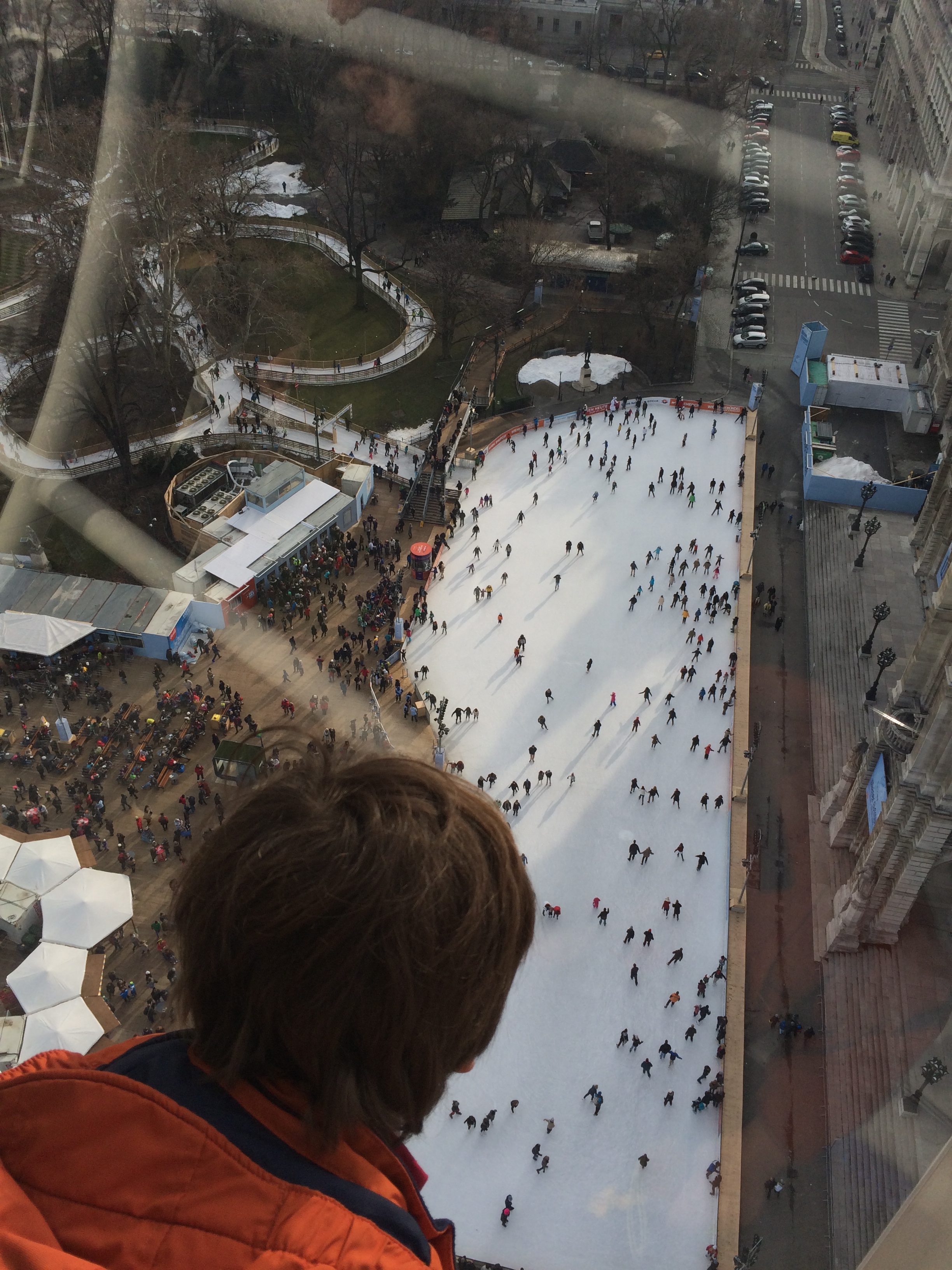 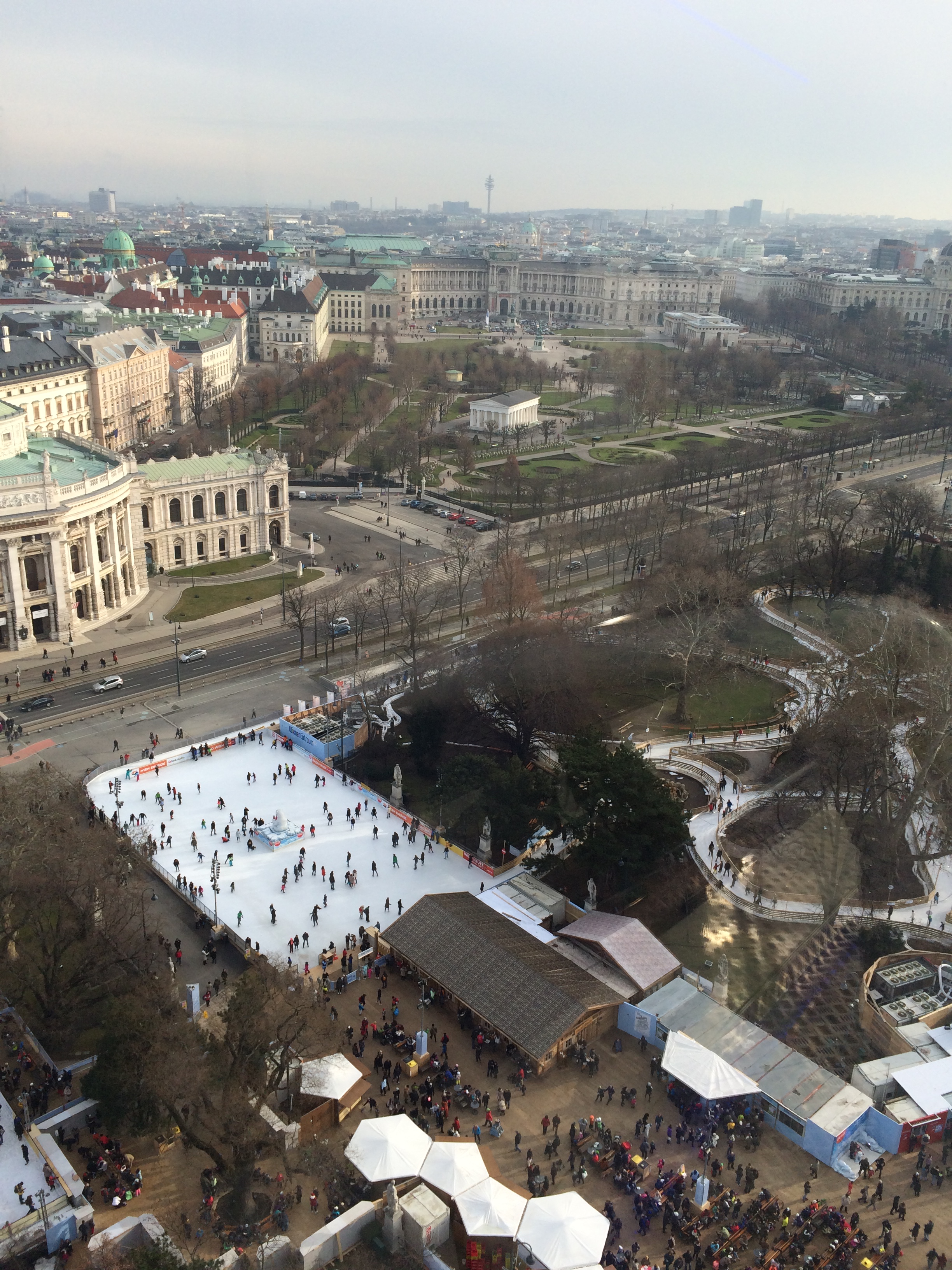 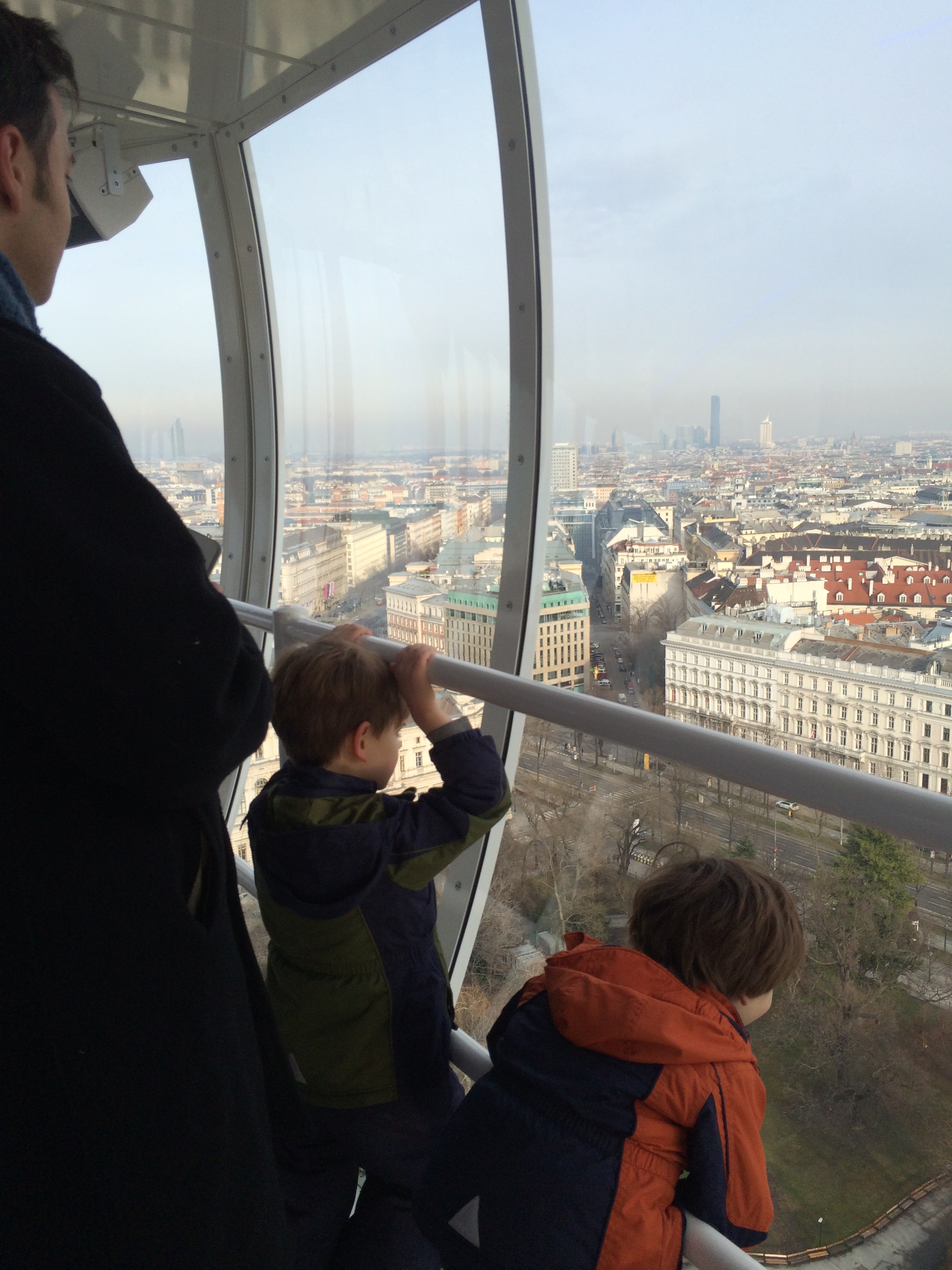 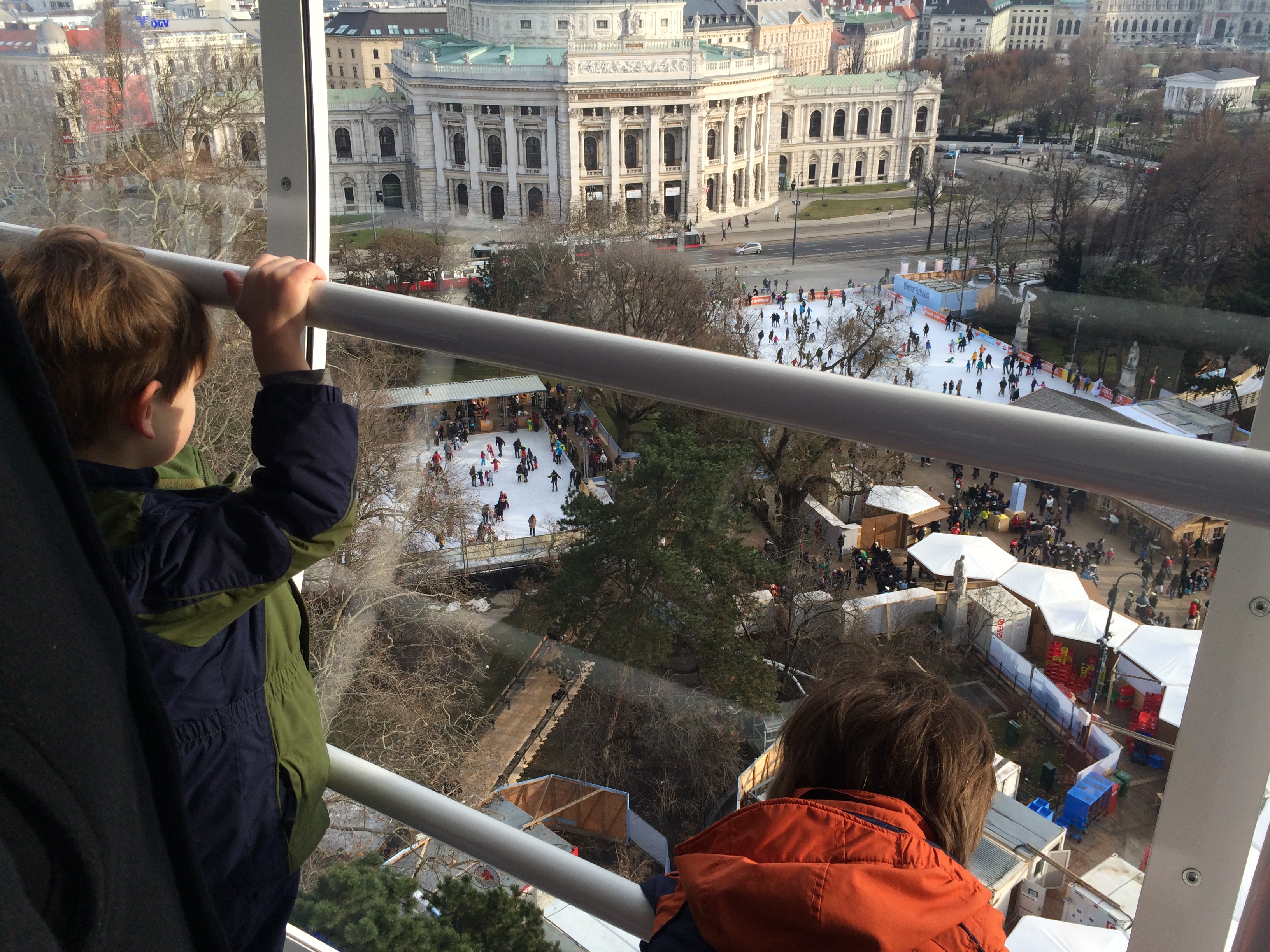 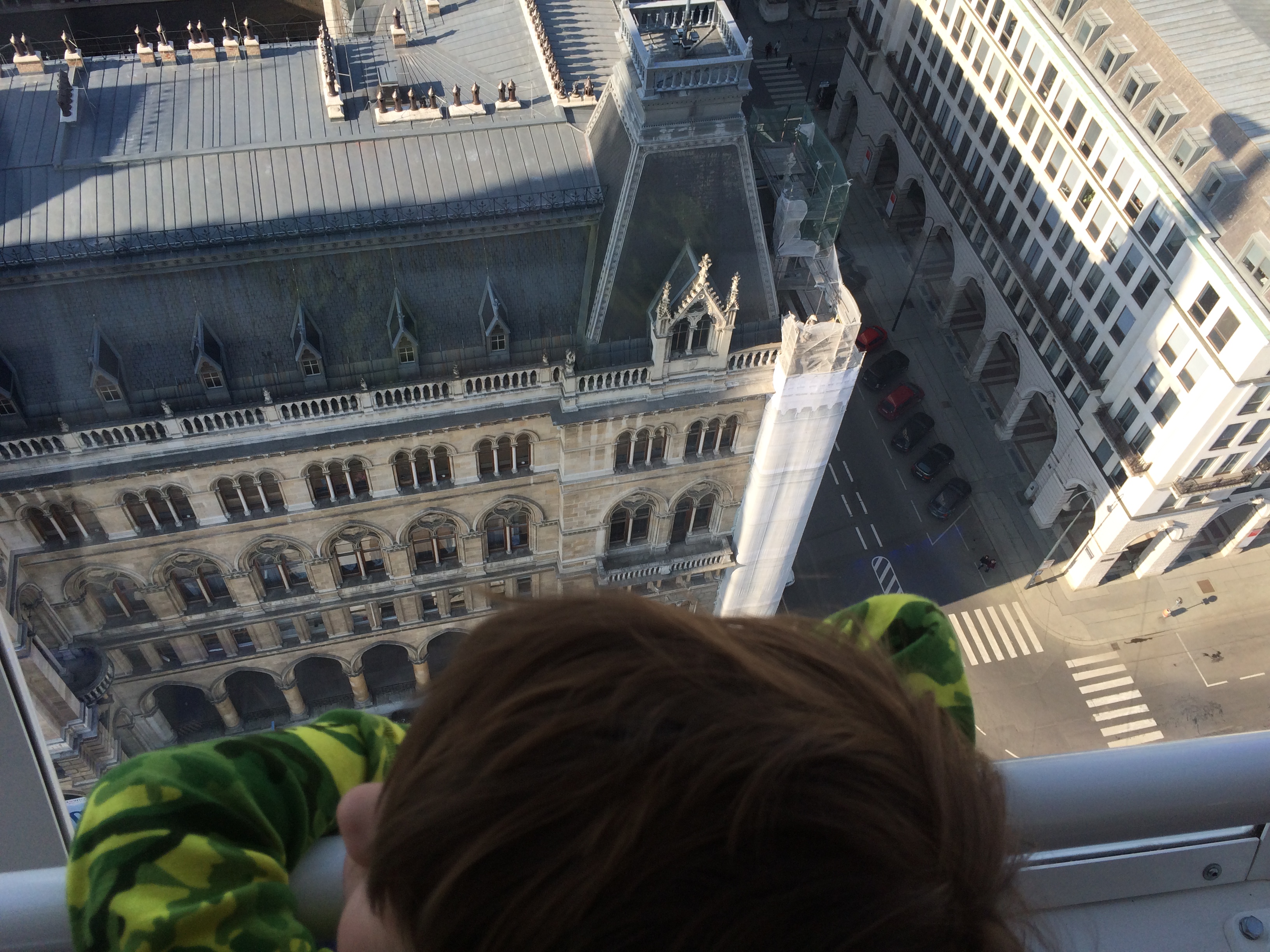