A few thoughts and notes about our most recent trip to Paris:

* The last time we went to Paris, I was surprised at how beautiful it was.  It’s one of those things, like hearing how green Ireland is, that you hear so often that you figure it can’t live up to the hype.  But, it does.  And then, if anything, it was even more beautiful this time of year.  The roses have bloomed, the twilight lasts for hours, and the color of the Seine during the long dusk is amazing. 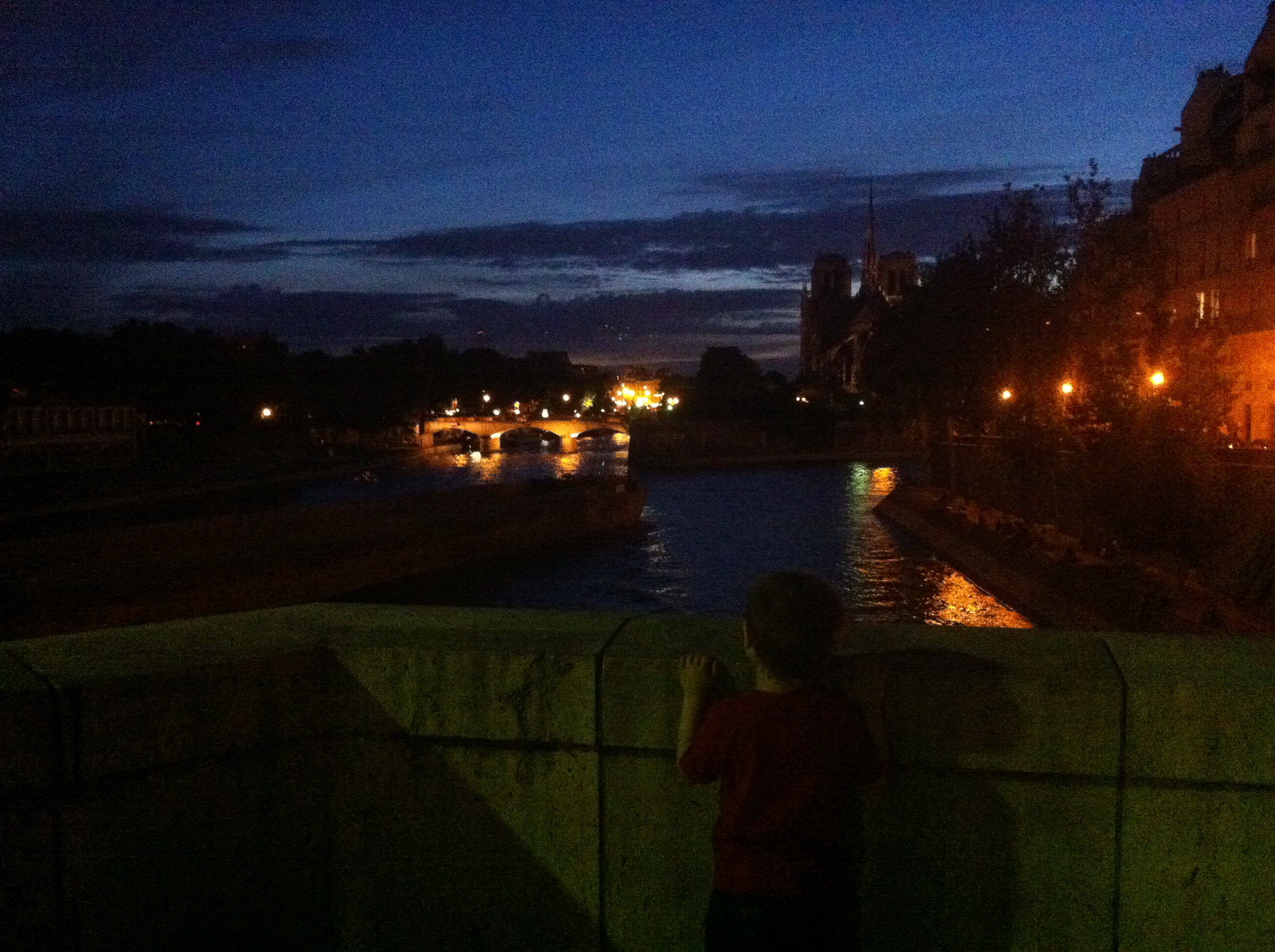 * Beignets!  How did I live for 36 years without ever eating one?  My life is now complete (or would be, if I lived across the street from the bakery that made the ones we ate in Paris).  Last visit, we swooned over the macaroons, this time, the beignets.  Our current theory is that we might have to try every bakery in France to determine what their particular speciality is.  Ah, France!

* For the first time ever in our air travel with the kids, we checked our stroller (complete with gliding board) at the ticket counter, instead of at the gate.  We were pleasantly surprised to find it easier to move through the airport without it (except that Vienna now has a separate security line for people with strollers, which would have been nice).  So often, a gate-checked stroller isn’t returned until baggage claim anyway, so it didn’t make any difference on the arrival end, and it made us feel even less encumbered by stuff prior to departure.  Not sure we’ll do it every time, but it’s probably something we’ll try again.  (The kids did have their Trunkis to ride instead.  Not sure I would have ditched the stroller otherwise.)

* We bypassed the stroller hell of the Paris Metro by taking a cab from the airport to our apartment.  I didn’t have a concrete plan for getting back, though, other than the phone book.  But, lo & behold, I found an advertisement for a taxi service, listing reasonable fares, attached to a street light near our apartment.  In what might have been a major lapse in judgement, I contacted them.  And it turned out perfectly.  Our driver, Raphael, showed up right on time and got us quickly, comfortably & safely to the airport (for a good fare — a few Euro less than it cost us to go the other direction).  It was a gamble that paid off.  (Info: http://www.navette770.com/ ).  I would absolutely use them again. 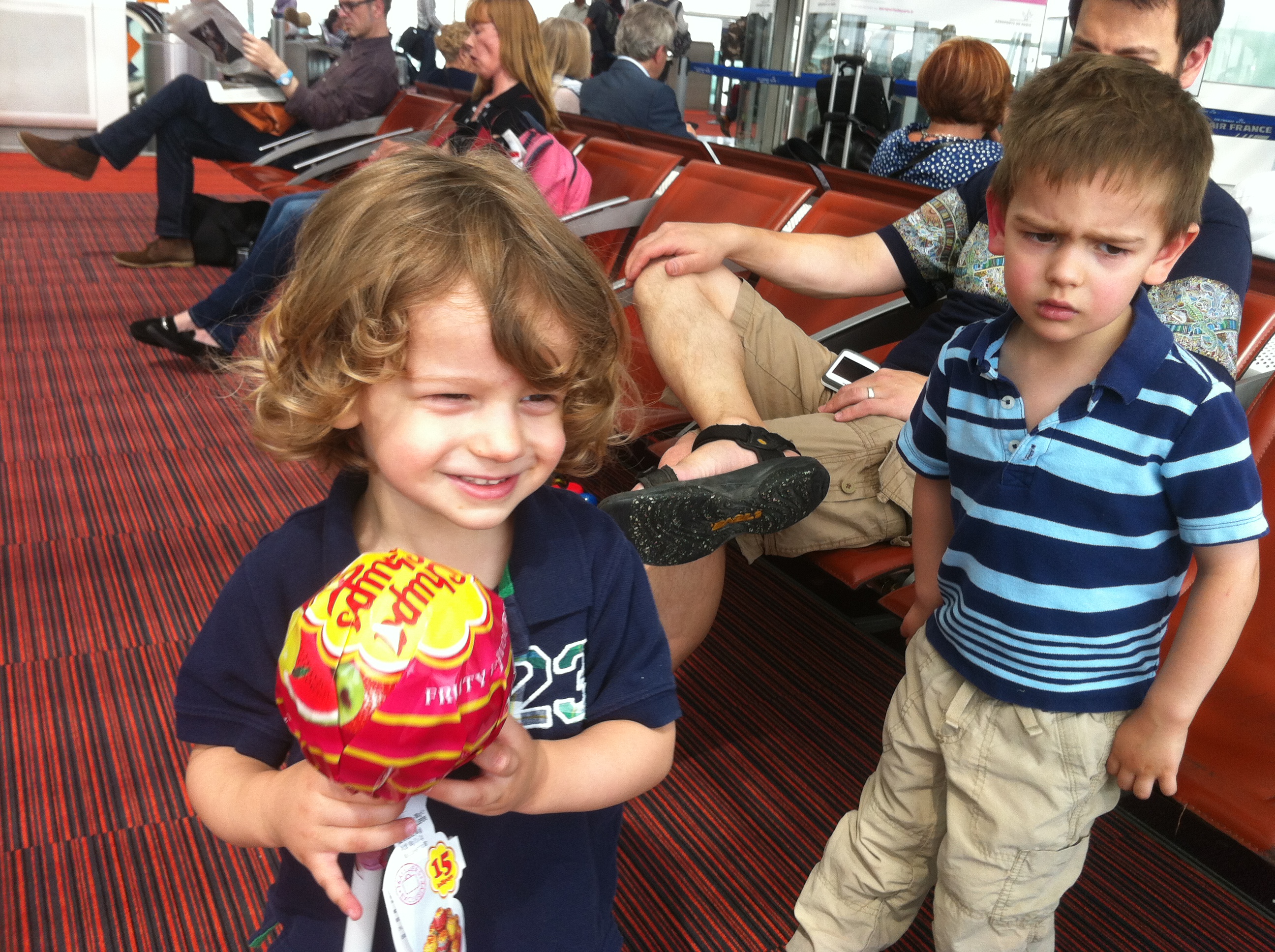 Liam, with the world’s largest lollipop (actually, 15 of them, cleverly packaged), and Benjamin, afraid he won’t get any (he did)

* Since the kids are off of bottles and don’t use pacis, we’ve struggle with how to handle ear pain from pressure changes during the flights.  They usually get so upset so quickly that we can’t coax them into drinking water, milk, or even juice from their sippy cups, and they end up just having to tough it out.  This time, we tried something new that worked great — lollipops!  The kids feel like they’re getting a special treat, and they last long enough to get through the pressure change (wait until you’re rolling for takeoff to hand them out, though).  Coming home, we were out, and had to go shopping.  Our only success was a mega-pack at the Duty Free shop at the airport.  (Now we have some for our next trip!)

I think that’s it from our trip to Paris.  More soon from Vienna again!