Bratislava, the capital city of Slovakia, is just a short trip from Vienna — the closest capital city to where we are.  (I also recently learned that it’s the only capital city in the world that borders two independent countries — Austria and Hungary — so that’s pretty neat.)  It’s an easy trip, and we’ve always meant to go, but somehow, in our years of travels, we’ve never gone.  We’ve planned to go many times, gotten as far as booking hotel rooms and transportation, but never actually made it happen.

This past May, we finally went.  It’s close enough, and small enough, that we made a day trip of it (after some degree of deliberation) and opted to travel by boat, rather than by train or car.  The idea of a boat trip seemed really fun, and we did a bit of research to try to find the best (and most cost-effective) way to get there by boat.  (The MOST cost-effective would have actually been the train, but we were set on the idea of the boat.)  We settled on taking a Slovakian hydrofoil boat (rather than the more expensive, and more centrally located, Austrian boat).  The Slovakian boat would leave from a pier on the Danube, while the Austrian boat went from a spot on the Danube canal (much closer to where we live).  The Austrian boat had several daily departures and returns, while the Slovakian boat had only one.  The Austrian boat definitely would have been more convenient, but we decided to be adventurous (plus save a few Euros) and try the Slovakian boat.  Though we had planned to buy the tickets ahead of time, we didn’t, and so our goal was to arrive a few minutes before departure and (hopefully) buy our tickets there. 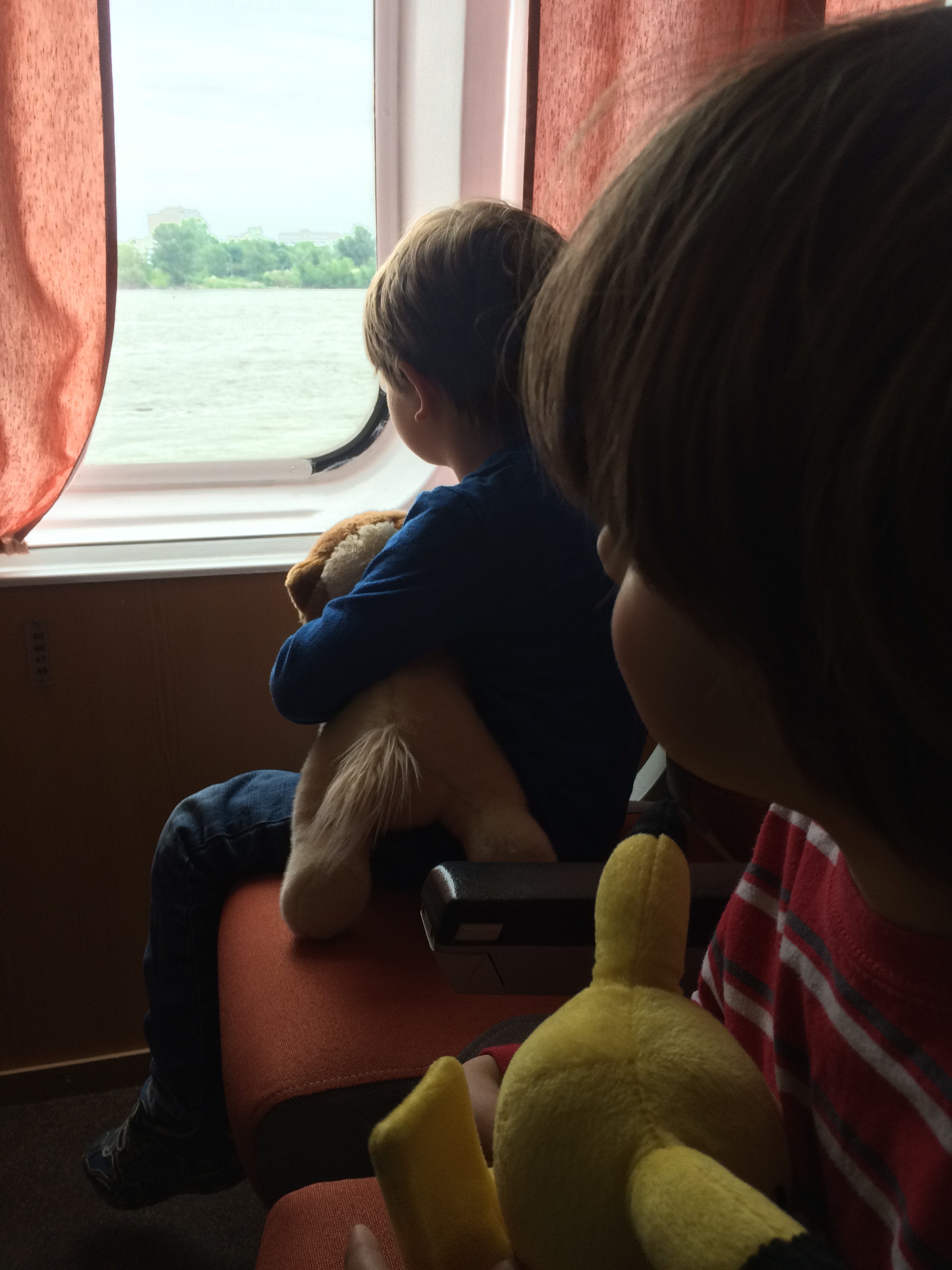 Of course, we’ve pretty much never been early for anything, so instead of arriving early, we got to the boat just minutes before the scheduled departure, without tickets and without time to stop for cash.  We were hoping we could pay with a card, and when we arrived at the dock, out of breath from our jog from the train station, we tried to enquire about purchasing tickets.  While Dan tried to find out about tickets, I questionably eyed the boat, which looked a bit more worn than the pictures we’d seen online.  Time was short, though, and one of the staff waved us inside.  We thought we were going in to get tickets, but no.  There was no way to buy tickets on the boat, so we were to ride to Bratislava, and then buy tickets at the boat station on that end!  This was all a bit hard to understand, though, because none of the crew spoke German or English (and we don’t speak Slovak), but we eventually got it sorted out, and we were on our way down the Danube! 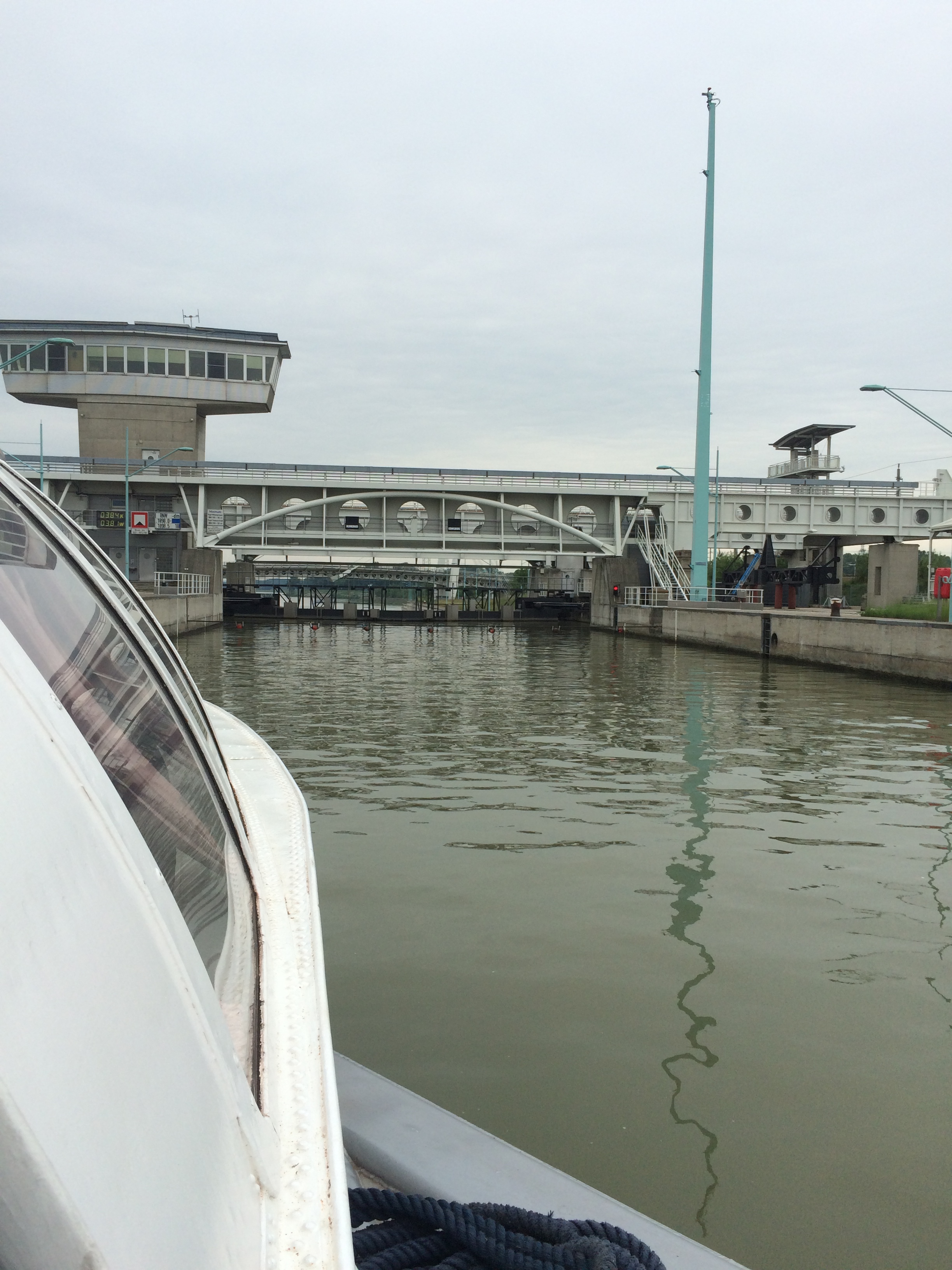 At first, we were slightly disappointed that there was no outdoor seating (which we had seen on advertisements for the Austrian boat), but once we got underway, it was clear why — we got going WAY too fast for it to be safe for anyone to sit outside.  The boat was comfy enough, with a little snack shop (we got some coffee and some Slovakian treats), and there was a protected outside spot to stand and see the scenery.  Our choice of boat (and route) was completely affirmed, though, when we got to ride through one of the gigantic locks on the Danube.  (The Austrian boat, which moors on the canal, comes out downstream of the locks.  Thus, that boat has a 15 minute shorter trip, but the long way was totally worth it.) 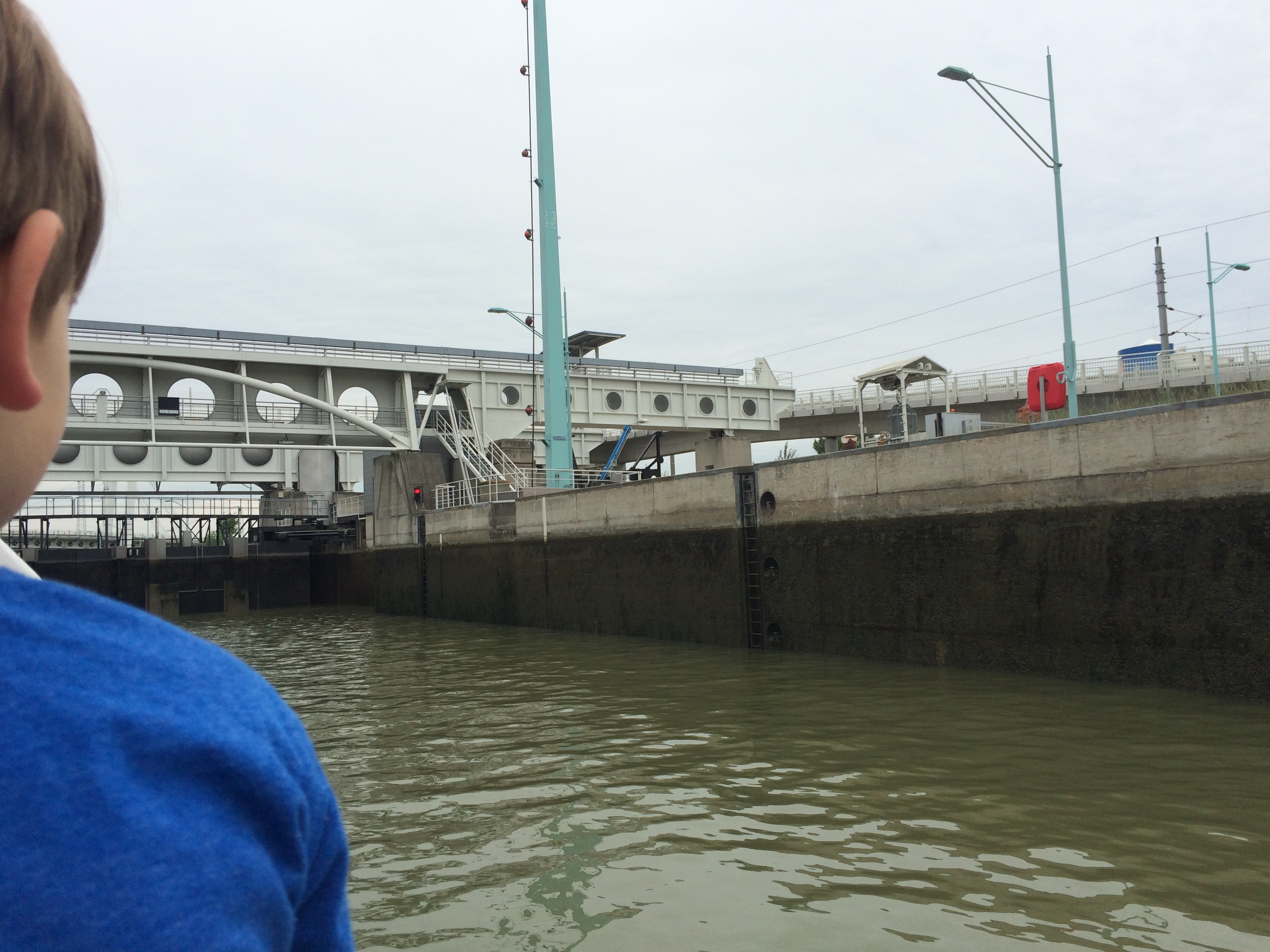 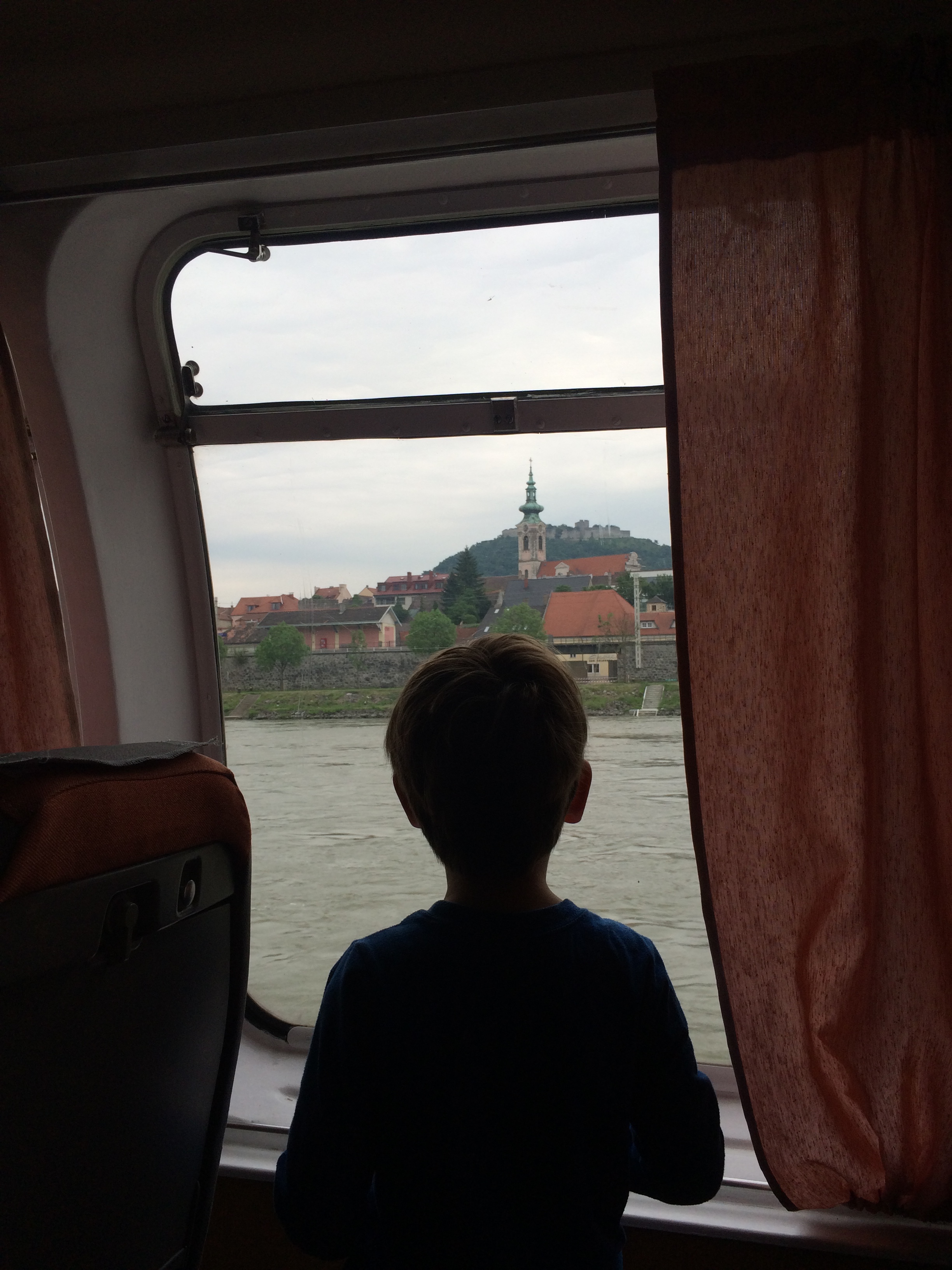 Our boat pulled up into a giant holding area, a massive set of gates rolled closed behind us, and, very gradually, the water leaked out of the holding area and we watched as the walls of the lock, at first level with our eyes, gradually rose far above our heads.  Finally at the lower level, the huge doors in front of us opened, and we got underway again.

After that, our 90 minute journey was pretty uneventful, and we were soon in Bratislava, Slovakia.  (A new country for all of us, and, for three of us, our first time behind the former iron curtain.)  Our first task was to purchase our tickets for our trip, but other than that, we just wandered around the city.  We weren’t entirely sure what to expect.  We saw a very old-fashioned looking tram system, some very interesting urban art, and a group of Hare Krishnas parading through the streets.  We loved Bratislava’s winding streets, enjoyed some fantastic hot chocolate, and tried a very Slovakian lunch (well, Dan & I did — the boys had schnitzel).  We indulged the boys in ice cream, as is our travel tradition (even though it was chilly and rainy), walked by the American embassy and played in a park.  I liked the feel of the city — a bit smaller and less opulent than Vienna, but definitely European . . . and not as “Eastern European” feeling as I was expecting.  My favorite thing was the series of birdhouses stationed throughout the green space in the city center.  Before we knew it, it was time to head back to the boat (by way of a Slovakian grocery store to check out the local treats). 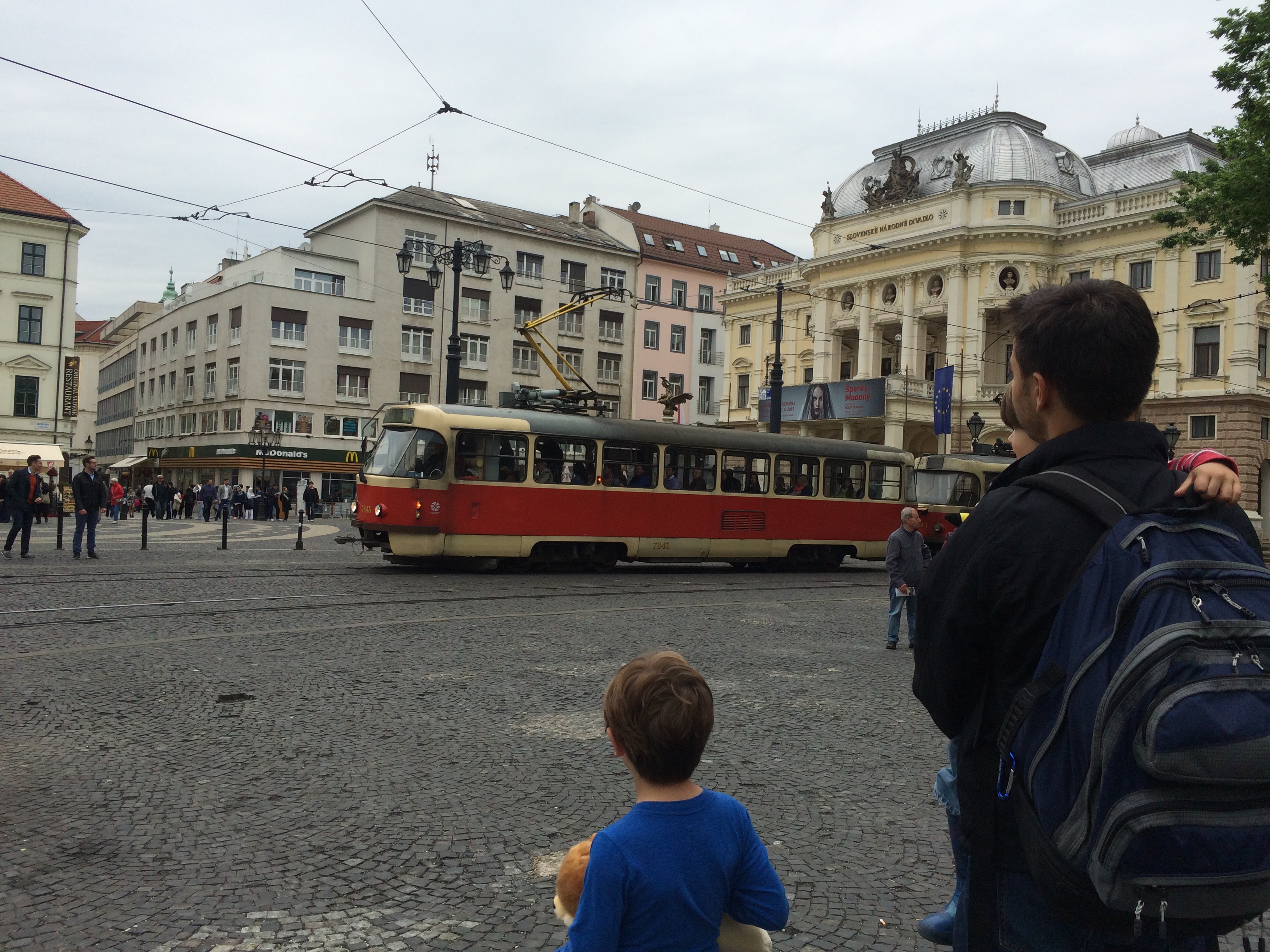 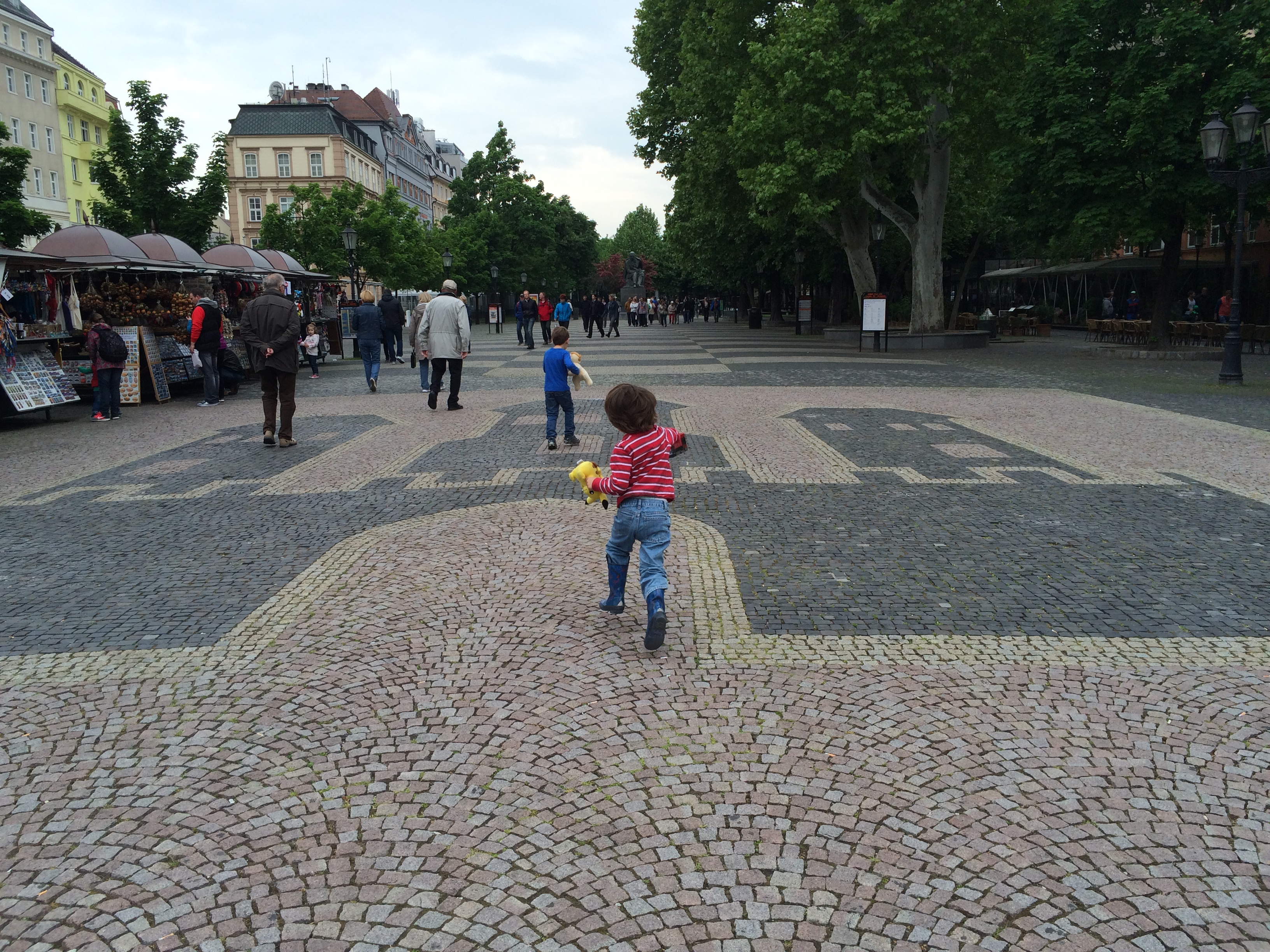 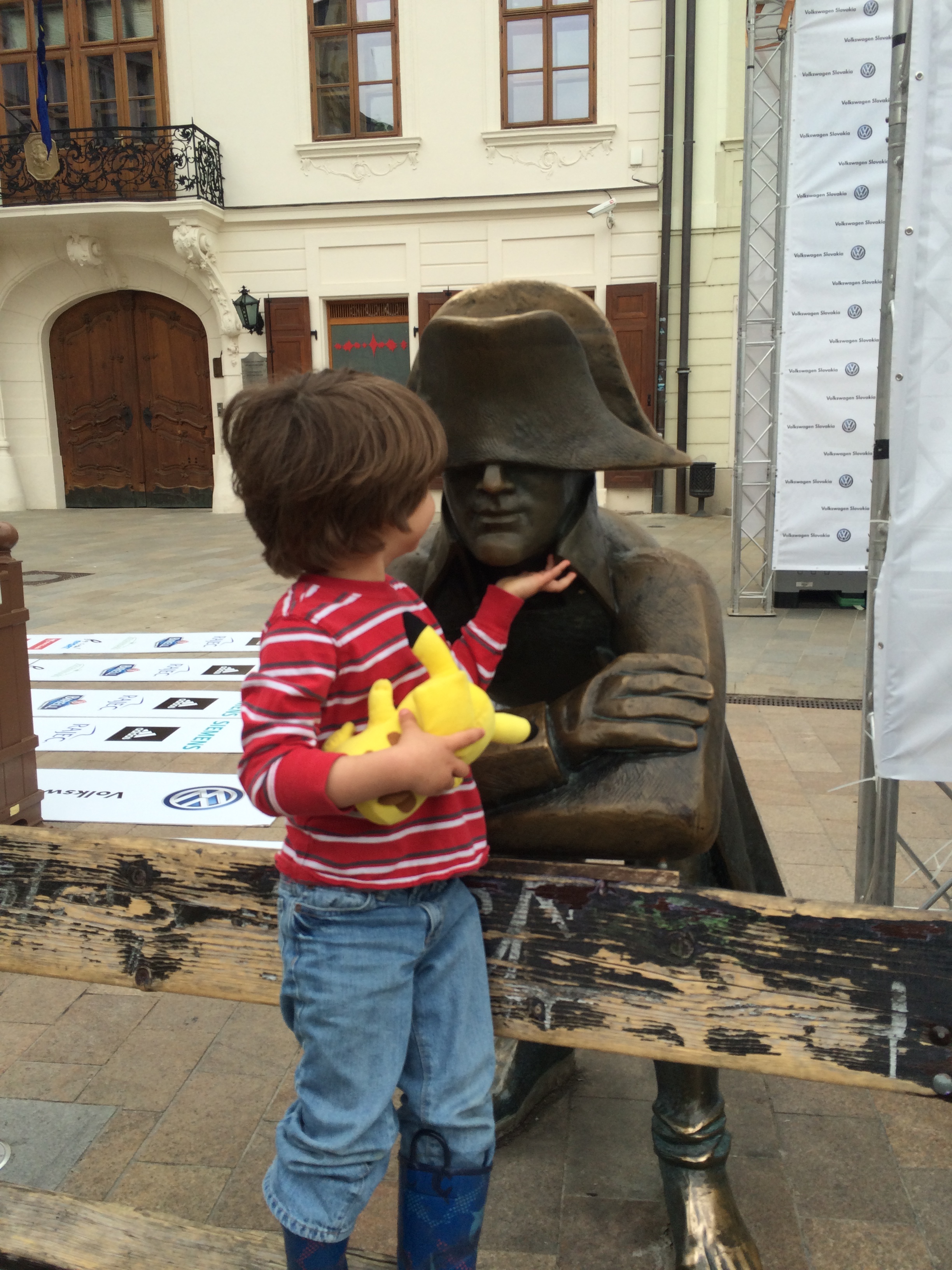 We saw a lot of Bratislava, and definitely enjoyed our time, but our day there was not quite long enough.  I think we may have to go back another time, to see the castle and explore some more (and maybe to do some shopping, since I believe there are some British and American shops there that we don’t have here).  Our trip back to Vienna was lovely, and slightly more peaceful (our kids were worn out a bit from our day), and we got to go through the lock again, this time watching our boat lift up to the shoreline from far below.  Though there wasn’t a lot to DO in Bratislava, we certainly spent a lovely day there, and I expect we will return.  It’s a fun and easy day trip, and honestly, I think the journey alone was worth the effort. 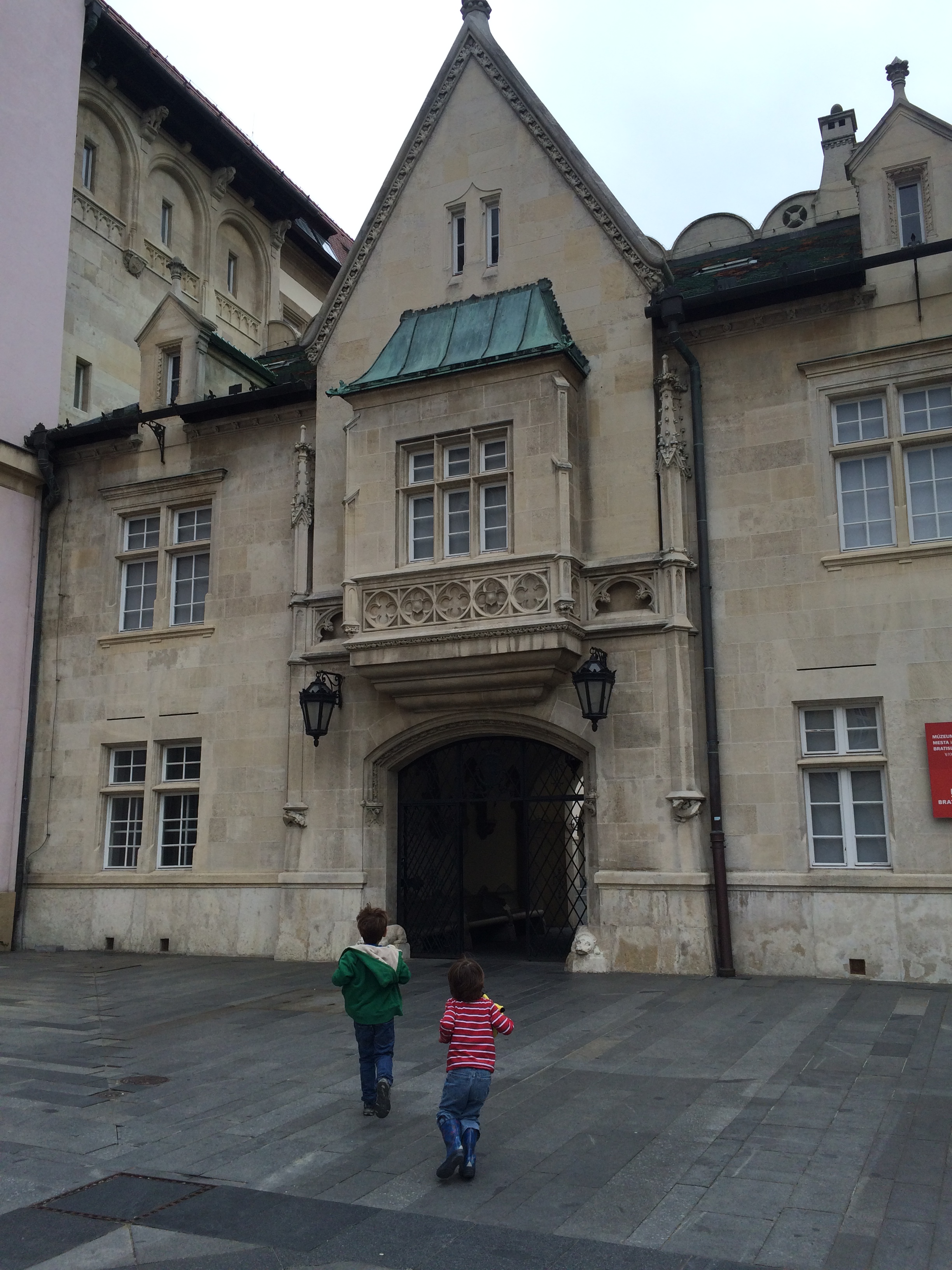 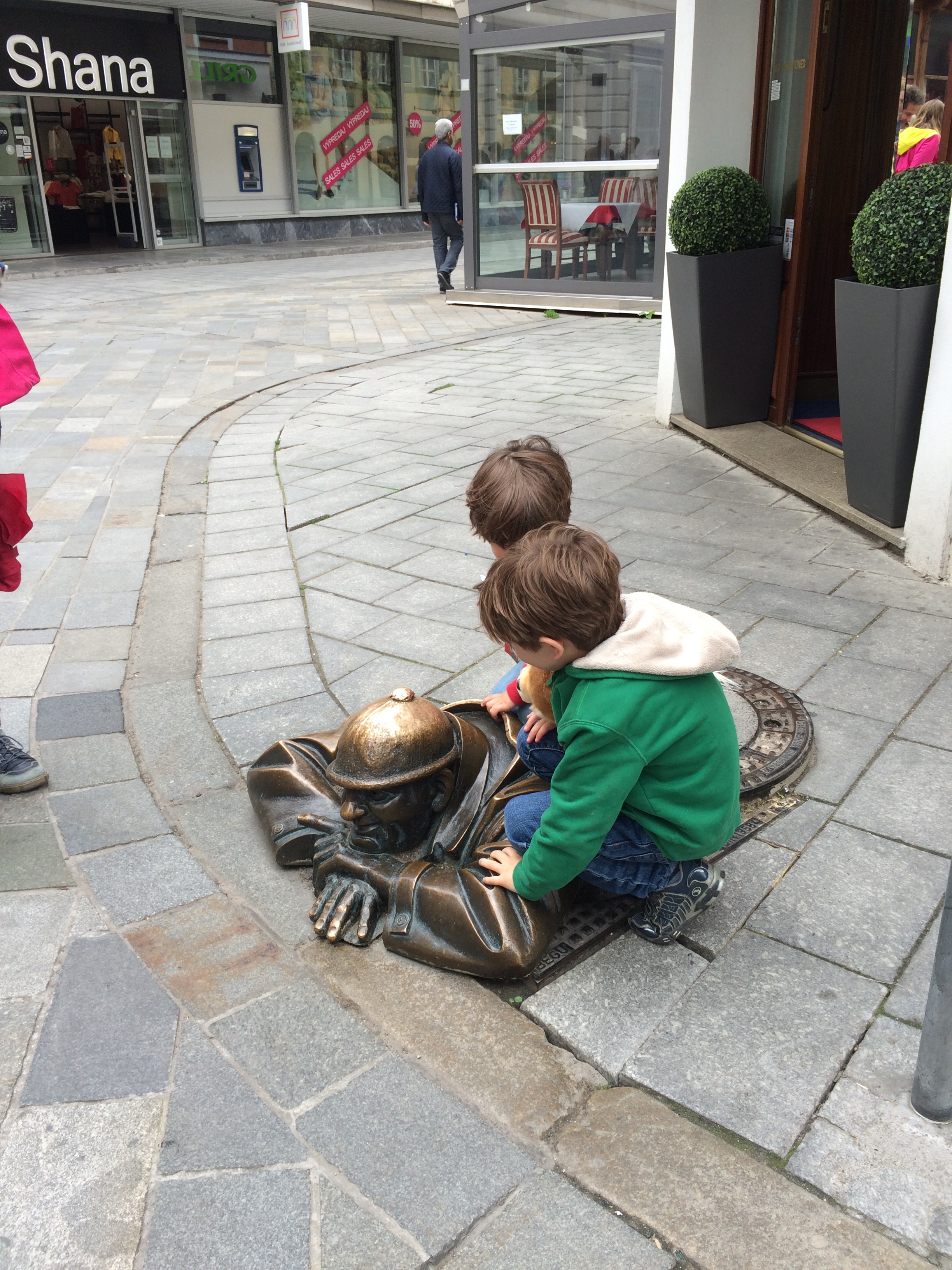 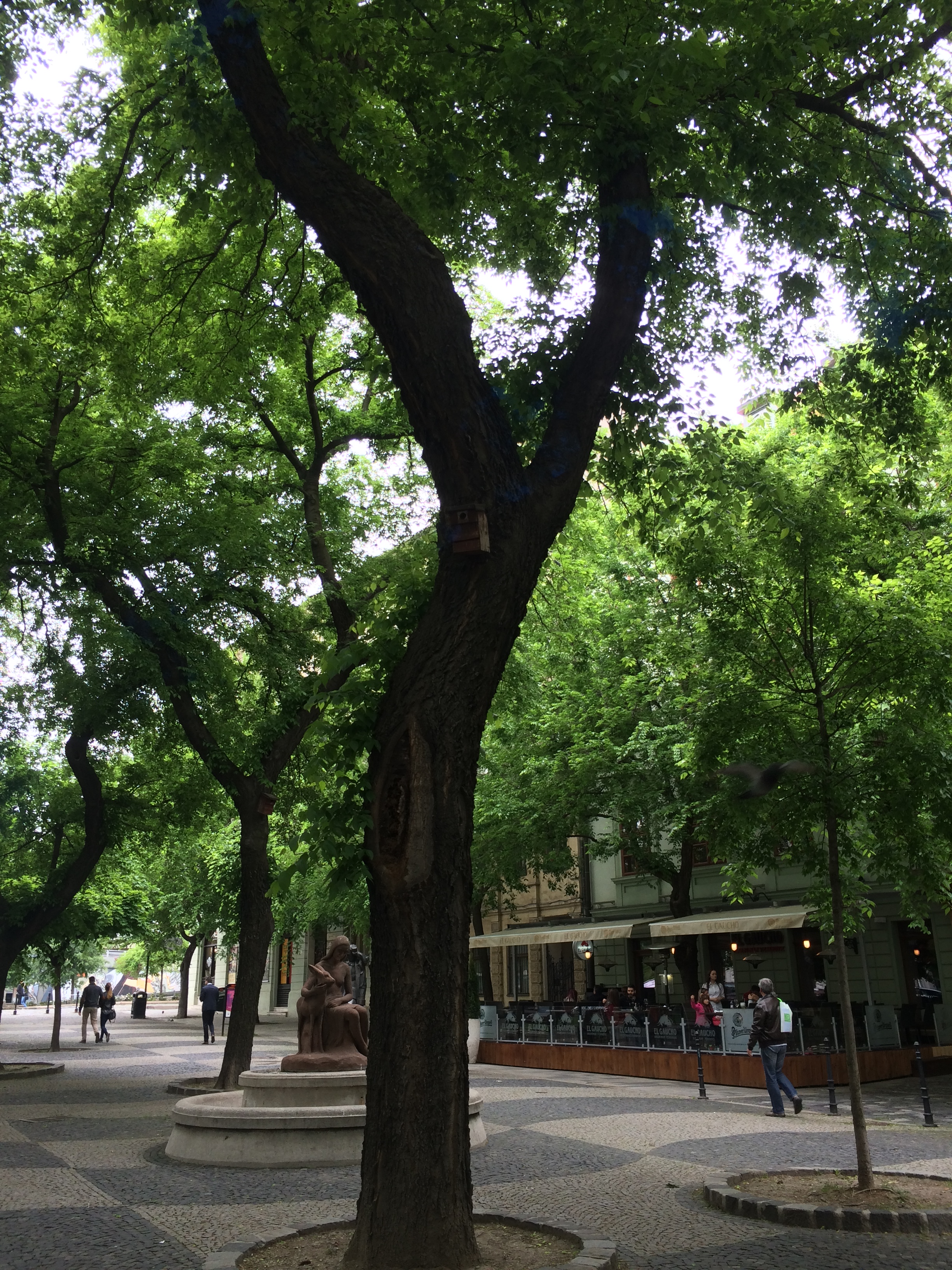 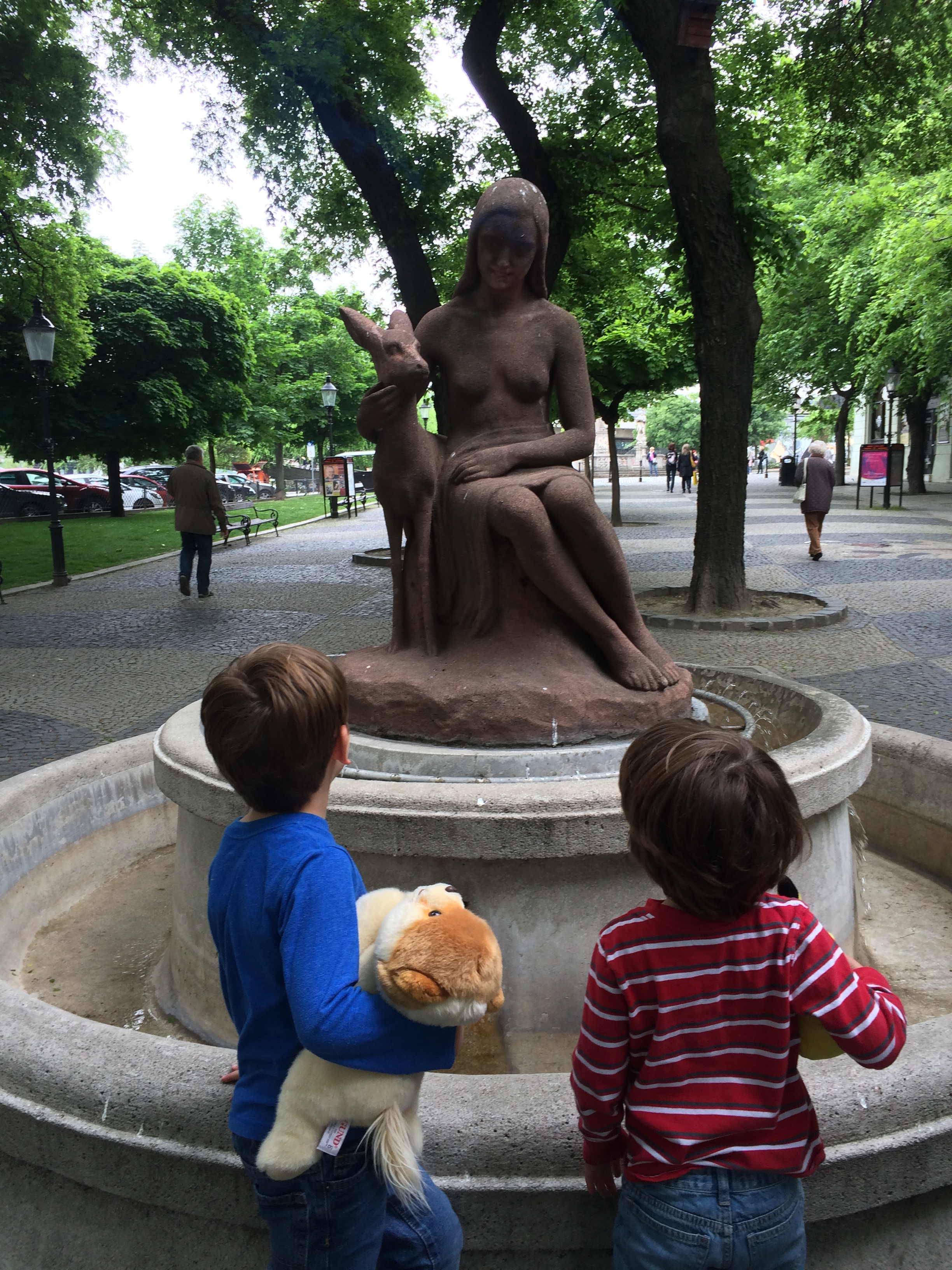 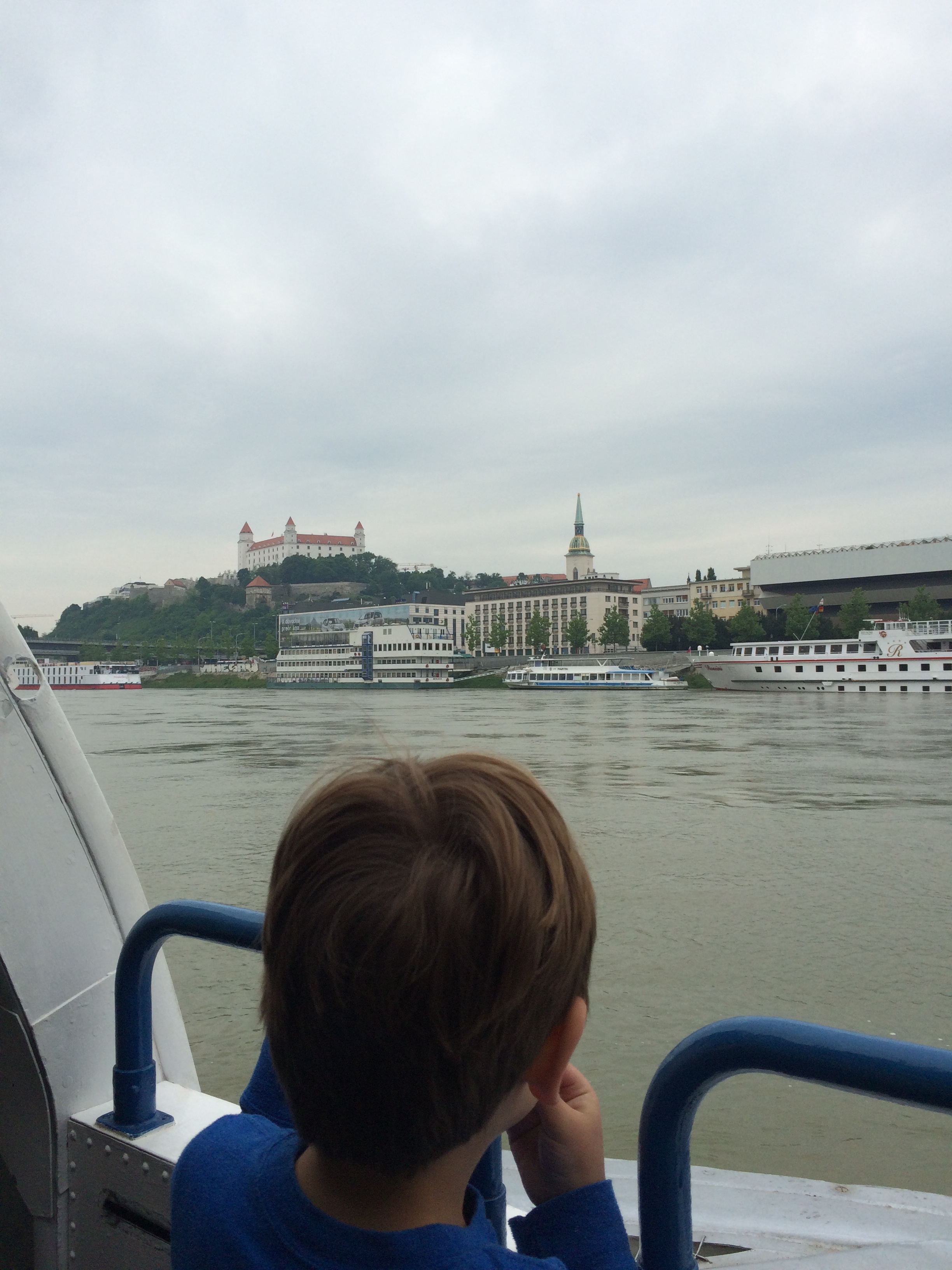