We had a great vacation.  We saw some new (to us) places in Austria, had some amazing experiences (including one of the most fun things I’ve ever done — sommerrodelbahn) and actually got a chance to relax and recharge as a family, for maybe the first time.  (We’ve vacationed before, but I don’t think we’ve ever really achieved “relaxation” before as a family.)  It was truly a fantastic trip, and I’m going to write all about it, very, very soon (not like last year’s vacation, which I’m still working on writing about . . . and which I will also get back to soon).

But, for today, we’re back, we’re on a new schedule, and I suddenly feel like I don’t know how to be a stay-at-home parent anymore.

In retrospect, planning a pediatrician appointment for today, our first day “back to normal” (and it’s a new normal) was not the wisest plan.  But, we were gone the last two weeks, our pediatrician leaves on Friday for her vacation, and this is one of those things that we wanted to get done during the summer, so here we are.  (We also have a dentist appointment on Thursday, and at least 3 other doctor’s appointments to try to get in this summer.)  Besides the pediatrician appointment, though, I just feel like I don’t know what I’m doing.  I’m home, with the kids, just me & them all day.  And though I’ve been a stay-at-home mom for almost 6 years now, I suddenly feel like this is all very new again.  How does this all work?  How do I get things done?  How do I shower?  How do I go out for a run?  How do I get the groceries?  How do I manage both boys safely at the playground?  How do I fold the laundry, go to the bathroom, or prepare a meal without someone getting hurt?  I used to do this all the time — why don’t I remember how to make this happen??? 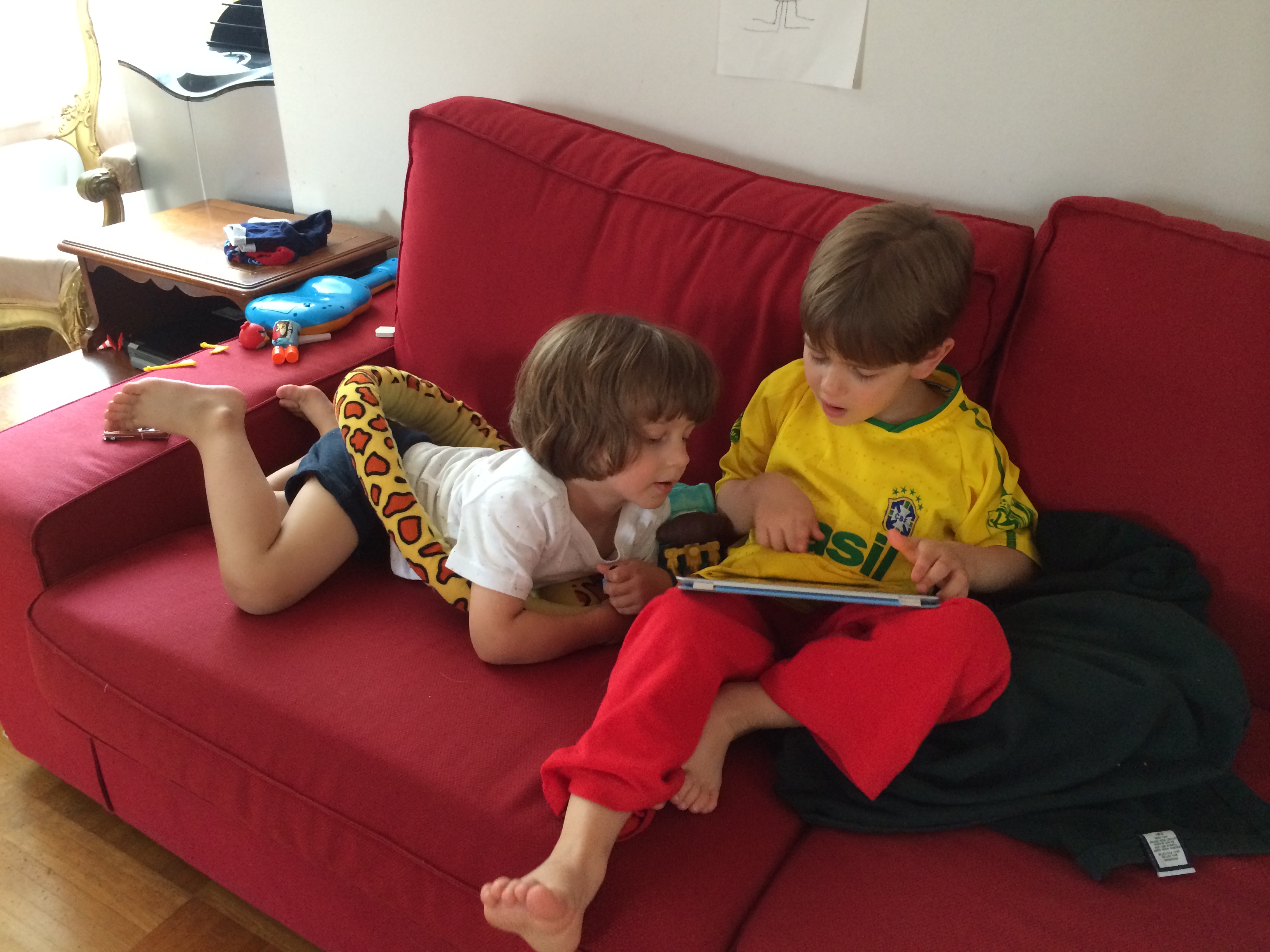 But, of course, the challenge is that it’s not the same as it’s ever been before.  Liam was never in school before this year, so this is the first time I’ve had him at home full time since he’s gotten used to that schedule.  B isn’t napping anymore, so this is the first time I’ve tried to get Liam down for a nap while B is doing other things.  Both boys are bigger and more energetic.  They both have more need to expend their extra energy and more ability to injure each other while they’re playing.  While they’re old enough to reason with (more or less) they’re also old enough to require a bit more substantive mental stimulation.  And, for the first time, I’d gotten used to having some time on my own every day, so the loss of it is uncomfortable for me.

It’s fine, though.  We’ll figure it out — we always have before.  And I know that I’m not alone in this feeling.  Parents everywhere are suddenly faced with the same dilemma — “Why is my house suddenly overrun by these short, demanding people, and what am I supposed to do with them?!?”

Most of my time as a parent has been spent either feeling overwhelmed, trying to figure out how to get a handle on things or being pretty certain I’m screwing everything up.  (I do other stuff, too, that’s just in the background.)  This is a part of parenting that I didn’t anticipate before I became a mom.  I knew that the early days with a new baby would be hard (though I didn’t know how hard), but I didn’t know that I would never really get things “figured out” — that I would never get past feeling like a rookie at something I’d been doing for years.  The thing is, this game is constantly changing.  Every time I emerge from the tunnel of confusion brought on by new schedules, preferences, temperaments, questions, developmental stages, personality changes, and just life in general, I get knocked sideways by a whole new, different set of circumstances that requires a completely new approach.  I’m always behind the curve because the rules are always changing.  That’s just how it is.  Although it’s tough, the upside is the knowledge that however hard a particular stage as a parent is, it will be over soon.  The downside is that when things are finally smooth, they’re guaranteed not to stay that way for long.

We’ve been in a surprisingly long period of stability around here recently.  Liam has mostly adjusted to school, outgrown his phase of night terrors (more or less — he no longer gets them every night) and it has become almost possible to reason with him sometimes.  B has gotten the potty thing mastered, and has gained a surprising amount of independence lately.  Most of the time, a family outing no longer requires a stroller, and dinners don’t always end with something being thrown, worn, or dumped on the floor.  We’re able to brush teeth at night without major fits (occasionally) and the boys require only constant reminders (and not being chased through the house) to get ready for school.  Things have been pretty easy around here for a little while (and by “a little while”, I mean since sometime after Easter).

So, of course, everything is about to change.  Today is the first day of the last week of B’s time in preschool.  Starting on Friday, I’ll have the boys home until August.  And when they do go back to school, Liam will go back to this same school, while B starts at a new school.  In the meantime, B, who still takes an afternoon nap most days, needs to get used to not having one, because he starts full-day school in August.  But Liam, who turns into Mr. Hyde if he doesn’t nap (and whose night terrors come back if he sleeps too soundly at night, which is well mitigated by not going to bed over tired), still needs a daily nap.  And, their shared nap time has historically been when I get a lot of stuff done every day … like writing this blog … so that’s going to require some rethinking.  (And, as demonstrated by the fact that I’m still blogging about last year’s summer vacation, taking an extended blogging break doesn’t work too well for me.)

So, later this week, everything changes.  (Again.)  We’ll go on vacation for a bit, come home, and sort out a summer schedule for the 6 weeks before school starts up again.  I’ll convince Liam to nap even though B won’t be, keep B quiet but busy so I can get a little done around the house and sort out an hour or so each day to find time to work on this blog.  It might be a challenge, but, in exchange, I get to have my guys home every day for a few months, and that’s going to be great.  It’ll be a bit overwhelming, but I’ll get it sorted out.  It always is, and I always do.

This year, things have just gotten a lot more complicated.  In addition to Dan’s vacation time for the next year (6 weeks, earned at a rate of 2.5 days/month) we now also have to take into account the time B will be permitted to take away from school.  B gets 4 set weeks off, when the school is closed (2 at Christmas, 1 at Easter and 1 in early February for the semester break), and Dan gets 10 holidays throughout the year.  (B doesn’t get holidays, but there are 3 teacher work days when the school will be closed.  We don’t yet have those dates, and probably won’t until September.)  Additionally, B can take 3 weeks off at any time, plus any time he likes off during the summer (July and August), without penalty.  Dan having to work on a day B doesn’t have school is no big deal (but it would be nice to maximize our travel possibilities) but B having to go to school on a day Dan has a holiday would be kind of a bummer.

With me so far?  Because my brain has been trying to process all of this for the past few weeks and failing.  I finally sat down with a pen and paper today (and used actual Algebra!) to try to sort it all out.  I’m not complaining — I understand that this is a wonderful “problem” to have.  I’m just kind of surprised at how complicated it’s all gotten.  (I think I may need differential equations for next year.)

Mostly, I want to be sure that we are all able to take time off for Christmas, and at least two other travel weeks through the year (again, having to ensure we’re not planning to spend the vacation time before we’ve earned it) and that we don’t leave ourselves with a bunch of vacation time that we can’t use because either Dan or B can’t be away.  There’s just so much that we still want to see.

It’s basically a complicated logic puzzle, and I think I’ve finally solved it.  I think.  Now we get to figure out where we’re going to go.

* The one exception in my adult professional life was when I was teaching dance.  The vacation policy was so Draconian that there was nothing to plan.  We were simply assigned a week, twice a year (once at Christmas and once in the summer).  We were only informed of which week we’d been given a few weeks before it happened, and we just had to make the best of it.