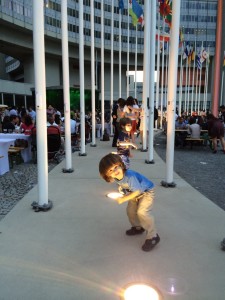 We’ve had quite a lot of memorable and interesting experiences on this adventure.  We’ve travelled to beautiful and culturally important places, seen beautiful art, had unusual experiences, faced challenges and met many, many kind and lovely people.  I love taking pictures of these moments.  Looking back at them always brings a smile to my face, and looking back at them as a collected set is pretty stunning.  Still, most of the time, when I’m taking a picture, I’m simply capturing the moment, not thinking of the greater impact it will have when viewed later.  Sometimes, though, while memorializing those moments, I’m aware of what it will be like to look back on it later — how it will feel as a part of our familial history. 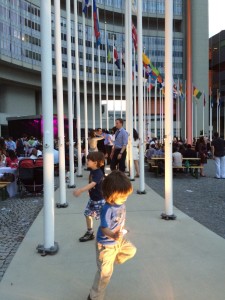 Last Friday, Dan’s work had their annual company party.  It was a nice one.  We’ve attended many work functions over the years (in several different industries) but we’ve never managed to get to one of these IAEA-wide events before (one year, I think we were in Paris, and the other time, I think one of us was sick).  Some work parties are more indulgent than others, some are more formal, some are a chore, a few, over the years, have been genuinely fun.  This was one of the best we’ve had the chance to attend.  Families were welcomed, there was live music plus a good DJ, there were (free) drinks and lots of good food (to buy).  There was socializing and dancing.  The party went from 3 in the afternoon until 10 at night, and the employees were encouraged to attend during work hours.  It was a real treat, for all of us, and everyone else there seemed to be enjoying themselves, as well.

Dan joined the party in the afternoon, but the kids and I didn’t arrive until later, after nap time.  We had dinner, chatted with friends, the boys had ice cream, and Dan and I even got in a few dances.  It was a good time.

But this is the IAEA, so the party was held in the central courtyard of the UN.  This might have just been Dan’s summer work party, but it was also a party at the UN.  And taking pictures of the boys dancing under the circle of flags, I was very aware that this is one of those cool things we’ve gotten to do.  It was fun while we were doing it, but I think it will always feel just a little bit unreal when we look back on it. 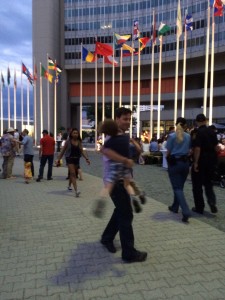 Benjamin has a summer birthday, which is a mixed blessing. I have a July birthday, too, and I know how it is. While it’s fantastic to never, ever have to go to school on your birthday, you also never get to experience the fun of having your birthday celebrated at school. And although it’s great that pool parties are always an option, and sometimes you get to have your birthday on vacation, everyone ELSE is always on vacation, too, so often many of your closest friends can’t be there to celebrate with you.

Last year, as B enjoyed celebrating all of the other kids’ birthdays throughout the year at school, I worried whether he’d get to celebrate his, and how he’d feel if he didn’t. Luckily, they make a point to celebrate the summer birthdays all together before (most of) the kids leave for their summer holidays, and he was so excited to have his school birthday party. (And, since we were home in the States for his actual birthday last year, we took the opportunity to celebrate a bit at home that day, as well.) This year, we assumed they’d do the same thing, and we asked, last month, if they knew when they’d be celebrating the summer birthdays. They assured us that they planned to, but they weren’t yet sure of the date. Not a problem, but as we’ve been approaching the unofficial end of the year (because it’s daycare, as well as preschool, the year doesn’t really end, per se, but many of the kids are absent for most or all of July and August) I’d been starting to worry that maybe it had gotten forgotten in the crazy busy times of the end of the year, but I was also hesitant to pester his teachers, because I knew they had a lot going on.

Yesterday, I decided I needed to ask. If it had been forgotten, I needed to make sure that they had time to plan something (if they wanted to). As it turned out, Dan took B to school, but he was running late, so he didn’t get a chance to ask in the morning. The mystery was solved when Dan picked him up, though, because the teachers had told him he’d be having his party . . . today! And although that came as a bit of a surprise, it was definitely a pleasant one. 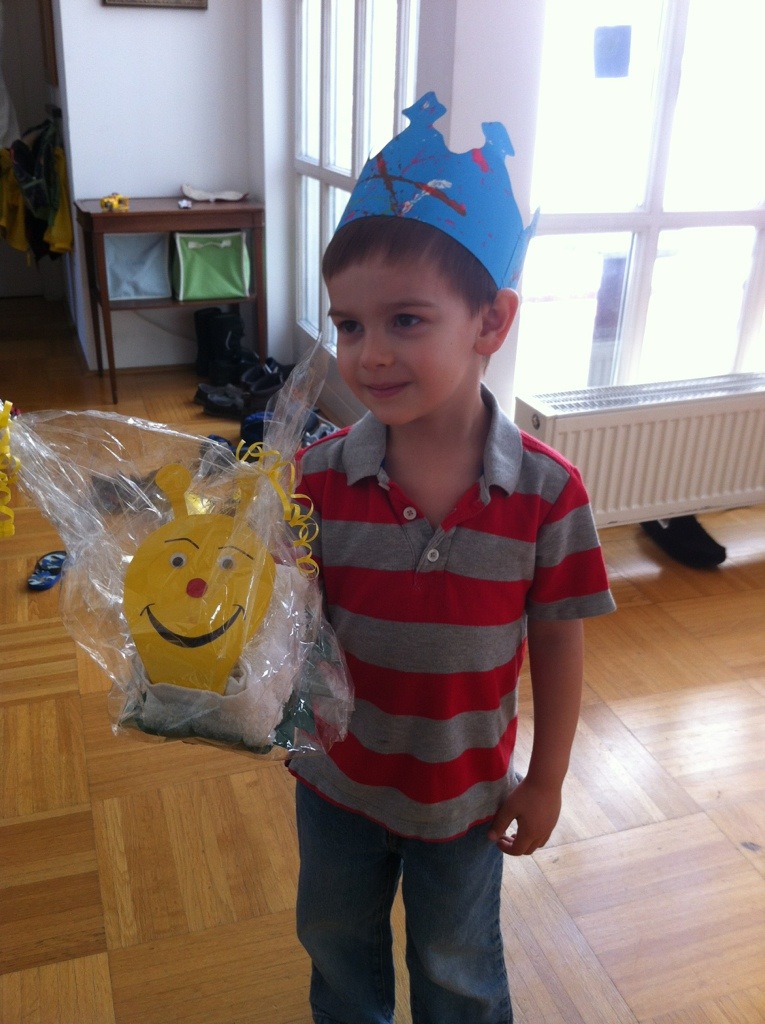 So B went to sleep last night excited about his birthday, and woke up (bright and early!) even more excited. And it sounds like he had a wonderful day. They had pizza, cake and ice cream, everyone sang for him, he got to wear a crown, and he even got a gift (a towel decorated as a snail). All of his best friends were there, and they all got to play in the garden, too. I think it was a great day, and he is a very, very happy boy (although he was insisting, this afternoon, that he is now 5, and I’m insisting, just emphatically, that he really isn’t quite yet).

Because we only found out about this yesterday, we weren’t able to do much in terms of a celebration here at home (which is really ok, because we’re planning an actual birthday party with his friends in July) but we did pick up some cookies and ice cream as a special treat. I am so very glad that he got to enjoy a wonderful birthday celebration at school, and I am beyond grateful to his teachers for making a fuss over each and every child (even the summer birthdays!). It’s great to see my special guy have his special day.