Tomorrow we’re off to the States for two weeks to spend the holiday with family (and hopefully some friends, too, if the schedule allows).  I am beyond excited to see my family tomorrow — some of whom I haven’t seen in almost a year and a half.

My plan is to take a break from writing, from the Internet, from posting pictures until we return to Austria in the new year.  So I’ll say Merry Christmas now, and wish everyone a beautiful season full of wonder and a new year of hope and excitement. 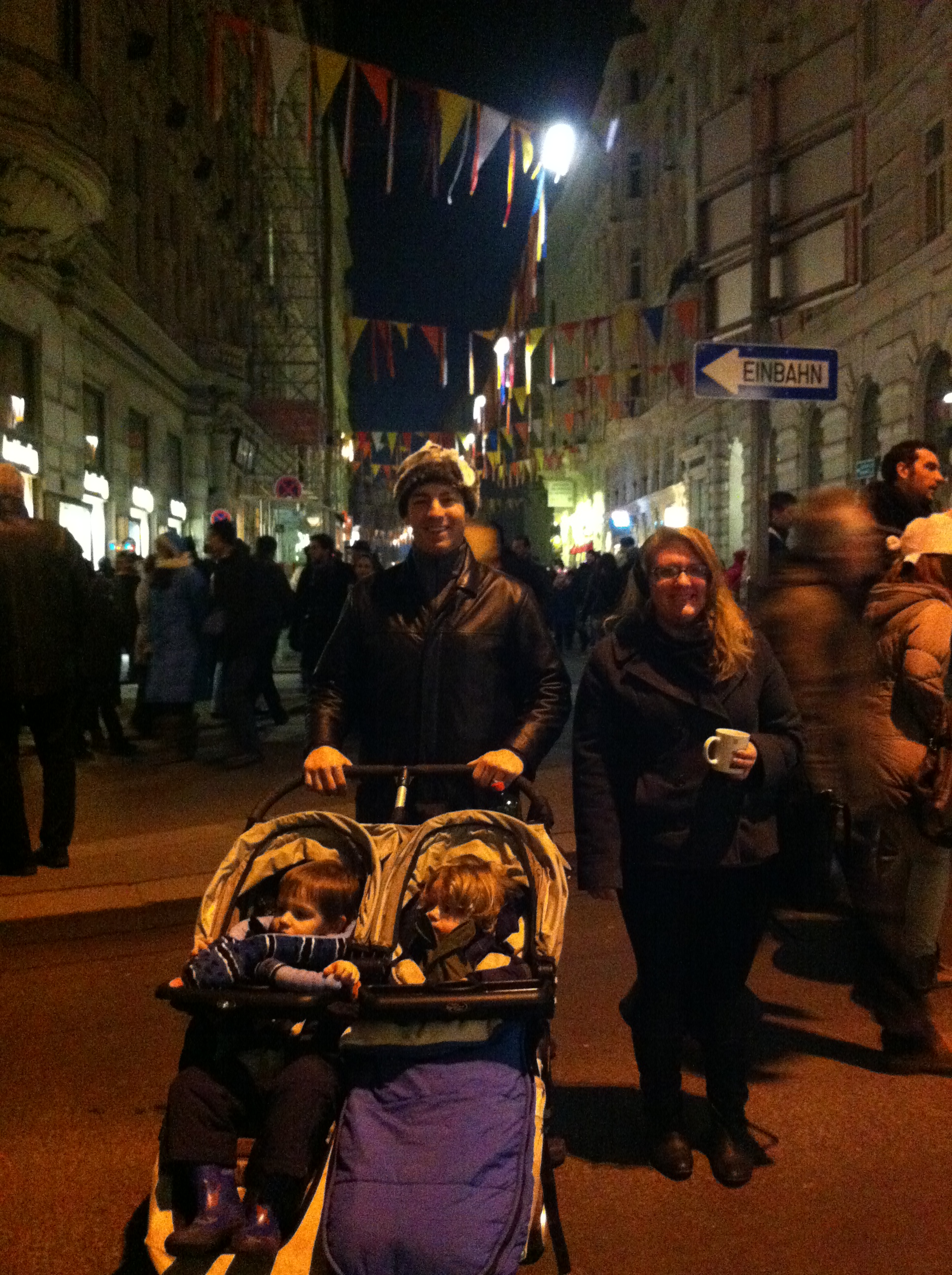 Last year, we went in to New Year’s Eve with no expectations, and we ended up having a surprisingly fantastic time (despite getting stuck remarkably close to where the fireworks were being launched with a child who was NOT amused by the tremendous amounts of sound and smoke).

This year, we had a much better idea of what to expect.  New Year’s Eve in the center of Vienna means day-long concerts, lots of public intoxication (but it’s surprisingly orderly), food and drink for sale, stands selling stuffed pigs for good luck in the New Year, many people dressed in crazy hats and sporadic fireworks throughout, followed by a big fireworks display at midnight. 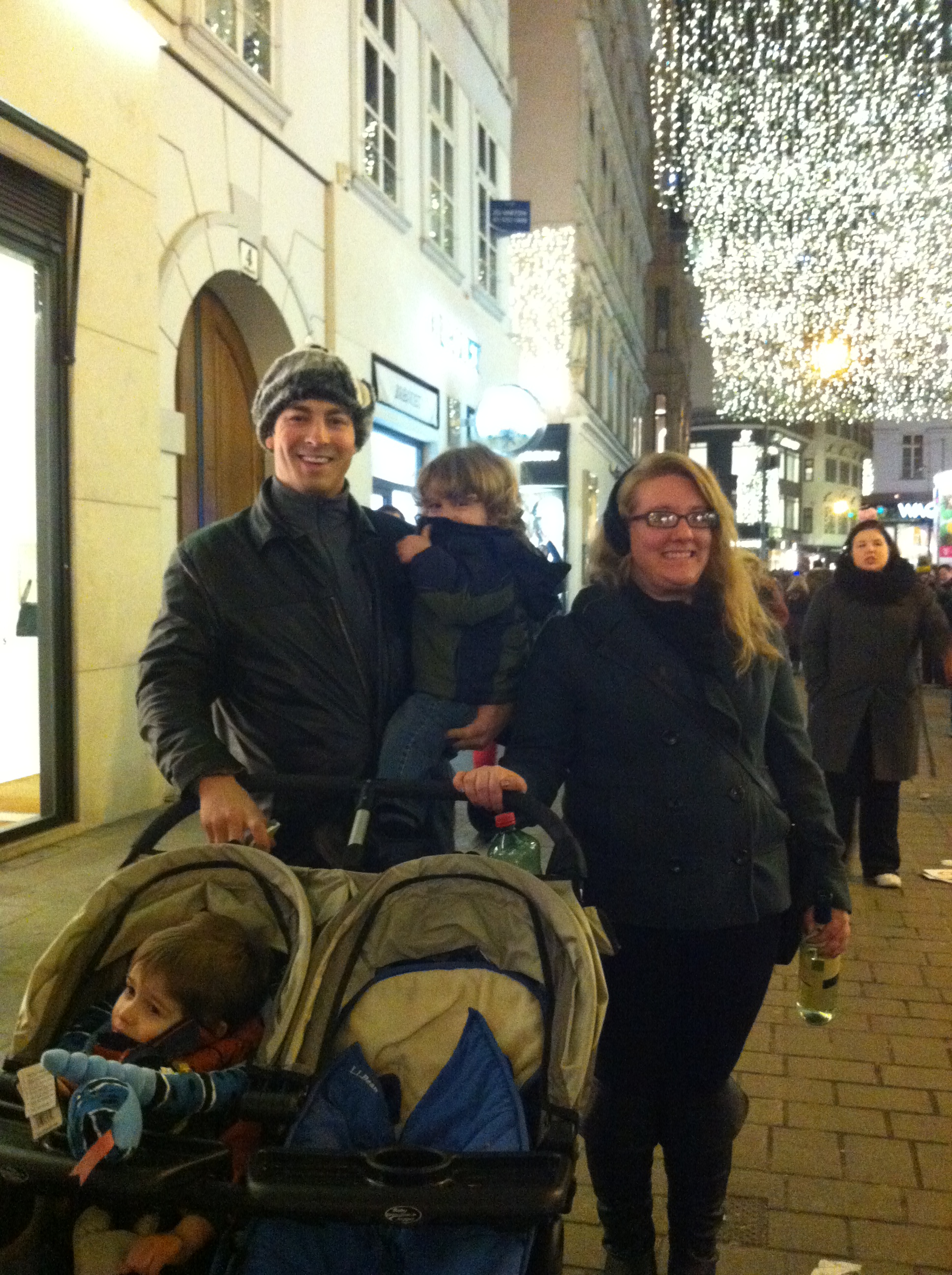 It’s a good time.  Much of the downtown area around the already large pedestrian zone is closed to traffic, creating a massive area in the center of the city closed to cars and available to revelers.  Concerts featuring all kinds of music are set up throughout the city.  It’s loud, and festive, and very, very fun.

And, since we enjoyed ourselves last year, we set out to try it again this year.  Again, we wandered through the streets along with everyone else in Vienna.  Everywhere was crowded.  Each concert had a huge number of people (of all ages) dancing along.  We started out with 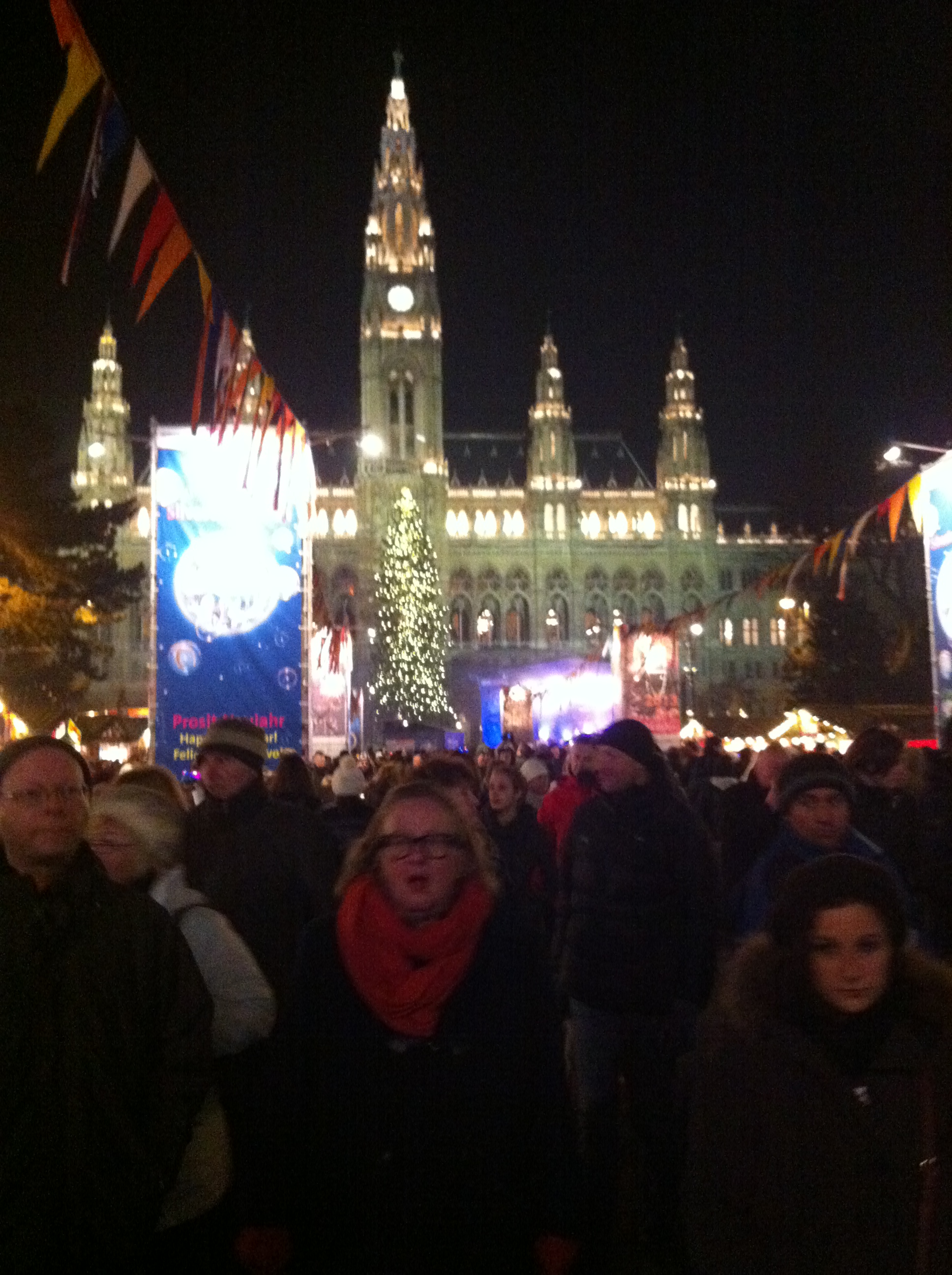 the kids in the stroller, but they got out to dance along the way.  We walked through the center of town, stopped for a cookie at Starbucks, walked past the Hofburg Palace, around the Ringstrasse and around to the Rathaus (which was hosting the most raucous party of them all).  We were cold, but we had fun.  The celebration was so enthusiastic and lighthearted, and it was fun just to be out in it.

But, unlike last year, the kids had had enough after a few hours.  Around 10:30, they wanted to go home, so we obliged.  We came home, got everyone dressed in pajamas and started to get ready for 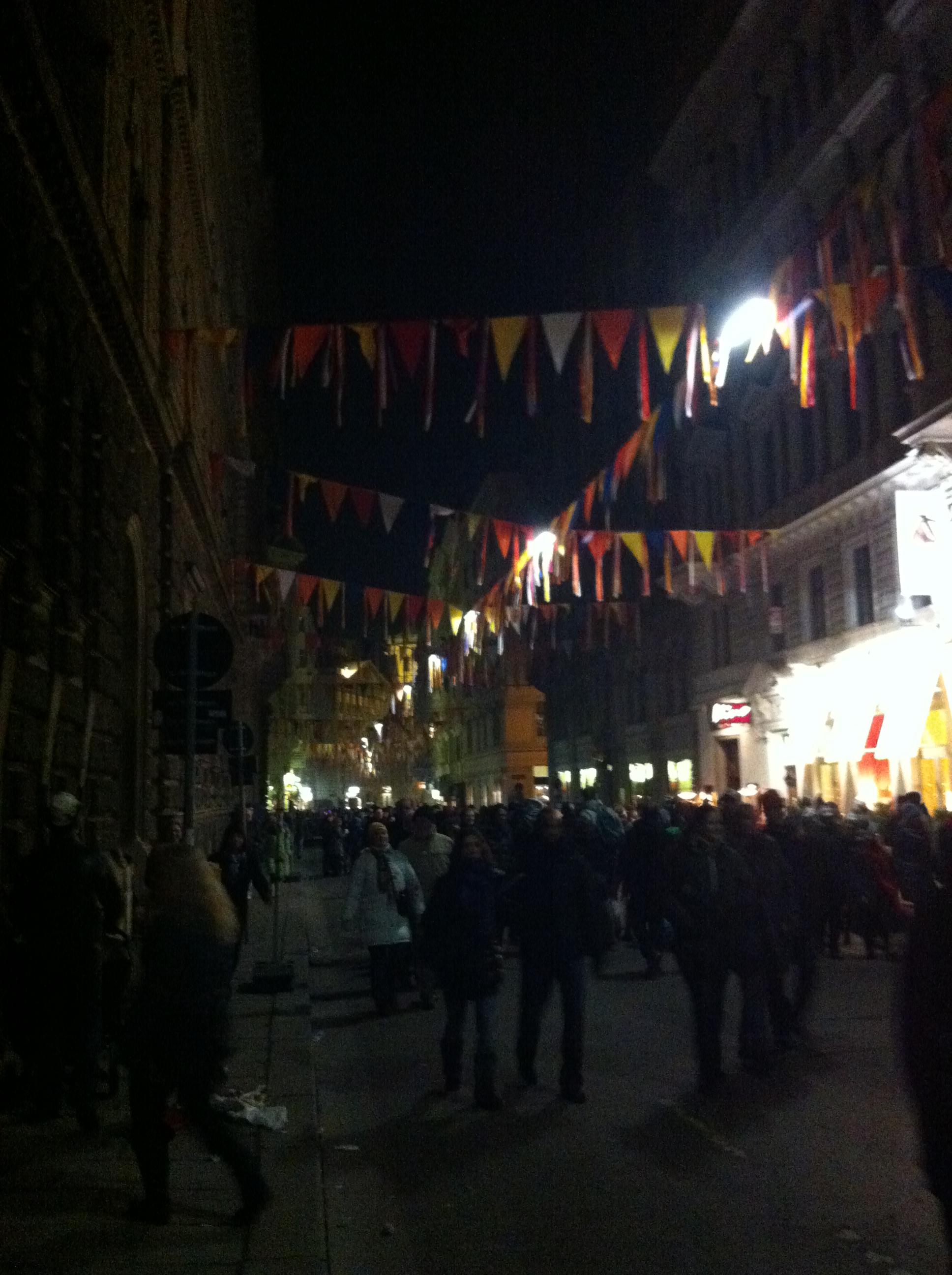 bed . . . but, it turned out, they wanted to stay up and be festive for the new year, just not outside.  So, we played Wii together until the big moment.

And, we were pleasantly surprised to find out, we could see some of the fireworks from our kitchen window.  So we rang in the New Year, all together, bunched around the kitchen window.  It was a great end to 2012 — Vienna throws a great New Year’s party. 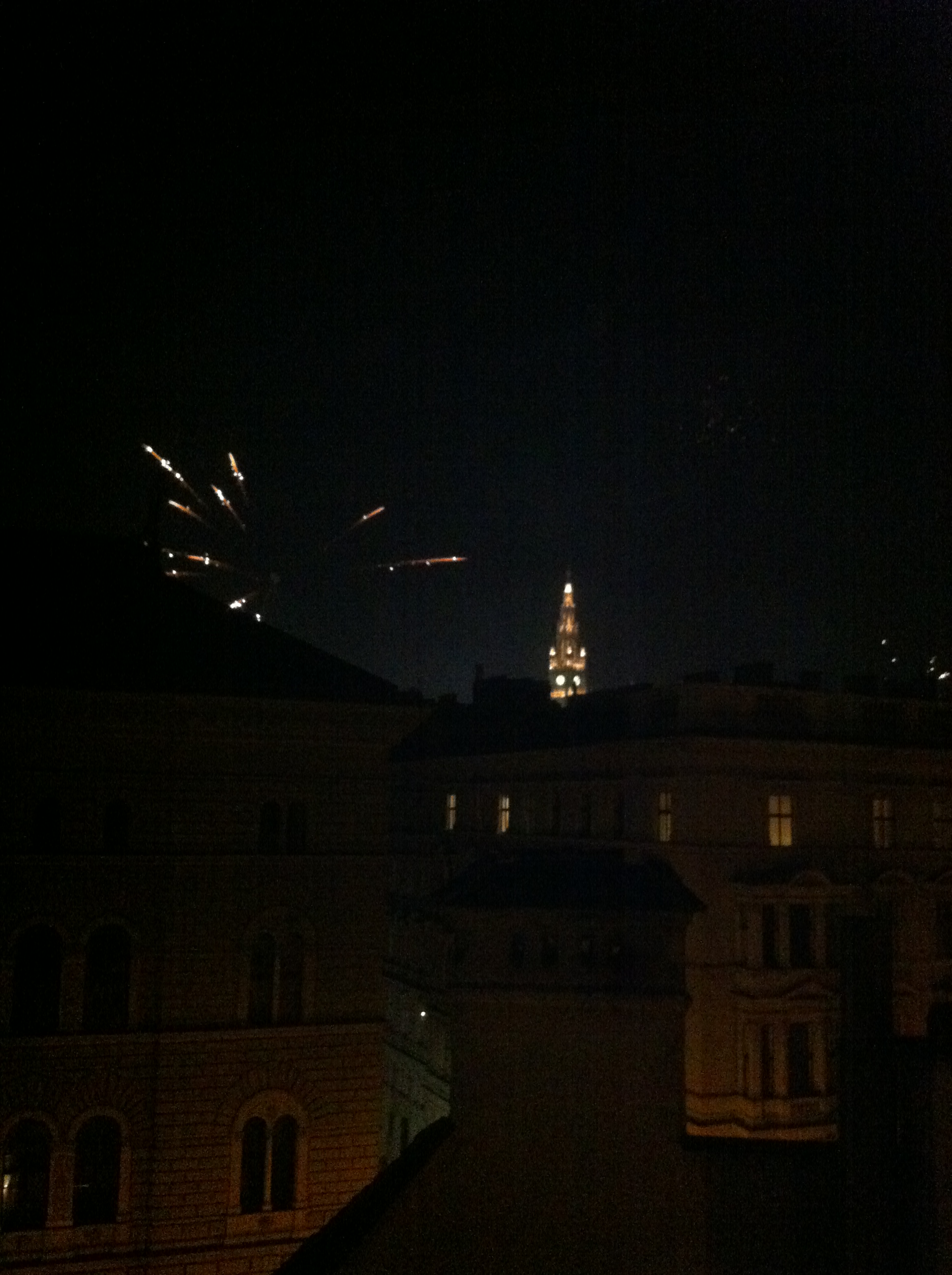 For the first time in recent memory, I’m entering into a year without having a set plan in mind for how it’s going to go.  The timeline for our year is very much up in the air right now, so I can’t confidently predict what we’ll experience in the next 12 months, but that doesn’t diminish my enthusiasm for it.

I know we’ll travel.  We have a ski trip (our first!) planned for later this month, and I’m working out the details of a trip to Italy in February (nothing like planning at the last minute — I’m an expert).  Benjamin has requested a return to Paris and Liam asks (daily) when we’re going to “rent a car and go to Germany” again.  There are places near here that we have yet to see:  Slovakia, Croatia, Prague, Graz and Linz.  And I am pretty confident that regardless of what our year has in store, we will find ourselves back in the British Isles again in 2013.  And, of course, in the US.

Liam will turn 3 in September, so he’ll start preschool this year (most likely) and Benjamin will be 5 (!) so he’ll start actual kindergarten.  I think that will be really exciting for both of them, and it will also mean that I’ll have a little time each day on my own.  I have no idea what that will be like (but I’m guessing I’ll enjoy it).

For myself, I want to make a point of getting involved in some kind of activity — riding, dancing . . . something.  Stuff like that has been missing from my days for too long.

I guess what I need to take from all of the uncertainty about our immediate future is to be open, flexible, and make the most of what I have in front of me.  I don’t know what 2013 has in store for me, but I’m quite certain it will be an adventure.

What a year it has been.  An entire year of living abroad — stretching my own boundaries, learning about . . . well . . . everything, questioning my perspectives, forgiving myself for failing, learning to laugh about the challenges and continually brushing myself off and starting again.

2012 was the year of international travel for us — sledding in the Alps, ascending the Eiffel Tower, wandering through Normandy, visiting home, enjoying the beach, touring castles and moors in England, being sick in Scotland, discovering the wonder of Ireland, driving on the Autobahn in Germany.  All in the past 12 months.  Yep, it’s been quite a year.

Benjamin has pretty well adjusted to school.  He has friends.  He corrects my German.  He learned to ride his pedal bike this summer (in about 10 minutes), had his first surfing lesson from his Uncle Adam and discovered that he loves to ice skate.  He is shockingly brilliant and amazingly sweet.  He is the best big brother Liam could possibly have.

Liam started really talking (a lot).  He runs, jumps, rides his bike, builds Lego towers and constantly amazes us at what he sees and understands.  He went to the beach for the first time (although he didn’t love it).  He adores Benjamin and works to be like him every day.  He has an unending enthusiasm for nearly everything and is the fiercest hugger I know.  This was his first full year living on a single continent.

2012 was an amazing year — one of the most profoundly transformational I’ve yet experienced.  We’ve finally gotten our feet under us here in Vienna.  We can manage our daily lives and our routine transactions (often even in German!).  We’re starting to thrive, rather than just survive.  We know our neighbors, we have friends (friends that even help us move heavy furniture) and we’re really starting to figure things out here.  I’ve made many memories this year that I know I will carry with me forever.  Vielen Dank, 2012!