Liam gets night terrors.  From time to time, he starts screaming in the middle of the night.  Sometimes he just screams, sometimes he cries, sometimes he calls out for us.  We rush in and find him, still asleep, but appearing to be in awful pain and torment.  He thrashes around, grabs at his legs, claws at his arms, wrings his hands.  To witness it, you’d be certain that he is at least in the throes of a terrible nightmare, and at worst, suffering an onslaught of pain from a horrible illness.

He is almost impossible to wake from this state.  Trying to pick him up intensifies his anguish.  Trying to hug or kiss him incites him to lash out violently.  Saying his name, turning on the lights, even clapping our hands, all serve no purpose except to upset him even more.  When we finally do wake him, he is still upset, but more at being rudely awoken in the middle of the night than anything else — he doesn’t remember being frightened or crying out.  Night terrors are apparently completely normal in a child of his age, and he most likely has no idea why, to his mind, his parents randomly wake him some nights full of stress and concern.  These night terrors can last 10-20 minutes (although it always feels like hours), but once it’s over, he is usually peacefully asleep again within minutes.

When this first started happening, we were terrified and overwhelmed.  We had a screaming, tormented toddler in the middle of the night with nothing we could do to fix him.  (We’ve since learned that it’s better NOT to wake him, so we don’t, but it goes against every instinct that I have.)  Of course, we went through all the normal parenting worries: is there something wrong with him, is he sick or suffering in some way, how do we help him???  And, honestly, the stress was amplified by the fact that we live in an apartment and we worry about whether we’re waking all of our neighbors when this happens.  Knowing that this is a developmentally normal thing (and that there’s nothing we can do about it) allays most of our fears.  But I still feel bad about what we’re inflicting on our neighbors.

We don’t have any idea how this affects our neighbors, because no one has ever said anything.  No one has ever asked us about it, or complained, but we can’t imagine that they haven’t noticed or that they don’t know which apartment it’s coming from (as an American family with small kids living in a country of exceptionally quiet people, we make more noise than the rest of our building’s residents combined).  Since I don’t know what anyone thinks about it (are they quietly seething or patiently understanding?) I worry.  I worry that they don’t understand, and one day the Austrian version of child services is going to show up and demand to know what torture we’re inflicting on our kid at 1 in the morning.  (And all of this is made worse in the summer months because no one here has air conditioning and everyone sleeps with their windows open.)

It’s another area where cultural norms are different, and it makes them hard to navigate.  I hope that my neighbors understand, or even better, that by some trick of architectural acoustics they aren’t particularly bothered by it.  But I wonder how I would ever even know what they think about it (and I wonder how Austrian parents would handle the same situation).

Every September, some of our neighbors put together a block party – a Hoffest – which more correctly translates as a “courtyard party”, which makes sense, since it’s held in one of the four courtyards of our building.  Everyone in the building is invited, whether they live or work here.  We all bring some food or drink to share, someone brings a grill, someone puts up balloons.  Our first year here, we went, and we made an effort to meet people and connect, but being new and knowing almost no German, it was daunting (although we did get a very neat tour of the hidden catacombs below our building).  Last year, we were on vacation in early September.  But last Friday we got to go to our second Hoffest, and it was a great success. 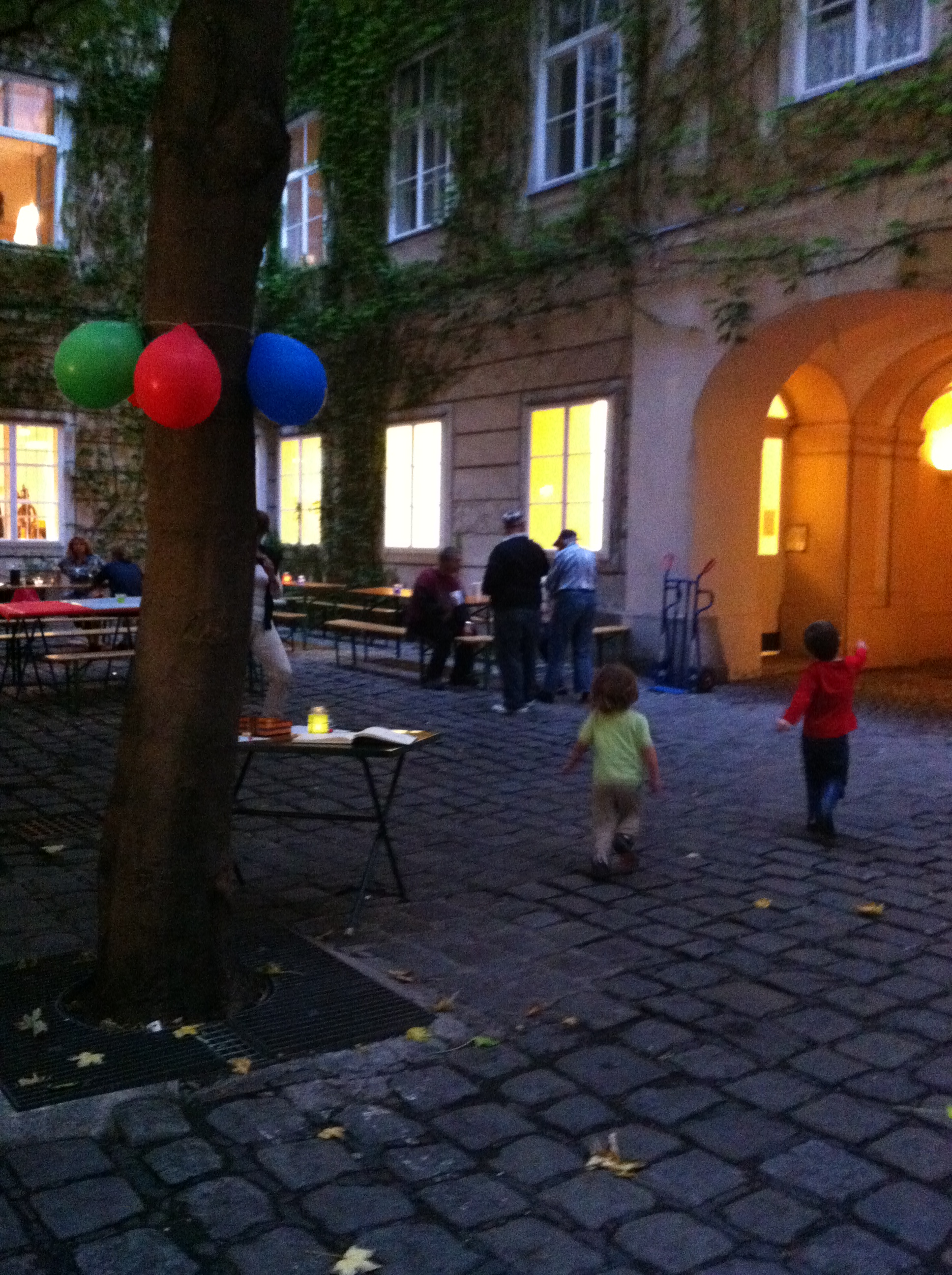 It was really lovely, and our comfort and ease with our neighbors and with the language were a striking contrast to last time.  We ate, we socialized, we met new people.  The kids ran around and played, made new friends and ate too much cake.  We stayed for hours and visited with our friends and neighbors.  Last time, I remember gritting my teeth and smiling anyway and getting through it.  This time I chatted and smiled and left because it was getting late, but I had a few more people I wish I’d gotten to talk to.  It was exactly what a neighborhood party should be, and we were definitely a part of it.  It felt so normal . . . that it actually felt strange.  We’re so unaccustomed to not fitting in and being on the outside that being included was odd (but so very nice).

We feel pretty well accepted here.  We’re still “the Americans”, but we’re no longer “the new people”.  We still don’t speak a lot of German, but we don’t have to begin every conversation by asking if the other people speak English.  We have friends here, we know our neighbors.  It is so nice, and normal, and comfortable.  It seems like a little thing, but it’s a milestone I wasn’t sure we’d ever reach.

Another beautiful Sunday here in Vienna.  The last few weekends have been like this, and each time, we think it’ll probably be the last one.

I’m holding out hope for yet one more, because I was sick again today and missed out on enjoying the beautiful autumn weather.  I didn’t leave the house.  I didn’t do anything, except sleep and occasionally attempt to keep my children from meeting an early demise.

Dan did a great job of wrangling everyone, but I’m also incredibly grateful for our downstairs neighbor.  She called up earlier and invited us all to join her family for a picnic in the park and some of the cake she was baking.  I was too sick to go, but Dan and the boys took her up on her offer.  From all accounts, they had a great time (and they even brought some cake back for me — yummy!).  They ate cake, my neighbor’s oldest daugher played endlessly with Benjamin (and a little with Liam) and Dan got to chat with our neighbor.