Is it possible, little one, that there will come a time when you don’t know how special you are?  Your open mouth, your tightly curled fingers, your little body snuggled up against me.  Here, while you sleep in my arms, is a perfect moment.  I wouldn’t change a thing.  I love to feel your soft breath and see your eyelids flutter while you sleep.  My sweet baby.  I am awed and grateful to have been given the responsibility of being your mother.  When you are awake, you embrace life so thoroughly — running, laughing, cuddling, smiling, demanding what you need.  And as you sleep, you are so content.  You are such a happy child, and so comfortable and confident in who you are.

END_OF_DOCUMENT_TOKEN_TO_BE_REPLACED

I laugh when I read information about how much little kids and babies are “supposed” to sleep.  My children never got those memos.  When he was a baby, Benjamin hardly ever slept for more than 2 or 3 hours in a row.  He’d sleep for a few hours at night, and then he’d get up, I’d feed him, and Dan & I would take turns walking with him for an hour or two (or more) until he finally went to sleep, and then he got up 2 or 3 hours later and we did it all again.  This isn’t abnormal for a newborn’s first few months, but this went on through and beyond his first birthday (and it had gotten old well before that).  He started sleeping through the night reliably sometime between 18 months and 2 years, but he didn’t nap for more than 20 minutes at a time until this past spring, after we moved here.  Now, he’s a sleeping champ — sleeps about 9 hours at night, and another hour or two (sometimes more!) during the early afternoon.

Liam is an excellent nighttime sleeper, and has been since he was about 4 months old.  He often needs to have his pacifier replaced a few times per night, but other than that, he very rarely wakes all the way up and almost never needs to be fed or cuddled with at night (and I don’t think we’ve ever walked him to sleep).  However, he takes after his big brother when it comes to naps.  As a newborn, he was a great napper — he would sleep 2-3 hours each morning.  It was nice, when he first came home, because it gave me an opportunity to spend a few uninterrupted hours with Benjamin every day, which helped to ease the transition from only child to big brother.  But, since we’ve been here, he’s been off naps completely.  Most days, he doesn’t take a nap at all.  At all.  Not once.  All day long.  If he does nap, it’s maybe 20 minutes long, and only if I hold him.  And then, it’s likely that Benjamin will wake him up “by accident” (or occasionally, actually accidentally).  The rare occassions when I can get him down for 10 or 20 minutes during the day are a thrill and a relief — I love my babies, but getting a few minutes of a break is lovely.

Three weeks ago, I started taking German class three days a week.  I’ve tweaked the schedule to figure out the best time to leave the house, and generally settled on starting to get everyone ready about 9:45 in the morning.  This past week, Liam has decided to drift off into a deep nap at 9:30.  But just on Monday, Wednesday and Friday.  This Friday, I actually had to wake him up in order to get out of the house in time to make it to class.

My class is over in about 10 days, but shortly after that, Benjamin starts preschool.  Here’s hoping that Liam’s new nap habit can survive the changes, and that he doesn’t take to napping right when I need to leave to pick B up from school.  Nothing is worse than having to wake a napping baby, except having to wake one that doesn’t usually nap. 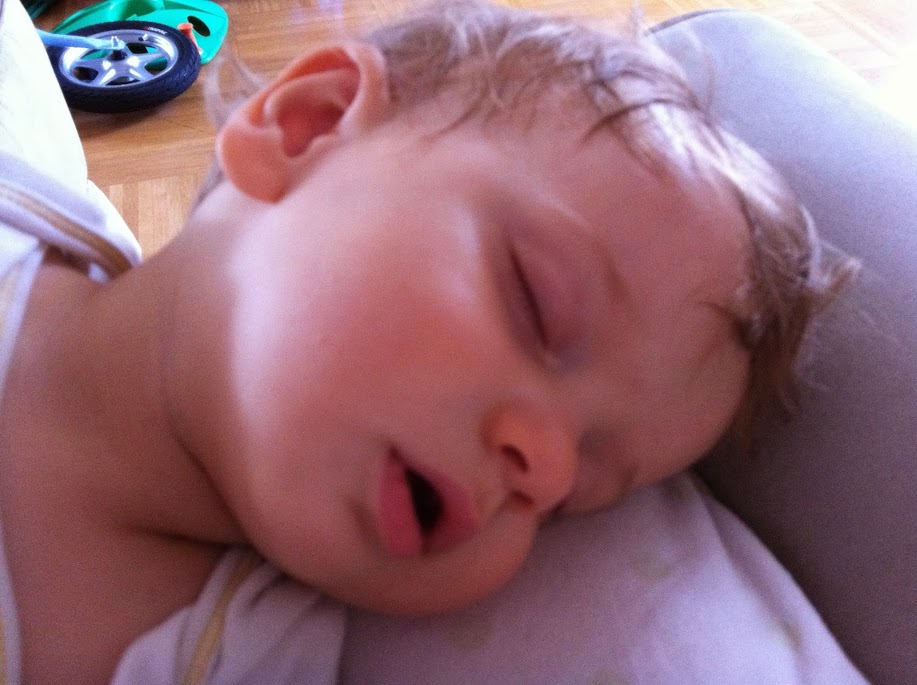