We had another great day in Innsbruck. We took the funicular, and then two cable cars, up the Nordkette — the massive mountain to the north of Innsbruck. It was snowing today, and while that was fun and very seasonal, it obscured what would have been a breathtaking view with clouds and fog.

END_OF_DOCUMENT_TOKEN_TO_BE_REPLACED

We’ve been in Austria for nearly 5 months, and there’s been something lacking from our experience so far:  mountains.  Today, we rectified that omission.

We headed out this morning — we were trying for “first thing” this morning, but didn’t actually leave the house until nearly 11.  As it always seems to happen with kids, the preparation and departure took far longer than expected.  We took the U-bahn to the train station and boarded a train (a big, double decker one) that took us an hour and a half southwest of Vienna.  We were a little concerned about two hours of train travel with the kids, but it actually went fine.  The scenery was varied enough to keep B busy for a while, and Liam promptly fell asleep.  I was planning on using my iPhone to entertain B if necessary, but I didn’t need to.  The time passed really quickly.  After we left Vienna, we were quickly in the countryside, and

the hills and plains gave way to mountains and valleys — it was beautiful.  The mountains in this area seem to be very large, green and steep . . . less rolling than the Blue Ridge at home, and bigger, too (I think).

Our train dropped us off at a tiny train station outside of a tiny town, and we hopped on a bus.  The little town we rode through was beautiful.  Surrounded by huge mountains, full of cute little Austrian houses with pink and purple flowers spilling out of the flower boxes, a crystal clear stream running through the town.  I rode on the bus, looking foolish with my mouth popped open nearly the entire way.

After our short bus ride, we got out, climbed up a very steep set of steps and bought our tickets for our gondola ride up the mountain.  We explained to Benjamin that it was kind of like a flying train car — which turned out to be quite apt.  I’ve been on ski lifts before, so I expected this to be like that, only larger and enclosed.  And, it was, roughly.  But in a whole different league.  This thing zoomed up the mountain, bumping and swaying.  There are windows all around, so you can see gorgeous mountain views, all while being whisked up about a mile in just over 5 minutes.  I had not really expected how high this mountain was — we just kept going up and up an up!  The three hours in transit were almost worth the gondola ride alone. 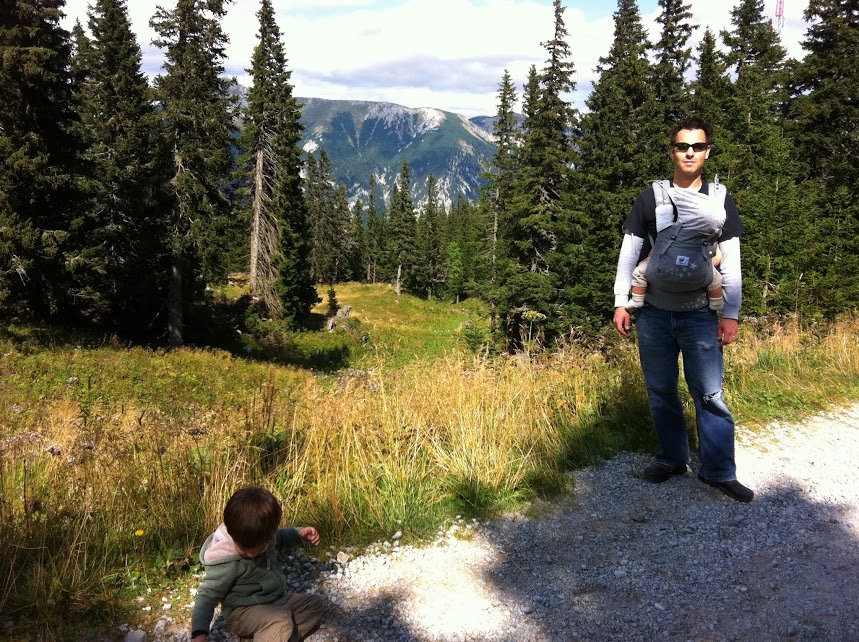 But, then we got to the top and stepped out and were stunned by the views, by the feeling of the air, by everything.  It was exactly what I wanted it to be — gorgeous, cool, crisp and fresh.  The air felt and tasted like early spring and smelled like Christmas.  Benjamin immediately requested his sweatshirt (which he shortly abandoned, once we started actually walking).  We could see down into the valley we had just come out of, as well as look across at huge mountains we had been gazing up at from the valley floor just a few moments before. 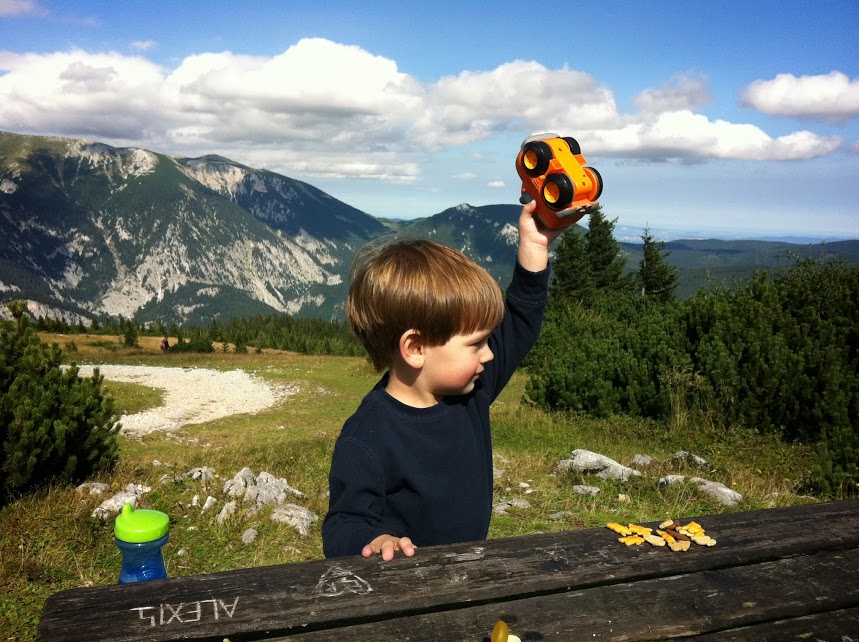 After appreciating the vistas, we decided to go for a short hike.  The trail map listed a loop that went from where we started, up a “moderate” slope, to a little cafe about 35 minutes walk away, and then back again (another 35 minutes).  Not in a hurry, and

wanting to enjoy ourselves, we figured that even with Liam in the Ergo and Benjamin walking, we could probably do the walk in an hour or so.  We set off, up the hill, through the meadows of mountain laurel and forests of perfect Christmas trees..  About 90 seconds into the hike, Benjamin was asking for a break.  We continued a little further, found a picnic bench and took a break, and then continued on, still climbing.  We actually climbed high enough that we realized, looking around, and looking across at the other mountains, that we had, apparently, reached the top of the tree line.  We still had lots of ground plants and even a few stunted pine trees (pine bushes?) but no more trees.  We walked and we walked, up and up.

There were two things wrong with our “hike to the cafe” plan.  1.  The 35 minute walk that was described was estimated by an Austrian.  They walk faster, and are generally in better shape than Americans.  They take their walking, particularly mountain walking, very seriously.  (It’s not uncommon to see people walking through Vienna — which is pretty flat — with what look like ski poles.  It’s apparently called “nordic walking”.  Up on the mountain, nearly everyone had these ski poles/walking sticks.)  2.  The “moderate slope” bit was also, I imagine, described by an Austrian.  We were not, at any point, in danger of falling to our deaths, and neither were we required to rappel up or down anything.  So, I guess that means it’s moderate.  (In their defence, there were a lot of people doing this walk who did appear to find it only moderate, including quite a few who were probably twice my age and at least one young man with an artificial leg.  So, again, I suspect the issue is that my American idea of “moderate” does not match with an Austrian idea.)

It didn’t matter — we had a great time.  We probably got about halfway to the cafe (we estimate) in about 45 minutes.  We sat at another picnic table to rest, and to feed and change Liam, and decided not to go on any further.  Benjamin had a great time playing on the mountainside.  Dan and I enjoyed the views.  Liam wanted to get down and crawl around (we limited his independent mountain exploration to the blanket we brought for him).

After soaking in the sun, the air and the sights, we decided to head back, and opted for an “off the trail” trail that we were sure would parallel and join up shortly with the well marked, well worn and well travelled trail we had come up on.  It didn’t.  We hadn’t gone far when we realized that instead of going steeply (sorry, “moderately”) downhill, as we should be, we were staying level . . . or maybe even climbing very slightly.  Hmm.  We came out from a wooded section of our trail, and my stomach did a little flip when I looked down, several hundred yards, to see the trail we had been aiming for, and no apparent way to get to where we wanted to be.  We didn’t panic, but I admit to being a bit concerned and having pieces of episodes of “Survivorman” and “I Shouldn’t Be Alive” run through my head.  We had our bearings, though, and continued on, choosing paths that brought us closer and closer to where we needed to be.  We came out into another clearing (which actually turned out to be a cleared area under a ski lift) and found we were now only about 50 yards (of “moderate” slope, full of weeds and undergrowth but nothing too bad) above our path.  Woo hoo!

We made it back and treated ourselves to ice cream (me and Benjamin) and coffee (me and Dan) before heading back down on the gondola.  (Which goes down faster than it comes up, creating a definite roller coaster feeling of leaving your stomach behind). 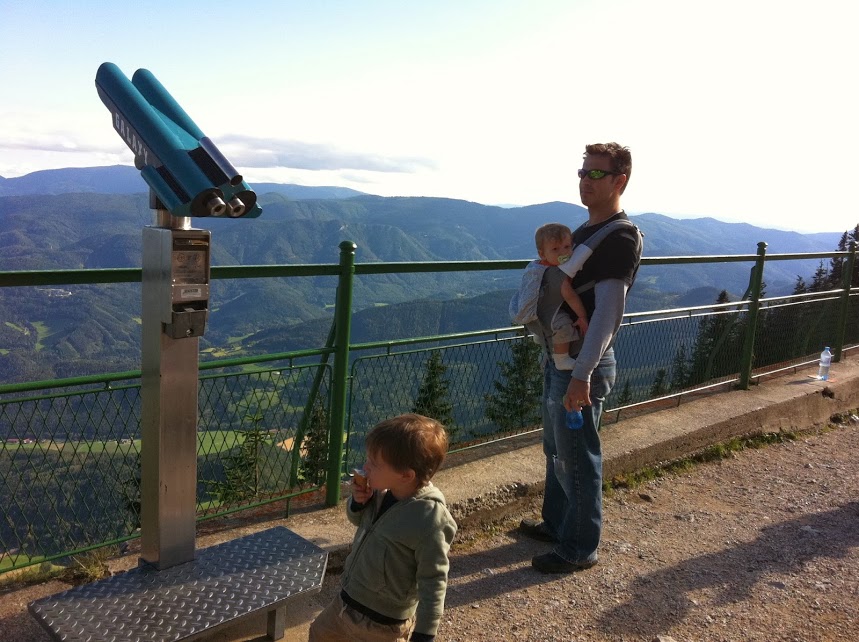 It took us about twice as long to get there as we actually spent on the mountain, but it was totally worth it.  We trekked out of Vienna, got up to the top (kind of) of the mountain, hiked around, got lost, found our way, and made it back home.  Our kids are tired, but happy.  That’s definitely a success.  I also impressed myself (and probably Dan, too) by going with the flow.  I actually let him make the travel plans, and I didn’t once stress about what time we had to be anywhere.  This is very much unlike me, but I’m finding that the energy I spend trying to make things work out perfectly really gets in the way of having a good time, and doesn’t gain me much in terms of the experience.  I’m discovering that it’s worth risking having to spend an hour standing around in a beautiful location because I didn’t optimize my train/bus connection if it means that I’m not watching the clock the entire time and stressing out about what’s supposed to happen next instead of enjoying what’s happening in the moment.

We had a great day.  I don’t know if the hills are alive, but we really enjoyed them.