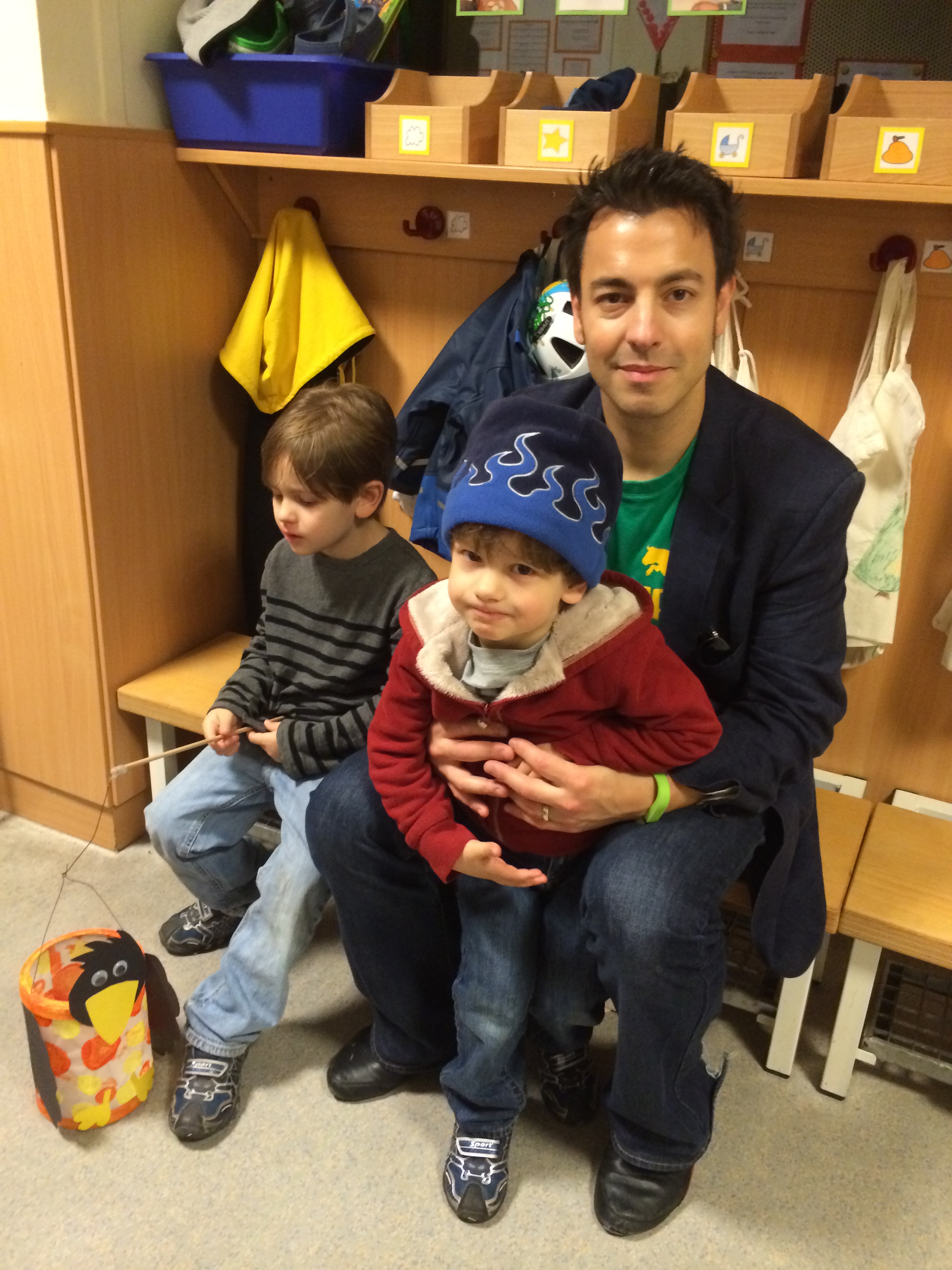 I’ve often said that of all the new traditions we’ve discovered in Vienna, Lanternfest is my favorite.  I love watching the kids with their homemade lanterns out in the autumn evening, I love their songs, I love the story of St. Martin and the moral of charity and kindness.  I’m a fan.  Benjamin got to do Lanternfest all 3 years he was in preschool, and last year the boys got to do it together (which I particularly loved).

Because it happens in the dark, it can be tough to see — especially for the kids, who are holding lanterns, it’s hard for them to pick out the faces of their parents beyond the glow of their own lanterns.  So, even though the school practices for a few weeks leading up to it (but only in the daytime), there are always a few of the little ones who dissolve into tears once the parade and singing start. 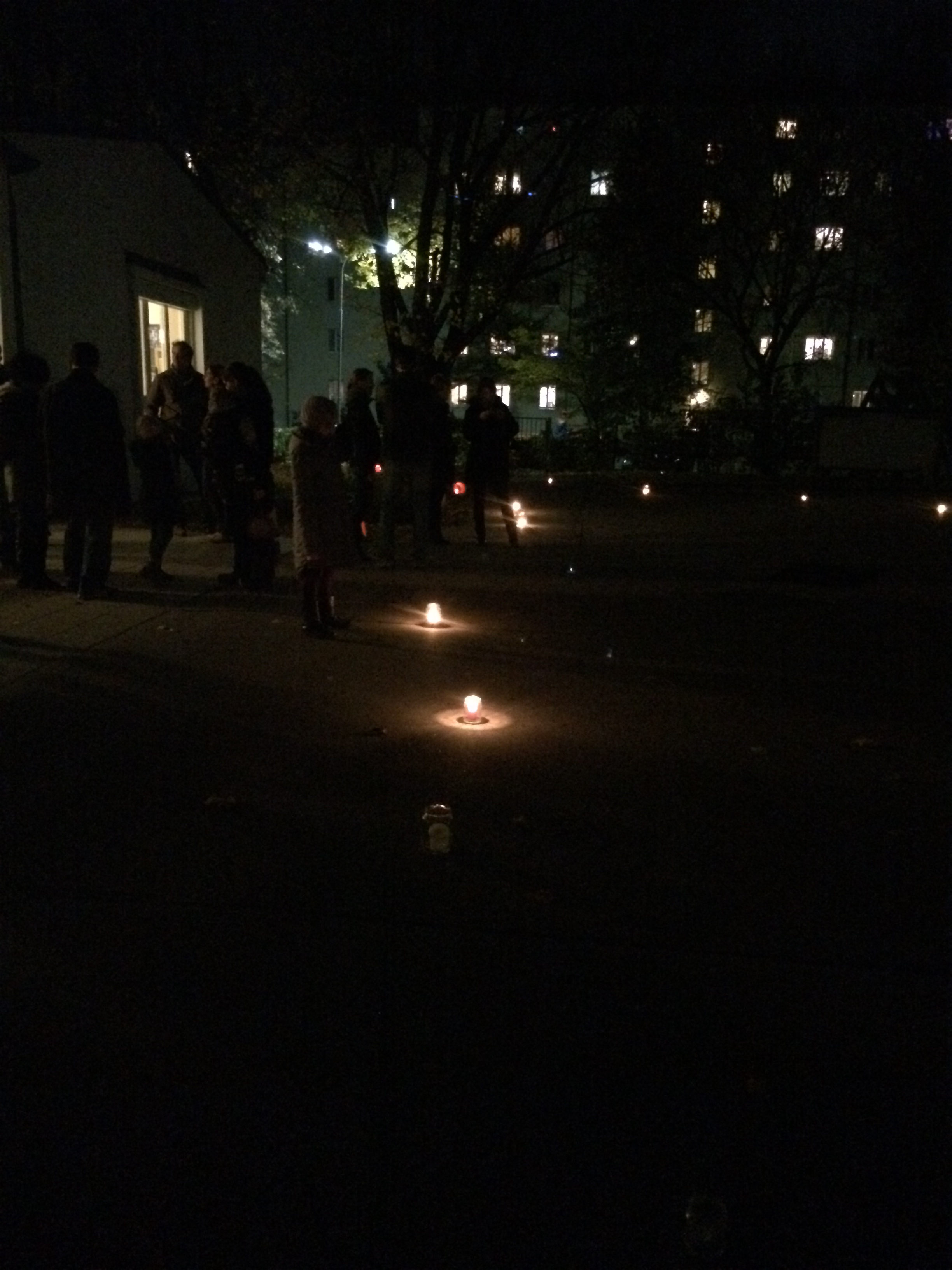 It happened to Benjamin his first year — he got freaked out by not being able to find us in the dark.  One of his teachers brought him to us (because, in the dark, it was equally impossible for us to tell that he was the one who was upset) and he was able to finish up the performance, just holding my hand.  After that first year, he was fine.

With Liam, we were lucky, since he had the advantage of having seen the whole thing several times by the time it was his turn to do it.  He was finally getting his wish and was up there with the “big kids”, so he was more excited than worried!  Besides, Benjamin was participating too, so he wasn’t there alone (not that any of them is there alone — there are 60+ kids at the school, plus teachers and parents, but a lot of the kids still experience it as being “alone”).  He did great last year. 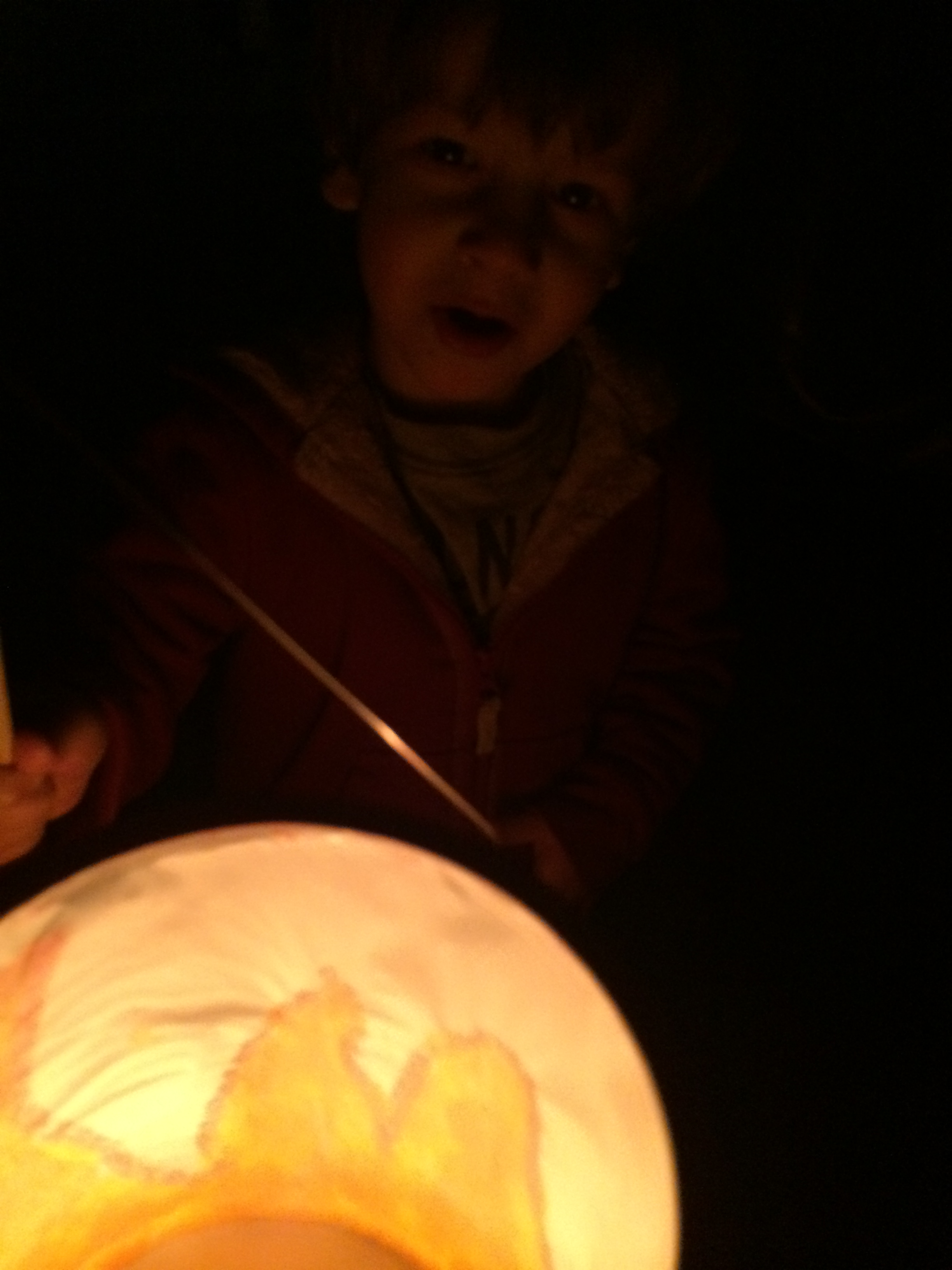 So this year, our collective fourth Lanternfest, and Liam’s second as a participant, we expected smooth sailing.  B was a little sad to not be involved, so we dug out his old lantern from last year and he brought that along to hold while he watched.  We took Liam to his class, dropped him off with his teacher and went to find a good spot to watch the show.

Liam didn’t make it to the show, though.  For reasons I don’t entirely understand, Liam freaked out before it was even time for the kids to line up.  He was so upset that his teachers simply brought him out to us, where we were waiting in the dark.  He was too freaked out to participate.  Last year, we dropped Benjamin off first, so he was unfazed by us dropping him at his class.  This year, I guess the thought of us leaving him inside while we all went out just worried or upset him.  I offered to walk with him, or to stand by him.  I tried (repeatedly) to convince him to rejoin his class.  I reminded him of how much he’d been 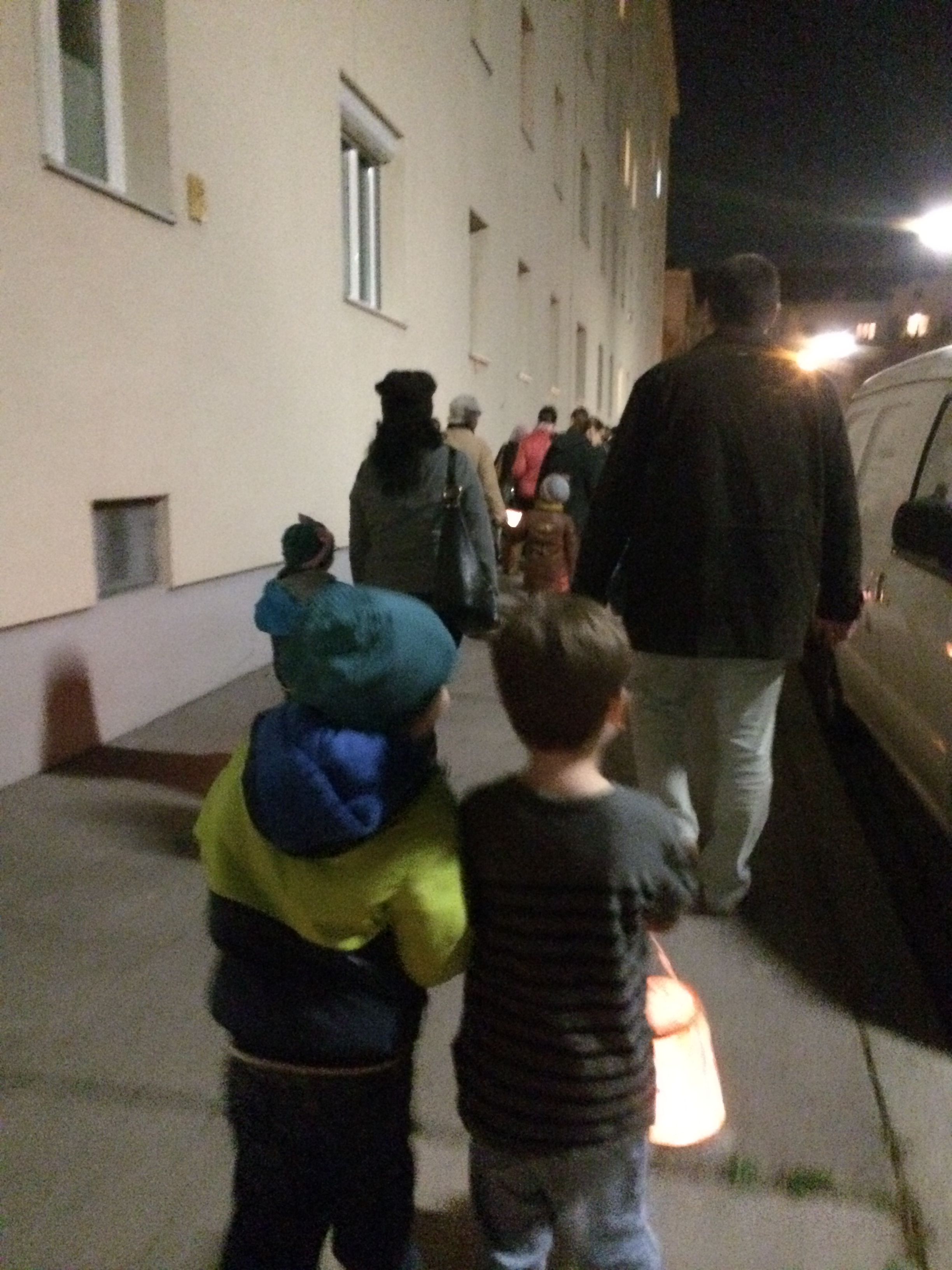 looking forward to it and how much he’d enjoyed it the year before.  He declined.  I was surprised, but he was firm.  So, rather than walking and singing with his lantern, Liam stood with us and watched.

For the second part, where the kids and parents go on a stroll around the block, he was happy to join in.  We all took a walk together and shared a kipferl (kind of a hard croissant) at the end, as is traditional.  Liam was clingy, but happy.  Benjamin was wistful, but also happy.  It was another good Lanternfest, and I’ve officially decided to quit thinking that I have any idea of how these things are going to go from one year to the next. 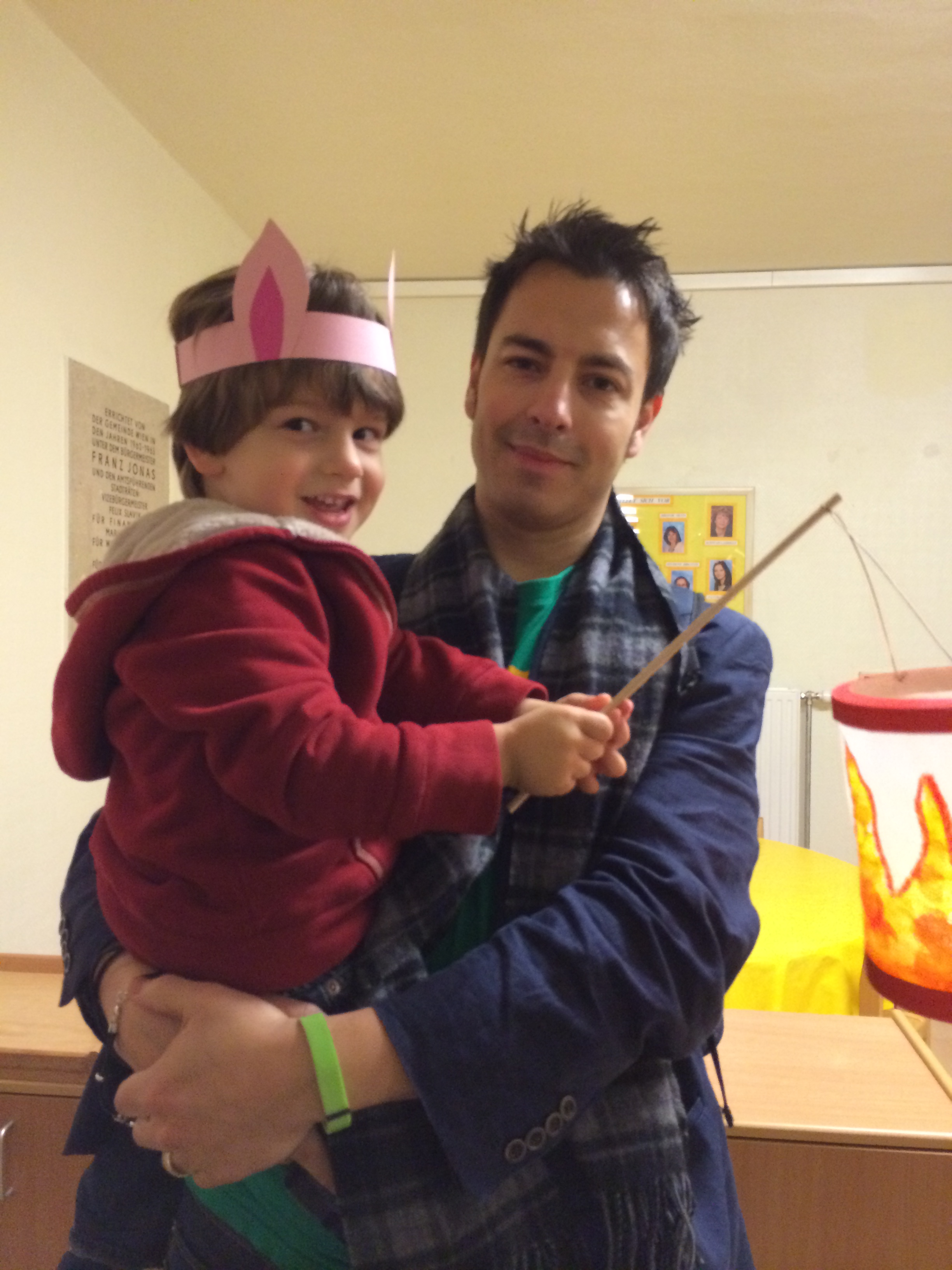 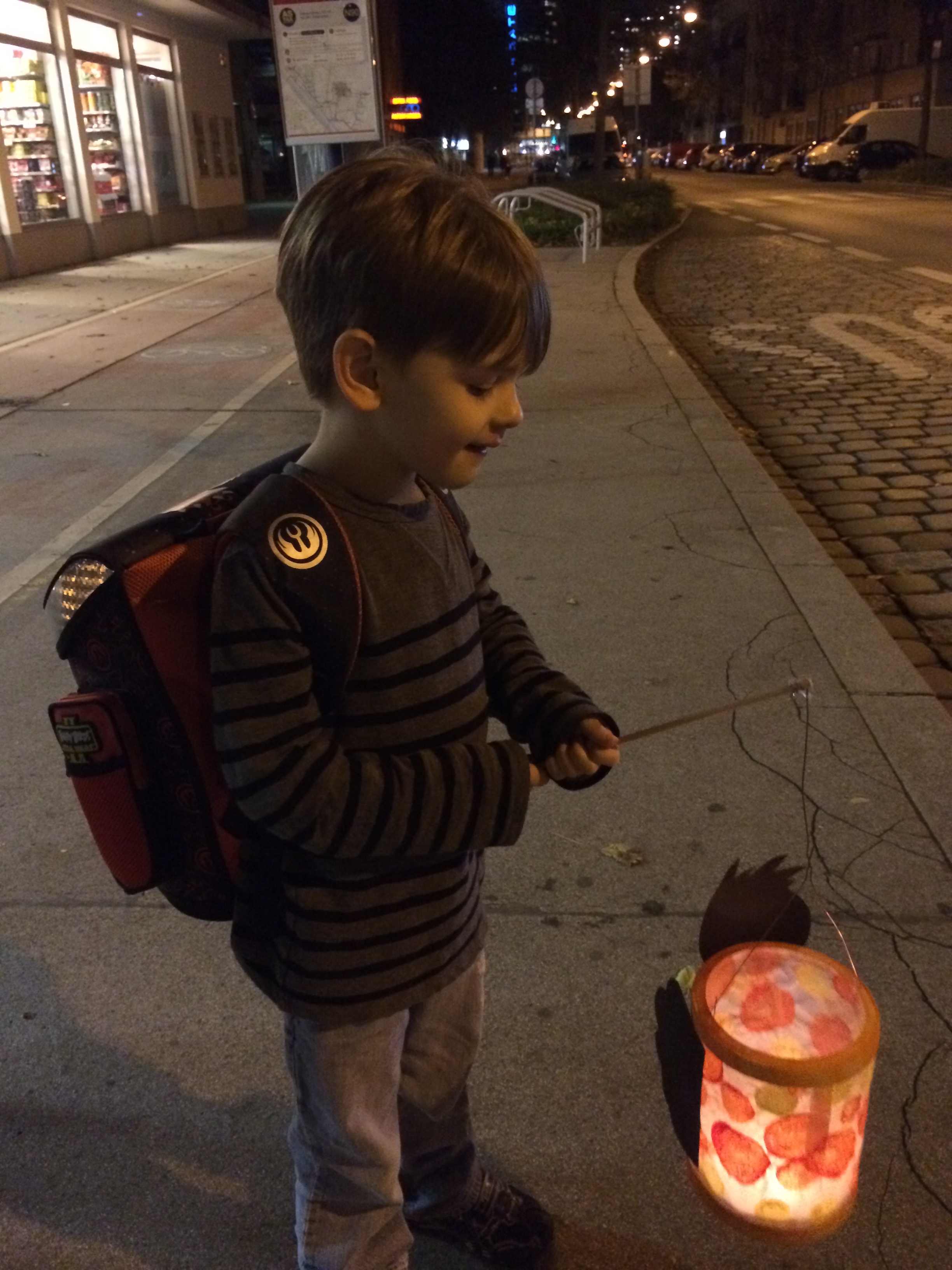 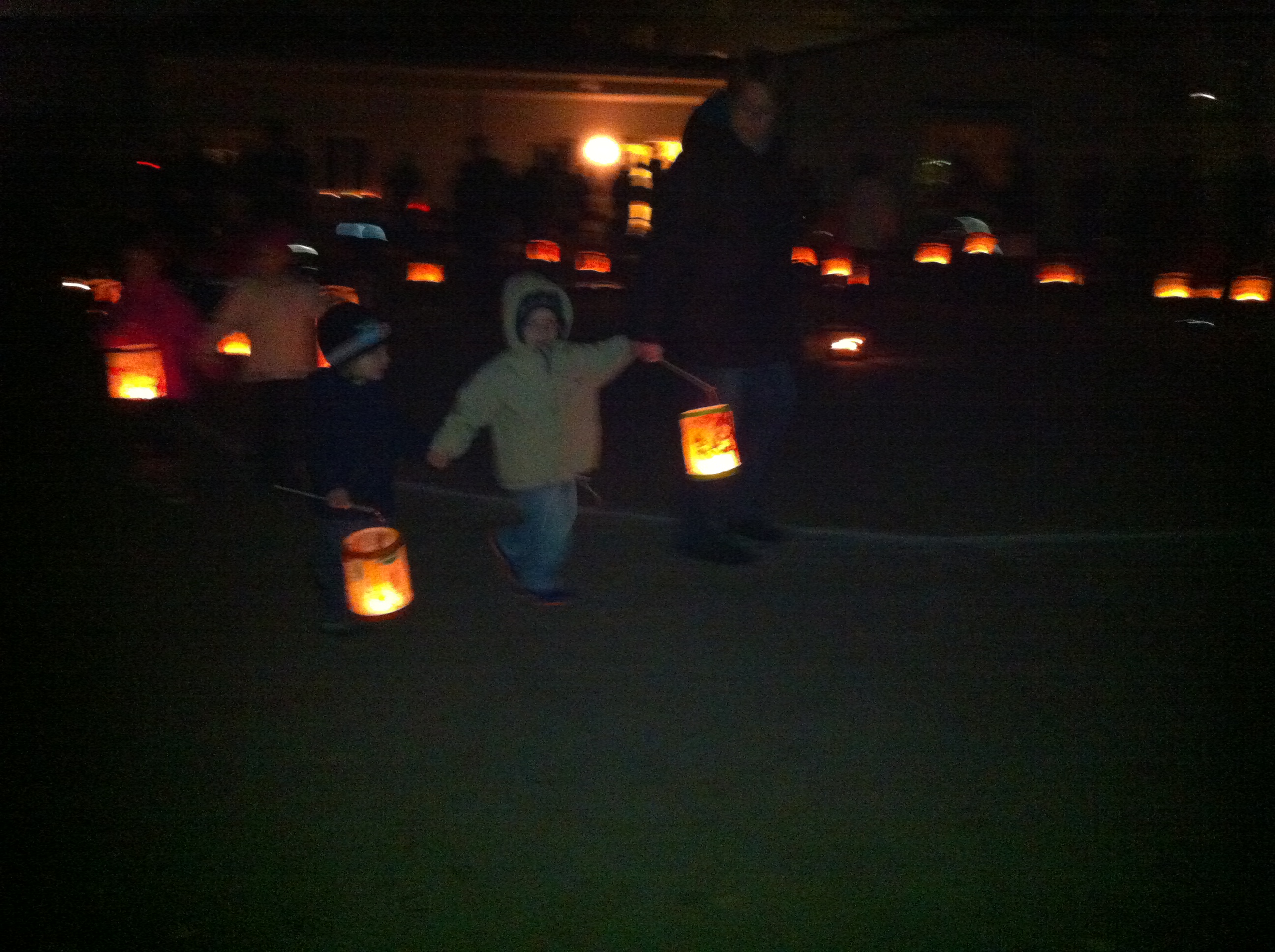 Last night, we attended our third lantern fest at the kids’ school.  It is my favorite Austrian tradition, and it was extra special because this time, both boys participated. 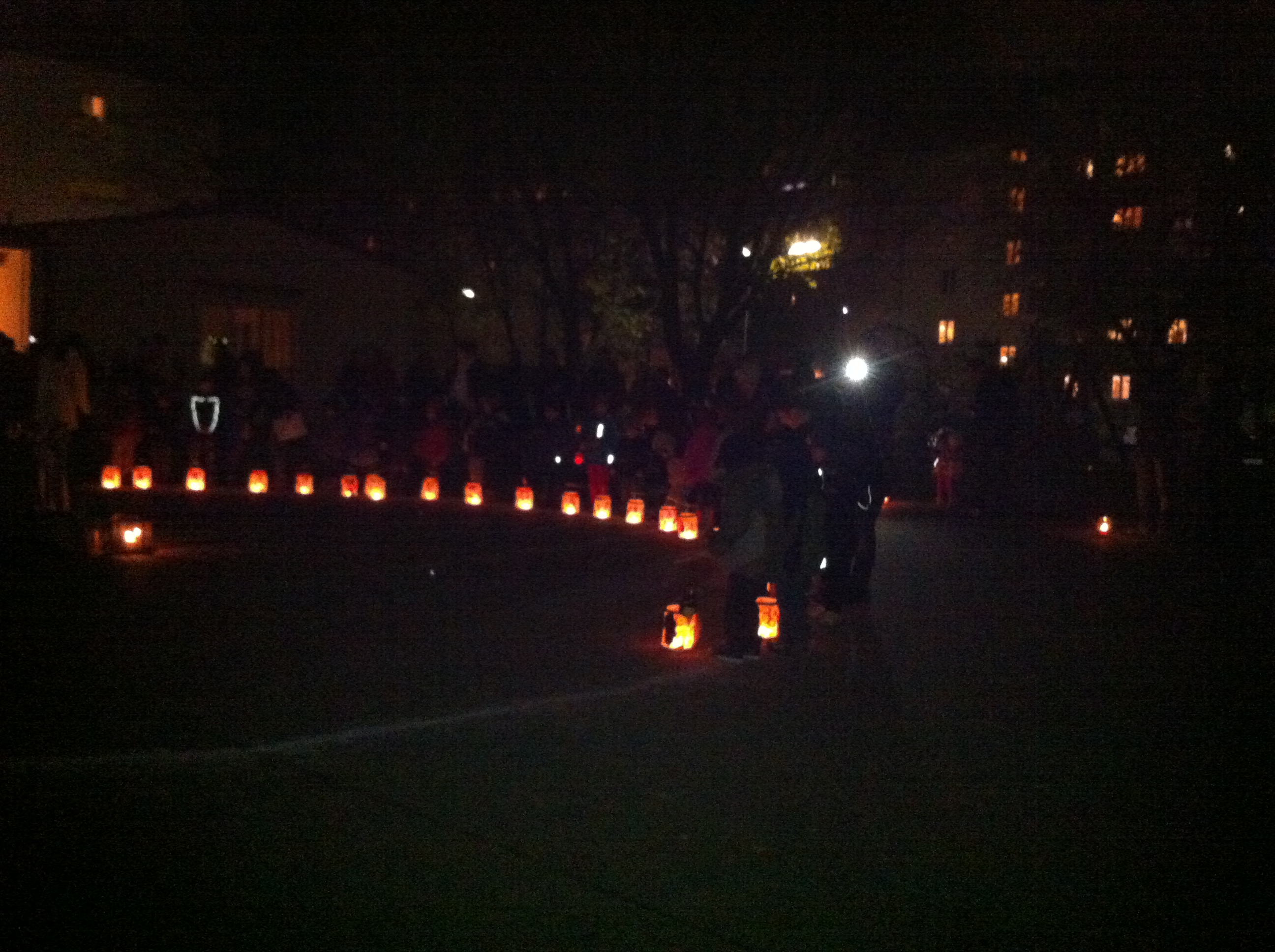 Benjamin takes his place (second from the camera)

It’s a wonderful evening.  All of the preschool kids at the school (about 60 of them), each holding a homemade lantern constructed of cardboard and waxed paper and containing an actual, lit candle, parade around the garden with their lanterns, singing, while the parents all take tons of pictures.  After a brief performance by the bigger children, explaining the celebration of St. Martin (Benjamin was a tree!), the parents take their children by the hand and we all go for a walk around the block in the dark, singing.  After our parade around the neighborhood, we all return to the school for Kipferl (like a croissant, but not flaky), warm drinks and a little socializing.  It’s fun, festive, and very sweet (if always a little cold to be outside for an hour). 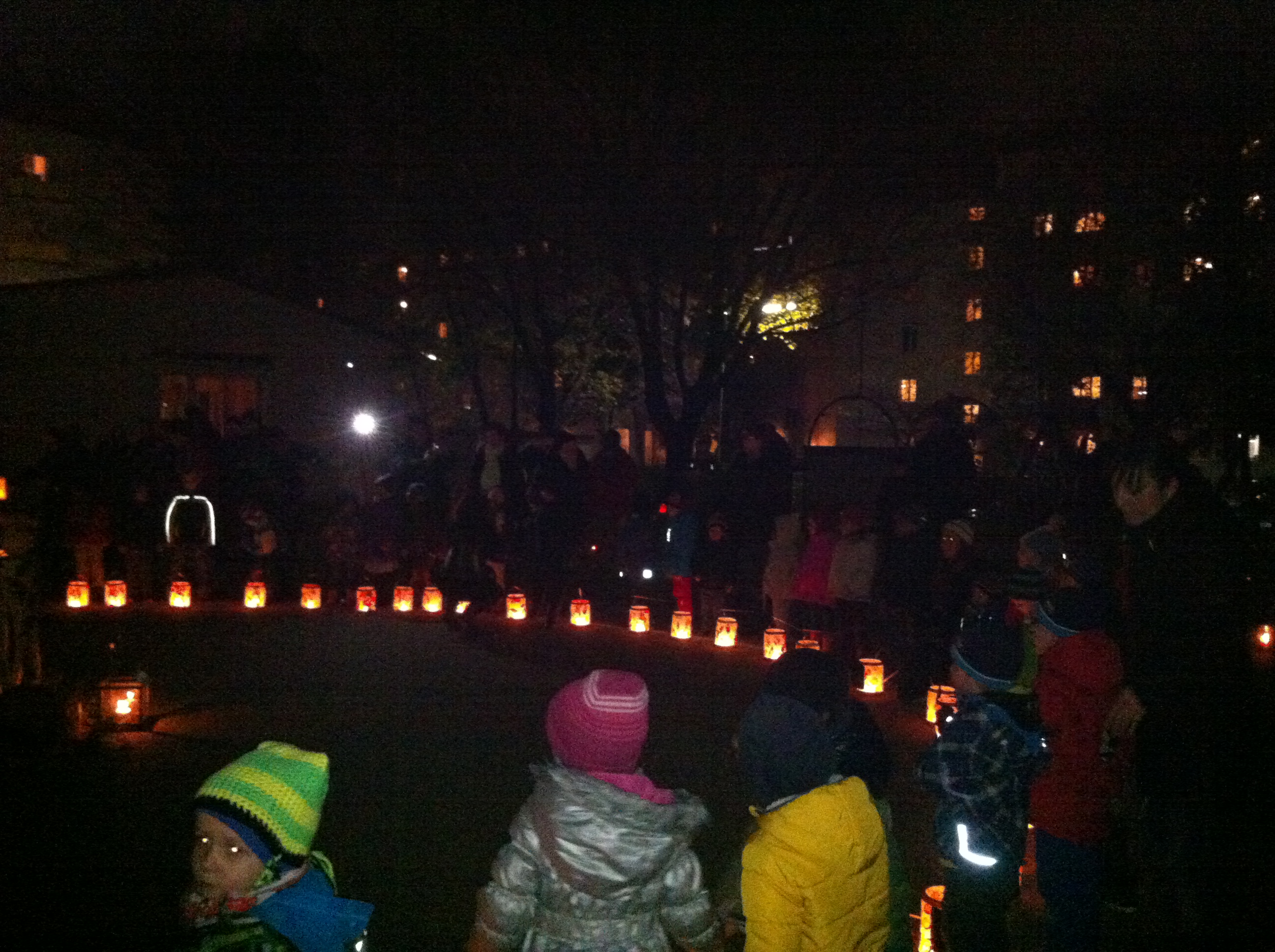 I love this tradition, and so do the kids.  For us, as Americans, it’s also a little astonishing — with the candles and paper lanterns, I’m certain something like this would never happen in the States.  (Some other parents we mentioned this to last night l 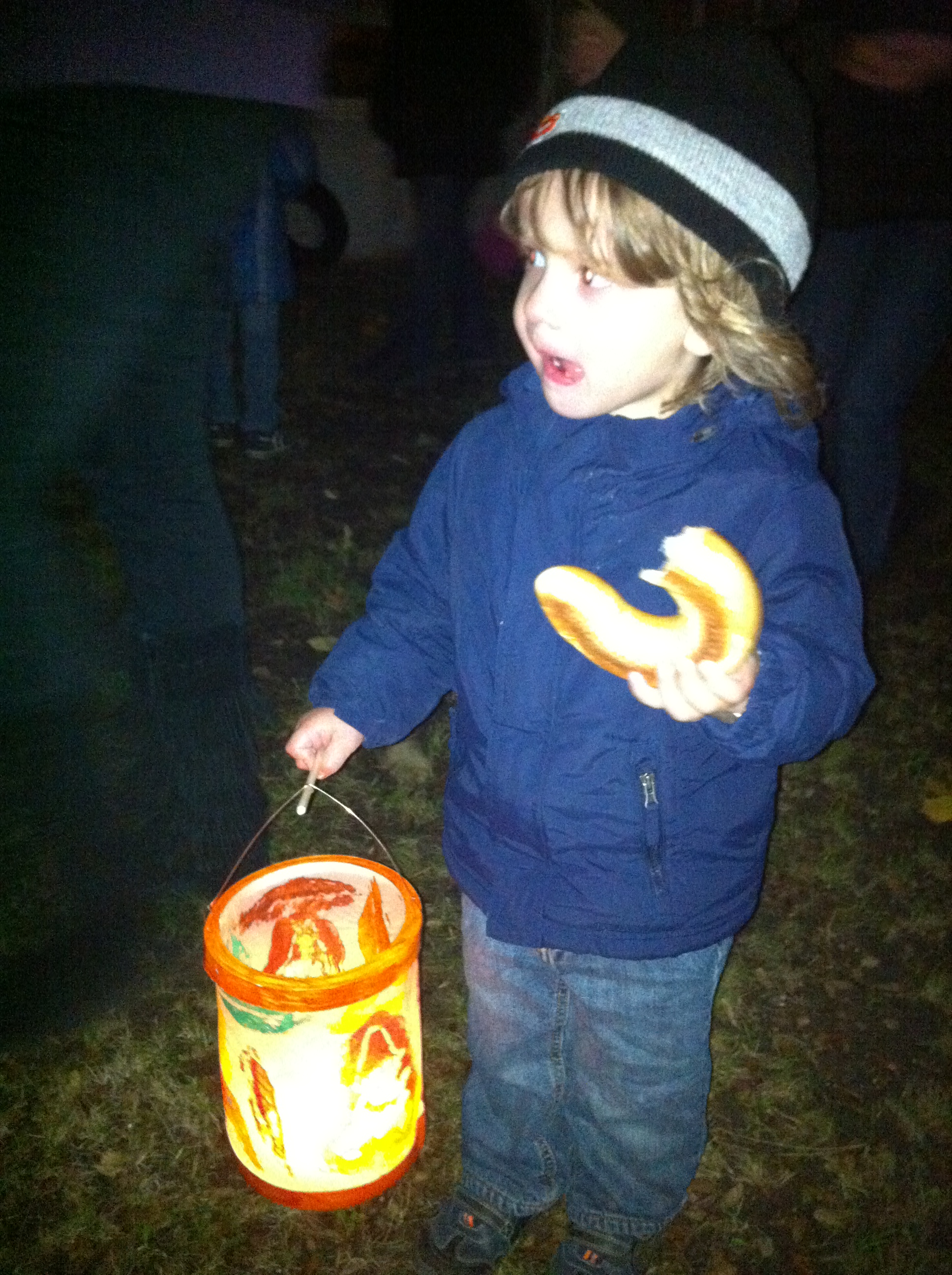 iterally did not believe us.  They thought we were exaggerating when we explained that it’s darn near impossible that a school in the US would allow 60 3-6 year olds to walk around in the dark carrying paper lanterns containing actual candles.  Their response was, “No way!  They’re just candles!”)

(Also, on further reflection, I’m pretty certain that this tradition is part of why Halloween hasn’t much caught on here.  The tradition of celebrating the Feast of St. Martin contains many of the same elements — lanterns, walking around the neighborhood in the dark — but without costumes or candy.) 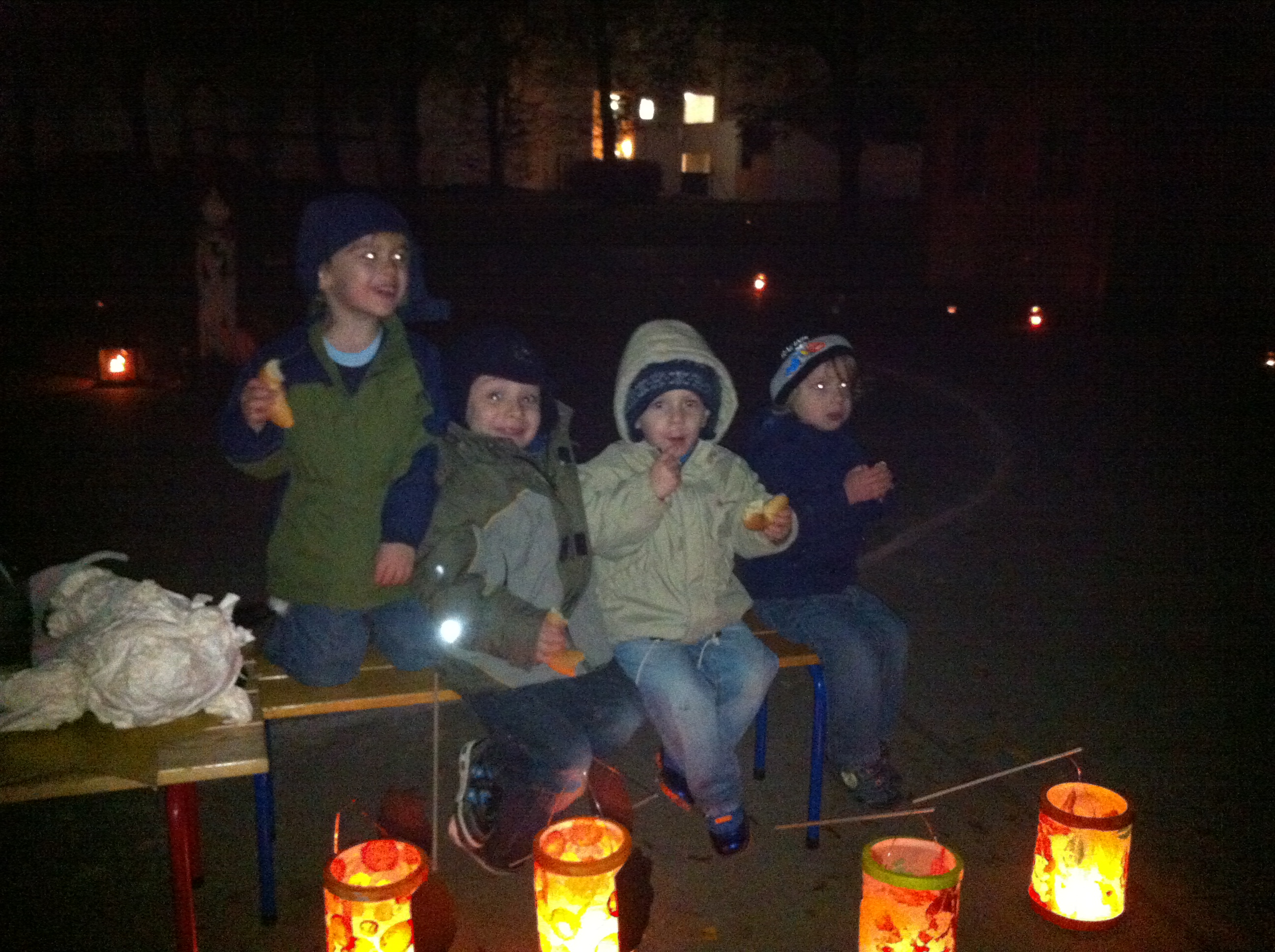 Benjamin, Liam and their best friends

The boys both did great.  They looked for Dan and I right away and were so happy to have us there.  Liam was composed and happy throughout, and B performed excellently as a tree during the short play relating the story of St. Martin.  I walked around the block with Liam, while Dan walked with B and his class.  All of the kids did great with their candle-filled lanterns.  (Although injury seems inevitable to my mind, this is our third year, and no one has ever gotten hurt by the lanterns, nor set their lantern on fire, nor poked anyone with the sticks they’re carried by.  Go figure.) 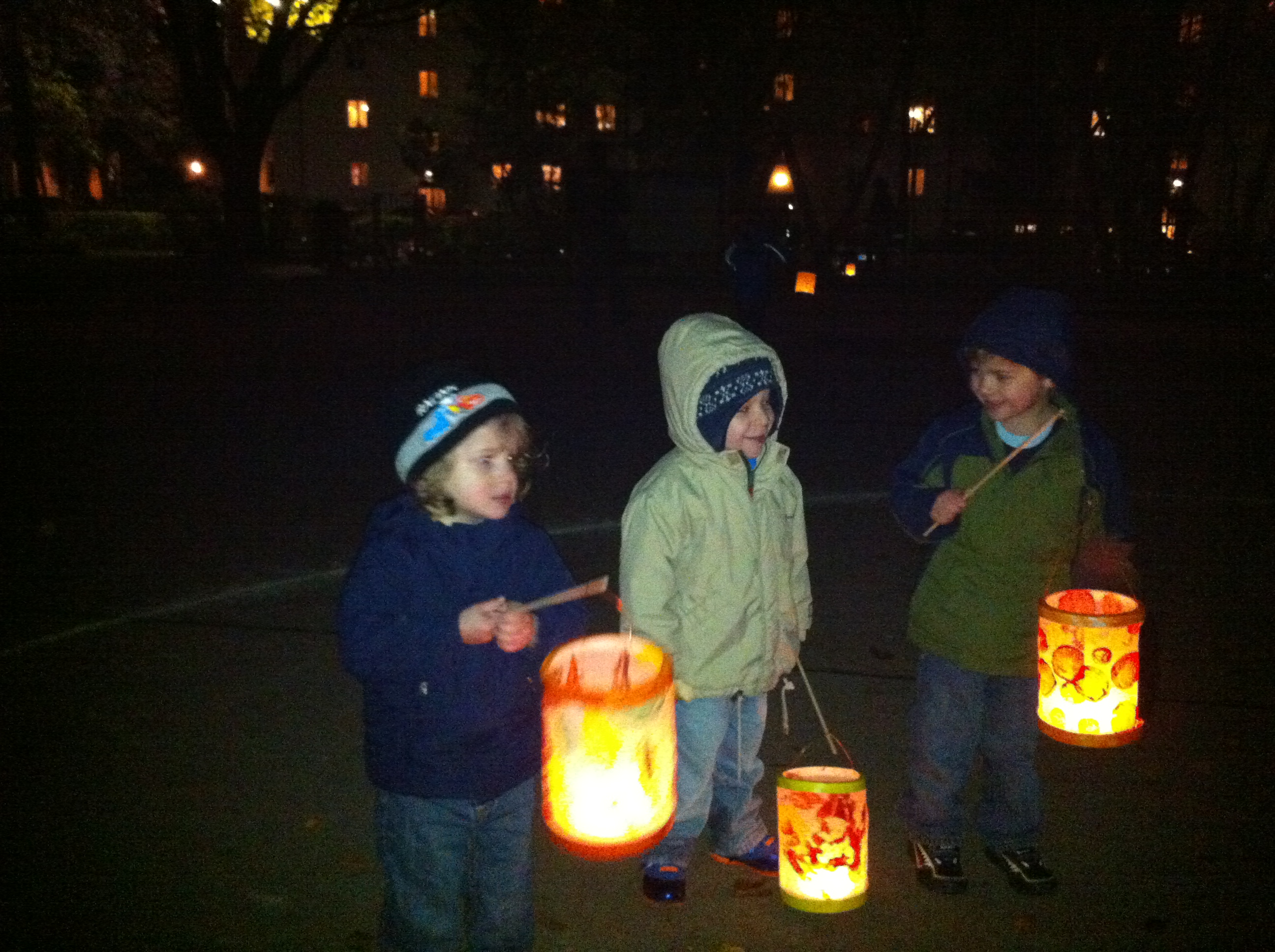 I am so glad that my boys, and indeed our whole family, has gotten to participate in the tradition here.  I love it.  And now, officially, it’s time to start celebrating Christmas in Vienna.

Benjamin’s school hosted a “lantern evening” tonight.  Other than assuming that lanterns would somehow be involved, we really didn’t know what to expect.  I suspected there was going to be a performance of some kind, because Benjamin had been talking about “practicing his song” at school this week.  Excited about B’s first school “concert”, we went to the school this evening and assembled in the garden to see what would happen next. 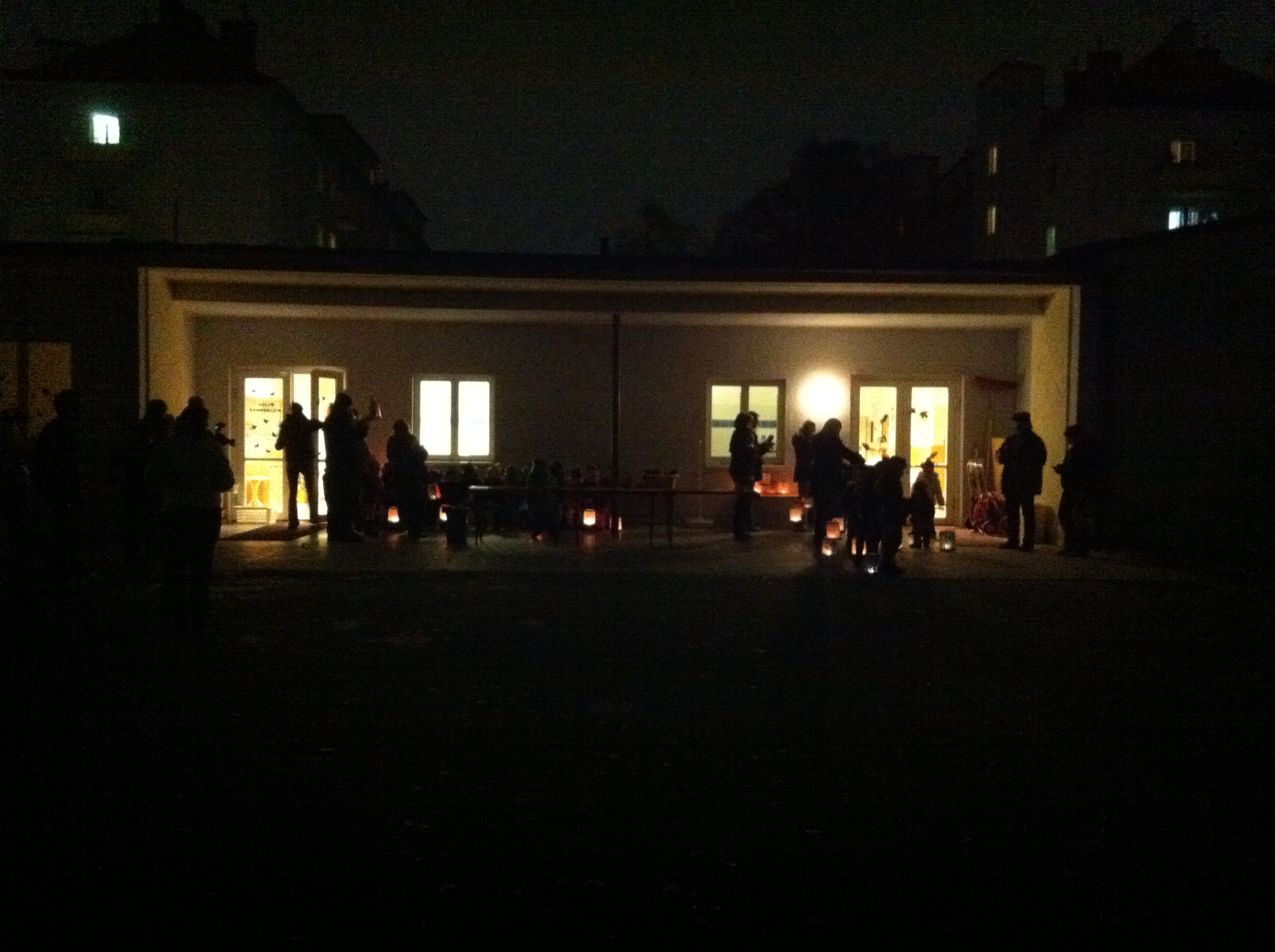 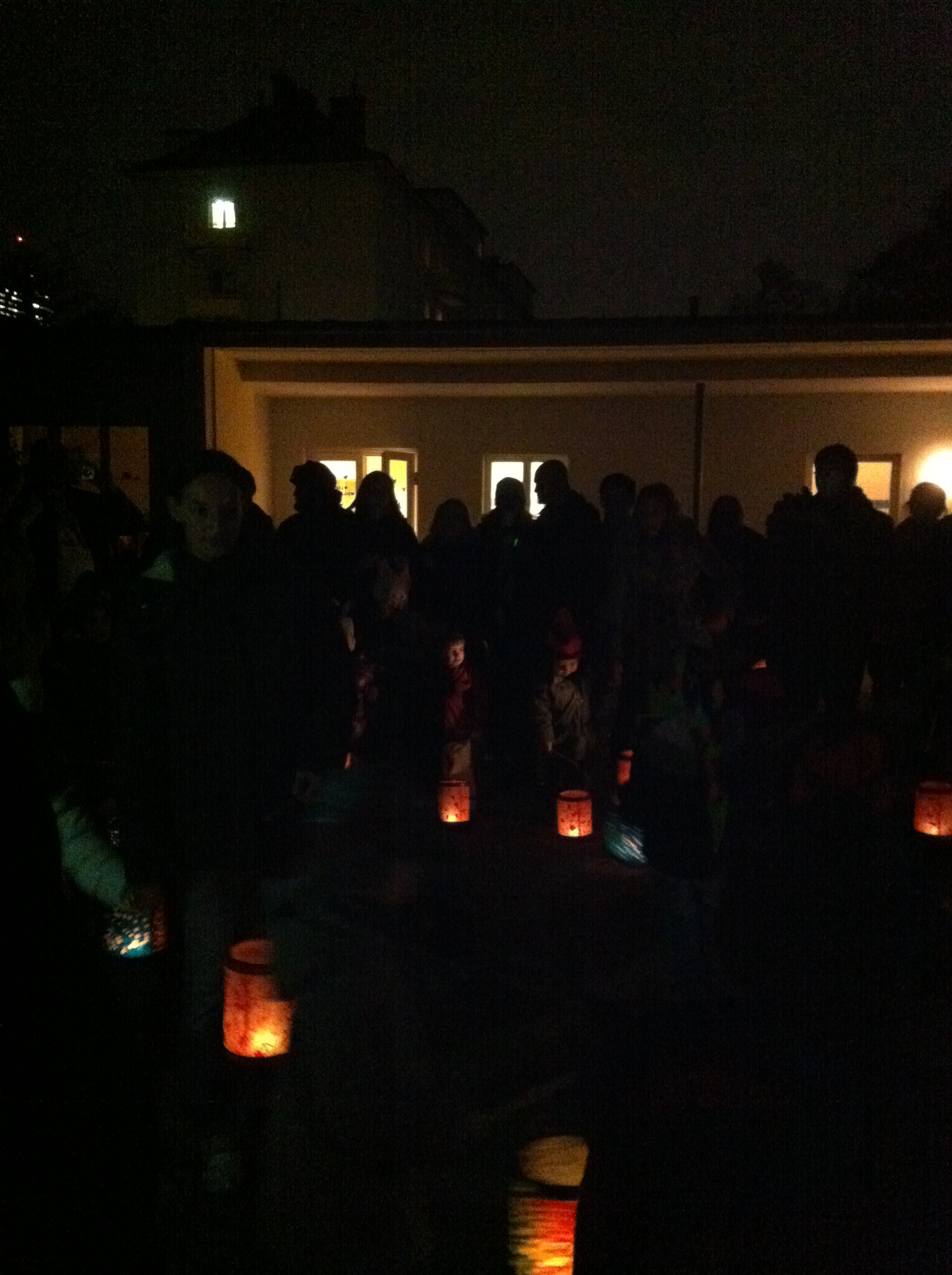 The teachers had made paper lanterns for each child (complete with real, actual candles!) and each of the kids had helped to make his or her own costume.  They all lined up and then got arranged in a circle, and began to sing.  There were three songs, none of which I understood, but each of the kids had a part to play in the performance, which mainly involed the kids taking turns walking around in a circle and the teachers doing most of the singing.

It was great.  Benjamin was a cat (the cutest cat EVER, for the record) and was part of the first group to perform in the first song.  He did great during “his” song, but when the props came out for the second song, he burst into tears and cried for me, so I ran around the circle to hold him for the last two songs.  (Turns out, in the dark, he hadn’t been able to see me and was “worried about me”.)  Liam wanted nothing to do with the singing and spent the entire performance toddling around the playground with Dan in tow (on the plus side, as long as he was wandering, he was relatively quiet). 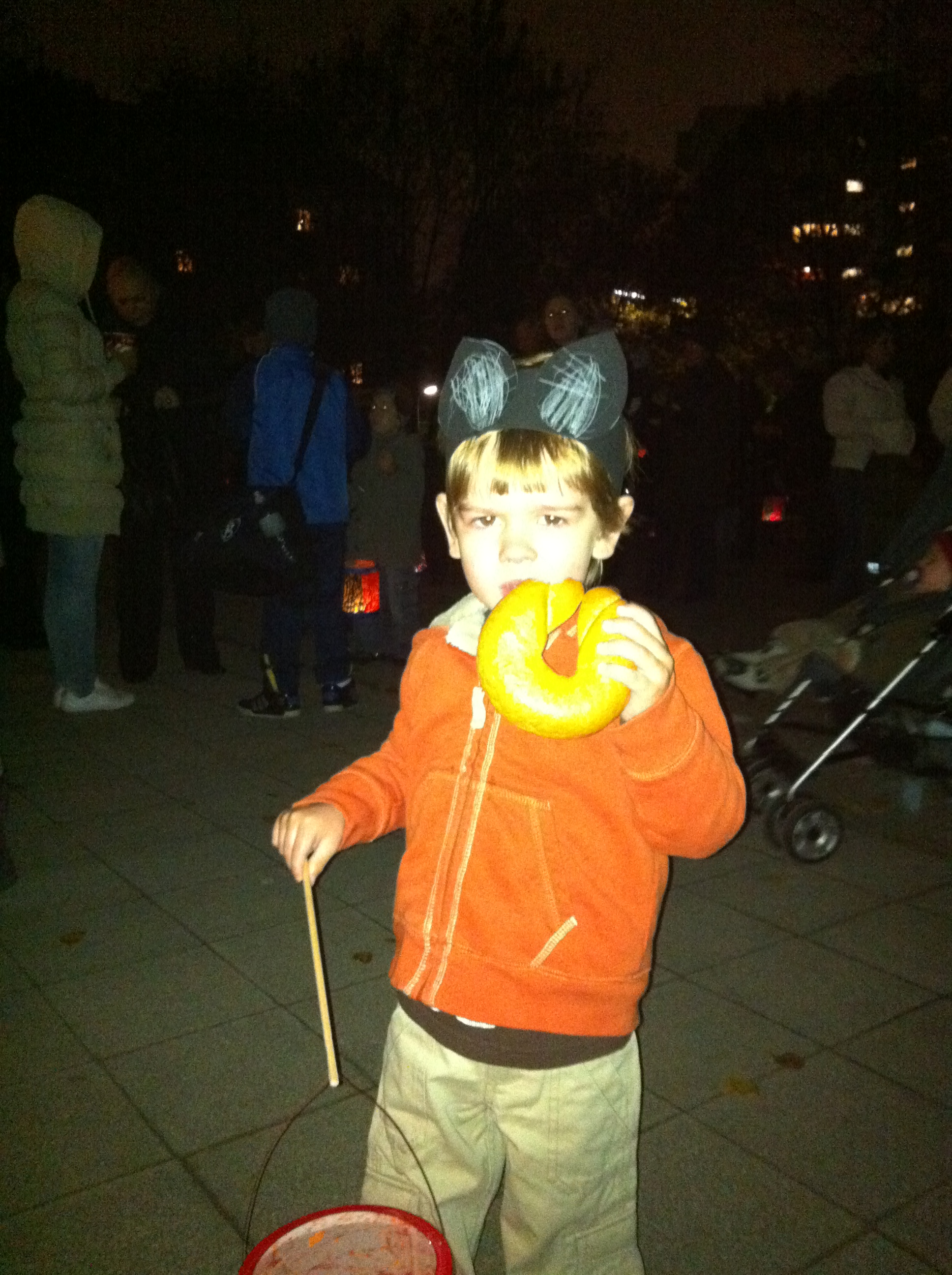 I’m so proud of my little guy.  I know it’s a “mom thing” to be proud of our kids, whatever the situation, and there’s definitely that aspect to what I’m feeling, but I’m also truly impressed by him.  I know plenty of adults who would balk at participating in a performance where the entire show (and much of the direction) was in a foreign language.  Until relatively recently, he wasn’t too thrilled about school at all, so to see him out there, participating in his class activity, and enjoying it (at least the first part) was really amazing.

After the show, the kids all got to run around the garden in the dark and play, which was a lot of fun for them — Benjamin particularly seemed to enjoy getting to show us all around his school play yard.

(This evening also brought back very fond memories, for me, of a tradition called Lantern Bearing which we celebrated at Sweet Briar.) 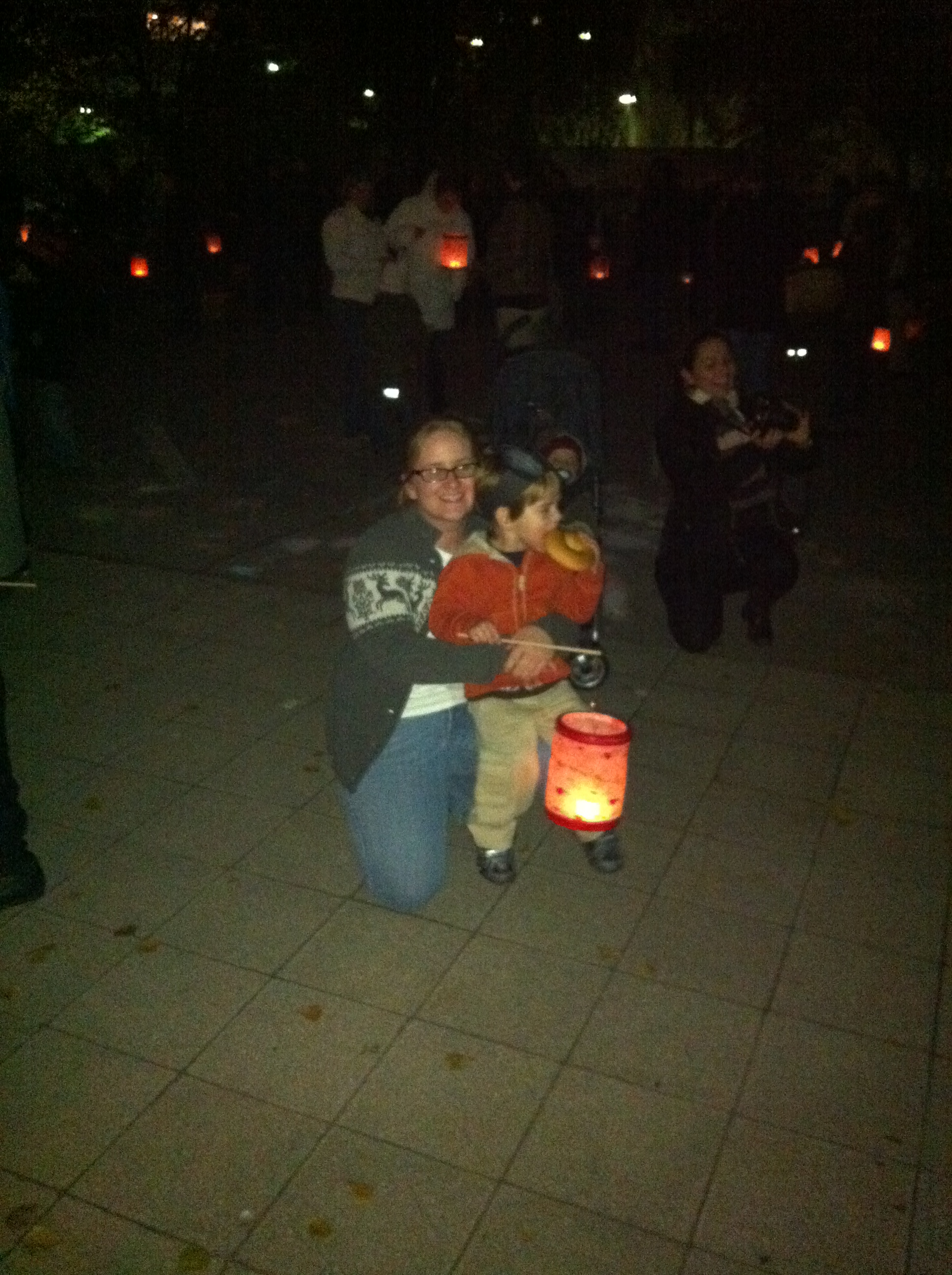 Apparently, these “lantern evenings” happen in schools all around Vienna, across Austria and throughout Europe.  It’s part of the celebration of the Feast of St. Martin (who I had never heard of, apart from the island) which is seen as the first part of the Christmas season, the beginning of a 40 day period of fasting or an excuse to drink wine and eat goose, depending on your view.

Benjamin did great, and we all had a great time.  This was another very Austrian experience, in that we don’t (to my knowledge, anyway) particularly celebrate St. Martin’s Day at home, and at the same time, really universal — my pride in watching B, his excitement, and even his tears, are the stuff of preschool performances, wherever they happen. 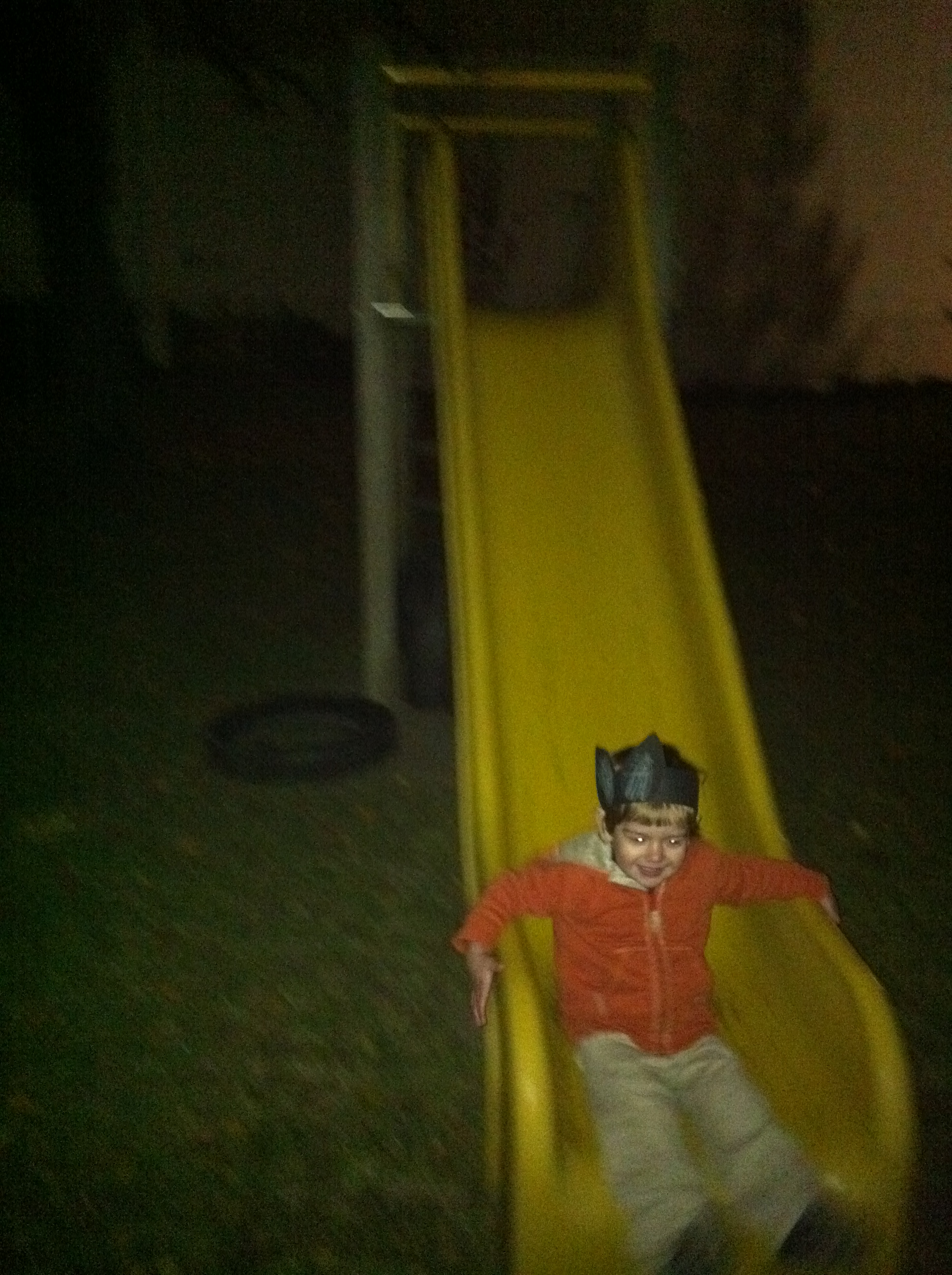 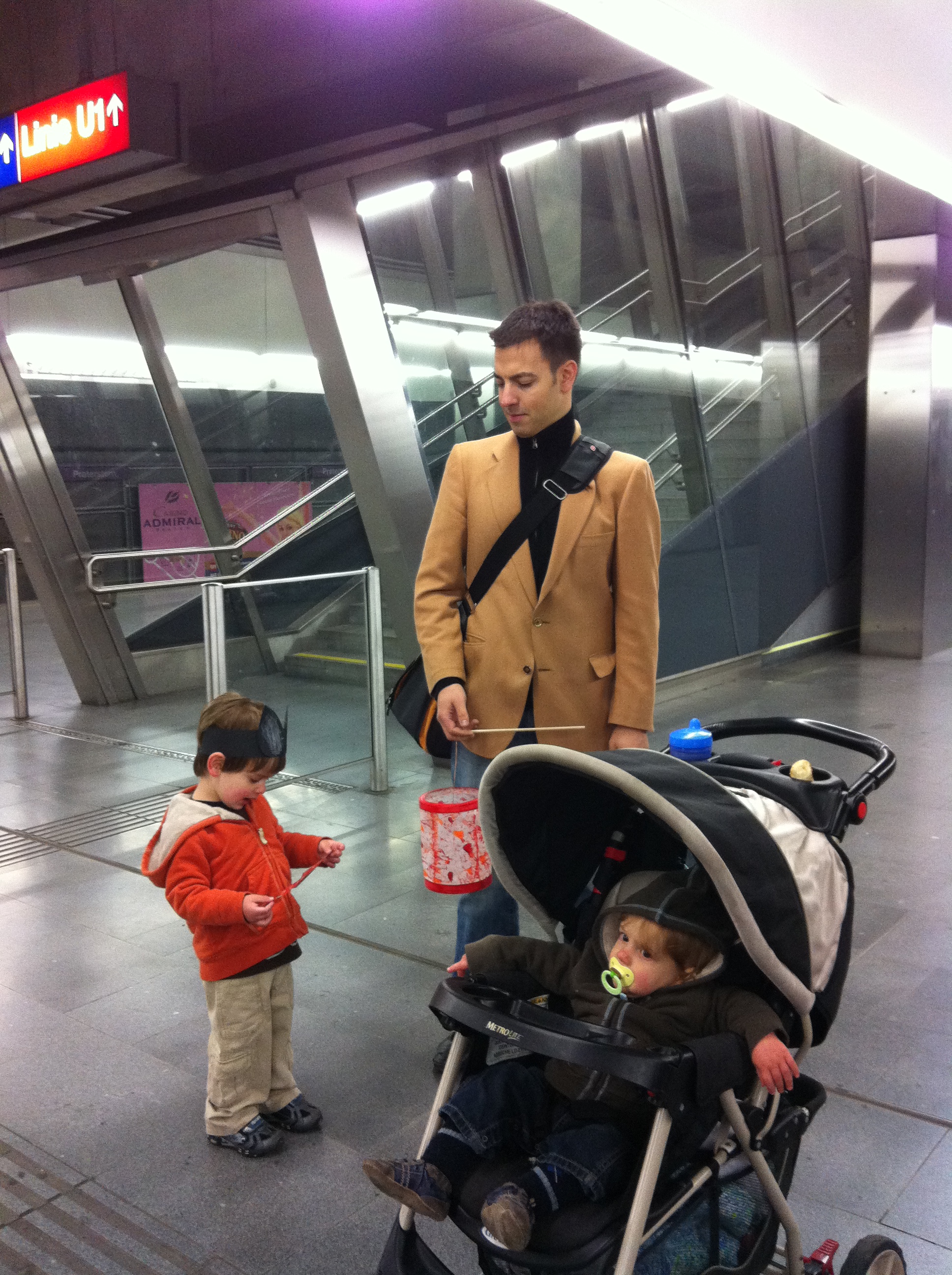