So far, I am loving B’s new school.  He’s only 2 days into the year so far (well, he’s almost done with his third day at this point) but he’s already had gym class, music class, German class and art class, in addition to story time and math instruction (plus chocolate cake at lunch time — twice).  He gets to go outside for recess twice a day, plus they begin and end their day with “structured free play”, which means that they get to choose which of several stations around the classroom (art, Legos, doll house, a shop, reading) they’d like to play with, and then they get to play quietly and cooperatively with their classmates.  His teacher seems very kind and patient, too. 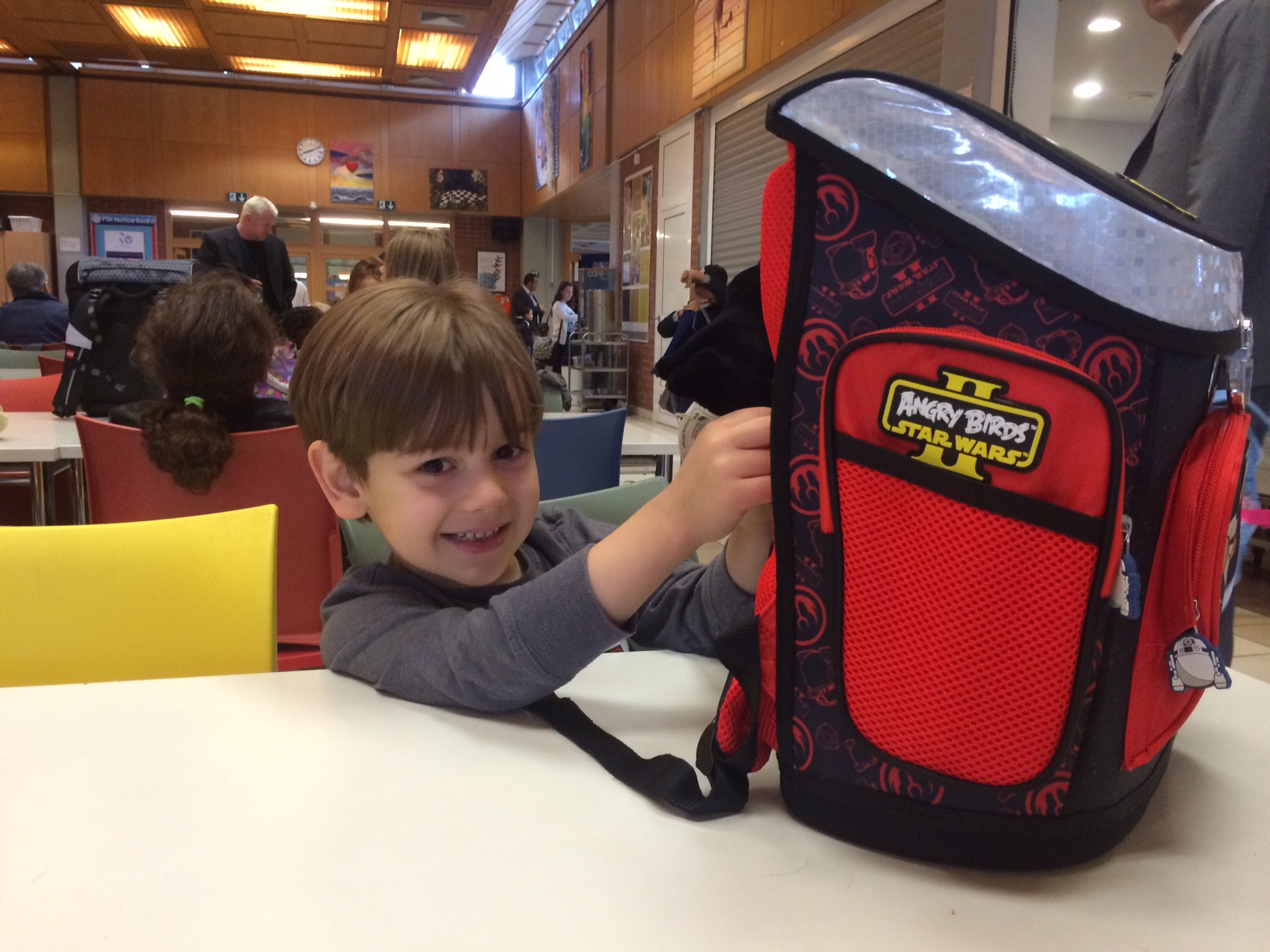 I think it’s kind of the Shangri-La of first grade.

Yesterday, for art class, each child painted the flag from their home country.  B came home and reported that he was jealous of the Japanese kids in his class (there are 2) because their flag “is just a big red dot!”  He also acknowledged that the Russian and Austrian kids had it pretty easy, too.  According to B, only one kid had it “worse” than he did.  He insisted they were from a South American country whose name he couldn’t remember.  We tried to figure it out, but we were stuck.  He explained that their flag was just like his, only it had a yellow moon instead of the white stars (which is why it was harder — because he got to leave the stars blank, while the moon had to be colored in).  We finally figured out that he was talking about Malaysia … he was certain it was South American because “the flag looked so much like mine that it must be SOME kind of America!”  We had fun at dinner last night piecing together the home countries of the kids in his class based on his descriptions of their flags. Once again, he appears the only American in his class, and I just can’t help but think what an amazing experience this will be for him — his classroom is like a tiny little United Nations, all by itself!

Living in Vienna is my first experience of living in any kind of big city.  When we lived in Virginia in the US, we lived in a very busy and crowded suburb, but it wasn’t the same as living in an actual city.  In a lot of ways, I think that particular suburb had a lot of the worst characteristics of city life (traffic, tons of people, noise, expensive housing) with very few of the redeeming qualities (walkability, sense of neighborhood, culture on your doorstep).

I have, however, both where I grew up and then living in Virginia as an adult, been fortunate to live in very culturally diverse places.  Living near Washington, DC does that — with so many people from international diplomatic services, as well as DC being the heart of the American government, there is an environment of cultural and ethnic diversity from around the world and throughout the US itself that’s pretty impressive.  Vienna has much the same situation — home to a main office of the UN, there is, by requirement, a vast international community, and, since we live in the very heart of the city, we get to experience the international feeling of a major city that is then amplified by the UN’s existence here.

As such, my kids are growing up in a very international environment.  Benjamin’s kindergarten class has kids from at least 5 different countries and Liam’s class has at least 6 nations represented — and each class only has 20 kids.

But school isn’t the only place we see this dynamic.  Living in Vienna’s 1st district (the central and oldest part of the city) we encounter this international feeling all the time.  It’s entirely common to take a trip to the playground and meet children from all over the world.  On one particularly frustrating occasion, B tried repeatedly, in increasingly slow and precise German, to ask another child their name and age.  He finally came to me in exasperation, asking why he wasn’t being understood, and after inquiring, it turned out that the child was Russian and spoke no German.  (And since we speak no Russian, they were able to play together, but not talk much.)  Another time, my two boys befriended two boys of similar age, finally settling on French as their most common language (in which Benjamin can only say “Bonjour” and “Je m’appelle Benjamin” … but it worked).

This weekend, I looked around the playground and realized that there were four families and four different languages and nationalities represented — American, Spanish, Russian and Austrian.  This is perfectly normal at our local playground.  We’re almost never the only “imported” family there.  Watching my kids play with and around other children from all over the world makes me appreciate that of all the international cities we could have ended up in, Vienna is one of the best.  My kids are used to hearing other languages all the time, they have the experience of finding a common language and sharing common interests with kids from all over the world.  Plus, it’s so much easier to be “foreign” and “different” when you aren’t the only one.  I love the international feeling in Vienna, and the variety of kids my boys are exposed to.  Every trip to the playground is like our own little kindergarten Olympics.

Living abroad, I thought I’d be a lot more embarrassed about being American (and more reluctant to admit it).  It turns out that (to my face, anyway) I haven’t encountered a lot of anti-American sentiment.  People are much more likely to react with interest, rather than derision, when they hear where I’m from.  (So far, the only people I’ve met who make me embarrassed to admit that I’m American are other Americans who are behaving badly — but that is the exception, rather than the rule, as well.)

At home, we’re all from someplace else.  As you are getting to know someone, it’s very common for them to identify themselves with another country/culture:  Italian, Irish, French, Puerto Rican, Indian, Chinese, etc., etc., etc.  Even people born in the US — even people whose parents and grandparents were born in the US — will identify themselves by their country/countries of heritage.  People have a lot of pride about where their family is from.  I’ve heard (and been involved in) arguments about how much of your family has to be from somewhere for it to “count”, and heard cultural/nationalistic stereotyping used both negatively and inclusively.  It’s part of the “mixing pot” mentality, I suppose — since we’re all from somewhere else, we find and share our common bonds.  There’s strength and tradition in identifying with our culture of origin, but it also creates divisions and can create discord and dislike.

At home, I’m Irish.  (Well, mostly.  More or less.  More than anything else.)  Dan is Colombian (that’s legit, though, as he was born there — but his family likes to point out that they’re really Spanish, by way of Colombia).  Our kids are Colombian/Irish/???.

When we first arrived here, we’d find ourselves equivocating, the way people do at home, about where we’re “from”.  Living in Austria, that just confuses people.  If you say you’re Irish, they expect you to have an Irish passport, to have been born there . . . or at least to have BEEN there sometime in your life.

Here, we’re just American — no further explanation required.  I find it ironic that I didn’t really identify myself that way until I left.