So far, so good:  I made it to the arrival of my guests without having my head explode.  Success!  (Although, the last minute getting together of stuff and random cleaning did almost send me over the edge.)

Dan’s parents arrived safe and sound (and without getting lost) right at the end of nap time today.  We hung out here for the afternoon, and went to dinner.  Benjamin is having an awesome time playing with them, and Liam is loving all of the attention and activity, as well. 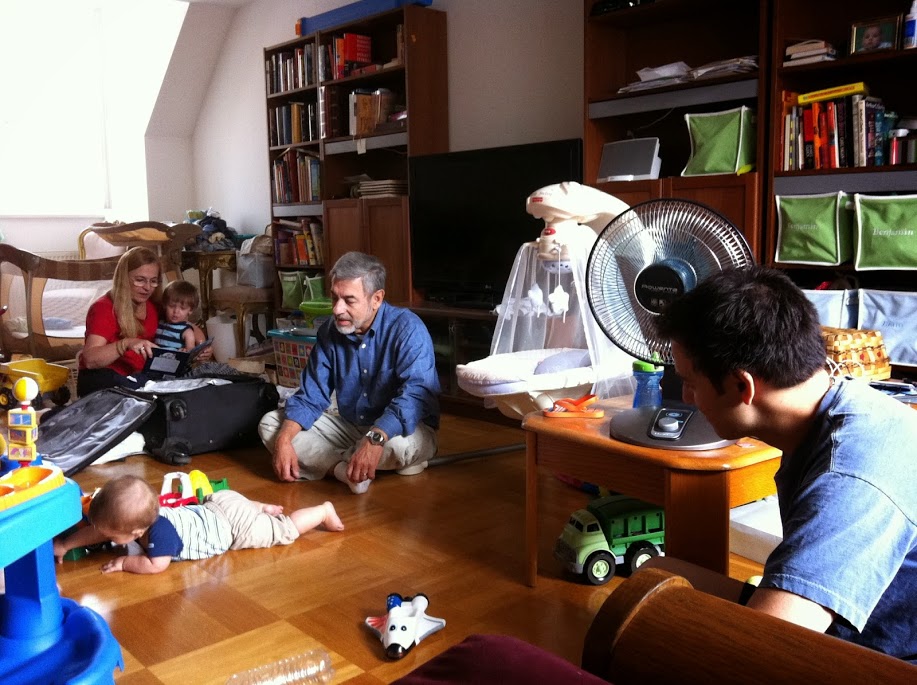 In addition to enjoying having them, we’re really looking forward to getting to be the relative experts for a few days — after nearly 3 months of always being the least informed person in a conversation, it’s an exciting prospect to be the ones who know what’s going on, where things are, and even a little of the local language.  (I’m kind of used to being a smarty pants, and I’ve grown unaccustomed to that feeling.)  We already experienced a little of this at dinner tonight:  it’s inevitable, because we live here, that we’d know where to go and what was good on the menu (which would be true anytime anyone visited in a new city) but we got to add to that knowing a little German (at least enough to order and ask for the check).

We have sightseeing plans for the weekend, as well as normal errand running (we still have things that have to get done, after all).  I’m looking forward to getting to revisit some of our favorite locations around Vienna.  And, I won’t lie, it’s going to be fun to show off a little of what we’ve learned and figured out.

Dan’s parents will arrive tomorrow — they’ll be our first guests since we moved here.  We’re all very excited to be able to show them around the fun stuff we’ve found in Vienna, and Benjamin is absolutely thrilled that his “Topes” are coming to see him.  We are very happy that they’re coming.

I’ve been busy over the past week or so preparing to have them visit:  we still have lots of unpacked boxes (which is not going to be completely addressed by the time of their arrival), cleaning the house as best we can (the moutons are putting up a good fight) and rearranging things so that everyone will have a place to sleep that is relatively comfortable.

All enthusiasm aside, I’m a little stressed out.  I think that a minimum of stress is unavoidable in my situation:  I’m dangerously close to the limit of my capabilities every day, so adding the work required to prepare for guests is asking a lot.  (In addition to that, this relationship is not the easiest or most comfortable one that I have, and that raises the stress levels, too.)  I woke up this morning irritable, with my nails chewed and my back aching — and our guests have yet to arrive.

We’ll see how things go.  We are excited to have them visit, and I am doing everything I can to prepare things to be as nice and hospitable as possible while still maintaining my sanity.