We’ve tried out a heurigen (a Viennese wine tavern) before.  We’ve been intrigued by the idea since we first saw the concept recommended on the Rick Steves episode about Vienna — in theory, they’re small restaurants (often buffet style) attached to micro-vineyards located within the city of Vienna.  They are only allowed to sell the wine that is produced by the vineyard associated with the heurigen (again, in theory — I’ve read that this is usually, but not always, the case, although that is part of the historical context for them).  The originally developed as a way for the vintners to showcase their wines, the young wines in particular (which is a Viennese thing), without paying tax on the sales.  Generally, the wines are good, and the food is ok, but the setting can be beautiful — a cozy outdoor courtyard with live music, a set of picnic benches with a great view, a warm dining room with candles and a lot of ambiance.  (There’s a lot of variation, of course, but this is the general idea.)  They’re very popular with both tourists and locals — last time we went to a more touristy one, this time we wanted to try one that catered to locals. 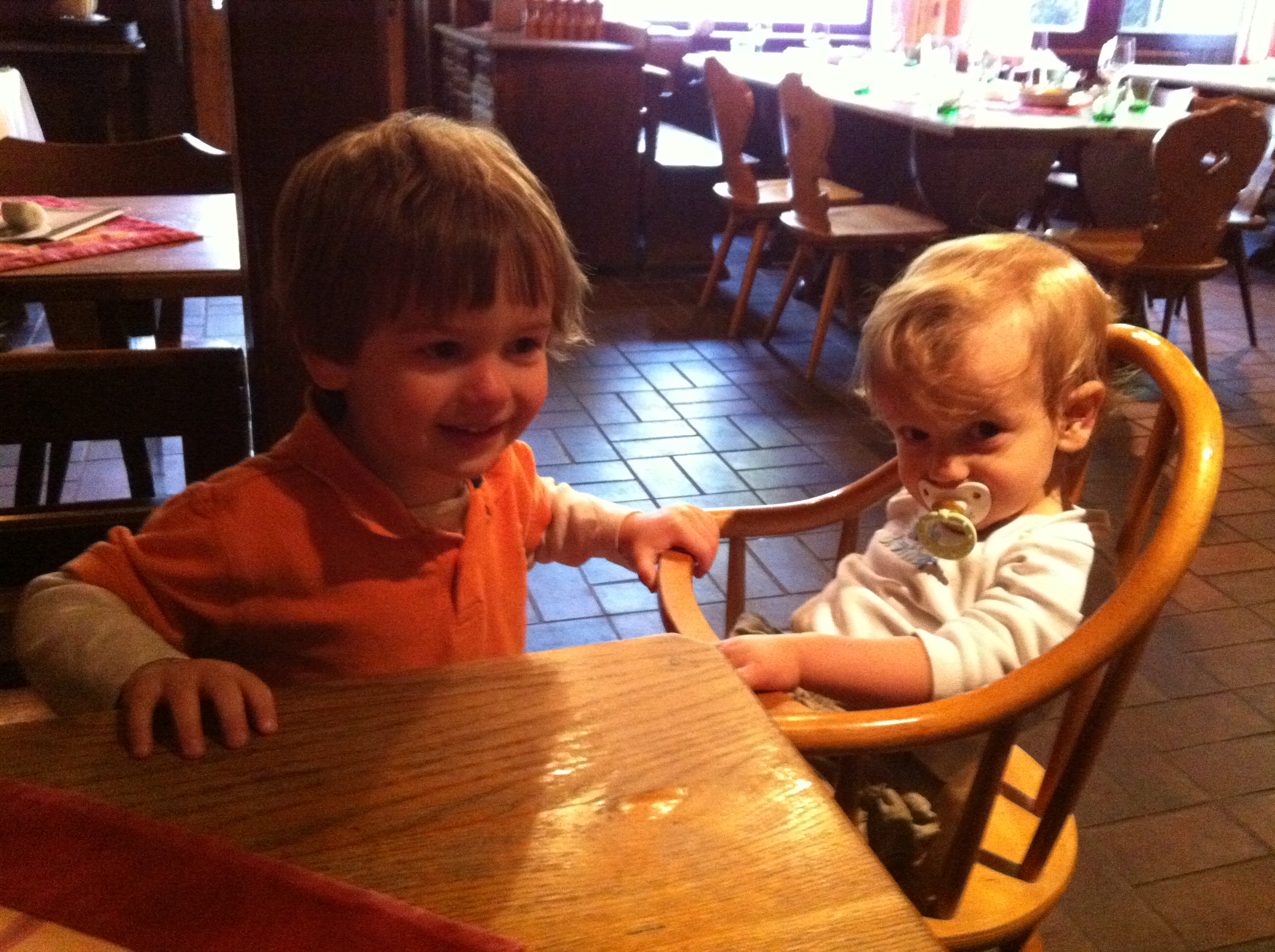 We met our friend, Krishana, for lunch today at Heuriger Wieninger, a heurigen I had read good things about, in the 21st district.  It was a long Strassenbahn ride for us (nearly an hour) but we found success.  It definitely catered more to locals than tourists — no one spoke English to us the entire time we were there (I don’t doubt that they could have, but it’s a sign of how far outside of the tourist track we were that they didn’t snap into English, even when we struggled a little).  The food was quite good.  The wine was amazing (I had an Orange Cinnamon Prosecco).  Benjamin and Liam both enjoyed the food (no wine for them) and running around in the pretty courtyard. 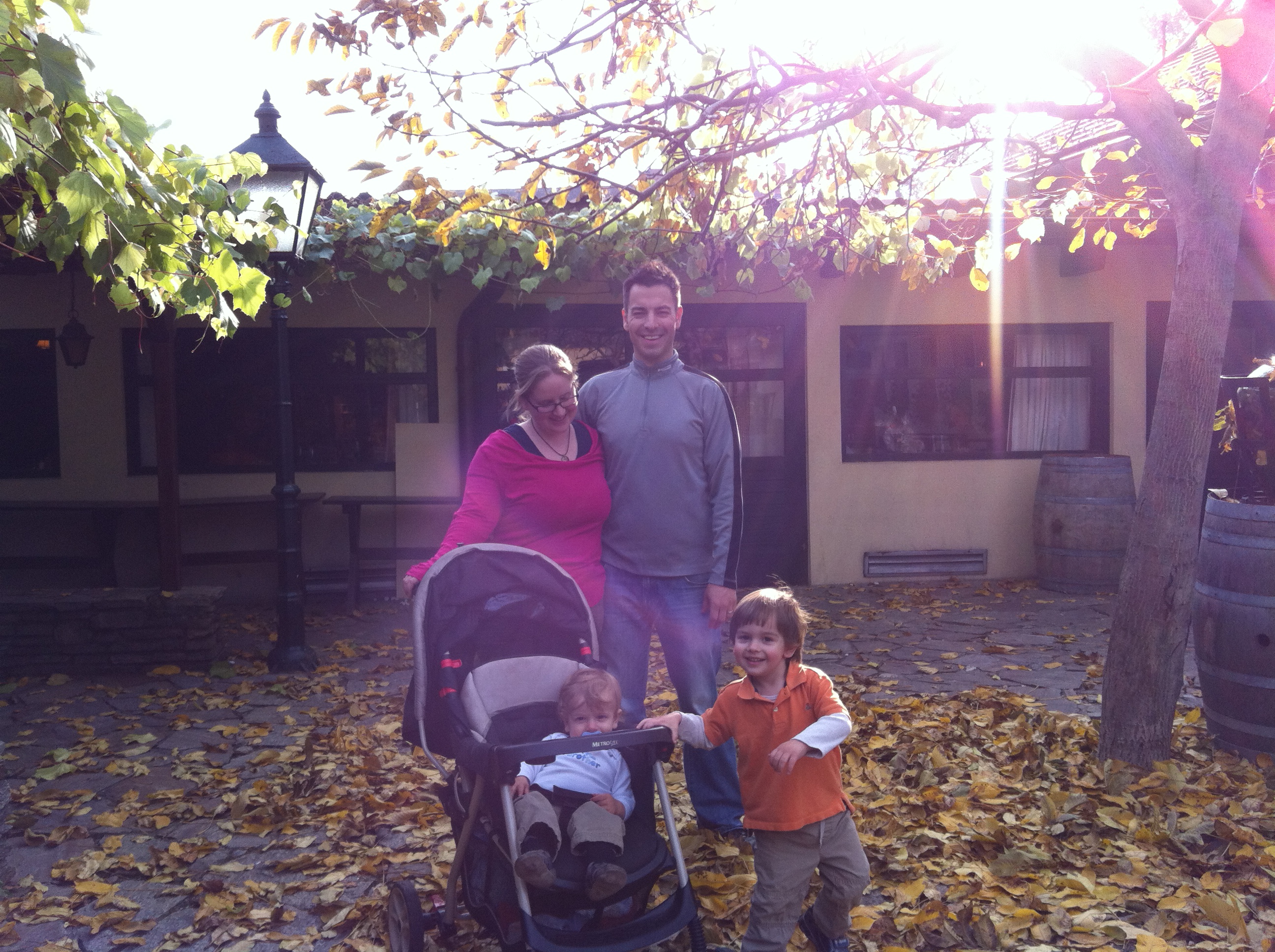 I love the idea of the heurigen, and so far, we’ve enjoyed all of our visits.  I really had fun being a bit further off of the beaten path this time.  Every time I explore a piece of Vienna that I wouldn’t have seen if I’d just been here for vacation, I feel more at home here, more connected to this place.  My next project — a heurigen with a great view.  I’ve heard there are some which are really remarkable, so that’ll be next.

I’ve wanted to go to a Heurigen since before we got here, and today we went.  They are Viennese wine taverns, which were, historically, run by vineyards to sell their new wine.  Now, they seem to have evolved as restaurants that sell “microbrew” wines, locally cultivated (many even within Vienna itself).  We first learned about it while watching the Rick Steves episode on Vienna (which we watched several times as our “homework” before moving here) and it seemed like it would be a very Viennese experience, so I’ve wanted to go ever since. 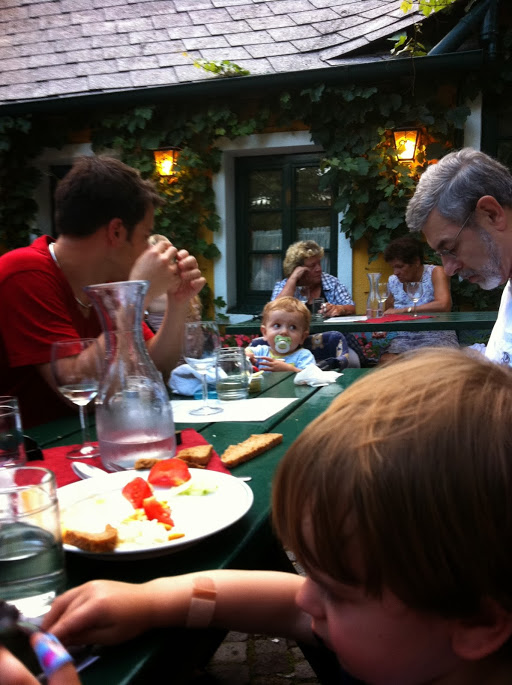 We went this evening.  It was fun — we had some of the “new” wine (from last fall) which they say is an acquired taste, but for those who like sweet, white wine and who know absolutely nothing about what they’re drinking, it was pretty good.  The food was simple and served buffet style (which was fun, because you get to try a little of everything).  We ate outside in the wine garden, which was lovely (if a little hot today) — there was live music and pretty landscaping (including a fountain, which Benjamin loved).  It started raining just as we were packing up to leave, and the rain followed us all the way home.

I do think it’s a fairly unique experience to Vienna, and I’m really glad we went.  I would like to go again.  The one we went to was effectively chosen at random (we had a recommendation from a friend, but we ended up finding a different one by accident) and we really didn’t know what we were doing.  Having been, I would choose a different location, order different things to eat and have a different expectation of the experience.  It was less about the food and drink and more about experiencing Vienna — which is what we’re here for, anyway. 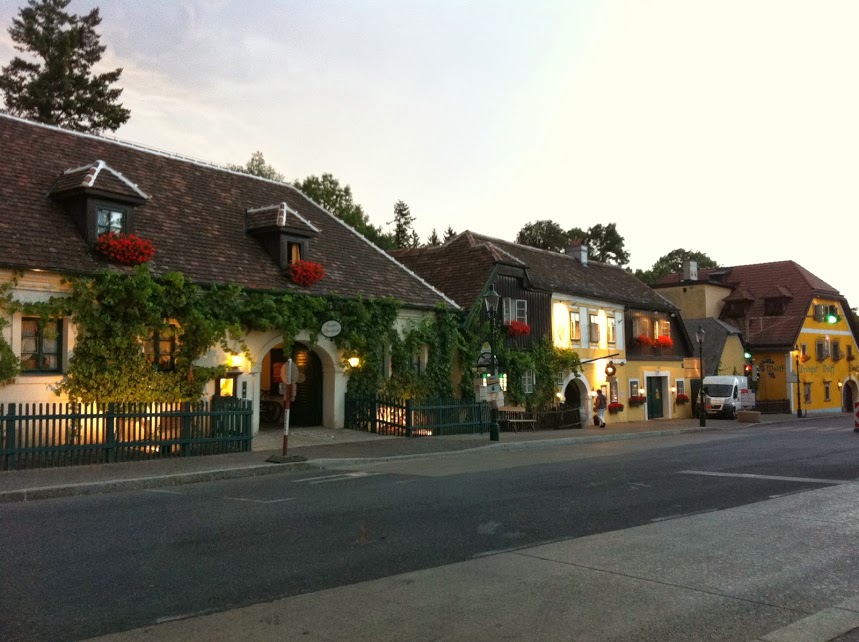