And now another installment in my much overdue recounting of our vacation to the UK last summer . . .

Our first day through Scotland last August was a little insane.  We took a 2-3 hour drive and made it into an 8 hour drive.  We drove through or stopped by at least a half dozen places I’d like to go back and see again.  But we were only just beginning.

My main reason for wanting to come to that particular piece of Scotland, both on this trip and on our previous one (where it didn’t work out) was Harry Potter.  Or, more specifically, the Hogwarts Express.  Harry’s journey to Hogwarts in the movies was mostly filmed along an actual train line in western Scotland.  It’s possible to actually ride a steam train along the route they used for filming, but we knew we’d want to explore along the way, so we drove the (theoretical) hour each way.  (Of course, it took us much longer, and we thoroughly enjoyed it!) 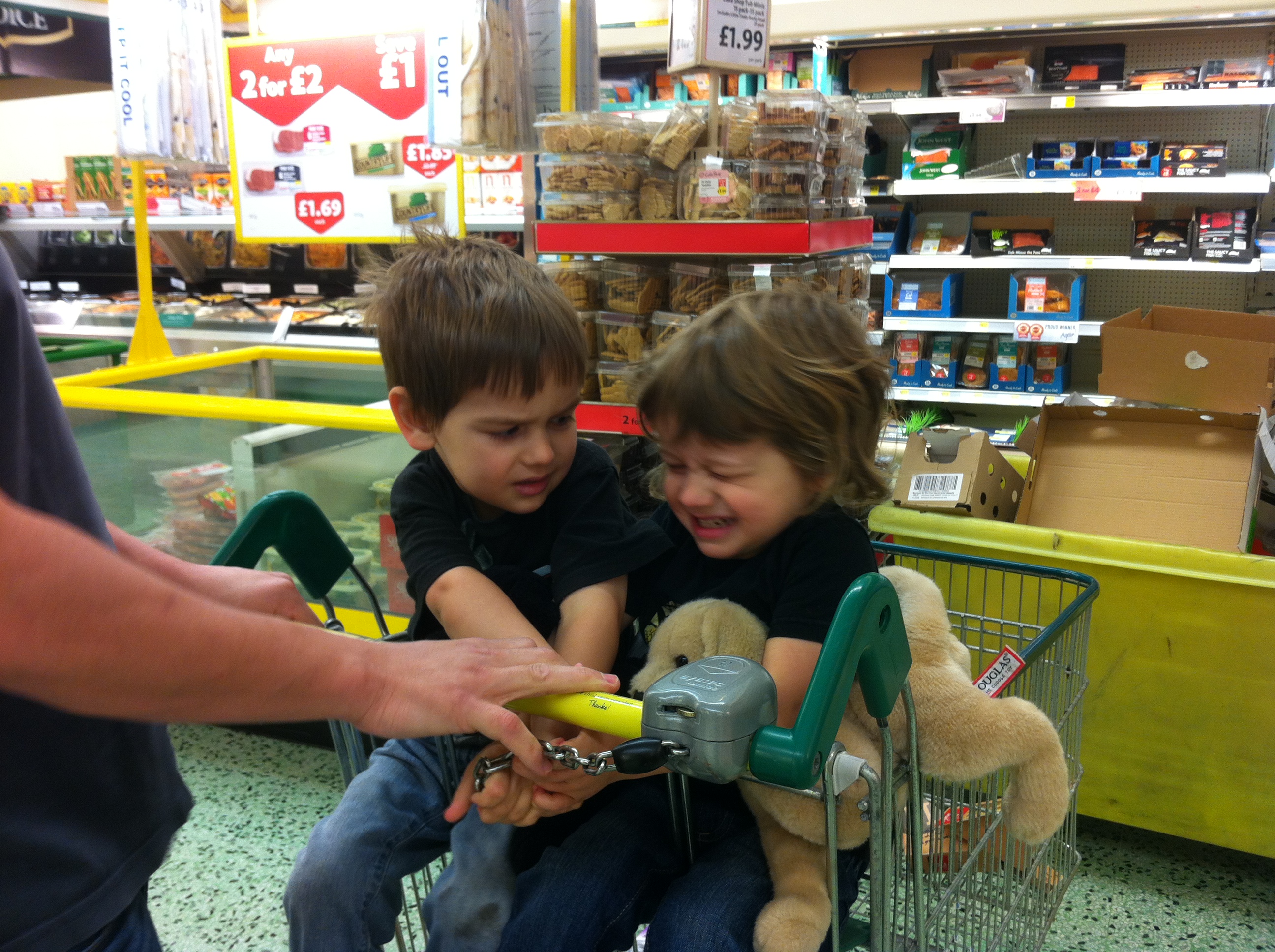 We started our day with a trip to the grocery store to pick out a picnic lunch.  (Wherever in the world we are, grocery shopping is always an adventure.)  Once we had managed that, we got on our way.  From the very beginning of the journey, we’d catch snips of views and vistas that were familiar from the movies, but a lot of the scenery was obscured by trees.  No worries, it was still beautiful.  Our first real stop along the way was one of the most iconic images from the movies — the Glenfinnan Viaduct.  It was pretty cool to stop and see it, and a nice piece of our ongoing collection of visits to Harry Potter places.

We walked around a bit, and the boys really wanted to cross the road to check out the loch across the way.  While Dan and the kids began their explorations, I explored the gift shop.  I’d been looking for something small, kid-friendly and iconic to get them as souvenirs, and I found exactly what I was looking for: the “Wild, Hairy Haggis“.

Most people have heard of the traditional Scottish dish called haggis (which Dan tried on this trip and which I tasted … REALLY not my thing) but the Haggis creature is not as well known (mostly because it’s entirely made up).  They are sweet little stuffed animals with a cute story, so I got one for each of the boys.  It was love at first sight, and our new Haggises were excellent companions for the rest of our trip, immediately befriending Ignis, who was also journeying with us.  (Dragons feel very much at home in Scotland, as it turns out.)

I am so glad that the boys were dying to play at the loch, because it would up being not only one of the most beautiful spots we visited in all of Scotland (which is truly saying something) but also another staple from the Harry Potter movies — this lake, Loch Shiel, across from Glenfinnan Viaduct, is known as the Black Lake at the foot of Hogwarts Castle in the movies.  And it was absolutely stunning.  (I love Scotland.) 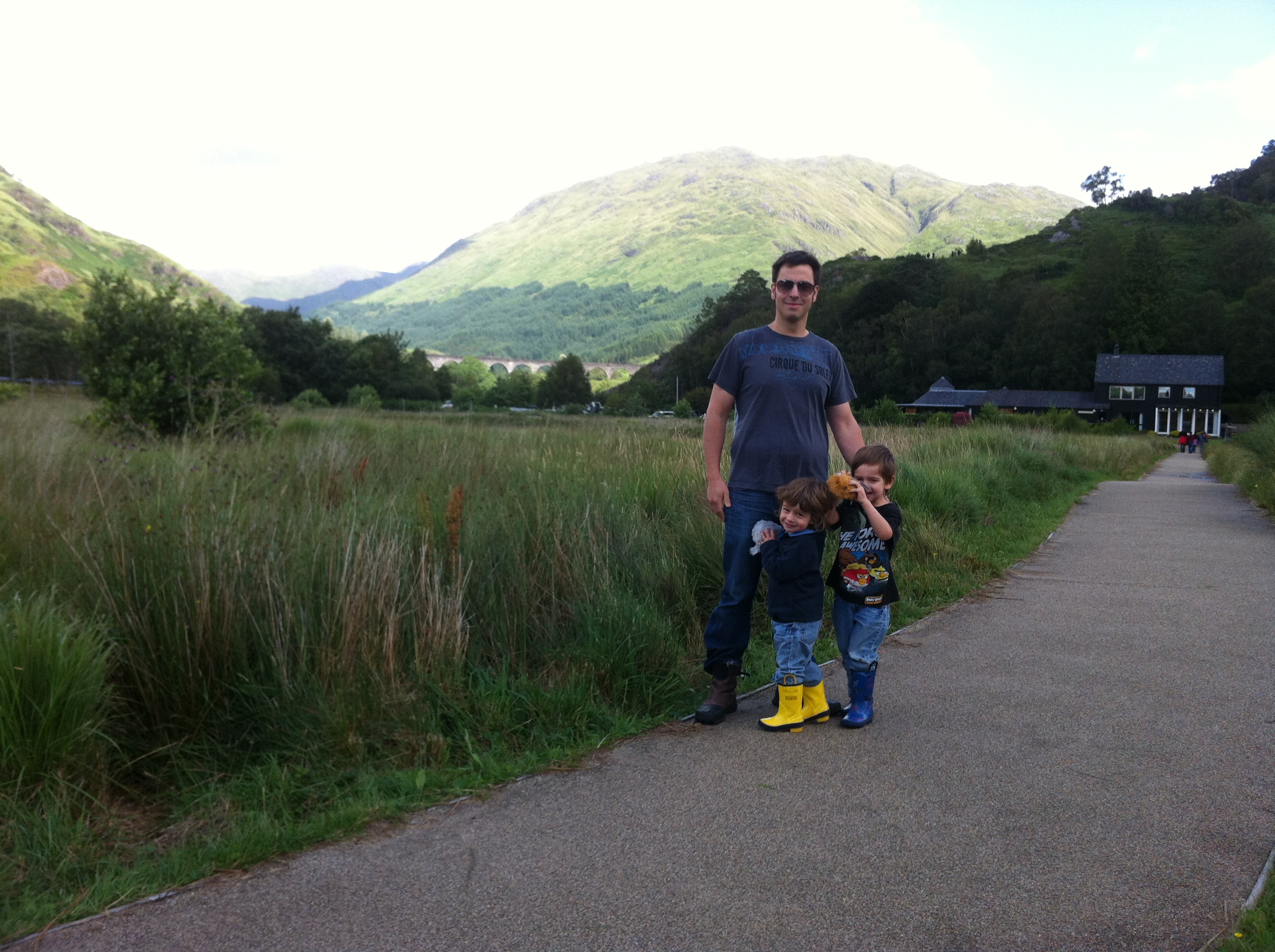 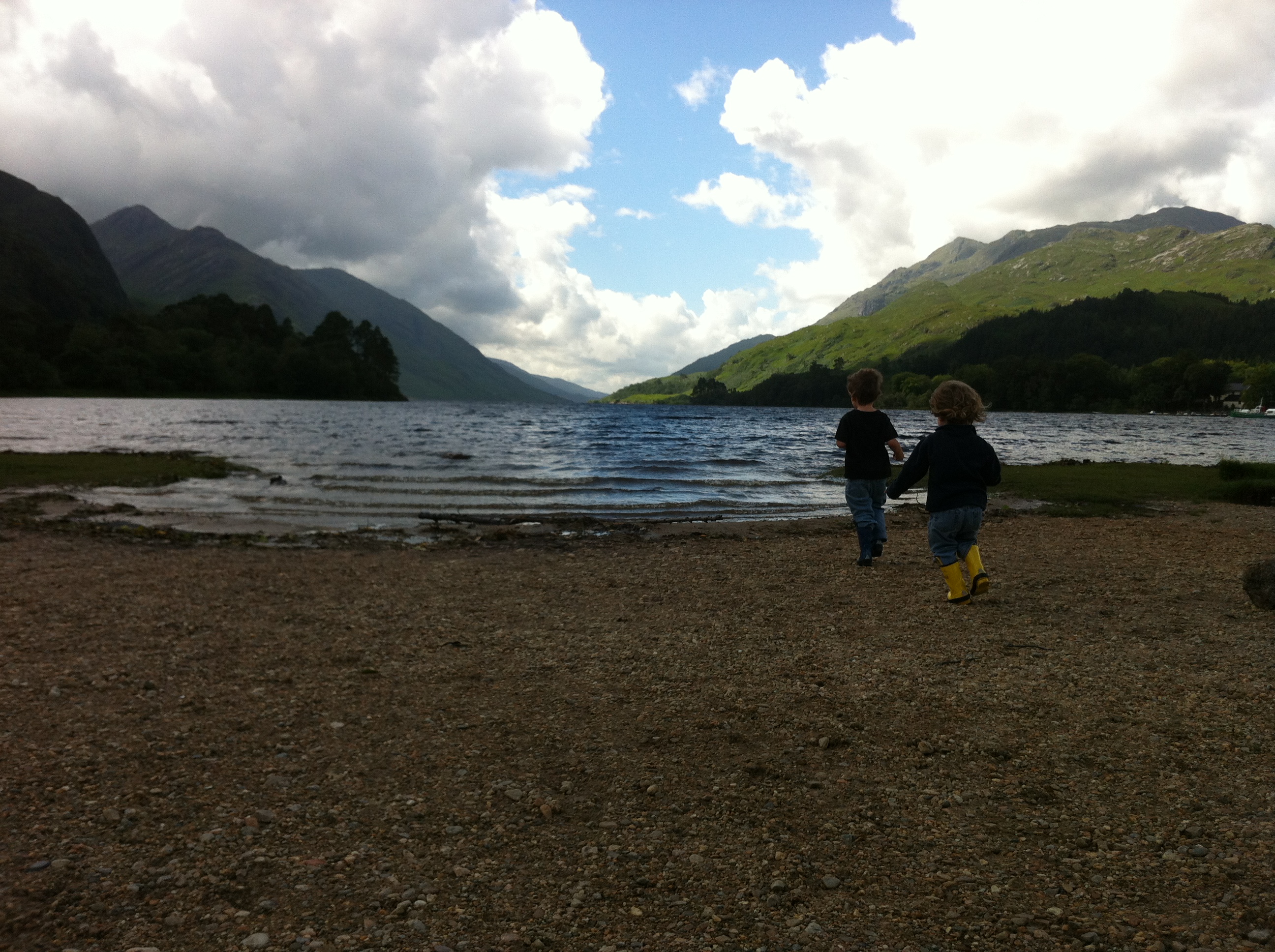 As we trekked on, we again found many places worth stopping for a look.  (Did I mention that I love Scotland?)  And we caught many views of the train line we were following.  The further north we got, the more rugged, and the more coastal, things became.  We eventually started looking for a place to picnic, and found a beach on a river that looked public and promising.  We ate our sandwiches and played in the sand.  B bravely waded into the frigid (even in August) water.  We watched people play with their dogs and saw a big group of kayakers arrive along the beach.  We got a bit chilled and very sandy, but it was a great picnic. 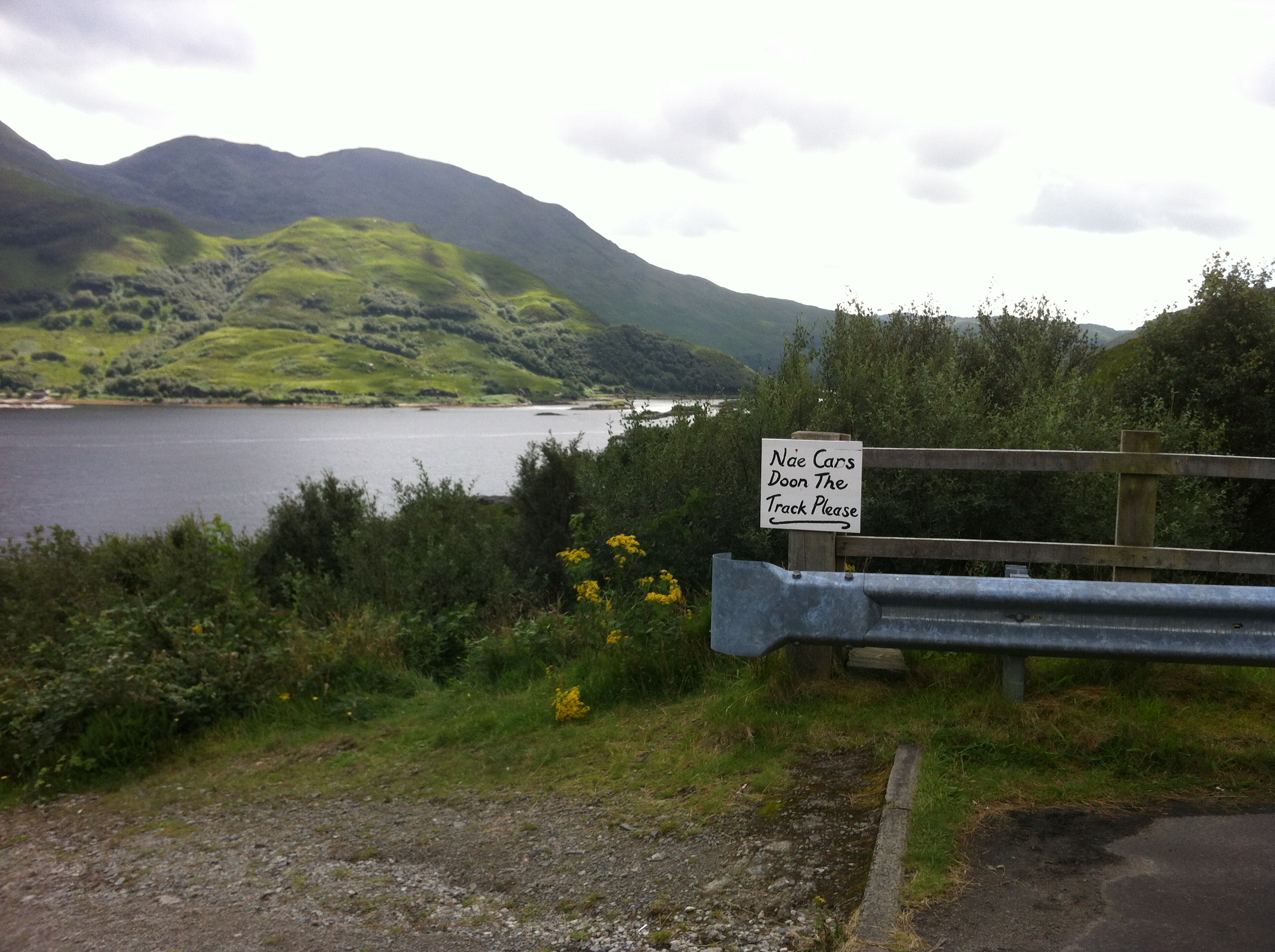 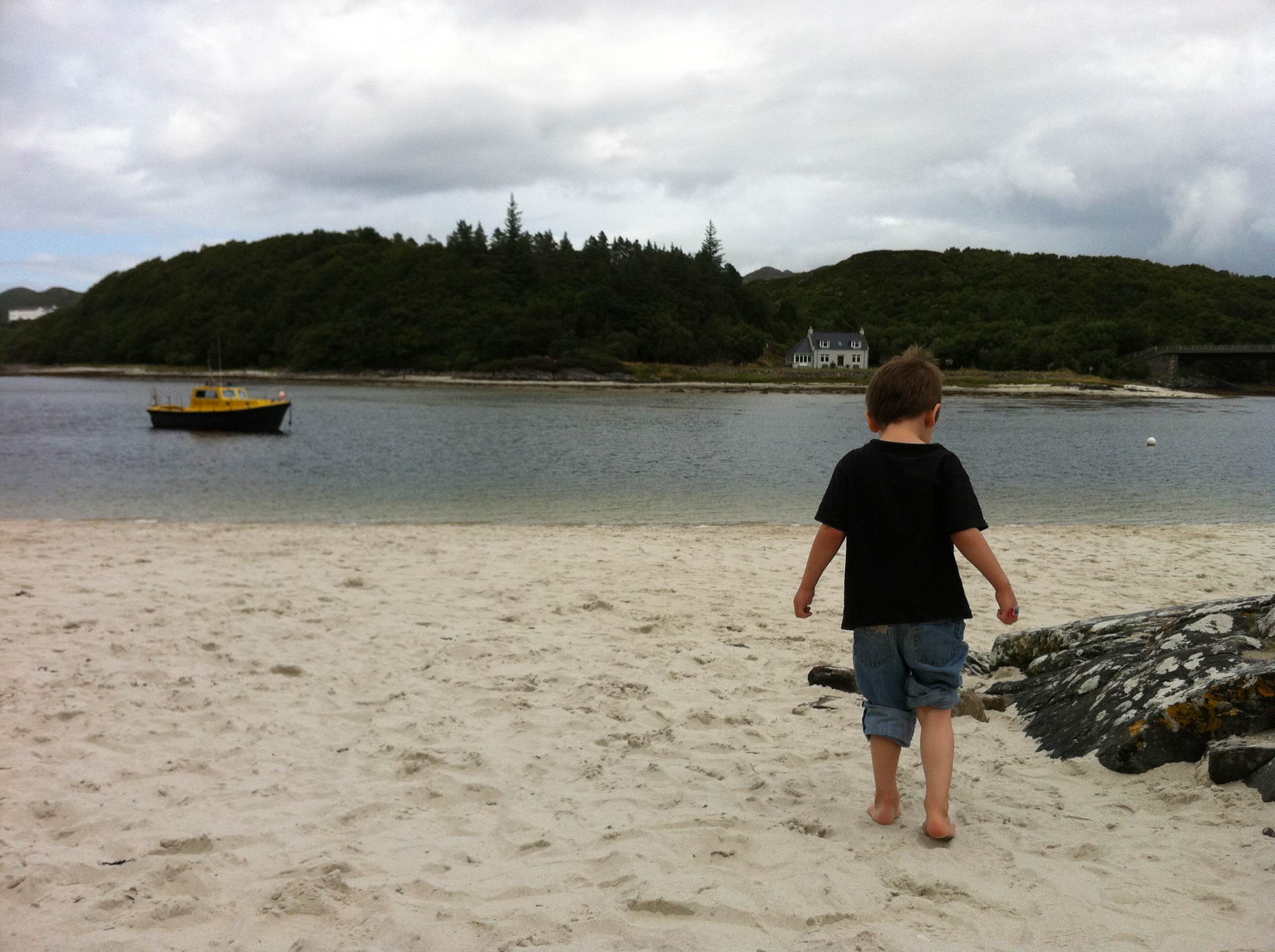 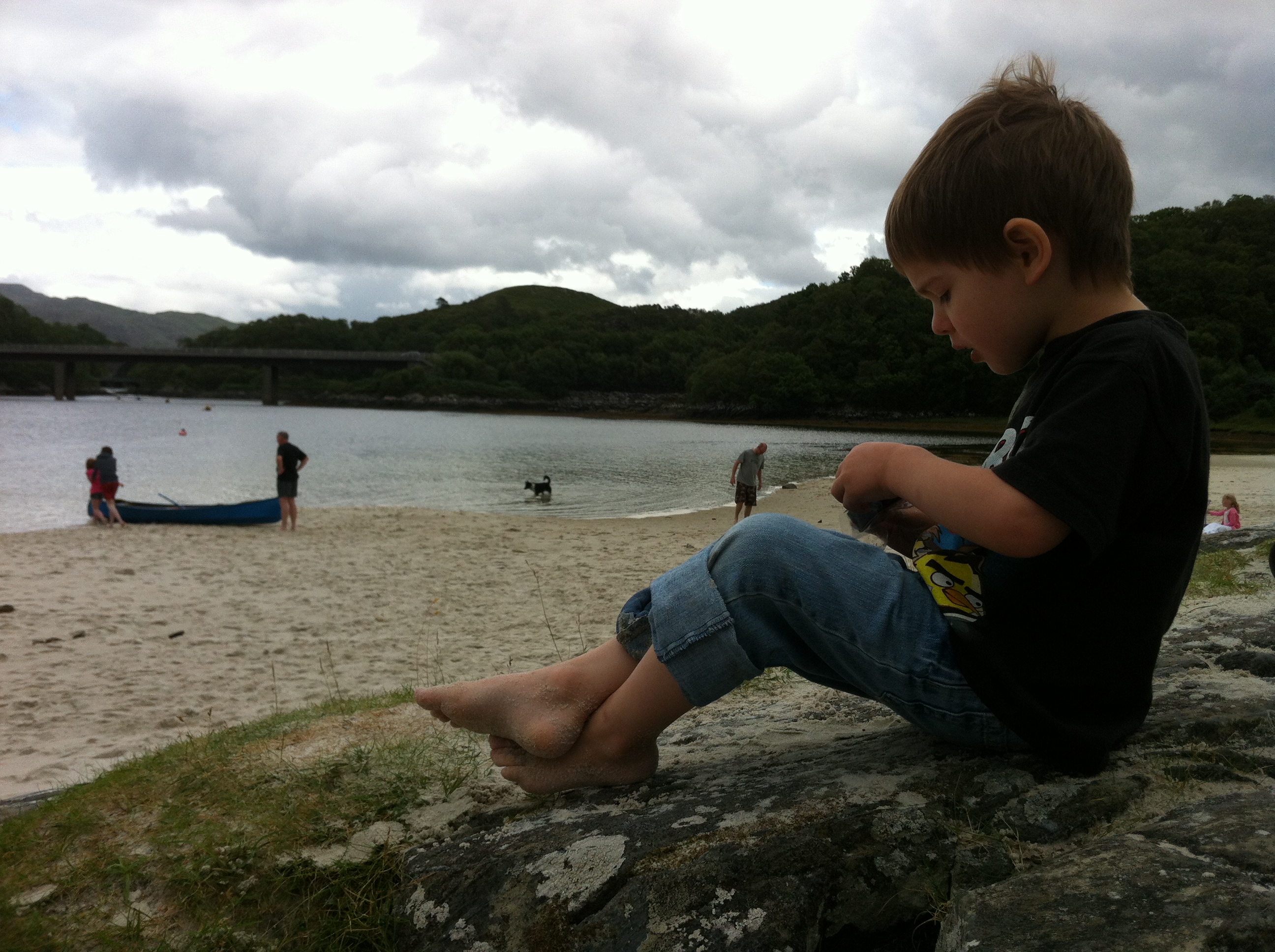 We continued on to our “destination” (pretty much as far as you can go in that direction without catching the ferry to the Isle of Skye, which, incidentally, I wish we’d done) — Mallaig, a tiny fishing town, and the farthest north I’ve ever been in my life.  We stopped for an ice cream and then turned around to repeat the beautiful journey back in the other direction.  It was another amazing, beautiful day in a stunningly gorgeous place.  We chose this place to see where the Hogwarts Express made its trip, but that had almost nothing to do with how much we loved our time there. 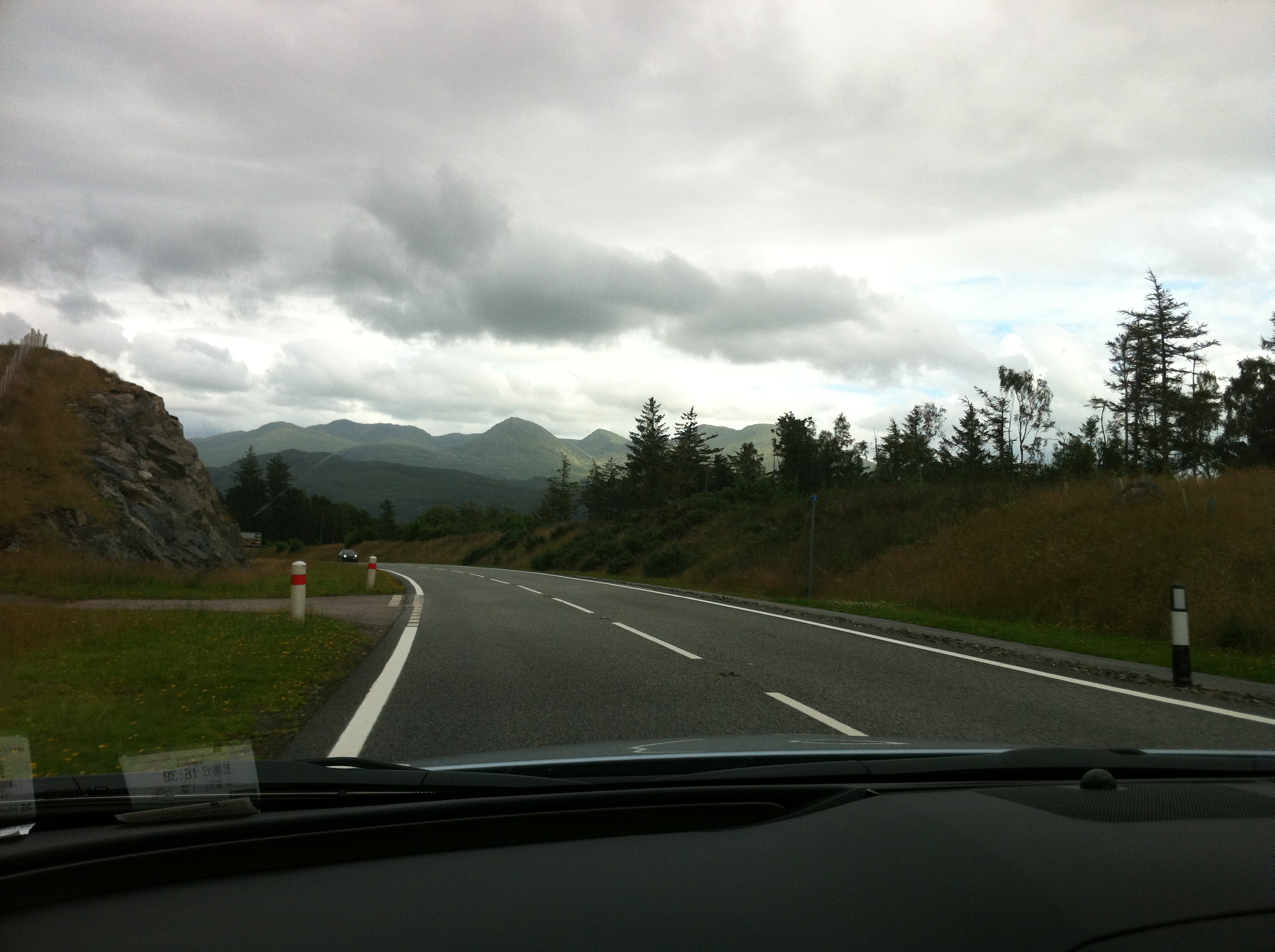 Just in case out first day in London wasn’t touristy (and geeky) enough, we followed it up with a trip out of London to take the Making of Harry Potter tour where they demonstrate, in great detail, a tremendous amount of what went into making the Harry 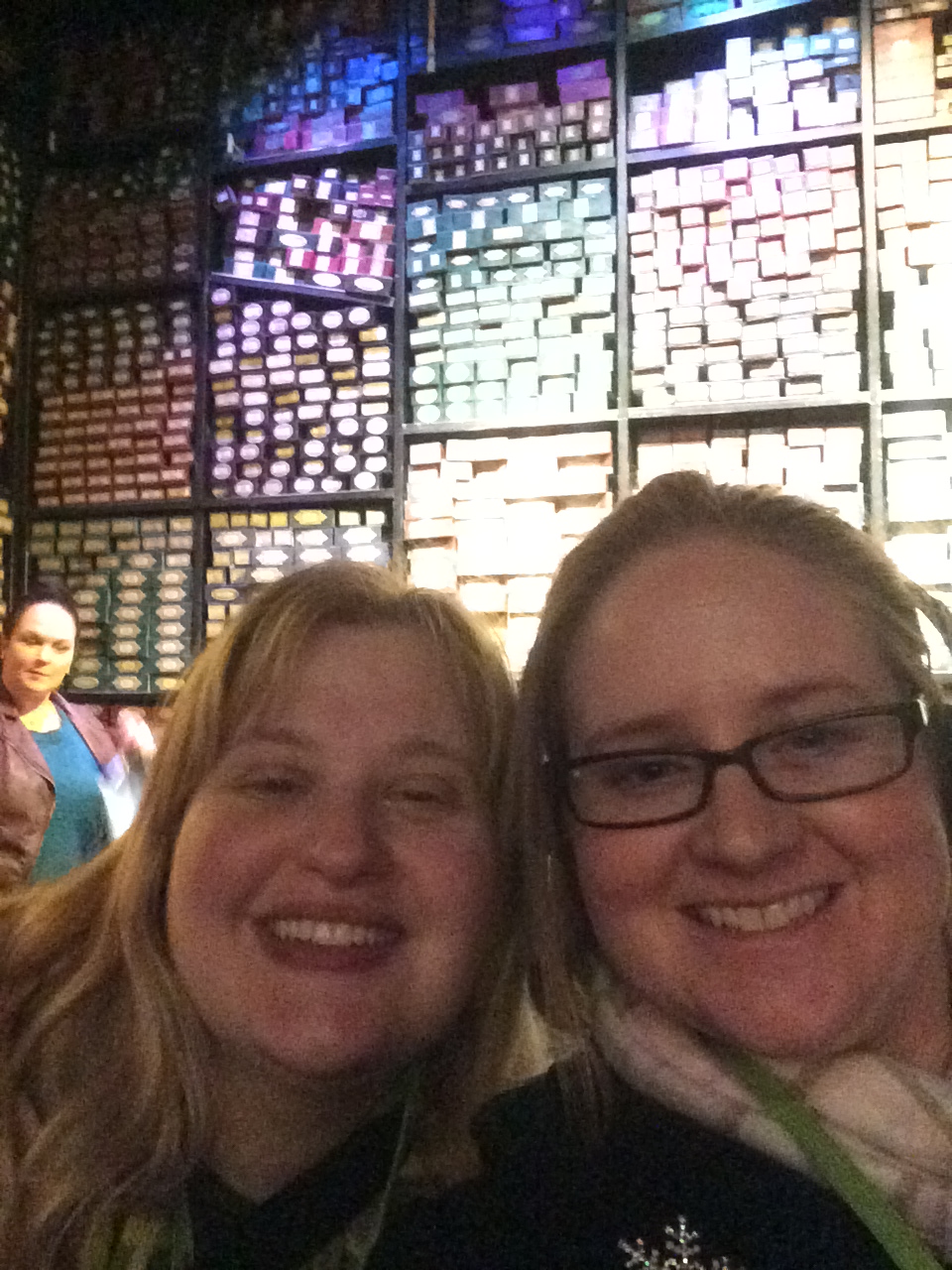 Potter movies.  As huge Harry Potter fans, it was an excellent choice for Pam & I (although I admit I felt a bit sheepish for choosing a movie set tour over the many more significant cultural opportunities London offers . . . but not enough to change our plans).  But, we also did expect to be able to fit in some kind of sightseeing in the evening — although the tour is over an hour outside of London, we planned to be back in town by late afternoon.

When I was planning the trip, I debated the best way to get out to the tour site (at Leavesden) and back.  The train was the economical choice, but would have required 2 Tube lines, a transfer to an overground train and then catching a shuttle bus, and with all of that, ensuring we’d make it out there by our 11:00 tour time.  The direct bus from central London, though much more expensive and equally time consuming, had the attraction of being stress and effort free — all we had to do was show up on time, and someone else would take care of getting us there.  In the end, I opted for the bus, and

after my frustrating experience with the trains between Gatwick Airport and London, I’m glad I did — I think the train would have been fine, but I’d learned we couldn’t necessarily count on it being punctual enough.

The bus was as easy as we’d imagined, and the tour company booked us on a return trip just over 3 hours after the start time of our tour, which confirmed our expectation of being back in London well ahead of evening.

We actually arrived a fair bit before our tour time, so we made the logical first stop — the gift shop — where we went a little crazy.  Very cleverly, the coat check was happy to hold all of our purchases for free while we were on the tour, so we were able to shop without worrying about the volume!  (So many cool things … ) 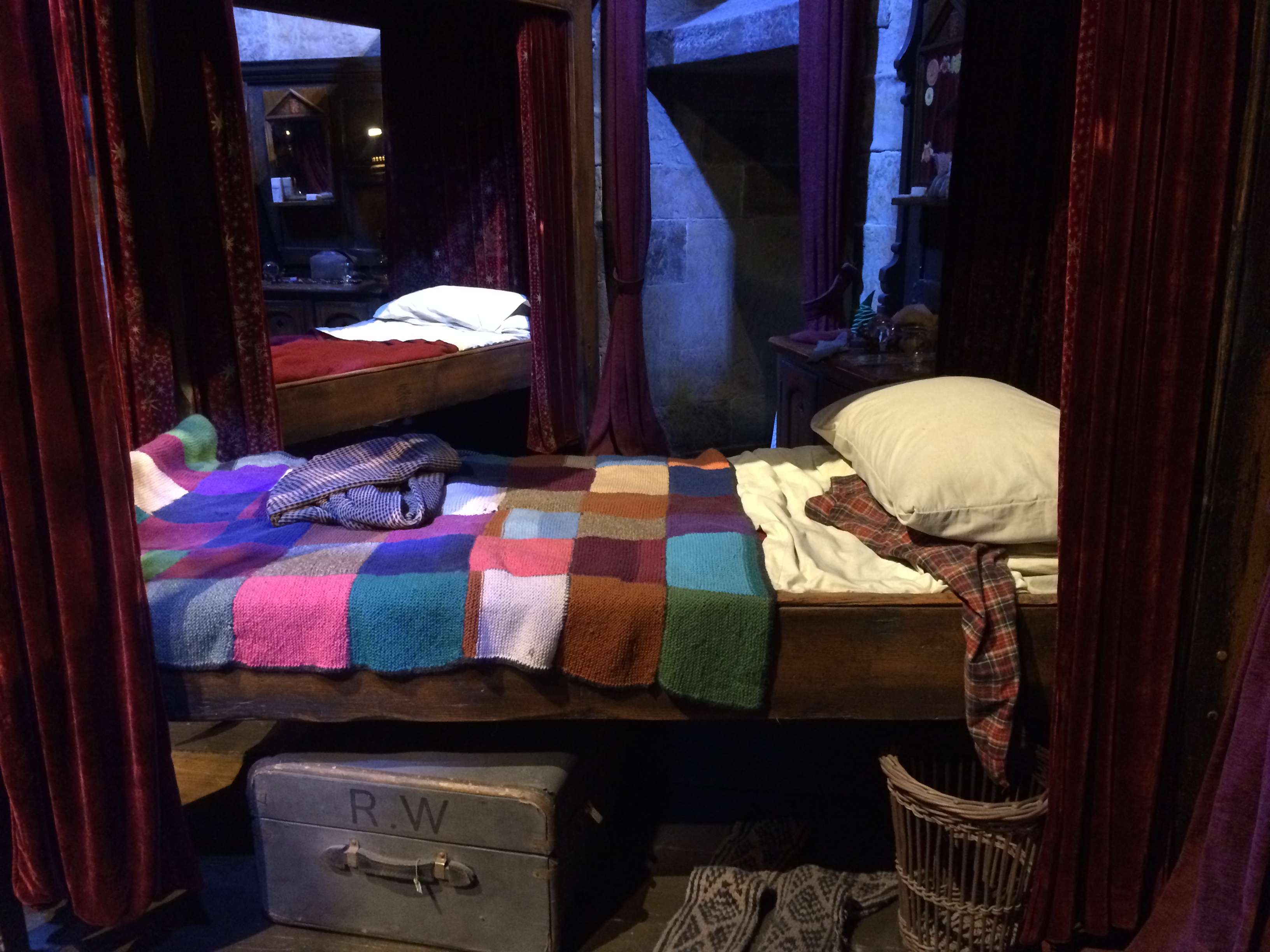 After our excessive shopping, we got in line and started the self-guided tour.  There was so much to see — original sets (the Great Hall, the cupboard under the stairs, the boys’ dormitory, several classrooms and offices, the Gryffindor common room, the Burrow,

Hagrid’s Hut), original costumes, and so very many props.  There were videos explaining myriad details of movie magic (I was truly shocked by the vast number of things I had assumed were CGI effects that were actually practical, mechanical special effects — like the dishes that washed themselves!) and others detailing everything from casting to animal training to making snow.  We saw the Knight Bus, tried Butterbeer, explored Diagon Alley and stood transfixed, staring at *the* model of Hogwarts, it all its intricate and impeccable glory (the pictures do not do it justice).  Not only was it truly magical to get to see so many pieces of the Harry Potter world up close, but I’m amazed at how much I learned, as well. 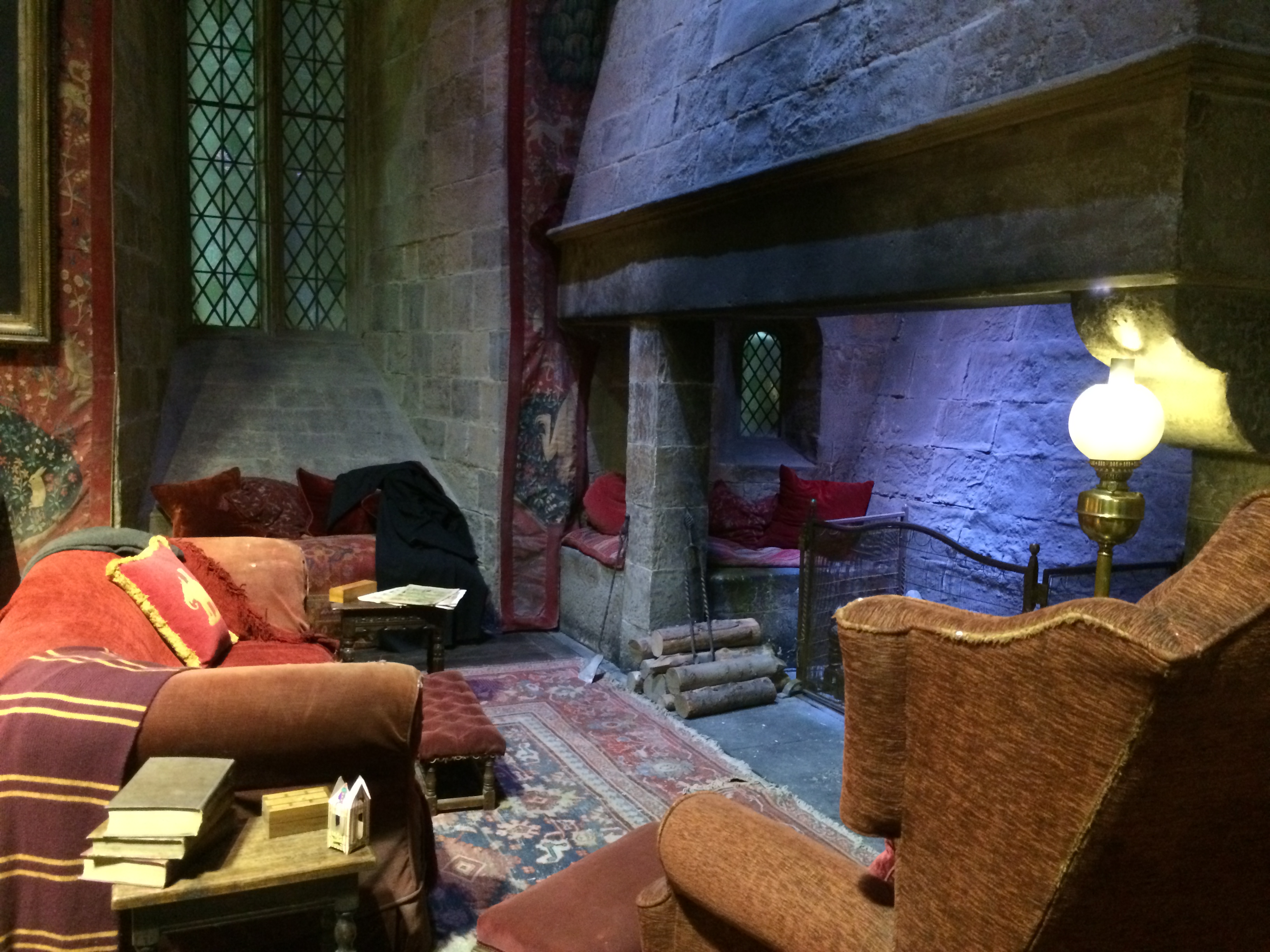 It took us a long time to wander through (and, though we didn’t rush, I think we could have taken even longer).  I have no idea how anyone manages the tour in 3 hours.  It took us over 5.

We had, by then, of course missed our bus, but we simply took a later one, and made our way, tired but very satisfied, back to London.  It was an excellent way to spend a day — in fact, I’d happily go back again one day. 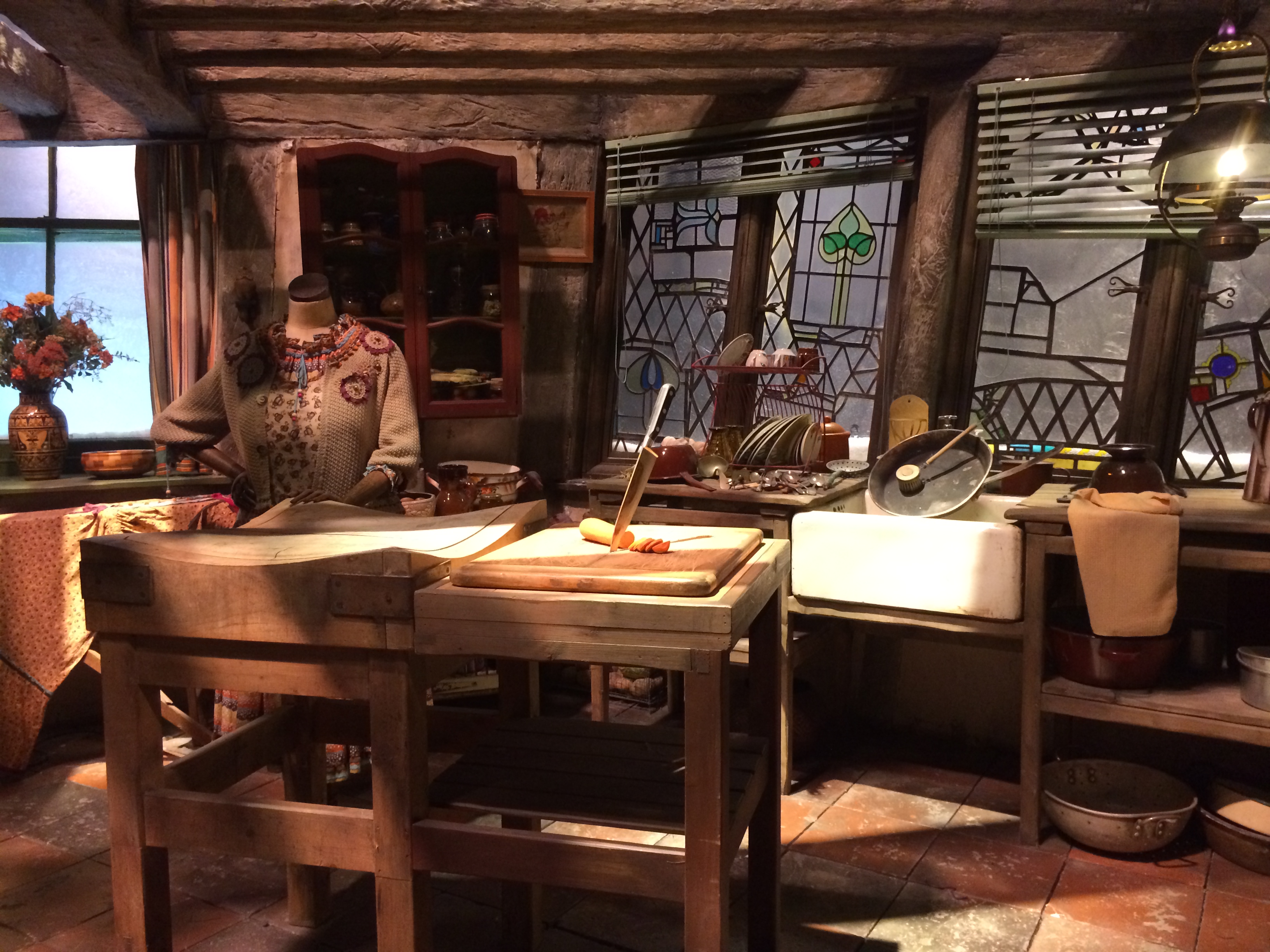