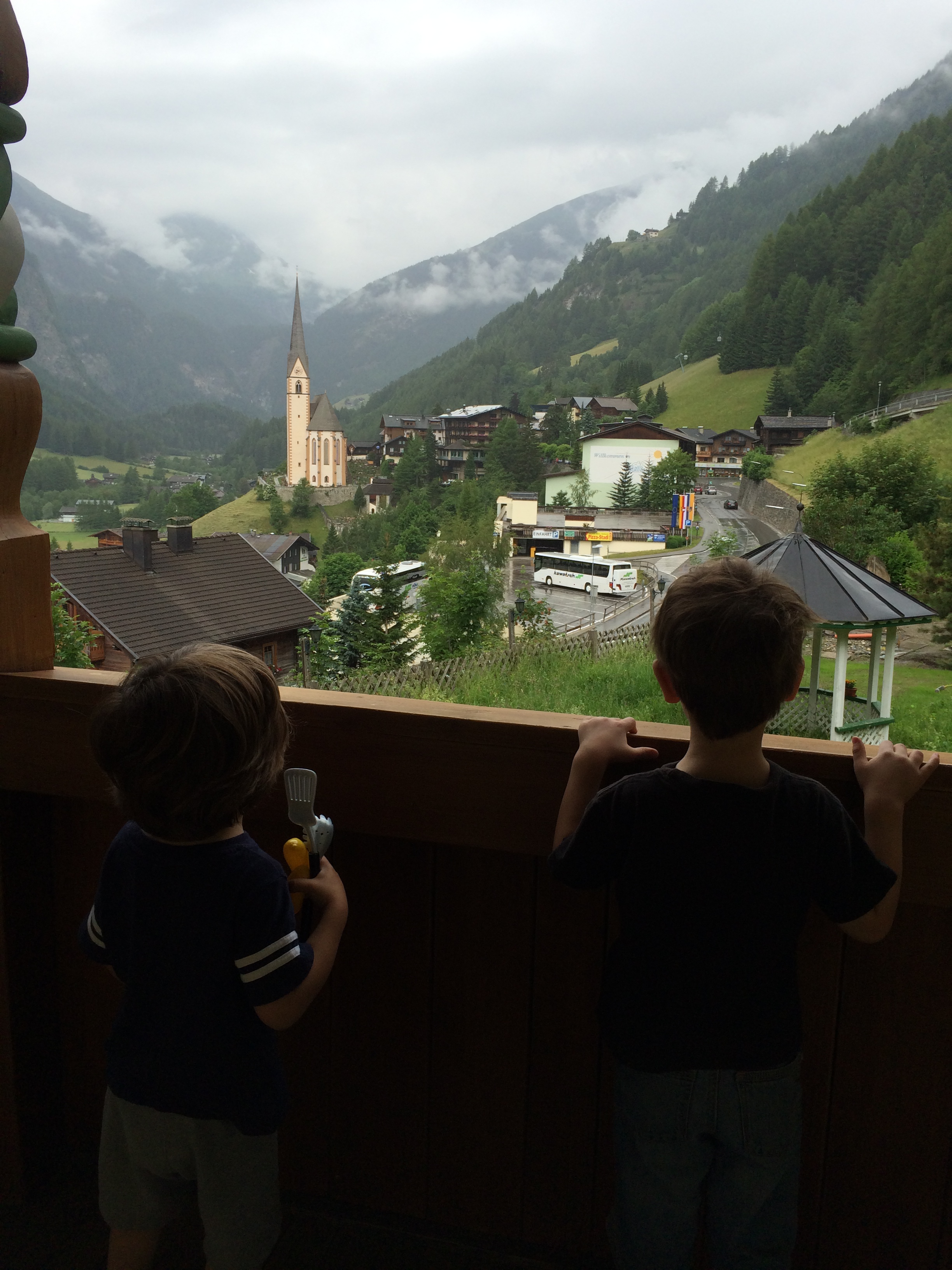 From our hotel room window in picturesque Heiligenblut, we could see most of the town, including the 600 year old church and the summit of the Großglockner, Austria’s tallest mountain.  We could also see the cable cars filing up the hill towards the summit of Schareck, which sits on the opposite side of the valley from the Großglockner.  Liam was completely entranced.  Every time he saw one, he shouted, “Cable car!”  Every time.  (It was lucky for us and for the one other hotel guest that the cable cars didn’t start running until about 9:30 in the morning, so at least we all got some rest.) 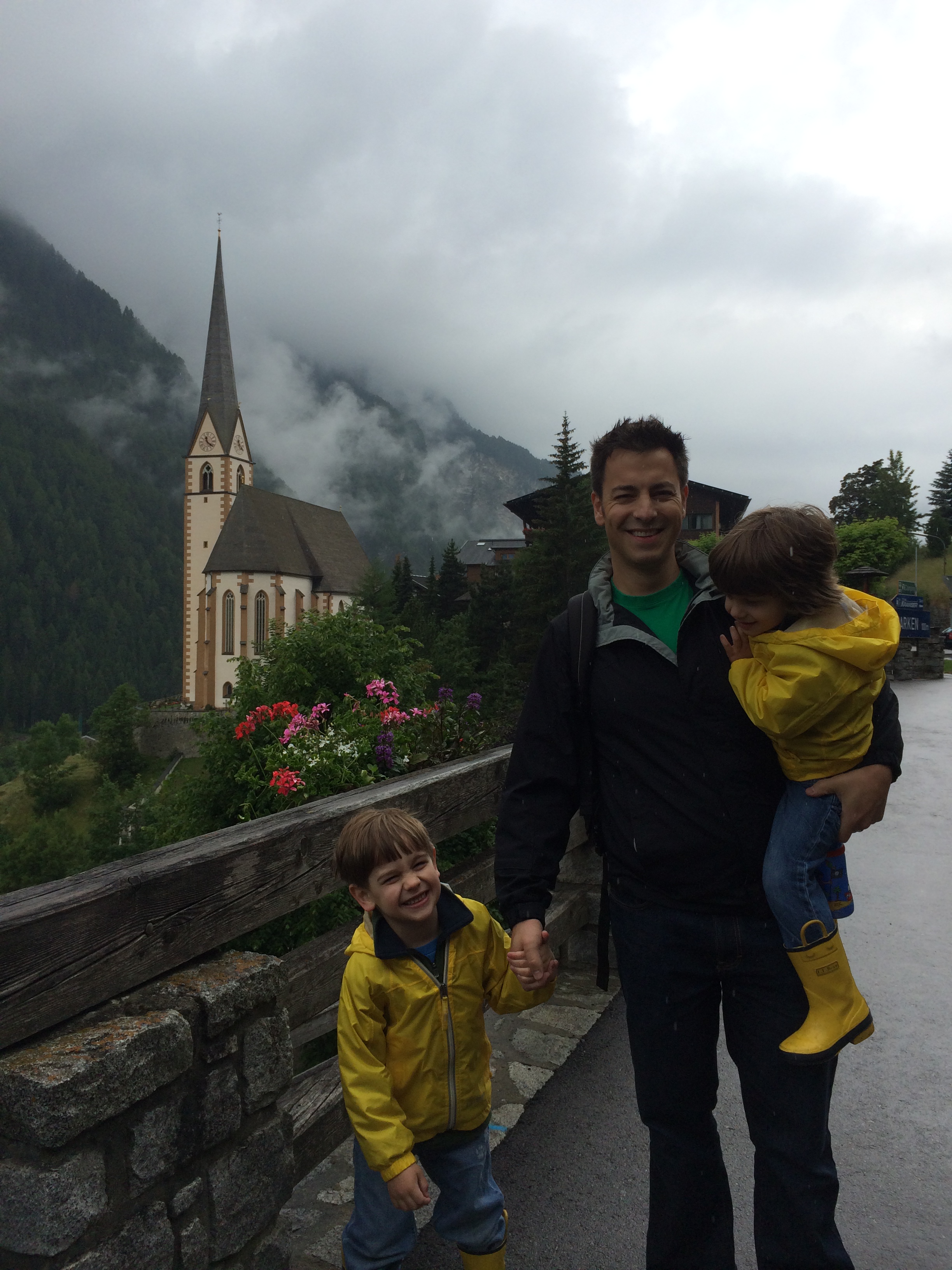 After breakfast our first morning in Heiligenblut (during which we learned that the Dutch put chocolate sprinkles and butter on their morning bread), there was no question about what Liam wanted to do with his day.  He was just so excited.  So, despite the drizzle and the fog and the knowledge that there would be zero view from the top, we decided to head up the mountain in the “cable car!”

The town was really quite small, so we opted to walk through town to the base of the cable car line.  We got a nice (if rainy) tour of the little town.  When we got to the cable car, Liam did not seem to be disappointed by the rain or the fog — he was delighted to be there.  (B was happy and excited, too, though not quite as thoroughly as Liam.)  As we went up and up, we passed over grazing cows and horses, crossed over part of the High Alpine Road, ascended through a thick cloud layer and went up above the tree line.  I’d seen snow at the tops of the highest mountains as we drove into town, but I was surprised by how much of it we passed over as we went up … and by how cold it was at the top. 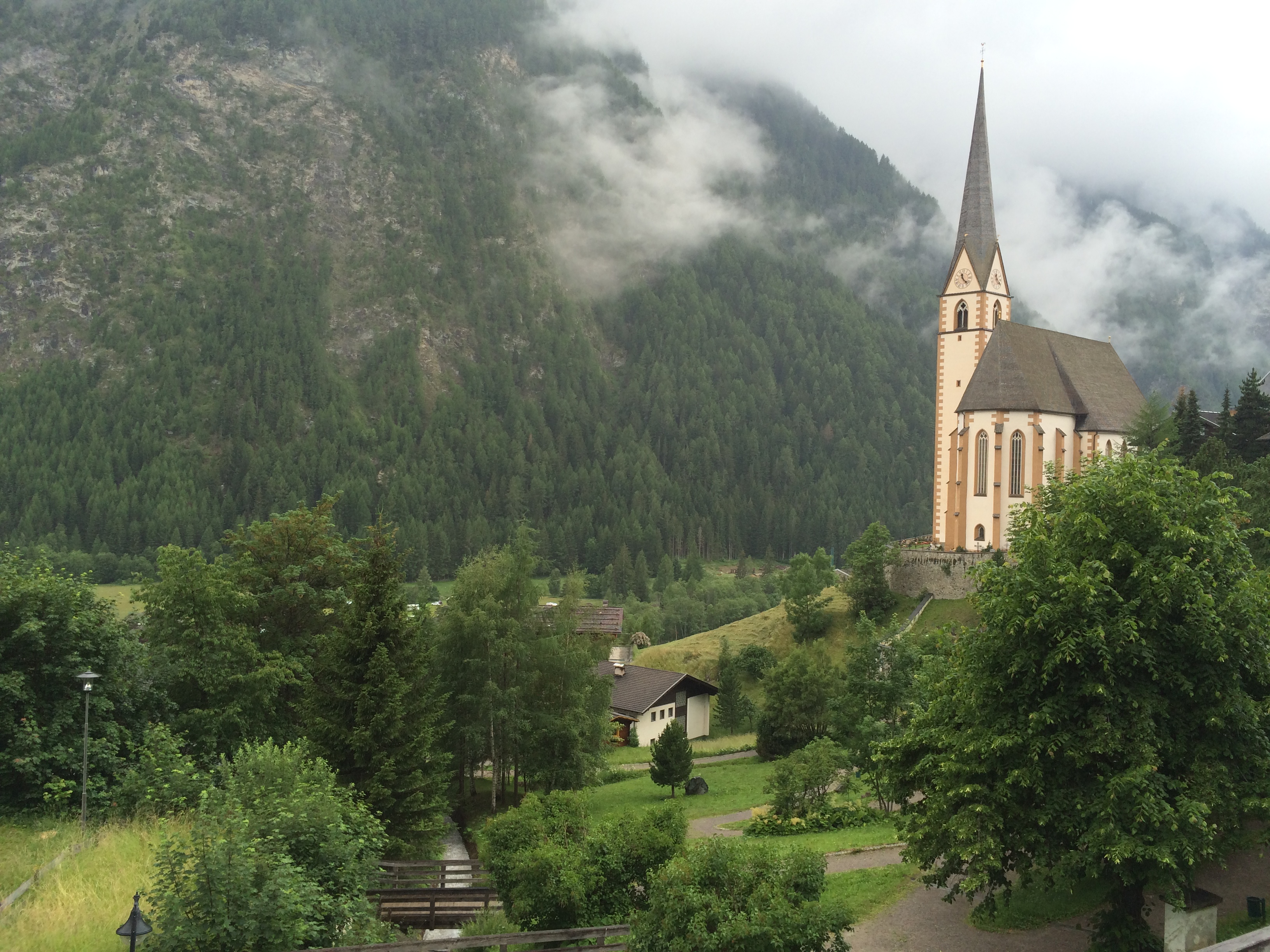 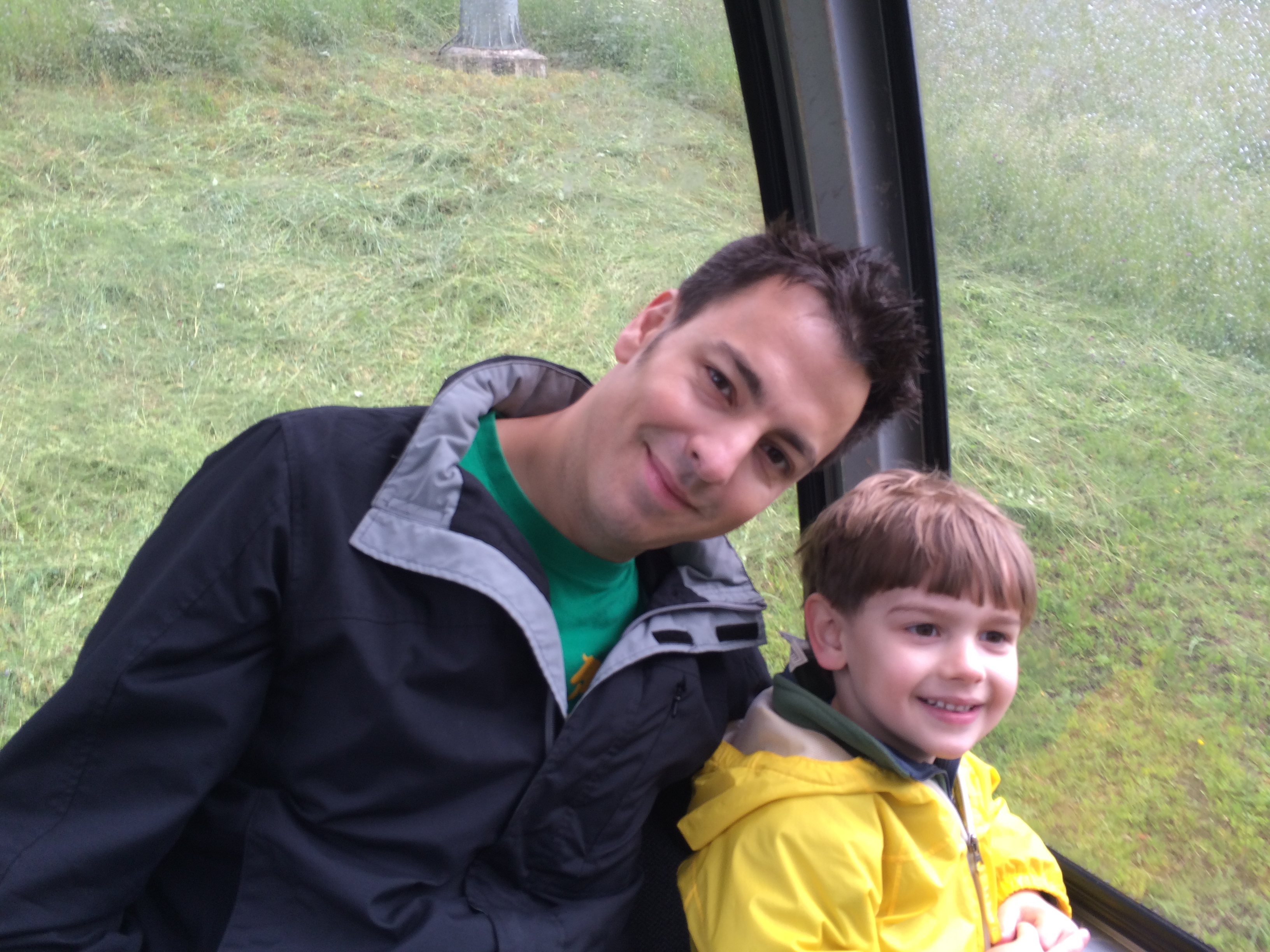 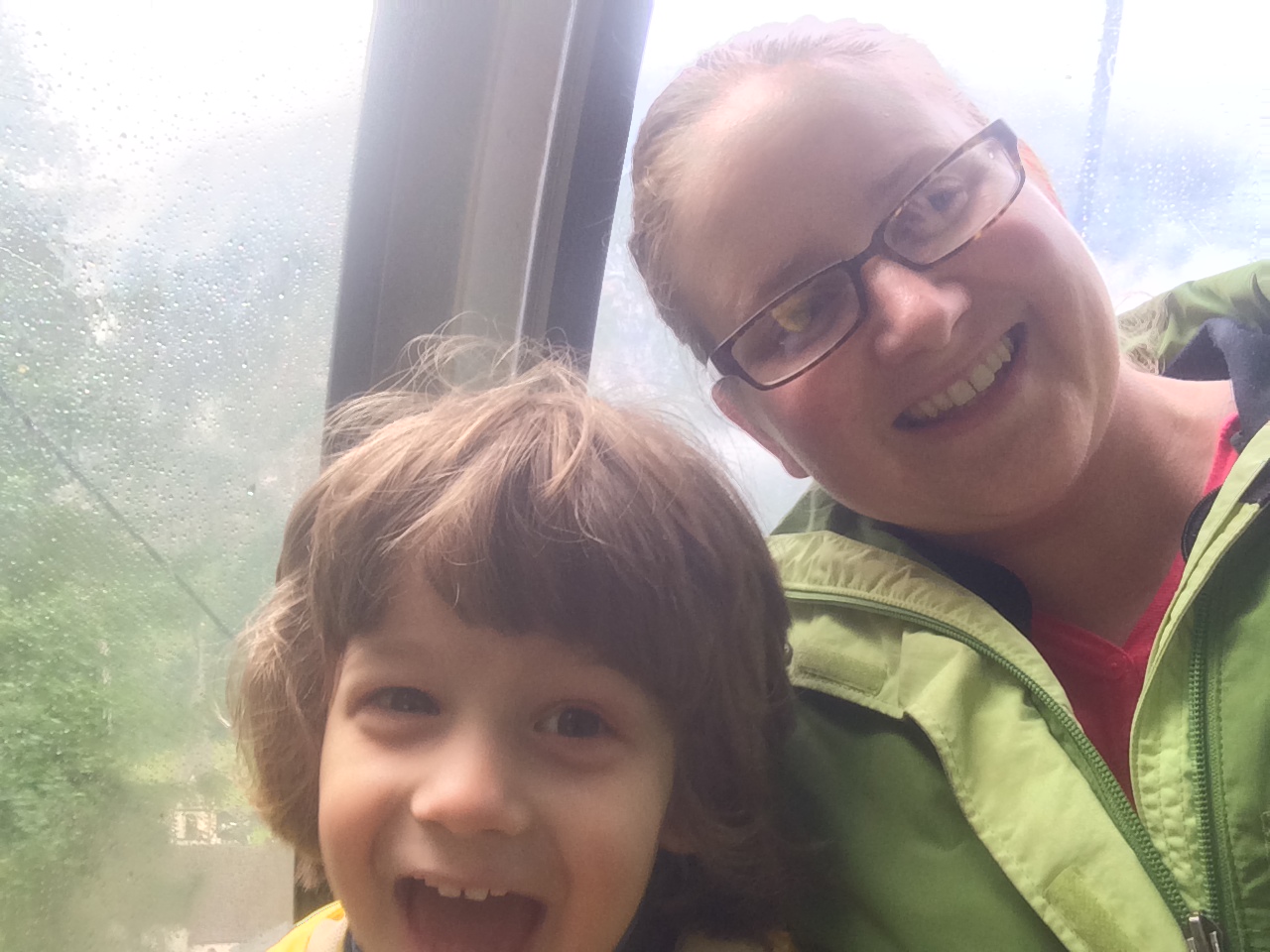 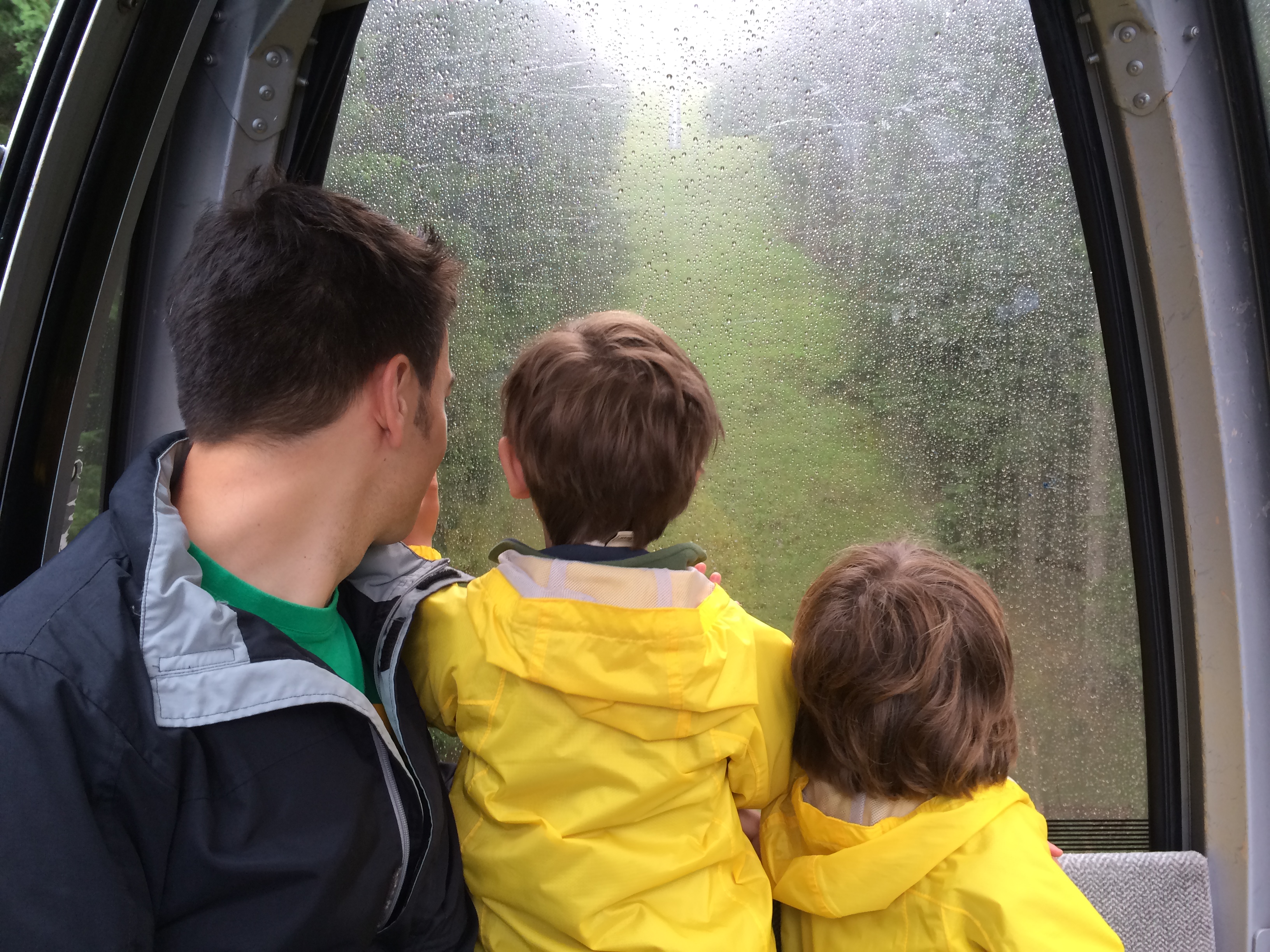 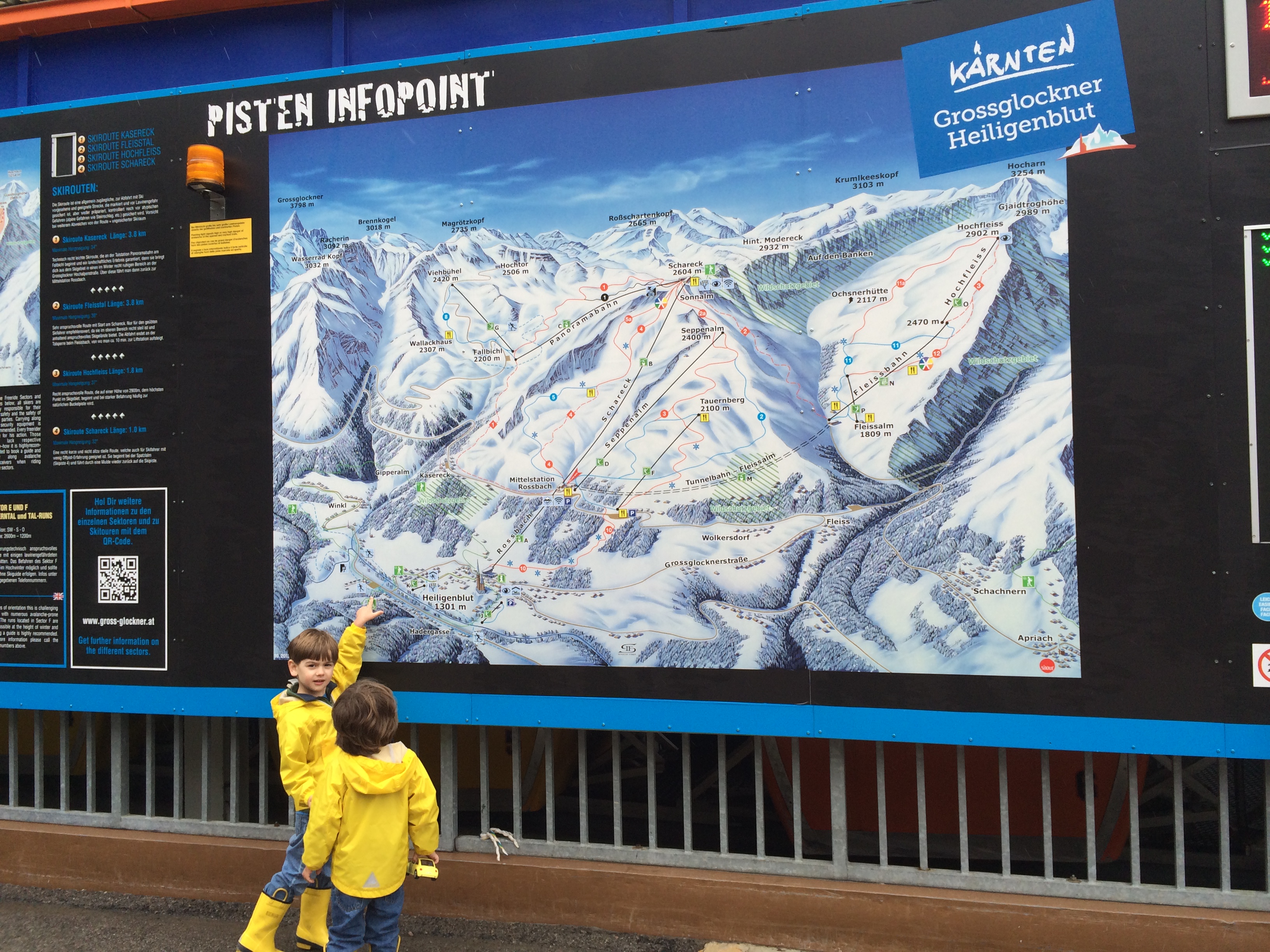 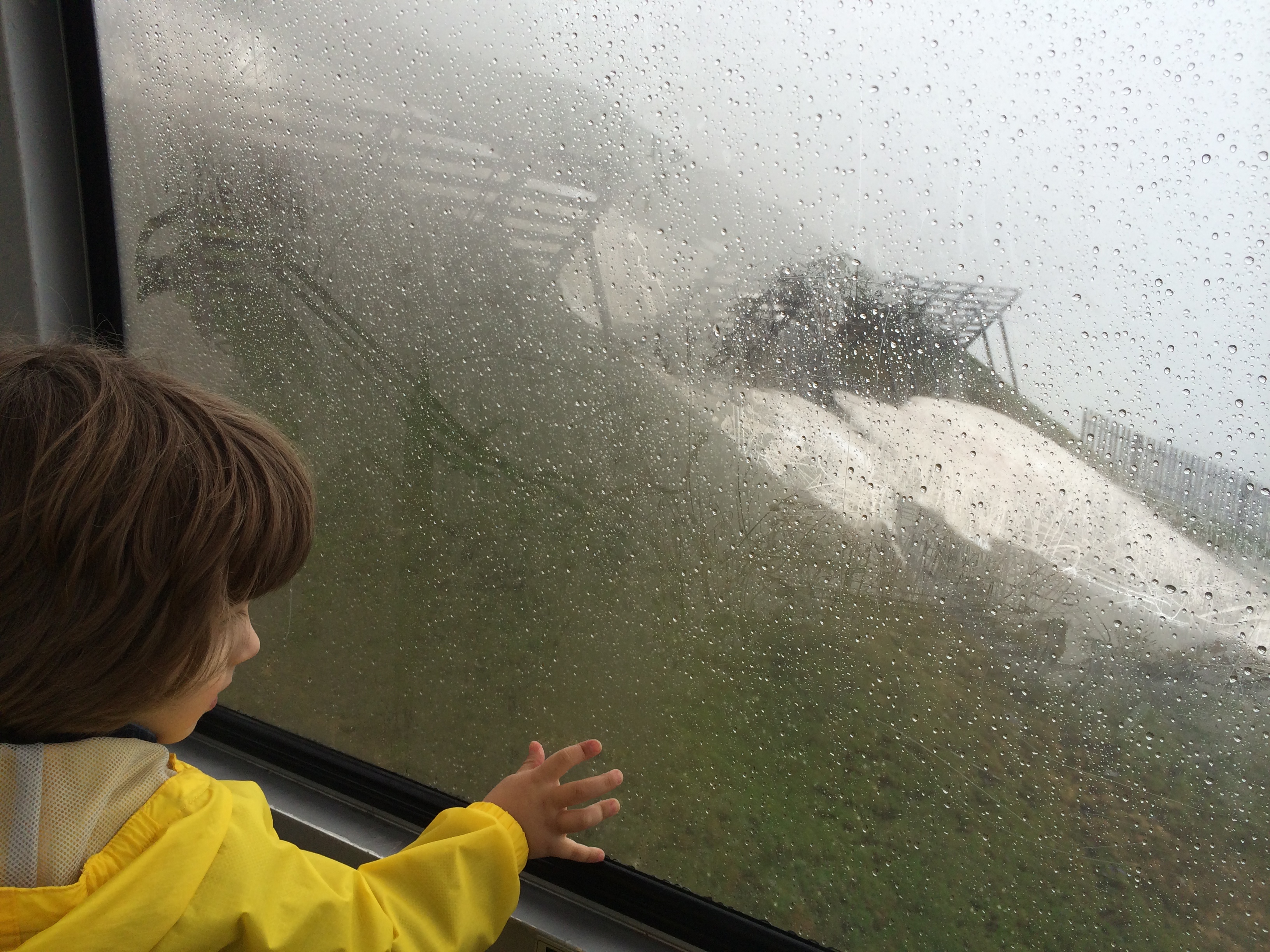 And, we were right — lots of fog and no view.  But, on the plus side, there were only two families up there at the top while we were there.  With not much to see, and a cold rain falling (that was very nearly snow), we opted for a quick stop and visit to the restaurant at the top of the mountain . . . and the kids wanted ice cream, of all things (I went for hot chocolate instead).  After a quick snack, we decided to visit the other cable car, which took us from the top of the mountain and then more across than down the other side.  Our destination was alongside the High Alpine Road (which we hadn’t yet gotten a chance to explore) and is in a spot that is only accessible by skiing (and, I guess, by cable car) from mid-October until May 1 of every year. 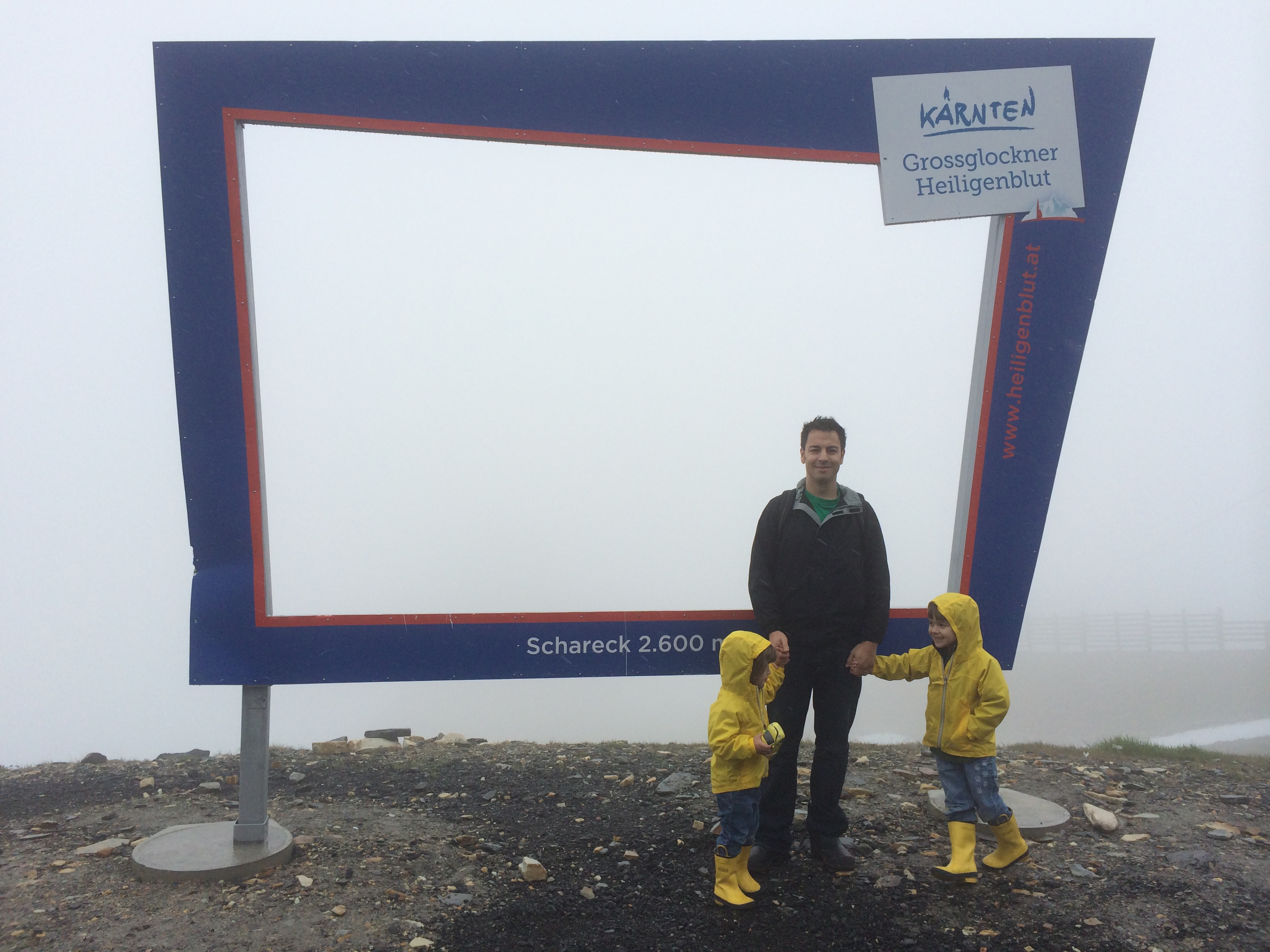 At the base of that cable car line, we were able to fulfill one wish the kids had had, but which I wasn’t sure we were going to be able to deliver on — we found enough snow for a snowball fight.  The whole hillside was covered with large patches of unmelted snow — very slightly slushy, but still frozen enough to walk on top of (which was good, because we’d brought warm clothes, but not warm enough for the near-winter scenario we were faced with).  At one point during out snowball fight, I actually had the thought, “It’s really beautiful here.  Maybe we should come back in summer . . . wait . . . ”  I had completely forgotten that it was July 2nd, and this was, quite literally, as “summer” as it gets in the high Alps! 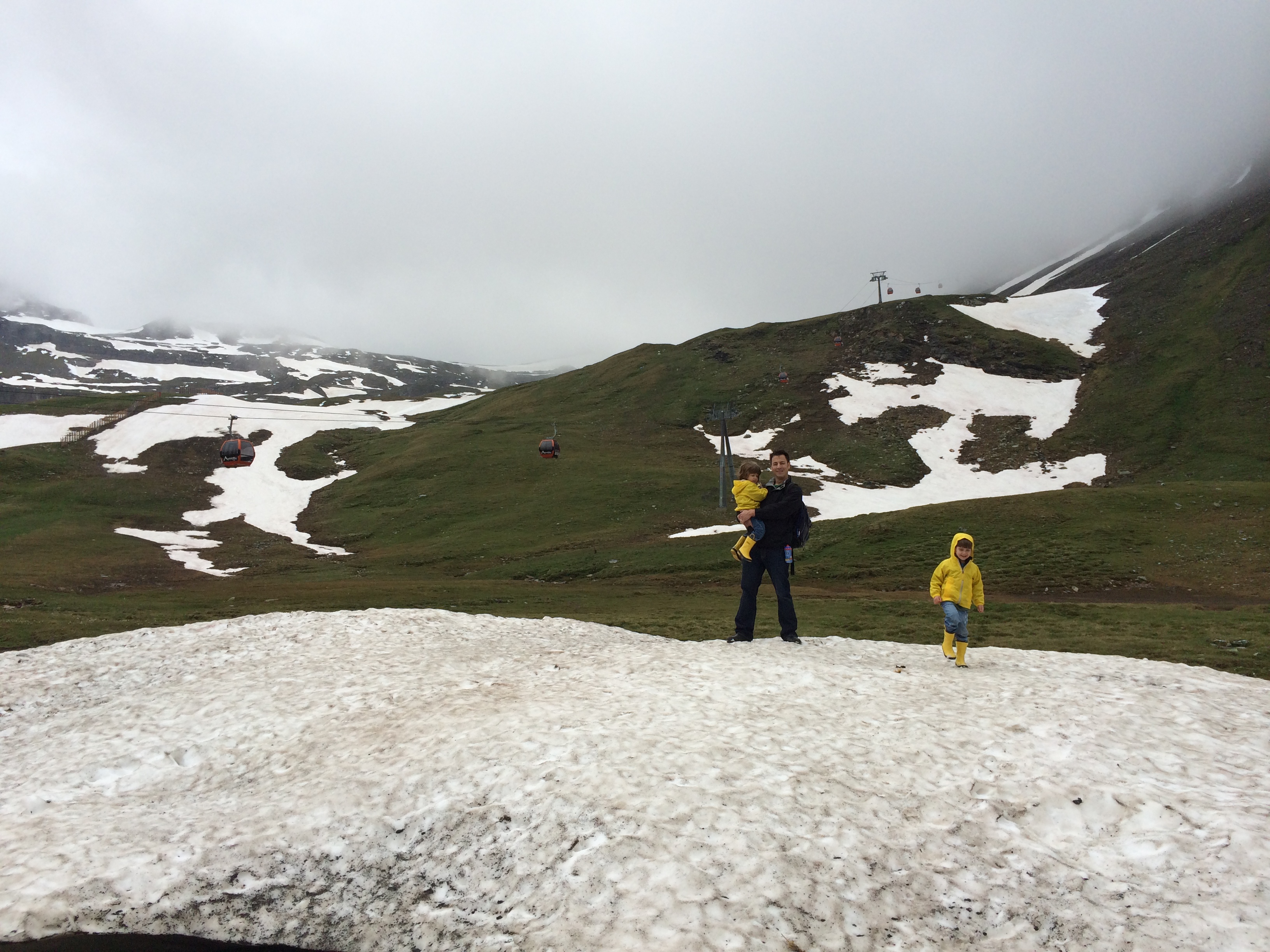 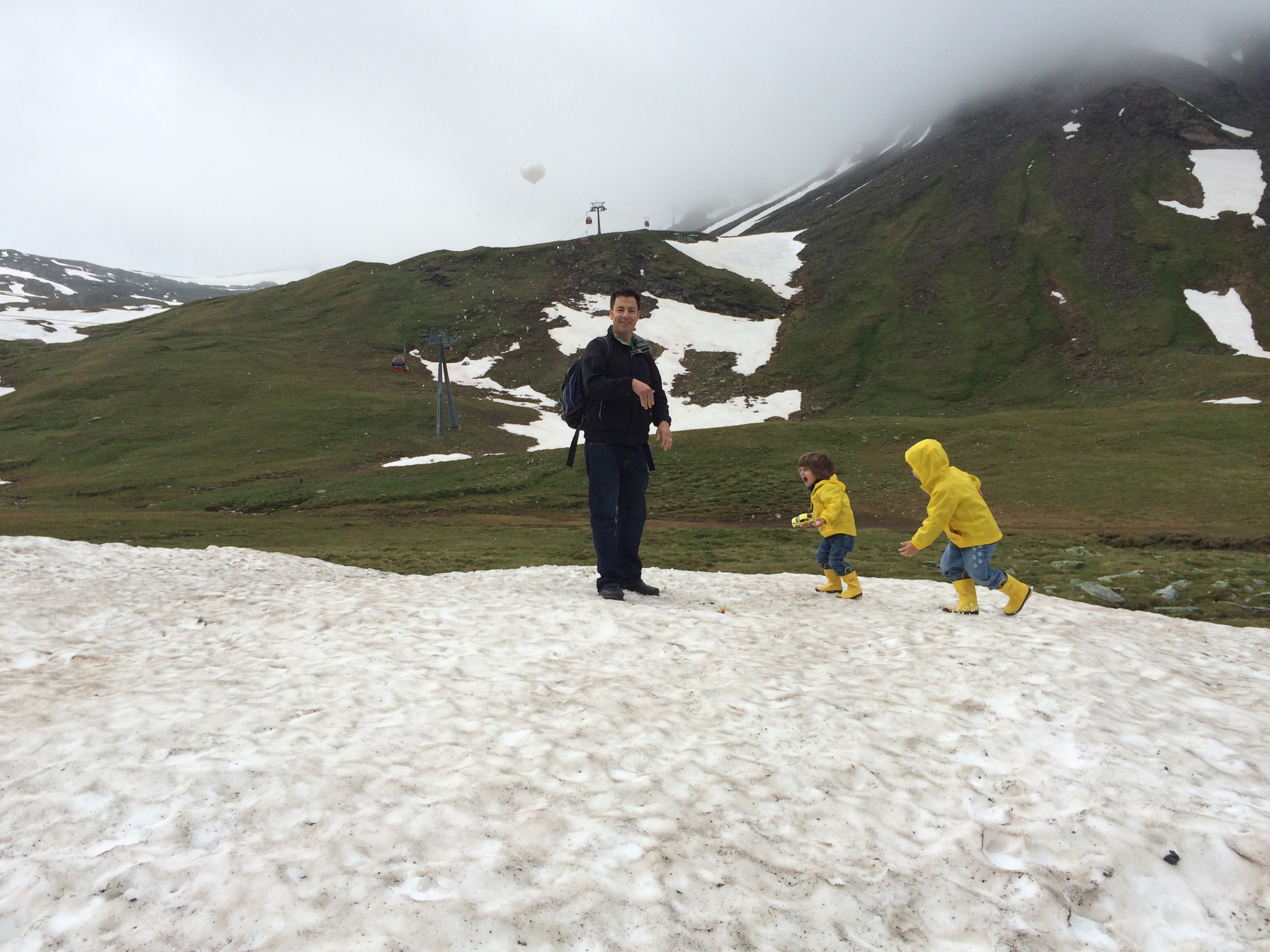 After making our way back up to the summit, and then back down to the valley, we all had an awesome nap.  We didn’t get to enjoy the typical view from the summit, but we had gotten the mountain almost entirely to ourselves, and had a snowball fight in July.  It was a great day. 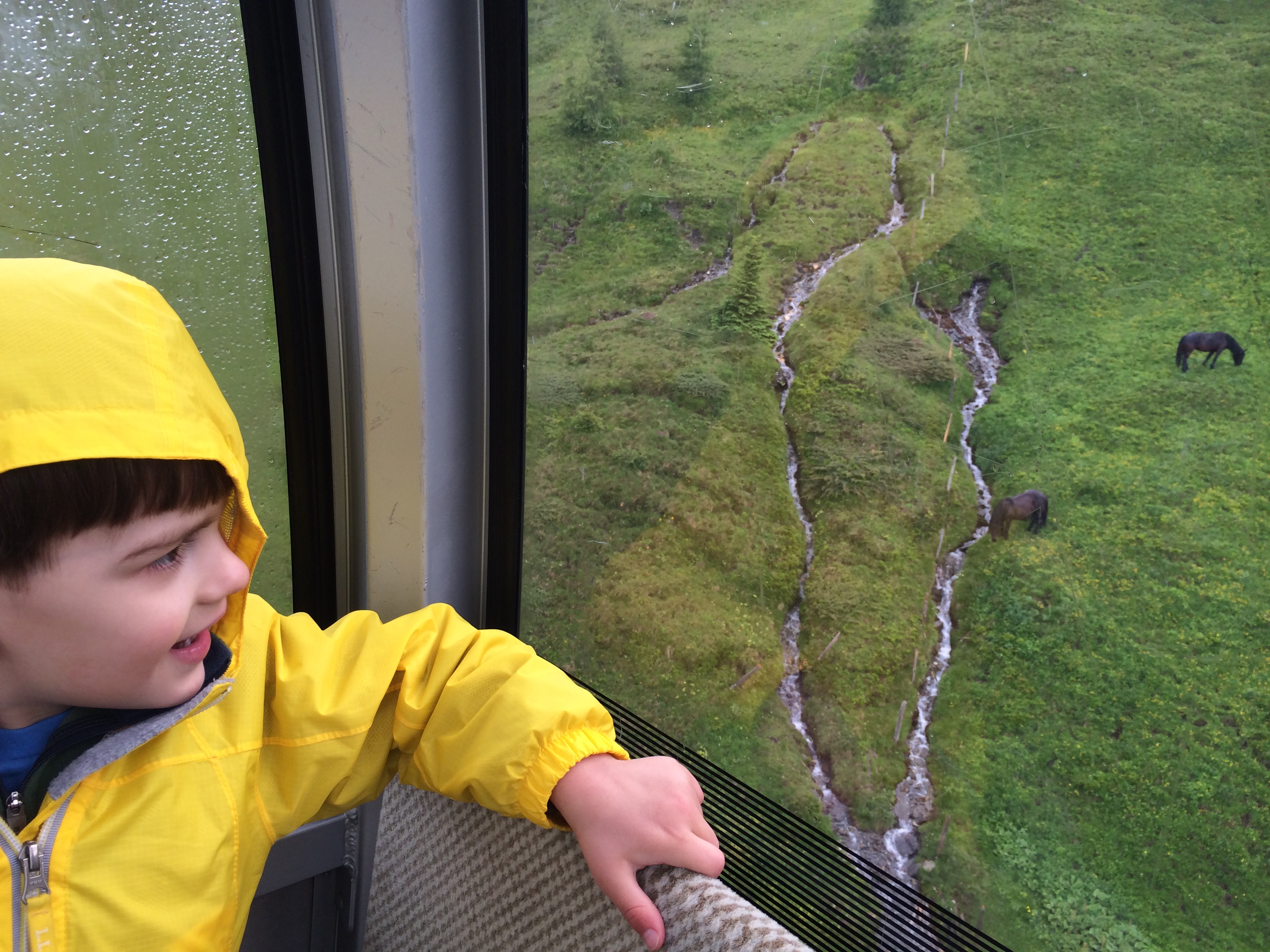 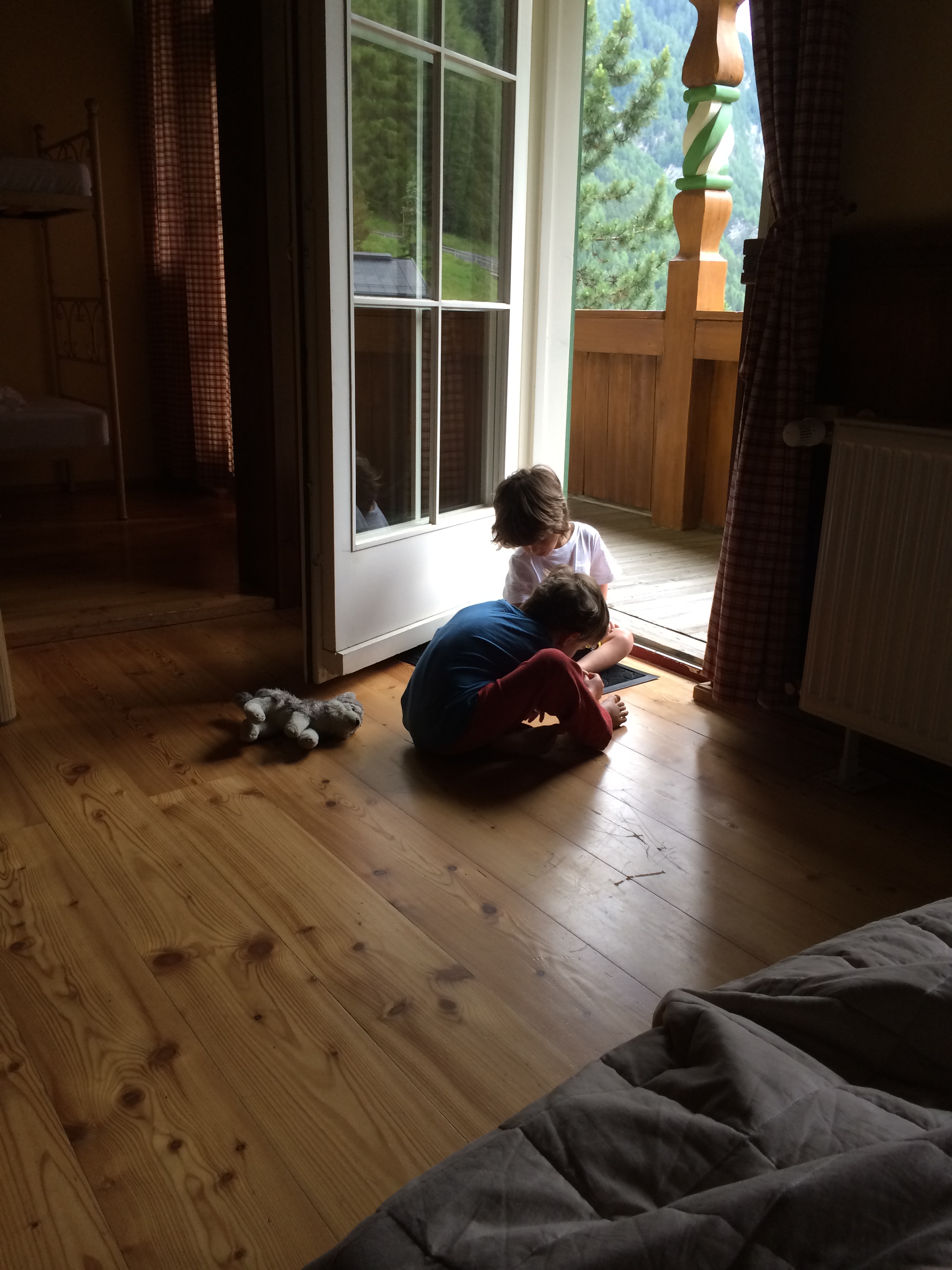 (And then, when we got back, after our splinter removing debacle from the evening before, B offered to check Liam’s feet for splinters.  These guys are just so sweet to each other.)