Living here is a constant adventure (as I think I may have mentioned once or twice).  We are trying new things, seeing new places, and challenging ourselves to learn and grow – constantly.  A lot of it is amazing and wonderful.  I’ve crossed a lifetime’s worth of experiences and travel destinations off of my wish list in the four years we’ve been here, and living in Europe is undeniably cool and enriching beyond what I could have imagined.  But, being far from home, away from our loved ones and outside of our familiar communities can also be intensely hard.  It’s usually worst around the holidays … and even more so when those holidays don’t exist here.  Christmas and Easter and beautiful, fun and festive here.  Thanksgiving and July 4th, not so much.  It causes us to bond strongly, and sometimes strangely, with our fellow Americans.

Anytime I meet an American here — tourist, ex-pat or immigrant — I feel immediately connected to them.  From the first moment, we have so much in common — language, social cues, cultural framework.  It’s just so easy to interact with another American.  We instantly “get” each other (in a way I always took for granted before).  When it’s someone I get to know a bit better, over time, the person is likely to feel like a friend, even if I only know them professionally.

With our pediatrician, who is not only American (and Austrian), but also roughly my age (she’s younger) and the mom to two small kids (her twins are nearly exactly between my boys in age), I have a particular tendency to accidentally sometimes treat her friend-ish, rather than doctor-ish.

But it’s not just down to me and my tendency to treat everyone I see a lot as a friend (which I do).  The nature of living abroad can sometimes change the situation and increase the blurriness between friends and professional acquaintances.  Which is how our pediatrician helped me make pumpkin cheesecake for Thanksgiving this year.

The boys and I were in her office in mid-November, because B had been having some asthma-like reactions to a nasty head cold that just wouldn’t go away (everything turned out fine, ultimately).  While I was paying the bill at the end of our visit (which, here, happens directly to the doctor, because most of them do not have receptionists, nurses, or office staff) we chatted about Thanksgiving, and lamented the difficulty of finding good Thanksgiving supplies so far from home.  Thanksgiving is so very American, and so many of the foods we eat for it are uncommon in Europe.  Sweet potatoes?  Good luck.  Turkey?  No way — besides, it won’t fit in the oven.  Graham cracker crust?  Better start smashing some graham crackers!  Pumpkin pie spice?  Ha ha ha ha — make your own.  And, in the course of chatting, I told her how I’d learned to roast my own pumpkin in order to make my own pumpkin purée for a pumpkin cheesecake I made for Halloween, but that it was kind of a pain, and that I was just going to skip it for Thanksgiving.  We both agreed (surprisingly enough, for Americans) that we weren’t really huge fans of pumpkin pie.  And then she remembered that she had, sitting on a shelf in her pantry, a can of pumpkin pie filling that she was not going to use.

And that’s how I ended up, the following Sunday evening, texting her to remember to bring it to the office, which she did, and B & I picked it up the next morning at his follow up appointment.  And so, our pediatrician helped us have the stuff to make pumpkin cheesecake for Thanksgiving — an Austrian Thanksgiving surprise. 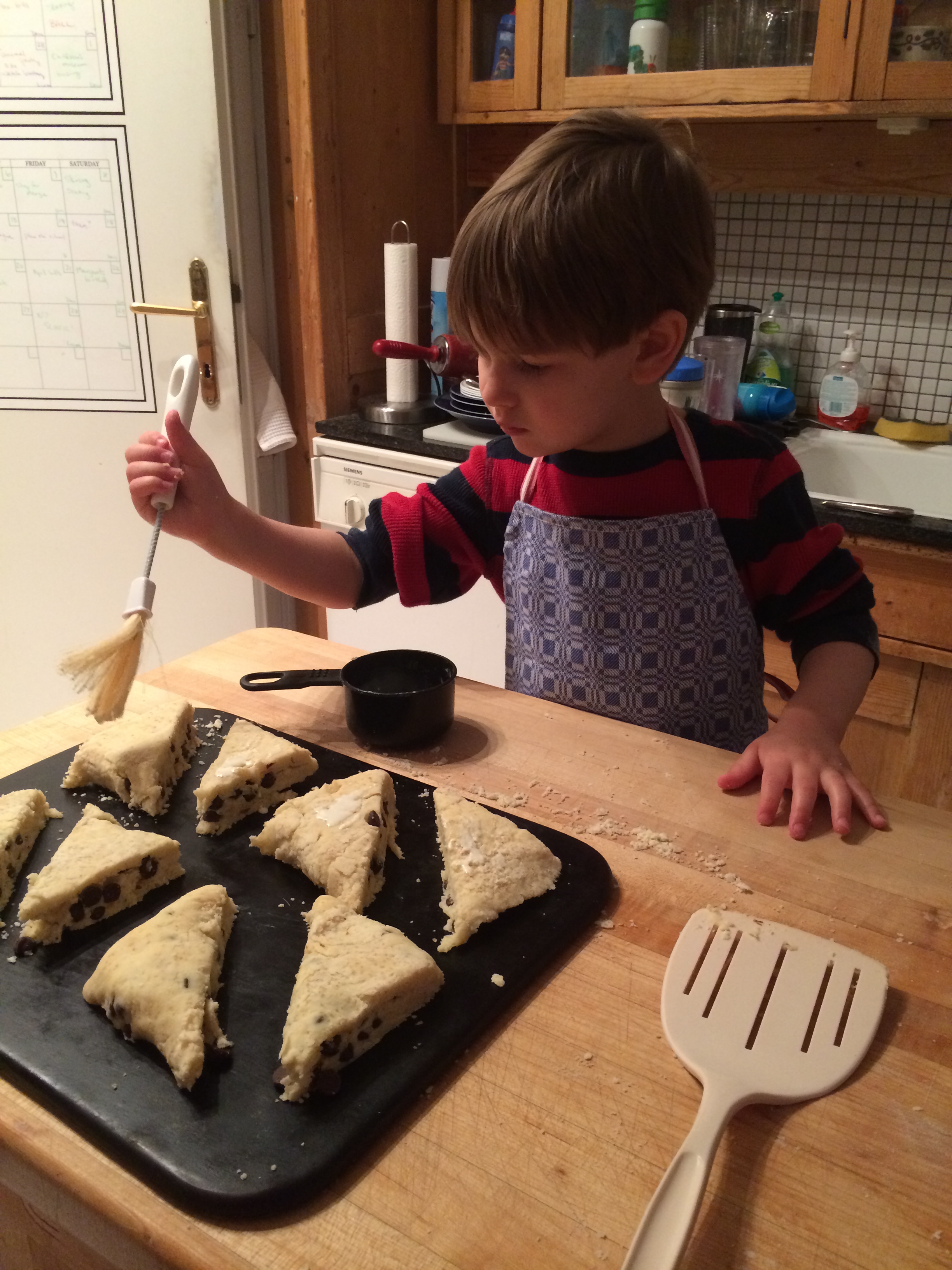 From time to time, the kids and I bake together.  I try to do it each weekend (and we actually manage to do it about half that often).  In theory, it’s a great idea — they like it, I like it, and I believe it’s good life skill training.  They get to practice measuring and following directions, and they will (hopefully) get to adulthood with the idea that they can produce something in the kitchen.

But in reality, it never goes how I imagine it.  No matter how prepared I am, our baking always devolves into disaster — kids throwing ingredients, eating massive amounts of the ingredients or blowing ingredients into each other’s faces, me snarling or grouching the kids into semi-submission while it all starts to feel like torture instead of fun.  About half the time, one or both of the kids either quits early or ends up getting removed to go play something with Daddy while I 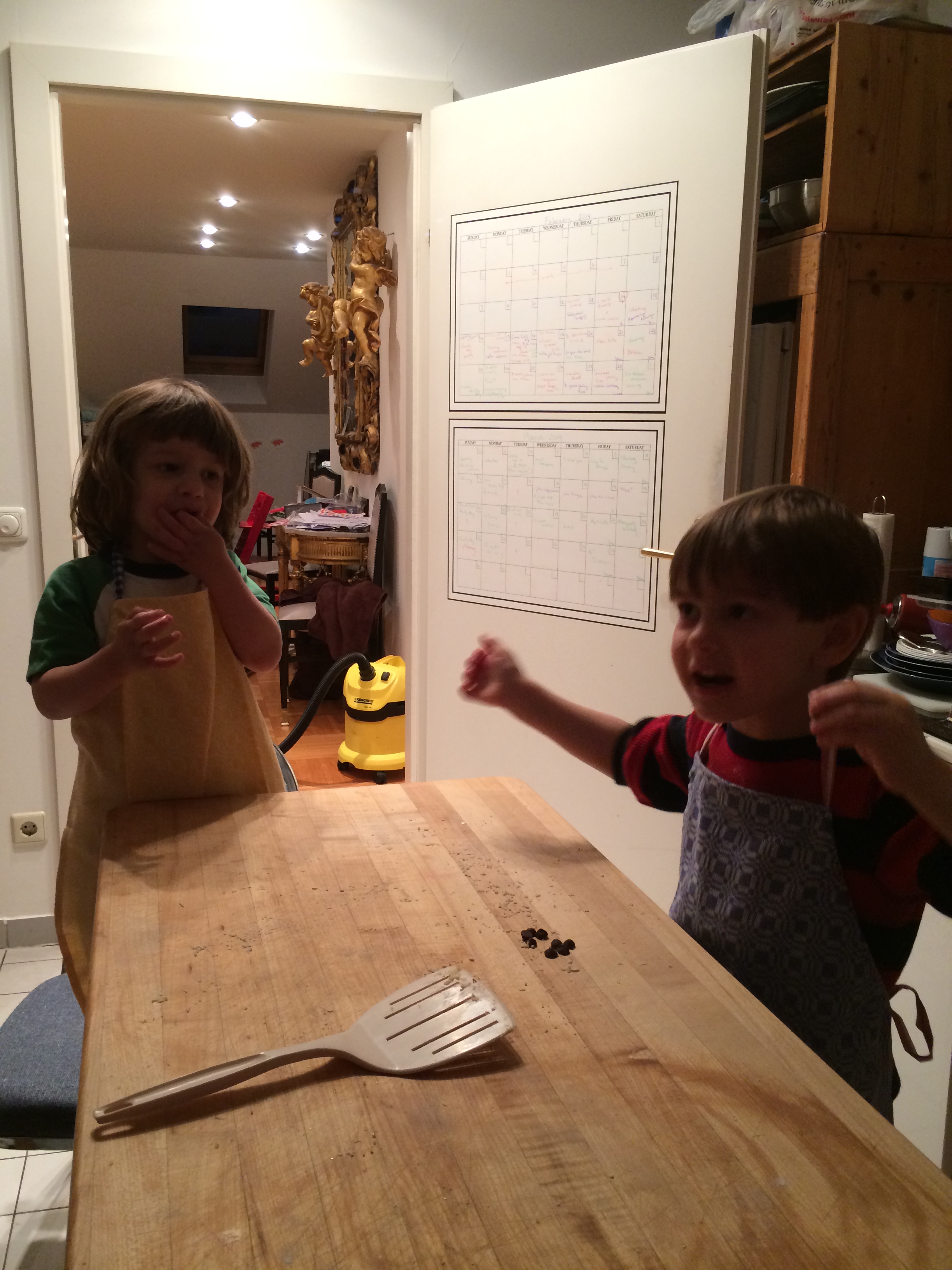 finish up in the kitchen.  I’m completely willing to let go of the quality of the finished product, and I’m 100% ok with the ensuing mess, but I’d like to actually get SOMETHING into the oven at the end of the process . . . and more than anything, I’d like for all of us to enjoy the experience (at least most of the time).

Grandmas, and organized Pinterest-ready moms, I need your help — how do you do it?  How can I make it work?  Any secrets to being somewhat successful at baking AND at allowing all of us to stay in good spirits at the same time?  (I am actually asking.)  We have great intentions, but we just don’t have that much success.  I’d like the reality to more closely resemble the sweet pictures I take during the precious few minutes of calm amidst the calamity.