Today was a huge improvement over yesterday’s torturous adventure. (We’re learning already!) We started out by searching for a place to ski somewhere between totally boring and suicidal. We found a spot, right in town. It had a little “button” ski lift (a type of drag lift with a seat) and a not too imposing hill.

We actually began by trying to interest the boys in a little sledding. Although they were interested in BRINGING their sleds, we couldn’t actually manage any sledding. I think that until you know how much fun sledding can be, the whole thing is just too much work to feel worth it (kind of like skiing, actually).

We knew we wouldn’t be up to a lot of skiing today — especially Jo and I, because we were sore and tired from our lesson yesterday. So, we shared a lift ticket and took turns. Dan went on his own (just to remind himself how to ski — it’s been 10 years and he didn’t ski yesterday) but then he took a very excited B up with him and they skied together. 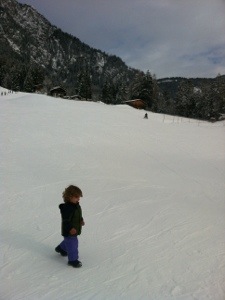 It was wonderful to see. B was so thrilled to be out there, and so brave. He kept insisting that he could go on his own (but we insisted otherwise). He loved it. He did a great job. He’s really a skier now! The smile on his face each time he reached the bottom made every bit of carrying, dragging and aching completely worth it.

Then I took a turn. I was really freaked out. It’s been 10 years for me, too, but I’ve only skied twice and I was never any good. Parts of what I worked on yesterday were a challenge, and that was elementary. Just getting on the lift was difficult, and my legs were shaking from tension, fear and exertion before I even got to the top. I got off the lift, got turned around, and suddenly realized I was up very high. But, my 4 year old had just done it a few times, and I knew I’d regret it if I didn’t try, so off I went. I went very fast and suddenly couldn’t remember anything my instructor had taught me. I managed to slow down enough to gain some control. I managed a few turns, but my legs were shaking and I was going too fast. I fell. It wasn’t too bad. The snow wasn’t icy, and I didn’t fall particularly hard. But I was then faced with the always challenging task of getting up again. My first attempt nearly sent me backwards down the hill, but I finally got it together and got up again . . . and it wasn’t too bad. I had time to take a few breaths and clear my head, and then, as I started down again, I was able to remember my instructor’s advice and actually have a pretty decent time. I was still working very hard, though, and my legs were shaking so hard by the time I got to the bottom that Jo had to get me out of my skis. But, I did it! I skied in the Alps!

Dan & B went a few more times, and then Jo tried, and after I’d rested, I went again. I was worried I was maybe doing too much — that maybe I should end on my first successful run and leave on a positive note. I’m so glad I didn’t. With the confidence that came from a reasonable first run, the second was even better. I was relaxed, thinking clearly, and comfortable enough to even enjoy my surroundings a bit. It was so beautiful up there. I had a view of all the surrounding, snow-covered mountains, some in sunlight, some in shadow, and of the cute little town below me. It was amazing, and beautiful and as peaceful as it can be when you’re gradually accelerating down a mountain in a standing position. I think I got a small glimpse into what people love about skiing. My second run was great. No falls, even! 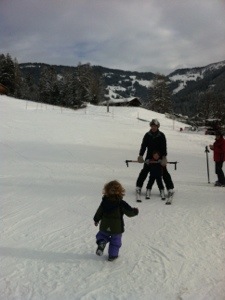 After that, B decided he was done, and Dan took a few final runs. We had been worried that Liam would not handle a day out in the snow well (since he didn’t yesterday), but he did great. He played, ate snow and ran around. He was a happy little guy. (Maybe skiing next time.) The whole area where we skied today was perfect for kids. In fact, we saw quite a few other families in the same situation as us — a preschooler on skis and a toddler with a sled, with both parents trying to keep everyone safe & happy. It was great to see that we weren’t the only ones.

After skiing, we had lunch, returned our skis (which might have actually been my favorite moment of the weekend) and went back for a rest in our hotel.

This evening, though, we ventured out again for a walk, and the boys optimistically brought their sleds along. B chose our direction, and just a short ways from our hotel we were lucky to find a hiking trail, very snow covered and perfect for sledding. After a few tries, he figured it out and had a great time. Liam didn’t want to try, though, so after a bit, we let Liam choose what to do next. He wanted to keep walking. And when we asked where he wanted to go, he said, “Let’s go up the hill!”, so we continued on, up the hiking trail, into the dark.

This is just how Liam is. He likes to walk, he likes to hike, he likes to climb. Mountains make him happy. We thought he’d be really into skiing (maybe one day). But, he likes to go UP, not down. 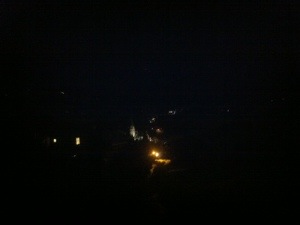 We walked up a short distance, beyond the buildings of the town and into a clearing. And we were treated to the most beautiful view I’ve had in Austria. We were up, a bit above the town. There was snow everywhere, a deep cushion over the field where we were standing and on all the roofs below us. Alongside the packed down path where we were walking, right next to us, there was a stream gurgling under the snow. Below us, the village of Alpbach was illuminated — the church, the Alpine houses still decked out in Christmas lights — and we could see the little dots of light on the mountain facing us, all the little buildings and outposts of the ski resorts. Our clearing was lit by the moon and the stars (some of which actually appeared lower in the sky than some of the lights on the mountains) and behind us, further up the hill, closer to the foot of the mountain cliffs behind them, were the houses of the next village, with Christmas trees decorated all around. Other than the sounds of the stream, everything was quiet, and we all stood and soaked up the magic of the moment.

We had such a remarkable day. The challenge of yesterday has been completely overshadowed by the delights of today. I loved seeing the joy B got from learning to ski and the drive Liam has to explore. Seeing B come down the mountain, the view I had at the top, the breathtaking moment of seeing an Alpine postcard fantasy in real life, the feeling of my little ones’ hands in mine while we walked through the snow — I hope I can hold on to all of these memories. I had some truly special moments today.

The Christmas lights in Vienna are still up.  It’s the 10th of January.  Advent, Christmas, New Year’s and even the Epiphany have come and gone.  And yet, even the very orderly Austrians don’t seem to be in a hurry to take down the lights.

We had to take our tree down early this year.  By “early”, I mean almost a week ago.  And, in a house where Christmas trees typically threaten to be around for Valentine’s Day, it was a lot earlier than ever before.  That, along with the fact that we get our tree later than I’d like here in Austria, means we didn’t get enough of a chance to enjoy it.  We certainly didn’t have it around long enough to get tired of it.  I was sad to see it go.

So I’m glad that the lights are still up in the city.  I love them.  It makes it still feel a little like Christmas, and they help to brighten the evening streets that get dark so early.  They’ll be down soon, and we can carry on through the cold, dark winter until we can feel the difference of the lengthening days.  But I’m so glad to enjoy them just a little bit longer.  I’m in no hurry. 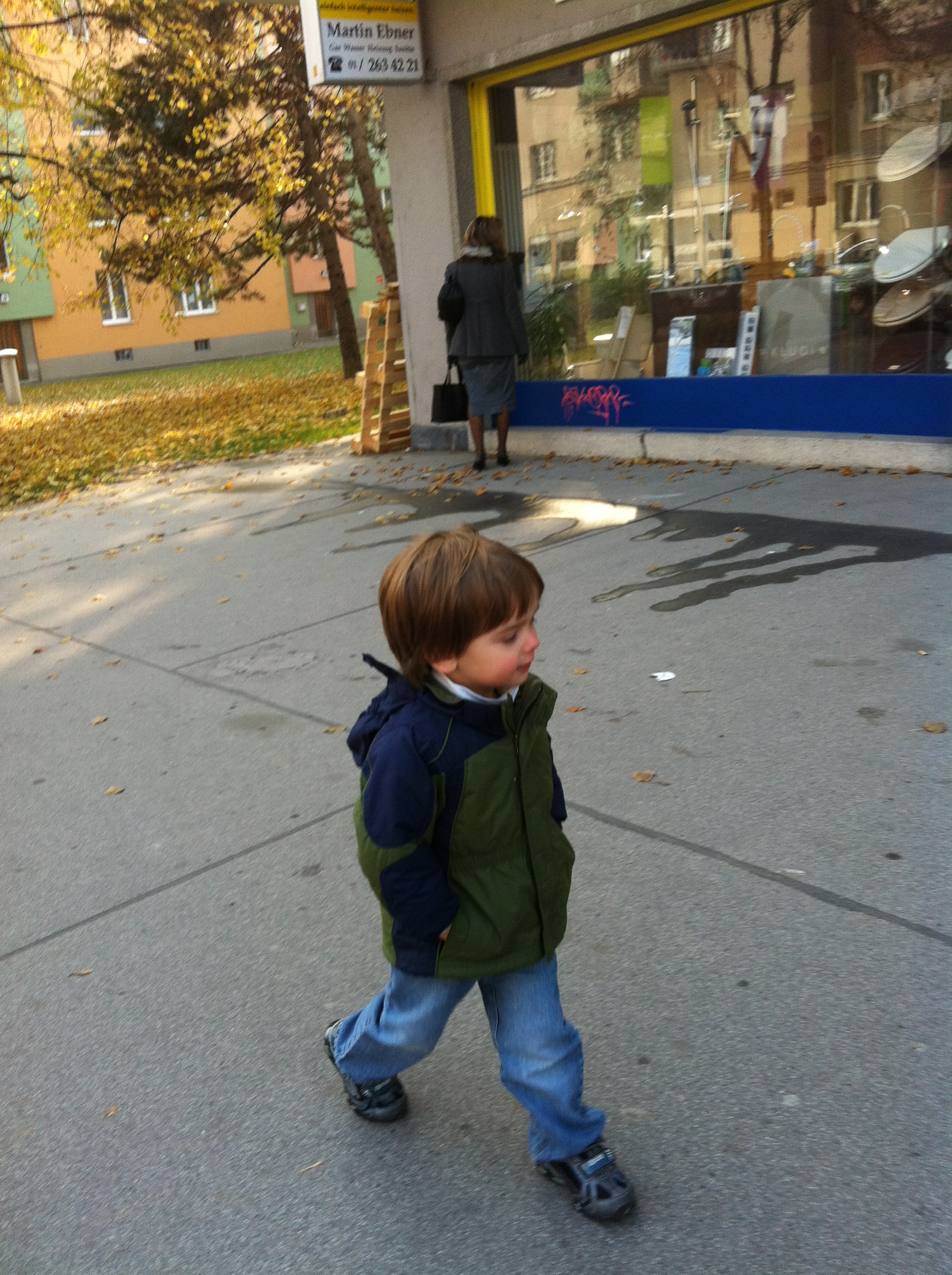 I think it’s the dark of winter that gets to people, more so than the cold.  At a latitude as far north as Vienna, the days are short and the sunlight we get is very indirect — walking to pick up B from school today, at noon, the sun was at an angle that makes me think of late afternoon.  The evening comes early.  Even now, with over a month of shortening days to come, my boys typically wake from their naps in the dark of the evening, groggy and a little disoriented.  Benjamin gets up for school in the dark, and he wakes from his nap in the dark, so he seems to be having trouble separating nap time from bed time — he often wakes from his nap asking me if it’s time to go to school.  (His body isn’t fooled, though, as evidenced by the fact that he sleeps for 10 hours at night and 2 during the day.)I love the symbolism and ritual of using light, in the winter, to push back the darkness, to bring brightness into the night.  We do it at Halloween with jack-o-lanterns, and we do it at Christmas with candles in the windows and lights on our trees.  Vienna is already using its lights to push back on the darkness.  The horse drawn carriages still roll down the streets, illuminated by lanterns.  The cafe windows all glow with warm coziness.  And the lights of the Christmas decorations have begun to be turned on.  The huge Christmas trees at the markets are lit with white lights, and on one street near our house, huge, cylindrical chandeliers of lights have been hung.

I like winter.  I’m not bothered by the dark or the cold.  But part of the reason I’m not bothered, part of the reason I like this season so much, is that we find so much to enjoy in defying the dark and the cold.  I love the warmth and the light, the coziness and the brightness, of this season.  Vienna is full of light right now, and the depth of the darkness around us makes it all the more wonderful.