I’m pretty sure that if we’d never left the US, we would have taken the kids camping by now, at least once, even if we’d only gone as far as the wilds of Grandpa’s backyard.  As it is, we haven’t yet, not really.  But we have gotten a fair bit of practice, having sleepovers in the tent in the living room.

It’s a habit we got out of over the winter.  Mostly, I think, because the boys are now sharing a room, so now every night is kind of a sleepover for them.  But last weekend, the boys requested another campout sleepover in the living room, and Dan camped out with them.  This past weekend, they wanted to do it again, and I took a turn.

It was really great fun, and it made me sorry we’ve gotten out of the habit.  After our usual Friday night movie night (which has sometimes turned into Friday night TV night, because it’s a constant struggle to find appropriate yet engaging movies for a 2 and 4 year old), for which we did as camping themed TV shows, we got the tent all ready.  The boys snuggled up in their sleeping bags (actually fleece lined buntings intended for the stroller — I wish I had one myself) and we got out the iPad to do some stargazing.  We looked up stars and planets and imagined what it would be like to actually be camping outside.  Then the boys curled up for sleep and I got myself situated on the couch.

Not surprisingly, it took a while for them to settle down (because camping is fun!) but they did, and drifted off peacefully, although I realized, prior to falling asleep myself, that both boys had wiggled out of their “sleeping bags” and out of the tent entirely — they were actually cuddled up together out on the carpet.  But they were happy.  Liam woke once in the middle of the night unsure of where he was, but I helped him get back into the tent, back into his sleeping bag, and back to sleep.

We had a great night.  And waking up to my boys snoozing peacefully in their tent was pretty fantastic.  I’m glad we’ve revived the living room campouts. 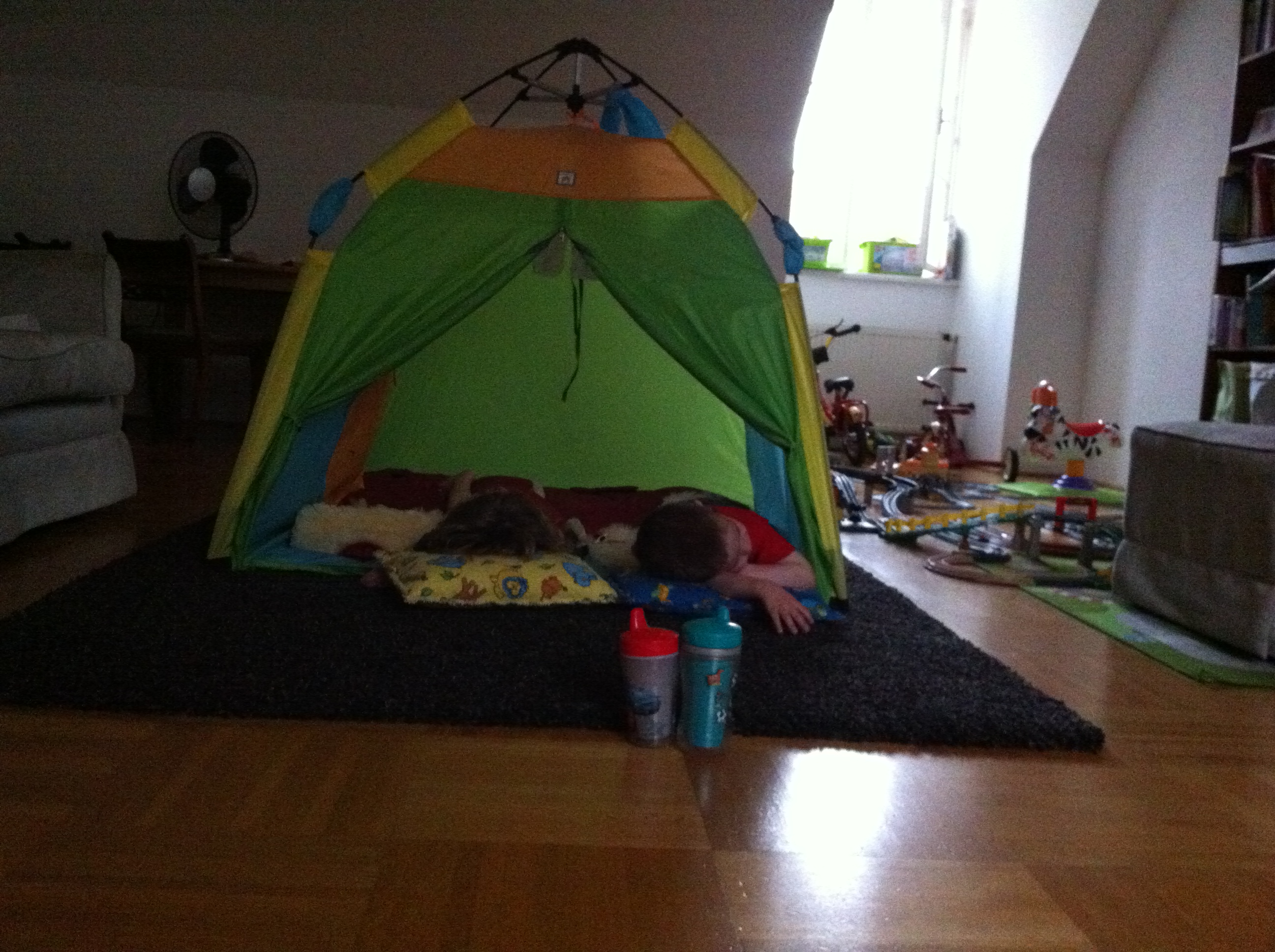 Benjamin is really getting in to the idea of camping.  For several practical reasons, starting with the fact that we have a 10 month old and ending with the fact that our tent is in storage somewhere in Virginia, that isn’t going to happen anytime soon.  However, he loves to play “tent”.  He climbs under the covers of a bed, or under any available blanket, sheet or towel, puts all of his stuffed animals or other precious toys inside and pretends he’s in a tent.  He always has to play tent with someone else — usually his Grandma.  This has provided hundreds of hours of enjoyment for Benjamin and various members of his family.

Last night, he and Grandma did one better — Benjamin actually had a sleepover with Grandma on the futon in the living room.  Benjamin hasn’t ever had such an intentional sleepover.  (There were a few times, as a baby, that I took him to bed with me out of desperation, and then there were the infamous times when we first moved here when he was sleeping on the couch or on a mattress on the floor which probably felt a lot like camping — they did to me, at least.)  He absolutely loved it.  Apparently, he fell asleep nearly instantly and slept all night.  He was so happy to wake up with his Grandma this morning, and he just asked me if he could have a sleepover with his Grandma again tonight (which I’ve vetoed, because I’m not sure how well he really did sleep, as he was a bit out of sorts all day).  Later this week, Grandma is going to “camp out” on the air mattress on Benjamin’s floor in his room, too. 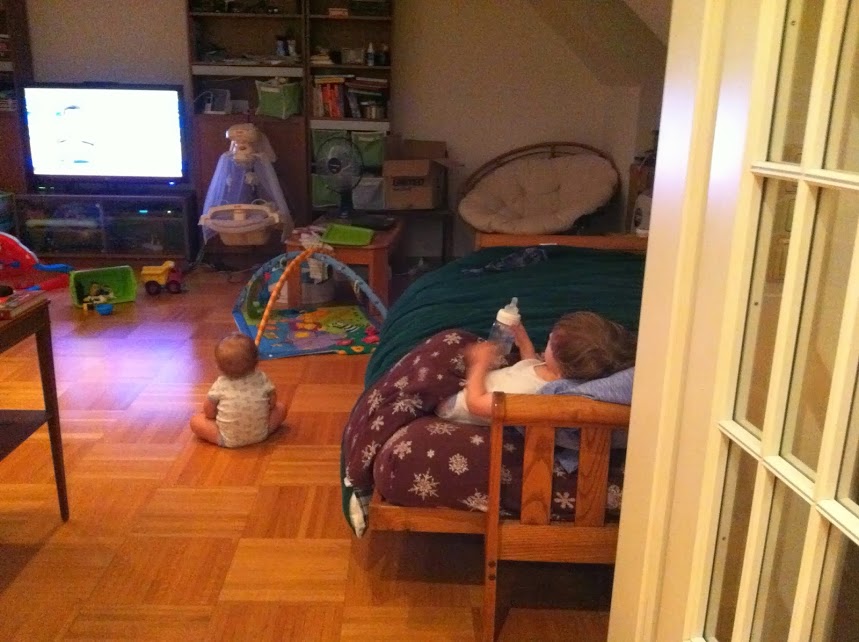 I think he’s really enjoying having his Grandma visit, and getting to go “camping”.  Other than being outside, and roasting marshmallows, the best part of camping is getting to have a sleepover, anyway.  I’m so happy that Grandma is here to visit — I love having her here, and I know how much this means to my boys. 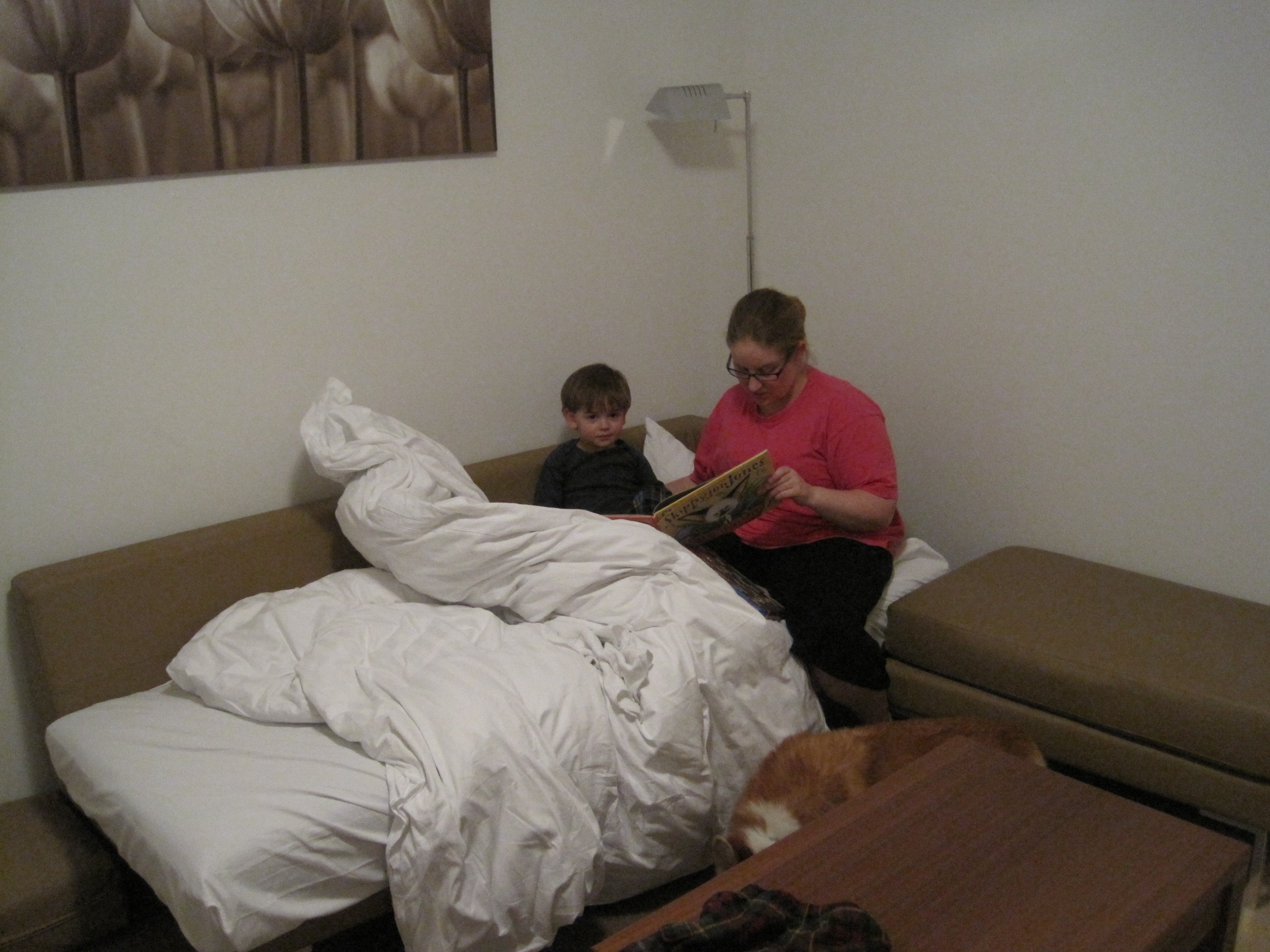 We left behind our first “home” in Vienna this morning.  I already miss it.  We moved into a new place, in another part of the city.  It’s smaller, it’s not as nice, and it’s not as much in the area that we want to be in.  That said, it is really neat to check out a different part of the city, and I think it will ultimately give us a more well-rounded view of Vienna.  It’s clean, it’s safe, it’s near a metro and it has everything we really need.  Benjamin is sleeping in the living room, but he’s happy.  Liam has a gigantic portacrib (I think he’s the only one whose sleeping situation improved) and he’s asleep and happy, too.  That’s what’s important.

Yesterday, I was really stressing about this place and this move.  It’s not ideal, and it’s not what I wanted to have happen.  I can think of several other places I’d rather be staying at the moment (not all of them on this side of the Atlantic).  But, so what?  It’s not really a big deal.  As my sister, Amanda, said, “This will be a fond memory soon.”  She may be entirely right.  It’s quite possible that the effort that goes in to making this place our home for the next week will cause it to be remembered fondly in the end.

So often, it’s the shared challenges that we remember with a laugh and a smile with our families.  I was talking with my dad this afternoon about exactly that, when he reminded me of “that camping trip when it rained”.  I think everyone who has camped with any regularity has a good “rainy camping” story, and in our case, we awoke in the middle of the night with the runoff from the mountains actually running (with some volume and force) THROUGH the middle of the tent.  I think it was spring time, and not warm at all.  We spent the rest of the night cranky and sodden in the car, and went damply home (early) the next day.  At the time, I’m sure I was grumpy about it.  I know I was wet and cold.  Today, my dad and I shared a sincere and happy laugh about it.  I really, truly, remember that trip fondly.  It’s a memory I share with my dad and my siblings.  We ALL remember it.  We shared the struggle together, we got through it together, and it even contributed to my mental picture of myself (and my family) as relatively hardy campers (even though we didn’t last the rest of the weekend, it didn’t stop us from camping again, many times).  I don’t remember exactly how old I was (early teens?) and I don’t remember much of the other details about that trip (they all tend to blend together as a happy melange in my mind).  But I think of it fondly.  I think if it’s possible to have a happy teenage memory of being soaked, miserable and cold in the woods with my family, then it’s certainly possible that this little apartment will be remembered with a laugh and a smile (if at all) as part of our adventure.  Thanks, to my family, for reminding me of that.