I was a little apprehensive, after a year and a half of only relatively short flights with the kids, about our very long trips home and back across the Atlantic.  Circumstance (and winter weather) meant delays — long hours waiting on the plane or at the airport — which didn’t make it any easier.  Even so, I was pleasantly surprised at how well we all fared on our journey. 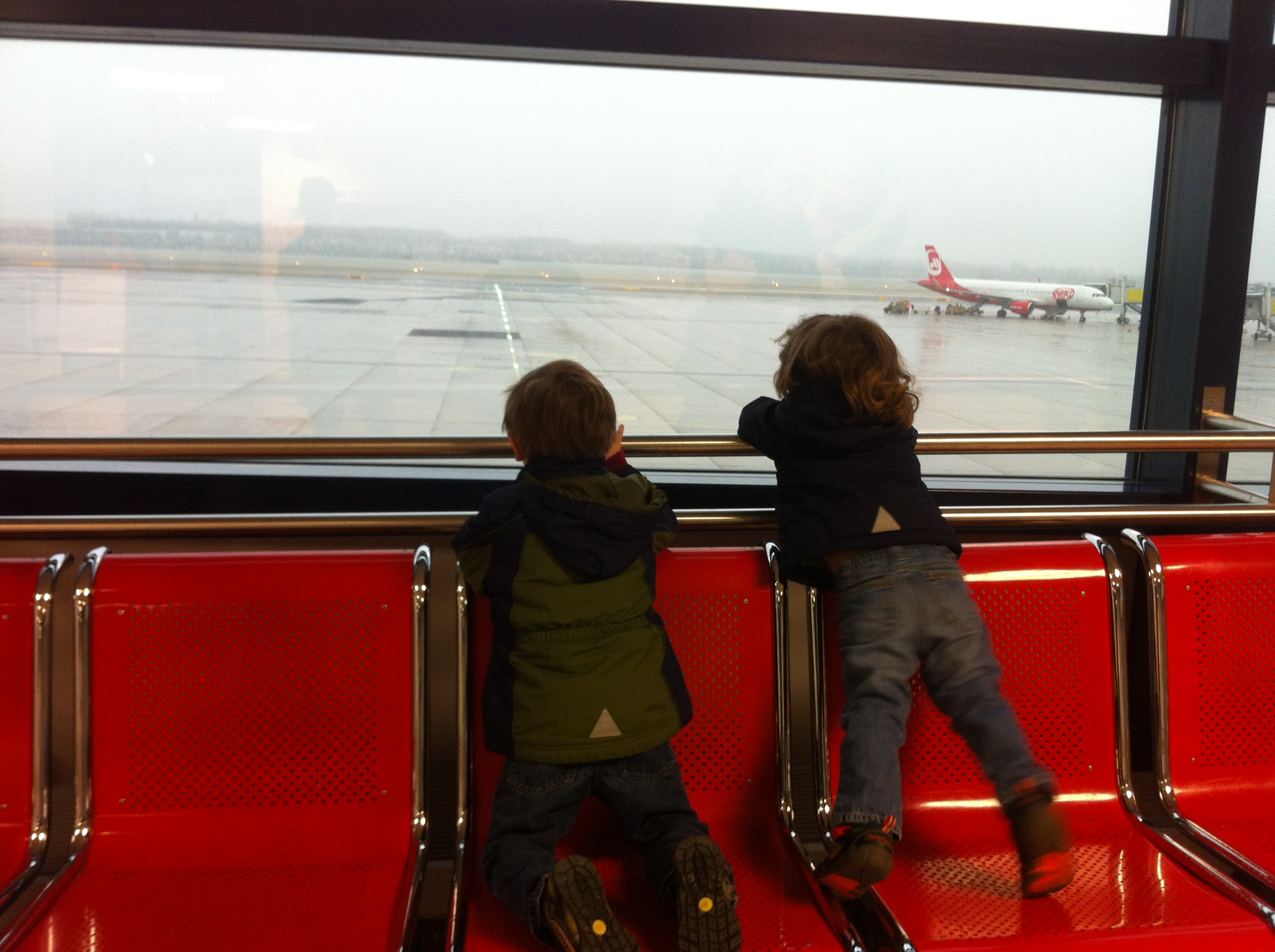 Before we even got underway on our trip to the US, we saw something at the Vienna airport that I’d never seen before (and wouldn’t even have thought possible).  While we were waiting in line to check our stroller at the oversize luggage line (we opted to check the stroller at check-in, since the boys were riding their Trunkis) we saw that the woman ahead of us was waiting to drop off … a Christmas tree!  Surely, you can’t check a Christmas tree as luggage?!?  But apparently, you can, because that’s just what she did.  The luggage guy did look a bit surprised, but he checked that it was tagged with a destination and accepted it.  Amazing!  Although I wish I had a) taken a picture, b) found out the destination (wouldn’t there be import restrictions on trees?) and c) been able to see how well it came out at the other end! 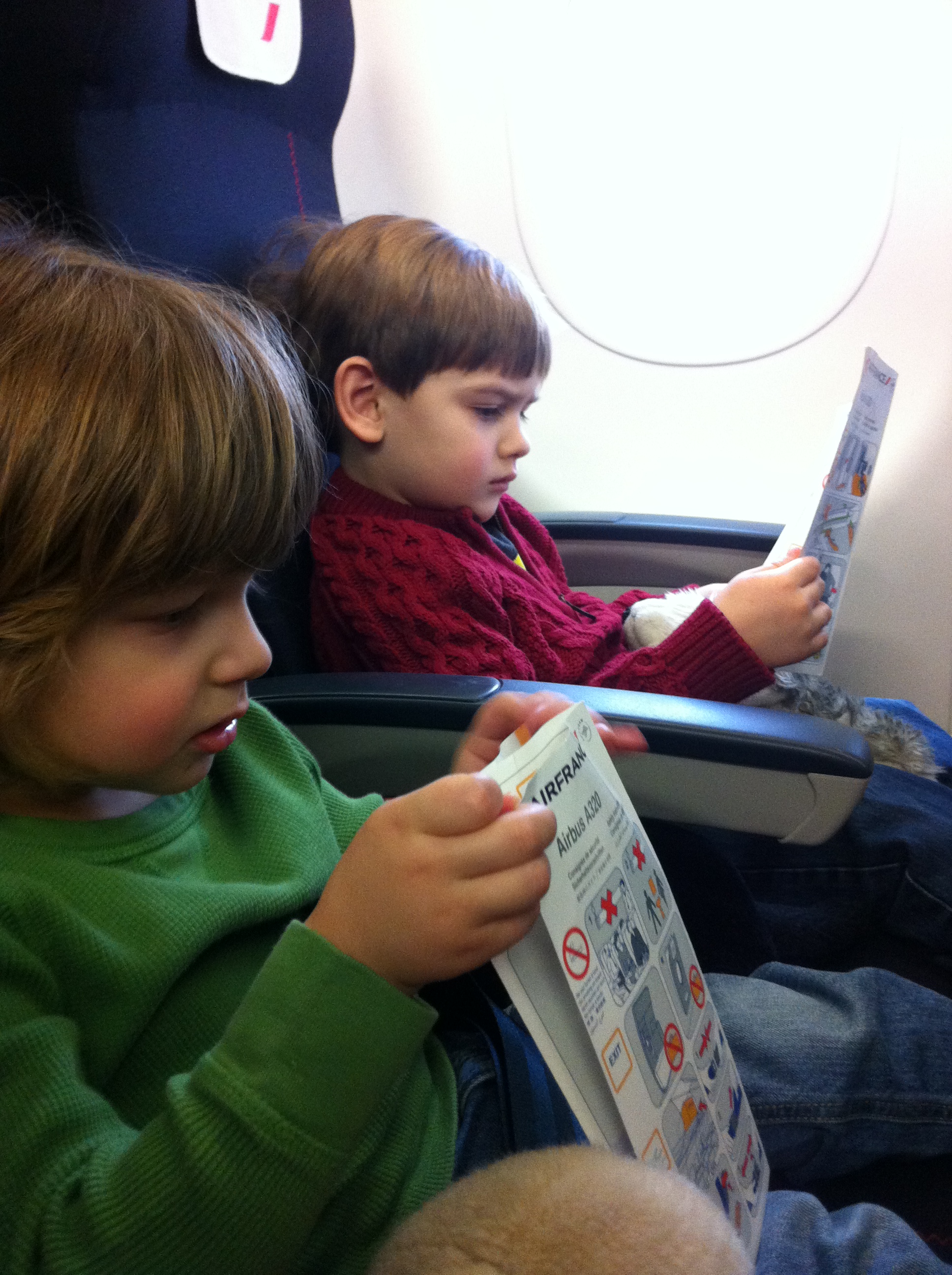 The first leg of our flight was delayed due to the inbound flight from Paris being delayed before departure, and then further delayed (once we were on board) due to de-icing.  All of which resulted in an eventual dash through Charles de Gaulle once we landed in order to make our connection.  I was quite certain our bags wouldn’t move as quickly as we had and that we would arrive in Washington without them.

Not to worry, though, because even after the lengthy boarding process for our plane, there was, evidently, a chip of paint off of the rudder which had to be inspected prior to departure, which resulted in us sitting on the plane, but not moving, for almost 2 hours. 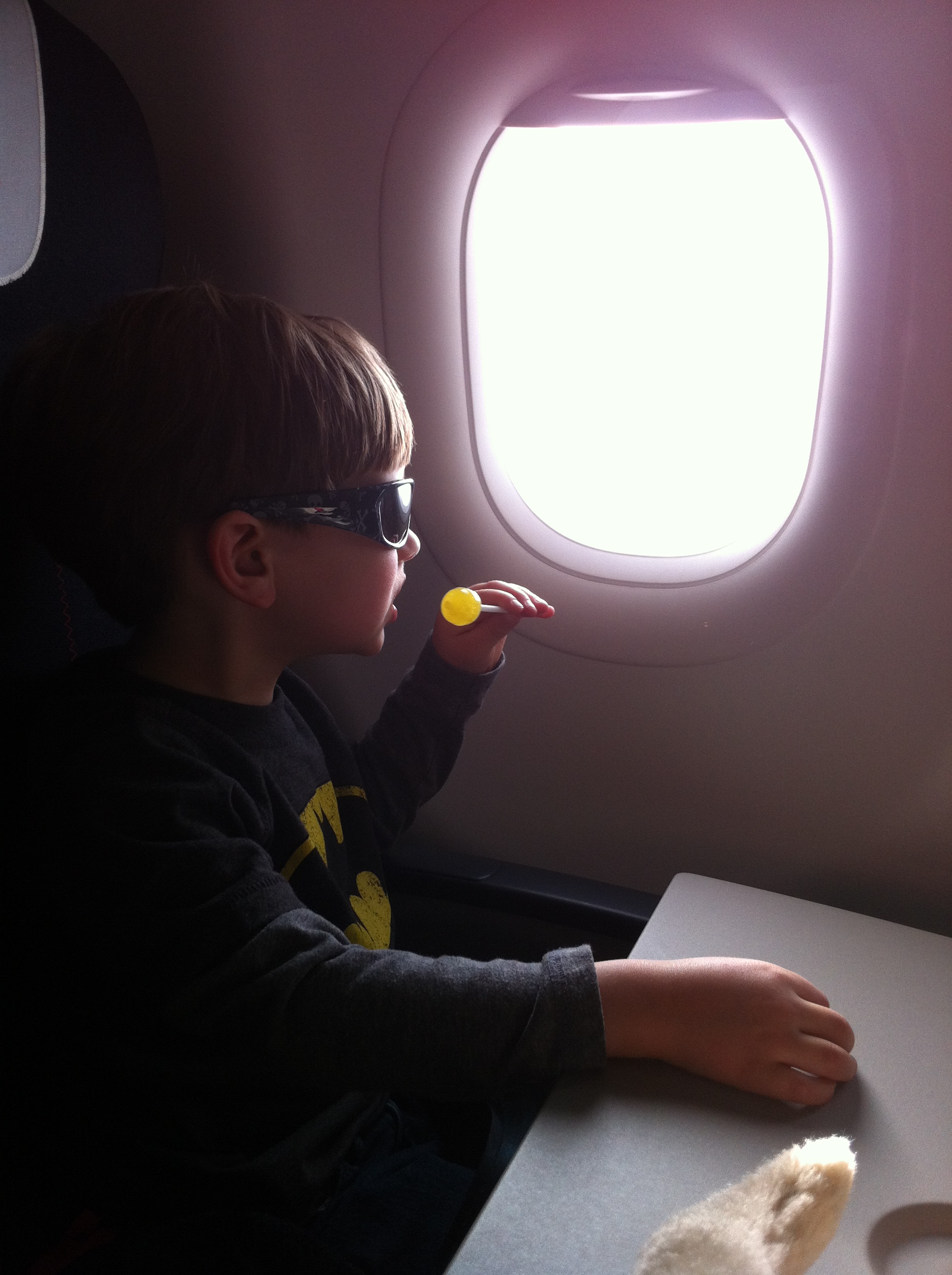 Although that’s always a bummer (although not as much of a bummer as it would be to fly in a plane that wasn’t working properly) we were stuck on the A380 with Air France and, as it turns out, it’s about the best plane it is possible to be stuck on.

Not only is the plane itself incomparably cool (it’s a double-decker with a spiral staircase in back, and each seat has its own on-demand entertainment system) but Air France made it as comfortable as possible by handing out the headphones early and providing snacks.  We had games to play and movies and TV shows to watch PLUS we could have charged our iPhones and iPad at our seat if we’d needed to — all of which was a recipe for happy kids (and thus, happy parents) during the delay. 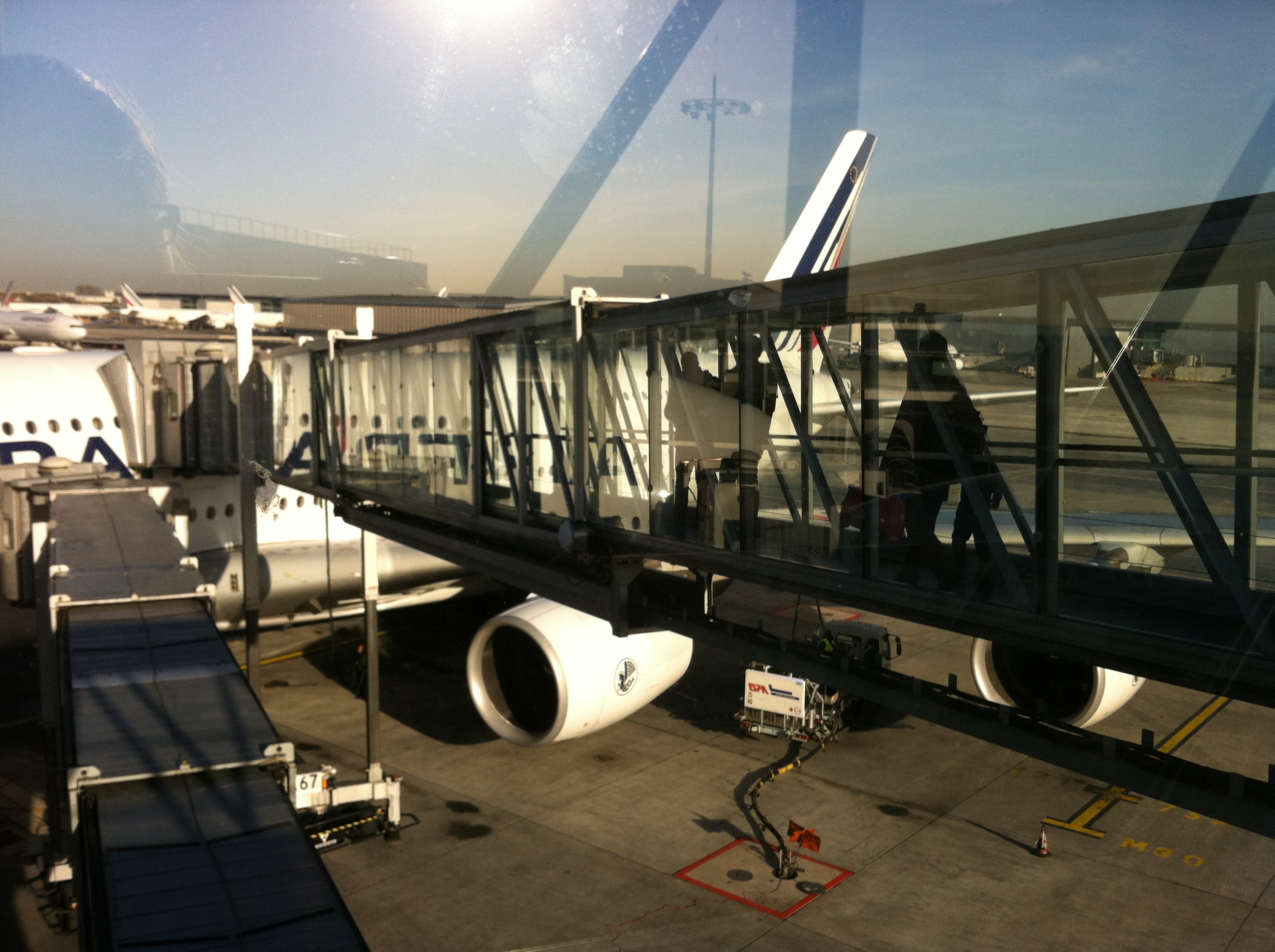 Once we got on our way, flying on the A380 was a little weird.  It’s so big that rolling down the runway for takeoff, it felt impossible that we would ever get going fast enough to get off the ground.  And then, when it was finally flying, it was surprisingly quiet for something so big. 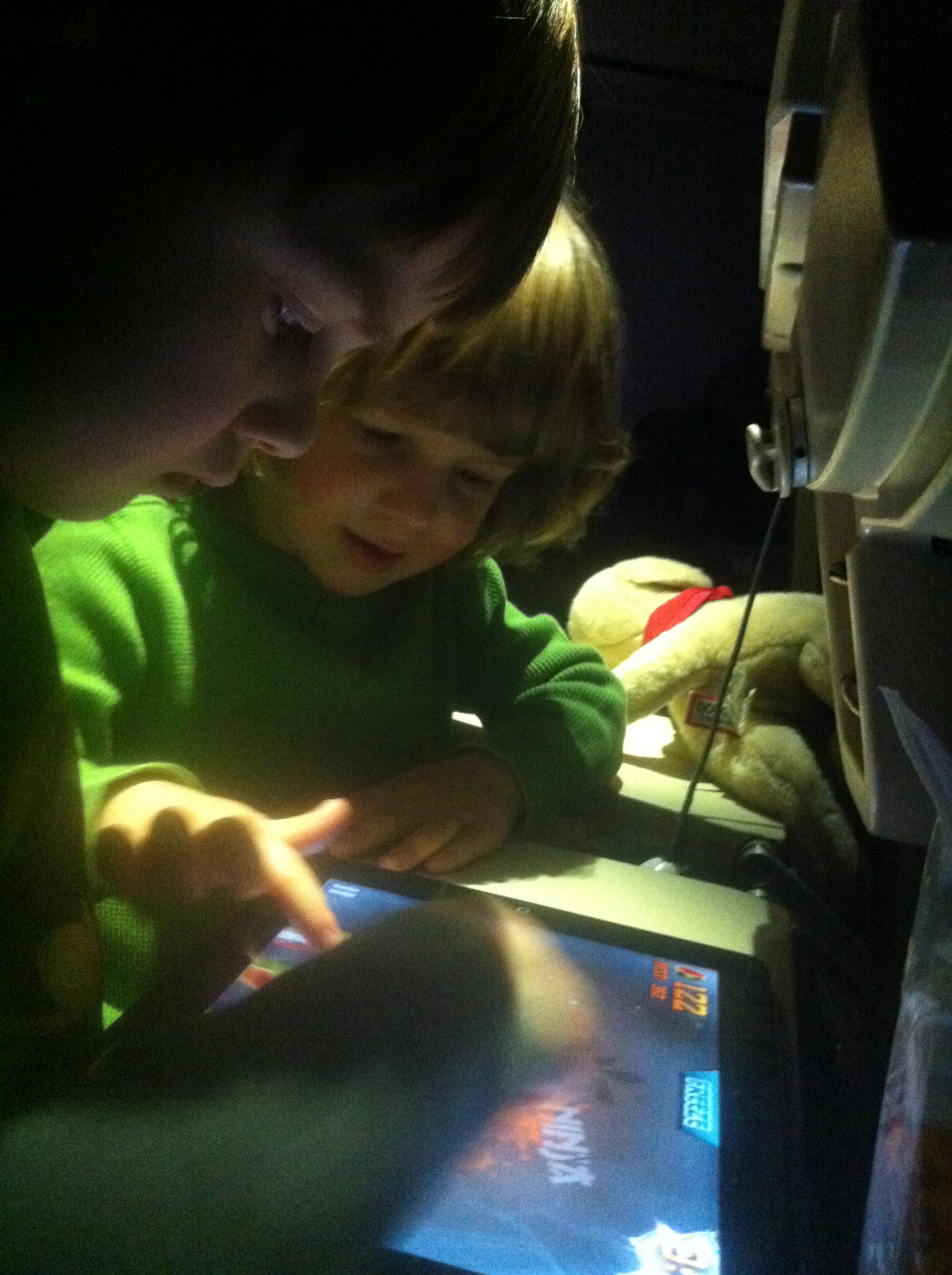 The trip went very well, and the kids were great.  Any worry I had about how they would do was unwarranted.  They were amazingly patient, got along well together, and behaved beautifully.  Liam had a bit of a crying spell after waking up from a nap (actually, he woke up because we were landing and had to be moved out of Dan’s lap, where he was quite comfortable, into his own seat, which he objected to), but I could hardly blame him for that.  (After all, he’s *3* and he just accomplished his 6th and 7th intercontinental journeys.  Pretty impressive, really.)  In the days leading up to the trip, we gave the kids 3 rules for flying.  We’ve said similar things before, but never quite so simply.  1. Whenever the seatbelt sign is on, you have to wear your seatbelt.  No exceptions.  2. No kicking the back of the seat in front of you.  3.  No yelling.  That was it.  We reminded them of these rules often in the week before the trip, and it really seemed to do the trick — all we had to do was remind them of the “airplane rules” and they remembered.  (Must not forget that for future trips . . . )

The flight was long, and the delays at the beginning took their toll on all of our patience in the last few hours.  We had a good journey, though, helped by comfy accommodations, the fascination the kids had with the in-flight moving map display (did 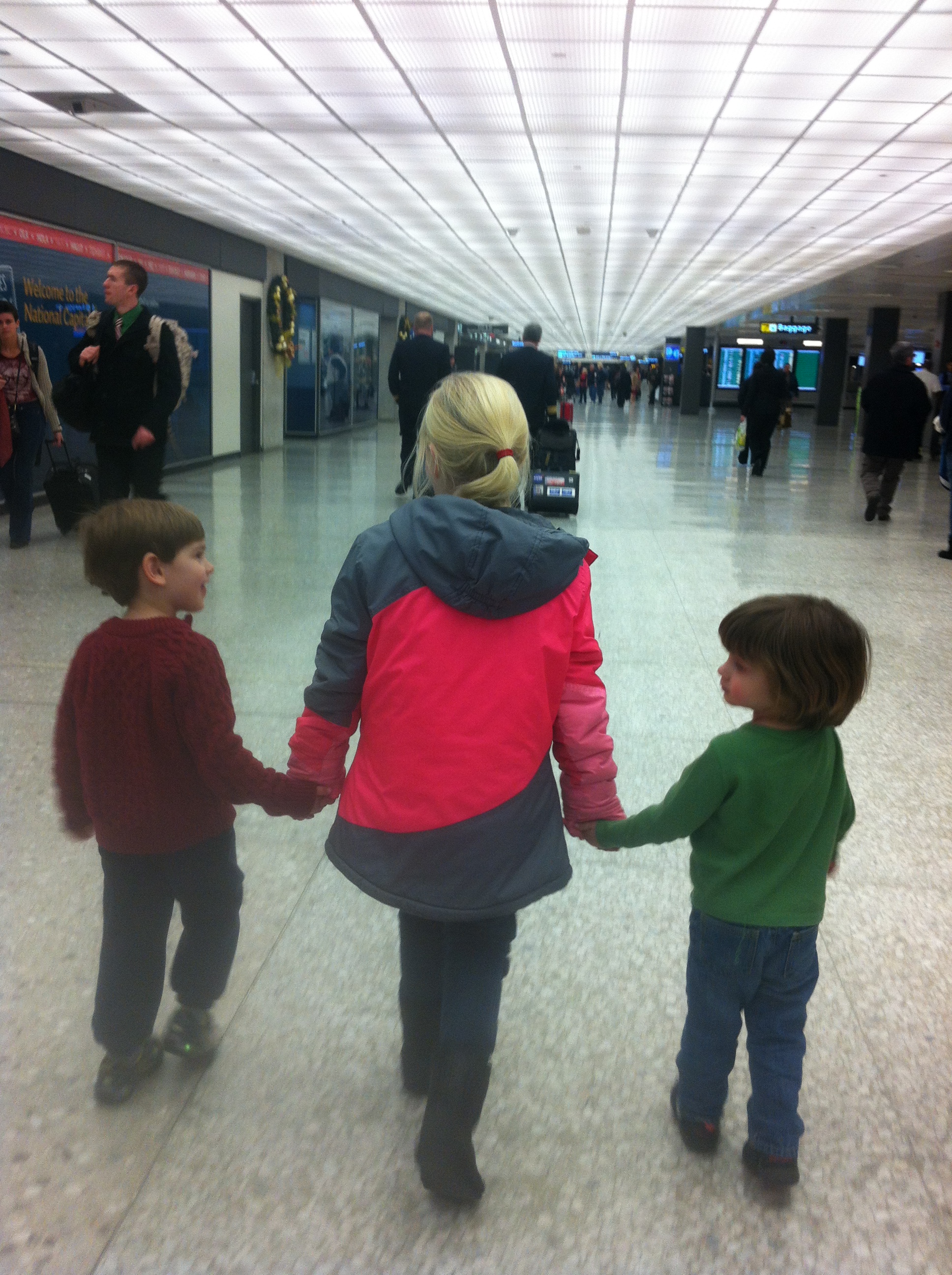 you know the outside air temperature at 39,000 feet is -86 F?), lots of electronic entertainment, a few coloring books and stories and many trips up and down the spiral staircase.  It was a really pleasant flight.  (And I would definitely recommend everything about flying Air France — I wish we’d tried it sooner.)

After a LONG day of travel (over 18 hours, counting the delays and the car travel) and a seemingly endless line at Customs, we were reunited with our family, many of whom we had not seen in over a year and a half.  It made every moment in the air more than worth it.  It was so very good to see them, and so good to be home for the holidays. 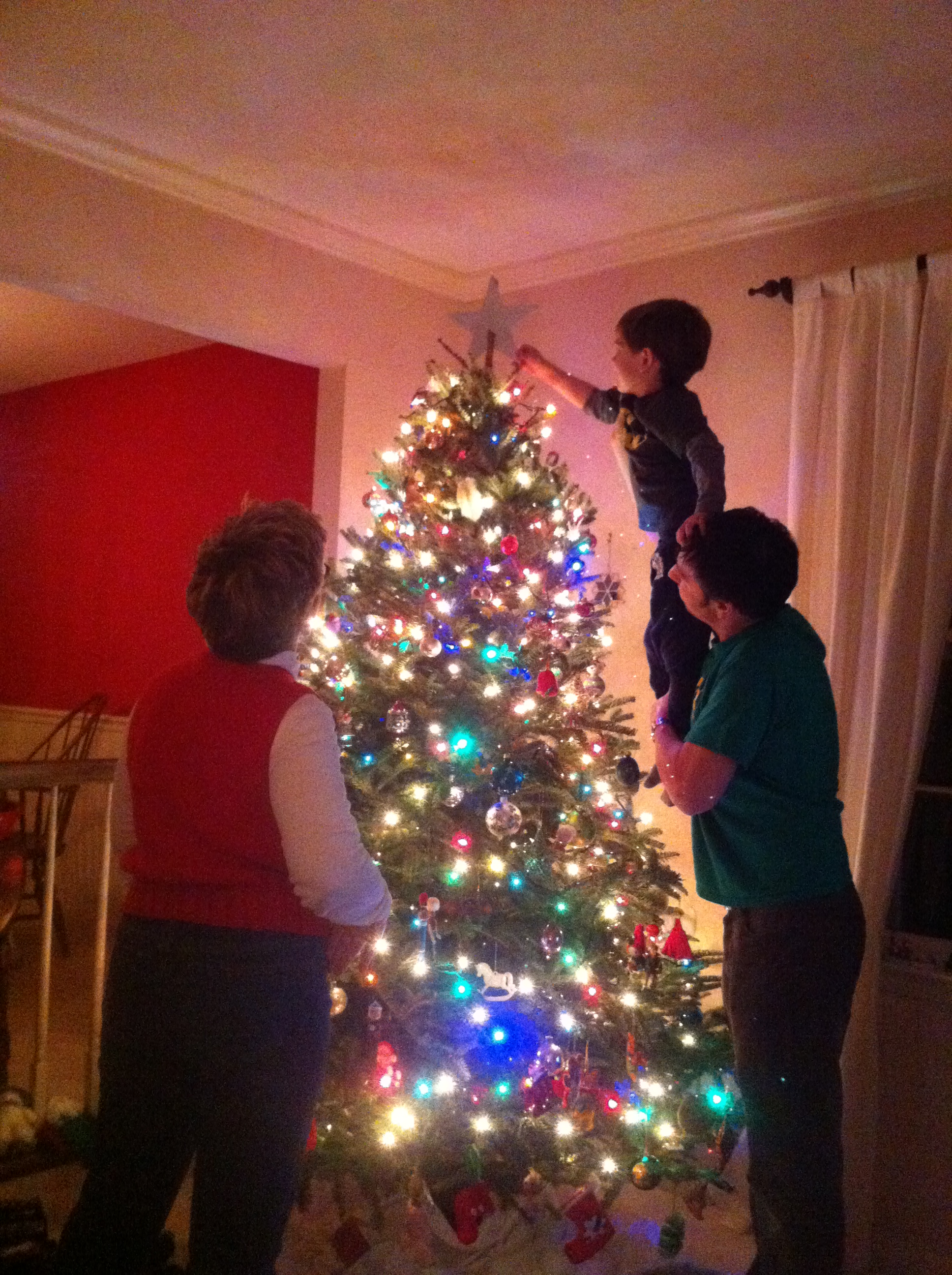