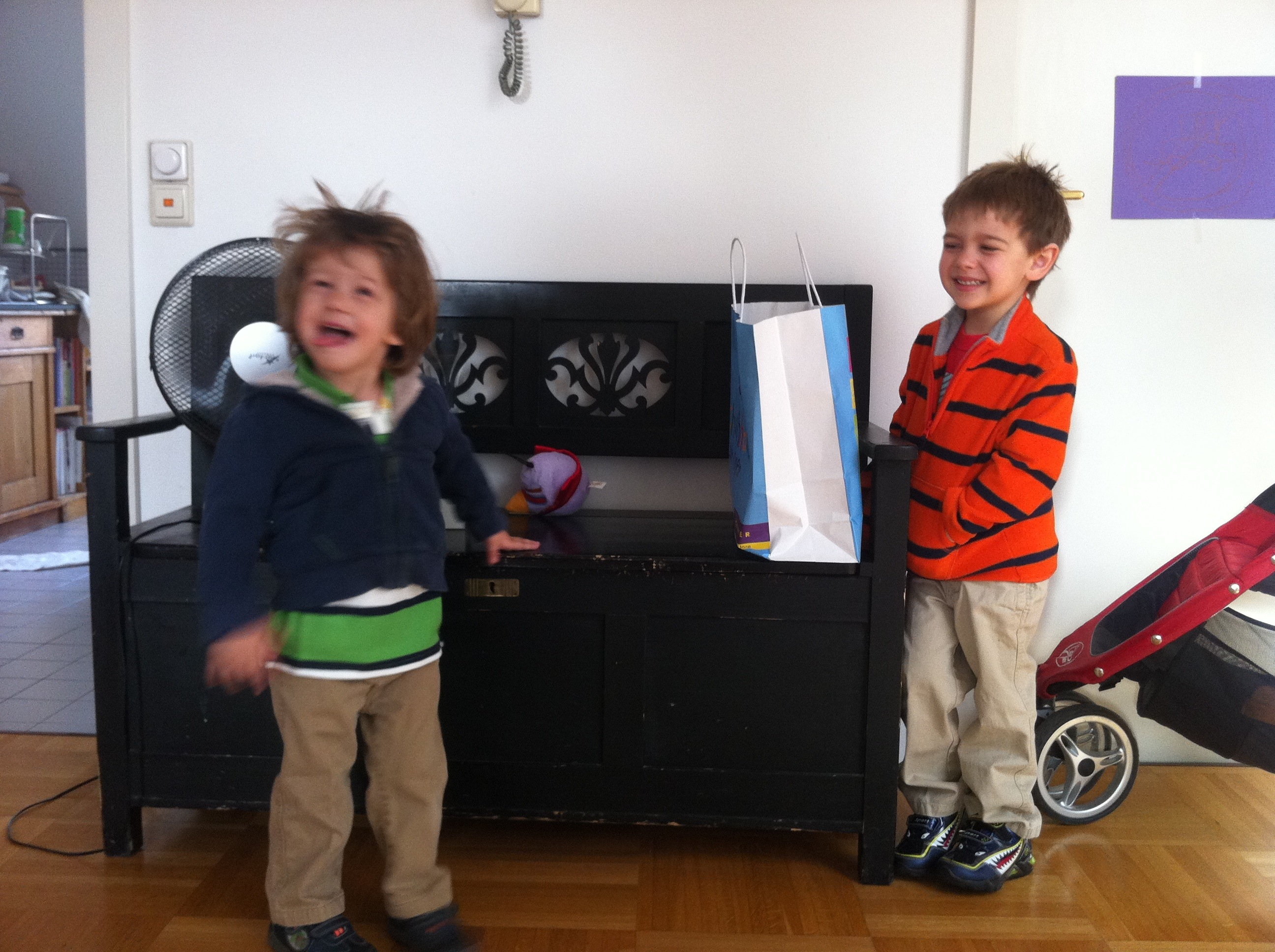 Today was the big day — Liam’s first day of preschool (“Kindergarten” in German) and B’s first day of kindergarten (“Vorschule” in German)!  They’ve both been so excited for the past few days, and they woke up with enthusiasm this morning, too — B exclaimed, “It’s the first day of school!” as soon as he woke up this morning, and Liam, after scowling at him groggily for a moment, asked, “Do I get to go to school too?” followed by “Yay!” when we were finally able to answer yes. 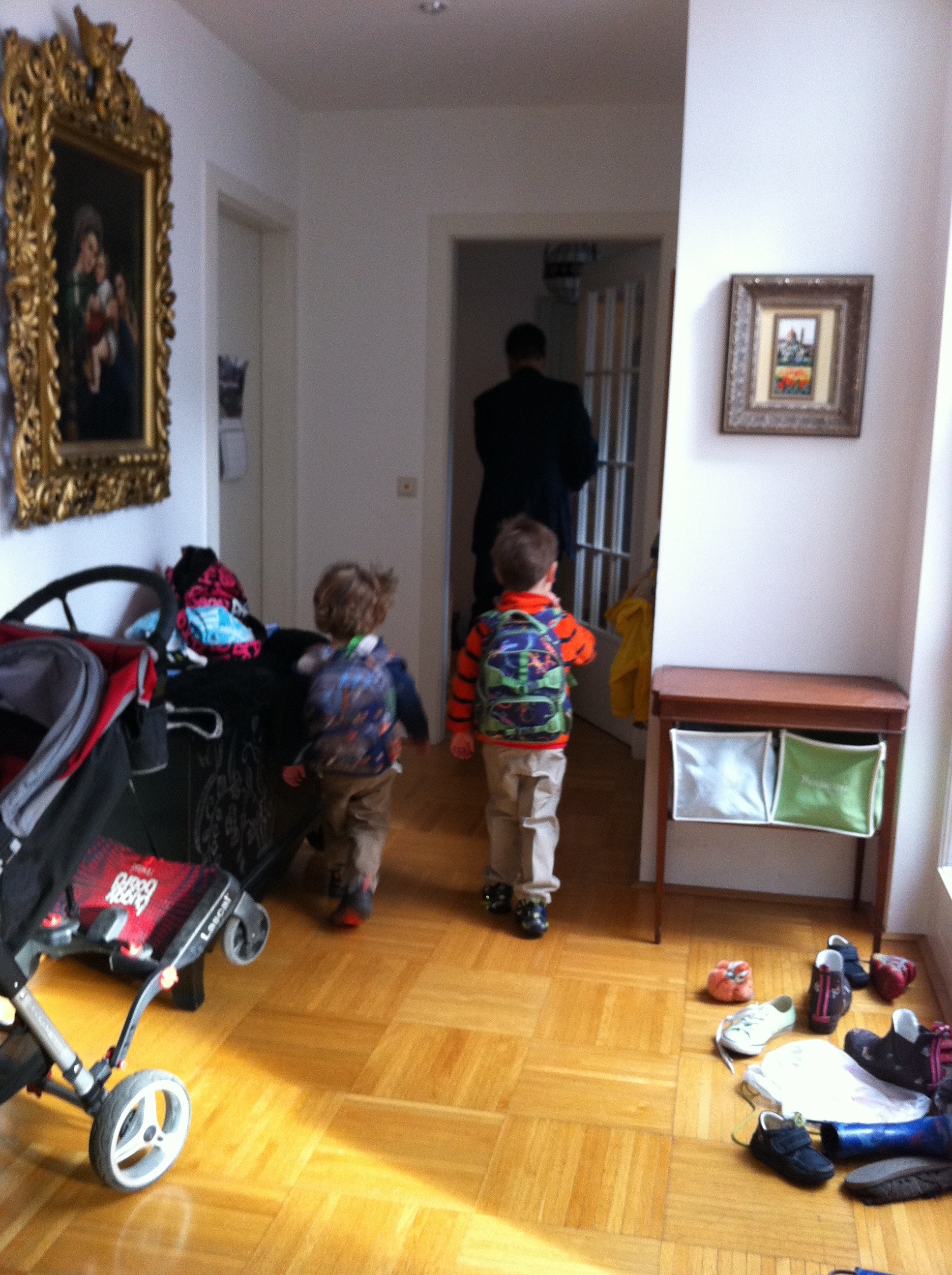 After a whirlwind of morning preparations, and a failed attempt at non-blurry pictures, we were out the door and on our way.  As soon as we stepped off the bus at the correct stop, B announced, “Liam, we’re at your school!” even though we couldn’t see it yet (he repeated the announcement once we actually could see the building).

They were so excited to be there together.  B wanted to walk Liam to class, but he was so anxious to get to his own class that, after a quick glimpse at Liam’s classroom door, B was ready to get to his own class and we all went to drop B off at class first.  B was so happy to be there.  He gave his teacher a gigantic hug and then ran off to play with just a quick hug for me before he was off. 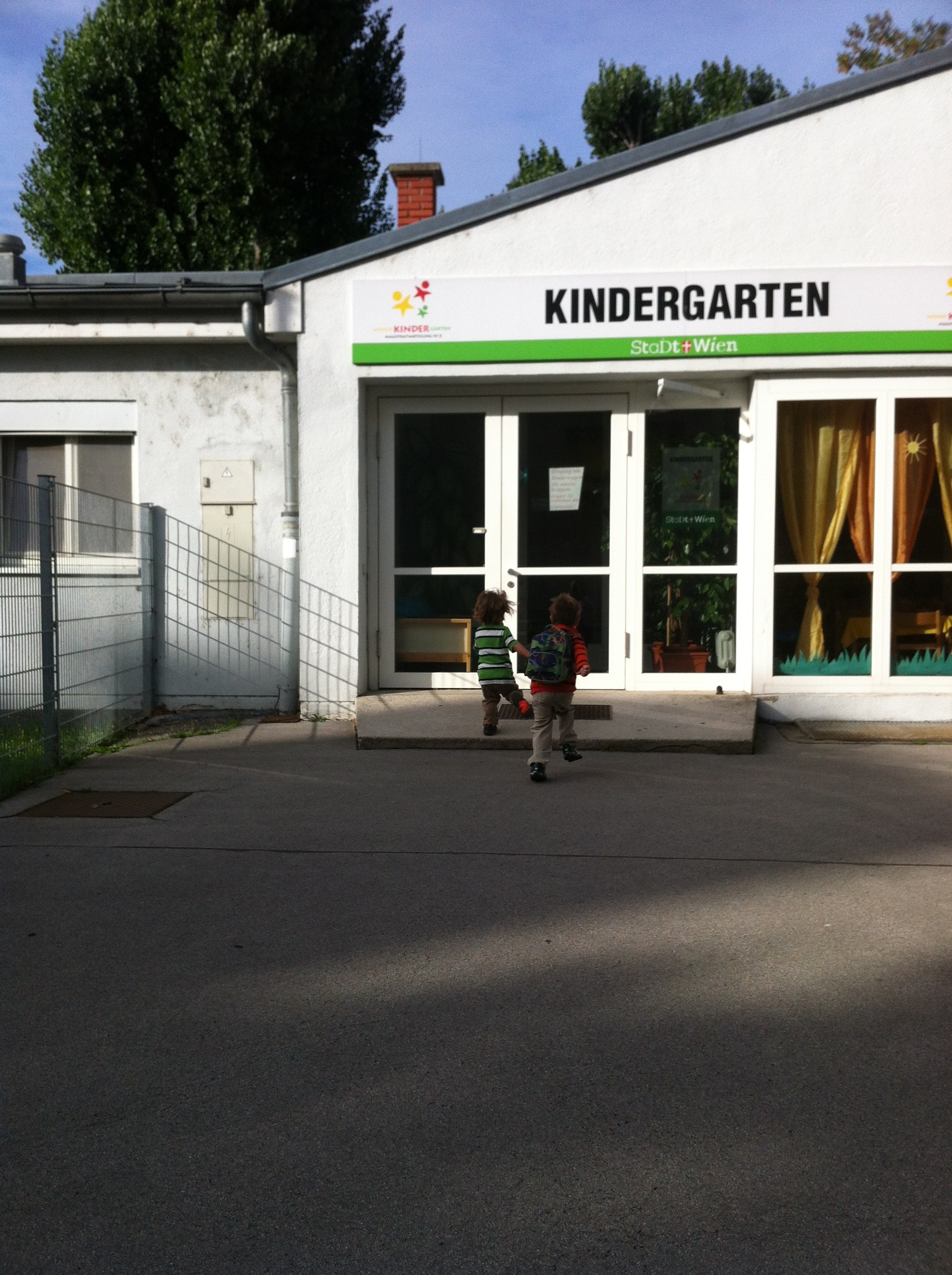 Liam was just as enthusiastic.  He greeted his teacher with a “Guten Morgen!” and shook her hand (we’ve been practicing), and then he changed his shoes and hung up his coat and backpack.  He was so happy.  He jumped right into playing with cars, then trains, then Legos, then balls.  He played happily with the other children (although he had no idea what to do when someone took a toy he was playing with) and even announced to a little girl, after they’d been playing together for a while, “You’re a friend!” 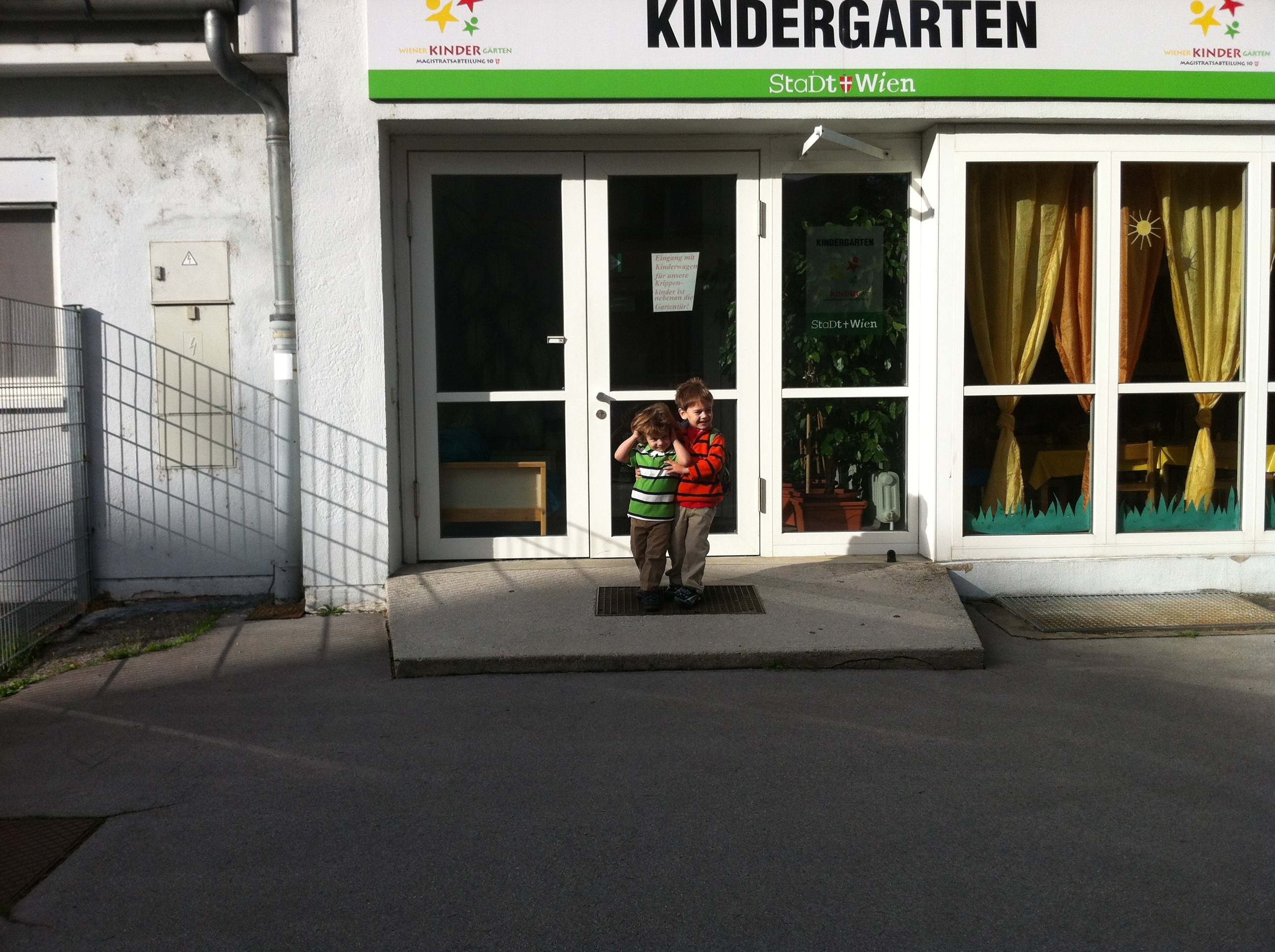 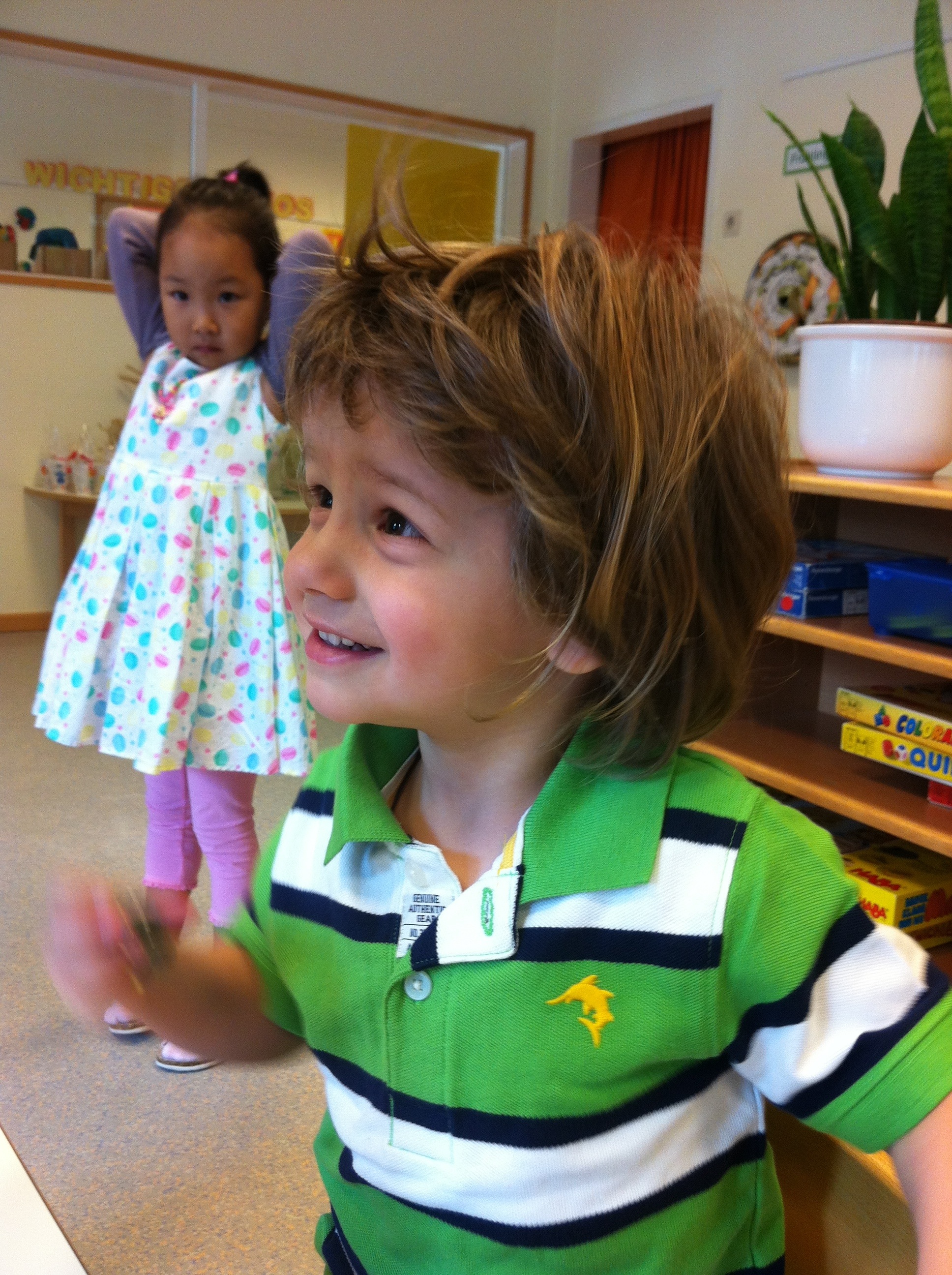 I think he’ll do great.  In addition to making a new friend, we discovered that there are at least 2 other English-speaking kids in his class (one of whom is B’s best friend’s little brother) so that should help.  After playing for an hour or so, Liam told me, “I love playing at school!”  I’m so glad that he does.

We only stayed for about an hour, and I stayed with him the whole time (just for today).  But when it was time to go, he didn’t want to leave.  He can’t wait to go back tomorrow.  His teacher gave him a little gift in honor of his first day, and he carried it home himself. 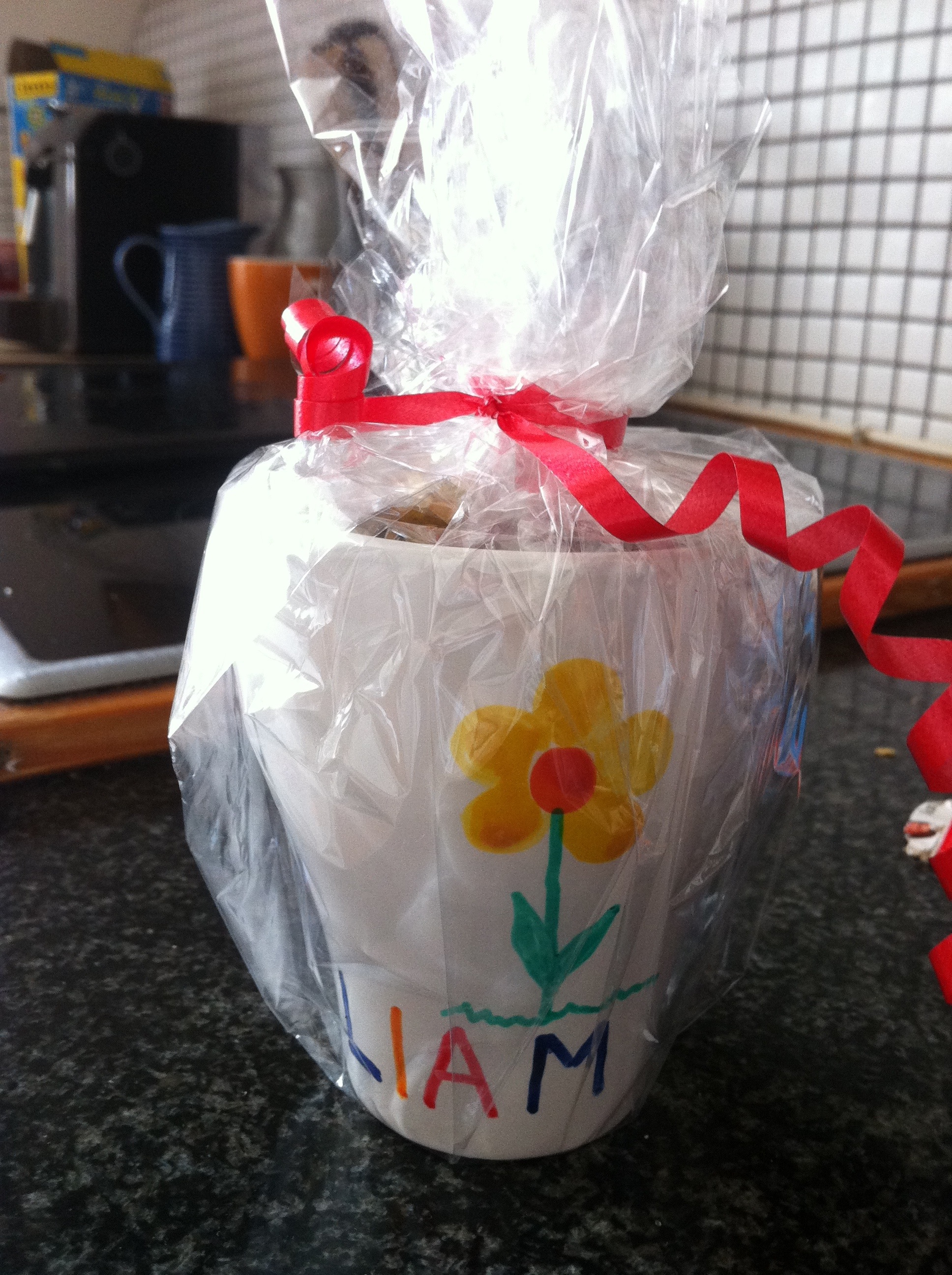 And B is in Vorschule now! He was so excited to get to play with some of the toys set aside for the bigger kids — he got to play with two of the Vorschule toys today (although, when I asked, he couldn’t remember which ones they were).  He was so happy to see his friends and teachers again, and to get to play outside.  He looked for Liam in the garden, but we’d already left by then.  They’ll get a chance to play together soon.

Tomorrow, if all goes well, Liam and I will stay and play for an hour, and then, if he’s still happy, I’ll go away for a short bit before coming back to get him.  We shall see how things progress.  But, for today, I have two very happy, grown up boys.  It was a great first day!

2 thoughts on “First day of school”