Every year, the Vienna Philharmonic Orchestra puts on an outdoor concert on the grounds of the Schönbrunn Palace here in Vienna.  The concert is recorded and rebroadcast in the US (and perhaps elsewhere) later in the summer, but it actually takes place in May.  (As a result, every summer we get calls and emails from friends and family asking if we are going to a concert that actually happened months earlier.)  It’s a free event, but due to busy schedules, sick kids, and inertia, we’d never been before.  This year, we made the trip out to Schönbrunn to see it. 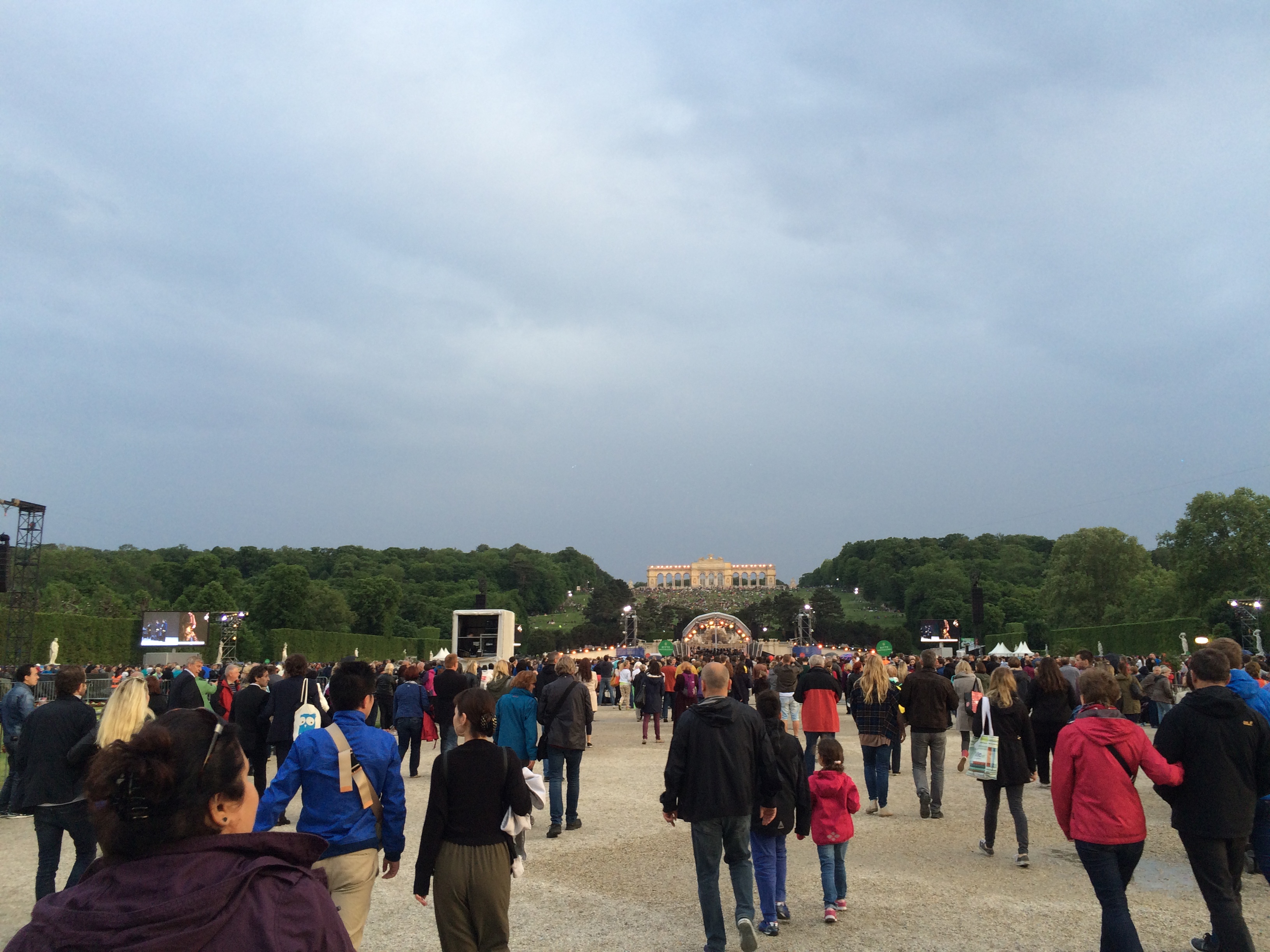 Weather-wise, we may have chosen the worst year of our time here to finally go.  It was raining, and though we hoped that the drizzle might hold back the crowds, there were lots of people in attendance (though, since we’d never been before, it’s possible that it WAS significantly less crowded than it would have been in great weather).  When we arrived, we got to walk through and under the palace to enter the grounds (a passage I’d never seen open before), and out into the gardens, which were fenced off and organized to corral the people and protect the flowers.  There was no chance of getting a spot (standing only) anywhere near the orchestra, so, after a bit of wandering, we took a position with a good view of one of the tv screens showing the action (the point being to hear the music, anyway).  The Gloriette was lit by colored lights, and the atmosphere among the crowd was happy and relaxed, excited for the concert. 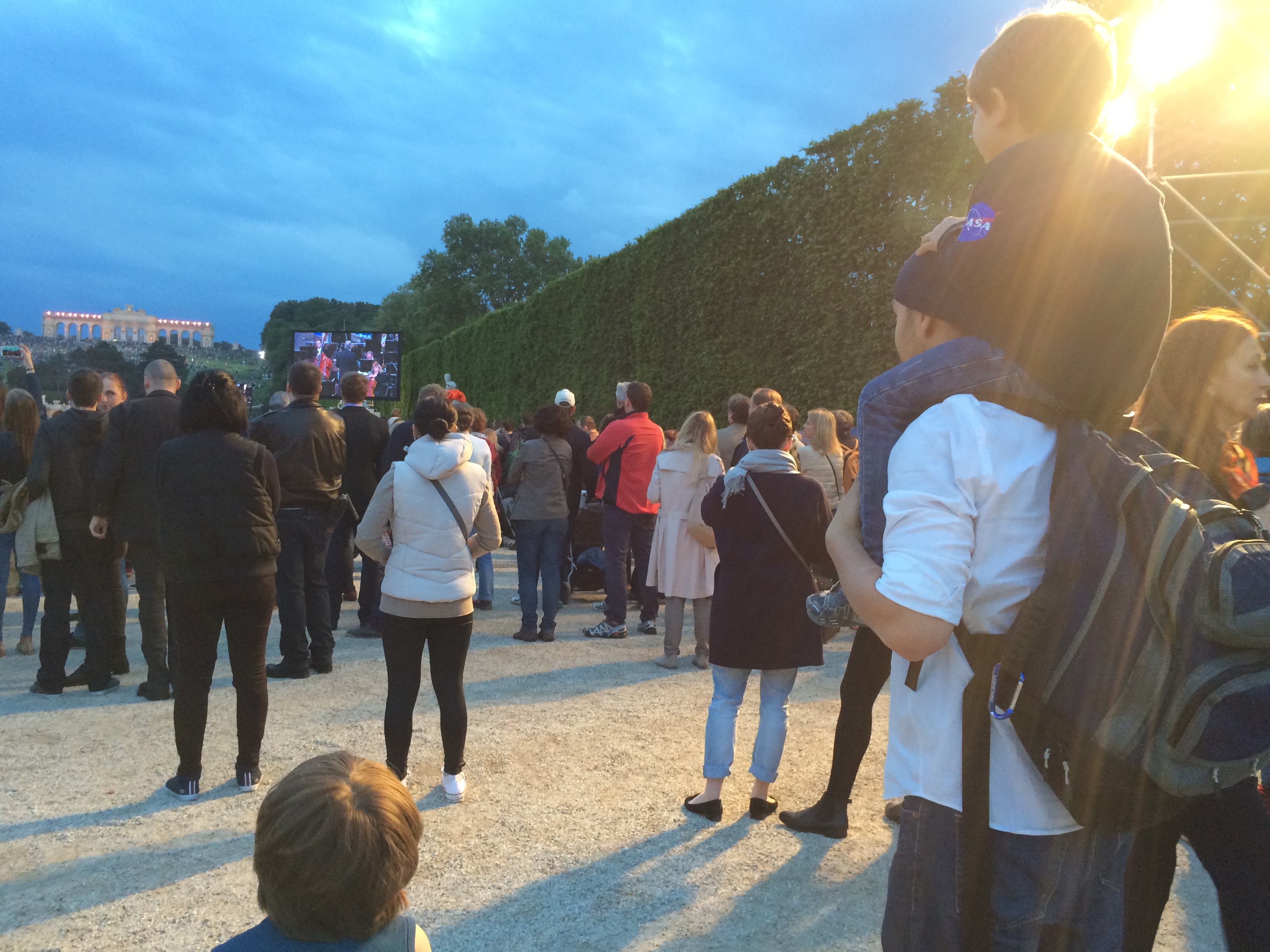 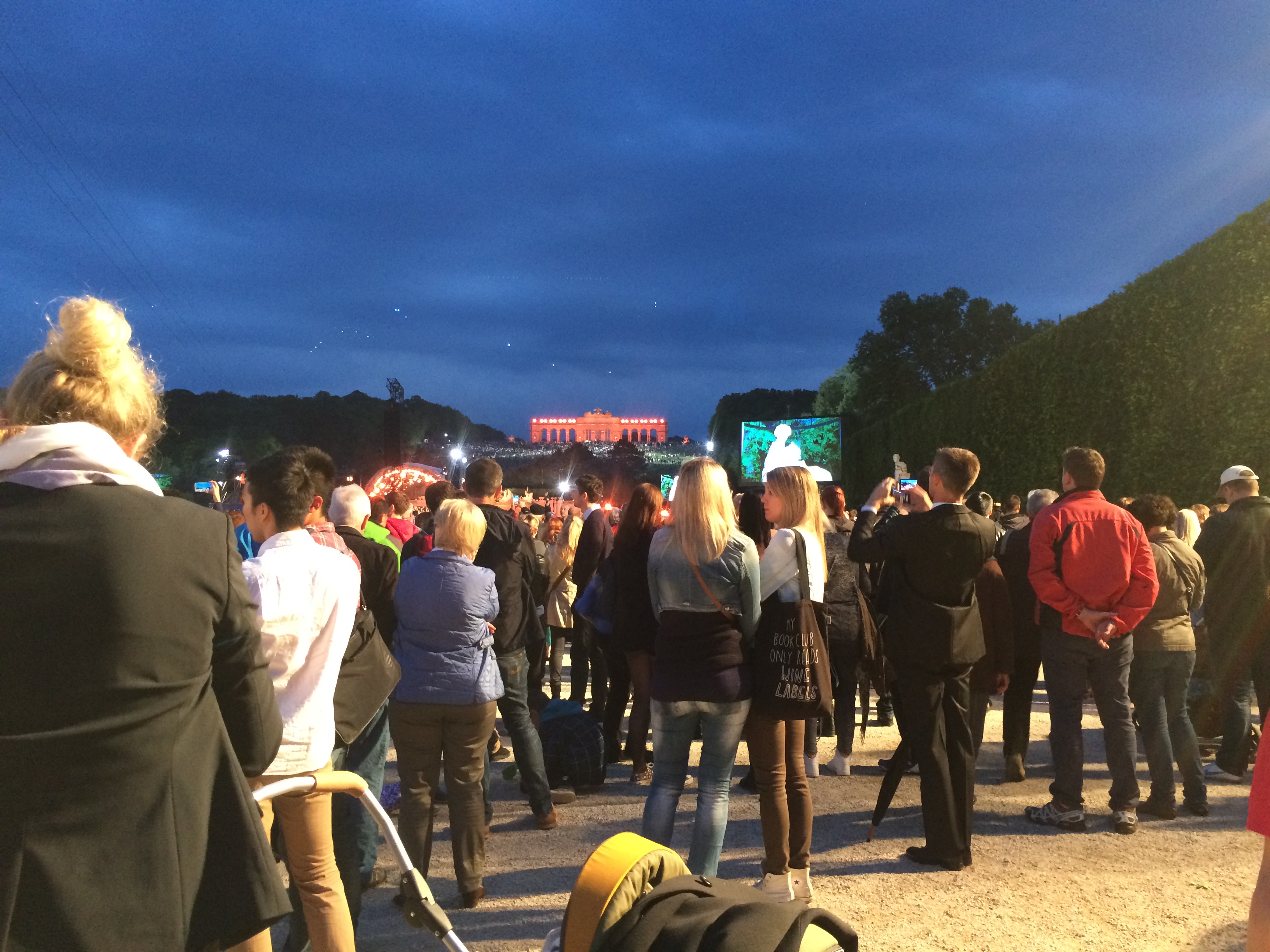 And it was lovely.  The music was fantastic and the setting absolutely stunning.  It was fun to be out for the evening, even in spite of the rain, and the kids enjoyed themselves more than we had expected.  It started relatively late (for us), so we knew we wouldn’t be able to stay for the whole thing, but the boys happily stayed for over an hour of classical music, which was pretty impressive.  They danced and clapped and ran around as much as the crowds allowed.  After about an hour, the boys were getting antsy, and we were all getting a little stiff-legged from standing/holding kids, so we decided to call it a night.  Rather than fight our way back out through the crowds, the way we came in, we opted for a side exit, through the gardens and out towards the zoo.

And that was the most magical part of the night.  We could still hear the music from the concert, but, as we walked through the trees, we were mostly in darkness.  There were spotlights among the trees, which gave us some guidance, and a steady flow of other people also leaving the show, but we were mostly on our own in the warm, summer darkness, in the gardens of Schönbrunn Palace.  We let the boys run ahead, warned them to watch out for puddles and for other people, and listened as their laughter came back to us as they ran and leapt through the gardens.  It was so joyful, so peaceful and so beautiful, I could have stayed there forever.  It was an absolutely perfect summer night, in an improbable place, with my most favorite people.  It was like a dream.  I imagine that if my boys remember it, it will be the kind of memory that seems like it wasn’t actually ever real.  I doubt I will ever forget it.