I don’t remember the process of being told I needed glasses, so I have no idea how I reacted to it.  I know that since then, I’ve been frustrated by it — often.  I’m not lucky enough to only need them when I read, or just when I’m tired.  In theory, I ought to have worn them every waking moment since I was 4.  (I haven’t though — I never wore them while riding or dancing, and I took a nearly complete hiatus from them in middle school, high school and college.)  I don’t like wearing my glasses, but I do like being able to see.  Since becoming a mom, I’ve succumbed to the practicality and worn them daily, pretty much all the time.  I’m used to them now, but I’ve never enjoyed them.

Needless to say, I’d been holding out hope that my kids might escape that particular curse.  So far, I hadn’t seen anything to indicate any vision trouble in either of the boys — ever since they could talk, I’ve been asking them if they can see things at long distances away, with no trouble.  But a routine vision screening this fall turned up something I never expected — Benjamin is a little bit farsighted.  (I never thought to check for that, and it was unlikely to show up before he started reading, which also happened this fall.)

The process of having his eye exam done was absolutely horrible.  The first part was ok, when he just had to look through lenses to get a sense of what helped, but having his eyes dilated, followed by having a light shone into them, has to have been one of his least favorite experiences — EVER.  But, we got it done, got his prescription, and went to investigate purchasing glasses.

That was a bit of a challenge.  When I was a kid, and tried to pick out glasses, I vaguely remember having a tough time making a choice.  I couldn’t ever find something I really liked.  B was the opposite.  He knew EXACTLY what he wanted (maybe a positive by-product of having so many glasses-wearing family members), but most of the options they had in the style he wanted were too big for him, and the sales guy was really pushing for a different style altogether.  Finally, the sales guy walked off to help someone else, and B and I were left with some time to experiment on our own (again, I’m a little grateful for my decades of relevant experience).  Finally, he reached a decision, and I think it was a great choice. 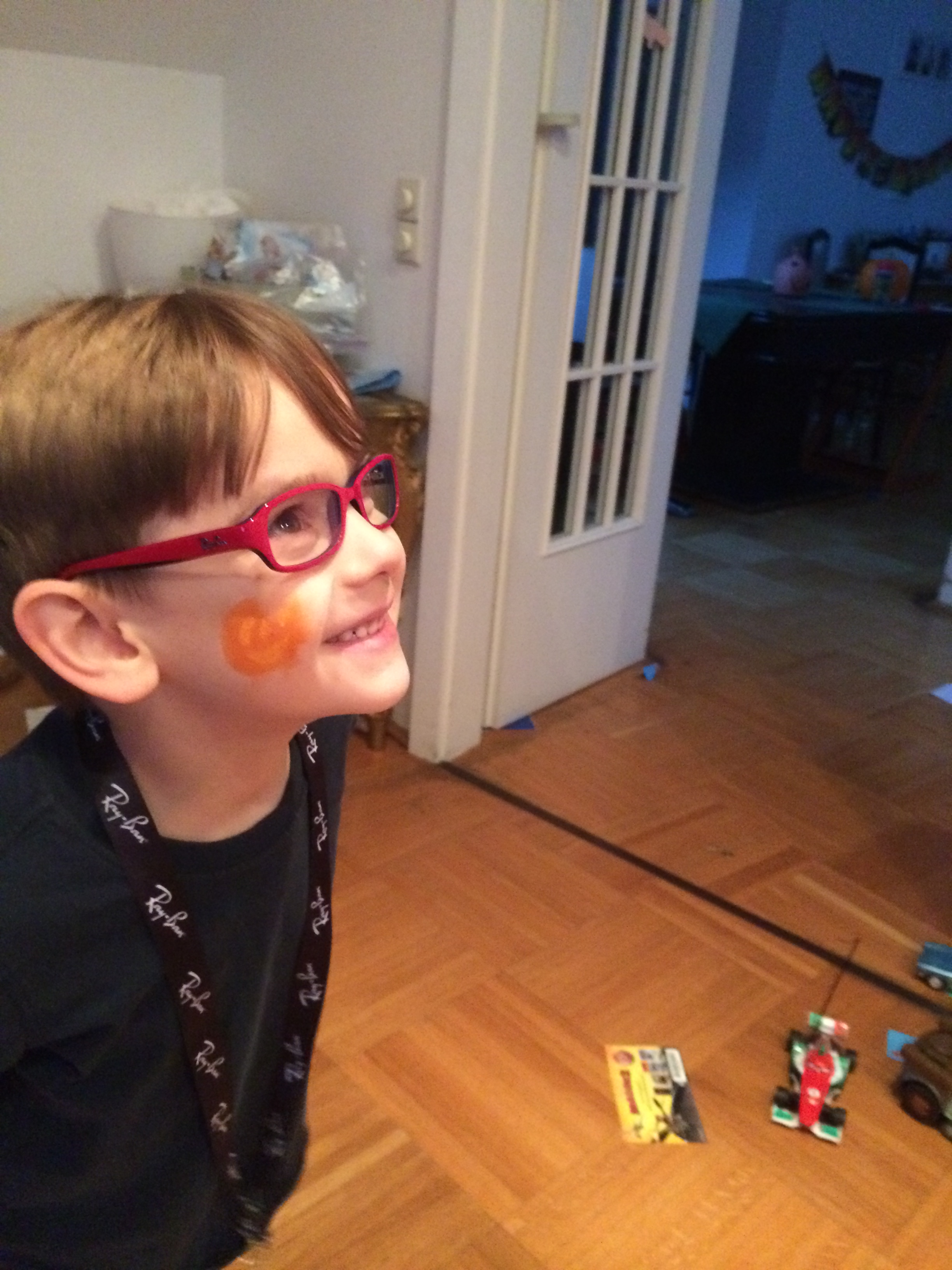 Even though he acknowledges that they’re cool (and I agree), he’s a lot like me — he doesn’t like his glasses, and it’s been tough getting him to wear them with any consistency.  He only needs them for “up close work”, but that’s a lot of what they do in elementary school — reading, writing, computer work, art.  He avoids using them, though — and because he doesn’t have to wear them all the time, he gets away with “forgetting” to put them on.  Given my history, I’m entirely sympathetic, and therefore I don’t push it as much as I probably should. He also says that they don’t really help him. It’s possible that’s really true — his farsightedness is minor, and it has to be tough to get a kid’s prescription right — but it’s also possible that he just doesn’t want to wear them, just like me. 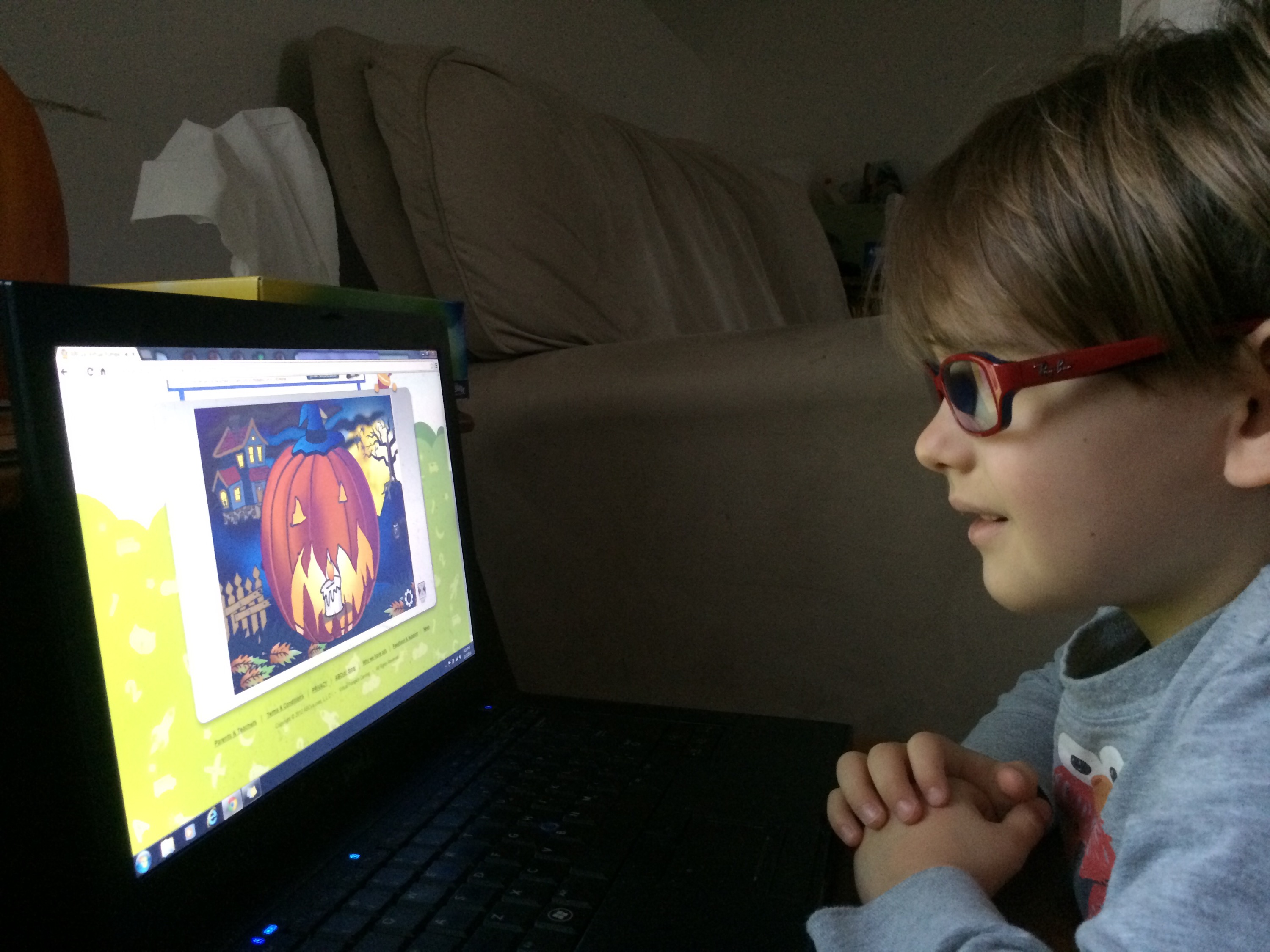