He was so excited last night that I was worried he wouldn’t be able sleep.  But he was so worn out from the thrill of his orientation yesterday that it wasn’t an issue — he was out almost as soon as his head hit the pillow.  First thing this morning, he was up with a big smile, and the first thing he said was, “Today is the big day!”  Which was shortly followed by, “It’s going to be awesome today!”

He did so great getting ready this morning.  We had breakfast, watched a little tv, and got dressed for school.  Inside, I was freaking out, but I did my best to stay calm — I didn’t want to mess up his cheerful enthusiasm.  He was so excited and so proud!  And I was so excited and proud for him. 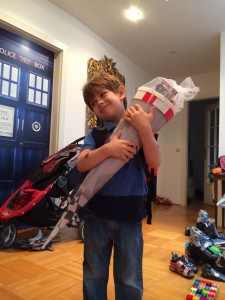 But then, I tried to get a good “first day of school” picture.  He was too excited to stand still, and then Liam saw the Scultüte we were about to give to B sitting on the bench, which led to more excitement on B’s part and tears from Liam (despite reassurances that Liam’s Schultüte will be ready for him on his first day, which is next week).  Dan was consoling Liam and B was bouncing around with his Schultüte and it was getting later by the minute and I just wanted one non-blurry, no tears picture where he was actually smiling before they had to leave for school … and I got a little grouchy trying to get it.  (Which I instantly regretted, because REALLY?!?  Much as the pictures are cute, the first day of school is NOT about getting a great picture.  Great job, me.  Sigh.)  And I felt pretty much like a crappy mom at that point. 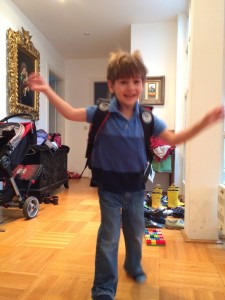 But he was still in good spirits, and after lots of hugs and kisses, he and Dan were out the door and on their way.  And I channeled all of my certainty that I am an awful mom who just ruined my boy’s first day into a big ball of heartache and spent the next half an hour sobbing while Liam played on the iPad and looked at me warily out of the corner of his eye.

I wasn’t just crying just for screwing up this morning by being worried about the wrong part of the first day, but for every misstep and fumbled opportunity I’ve had in the past 6 years, 1 month and 7 days.  I was crying for every time that I’ve snapped at B because we were late, or been impatient with a question, or been short-tempered because there was something I was trying to get done.  There have been so many times that I’ve lost sight of the big picture and gotten frustrated or overwhelmed by unimportant details.  And I was crying, 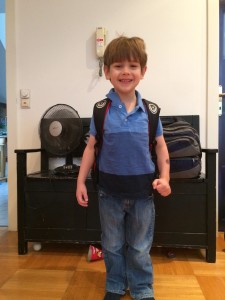 truly, because those are all moments that I can’t get back.  In fact, I can’t get any of them back — the good moments or the bad ones.  Seeing my little guy head off to school this morning was an awesome reminder of how precious ALL of those moments are.  I was overwhelmed by how quickly the time passes, and by how many things that don’t matter end up getting in the way of what really, truly does.

My half hour of regret and self-pity finished, as these things so often do, with desperate prayer (and with writing, because that’s how I exorcise these things).  Please, God, help me to be a better mother.  And, God, please just take care of my baby.  I don’t actually care about anything else.

And then Liam and I had a lovely morning together.  We played and went to the park, we had lunch and he took a nap.  And the whole day, B has been on my mind.  I do wish I’d kept my perspective this morning and had a more positive attitude, but … I didn’t.  And while he’ll never have another first day of first grade, there will be many other firsts, and many other chances for me to keep my focus on the truly important things.

B’s still at school, so I don’t yet know how his day has gone, but I can almost guarantee that it WAS awesome today.  I know he was awesome.  And my day will be super awesome when I get to give him a great big hug.