I’ve never heard anything like it.  There was a loud pop and the shatter of breaking glass, a moment of stillness, and then a second, floor-shaking, monumental crash that followed.  I had no idea what it was, but I didn’t look around.  We were all in the living room.  I ran to the kids and wrapped them in my arms.  Whatever it had been, they were safer right where they were than anywhere else.

As it turns out, the massive, gilt-wood framed mirror that hung in our dining room had fallen.  There was glass everywhere.  Our dining room floor was covered in jagged tiny pieces.  It was a complete mess. 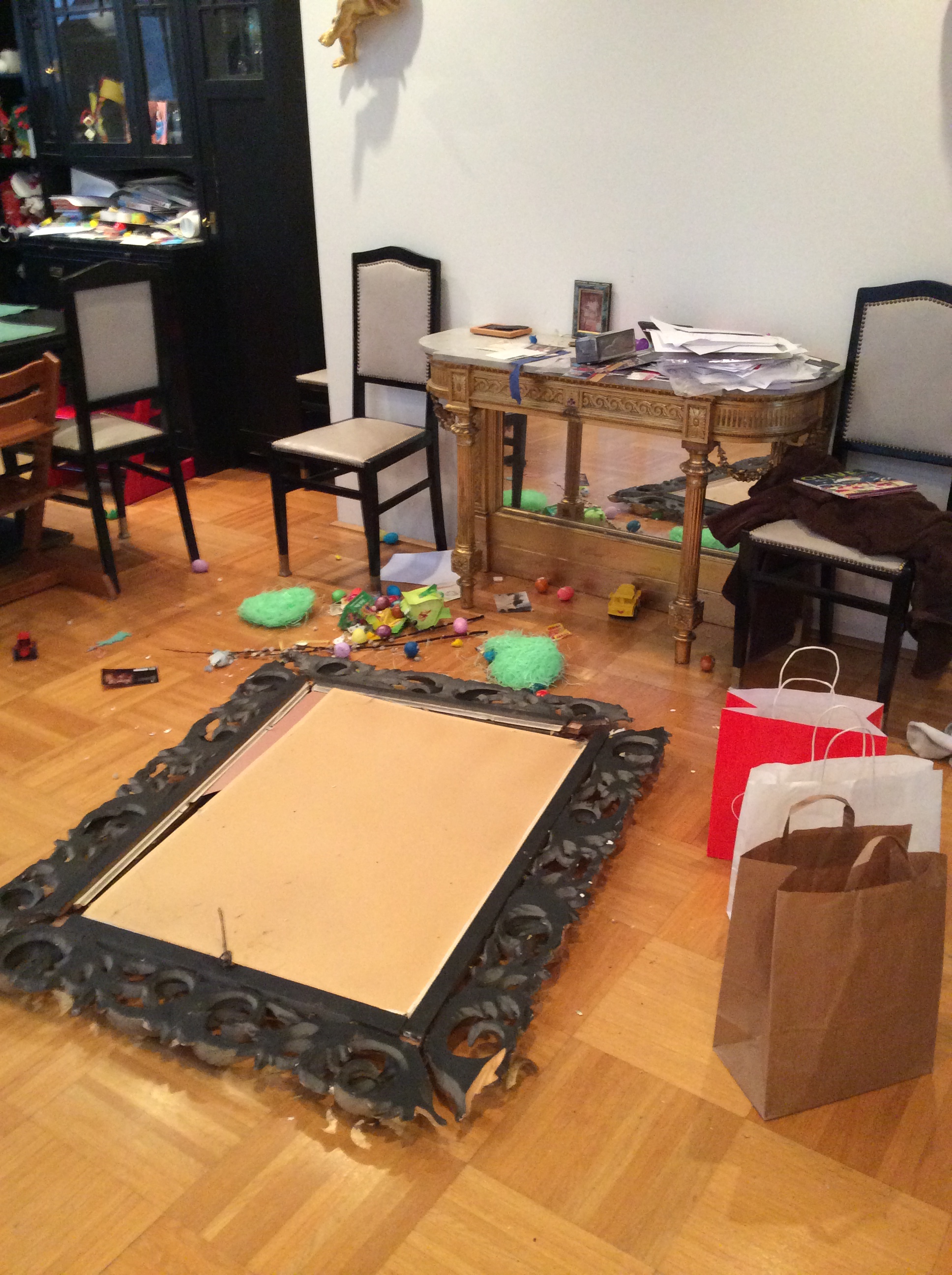 This doesn’t quite do it justice. We’d already started cleaning at this point (the vase was mostly disposed of, for example). It really doesn’t look quite right in the pictures.

The kids did great.  I closed them in the living room, put on the TV, attempted to impress upon them how vital it was that they not leave the room, and went to assist Dan with the cleanup.  It’s one of those jobs where there is no good place to start.  You just have to start picking at the edges and hope that it gets less overwhelming as you progress (which it did).  The mirror had fallen on a vase (a gift from my sister) which had been holding our Osterbaum, the boys’ Easter baskets, and a pile of papers, drawings and unopened mail that had not been sorted in much too long.  The vase shattering under the weight of the falling 40-50 lb mirror was the first sound we had heard.  Then all of that tipped onto the parquet floor which, though vacuumed earlier in the day, had toys strewn on it.  What a mess.

To my great and pleasant surprise, the actual Easter baskets survived, even though they, too, must have caught part of the weight of the mirror directly (points to Pottery Barn for sturdiness).  The eggs (all of the real ones and several of the plastic ones) and candy were mostly a loss (poor chocolate bunnies) and at least one of the fluffy chicks inhabiting a basket was beheaded.  The beautiful, fancy, hand-painted Austrian Easter eggs we’ve collected since our arrival here were mostly destroyed.  A few were basically vaporized — only spots of sparkly dust and a few sad, squished ribbons remained.  Most were just horribly broken.  Three were damaged but sound enough to keep.  I kept pieces of 3 others that were intact enough to hang again … more or less. 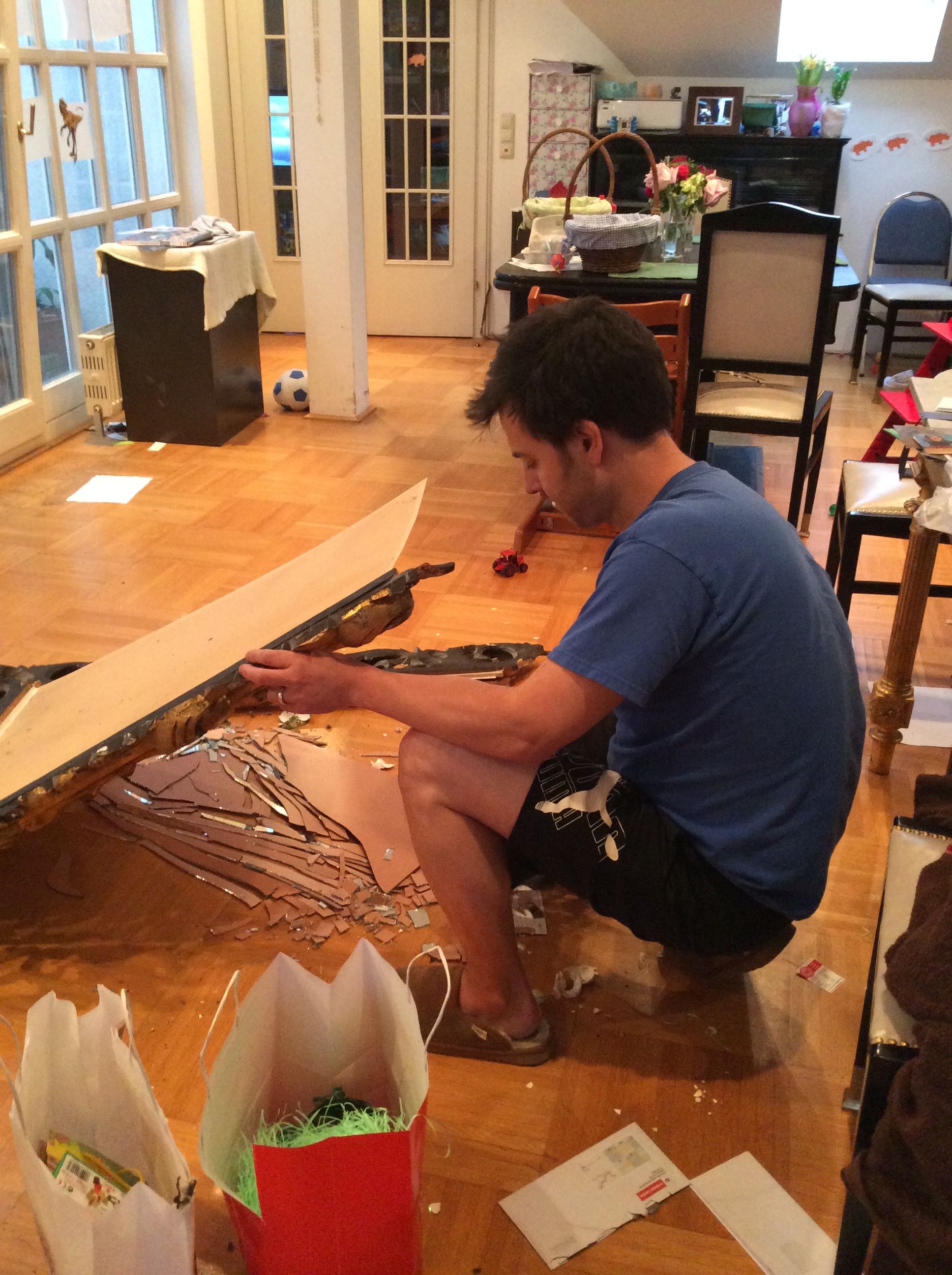 I dealt with the Easter carnage while Dan broke down the remains of the frame and starting dealing with the broken glass.  There was SO MUCH glass.  There were big, jagged triangles and long vicious-looking shards, plus all of the teeny, tiny bits and the pieces that had become little more than dust.  (Plus a lot of glitter from the destroyed eggs — and it’s very hard to tell glass dust from glitter.)  It took 2 hours, but we got everything cleaned up.  The kids patiently watched TV while we worked.  Our floor hasn’t been this clean in a while.

As it turns out, that huge, heavy, ornate mirror was hung with TWINE, which apparently broke.  It was just a question of time.  I’m kind of horrified at the way it was hung — we’d never looked at it, because it was MASSIVE, and it came with the apartment and had hung there for years without event.  We completely took it for granted.

We were so lucky.  We were running late, but we should have been eating dinner, or at least setting the table, at the time that it fell.  We weren’t.  We were all hanging out in the living room.  But the kids play in the spot where it fell, all the time.  Bailey lays there, often.  We walk back and forth past that spot dozens of times every day.  It is, quite literally, in one of the highest traffic spots in our whole house.  We are so lucky that no one was seriously hurt (or worse).  As it was, it was a huge pain, and a complete disruption to our typical Saturday evening, but no permanent damage was done, except to the mirror and some eggs (which I will miss).  Dan even managed to avoid injuring himself with the glass, which is beyond impressive to me.  All is well, we are all safe.  We’re down one huge mirror, but I’m just so, so glad that it wasn’t a much more awful story to tell.