Late last spring, I tucked Liam into the stroller and climbed aboard one of Vienna’s trams (the 38) and rode out to the end.  My destination was a picturesque vineyard hike through the foothills of Vienna’s outskirts, called Stadtwanderweg 1.

I was only moderately successful.  I had a tough time getting from the end of the tram line to the beginning of the hiking route (too many stairs), and although I’d imagined the walk as semi-rural, I wasn’t quite prepared for how isolated parts of the path would be.  I ended up walking just a short distance before heading home, kind of disappointed. 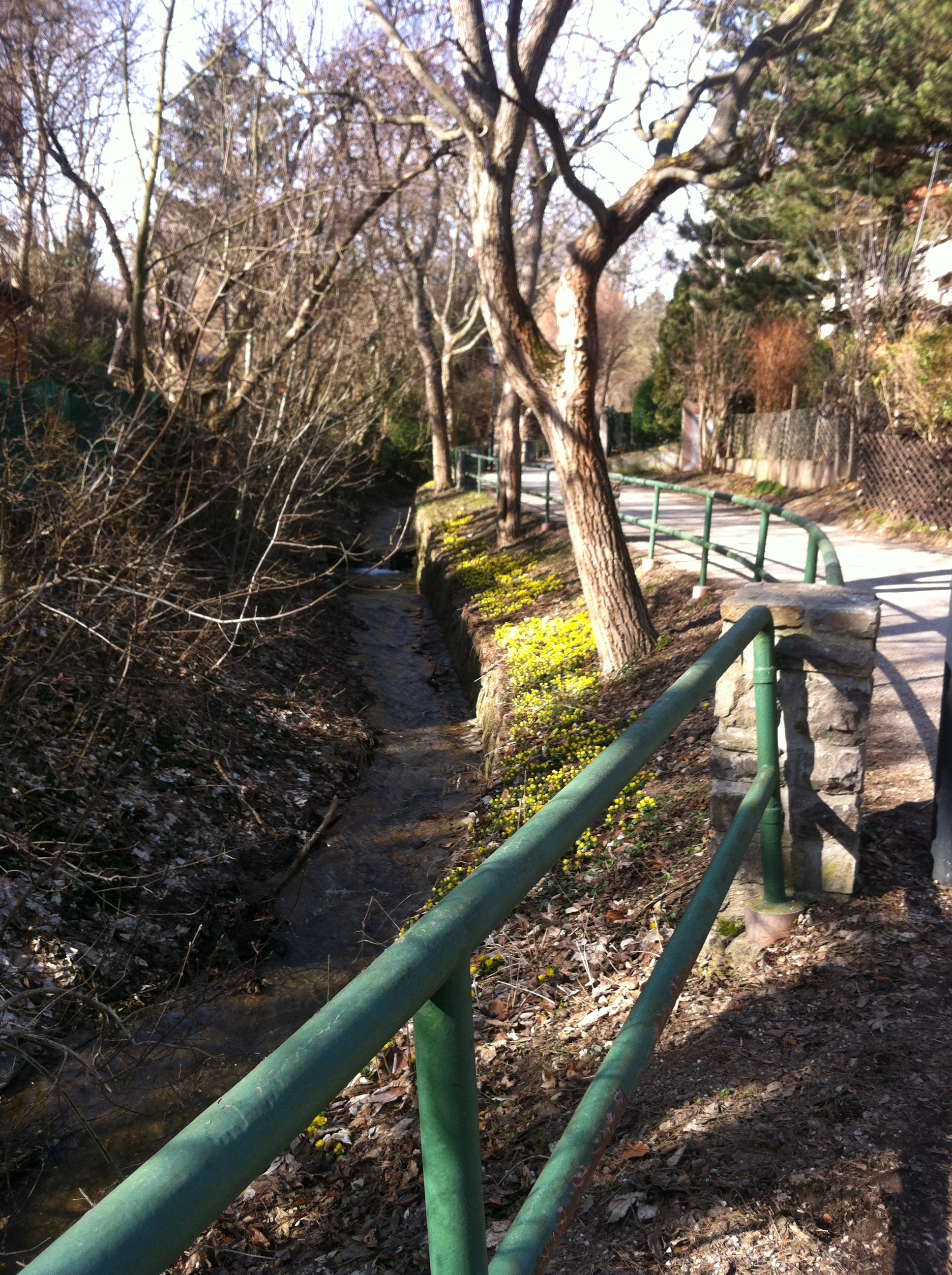 When Jo moved here, revisiting the vineyard walk was on my list of things to do.  With more information and a companion, I knew I’d do better.  Of course, she arrived in October and leaves at the end of the month, and I hadn’t done anything about it yet.  We were running out of time, so yesterday, we took advantage of the beautiful springlike weather in Vienna and hit the trail.

To start, we took the D tram line out to the end, instead of the 38.  This landed us in Nussdorf instead of Grinzing.  As it turns out, the D tram line certainly was an easier access point to the trail, and the part of the trail it connects to is more suburban and less isolated.  The tradeoff comes, though, in the lack of amazing views — although there’s a pretty creek along the trail, we were mostly walking past fenced yards and driveways. 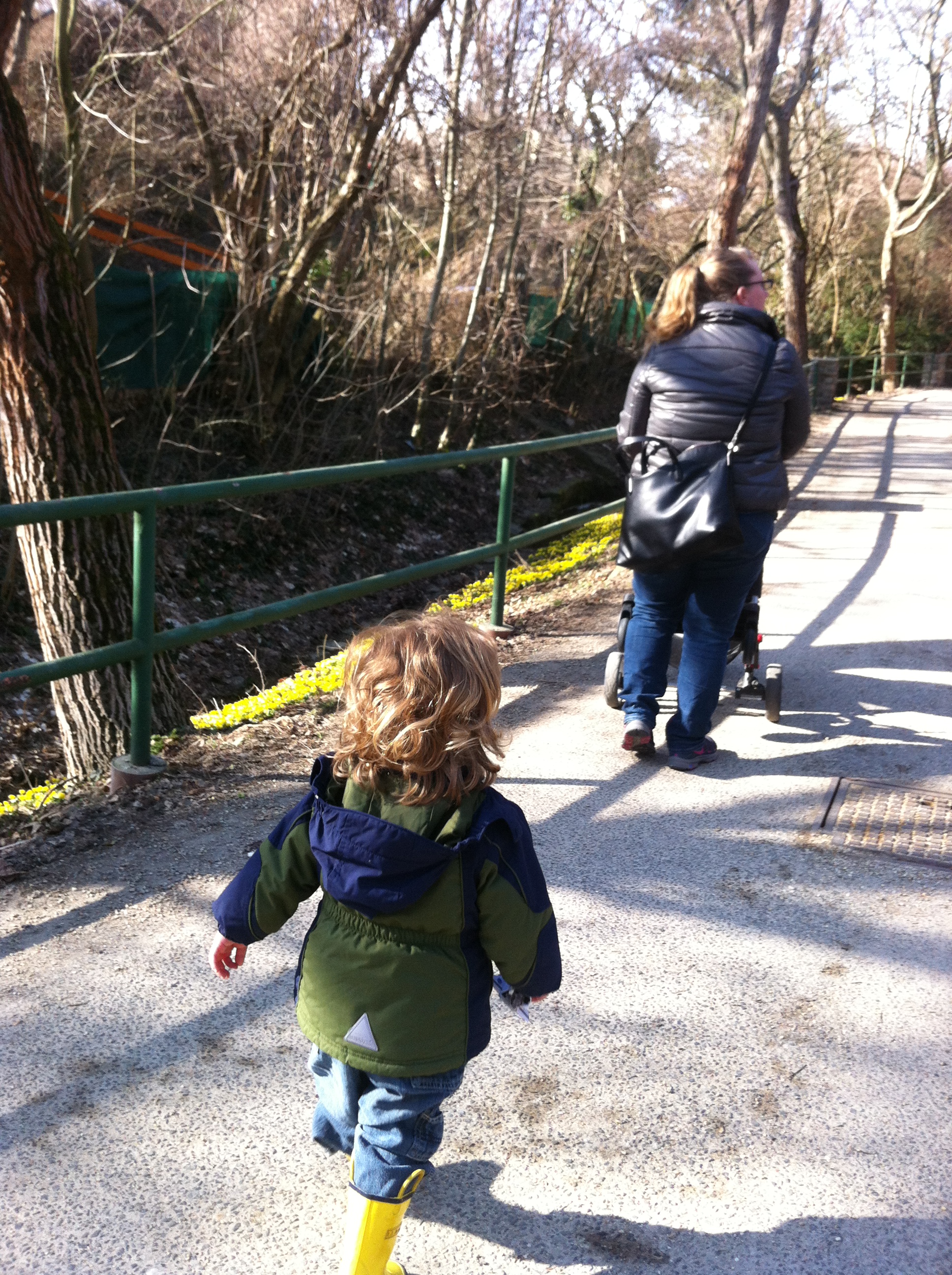 We had a nice walk, though.  Spring is in the air (although I suspect winter isn’t yet done with us).  We saw crocuses, butterflies and a bee.  We heard the birds chirping, and even got warm enough as we walked to stow our coats in the stroller.

The entire loop would have been about 6 miles (although it’s extremely hilly — the estimated time given for the route is 3.5-4 hours, and that doesn’t count walking parts of the route at toddler speed).  We only had two hours before the end of B’s school day, so we walked just a little way and then doubled back.  Our pace was slowed by Liam walking on his own, but he was happy to be free, and we were happy to enjoy the sunshine. 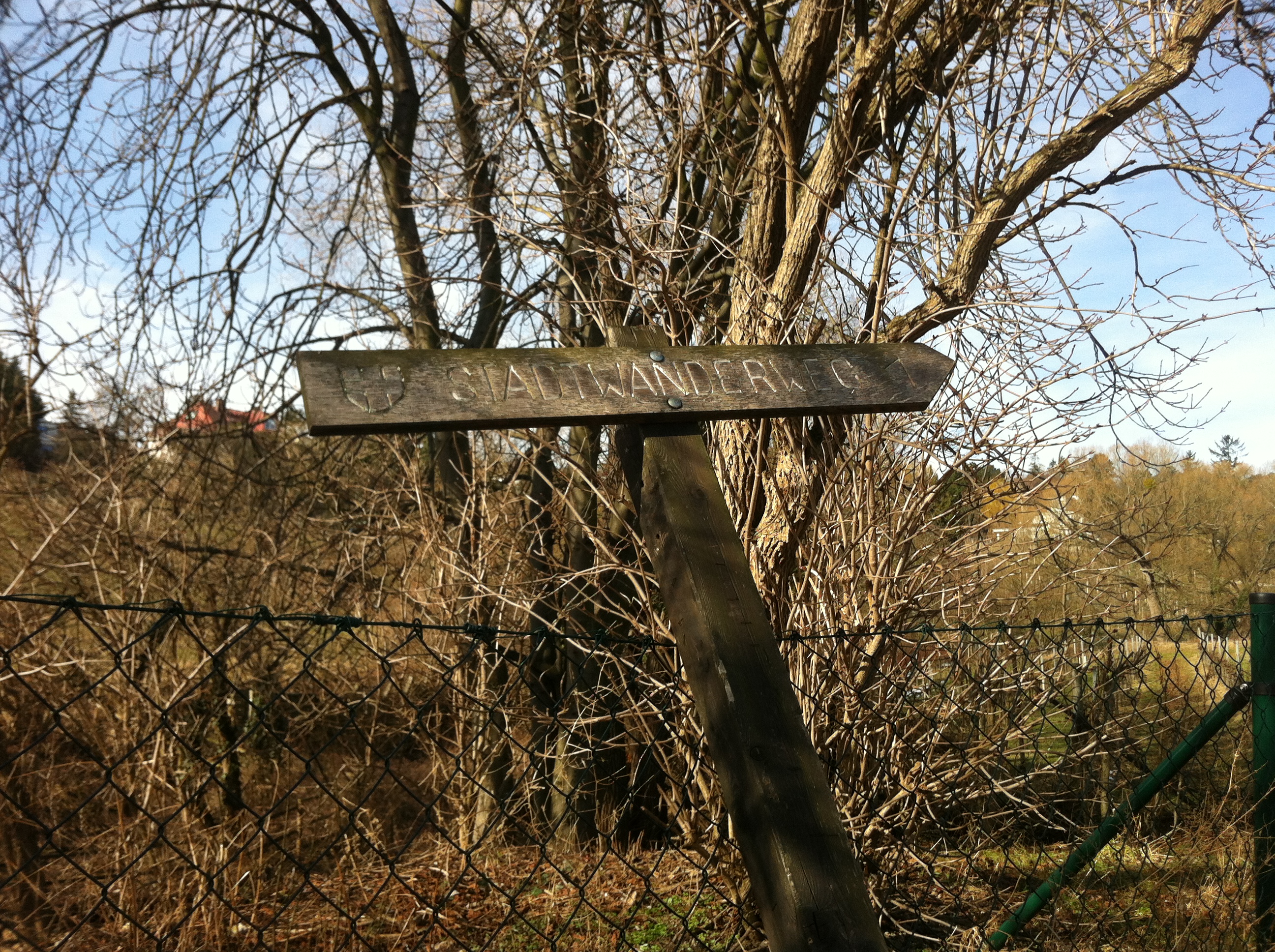 We walked far enough to find the spot where I eventually joined the trail last year.  That section, plus the part beyond where I had previously turned around, was the prettiest we saw, with views up the mountain and over sweeping hillsides lined with grapevines.  Spring is just beginning to wake everything up, so there was a lot of brown and only bits of green (and even some piles of snow left in the shadows), but it was pretty and invigorating as only an outdoor, uphill, country walk can be.

I want to go back again, in the summer or maybe the fall, hopefully on a weekend where we can take our time, stop for lunch along the way, and see the rest of the trail.  I love to walk and hike and see what there is to see, and I’d love to see more of this lovely part of Vienna.  I suspect the view will be even better as we explore further along the path, and I look forward to discovering it.