If you know me personally, or have read more than a few of my blog posts, you probably know that I’m an advocate of traveling with kids, even little ones (mine are currently 2 and 4, and we’ve been a lot of places).  I generally scoff at the idea that “my kid can’t handle a long flight”, I roll my eyes at people who think children should be left at Grandma’s for vacation time (especially if the reason is something like “they won’t remember it anyway“), and I kindly cajole my friends, family and readers to push aside their notions of what life (and travel) with little ones can be and to shift expectations, soften schedules and get out there and see the world, with kids in tow.

That said, many years will pass before I attempt another overnight train ride with my kids.

Benjamin (4) did great.  In fact, I think he was the most comfortable and got the most sleep of any of us, adults included.  The cramped conditions had significantly less effect on him (think cozy, rather than claustrophobic) than they did on us larger folks.

Liam (2) did not fare so well, and we all suffered as a consequence.  The first trip, on the overnight train from Vienna to Rome, actually went ok.  We had a tough time getting in and organized, and then, once we were settled, it was a bit of a lengthy and challenging process to get us all snuggled into bed.  But, once we were all tucked in, we each got a reasonable night’s sleep. 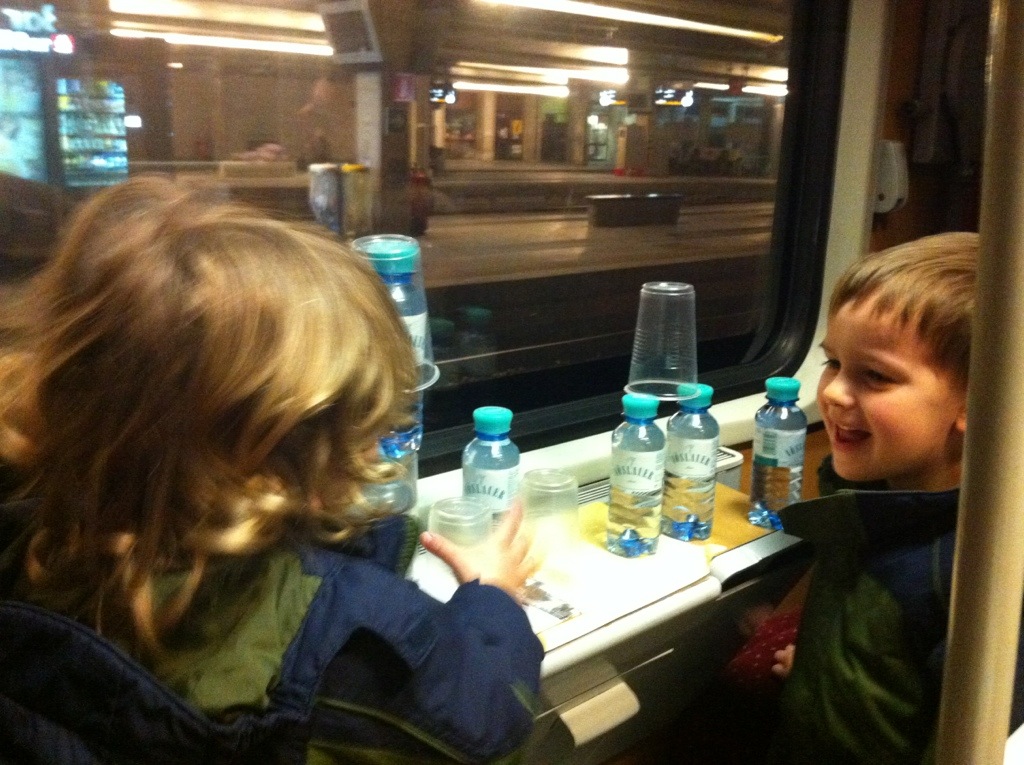 We weren’t so lucky on the return trip (Venice to Vienna).  Since we’d already done one overnight trip, we kind of knew what we were doing, and it was a shorter trip, we thought we’d be fine and we’d probably handle it like pros.  And, we pretty much did, at first.  We got ourselves on and sorted out quickly and comfortably (relatively), and since we didn’t board until almost 9:00, we didn’t waste any time getting the kids (and ourselves) ready for bed.  An hour after departure, we were all in bed, ready for sleep.  It actually was one of our earlier bedtimes on our entire trip.

The problems began a few hours later, during a very long, post-midnight stop.  All trains stop, of course, but an overnight train stop can be particularly frustrating and uncomfortable.  When the train stops, sometimes for an inexplicably long time, you lose the comforting movement of the train as well as the sound barrier (for yourselves and others) that the train’s movement provides.

In our case, during this particular stop, Liam woke up.  And cried.  And screamed.  And couldn’t be consoled.  And it was 1:00 in the morning and there was nothing we could do.  The sound travelled throughout the car (during other periods when the train was stopped, we could hear someone coughing several compartments away).  We were all awake, we were all unhappy, we were probably being cursed at (in various languages) from the other compartments, but we couldn’t make him happy and we couldn’t make him be quiet.  We couldn’t walk up and down the aisle with him like we might have on a plane trip, or rely on any kind of ambient engine noise to limit the damage to those sitting closest to us.  We had no options.

All we could do was try.  We offered water, a snack, more covers, less covers, a back rub, a snuggle, different toys, a new diaper, the iPad . . . nothing worked.  He was miserable, he was crying and we were stuck.  He’s too little to be reasoned out of it and too little to just “tough it out” if he’s uncomfortable.  2 year olds just react to their environment (if they can’t adjust it to make themselves comfortable) and he did not like his situation.

He finally asked for me (he’d been sharing a berth with Dan) and I snuggled with him.  That helped.  But as an incredibly light sleeper with a bad back, I’d been hoping to get to sleep on my own.  I intended to cuddle with him until he fell asleep and then switch with Dan.  No luck — he was on to me and woke up crying as soon as I tried to move.  So, I took one for the team and curled up with Liam.  I didn’t sleep, but everyone else did (and we weren’t pelted with fruit when we disembarked, so I guess our fellow travelers were at least a little grateful).

B did great.  Even in Liam’s most upset moments, he only woke for a bit.  He was comfy and happy and enjoyed the experience.  And if he had been unable to sleep, he probably would have enjoyed an all-night party of Angry Birds on the iPad and been quite happy.  That’s the difference between 2 and 4.  I think Liam is just too little.  Until he’s 4 or so, I think we’ll be sticking to flights and daytime trains.