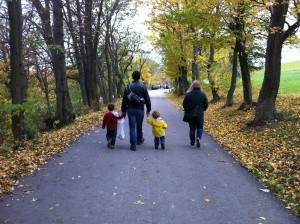 We had such a great time last year at the Kurbis (pumpkin) Fest at Am Himmel, here in Vienna, that we made it a priority to return this year.  Last year, we really didn’t know what to expect going into it, but this time, we were much more prepared, and ready for lots of wonderful pumpkiny goodness.

It’s a bit of a trek to get there from our house via public transportation (the only kind of transportation we have).  It took nearly an hour, and involved a strassenbahn (streetcar), a bus and a 15 minute walk — but, as last year, it was well worth the effort.  We started by playing for a short while on the nice, wooden playground, followed by about a half an hour of fruitless attempt to get our kites up in the sky.  (There was a tiny bit of breeze, but we just weren’t having any luck.)

Then, we got to the really good stuff — the pumpkins!

Next was lunch.  We had langos (a traditionally Hungarian fried flatbread type thing) covered with garlic, pumpkin seed pesto (which may be my new most favorite thing to eat) and pumpkin seed oil, as well as pumpkin cream soup.  Benjamin, who started the meal insisting he wouldn’t eat anything other than pizza, ate nearly an entire langos himself, and Liam consumed an entire bowl of pumpkin cream soup, pumpkin seeds and all. 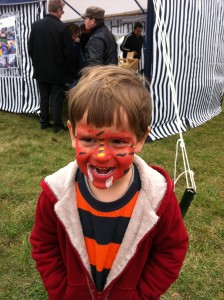 Then, we went for face painting.  B had told us, repeatedly, that he wanted to be a red and orange dragon.  We were skeptical that this would be possible — I would have expected it to be impossible if we’d been able to communicate in English, but in German, I thought our prospects were dim.  I was surprised, then, when he reached the front of the line and told the face painter, “I want something red!” and she replied (in English), “How about a dragon?”  He turned out as the cutest dragon I’d ever seen.  Liam must have agreed, because he decided he wanted to be done exactly the same as Benjamin.  He sat, quietly and happily, but only through the red base paint, and then he decided he was finished (but he was thoroughly happy with what he got, too). 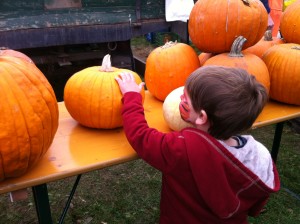 So, with our two cutest dragons in tow, it was time to select pumpkins!  B walked right up to the pumpkin stand and chose a pumpkin half his own size.  We have a family rule that you can’t pick a pumpkin that is too large for you to carry, so he selected the one immediately next to it, and was done.  He proudly announced, “I found the perfect pumpkin!”  Liam selected a tiny pumpkin, and he was happy too.  Last year, the boys wanted to wait until we got home to carve our pumpkins, but this year, they opted to do them at the festival, so we borrowed a spoon and a knife, and started work. 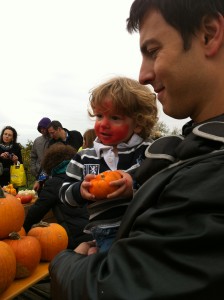 We didn’t get very far, though, because about halfway through, B got too cold to continue (it was only about 50 degrees, with a little breeze, and lots of clouds) so we scooped the pumpkins out (giving us less to carry home) and headed back home . . . with stops to purchase honey cookies and excessive amounts of pumpkin seed pesto on our way out.

We had a great time.  We feel very festive and autumnal and pumpkiny today.  It was our plan to attend a different pumpkin fest tomorrow, but the weather looks pretty dismal (colder than today and raining) so this will probably be our only pumpkin fest for this year.  It was a good one.

3 thoughts on “Am Himmel Kurbis Fest”