Until today, my kids really had no idea about Disney. Outside of the Cars movie, their only exposure to Mickey and his friends was when our friends came to see us in February and brought some tv shows along with them.

So, our announcement yesterday that “We’re going to Disney!” was not met with the excitement that it might have been from other kids their age.

I think next time, though, it will be.

With grandparents who live in central Florida, I knew this trip would come sooner than it would have otherwise. Today, we made our first Disney trip — to the Magic Kingdom.

Driving to Orlando this morning was the calm before the storm. They didn’t know what to expect, so they weren’t worked up about it. That won’t ever be true again. Seeing them cautiously regarding the entrance, gradually catching our enthusiasm, I know it will never be like that again.

Of course, once we finally got our tickets, got in, had ice cream, watched the parade and rode the carousel, the kids wanted to go home (it was 11:53).

We rode on a bunch of rides, saw a 3-D show, ate some ridiculously expensive lunch and had more ice cream than was probably prudent. We got too much sun, rode out a series of melt-downs (mostly from Liam), avoided some potential thinderstorms, and left, after nearly 11 hours, thoroughly exhausted.

Benjamin’s favorite part was the carousel (which he also listed as his least favorite, “because it was too wild”) and I think Liam liked “It’s a Small World” (which I also enjoyed, aside from the fact that if I stare too long at any of the characters, all I can think about is what a good horror movie could be made with them).

Dan observed that Disney is like Vegas for kids — signs and advertisements, huge resort hotels, places that are trying to capture their attention and get you to part with your money at every turn.

I was astounded by the logistics of the place. The size, the number of people, the attention to detail required. There are so many things to manage, and so many opportunities for something to go wrong. It’s impressive how finely tuned it all is.

And the staff are generally wonderful. I loved seeing how much enthusiasm they all had (or maybe faked, but convincingly) for the kids. It was touching.

We had a tremendous (in all senses) day. We are happy and worn out. And now my kids know what Disney is all about. The world is forever changed by that for them. I’m glad they liked it. 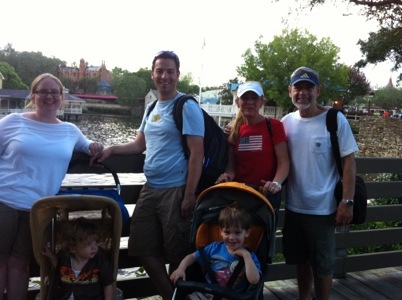 2 thoughts on “Happiest Place on Earth”