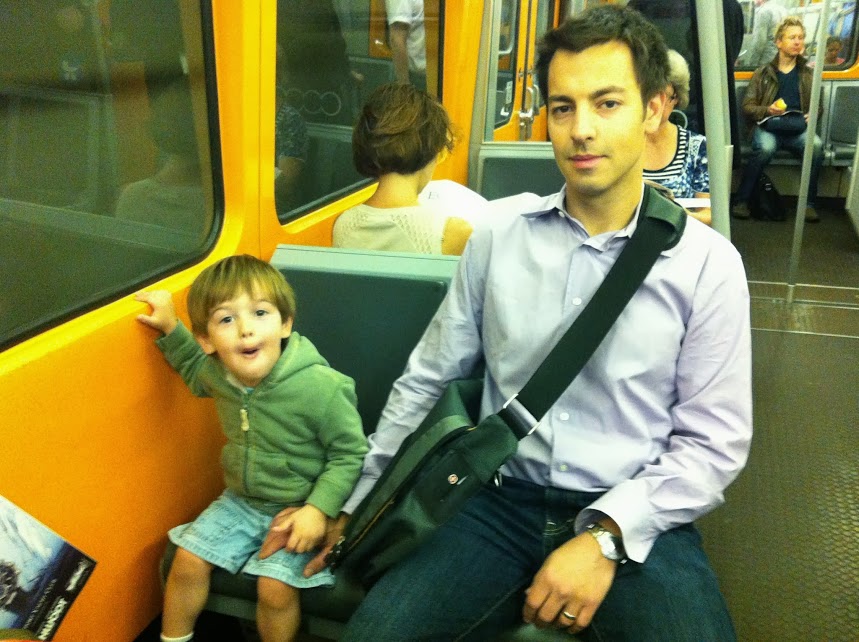 Today was the second day of school for Benjamin.  Liam and I went with him and got him settled in, just like yesterday.  But once he was set and playing happily (about 20 minutes after we got there) the teachers suggested that we say goodbye and leave him to play without us.  I was nervous — I was sure he was going to fall apart when I said I was leaving.  Nope.  I went to tell him and I had to drag a hug and a kiss out of him before he turned around and headed for the “grocery store”.  Sigh.

So, off we went.  I met Dan at his office and joined him for coffee.  Liam dozed off, Dan went back to work, and I sat.  I was so certain I’d get the call on my phone — “Please come console your brokenhearted child”.  Nope.

When I went to pick him up, a couple of hours (!) later, he was a happy camper — playing outside in the big yard with the other kids.  Turns out, Benjamin cried twice today.  The fiirst time was while I was away — when he jumped out and yelled “BOO!” at another kid and she yelled, “NO!!!!” right back at him (apparently, he fell apart and it took several minutes for him to calm down).  The second time was when I showed up and told him we’d be leaving soon.  He didn’t stop crying until I assured him that we’ll come back to school tomorrow and he’ll be able to stay and play.

While I was gone, he ate a snack, did an art project, played, cried, played some more.  I’ve never been so glad to see him sad as when I told him it was time to come home.  It would have been much worse if he’d been relieved — then I would really be questioning the decision for him to be at school.  As it is, he’s having a good time — and as long as he is, I want him to be there.  I do think he’s having experiences he wouldn’t get otherwise.  (Even just learning that not everyone enjoys having “Boo!” shouted in their face is a good life lesson, and an easier one to learn now than later.)

I miss him when we’re not together.  I may get to a point of enjoying the time — the ability to get things done, or to relax, or to spend one-on-one with Liam.  But for now, I just miss him.  The fact that he enjoys it makes it easier, but not a lot.