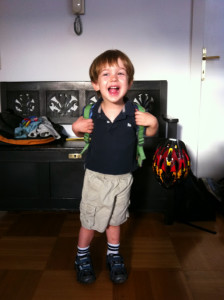 Last night, after the kids were in bed, I completely fell apart.  Heartbroken, sobbing.  Wishing to be able to replay sections of the past 3 years of my life and make different choices — play more, cuddle more, read more, clean less, never be frustrated, irritable or too worn out to play.  I don’t want to give up any time with Benjamin every day — not even 4 hours.  I want to be with him.  I want to be able to play with him, kiss his boo boos, read stories, do art projects, go out and see things.  My sadness is almost completely selfish.

And, so far, completely unfounded.  Benjamin’s first day of preschool/kindergarten was fun, short and without trauma.  We even managed to arrive on time!  He played (mostly by himself, but a little with the other kids), talked to the teachers and got nearly every toy in the place out to play with.  His attention span was about 4 seconds long — every time he started doing something, he got distracted by something else.  He literally gasped with joy over the puzzles with pictures of Lightning McQueen, as well as the grocery store section of the classroom, complete with pretend food and a shopping cart.  He built train tracks, played with play dough (first time!) and started several art projects.  I stayed with him, but he only checked in with me a few times.  At one point, I left for a few minutes to feed Liam, and he was so busy playing that he didn’t care to hear where I was going and didn’t seem to notice my absence. 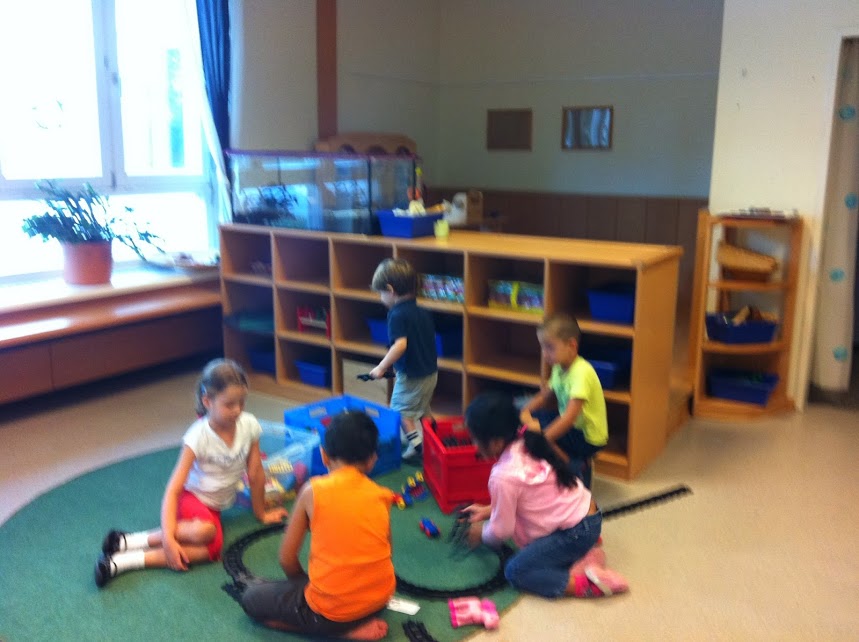 On the teacher’s advice, we kept things short — we only stayed for a few hours, with the intention of leaving him interested enough to look forward to coming back tomorrow.  It seems to have worked.  He wants to go back tomorrow, especially because he didn’t get a chance to play outside in the big playground.

The original plan was for us to repeat this pattern, of Liam and I going with Benjamin to school, every day for the rest of this week.  The only downside to today going so well is that his teachers think he’s ready to move on to the next step (and I agree).  Tomorrow, Liam and I will go with him and get him settled in the morning, and then we’ll go out for an hour and come back to join him for a while, before heading home.

Today, the hardest thing about being there was wrestling Liam (many of the toys and games had small parts that Liam wanted to, but shouldn’t, play with, so I had to keep him under close watch the whole time — not the idea of fun for an 11 month old).  Tomorrow, I actually have to leave B at school for a little while.  It’s going to be harder for me than for him, I expect.

1 thought on “First day of school”