With Benjamin starting preschool next week, we need to reorganize our morning schedule.  In order to get him there on time, we will have to leave the house half an hour before Dan’s supposed to be leaving now (and more often than not, we don’t make our current schedule, either).  So, we need to start getting up at 5:30 in the morning.  Ouch. 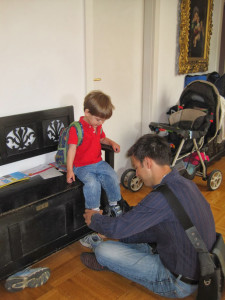 We decided to “practice” our morning schedule this week so that if we are totally off on how long everything will take, it won’t result in us being an hour late to school on Monday morning.  Yesterday was our first practice day.  It was a complete failure.  We tried agian today.  Fail again.  For our practice days, we had decided that Dan & I would go through the motions of our usual routine, but that we wouldn’t actually get the kids up early if they weren’t up anyway (because there’s no reason to torture them, which would in turn torture us).

The result is, of course, that the kids didn’t get the memo about getting up early, and since we’ve decided not to wake them, it’s just about impossible to “practice” our morning routine with just Dan & I.  Actually, just me:  both yesterday and today, Dan has ended up dozing off while holding a sleeping Liam who doesn’t want to go back to bed, but isn’t really ready to get up, either.  The whole “practicing” thing was a nice idea, but it isn’t working.  We still have the weekend.  I don’t know what’s the best course of action:  to force the entire family to get up earlier than necessary in order to prove a concept, or let it go and risk being profoundly late to Benjamin’s first day of school on Monday.

I think we’re going to skip the practice and keep our fingers crossed for Monday.