Though I’ve parented on two continents, I’ve only parented school-aged children on one, and so I don’t have much perspective on whether the things I see here which are different from my experience are different because I’m in another country, or just because times have changed.  (I get the feeling that it’s a little of both.)  I get the sense that some things, like less time spent sitting formally in rows at desks, are more of a universal change and that some other things, like having two recesses each day, are more unique to the schools that my boys go to.  And, they are currently at two different schools in two different school systems, so things are certainly not uniform even between their experiences.

Last fall, we had a fairly typical “back to school night” at B’s new school (though it wasn’t called that) which was comforting because it was something I expected and wanted from the school and from B’s teacher.  The school was new to all of us, and I desperately wanted to find out as much as I could about the philosophies and practices of both the school and B’s teacher.

Then, shortly after the beginning of the school year, we had a parent/teacher conference with B’s teacher.  And though I found the concept of a parent/teacher conference familiar, I found the timing strange — the kids had been in school only a month when we met for this conference, so I wondered exactly what we’d be talking about.  As it turns out, it was less a “report card” on how B was doing (although there was a little bit of that) and more of an interactive, let’s talk about how things are going and how we want them to go, let’s check up on if we’re on the same page in terms of his strengths and weaknesses, let’s talk about what we’re going to focus on, and let’s talk about how we can each support each other in these goals, meeting.  And though it wasn’t quite what I had in mind when I went into it, it was actually great.  I got a lot of peace of mind from seeing how well B’s teacher “got” him, and by having her help in sharing some ideas about how we could help him do even better.  That meeting was the beginning of me really trusting B’s teacher to guide him through his learning for the year, and I was able to finally relax about the whole thing because I understood exactly what was expected of him, and of us.  It was great.

Oddly, though, it was the only parent/teacher conference we had all year.  I expected that there would be more, as the year went along, so we could check up on his progress, but that’s not how they do things.

Instead, later on in the year (about 3/4 of the way through) the teachers and students put on a different kind of conference — a “student-led” conference.  From this, I really had no idea what to expect, except that we vaguely understood that B would be leading the whole thing.

And that’s exactly what happened.  It was a chance for the kids to walk their parents through some of their own work.  There were 3 or 4 different stations around the room, and B took us from one to the next, demonstrating what he’d learned in different areas — writing, math(s), science.  And then, B took us around the school, to the gym and then to the music room, to show us what he’d been working on there.

And if I hadn’t been there to experience it, I’m not sure I would have grasped how absolutely BRILLIANT this was.

Of course, as his mom, I think B is clever and talented and brilliant and I love to hear him tell me about what he does at school (though that almost never happens — “What did you do at school today?”  “I don’t remember”).  And, as his mom, of course I loved hearing about his work.  And, I know that he loved having a few hours of our undivided attention.

But, more than that, there was an amazing amount of skill and learning demonstrated during the conference.  First, the kids were responsible for guiding their parents through the process (which is a big responsibility for a 6 year old, but B had a very supportive audience) which meant they had to have been paying decent attention when the teachers taught them how to do this whole thing.  (I imagine they practiced beforehand, too.)  B was in charge.  It was his job to explain how to do the whole thing and to make sure we did it relatively correctly.

In addition to that, he was basically giving a series of oral presentations/demonstrations, but again, to a very receptive audience.  There was nothing slick or overly polished about the presentations, it was very conversational.  But still, he had the responsibility to “present” each station to us, which he did, very comfortably.

And THEN (and this is the coolest part), he had to understand what he had learned well enough to explain it to us!  And that is HUGE.  Because anyone who has ever taught anyone anything will tell you that THAT is how you know they’ve really learned it.  If you understand something well enough to teach it to someone else, you have a truly useful level of knowledge.  I imagine tha the things he “showed” us during his presentation are concepts and skills that he will hold onto for a long time, because going through this process pretty well ensures that they’re stuck in his brain.

So though B thought he was just having us to his class to show us his work (which he was, and he did), he was really doing so much more.  He was leading, he was presenting, and he was teaching.  I know he thought it was pretty cool that we got to come to his class, and he got to tell us where to go and what to do, but I think what we got from him was way cooler. 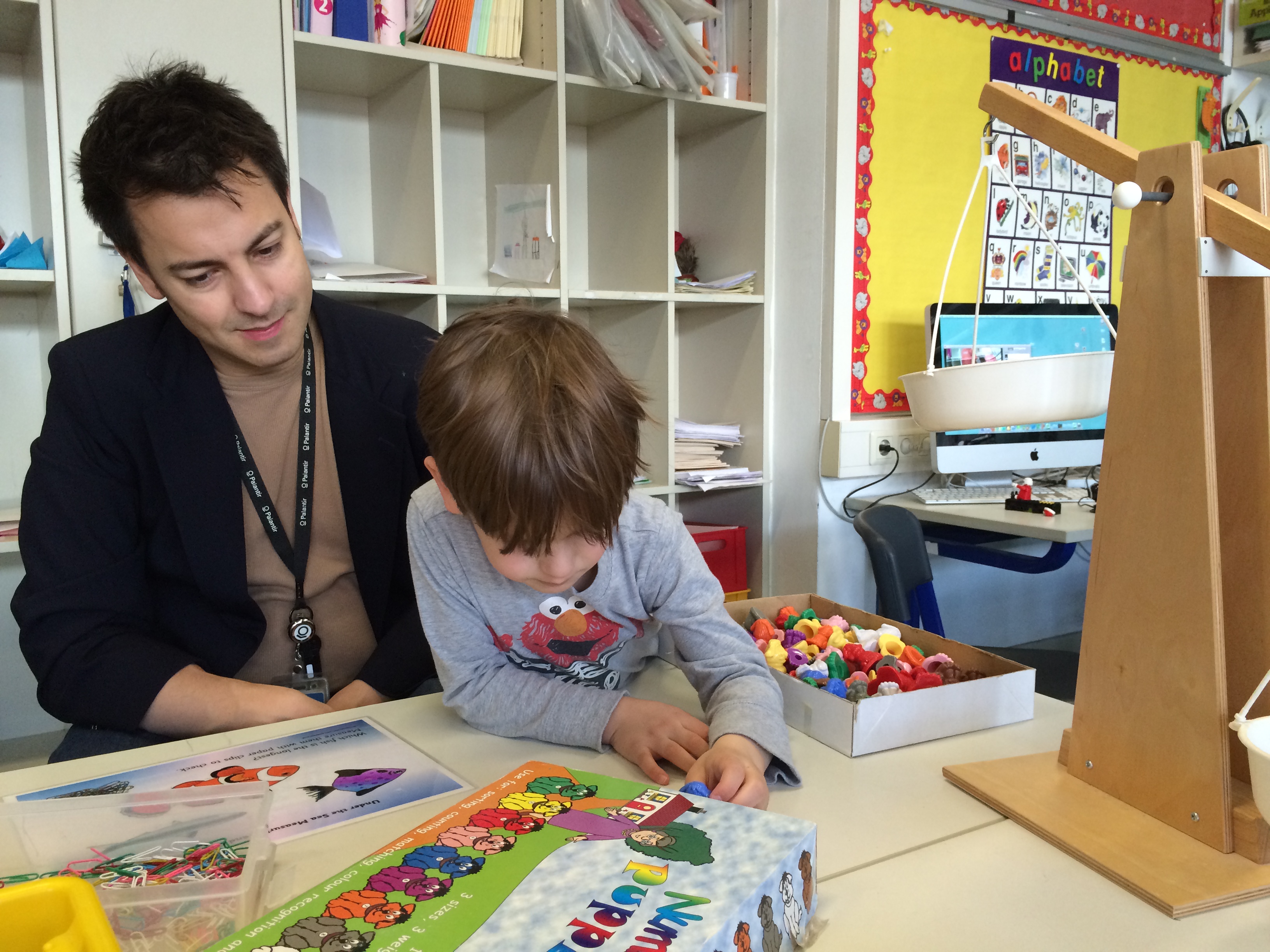