December was kind of crazy in terms of our daily schedule.  The kids and I took turns being sick with various things, and we ended up with very few days that were at all normal.  So, the last Tuesday morning before we headed home for Christmas, I was home with Liam instead of helping out at B’s school (which was my usual plan for Tuesday mornings).  We had a doctor’s appointment, so we could check whether his congestion and fever was turning into an ear infection — I didn’t want to take any chances with an intercontinental flight coming up.  I was just getting over being sick myself, too, and I still had tons of laundry to do and all of the packing, all with less than 48 hours to go before our departure.  I was a bit overwhelmed and exhausted, so after our doctor’s visit (sinus infection, antibiotics prescribed) and our trip to the pharmacy to pick up the necessary medicine, I decided to stop and pick up lunch on the way home rather than making something once we got there.

We got home, rode up on the elevator, got out on our floor . . . and found this across the hall: 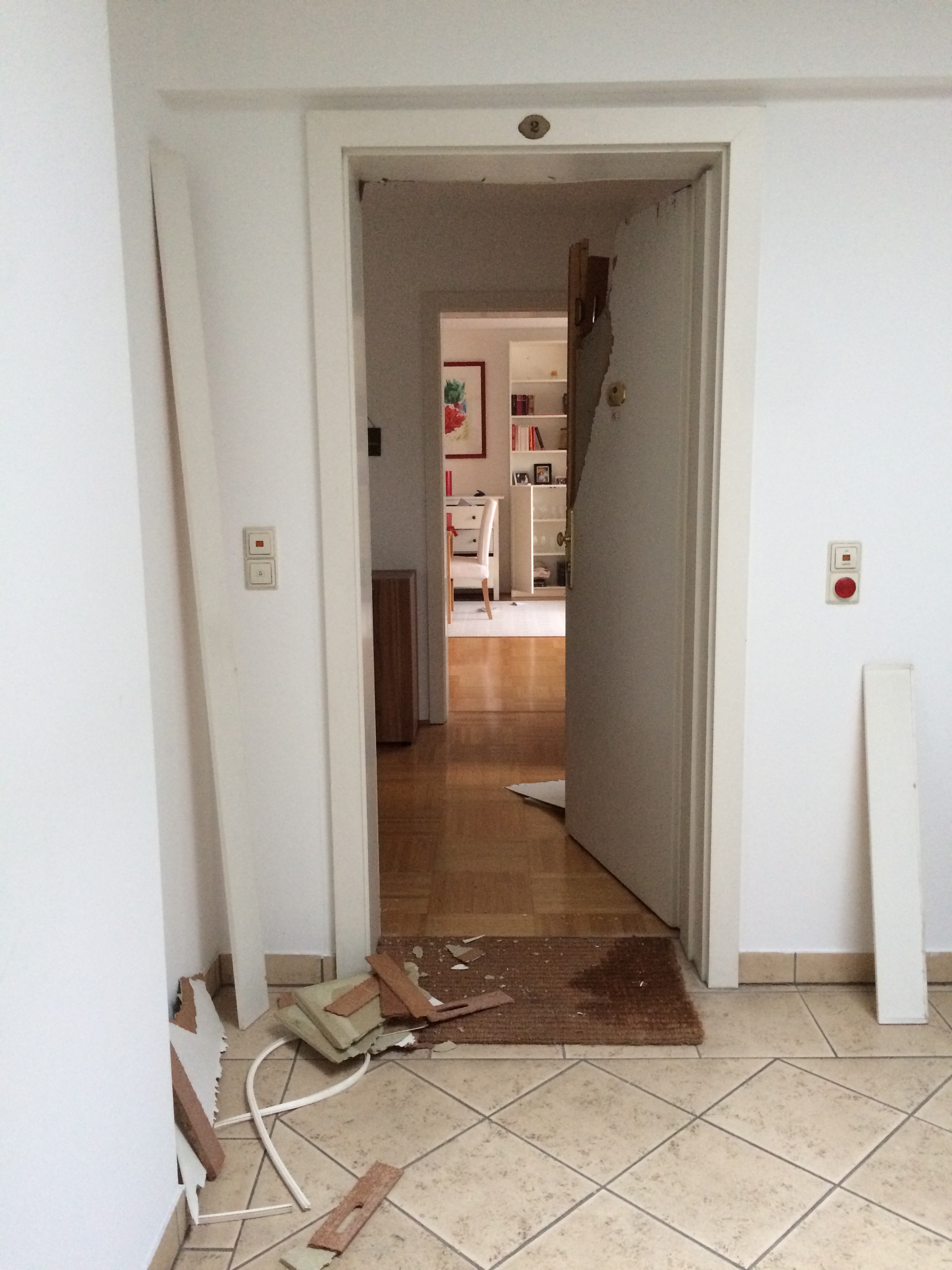 I had no idea what I was looking at.  We’d only been gone for about an hour and a half, and when we left, everything was quiet in our building.  Our across-the-hall neighbor is very rarely around, and I hadn’t seen him in weeks.  Looking at the destruction, I couldn’t tell if there had been some urgent purpose in breaking down the door — had there been a flood, or a medical emergency?  I stood on the landing (there are only 2 apartments on our floor, ours and his) and called out, expecting our neighbor, or maybe our building superintendent, to answer.  Nothing.  As we stood there, I got scared.  It hadn’t occurred to me initially, but I suddenly realized that there might have been a more nefarious explanation to the broken-down door, and that I had no way of knowing if the person responsible was still there (there are no other exits).  Our building was completely quiet.  I was fairly certain that no one else was around, which is not unusual for mid-day on a Tuesday (though I have several retirees as neighbors, and a doctor who works out of her home downstairs, so I’m not always alone during the day).  I was completely freaked out, and not sure what to do.

At home, I would have called the police.  But did I want to try to do that, with my poor German?  What if all was well, and I got things all crazy and complicated for no reason (and couldn’t explain what was going on)?  Without a good command of the language, I didn’t want to insert myself into the middle of a police investigation, but I had to do something.  I thought for a minute and called Dan.  I took Liam inside and locked the door, while Dan called our building manager, who came to check it out (immediately).  He took one look and then called the police himself.

Liam and I stayed inside, but I peeked out when I heard a commotion on the landing.  I saw two police officers guarding the door to the apartment across the hall while two other officers explored inside.  They were taking it very seriously (more seriously that I was when I first saw it) which makes sense — there was no way to know WHAT they would have found inside.

Shortly afterwards, there was a knock on the door, and I answered.  Fortunately, the police officer at the door spoke English (someone, probably our building manager, had explained that we didn’t speak German well).  He explained they needed to fingerprint the door to our apartment, since whoever had broken in to our neighbor’s place had apparently covered the peephole in our door, so that if we’d looked out during the destruction, we wouldn’t get a clear view!  (I am so glad that I wasn’t home, because I probably would have just opened the door to see what was happening.  I’m further glad that Liam and I stopped to get lunch while we were out, or we would have been home 20 minutes sooner.)

Later, when things were less exciting, Liam & I took Bailey outside for a walk, and we encountered our neighbor downstairs in the courtyard on the phone with the door replacement people.  After his call was finished, we talked, and it turned out that the burglars had made off with a lot (I can’t remember exactly how much, but it was in the thousands) of cash, and pretty much nothing else.  According to him, this kind of robbery is the most common kind in Vienna (other than pickpocketing).  They probably took advantage of the front door of our apartment being propped open (we share a door with the kitchen entrance to a restaurant, and the workers commonly leave the door propped open when they take out the garbage or take a smoke break . . . and they don’t always close it when they’re done), buzzed all the buzzers in our building, and when they didn’t get an answer, they went all the way upstairs, picked a door, smashed it down, grabbed what they could as quickly as possible and ran out.  Apparently they almost never take anything of significant size or weight — not even laptops.  By his reasoning, it was only a 50/50 chance that kept it from being our place instead of his.  (But I don’t know that I entirely believe his theory — had they broken into our place looking for cash, they would have been INCREDIBLY disappointed.  The only cash we keep at home is what’s in my purse and what the boys have in their piggy banks — and I had my purse with me.  By choosing his place, they got thousands of Euros . . . so I’m not entirely sure it was just a lucky choice.)  I wonder, though — did Bailey bark?  Did they care?  Is THAT why they didn’t pick our apartment?

It was definitely scary, and the fact that it took a few days for our neighbor’s door to get completely repaired didn’t help much.  In the interim, we were met with the harsh gray reminder of what had happened every time we got off of the elevator or walked out of our front door.  I tried to keep as calm as possible, because I didn’t want to scare the kids.  Both boys were a little nervous around the house for a few days, but nothing bad, and nothing lasting.  I was pretty anxious when I was home alone for the following few days — not that I expected them to come back, but I spend a good bit of time in the house by myself, and I don’t know how often I’m the only person in the building.  It was unsettling.

Luckily, we left just 2 days later to go home for Christmas, which helped put some physical and psychological distance between us and the scene of the crime.  Since then, there have been some changes around our building — the elevator now requires a key for access and the restaurant workers have been instructed not to leave the door propped open (though that isn’t perfect, and I make a point of closing it whenever I see it open).  We barely think about the robber anymore, and I don’t feel fearful at all in our building, though I did for a short while after — especially when someone would unexpectedly ring our buzzer in the middle of the day (though it always was, as it always had been before, typically the mail carrier with a package).  I know that we are generally safe here (statistically, much safer than at home in the US), but this added to my sense of insecurity, not just because it brought up general concern for our physical safety (as it would have for anyone anywhere), but because it highlighted yet another way in which I feel vulnerable because I live in a country where I don’t speak the language well.  There are many ways in which it’s hard to be the outsider, but this was a new one for us.