Day 2 of our vacation was all about horses.  I had wanted to visit the Lipizzaner Stud at Piber since coming to Vienna, but I didn’t know exactly what to expect.  The farm is in a beautiful spot with a great view, so that was a good start.  We arrived, got our tickets, and followed the suggested self-guided tour, even though I was anxious to actually spend some time near the world famous Lipizzaners! 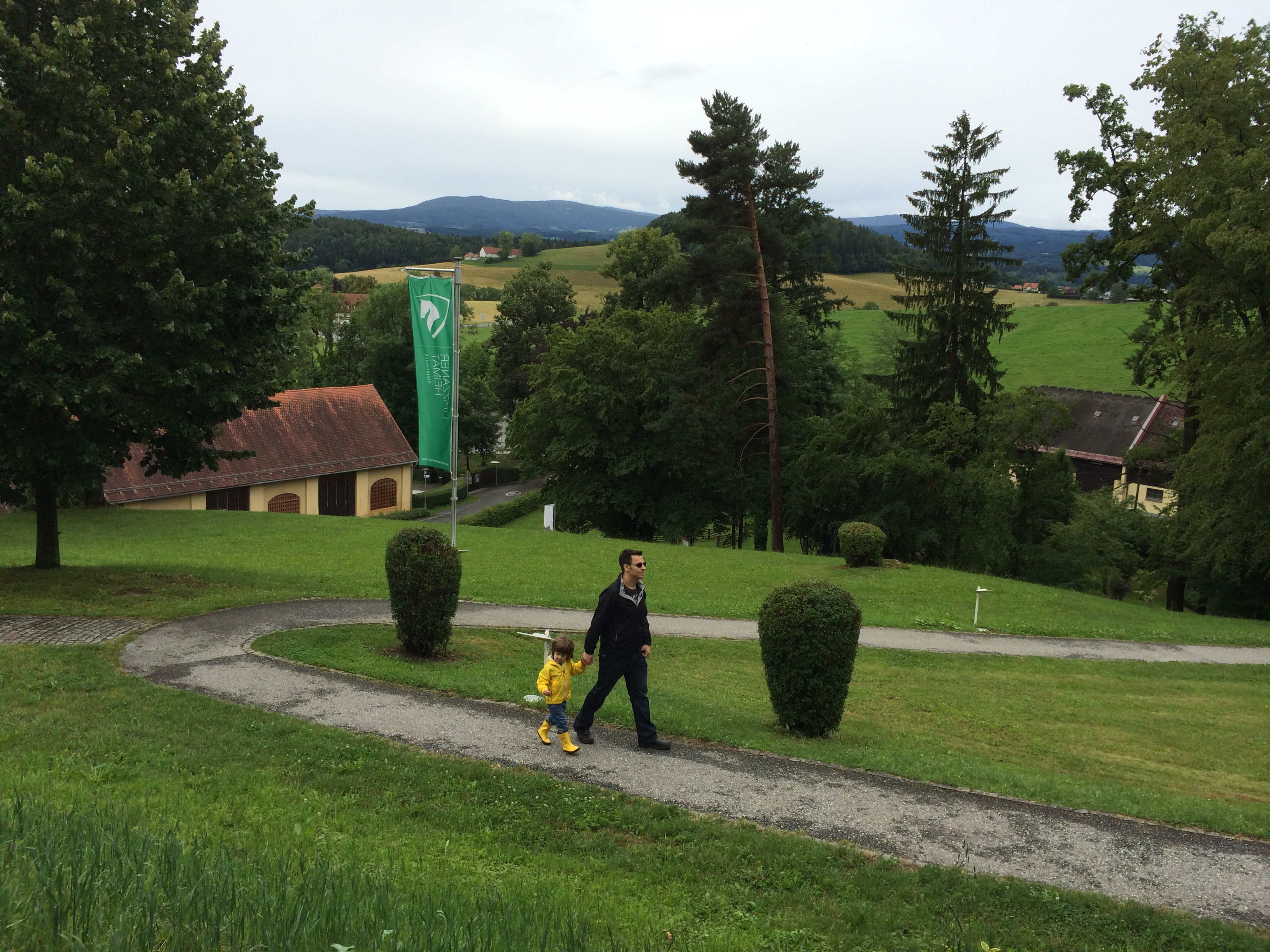 Here in Vienna, I’d already been to a performance of the Lipizzaners, been to see the babies and their moms when they grazed in the Burggarten last summer, and, most recently, taken the “behind the scenes” stable tour.  I was excited to see this last remaining part — the brood mares, the stallions, the young horses and the foals. 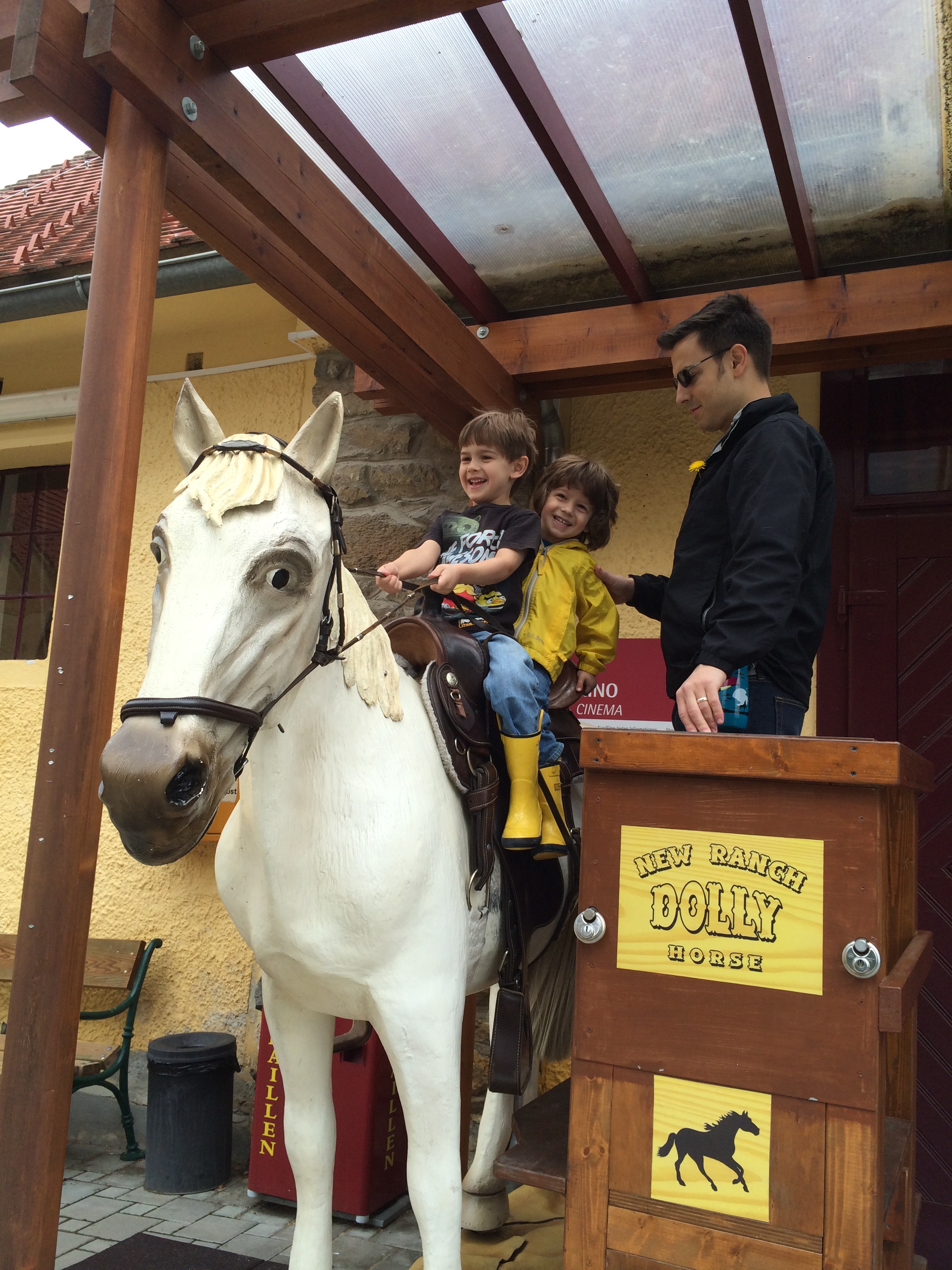 The tour was mildly interesting for the kids, but otherwise not really noteworthy.  But getting to visit the horses was FANTASTIC.  Unlike in Vienna, where there are many rules and physical barriers designed to keep visitors at a distance from the horses, there’s nothing like that at Piber.  We were allowed to wander through the stables at our leisure, visiting, photographing, and even patting the horses.  Liam decided that every single horse we met was named “Willow”.  (I have no idea where he got that.)  It was absolutely worth the trip.  (Though the boys liked meeting the horses, their favorite parts of the day were the ice cream and the playground.) 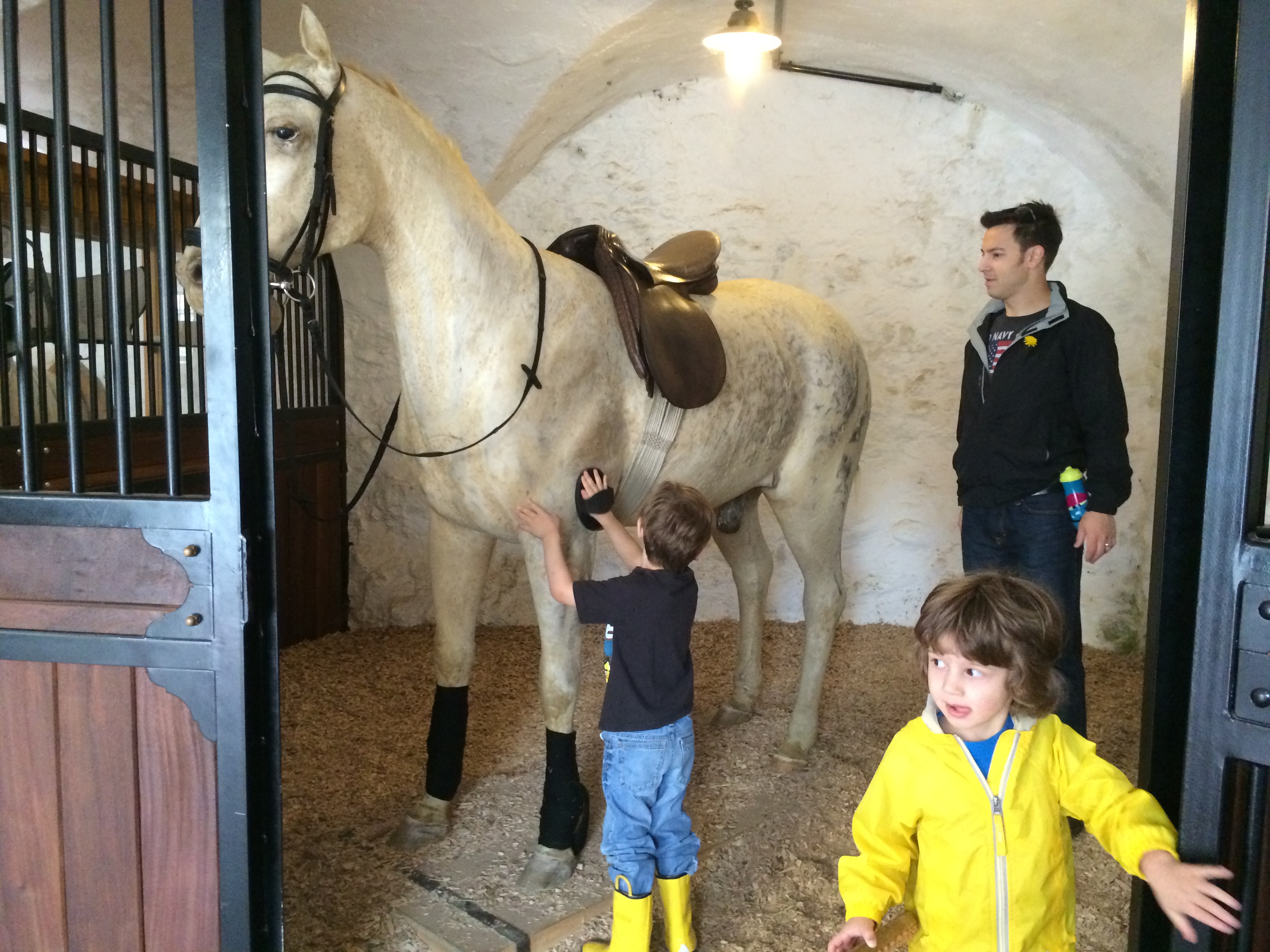 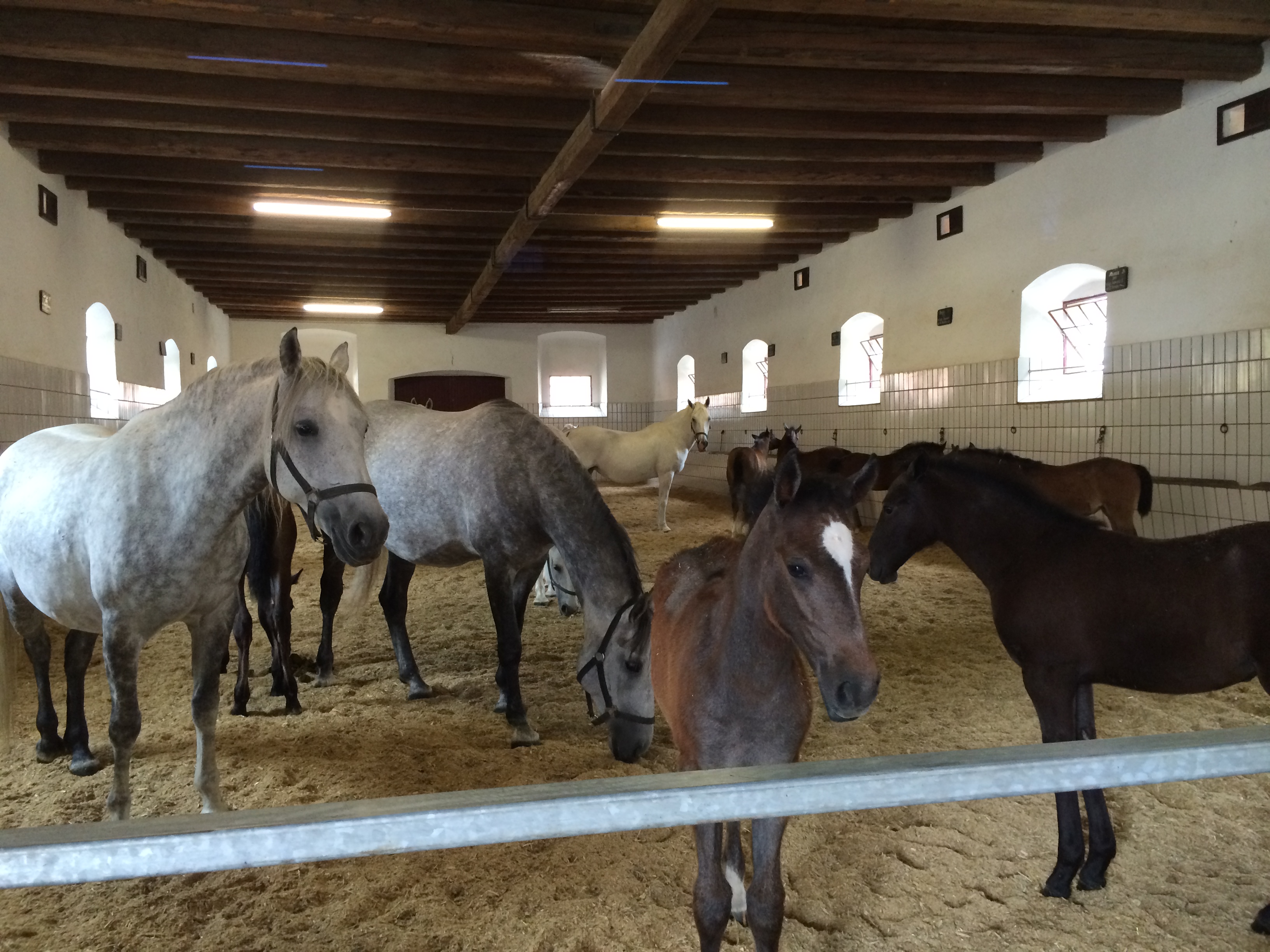 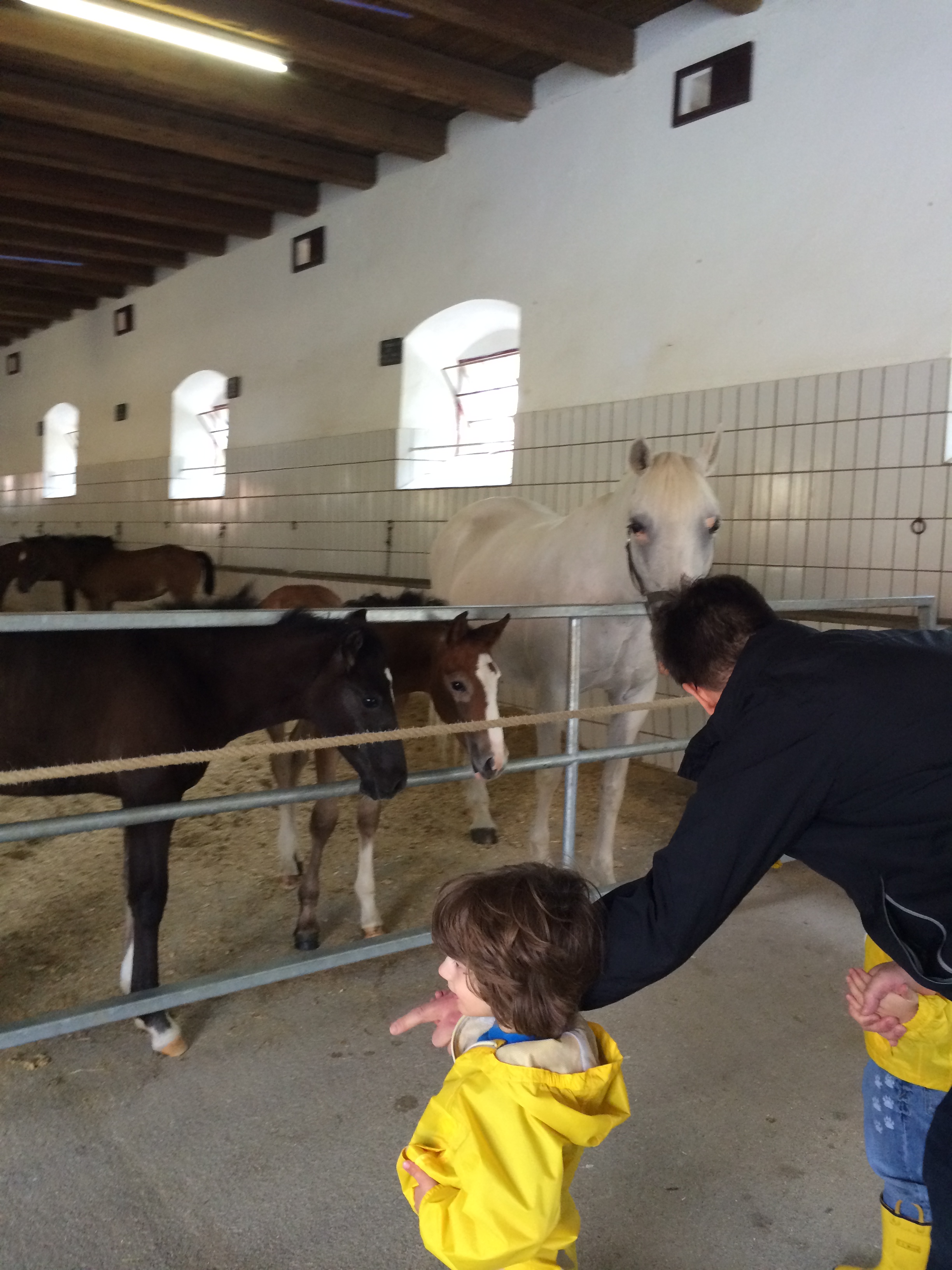 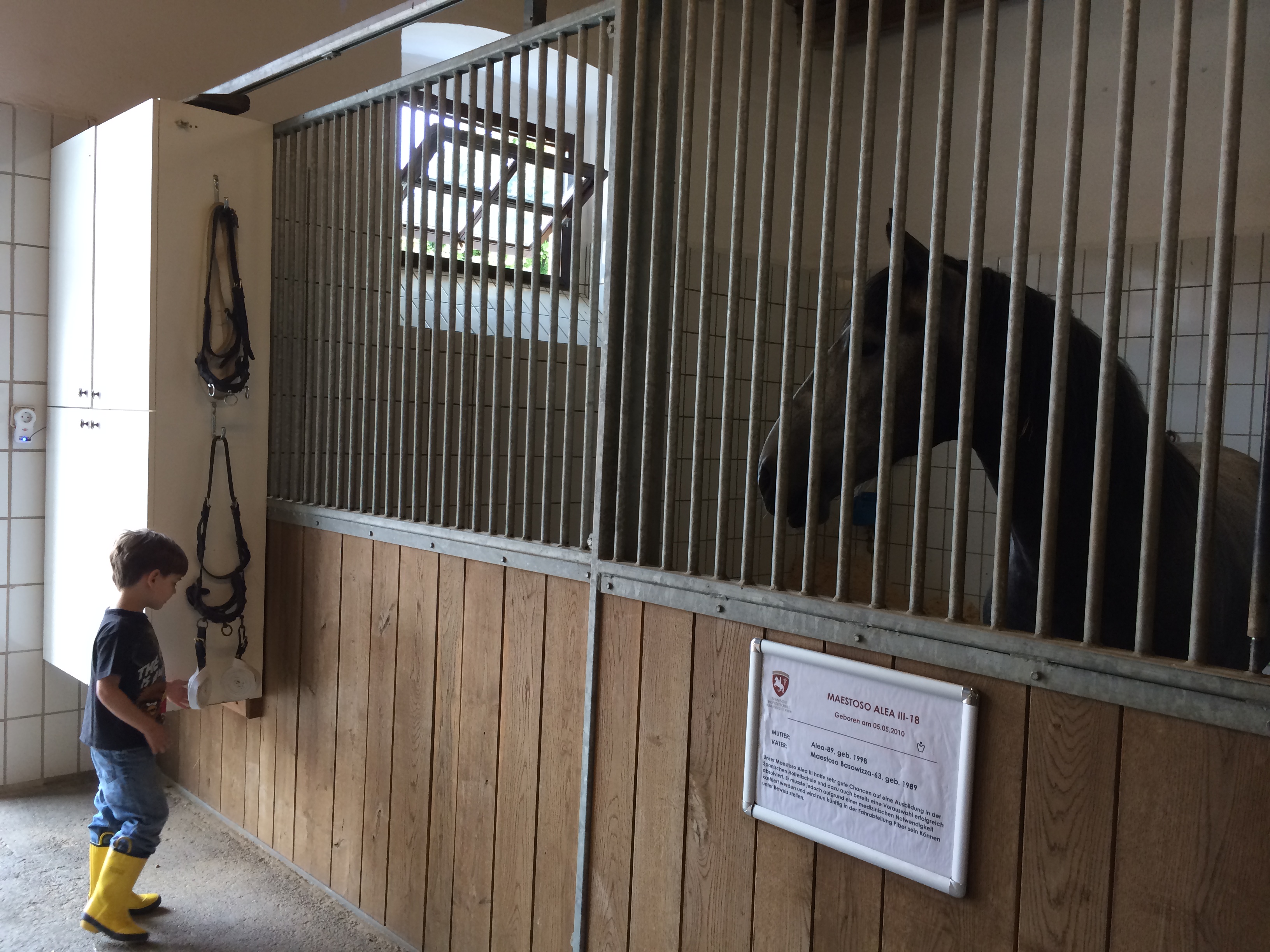 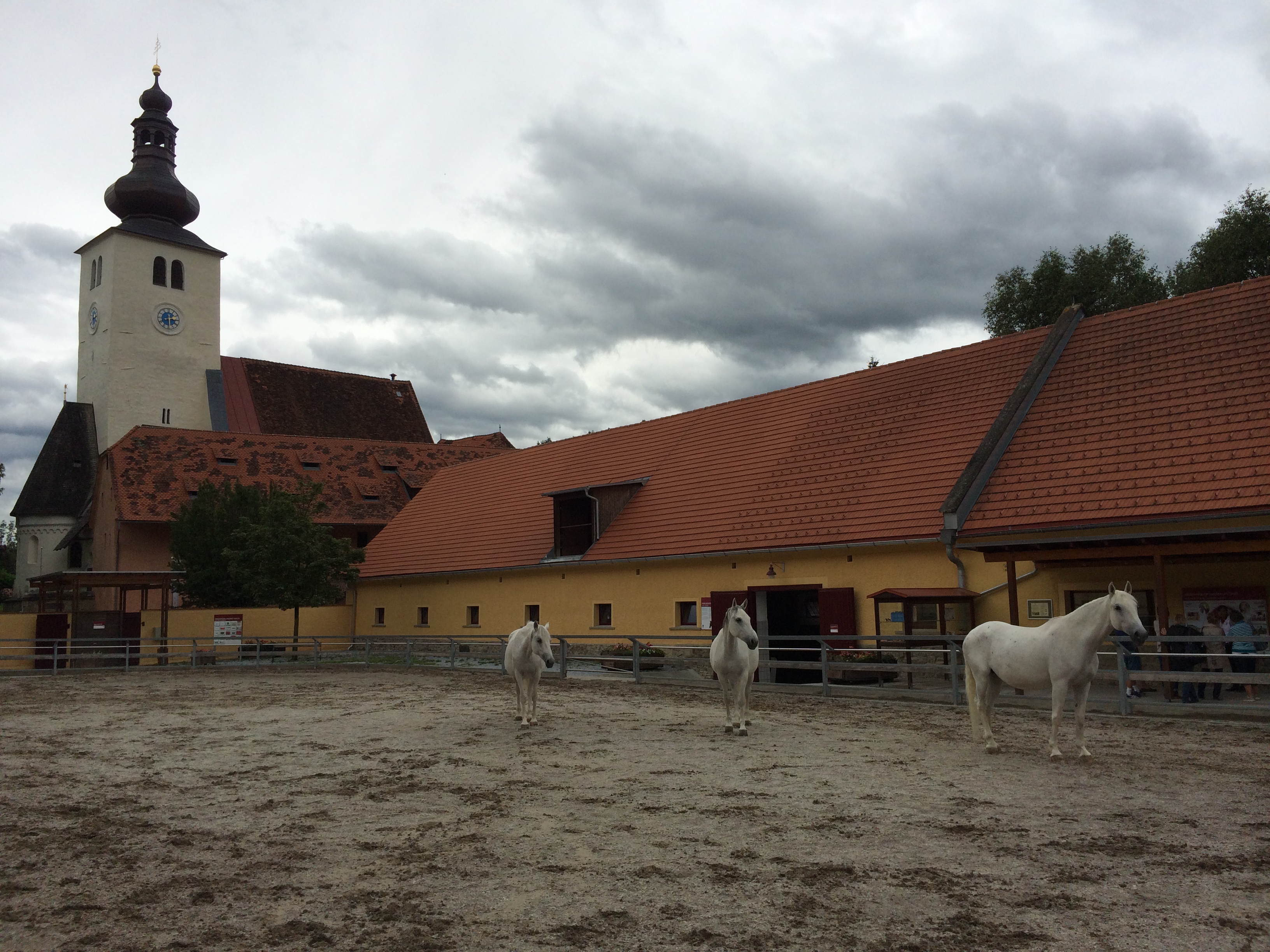 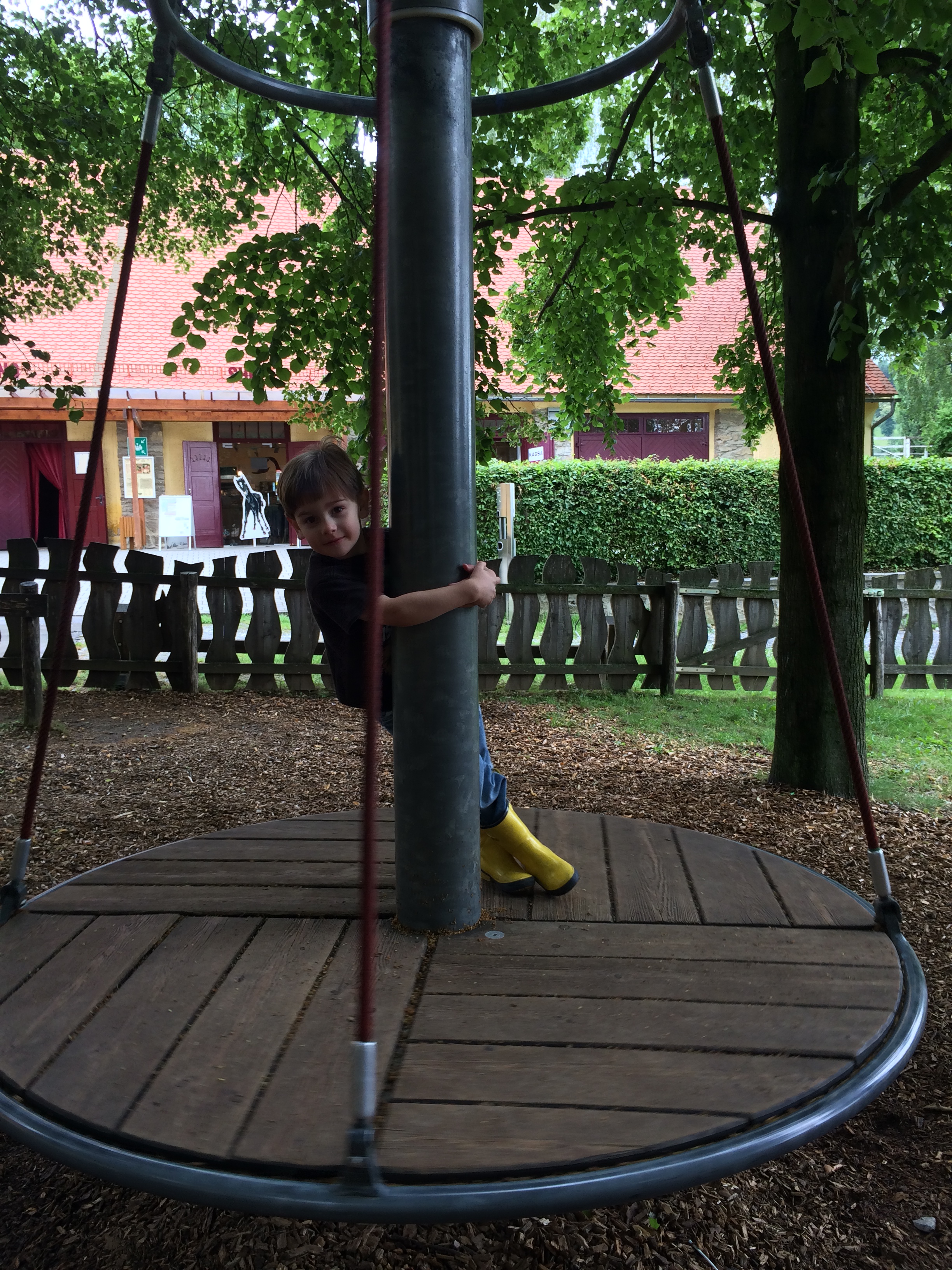 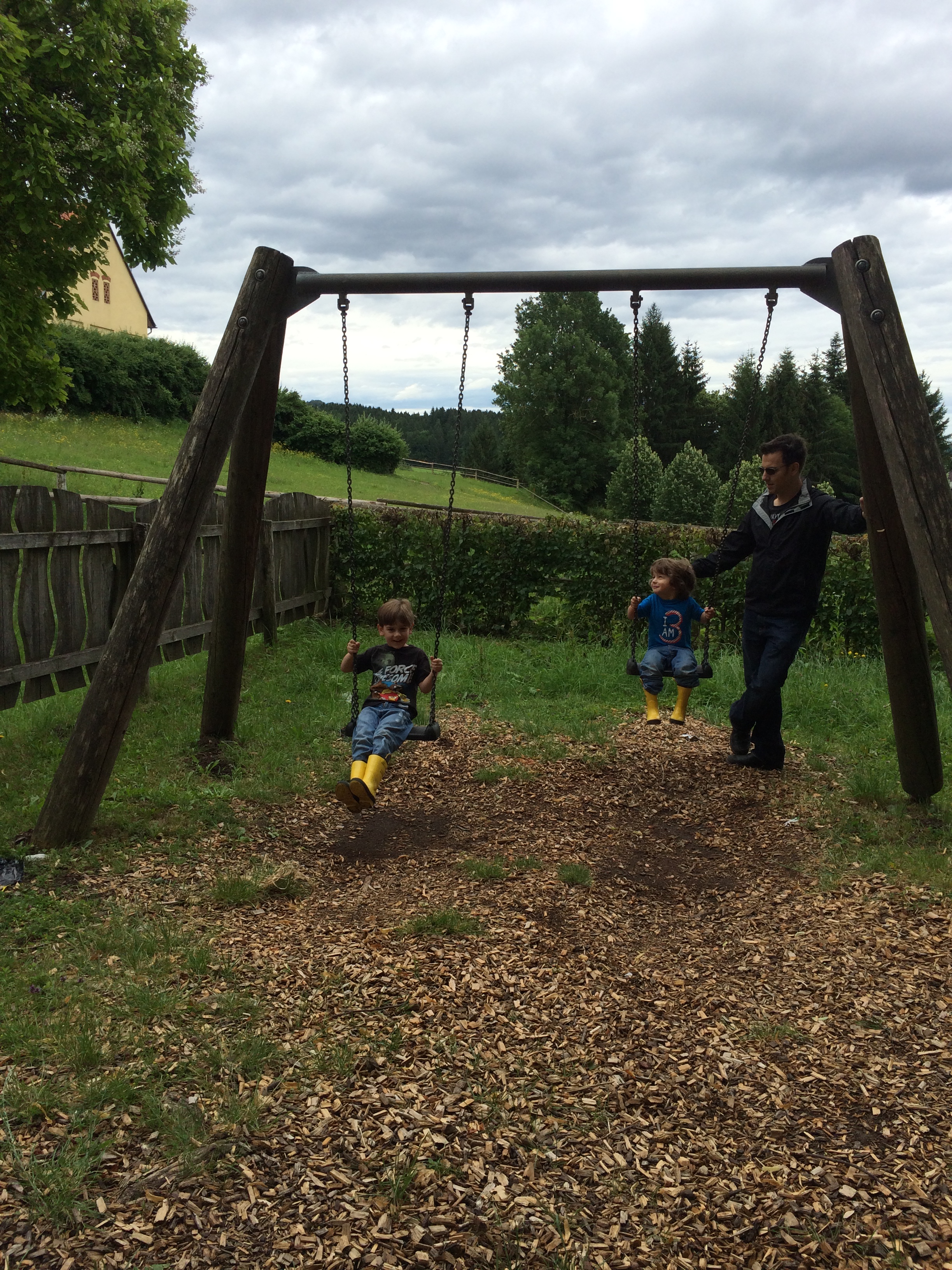 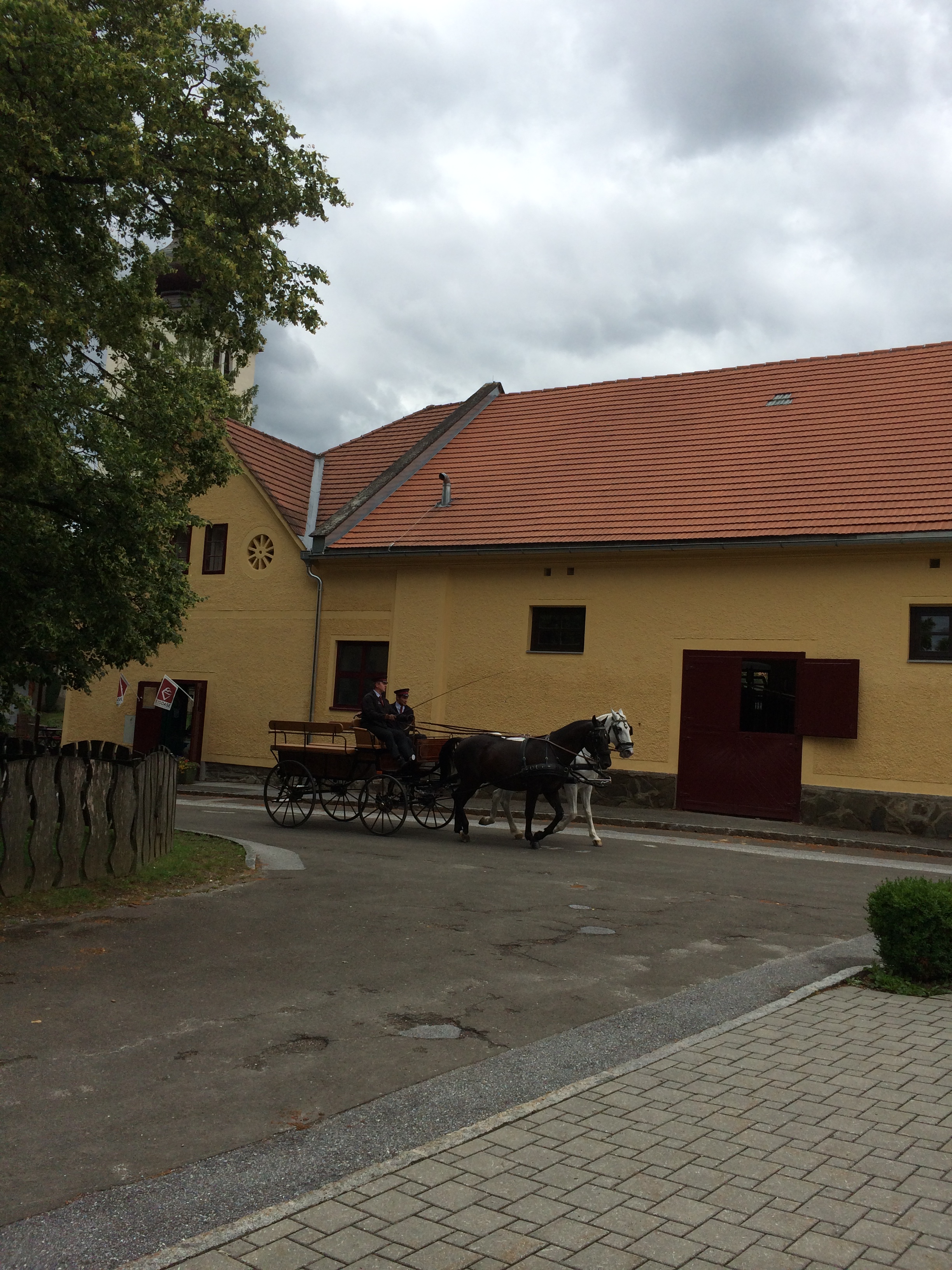 After spending several hours at the stud farm, and seeing all there was to see, we waffled on whether to spend the extra time and money on the other available tour — a visit to the mountain pastures where the young stallions (ages 1-3) are turned out to frolic and roam for the summer.  It was a wet and chilly day, and the temperature was only about 6 degrees Celsius at the mountain pasture, which was also a half an hour drive from the main farm.  But, I figured, if not now, when?  So, we bought our tickets and trekked up to the meeting spot on the mountain.

We ran into a bit of trouble, though.  First, the signs were a bit confusing and just enough different from what we were told to expect that we nearly missed the spot entirely.  Second, there was no good place to park, which was a little confusing.  The directions lead to a gravel driveway on a tiny mountain road, far from anything, and the driveway has a chain and barbed wire across it.  We left the car on a narrow gravel strip along the road.  (t was only big enough for one car, so I have to wonder what they do when more than one family signs up for the tour!)  We weren’t really sure we were in the right place … and of course there was no cell signal, so we couldn’t call and ask.  It was our best bet, though, so we waited at the “meeting point”, as it was called in our printed directions. 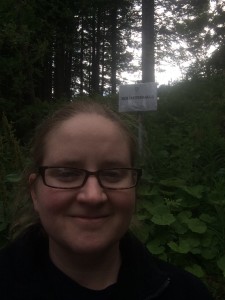 We arrived about 10 minutes before the tour was supposed to start.  Our directions had brought us to this spot, and they had also mentioned that after arriving at the meeting point, we were still a 10 minute walk from the mountain pastures.  So, we waited.  And we waited.  And waited.  In the cold and the wind, on the side of the mountain, with 2 tired kids.  I eventually sent Dan and the boys back to wait in the car.  After half an hour, we had to decide — give up, or assume that our directions were wrong and hike on up the driveway for 10 minutes to see if we could find anyone.

I was determined, and figured we were already invested.  We’d waited half an hour in the cold, and we’d paid for our tickets.  The main office was already closed for the day, and we were leaving town the next morning.  So, it was continue on, or give the money and time up for lost.  So, we walked past the uninviting barbed wired gate and started to climb up the driveway, uncertain as to whether we were even in the right place.

We walked for about 10-15 minutes, very much steeply uphill.  We found a summer camp, and then, a large barn.  We were met by a barking dog, and saw a few people from a distance, but nothing that looked too promising.  Not easily thwarted, we asked (in our sub-par German), and discovered that we were, unbelievably, actually in the right place. 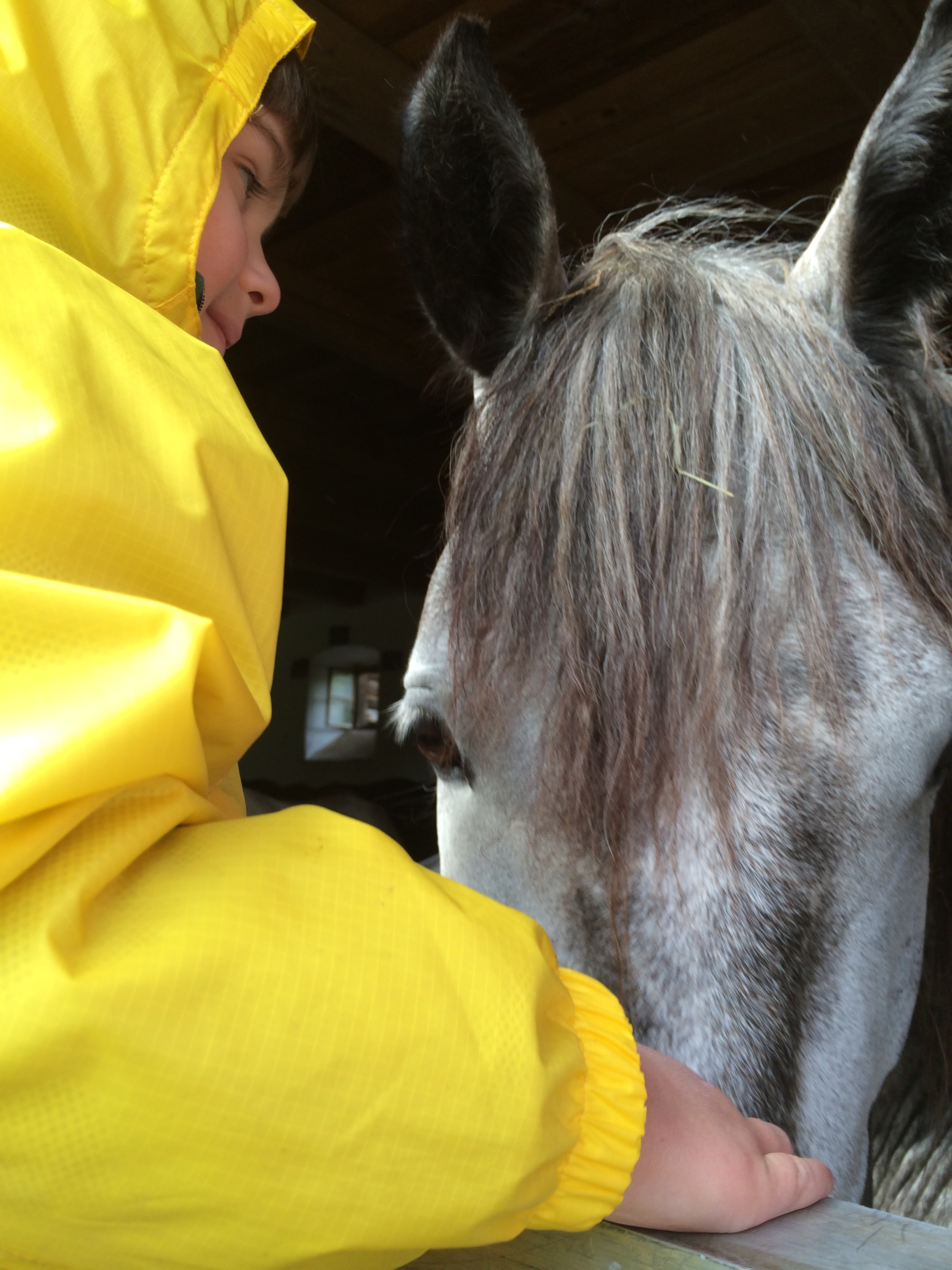 The main draw of the “mountain pastures” tour is to be able to watch the young horses running and playing in relative freedom in the huge mountain pastures.  By the time we arrived, they had all been brought in to a large barn for the night.  So, we pretty much missed the main reason to have gone, and instead, for our ticket price, we got to stand in the cold for half an hour, hike up a cold mountain and NOT see the horses in the mountain pastures.  BUT . . . we did get to visit with the horses for a bit.  The kids were allowed to climb up on the gate and pat the horses that happily came over for some love and attention.  It wasn’t at all the moment I expected it to be, but seeing the boys pat and talk with these beautiful horses, some of whom will be performing around the world in a few years, was pretty special.  (B in particular was truly captivated.  The horses’ caretaker even commented that B had the “spirit” of horses in him.) 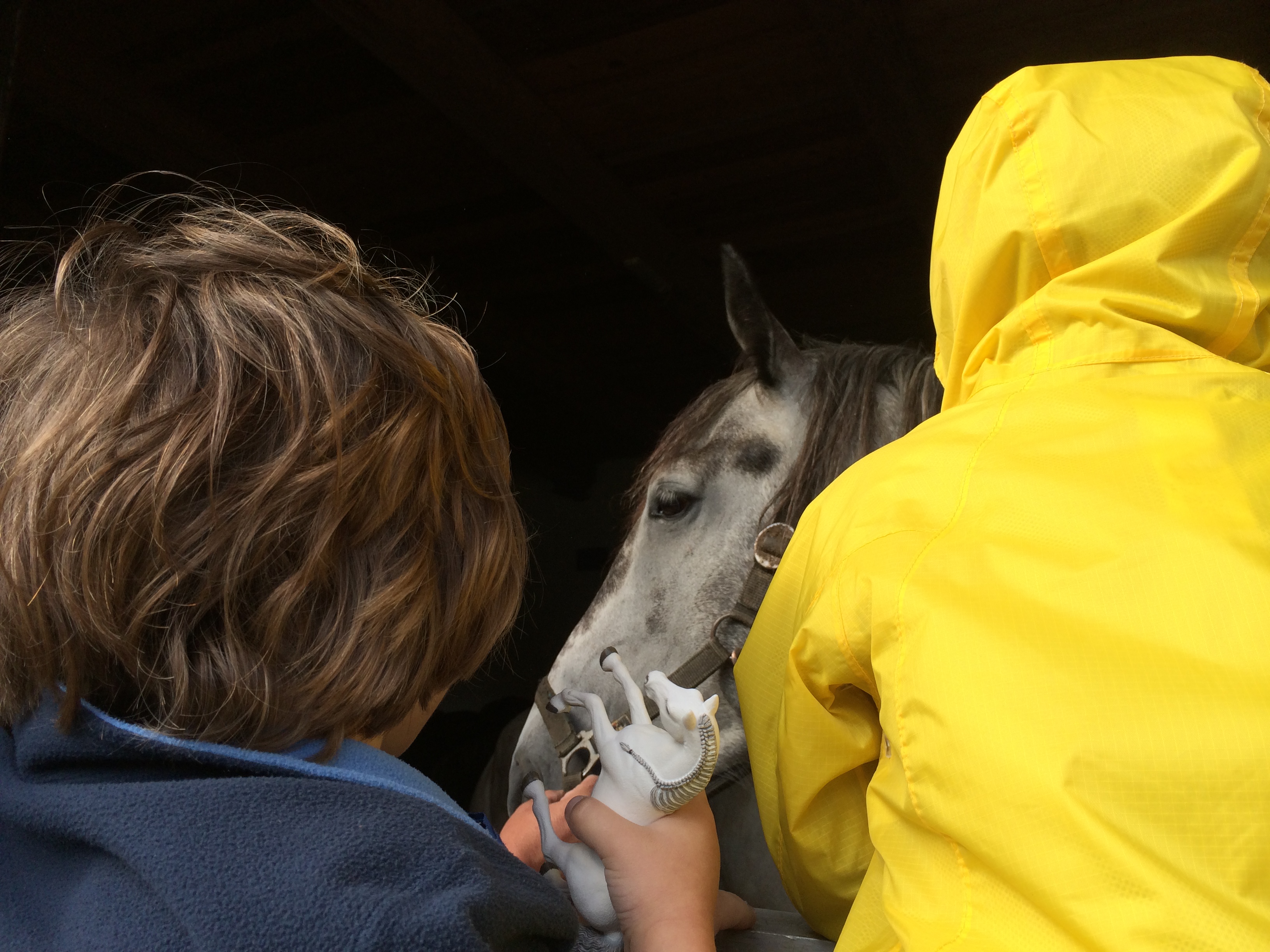 After a little while, we trekked back down the mountain and managed a much needed and very hectic 6 minute grocery shopping trip (we got there just before closing) — extra impressive in an unfamiliar store.  What a day!

It was great to visit with the horses at Piber.  It was pretty cool to get to spend some time with them up on the mountain, too, though not exactly what we signed up for.  But we’ll certainly never forget it.

For anyone who reads this who is thinking about going — I would recommend the whole thing — the stable tour and the mountain tour.  Just know that the English directions are wrong.  The place that you’re told to “meet” is not a meeting point, just the end of the driveway you’re meant to walk up.  Don’t wait — no one is coming.  Just walk on up and see the horses.  Take the driveway all the way to the end — past where it looks like you’re supposed to — and you’ll get there. 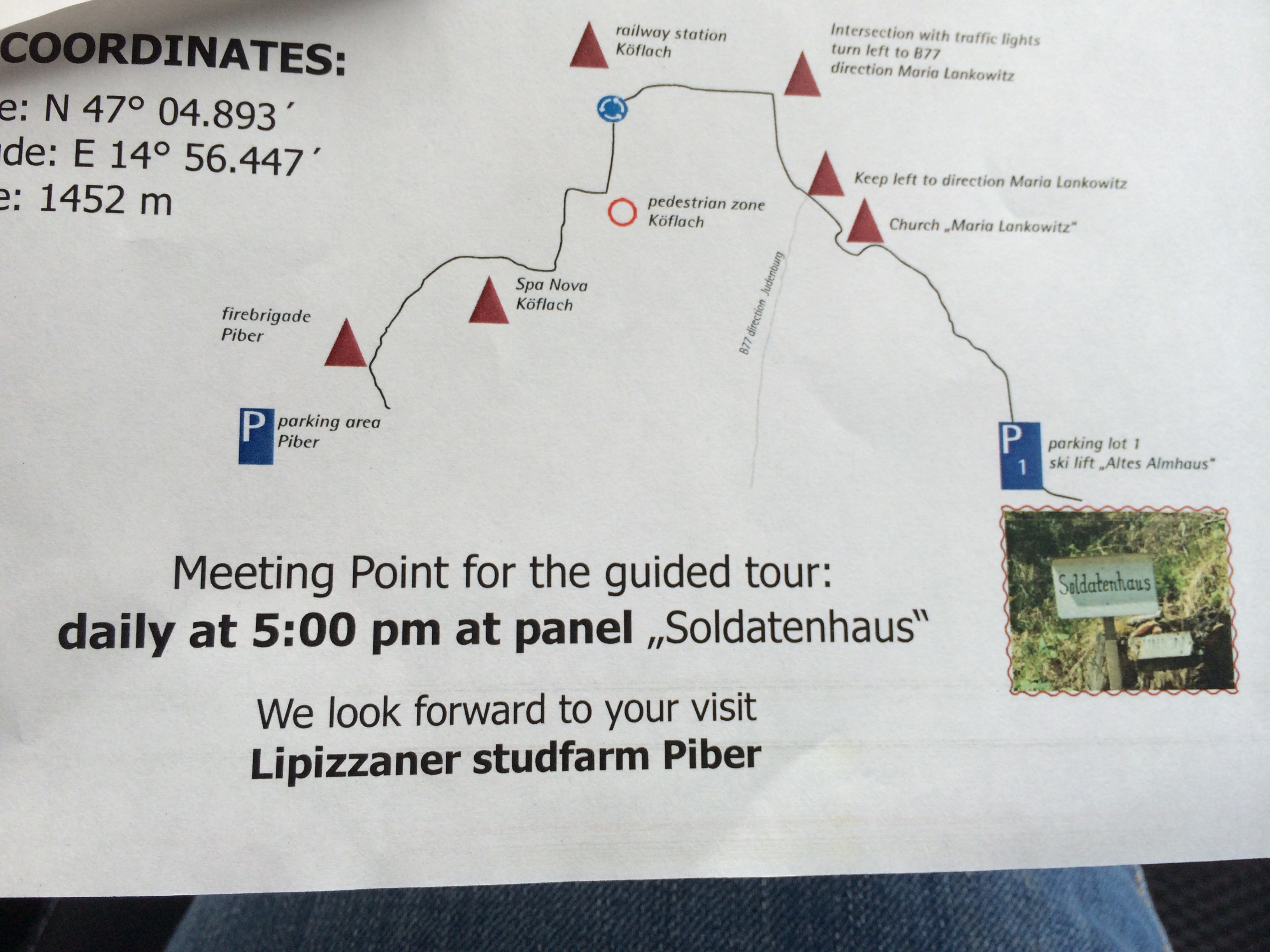 The directions we were given . . .