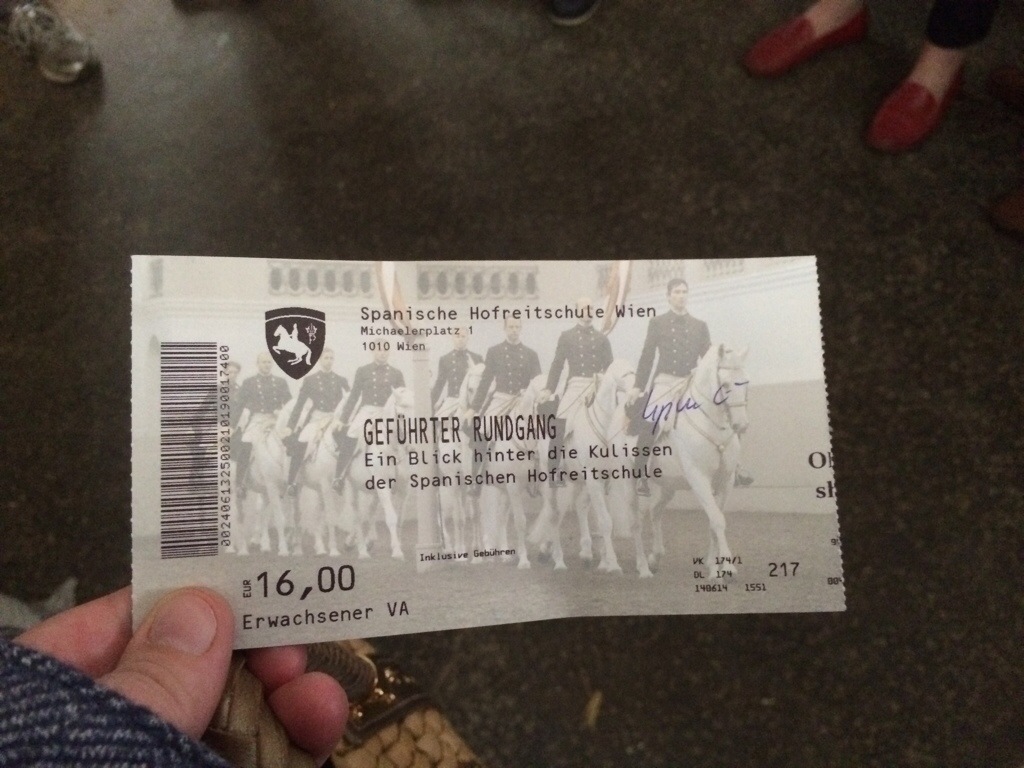 There are only a handful of things left on my wish list of Vienna experiences for which I would kick myself if I didn’t do them while living in Vienna.  But, until last weekend, one of the biggest ones was still on that list.  Before I moved to Vienna, I saw a performance of the world famous Lippizaner stallions once when they toured in the US, and I saw a performance at the Spanish Riding School here in Vienna when I came to visit in 2010.  I’ve walked past to see them being cared for in their stables and visited the mothers and foals during their summer turnouts at the Burggarten.  But, as a lifelong horse lover and equestrian, I really wouldn’t have wanted to miss the “behind the scenes” stable tour. 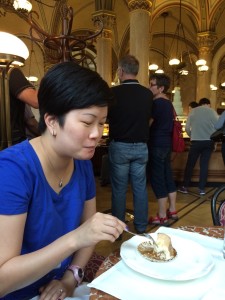 My friend, Elaine, was kind enough to join me — these things are always more fun with a friend, and though the kids are technically old enough for the tour (no children under 3), I didn’t think they’d enjoy it, so we left Dan with the kids and had a grown up afternoon (which is an exciting enough prospect for me, with or without major equine celebrities).

We started with a stop for soup, cake and coffee at the iconic Cafe Central, which was truly lovely.  (Seriously, the Viennese know how to make a piece of cake.)

But after that, we were on to the tour!  (In English — there is also a German-language tour.)  There was some kind of construction going on, so apparently our tour didn’t follow the typical route, but that was ok with me, because we got to start with the very best part — the horses themselves.  We weren’t 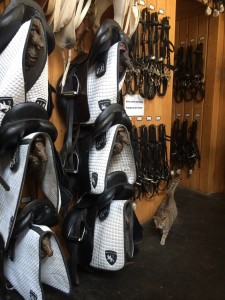 allowed to take pictures in the stables, which was a shame, because the horses are all so beautiful.  We couldn’t pet them, either (for safety reasons) but we were right in the aisle of the barn, peering into the stalls.  Our tour guide gave us lots of information — I was the obnoxious person who knew all the answers to the questions that the tour guide asked.  But although I knew the significance of having a bay horse in the barn (for good luck) and why each horse has two names (each horse’s name follows the same convention — they’re named after their father and their mother), I did actually learn a lot, even while being distracted by visiting with the beautiful horses.  I learned that the horses work for 2 months and then get 2 months off . . . plus vacations.  I learned that each horse has only one rider and that each horse only knows one of the advanced moves for which the Spanish Riding School is famous.  I now know that although the 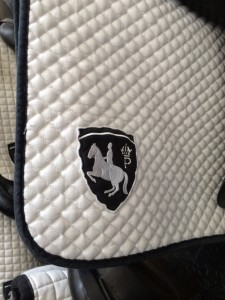 vast majority of the horses are “white” (actually light gray, and they’re all born dark — that part I already knew), they used to come in many different colors until one of the Austrian emperor decided he preferred the white and bred them for that trait.  Now only about 1% of Lippizaners stay bay as they grow.

After ogling the horses for a while, we moved on to the tack room, which was not quite as thrilling as hanging out with the horses, but equally fascinating.  We saw the racks of practice and performance saddles and bridles, and learned that you can predict whether a horse will do one of the “airs above the ground” in a performance based on the color of the saddle pad he wears.  We learned that the performance saddles are individually made for each horse in Switzerland out of buck leather, and that they’re very expensive.  And we saw an enormously fat cat. 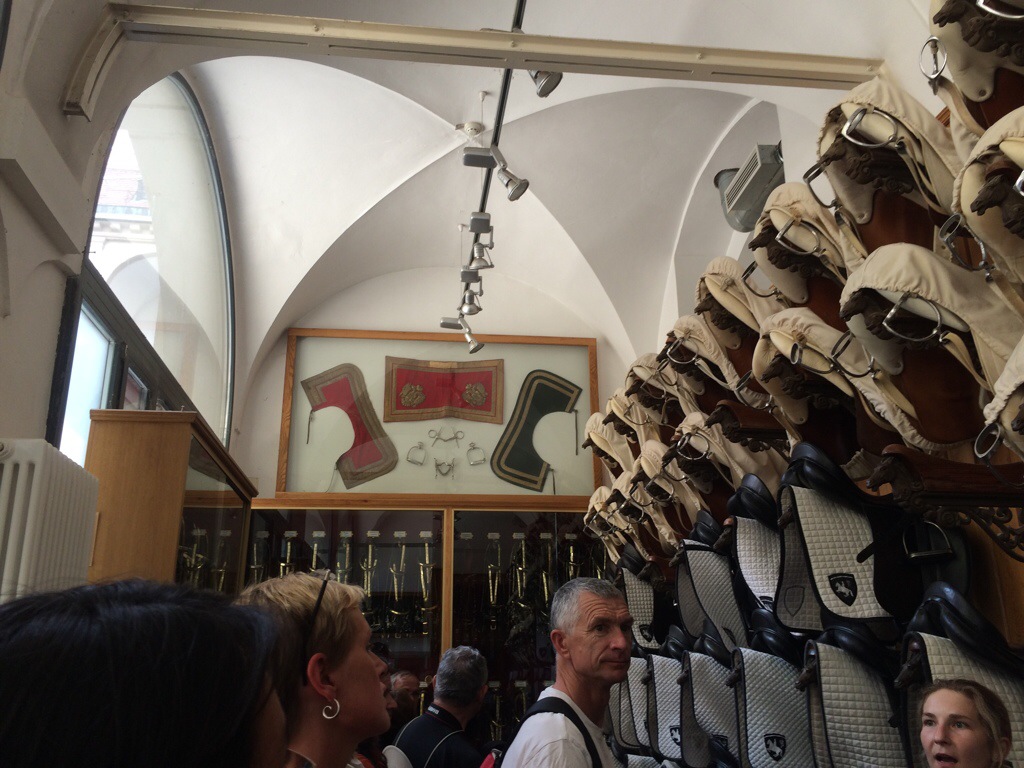 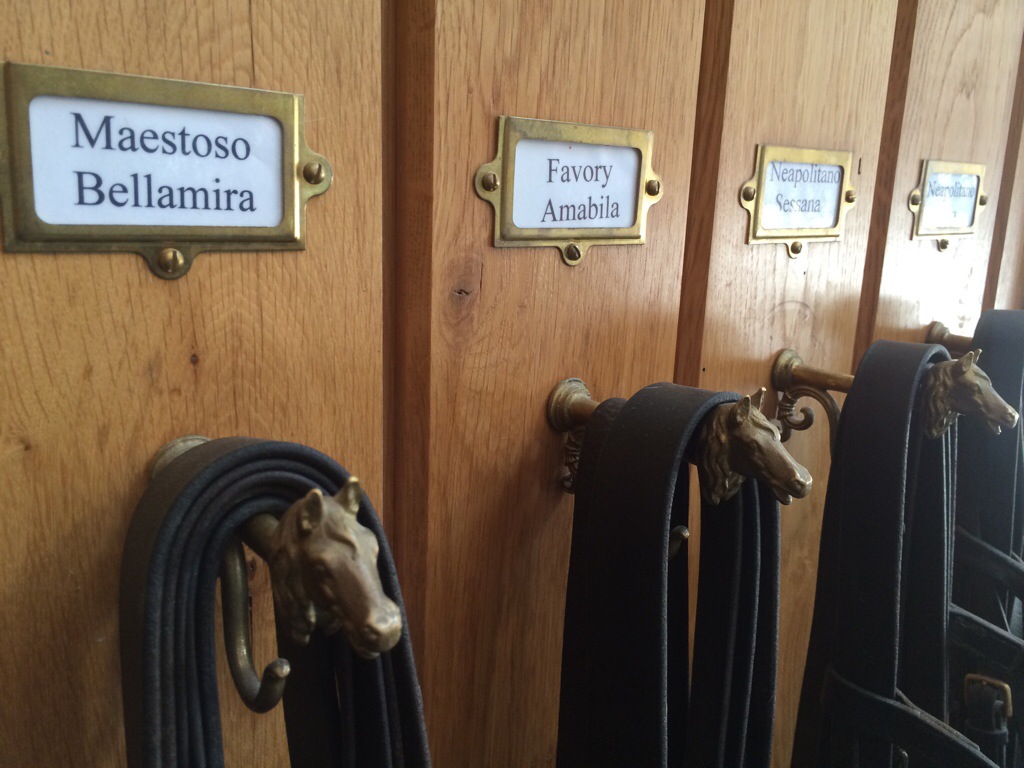 We finished our tour with a stroll through the courtyard and past the world’s largest automatic horse walker on our way into the Winter Riding School with its fantastically elegant chandeliers.  There, we learned more about the process of becoming a rider for 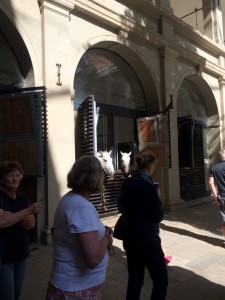 the Spanish Riding School — including that strong riding skills are not a prerequisite and that they accept only about one rider per year (fewer than .3% of the applicants) even into training — and the first two years of that consist mostly of cleaning tack and horse stalls.

It was great, and absolutely worth the €16 for the tour.  I did get the impression that our guide was a little out of sorts due to the change in routine caused by the construction, but I wasn’t able to get an answer when I asked what was different about the tour we got.  Regardless, I am so glad to have been able to go, and really grateful for Elaine’s company (and her patience with my constantly whispered commentary).  I had such a good time that I may just have to go back again to see the “regular” tour! 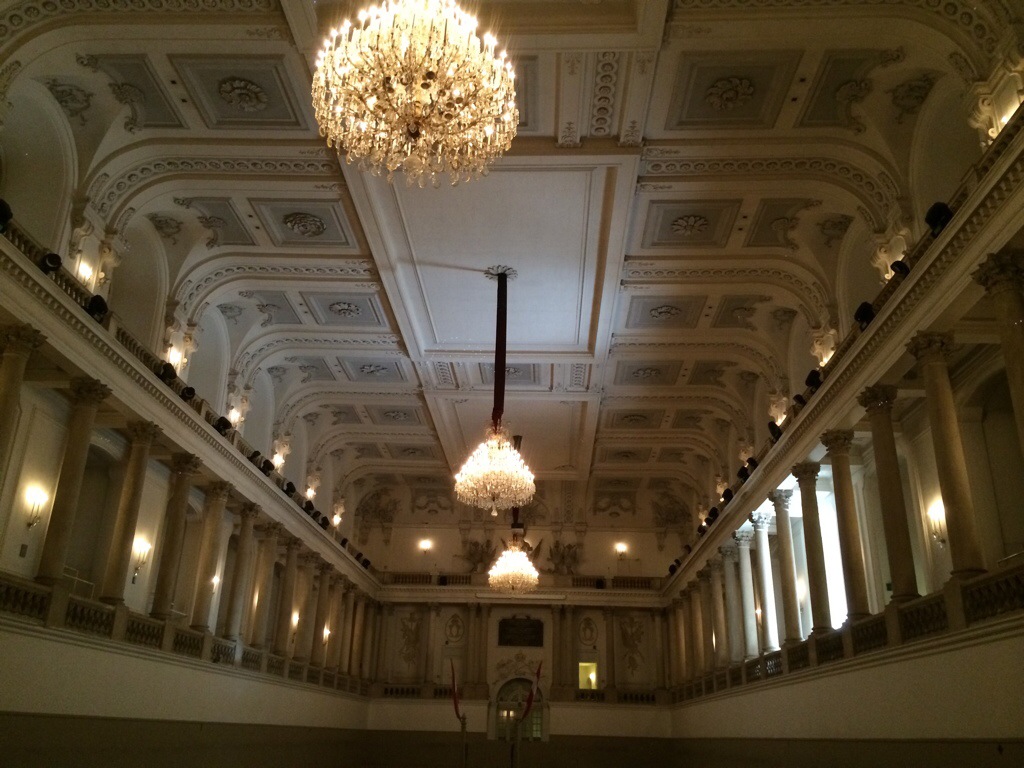