I’m picking up again on the missing pieces of last year’s summer vacation (my goal is to finish these stories before this year’s summer vacation … which is in 2 1/2 weeks, so I wouldn’t count on it).  The next major part of our trip was our time in Ireland (including one of my favorite days ever in my life so far), but there are two little pieces of the trip in England that I’ve missed, so I’ll share them here.  (Looking back, I realize that there are actually LOTS of little pieces that I missed — the day we spent in England getting lost on purpose, dipping our feet in a lake and wandering through an unfenced field of free range sheep; the sheer entertainment of literally not being able to understand anything a native Glasgowian said at full speed; the pleasant afternoon we spent wandering around Fort William in Scotland and shopping for Scottish shortbread.  I’m sure there are more.  I’m a little horrified at how many little moments never made it to the blog, and which now probably won’t because I’m already struggling to catch up on this trip . . . 10 months after we took it.  I think I’m going to have to rethink this idea of not blogging on vacation.) 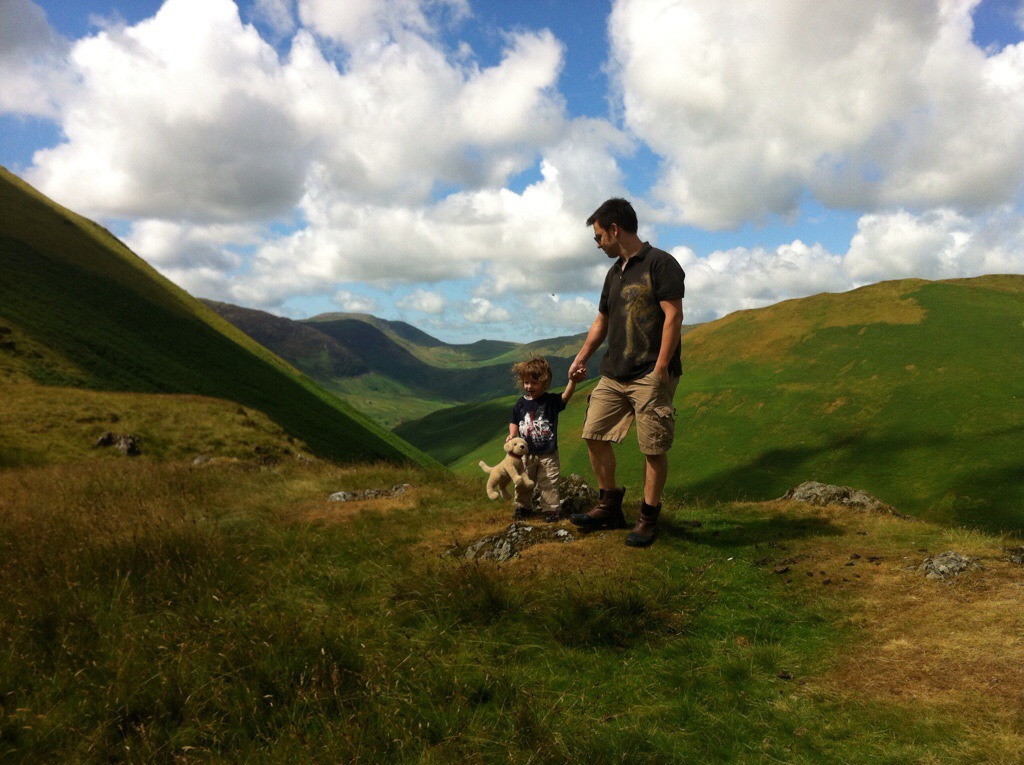 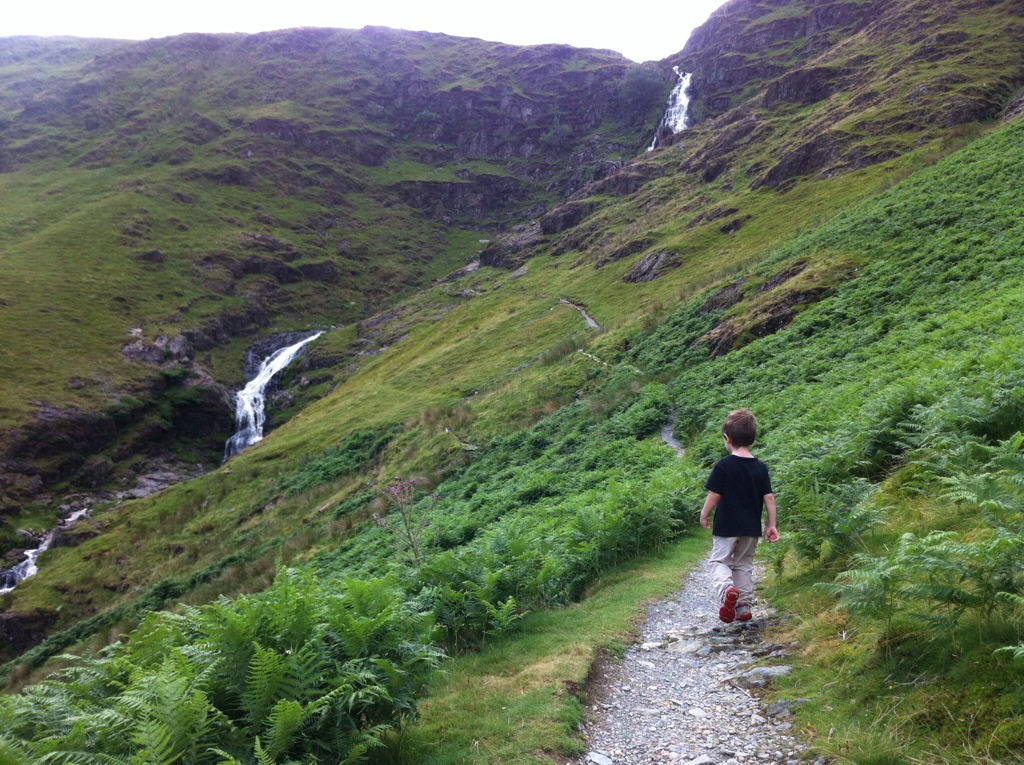 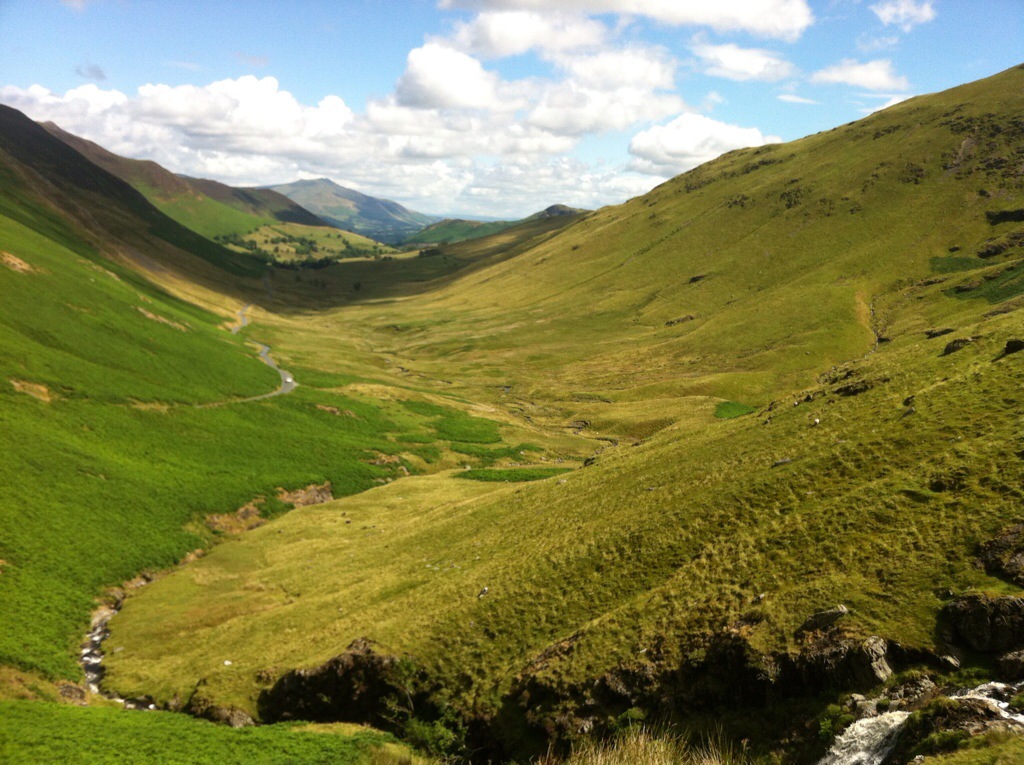 I don’t know how I missed writing about these particular moments.  (Chronologically, this piece goes between here and here, more or less.)  Our first time in the Lake District, we had an unfortunately early end to a drive we were taking when we got a flat tire.  We’d been in the process of driving a long loop through parts of the less crowded 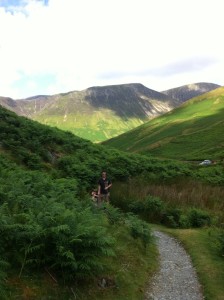 north and west of the Lake District (the route came from Rick Steves’ UK guidebook).  I really wanted to continue and finish the tour, since we’d loved the first part (pre-flat) so much.  The landscape was just beautiful, and we’d had great fun making an impromptu stop along a lake.  So on this second trip, we bravely set off again.  This time, instead of stopping for a wade in a lake, we stopped for a quick hike at the top of the Newlands Pass.  We worked our way up the narrow track until it became too muddy and slippery, and we had to turn back.  The boys were impressively enthusiastic about it, though — I think they would have climbed to the top of the waterfall if we’d let them!  We continued our drive around the loop, passing (with crossed fingers) the scene of our flat tire last time, and found ourselves a little place to stop for lunch, with a yard full of toys for the kids.  It was one of the few times I can ever think of that we’ve been able to sit outside in the shade and enjoy a meal while the kids played mostly independently.  The boys stopped by every so often for a quick bite of a sandwich, and then were off again to play some more. 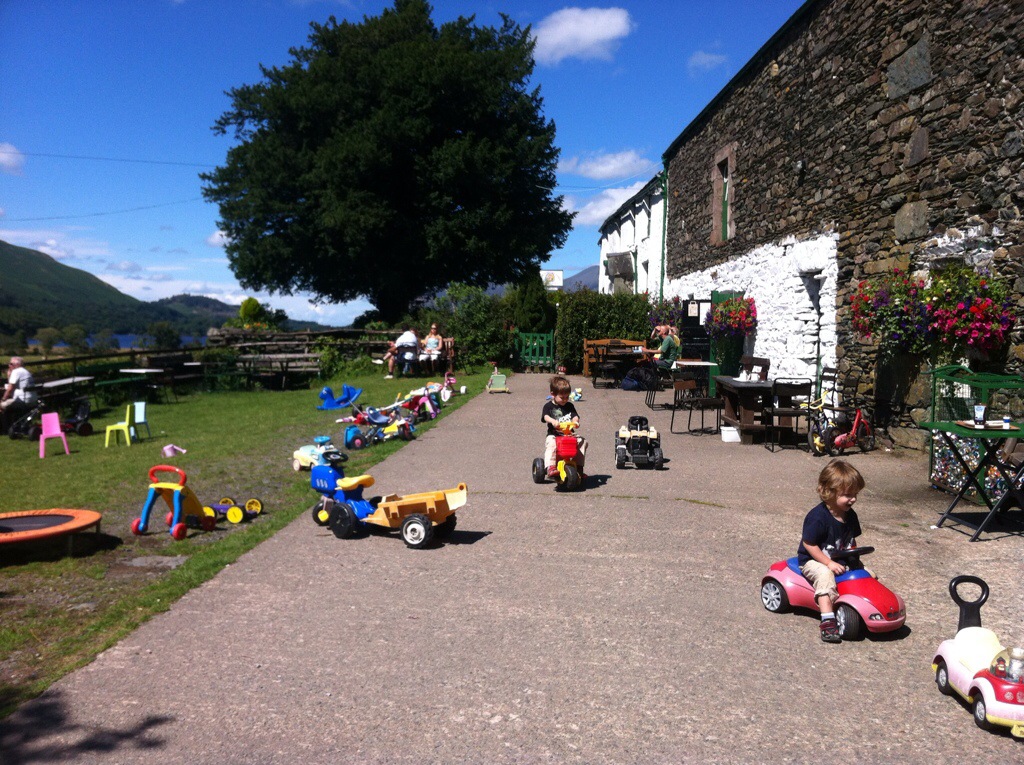 After lunch, we diverted from the path to try and find a river swimming/wading/splashing spot recommended by our innkeepers.  We did find it, eventually, after driving down a muddy and rutted path that may not have been intended for cars and which was well marked with “no trespassing” (the problem was that once we started down, there was nothing to do but continue), and at whose end Benjamin refused to leave the car (Liam and Dan did enjoy a bit of splashing time, though).  After that, though, we were all very worn out, so rather than finish the loop, we returned by the direct route to the inn for a nap, some tea, and a walk to feed the resident donkeys (which ended in a sprint home to beat the impending rain storm). 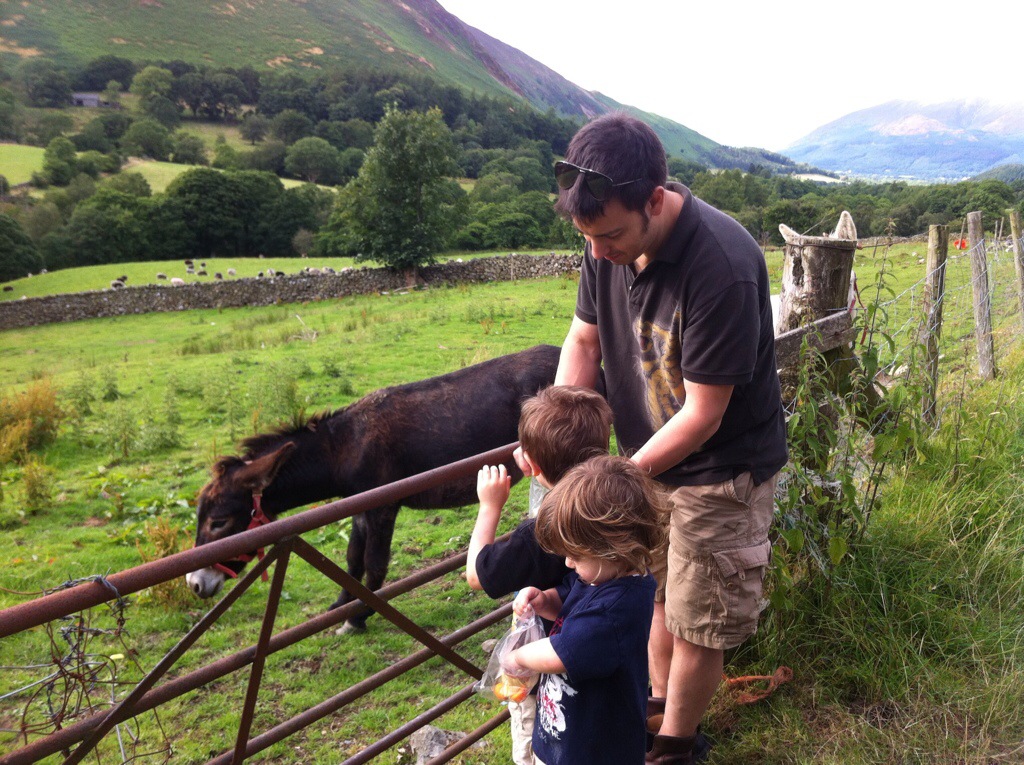 If at all possible, though, I really wanted to finish the loop, because we’d so enjoyed all the pieces we’d explored so far.  But, we were fast running out of time in England.  On our last full day in England before we drove north to Scotland, it was rainy and chilly and kind of dreary.  In the morning, we’d been to the Castlerigg Stone Circle (so, chronologically, this bit should go between here and here).  But it was still early in the day and we wanted to explore a bit more.  So, we drove out and again picked up the loop roughly where we had left off, and continued our exploration.  We took a side trip up the “hill” (they have impressive hills in this part of the world) away from the lake.  It was a steep and narrow journey which first brought us to a tiny stone bridge over a roaring creek and then, suddenly, around a corner to an amazing view of the lake (Derwent Water) below.  That vista alone was well worth the journey. 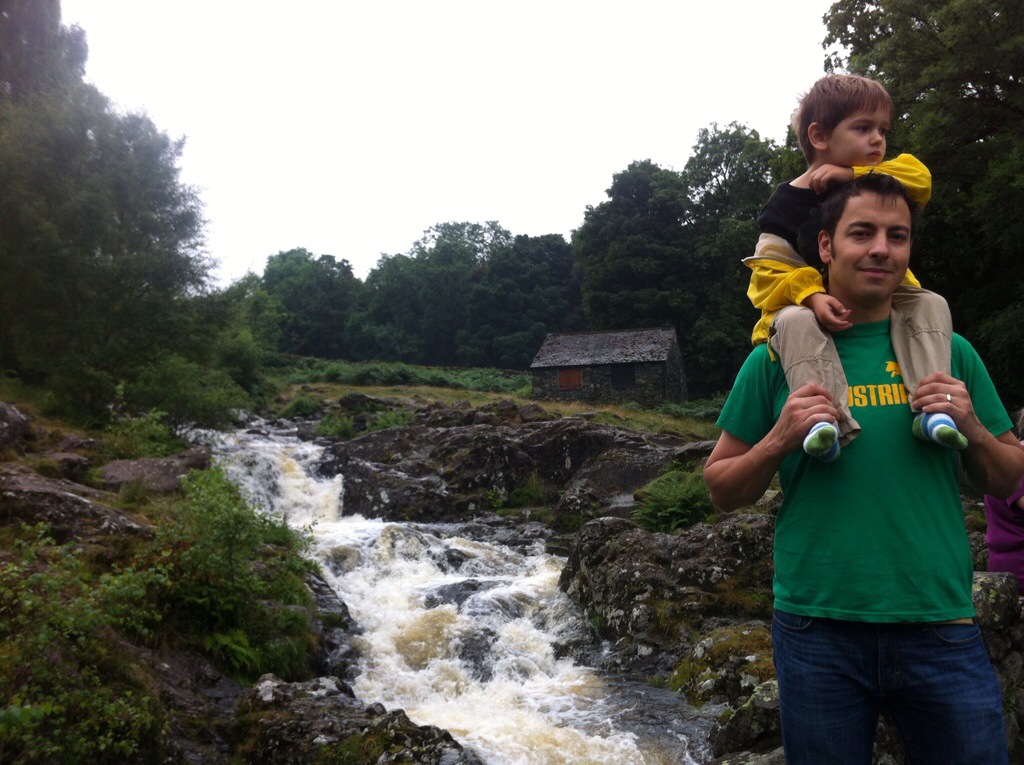 We continued on to the surprisingly remote and tiny town of Watendlath, high up in the hills, but with a lake of its own.  After our journey up into the hills and then back down to the lakeside, we did, finally, finish the loop we’d been working on over two summers. We finally finished the whole “hour-long” drive.  It only took us a year. 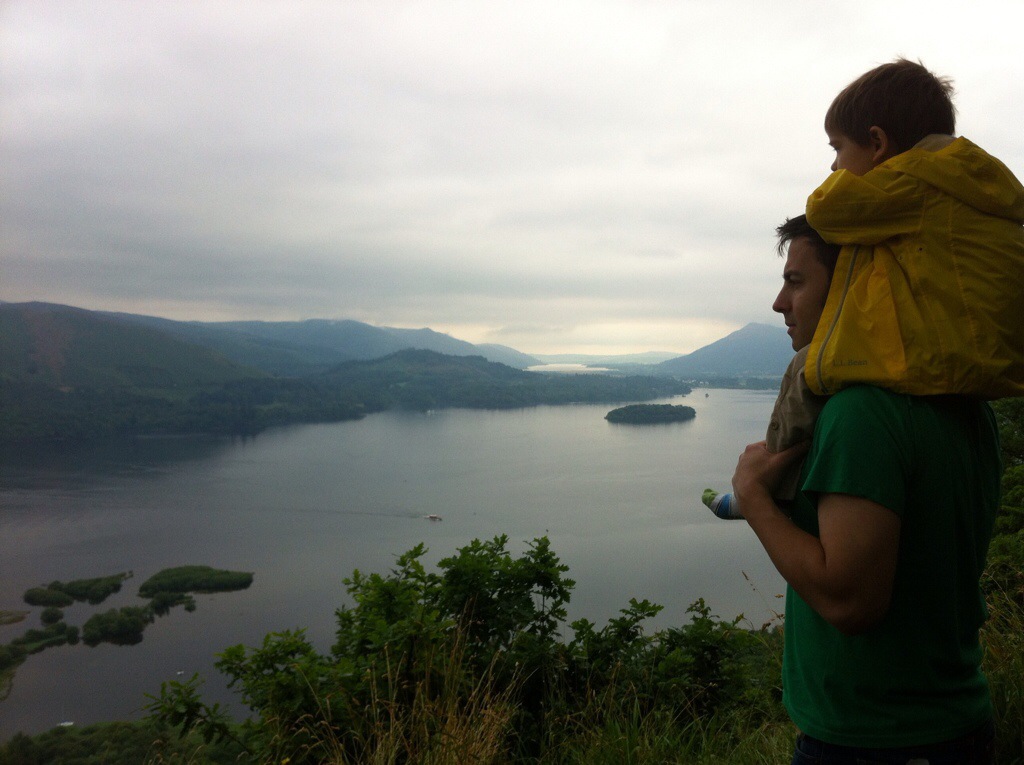 5 thoughts on “Closing the loop”