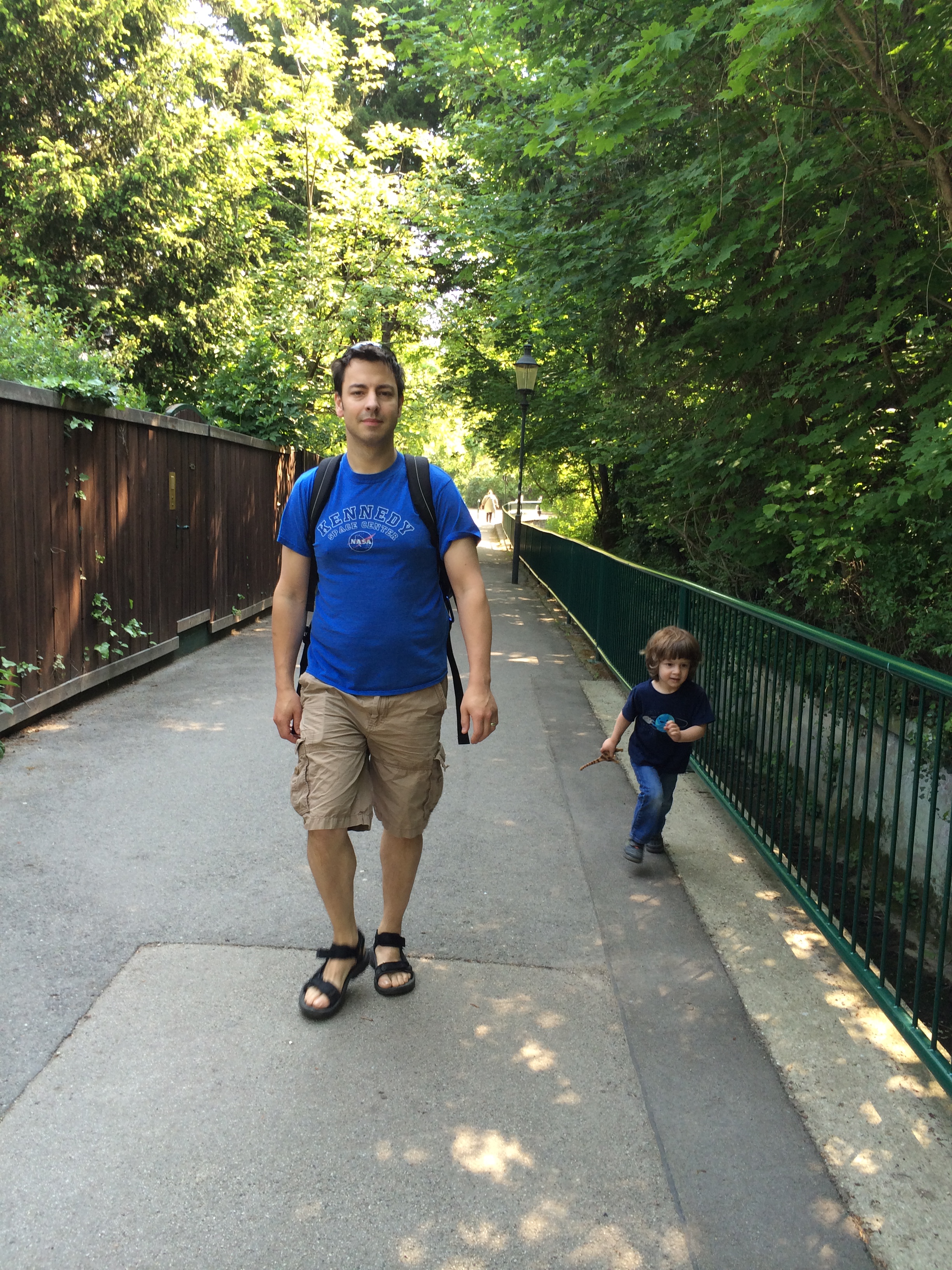 I’d been out there before, several times.  Enough that I no longer really remember the chronology.  I know that the first time, I couldn’t quite get from where I started to the trail with the stroller, so I spent an hour or so trying to find a way around.  And then when I finally figured it out, it was time to go back home again.  I know I went out there at least once when Jo was with us.  And I’m pretty sure I’ve been at least one other time, but that’s where my memory is less clear.  I could have sworn I’d been out there at least once with Dan and both of the kids, but he says he’d never been before.  I’m not sure.  But I do know that each of the times I’ve been before I’ve basically walked back and forth over the same mile of the 7 mile loop.  I’ve walked just far enough to arrive at the first of the vineyards, and then turned around.  Each successive time, I’ve actually made it one vineyard further along the trail before I turned around, but I’ve never made it very far. 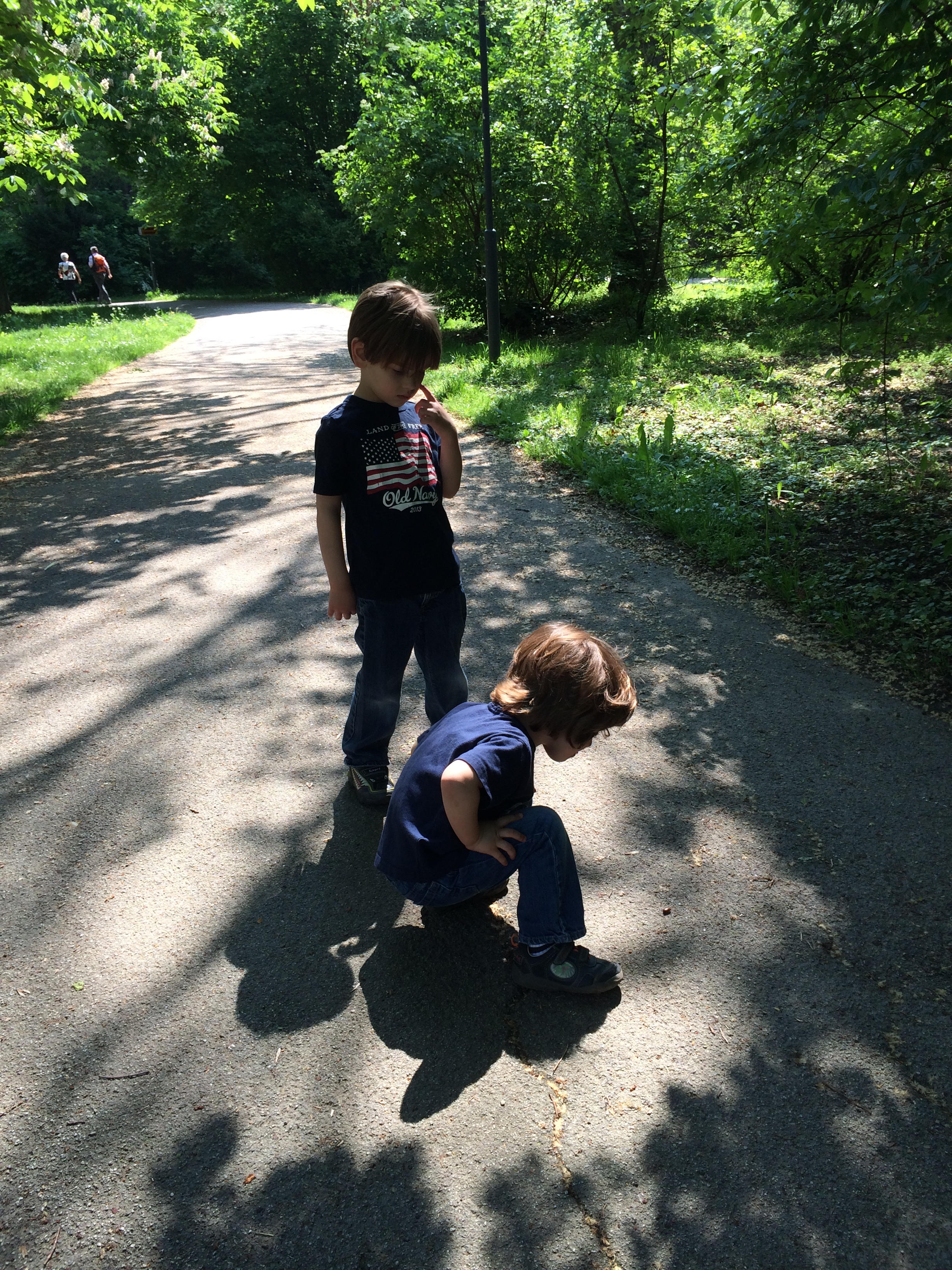 I love to walk and to hike.  I love to explore and to see a place on foot.  (On horseback is even better, but I haven’t had that chance for a few years now.)  It’s truly something I enjoy.  And Vienna understands me.  The city has 11 signed and maintained hiking/walking trails throughout the most scenic parts of the city.  Each is 6-10 miles long, none is completely stroller friendly, and since they are in scenic places, they also tend towards being quite isolated, so I’ve never gone far on one alone.  So, though these are exactly the kind of thing I’d love to explore, we’ve only done little pieces of 3 of the trails. 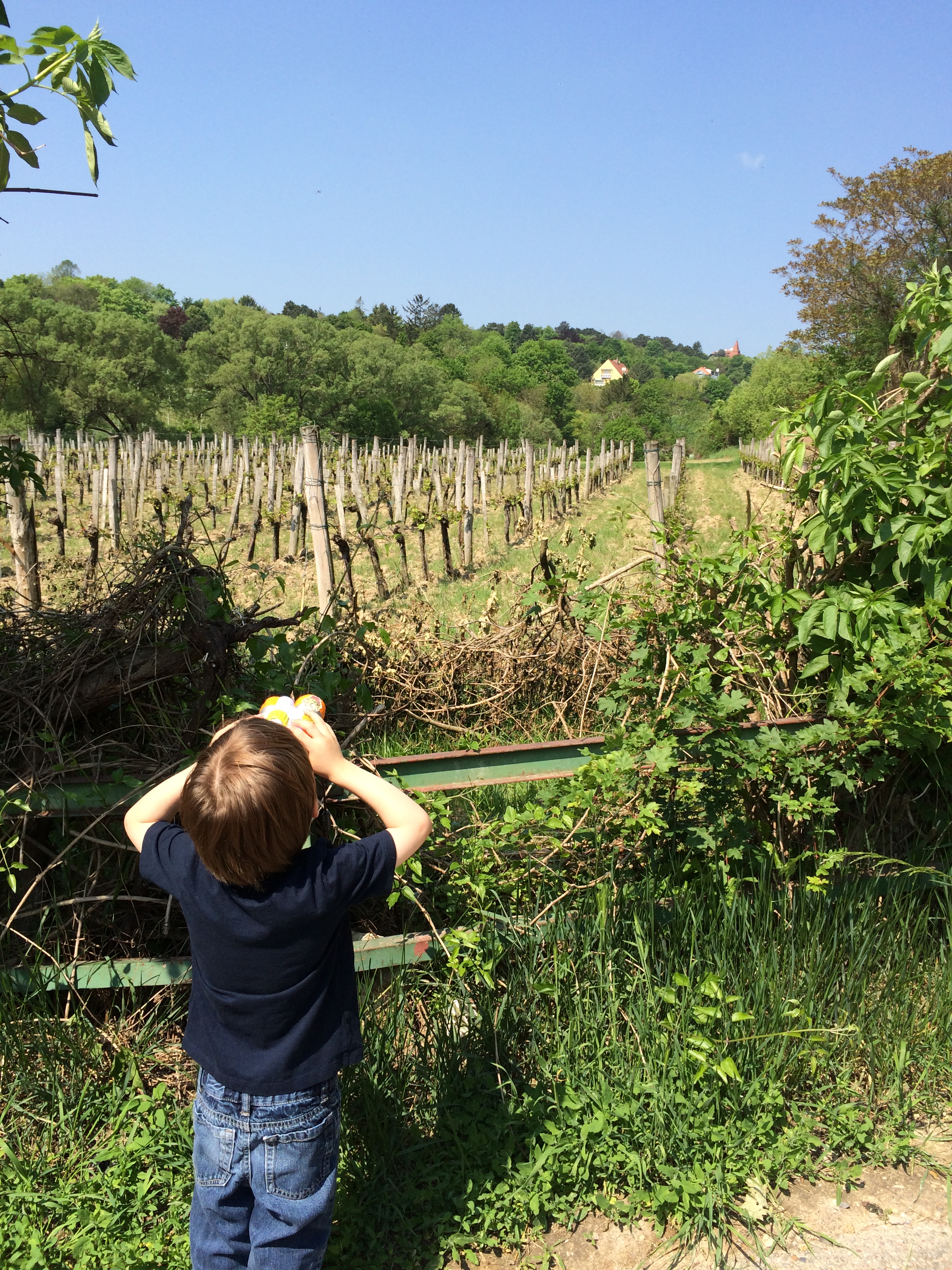 This past Sunday was my turn to choose a family activity, so I decided to try for another piece of the Stadtwanderweg 1 (city hiking trail 1) — the one I’ve visited most often.  I had no illusions that we’d complete the whole thing, as it’s about 7 miles long.  The purpose wasn’t to complete the loop, but to go further than I had before.  We put on our sunscreen and our sturdy shoes, packed a picnic and headed out.

It was a lovely walk, with (as I’d seen before) some lovely views of the vineyards of Grinzing.  The kids were fascinated, at first, by every flower and bug, but after the first mile they became fixated on lunch instead (though it wasn’t yet 11).  It turns out that the section of trail I had chosen was almost entirely uphill, unfortunately.  We hiked a couple of miles before finding a suitable picnic spot, and the tentative plan was to turn around after that and head home.  I had covered 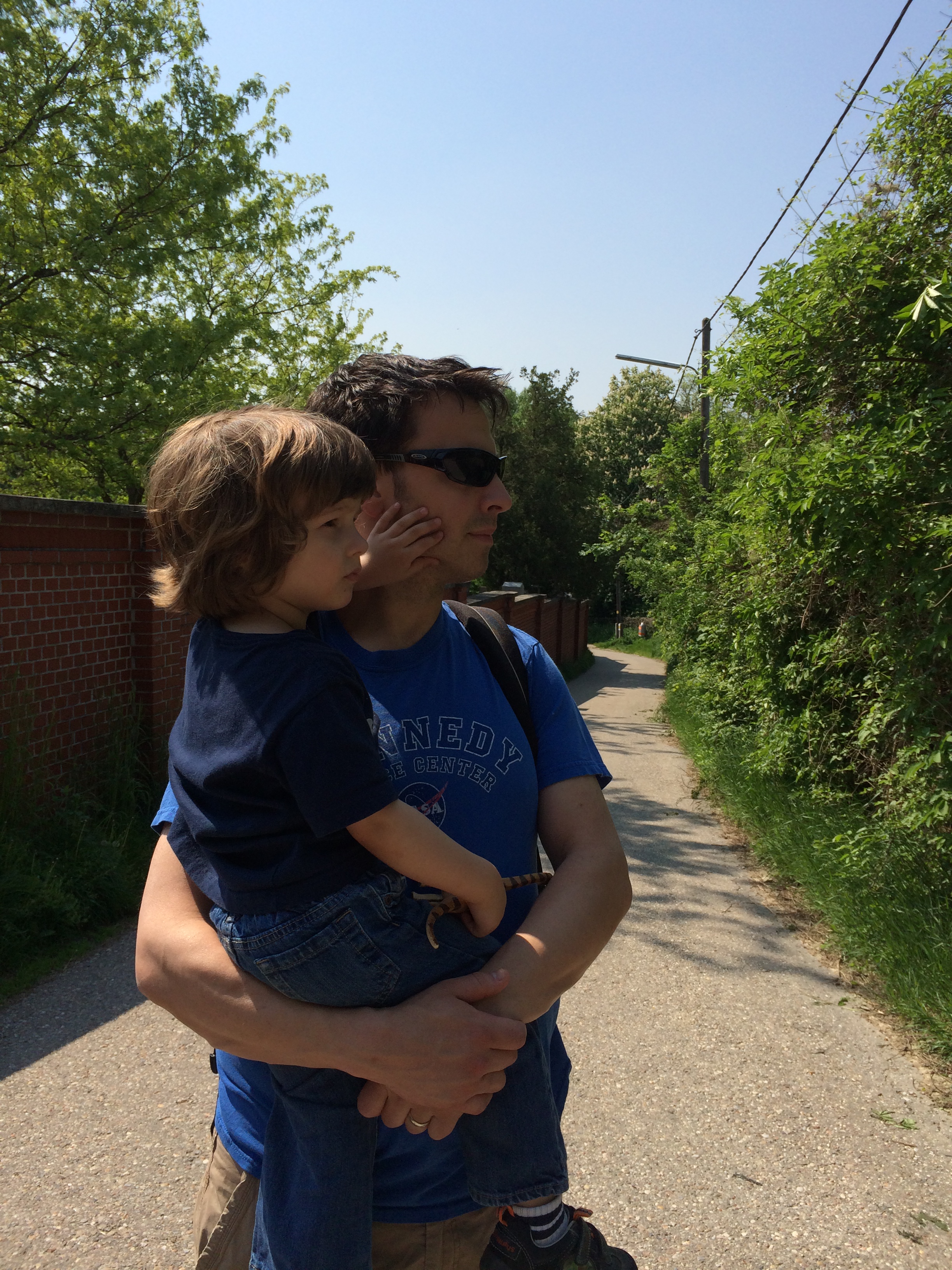 almost a mile of new trail, the kids were happy to have had a picnic, and we all still had a bit of energy left.

Looking up the bus routes on my phone, though, we realized that it would be a much shorter, though more uphill, walk to the bus to continue along the trail.  And it also looked like there might be a restaurant up ahead, which might serve the ice cream Liam was really hoping for.  So we continued.  And though the walk got lovelier, and very shaded as we went truly into the woods (except for one section where there had been some logging), it also got steeper and rougher.  Less than an hour later, hot and grouchy, we did eventually pop out of the woods.  We found ourselves right at a bus stop (closer than the one on my map) AND at the foot of a driveway to a restaurant which served ice cream.  So, after our 4.3 mile trek, and over 2 hours of walking, we headed home.  It was a tough adventure, but a good one. 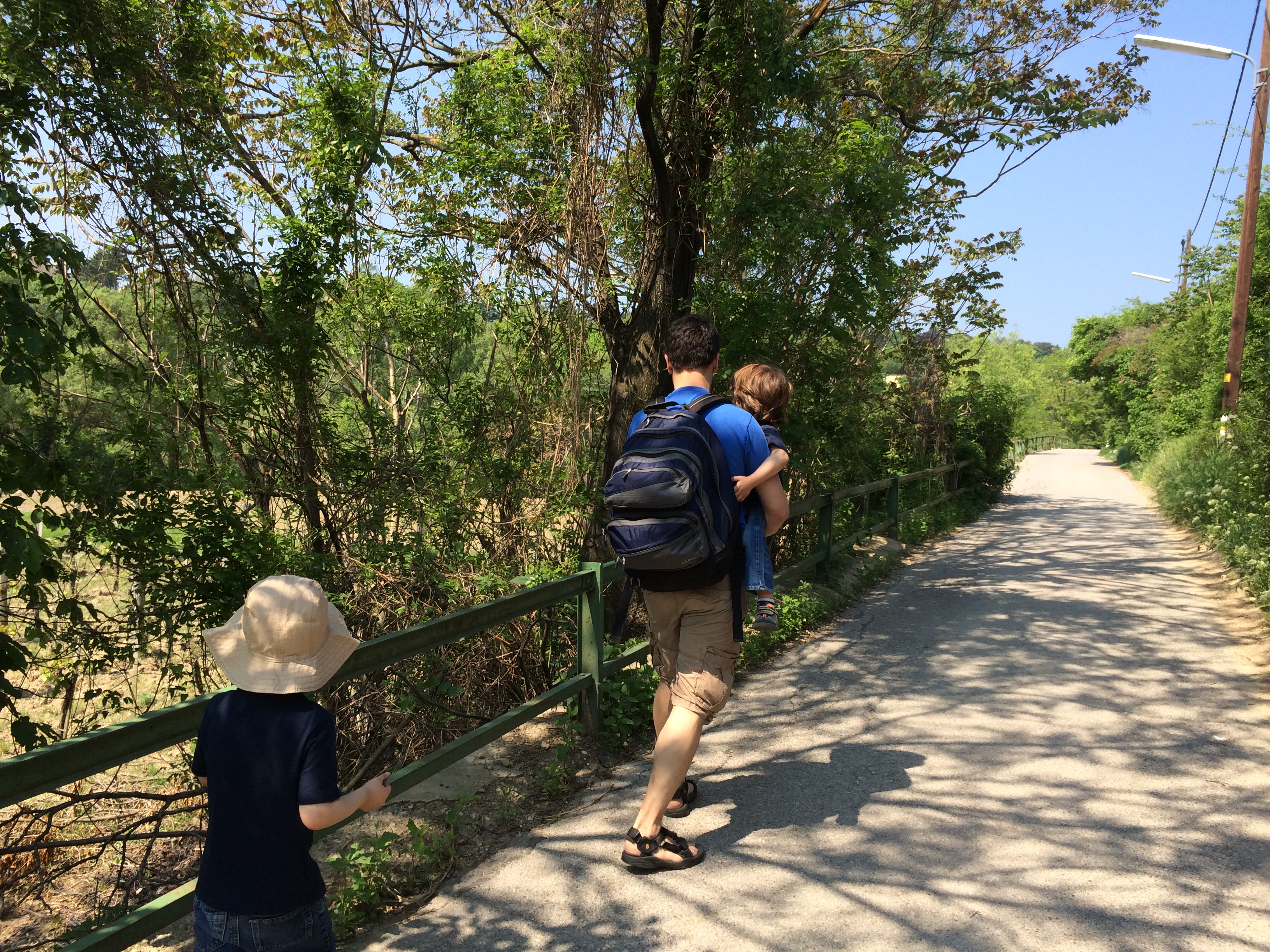 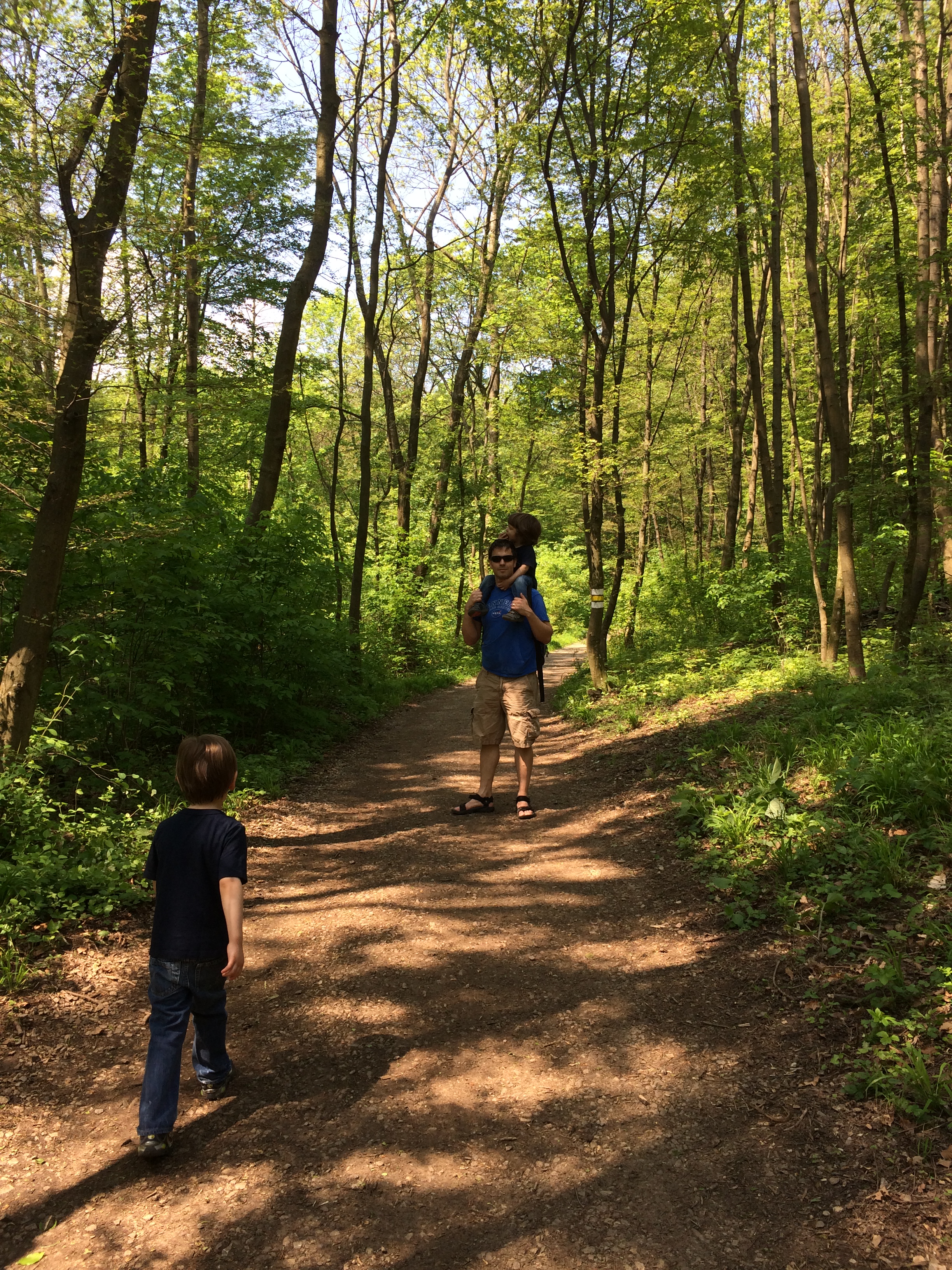 And now, for next time, we know exactly which bus stop to head for in order to pick up the trail for the next (almost entirely downhill) section.  We may complete the first trail one day after all.

(As a note, though we did fine, I wouldn’t really recommend this part of the trail — clockwise around from Nußdorf to Sulzwiese — to families with small kids unless you have a very sturdy stroller or are prepared to carry the kids a lot.  We carried our boys most of the way.  It’s not an unpleasant walk at all, but it is long and truly almost entirely uphill.)