We’ve been living abroad, here in Vienna, Austria, for 3 years now, but there are still SO MANY little day-to-day things that can be a challenge.  It’s these little everyday things that can trip me up the most.  My mom has always told me, “You don’t trip over Mt. Everest”, and she’s right — I am usually prepared to handle big things, but the little things can easily make or break my day.

I think, as with so much that I’ve learned while living abroad, this has always been true, I’m just more aware of it now.  These days, we so often get by on little kindnesses — someone being patient with our awkward German or smiling at us as we blunder through an unfamiliar social interaction — and our fragile comfort zone can be so easily damaged by the opposite — impatience, unkindness or a lack of understanding.

Last April, I had one of these not-so-great interactions with an Austrian.  (Though most of our interactions with the locals here have been overwhelmingly positive.)  I had just taken the kids to get their latest set of vaccines.  We’d had to skip nap time to make the appointment, and I was happily surprised and quite relieved that both boys had handled themselves so well.  We were on the tram, headed home, and enjoying the ride — talking to each other, commenting on what we saw out the window, asking and answering questions.  Normal mom stuff with a 2 year old and a 4 year old.  I was truly present in the moment, enjoying my kids, and we were all happy to be headed home. 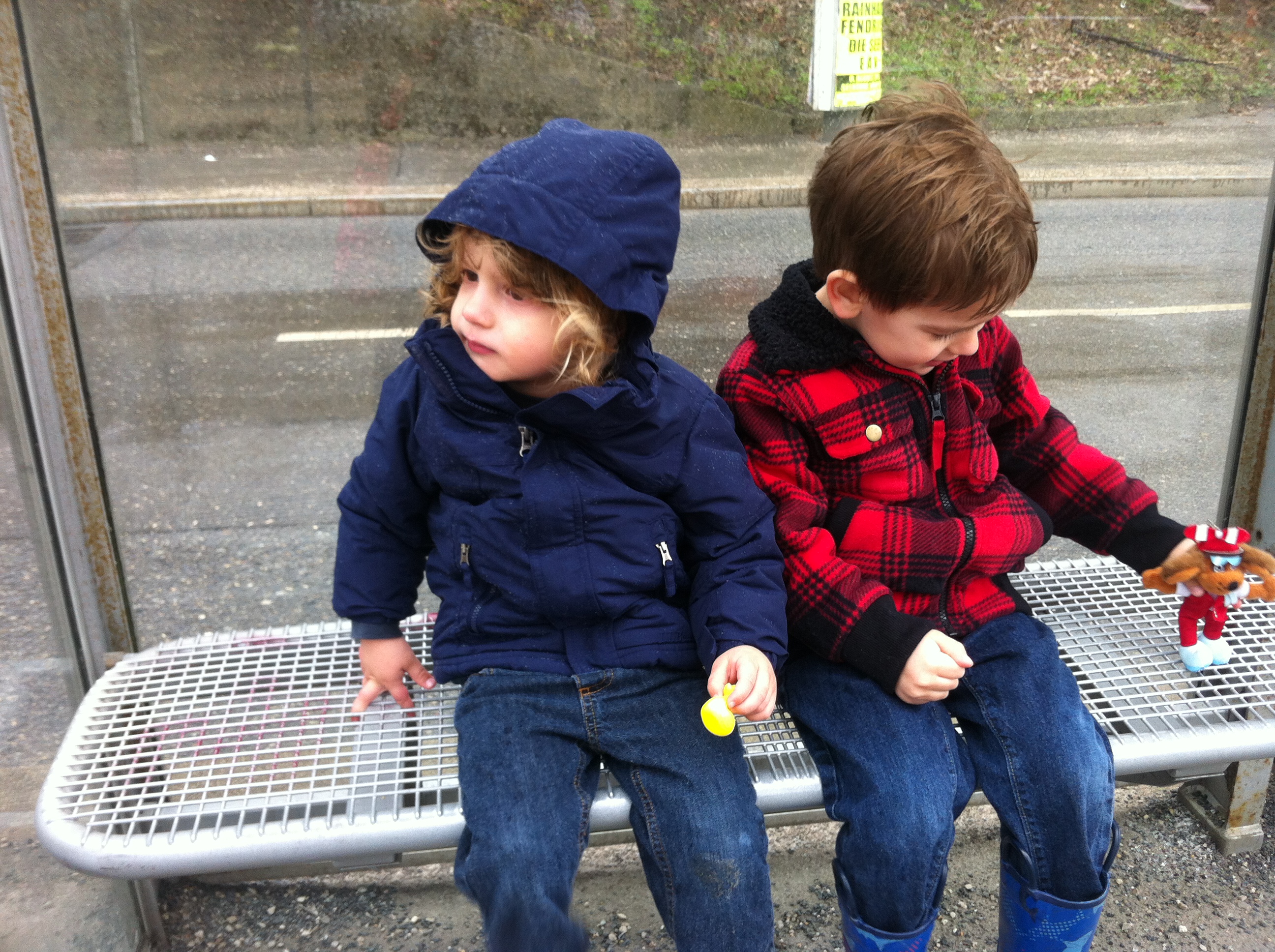 And then, quite suddenly, an older man near the front of the tram car stood up and started shouting at us.  It would have been unsettling regardless, but since Austrians are typically exceedingly quiet on trams and trains, it was particularly shocking.  The entire tram car fell silent and stared as he told us off, in irate German (extra angry-sounding points for that) for making entirely too much noise, before departing the train at the next stop, shouting as he went.

I was mortified.  I was also genuinely surprised and immediately defensive.  My kids had not been particularly loud (seriously, by American standards we were using almost library volume voices) and this man had been sitting dozens of feet away from us.  What was his problem?!?  My fellow tram riders gave me sympathetic looks and glared after him in commiseration, but still, behind my embarrassment and bruised ego, I felt entirely defeated.  Here, in this moment which I’d thought had been going so well, I felt suddenly reminded of how out of place we were, of how easy it was for us to be inappropriate, and of how poorly we were fitting in.  I felt so judged, and like such a failure.

In truth, I was also pretty pissed.  My kids were behaving, being happy, and no louder than the ambient noise on the strassenbahn, which creaks and squeaks as it makes its way through the streets.  If my German had been better, I would have told HIM off in return.  (So there!)  How dare he!  He doesn’t know us or our situation.  I immediately started creating dramatic scenarios we could be suffering through (but weren’t) that fueled my feelings of indignation.  What if this were my first time out with my kids alone ever?  What if one of us suffered from agoraphobia or social anxiety and just being on the strassenbahn was a victory?  What if we had suffered some kind of trauma or loss and it was our first happy conversation in months?  None of those things are true in our case, but it IS true that being out with both kids, on public transportation, in a country where I am an outsider and have trouble communicating is a major challenge.  Keeping both kids relatively quiet and happy is a major achievement, and he had just crapped on it.  I was hurt, I was angry, and I was instantly critical him for not being more thoughtful before he opened his big, angry mouth.  I put on a brave face for the kids, who were looking to me to see how to react.  I shrugged it off and went back to discussing things outside the window, but in my head, I fantasized about all of the nasty things I wished I could have said.

And then, as I obsessed over it, I was suddenly struck by a realization – I was judging him, too.  Maybe *he* has trouble being out in public.  Maybe *he* recently suffered a loss.  Maybe he is old and bitter and alone and the sound of children laughing is like nails on a chalkboard to him.  Maybe he once lost a child, or a grandchild, and my children being happy was painful for him.  Or maybe not.  Maybe he was having a bad day.  Maybe he got some bad news, or was in bad health, or was exhausted from taking care of someone or stressed about his finances.  I don’t know.  Any or all of those could be true.  (Or he could just be a big, old, Austrian grumpypants.)

Regardless, it’s no more my place to judge him or to lash out in anger than it was appropriate for him to shush us out of his own personal frustrations or issues.  And yet . . . I pass judgement on others all the time (both good and bad):  I like her hair, I think he’s fat, I wonder what she was thinking when she put that outfit on this morning, I think that dad is clueless because he’s letting his kid get away with something.  I judge, ALL THE TIME.

I don’t know anyone else’s situation.  And, sitting on that tram, I realized that not only is passing judgement on others thoughtless and unkind, it absolutely bounces back and ends up hurting me, too.  When I judge someone else positively, I will feel (today, or one day in the future, maybe on a day when I don’t have it all together … like most of the days) like I don’t measure up to that standard I judged them against.  When I judge someone harshly, I will feel inadequate and ashamed later when I find myself failing to live up to that same standard.  Even the judgements I feel the most entitled to don’t serve any good purpose in my life.  We all have tough days.  MANY of my days over the past 3 years have been tough, and I’ve failed against all kinds of personal standards in ways I thought I would never allow to happen.  Things change.  Life is hard.  Nobody is perfect.

I think it’s part of why I carry so much guilt as a parent — because before I was a parent, I passed judgements about other parents.  I *knew* what I would do or say or how I would handle certain situations or behaviors.  I would *never* do this, that, or the other and would *always* do something else.  And then, when it was my turn, and ABSOLUTELY NOTHING WENT HOW I EXPECTED, I constantly heard my own voice echoing in my head, judging and criticizing my choices.  And I naturally assume that everyone else is constantly thinking those things too.

Parenting is hard.  Nothing in my life has taken me so quickly off of my high horse of “always” and “never” than having a child (except maybe for having the second one).  Living in a foreign country is hard, too.  And people ARE judging me.  I get stuff wrong all the time.  As a parent, as an expat, as a human being.  I make mistakes ALL THE TIME.  Like EVERY day.  And what I’ve learned in 5+ years as a parent and 3+ years as an expat is that every single thing I do is going to be “wrong” in someone’s eyes.  EVERY SINGLE THING.  People didn’t like that we used disposable diapers and others wouldn’t have liked it if we’d used cloth diapers.  To some people, it was wrong for me to breastfeed my kids in public and to others it was wrong when I would choose not to (it’s also wrong to not cover up and wrong if I did).  There are people who think that moving abroad was the best choice ever and people who think we’re heartlessly selfish for subjecting our kids to this.  Everything I do, from what I feed my kids to what I dress them in to what time I put them to bed to what I let them watch (or don’t) on tv will be wrong to someone.  I have gotten crap for taking my kids shopping in the stroller because it makes the store too crowded, but if I don’t bring the stroller, someone will be upset because one of the kids touched something they shouldn’t have or sat down in the aisle and refused to walk another step.  People roll their eyes when one of my kids is crying on the train and they roll their eyes when I give them a cracker to stave off the crying.  There is just no way to “win” the judgement game, except to choose not to play.

And, like the grumpy guy on the strassenbhan, the judgements people pass on me are ALWAYS a reflection of their own personal story, not of mine.  So, thanks, angry strassenbahn man from a year ago.  You gave me some much needed perspective.  It was an unexpected gift that I’m not sure you meant to give.  (Thanks anyway, though.)

6 thoughts on “Judgypants — My Messy Beautiful”