For many years, we had the habit of foregoing the Christmas tree lot and heading out to rural Maryland to select and cut down our Christmas tree.  The habit started with my dad, who almost always gets his trees this way (you certainly can’t beat the freshness, but the hour or so home with the tree tied to the top of my little car — part of it on major highways — was always a bit of a harrowing adventure). 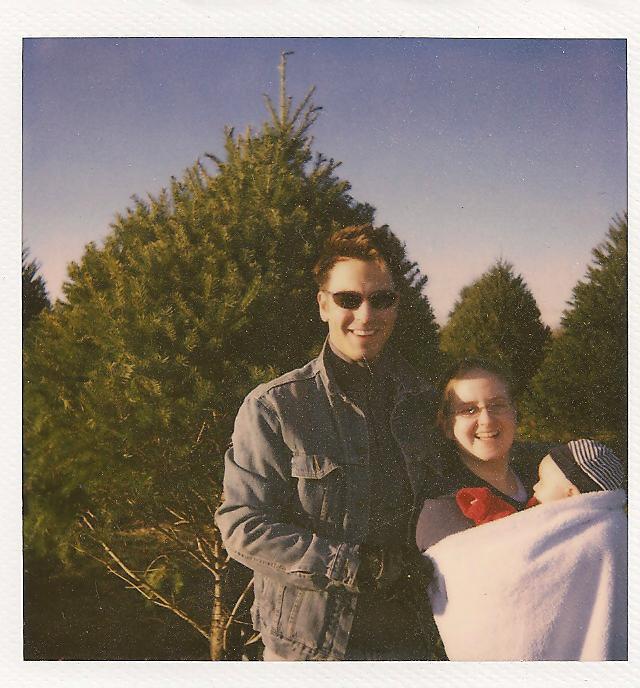 I think the last year we did it was Benjamin’s first Christmas.  That particular year, instead of taking cute pictures of our little baby in front of his first Christmas tree at the tree farm, we ended up with a screaming, miserable wind-blown baby with whom I retreated to the cold car where then proceeded to accidentally bang his head on the car door (which wasn’t the fault of the location) and we spent a miserable hour waiting for Dan to choose and retrieve a tree on his own.  (Note, the tree in the picture is not “our” tree.  We posed this picture at the end so we would have something to show for our efforts . . . other than just the tree.)  That corrected my romantic notions about tree-felling with tiny children, and afterwards, while still in the States, we relied on the local tree lots for our trees.

I still really like the idea of cutting down our own tree, though, and, had we stayed in the US, it would only have been a matter of a few years until we had most likely returned to our yearly familial trek to the countryside for a tree.

In Vienna, though, that hasn’t been an option for us.  Without a car, finding a place to get a tree and (more importantly) getting it home would have required entirely too much 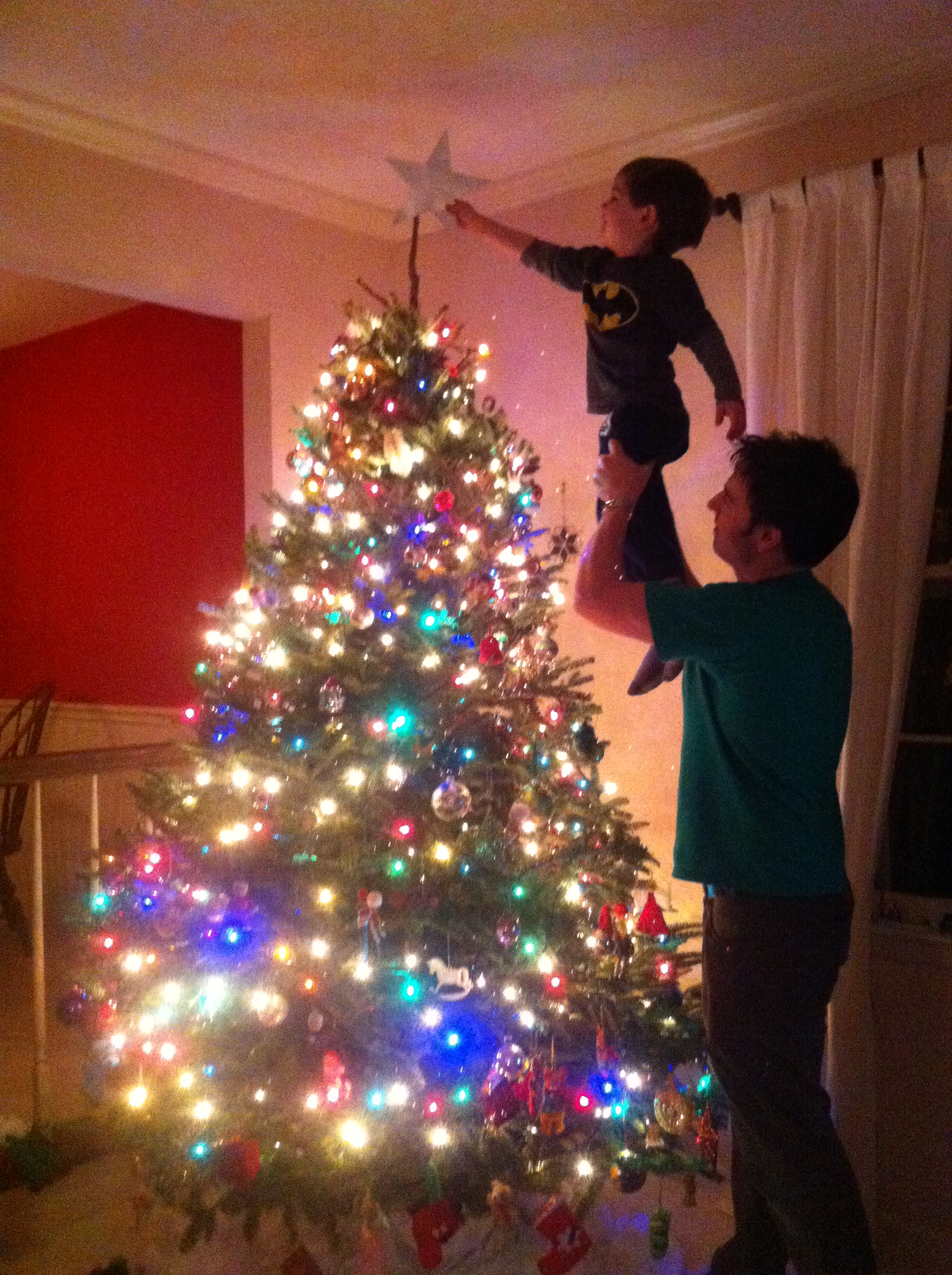 effort.  (Although I did recently see someone transport their tree by city bus, and there was a lady who checked in a tree as luggage at the airport, so maybe I just didn’t think hard enough about a solution.)  So, since we’ve been in Vienna, we’ve satisfied ourselves with the super-convenient tree lot across the street from our apartment building.

This year, since we spent the holidays in Maryland, we didn’t get a tree for our apartment in Vienna at all.  It was strange not to have one.  Decorating, and then enjoying, a festive tree is one of my favorite parts of the Christmas season, and I don’t follow the Austrian tradition of getting one at the last minute.  I always want to have as much time 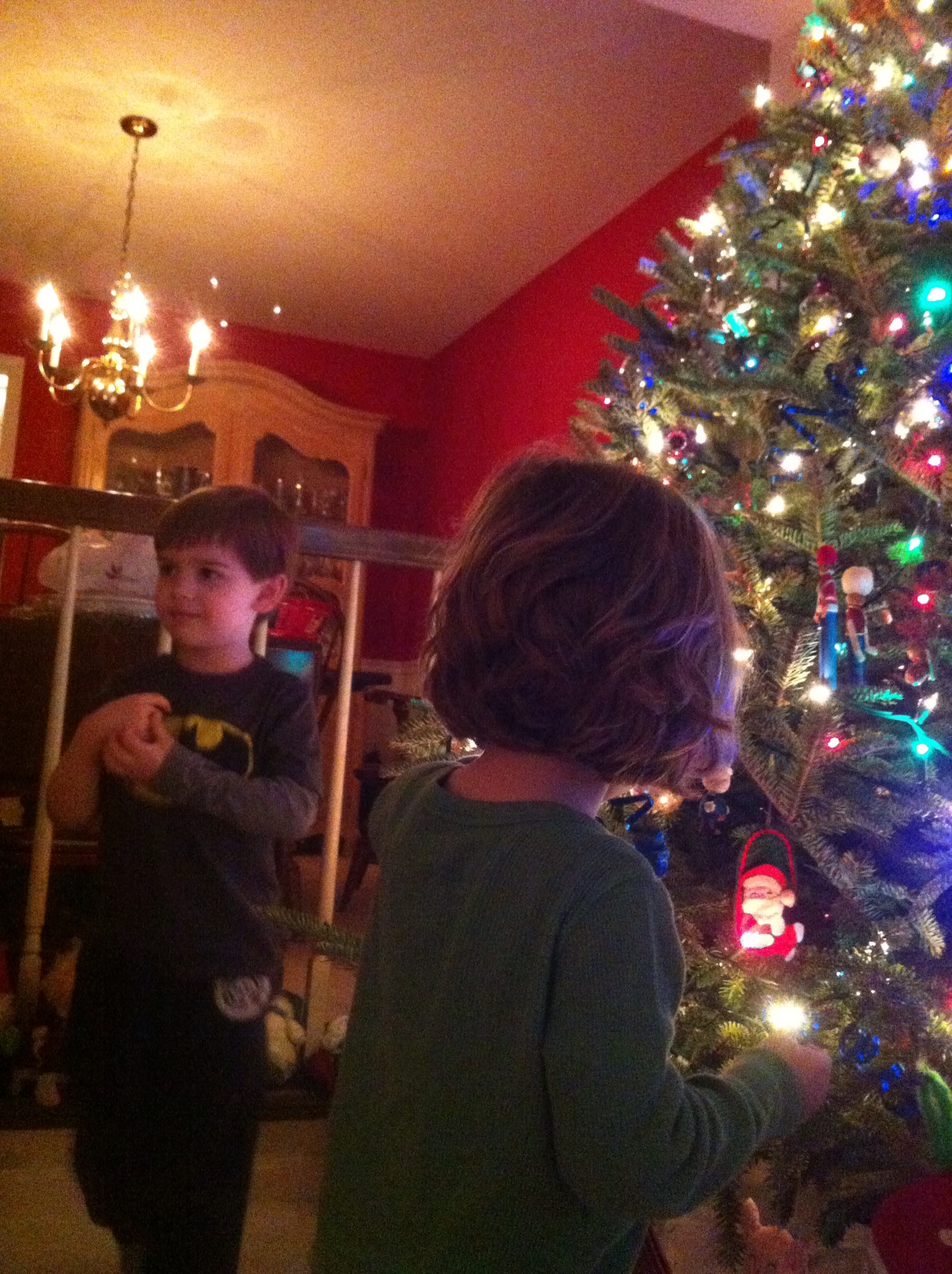 as possible to enjoy it before (and after) the holidays.  But I couldn’t think of a way to really make it practical to have one this year, since we were gone for 2 weeks, and Christmas trees aren’t even available here until mid-December.  So we didn’t get one of our own.

With our trip home this year including an arrival shortly before Christmas (late on Dec. 20), my mom had already gotten and beautifully decorated her tree.  It was like magic for the boys when they saw it (I get my high standards for tree decorating from my mom, but she’s had more practice).  They absolutely loved it — especially because it was their job to put the finishing touches on.  I think *not* having one ourselves this year 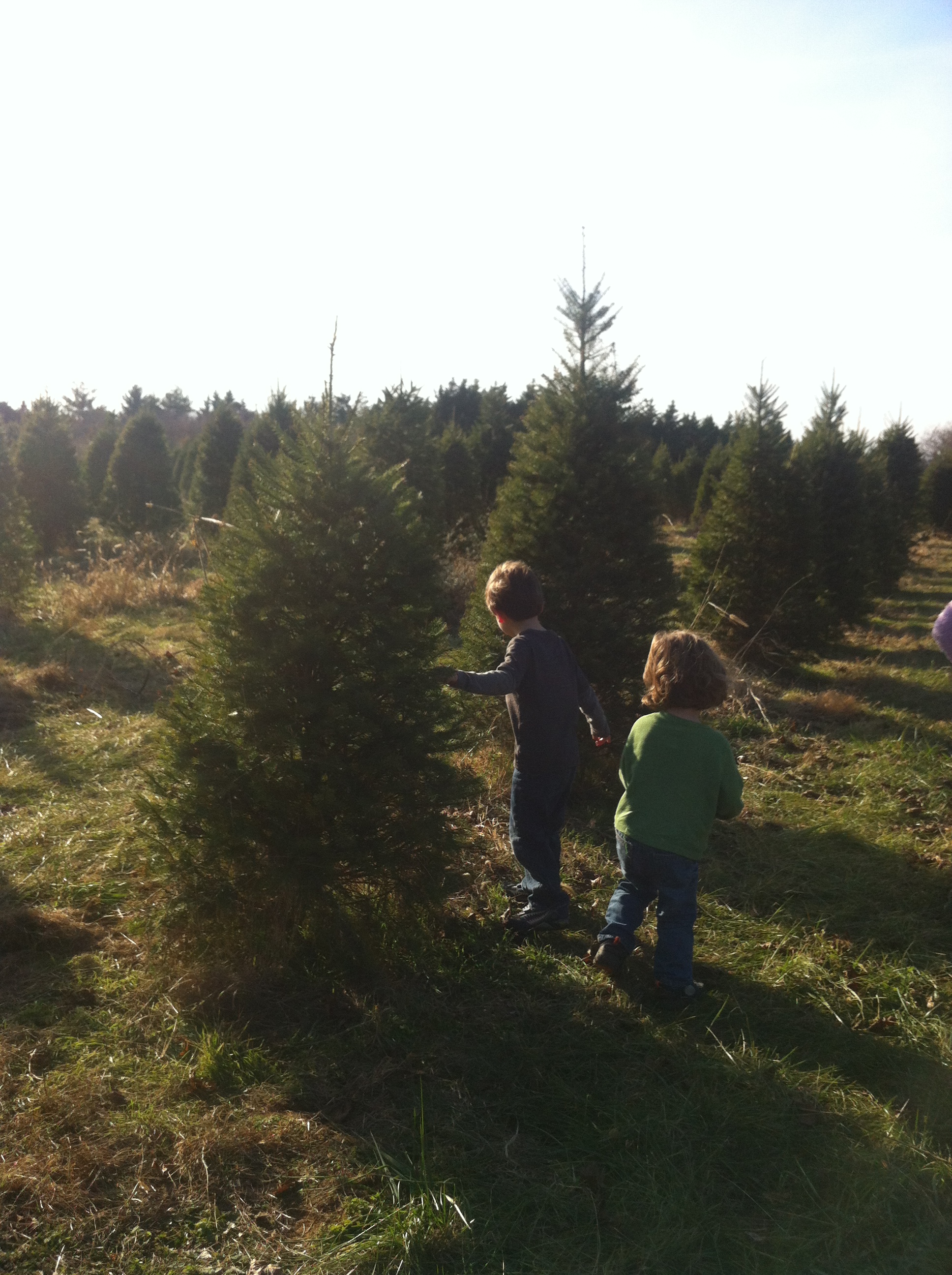 made it even more special to arrive at Grandma’s and to have one so beautiful to enjoy.

The boys really got the best of both worlds this year, though, because the day after our arrival we headed out to cut down a tree with my dad.  Although Benjamin had technically been on such an adventure before, he had no memory of it, and Liam had never been.  We were so fortunate to have amazing (if not very Christmassy) weather for it — we didn’t even need our coats!

It was so much fun to watch the boys rush off to find and inspect trees.  Liam nominated the very first one that we saw.  They chose big ones and small ones, of several different 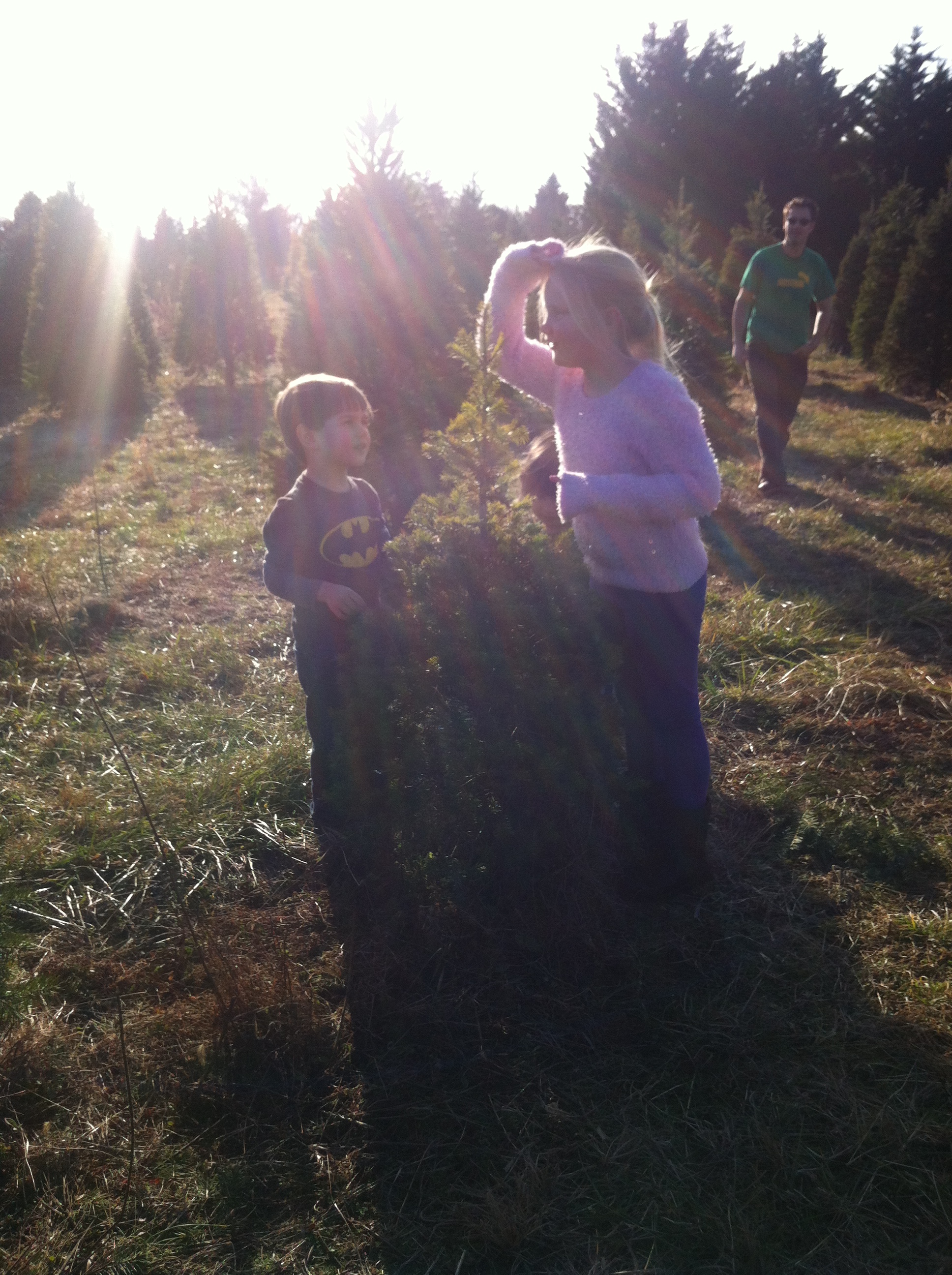 types.  (They had a strong preference for “soft” ones that they could touch or hug without getting hurt.)  After a bit of dashing about, nominating trees, and befriending a little boy they met (they were simply FASCINATED that he could speak English!), with Grandpa’s, Sam’s, Margie’s and Adam’s help, we finally chose “the tree” for Grandpa’s house this year.  The kids were thrilled.

And then, to top it off, Benjamin actually got to get down on the ground and help Grandpa with the saw.  He cut down his very first tree!  And then, he was so proud that he pretty much pushed Uncle Adam aside when it was time to carry the tree back to the cashier.  Both 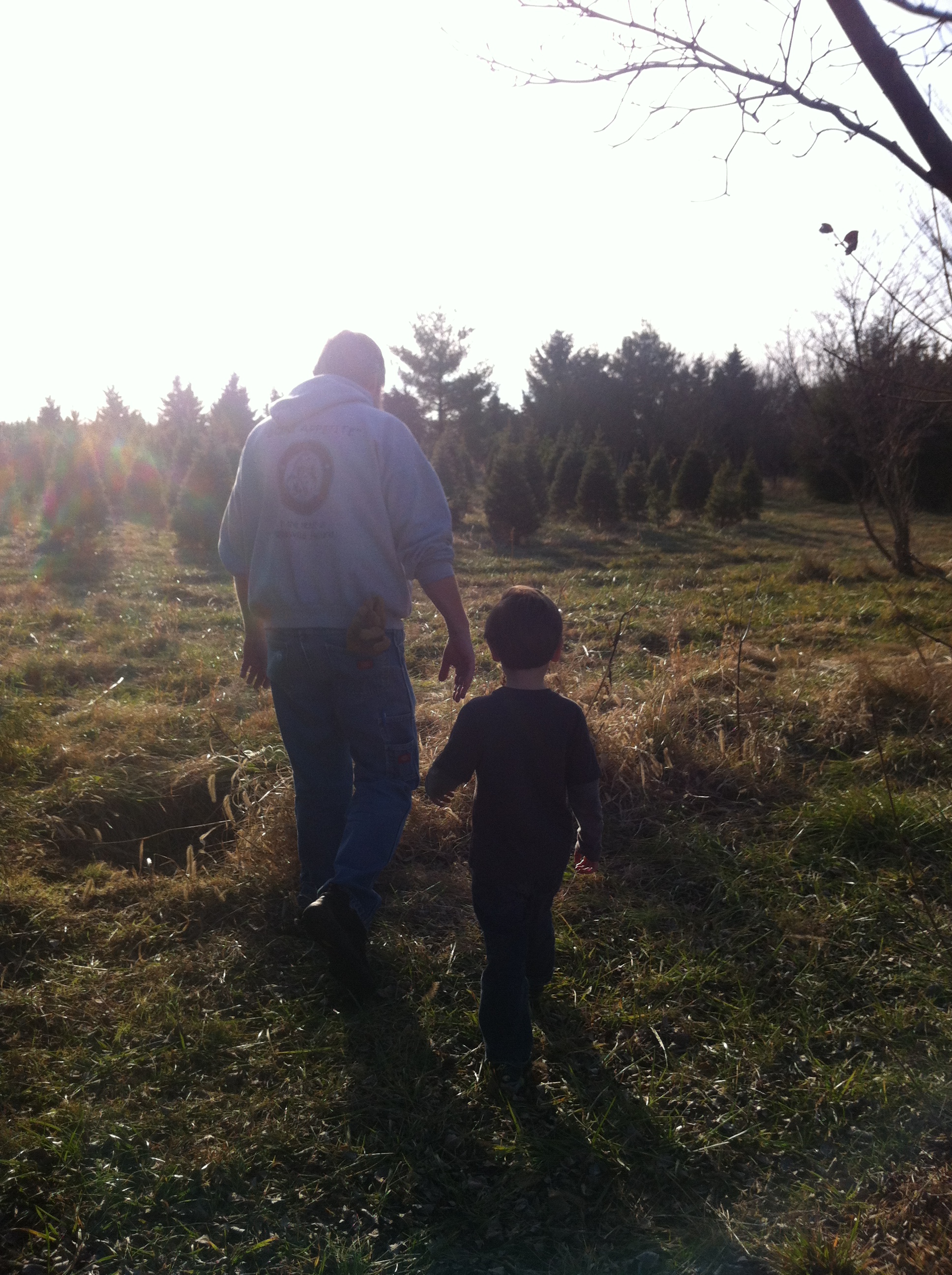 boys were so proud to be able to help.

And so, the boys got to play lumberjack, and they got to take part in a piece of Christmas tradition I’d been wanting them to experience.  I suspect that in the years to come, whatever we decide to do in terms of acquiring our own tree, going and hunting down a tree with Grandpa is doing to remain high on their list of favorite Christmas traditions.  (I don’t think that true December weather will even dampen their enthusiasm at all!) 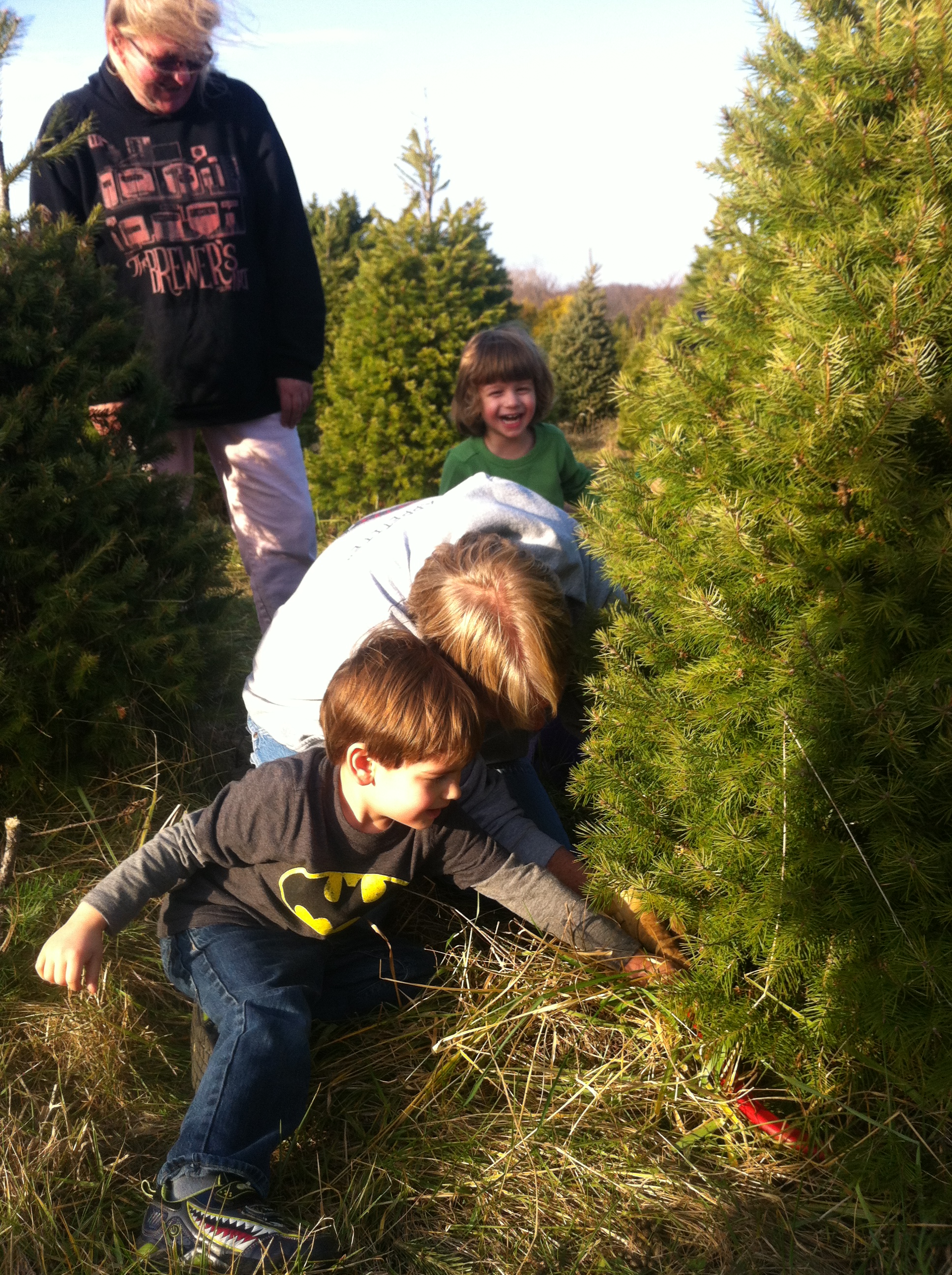