After our chaotic first day of our most recent trip to the Salzburg area, I was really looking forward to doing something fun.  Our plan for the second day was to visit Hallstatt, a tiny, ancient town in the Salzkammergut.

Golling, on the way to Hallstatt from Sankt Koloman

Hallstatt has been on my list of places to visit since we first began to even consider a move to Austria.  One of the first things we did when we started pondering our relocation was to watch Rick Steves’ program about Austria.  That first information inspired many of our early explorations here (including our bike trip along the Danube last year).  I came away truly charmed by the idea of Hallstatt, and I knew we’d want to go while we were here.  So far, it was the last remaining place on that first list we made of places to see, and it was actually the main inspiration behind this particular weekend away.  I didn’t want to risk NOT seeing it while we live in Austria, especially since I’ve truly been looking forward to it from the beginning. 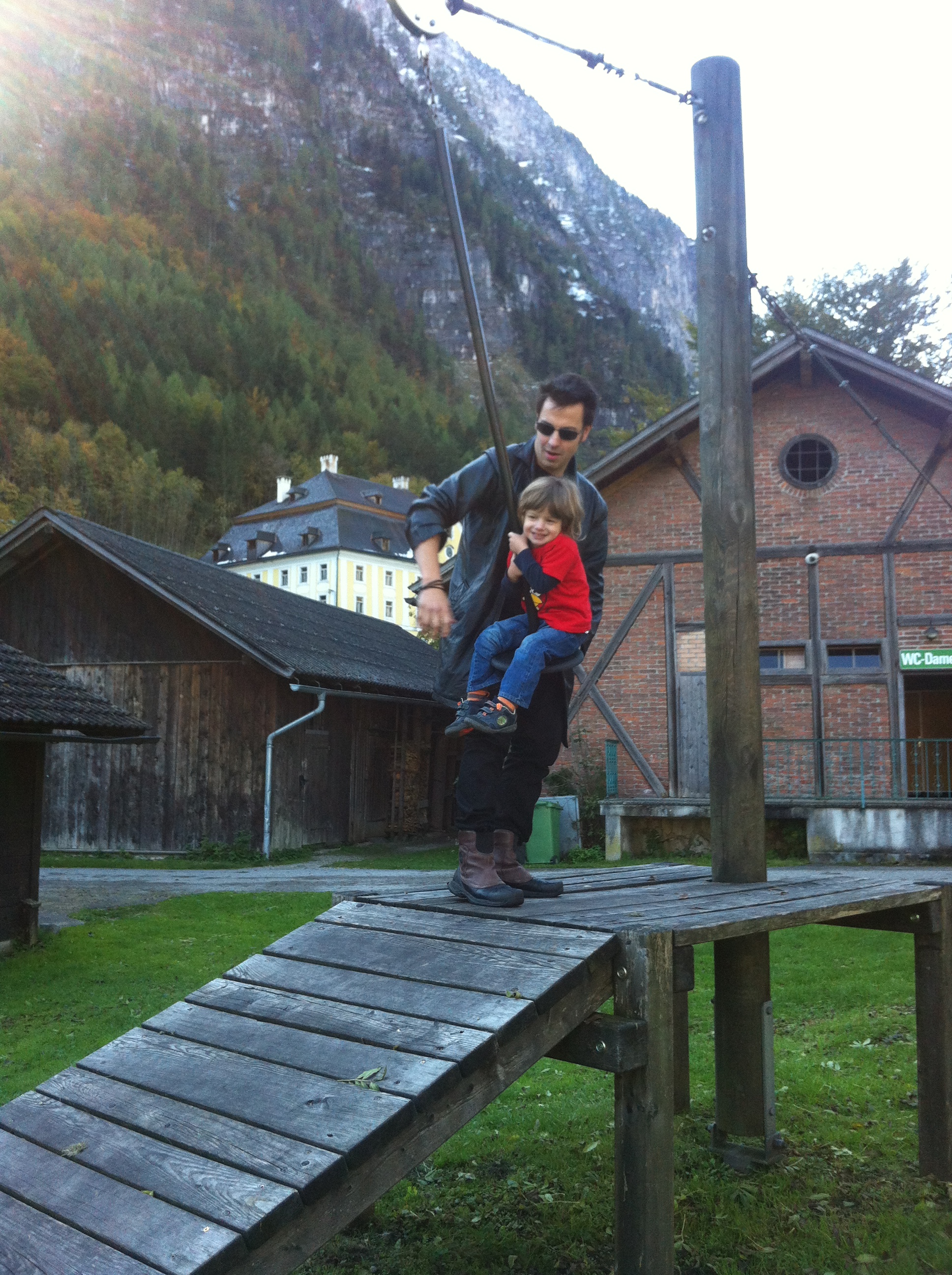 It lived up to every expectation.

We were in the mountains, to be sure.  It was several degrees colder when we got out of the car than it had been when we got in, and the height of the peaks, coupled with the already decreasing height of the sun’s arc through the sky meant that the sun set and rose again several times during our visit.

We started (as we so often do) with a stop in the playground in the neighboring town of Lahn.  Vehicular traffic is severely limited within Hallstatt, so you have to park in the next town over and walk.  Along the way, we were greeted by swans, and we were completely charmed by our lakeside stroll to a town that looks more genuinely “Austrian” than any we’ve seen. 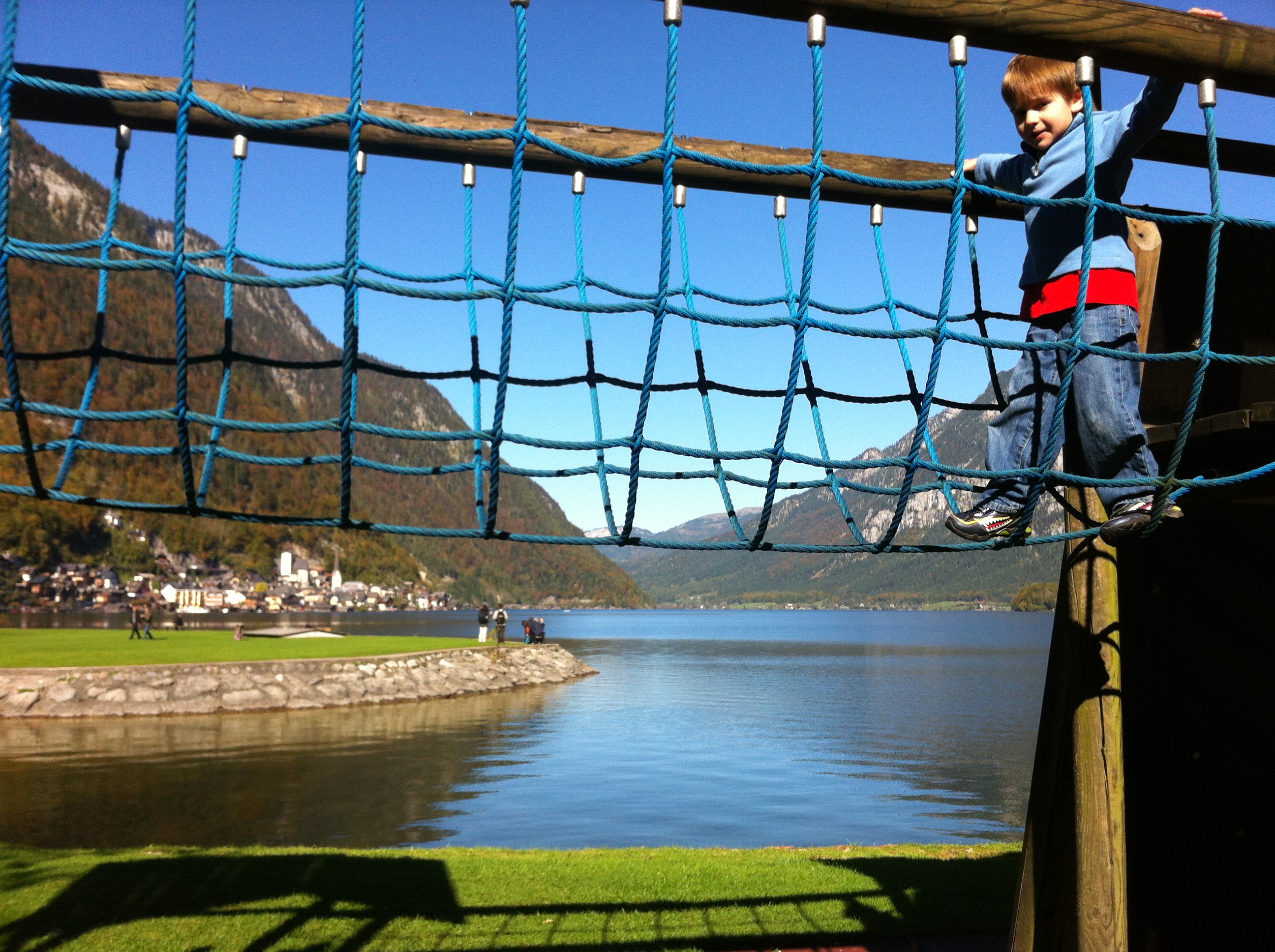 It’s not hard to believe that Hallstatt has been there a long time.  As Rick Steves points out, “There was a Hallstatt before there was a Rome”, although train service there didn’t begin until the late 1800s.  The labyrinth of winding, narrow streets, lined by gabled r 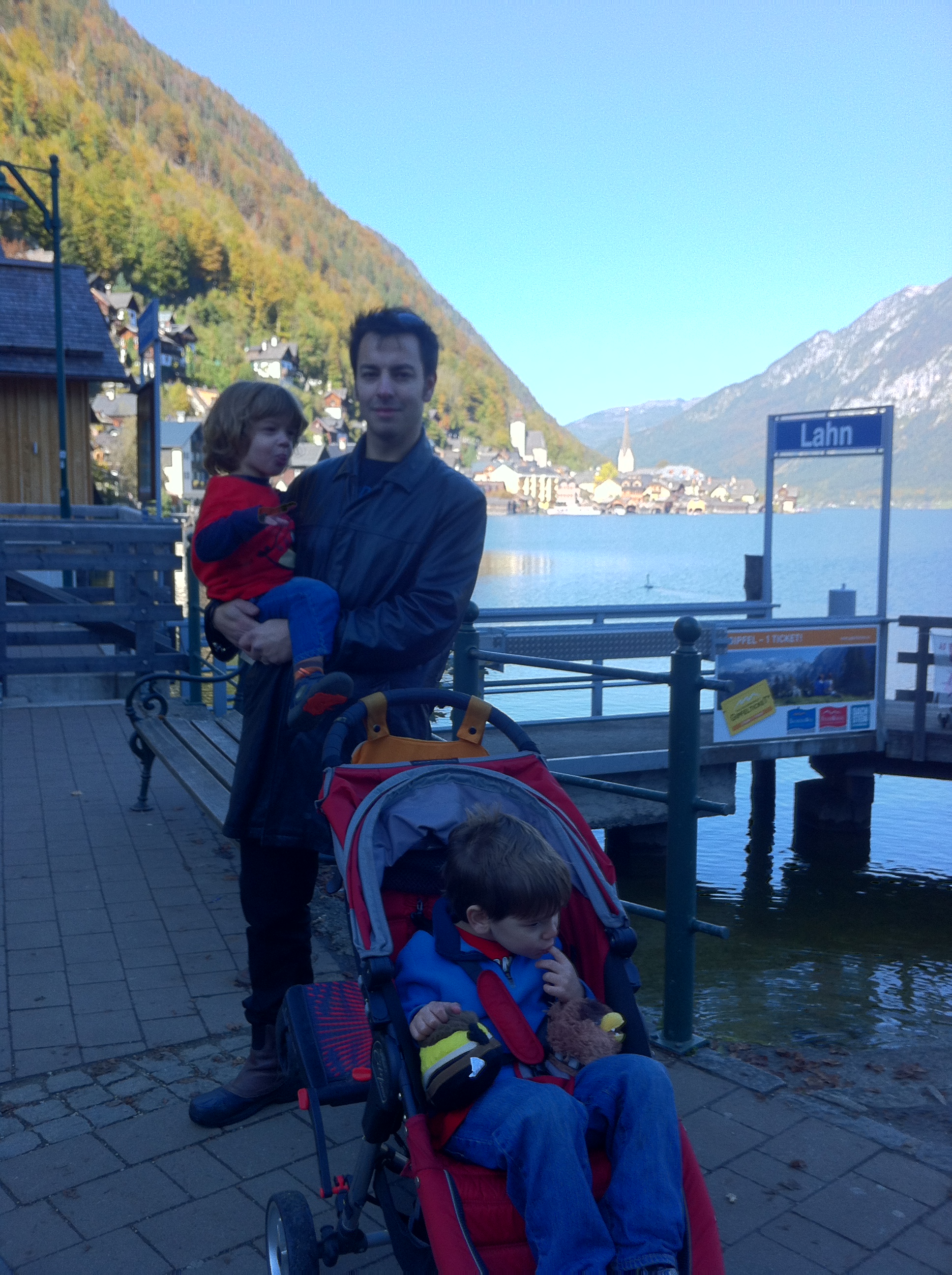 oofs and wooden-shuttered windows fronted by flower boxes full of pink, purple, white and red, and nearly absent of cars, made us feel like we’d stepped into another time.  Walking along the lake edge (there are only two streets that really cut lengthwise through the town — one along the lake, one up on the hillside) we were followed by hopeful swans, and we ended up in the main square, which was probably the most picturesque we’ve found in all of our travels.

I absolutely loved Hallstatt.  I loved the smell of the wood smoke, the gurgle of the waterfall the falls from the mountaintop behind the town, the rush of the crystal clear streams that rush through the town (and beneath many of the houses).  We spent a beautiful day there.  I’m so 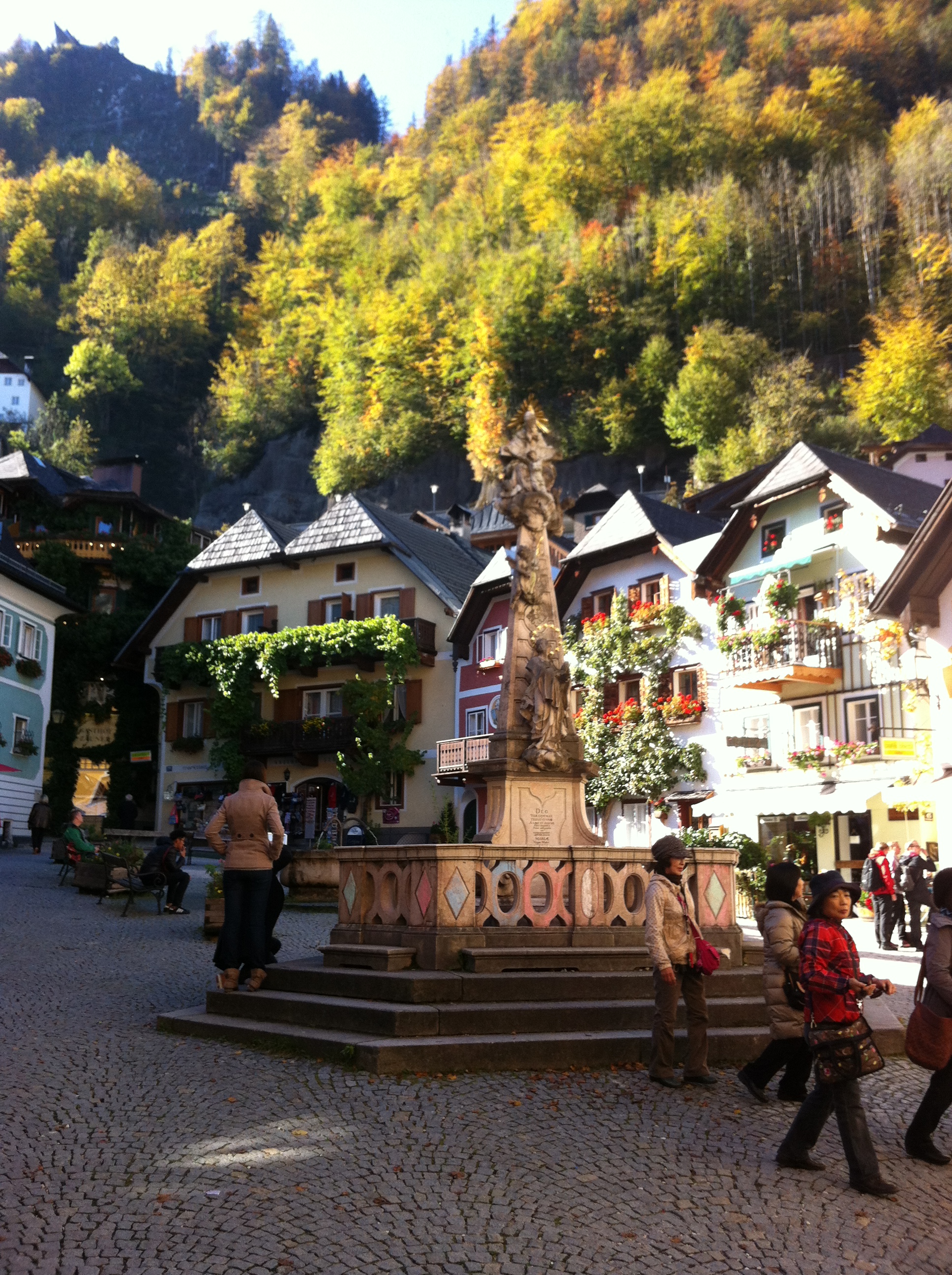 We ended our day at the docks, looking back over the town and dangling our (booted) feet in the water (trying to convince the ducks and swans that our rubber boots were not good to eat).  The moon rose over the mountain, and it got very chilly as the autumn evening fell, but it was perfect, beautiful and peaceful in Hallstatt.  (Of course, my phone ran out of battery about halfway through the day, so I don’t have nearly as many pictures as I’d like.  That’s ok.  I don’t think I’ll forget.) 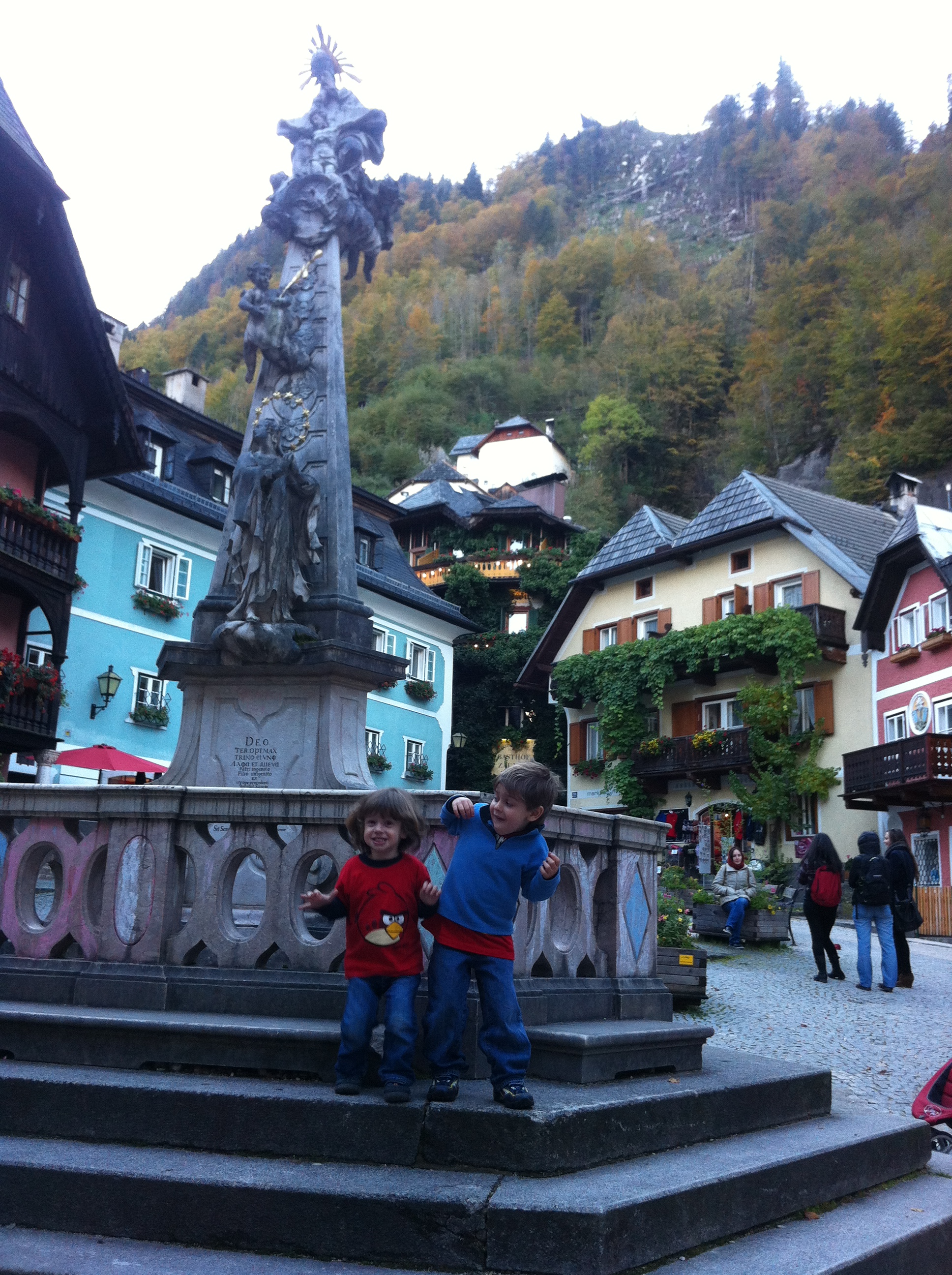