I can’t say for certain, but I’m pretty sure that we travel a lot more than average with our kids.  My boys have each already logged more airborne miles than I had by the time I was 30.  But for some reason, we’d never done the whole “visit the cockpit” thing — I’m not sure why.  It might be that we haven’t flown airlines that are likely to invite a child to stop by, or that we often have felt stretched pretty thin while flying, or that we were always supposed to be the ones that suggested it, and it never occurred to us.  (Is it something that even happens anymore in the US these days?)

A few months ago, a friend posted pictures of her grandson sitting in the copilot’s seat of an airliner, and it seemed kind of odd to me that it was something that my boys hadn’t yet experienced, so I made a mental note.  But I didn’t know how it would work.  Who should we ask?  When?  The first day of our most recent trip involved too much stress and literal running to even think about it (besides, one plane actually waited at the gate for us while we raced through the airport and had our Legitamations cards scowled at by German passport control, so they’d already done plenty for us).

But on the second day of our trip, early in the morning, we were the first to board, the cockpit door was open and the flight attendant was immediately friendly to the kids, so we asked.  She said we couldn’t do it before takeoff, but she asked the pilot and he told us to come back after landing.  B was so excited.  He started telling me about how he couldn’t wait to see the front of the plane, and how he needed to learn how to fly it because he’s going to be a pilot one day (the first time I’d heard that particular aspiration) followed by Liam’s enthusiastic, “Yeah!” 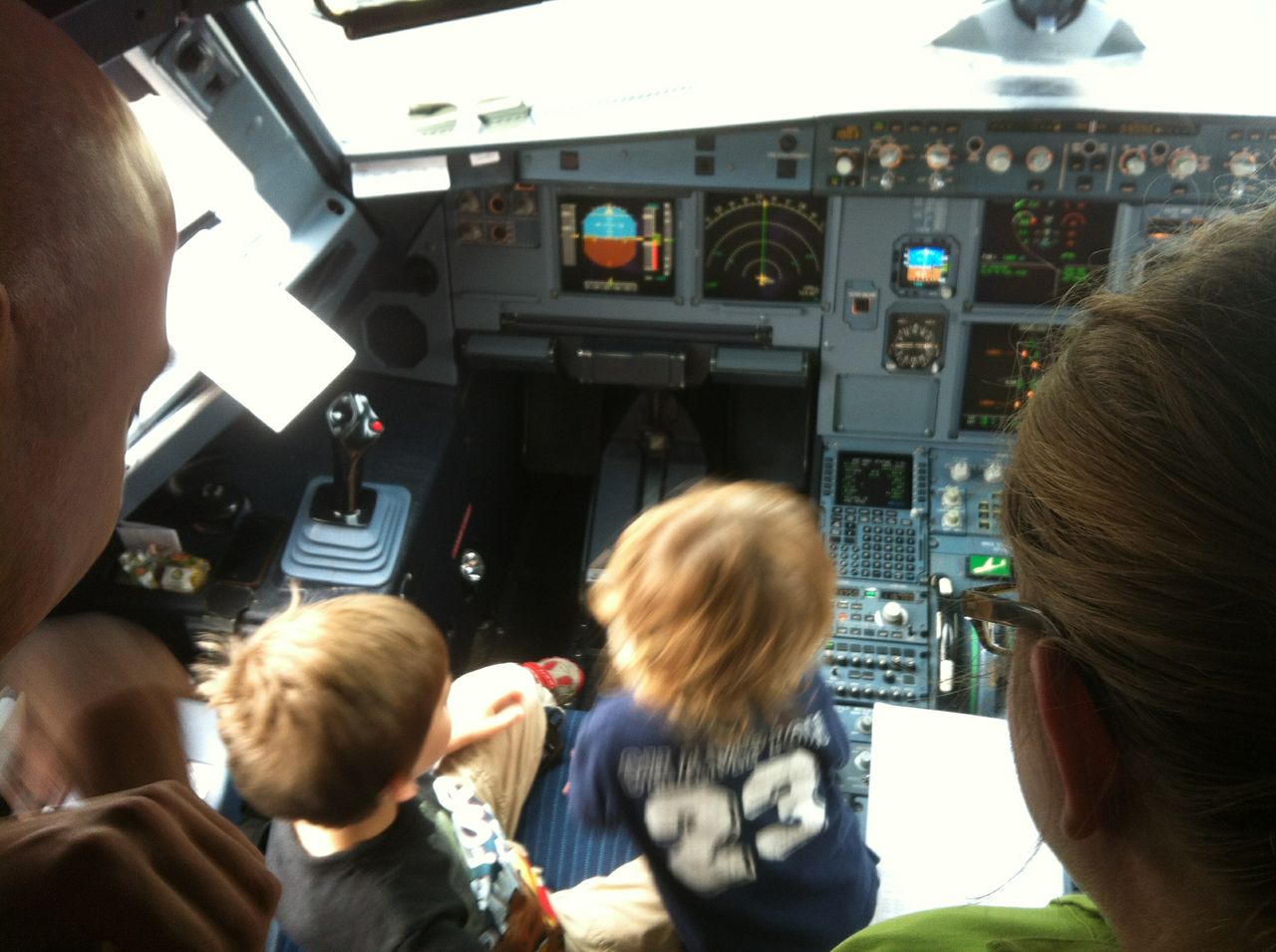 After a quick trip to Edinburgh, we stopped by after landing.  The pilot (who looked closer to Benjamin’s age than mine) was happy to have both boys visit.  The kids were so happy.  B was a little overwhelmed by all of the buttons and levers, but Liam wiggled his way right in and started pushing buttons and flipping switches.  I was afraid they were going to do something catastrophic, but the pilot assured me that everything was off and that as long as the parking brake stayed on, we were good.  After a moment, both kids had made themselves at home and were completely thrilled by the experience.  They loved it. 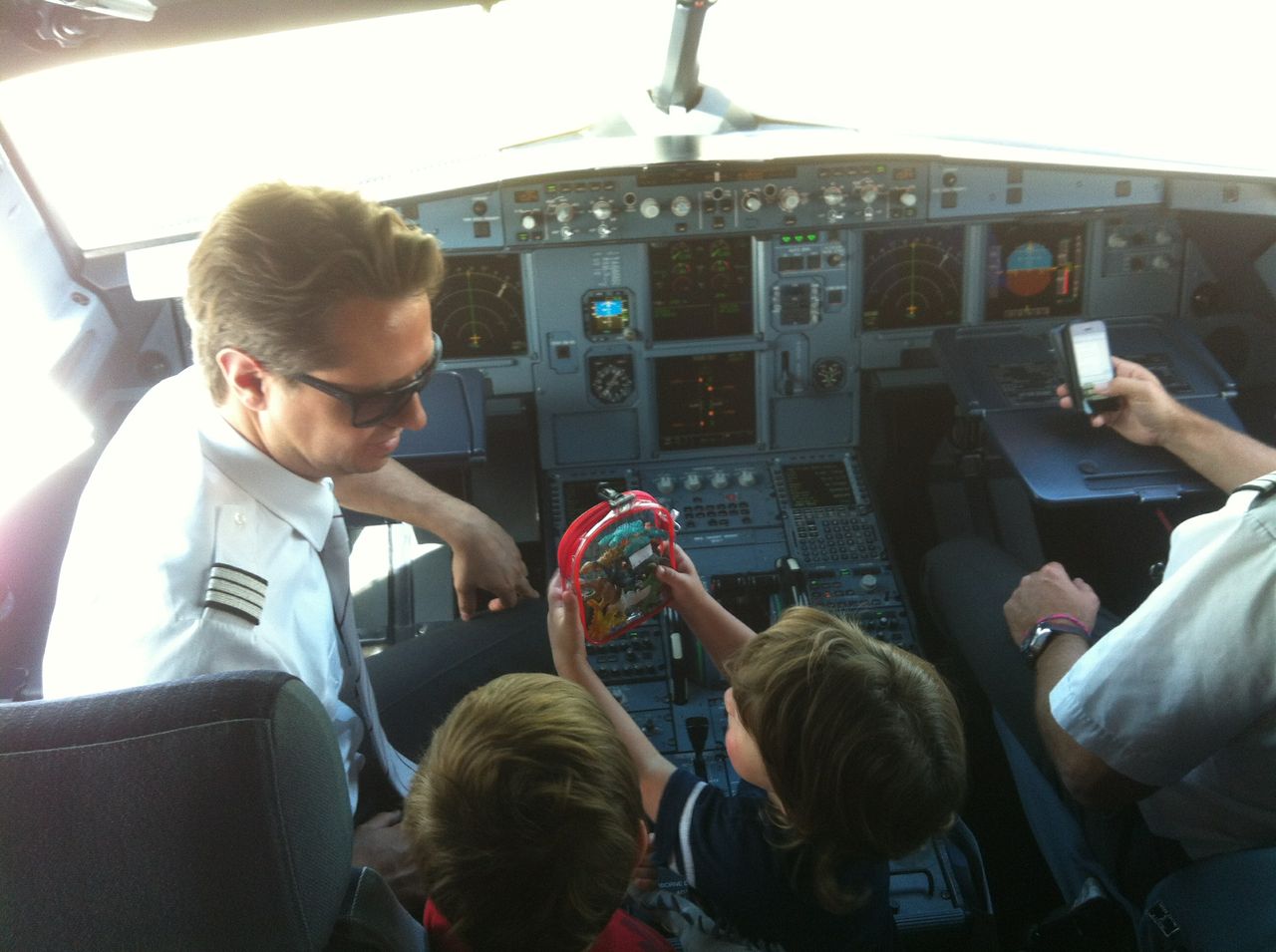 We had such a good time that the next time we flew, B asked — all by himself! — if they could go in again, and again, they got to go — they even got to bring their dinosaurs along.  This time, the pilots seemed a bit wary of Liam’s desire to mess mostly with the 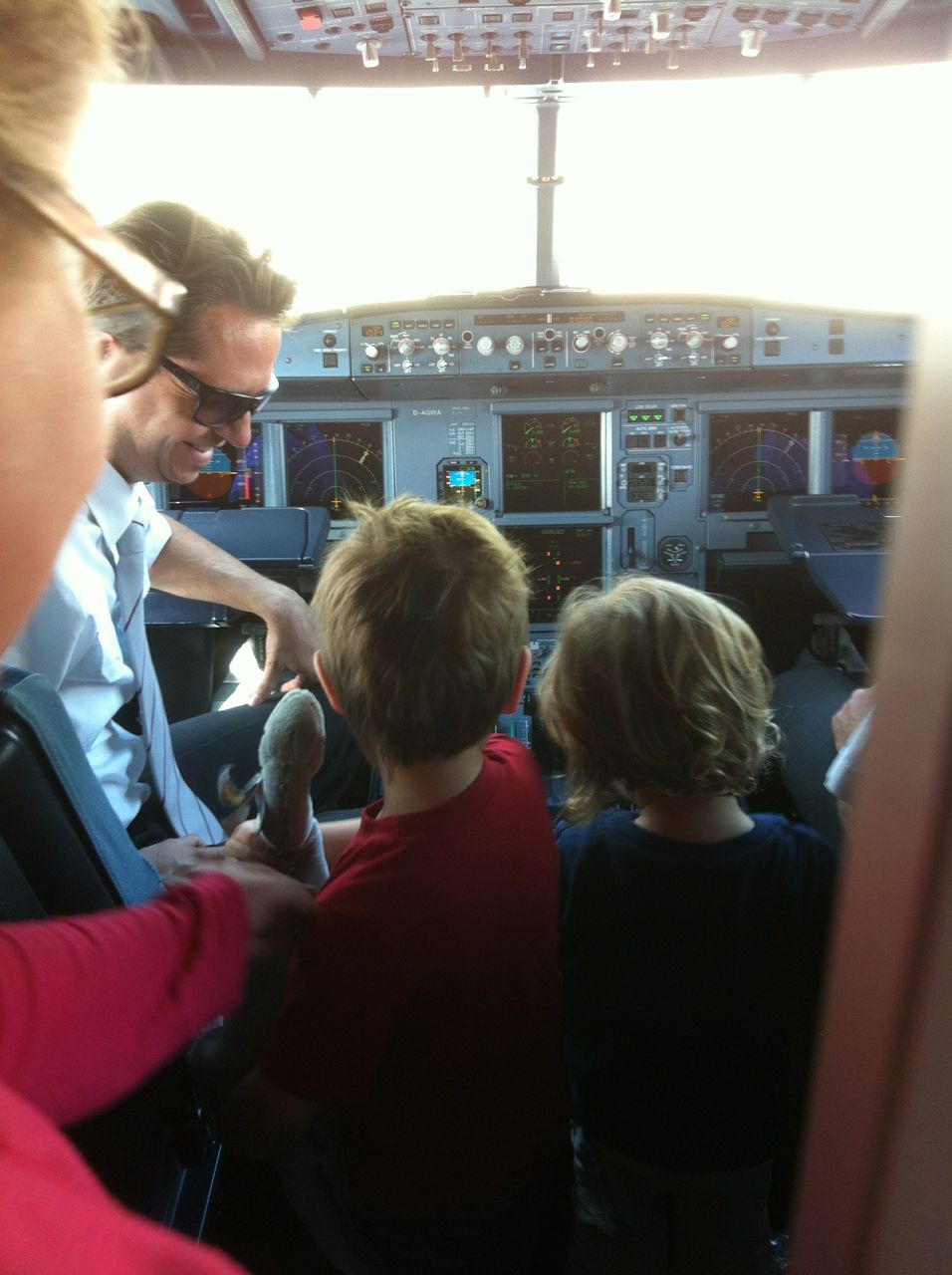 big red buttons (the ones that seemed like maybe not the best choice for operation by a 2 year old), but they were still great about showing the kids around, and even demonstrated what all the warning lights looked like.  (We tried again after our next flight, but they said no — and I was impressed at how well the boys took it.  They seemed to completely understand.)

Both boys already love flying, and I have the distinct impression that this is something they’re going to make a habit of.  I expect that flight attendants around the world will now be subjected to the sweet, polite, super cute requests of Benjamin and Liam.