Last summer, while we were on vacation in England, Benjamin picked out and purchased a book about Angry Birds.  This is not surprising, since he loves the games and the birds.  In the book, among other things, there are many very helpful ideas provided for throwing a bird-tacular (or something like that) Angry Birds birthday party.  Included in these pages are instructions for baking and decorating an Angry Bird cake.  Ever since he first saw it, back in September, B has wanted that cake.  Not a cake like it — the exact one in the book. 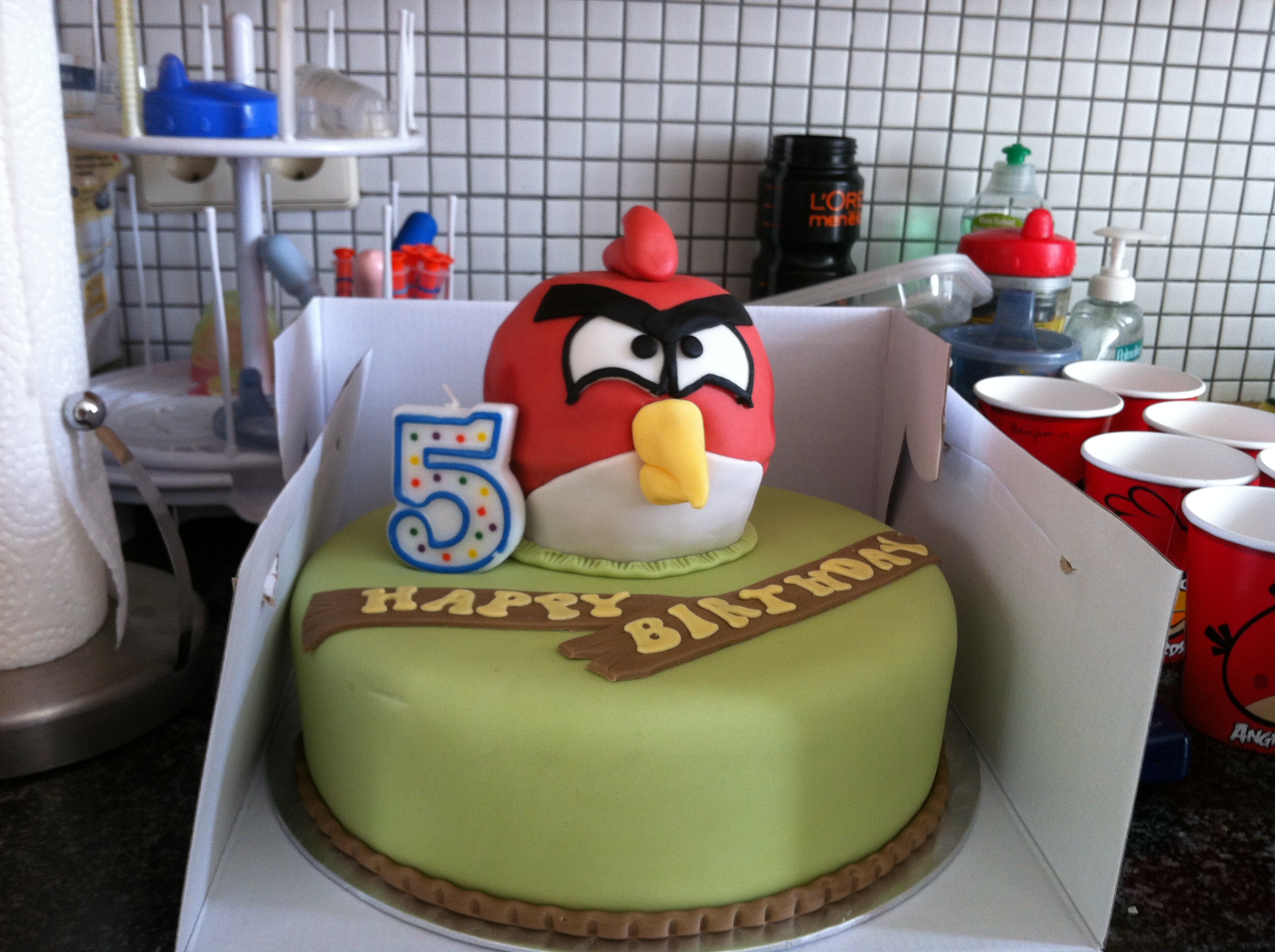 Last weekend, we threw a pretty fantastic Angry Bird themed birthday party for him.  It was a cultural adventure, but it went great.  In anticipation of the party, and with full awareness of my middling baking skills, we opted to purchase a lovely cake.  It was, of course, Angry Bird themed, and even included an entire spherical Angry Bird (made of cake!) perched on top.  And it was tasty, too!

And, although he loved the cake, this did nothing to reduce his determination to have “the cake from the book” for his *actual* birthday this year.  It also gave me a very tough act to follow.

I believe in the power of being the birthday boy.  I think that all reasonable requests on and for a birthday should be honored when possible.  And so, with many disclaimers about how I am not much of a baker, and that I’ve never made a cake like that before (I’ve never worked with fondant before at all) I told him I would make my best effort at creating “the cake from the book”.

This is what I was going for: 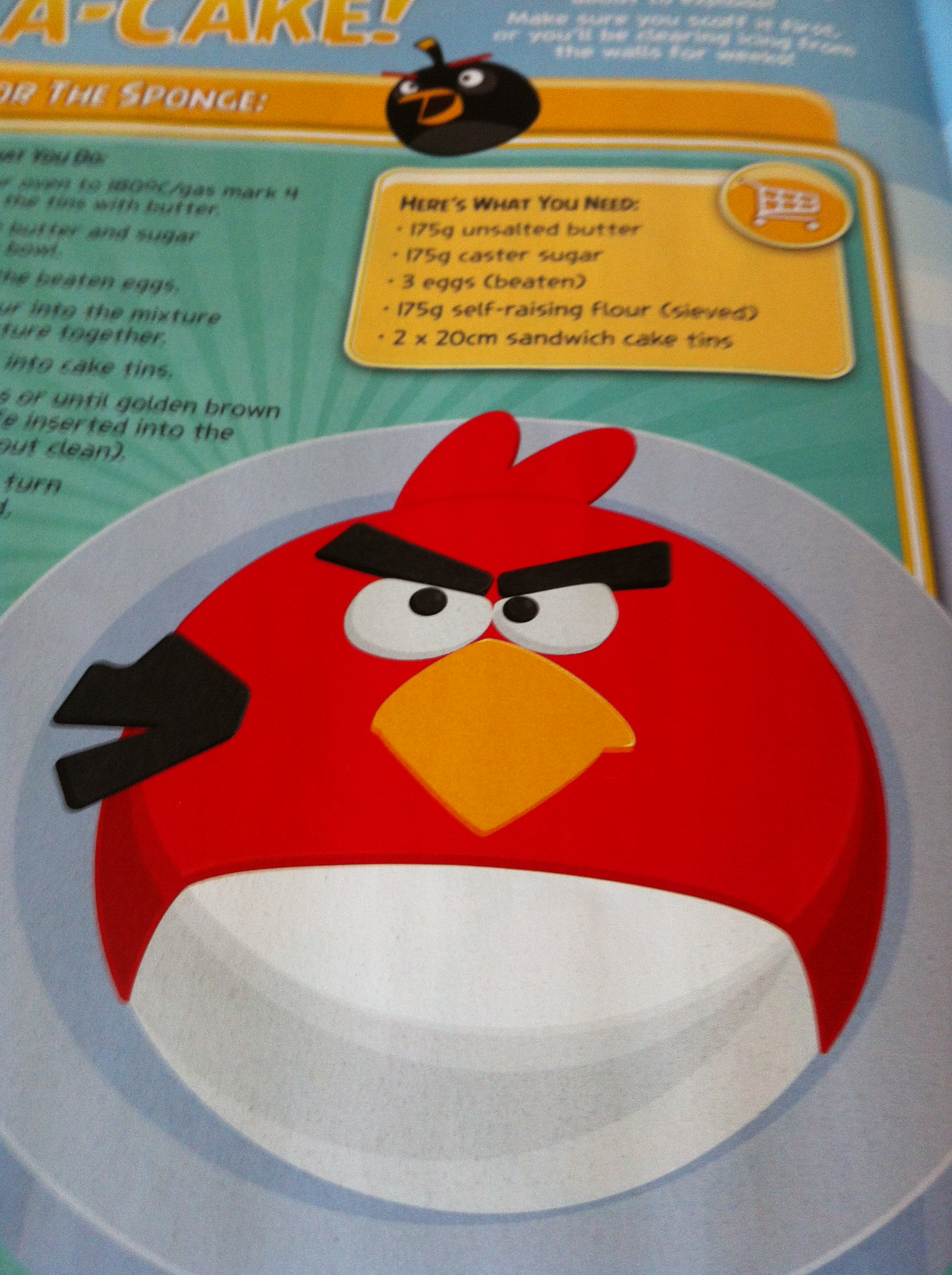 Ever since I committed to this plan, about a month ago, I’ve been wondering if I made a huge mistake.  I had visions of my efforts ending up, at worst, with a barely edible disaster, and, at best, with a grotesque project worthy of the “Cake Wrecks” site.  Nonetheless, he wanted the Angry Bird cake from the book, and I figured I could at least try.  After all, it’s cake!  How bad could it be?  I ordered the requisite fondant ahead of time (I was pretty grateful to learn I didn’t have to make it, especially since they don’t seem to sell food coloring in Austria, and I had no idea how I would tint homemade fondant).  Part of me was hoping it wouldn’t all arrive in time, but it did.

The night before the big day, we made the cake (from a mix).  After it cooled, I frosted it (with “strawberry” frosting — another request from the birthday boy, which I’m pretty sure is not actually advisable to ingest).  Problem 1 — I haven’t made a layer cake in a while, and I didn’t stack the cakes the “right” way — instead of putting the flat sides together in the center, I put the top cake, convex side down, on top of the other one.  Instant instability.  Well, whatever.  It would still be (relatively) edible.  I put the cake in the fridge overnight because although I am crazy enough to try to make an Angry Bird cake, I am not crazy enough to try to do it at 1:00 in the morning.

Yesterday was the big birthday!  5 years old!  Yay!  While he played with some of his new presents, I set about preparing the fondant for my very first attempt at this.  Following some very helpful advice I found online, I spread confectioner’s sugar on my work surface and added some shortening to the fondant.  To make things even more complicated, the first one I needed to use was the red (no chance at practicing on something simple, like white).  I kneaded it for a while (and took a guess on the desired consistency) and set about rolling it out.  Problem 2 — Although the rolling went ok, I didn’t use enough fondant the first time, so I had to start over with more.  Oops.  Now I had confectioners sugar liberally mixed through my red fondant.  Actually, though, after I got done with it, and put it on the cake, it didn’t look awful.  For the first time, I felt hope: 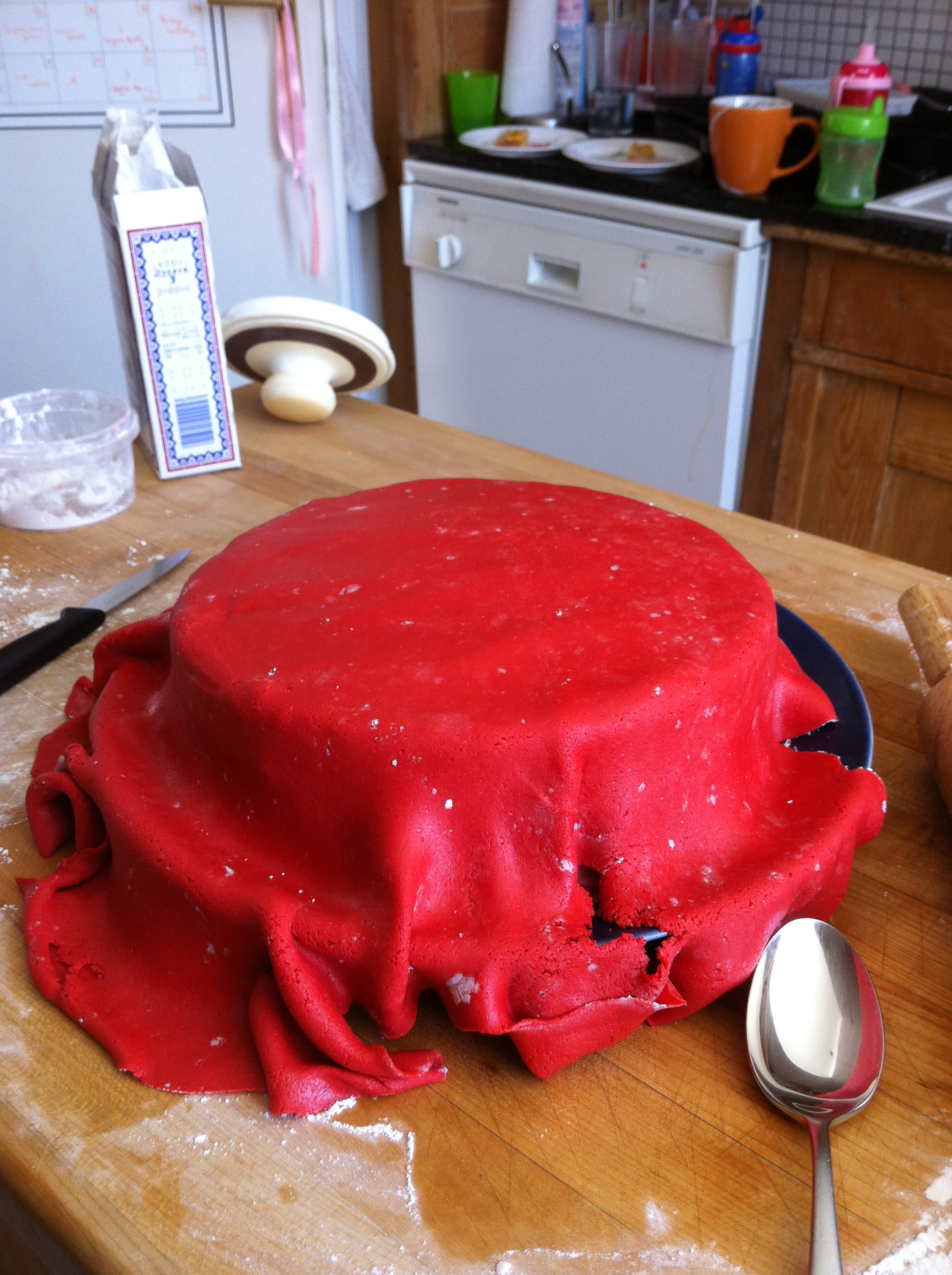 I continued to follow the instructions.  I trimmed it up, and then used the white . . . 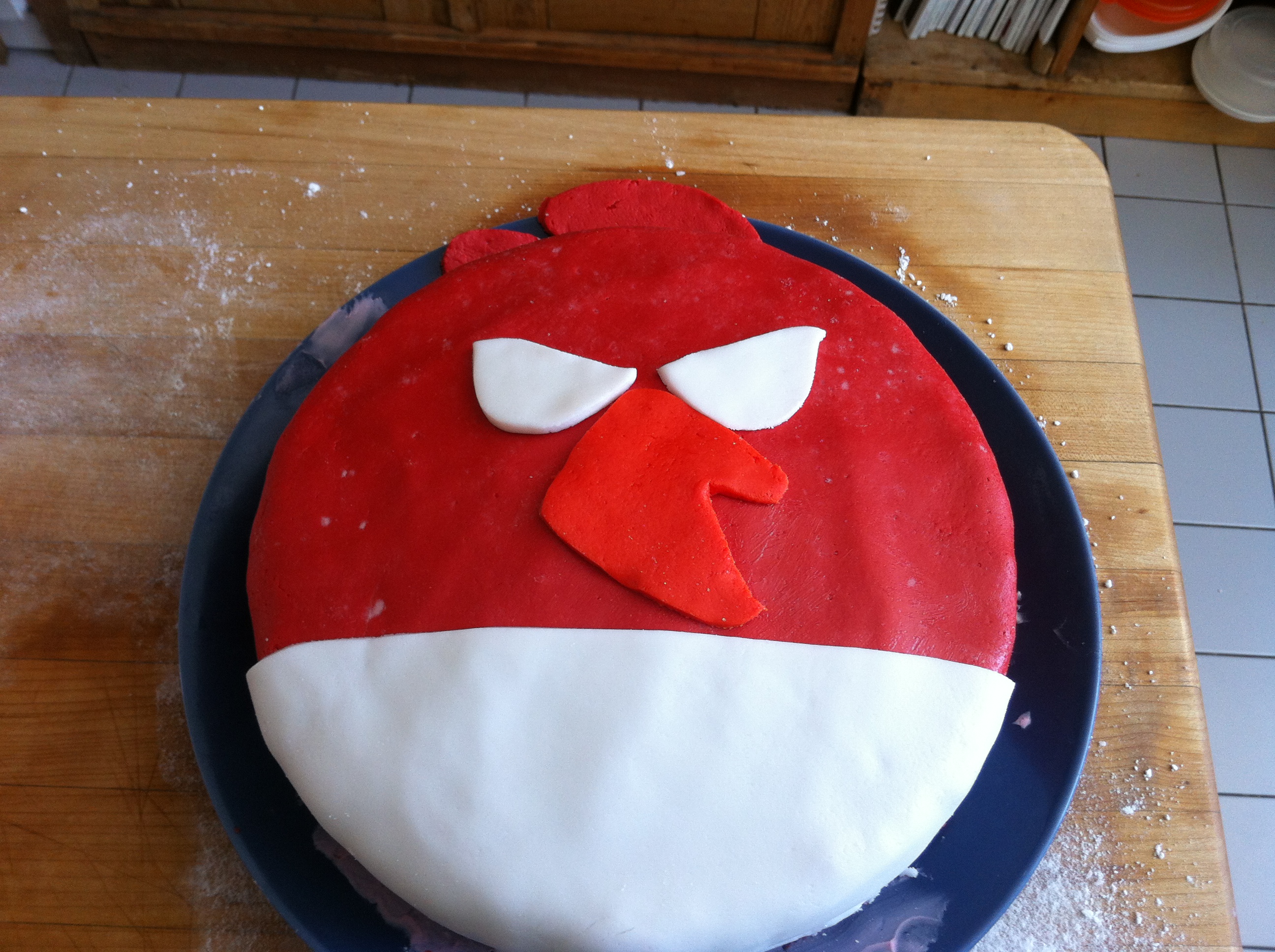 . . . and finally, the black fondant.  And, after all was said and done, I have to say, I’m pretty proud of the result: 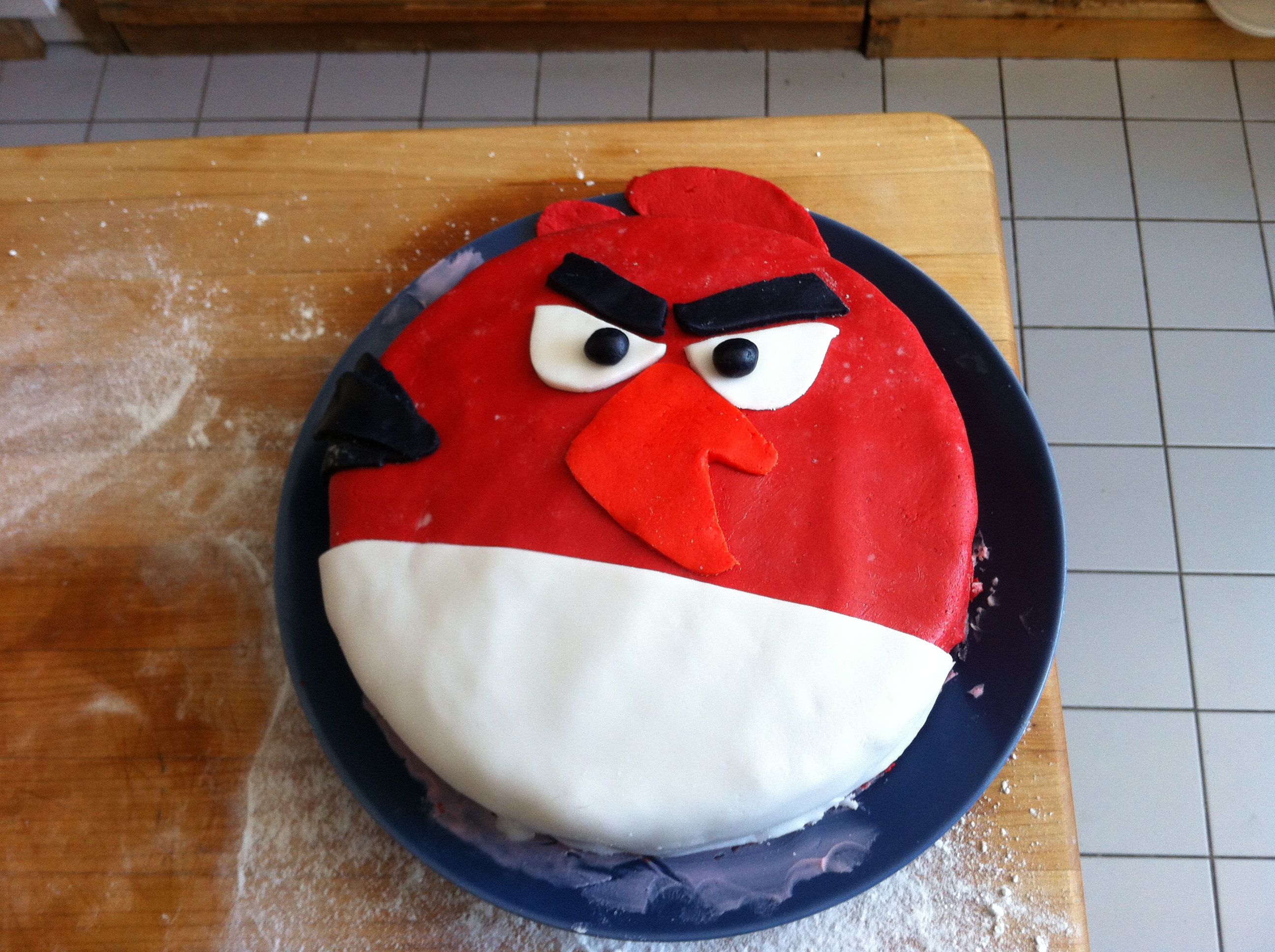 It may not have been a culinary masterpiece, but I’m pretty proud of it, and B was very satisfied.  And Dan, who has been chuckling in my direction since I decided to undertake this project, had to admit he was impressed, too.  The cake was a successful piece in a wonderful birthday.  Not too bad for my first fondant adventure.