So, this is it — 24 hours from now, my house will have been full of 2-6 year olds and accompanying parents for several hours, and, probably, they’ll all already be headed home.  How many will be here is still a mystery, although we have gotten 2 more “yes” RSVPs and one more “no” since last week.  I checked with some Austrian friends (a grand total of 2), and they report that I shouldn’t put too much stock in the RSVPs I have or have not gotten — people who have not responded will probably show up, and it’s equally possible that people who have said they’ll be here won’t come.  So, we’ll see.  We could end up with 5 kids here, or we could end up with 15.  I’ll know tomorrow.  (Note for the next party I throw in Austria — inviting fewer people makes things much simpler.)

Right now, coming down to the wire, I feel like I should be more stressed than I am.  An unknown number of people are coming to my house tomorrow.  Many of them may be people I’ve never met before (parents of B’s classmates) and I may not be able to communicate with all of them.  We’re crossing a lot of cultures, and I truly have no idea what kinds of expectations people might have of a 5 year old’s birthday party in Austria.  (I’ve only been to one birthday party since I’ve been here.) 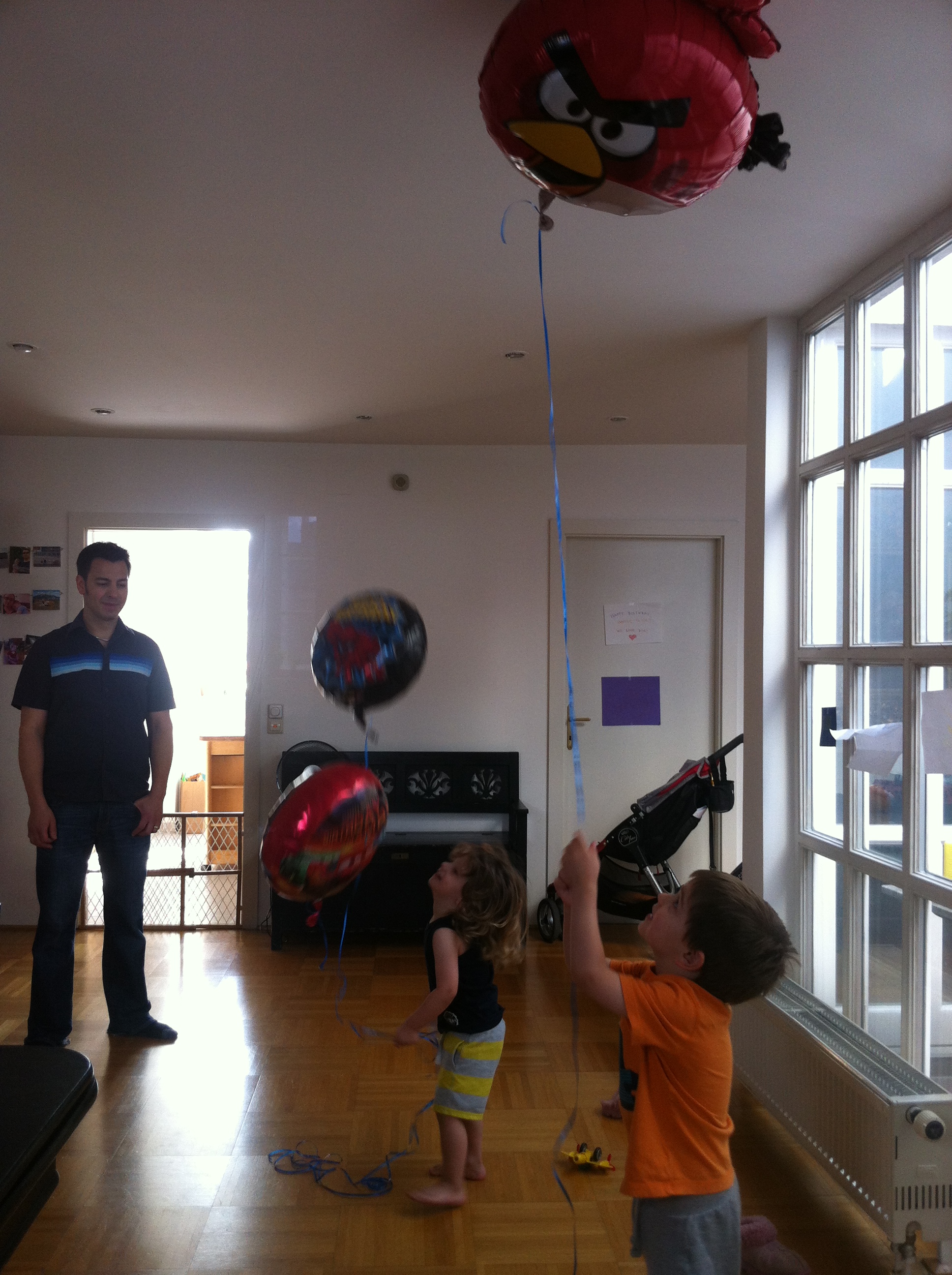 But I’m actually feeling ok.  It will be whatever it will be, and if I break every Austrian etiquette rule, well, I’ll continue to play the “not from around here” card.  Actually, recognizing how out of my element I am is incredibly liberating.  It’s another one of those moments when I accept the probable imperfection of the situation, which allows me to relax and focus on what’s really important.  Do we have balloons?  Check.  Cake?  Not yet, but Austria is the land of cake, so even if something goes awry with our ordered-and-to-be-dropped-off-tomorrow cake, we’ll be able to figure something out.  Will there be kids here?  I think so.  Do we have enough snacks and drinks?  Close enough, I think.  Will Benjamin have a good time?  Most likely, and that’s what really matters.

We’re all really working together to make this party happen, which is making it fun just even to prepare.  We spent much of last weekend getting the house ready — cleaning, mostly — so that we would have less to do today and tomorrow and might have enough energy and good cheer left to actually enjoy the party.  The boys have been amazing at helping me get ready.  (Really.)  We’ve been working together on the decorations and the games we’re going to play:  Angry Bird basketball (regular basketball, but using Angry Bird stuffed animals as the ball), Angry Bird bowling (rolling/throwing stuffed Angry Birds at paper “bowling pins” with pictures of pigs on them) and a wall of repurposed cardboard boxes, at which we’re going to throw stuffed Angry Birds, thus knocking down the blocks.  The boys have done most of the “artwork” for the game supplies, and Benjamin came up with the idea we’re using to make the paper bowling pins keep their cylindrical shape.  They have also been entirely in charge of deciding which toys go in the “off-limits” room — the door will stay closed and no one will be able to play with anything inside — and for actually putting them away in there.  It’s been pretty amazing.

We’ve still got a fair bit to do this evening and tomorrow morning, but it’s not overwhelming.  I’m pretty sure we’ll be ready in time for our first guest’s arrival (which, considering this is Austria, will probably be very prompt).  In some ways, it really does feel like a lot of pressure — hosting a party for so many people, including so many that I don’t know, and having truly no idea what people will be expecting or how it’s going to go.  But, really, we can do what we want.  We’re the foreigners here, so whatever we do, we get to make it truly ours.  We can let go of anyone else’s expectations, and do it the way we want.  My greatest hope is that we allow ourselves to enjoy the day.  (I hope that Benjamin has a great time, of course, but I can’t guarantee that, either — it’s hard to know what expectations might still lurk in the mind of an almost 5 year old.)  We’ll see!