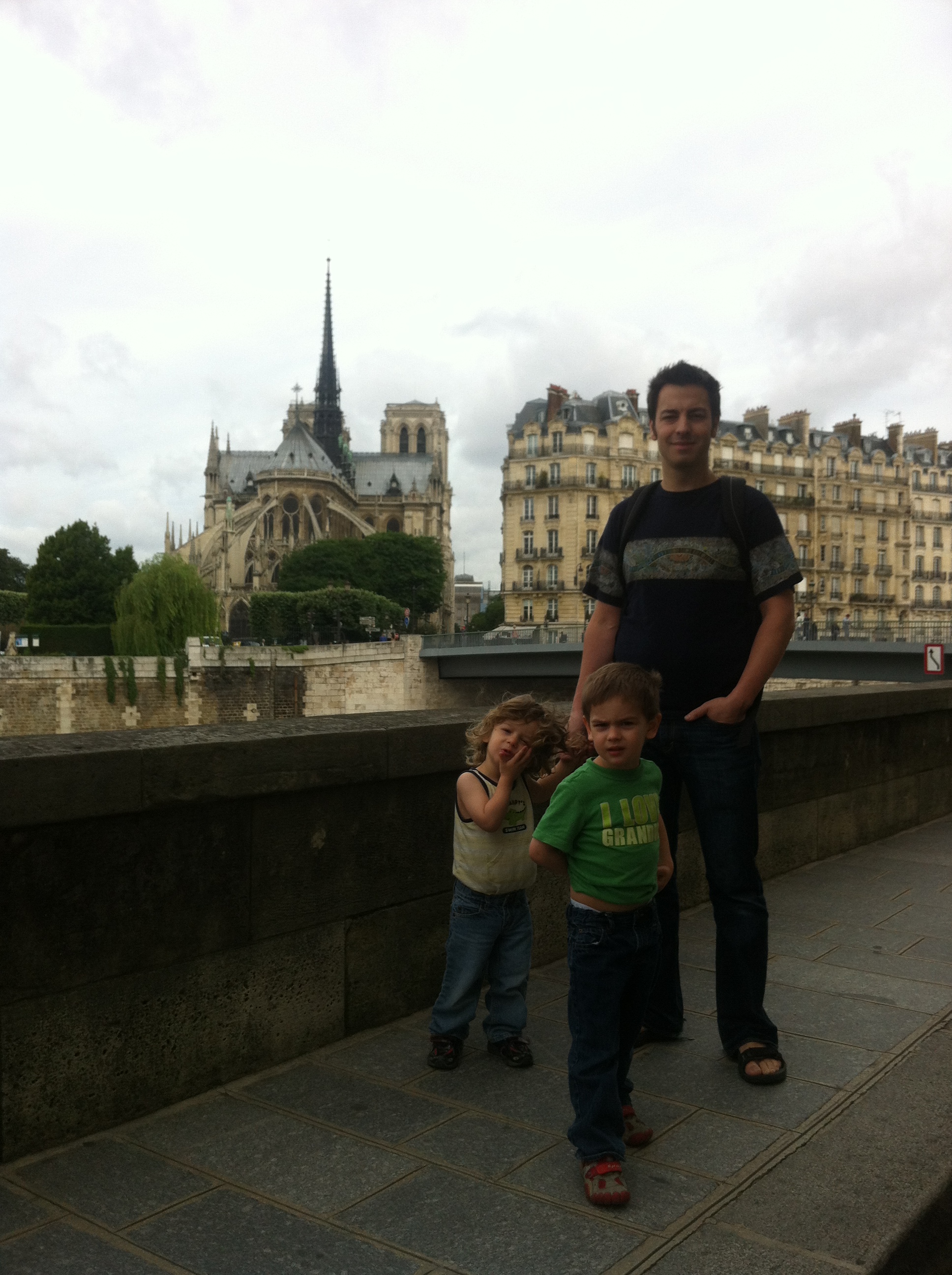 We weren’t sure it was going to happen (much like last year!) but we did make it to Paris late last Friday night.  Charles de Gaulle airport is stunning in its size.  Having travelled a lot, I don’t know if I’ve ever seen an airport that covered so much real estate.  (We flew in and out of Orly last time.)  Many major airports have multiple terminals, but I don’t think they’re usually quite so far apart.  (There are 3 separate terminals, and I think we had been in the cab and on our way for nearly 10 minutes by the time we passed the last terminal.) 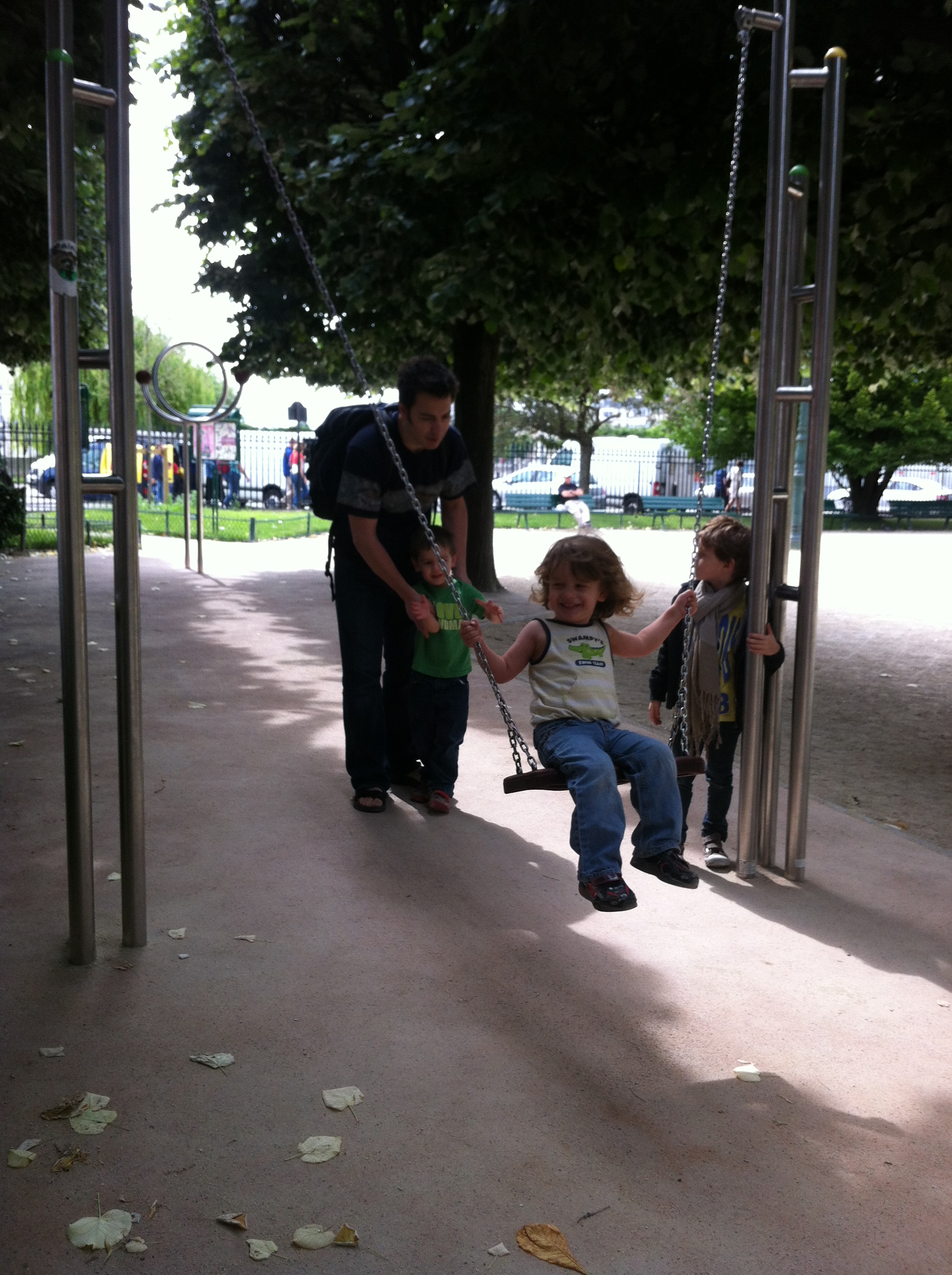 We’d been thinking that a late night flight would be ok — from Vienna, it’s only a 2 hour flight — we’d get in late and be exhausted, but we’d all probably sleep in on Saturday, and then be able to enjoy a full day in Paris (as opposed to flying mid-day on Saturday, which might have made all of Saturday feel like a non-day in Paris).  Of course, it didn’t turn out that way.  We got in late (though earlier than we expected, and rather disoriented by the fact that we landed after 10:00, but the sun wasn’t finished setting yet) but the kids still got up at their usual time (before 7) on Saturday.  So, Saturday didn’t go as planned. 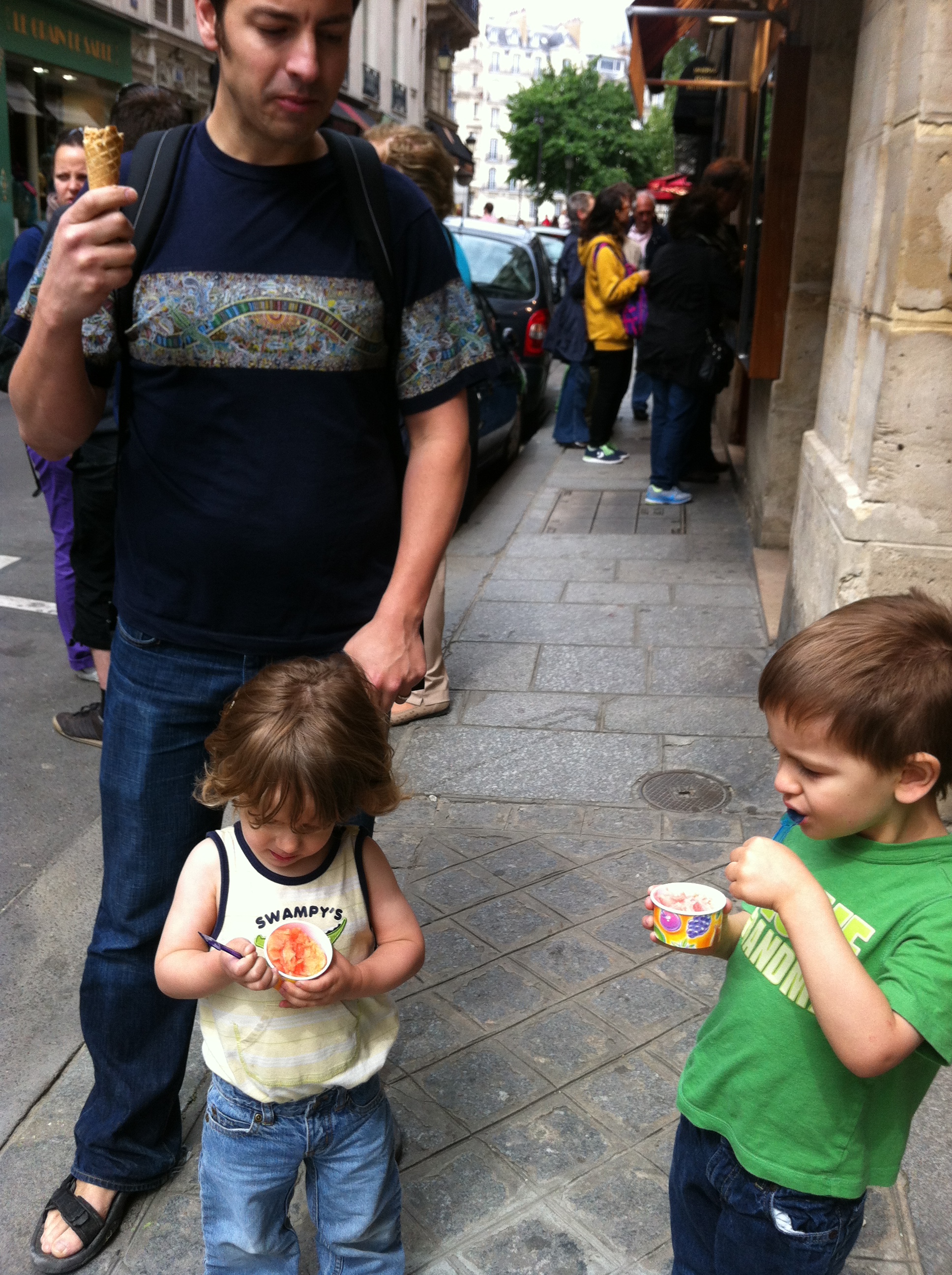 Although the kids were up and ready to go, they were anything but well-rested.  Stopping in to the boulangerie across the street to pick up breakfast turned into a screaming “I want a cookie!” disaster.  After managing to get everyone fed, the boys focused their attention on finding gelato (Benjamin was set on getting apple gelato, which we never found).  They were fussy, short-tempered and tired.  So were we, so we dedicated the morning to running around in the park behind Notre Dame between several tantrums and crying spells.  The kids were just so tired, and we were tired, and we got to a point where we just wanted to make them happy, so we abandoned all illusion of plans for the morning.  But they were really too tired to be very happy, so it didn’t quite work until we all got to take naps.  We didn’t really have much of a usable day until late in the afternoon, after we’d all gotten some rest (so, in reality, arriving in Paris early Saturday afternoon would probably have given us a very similar day). 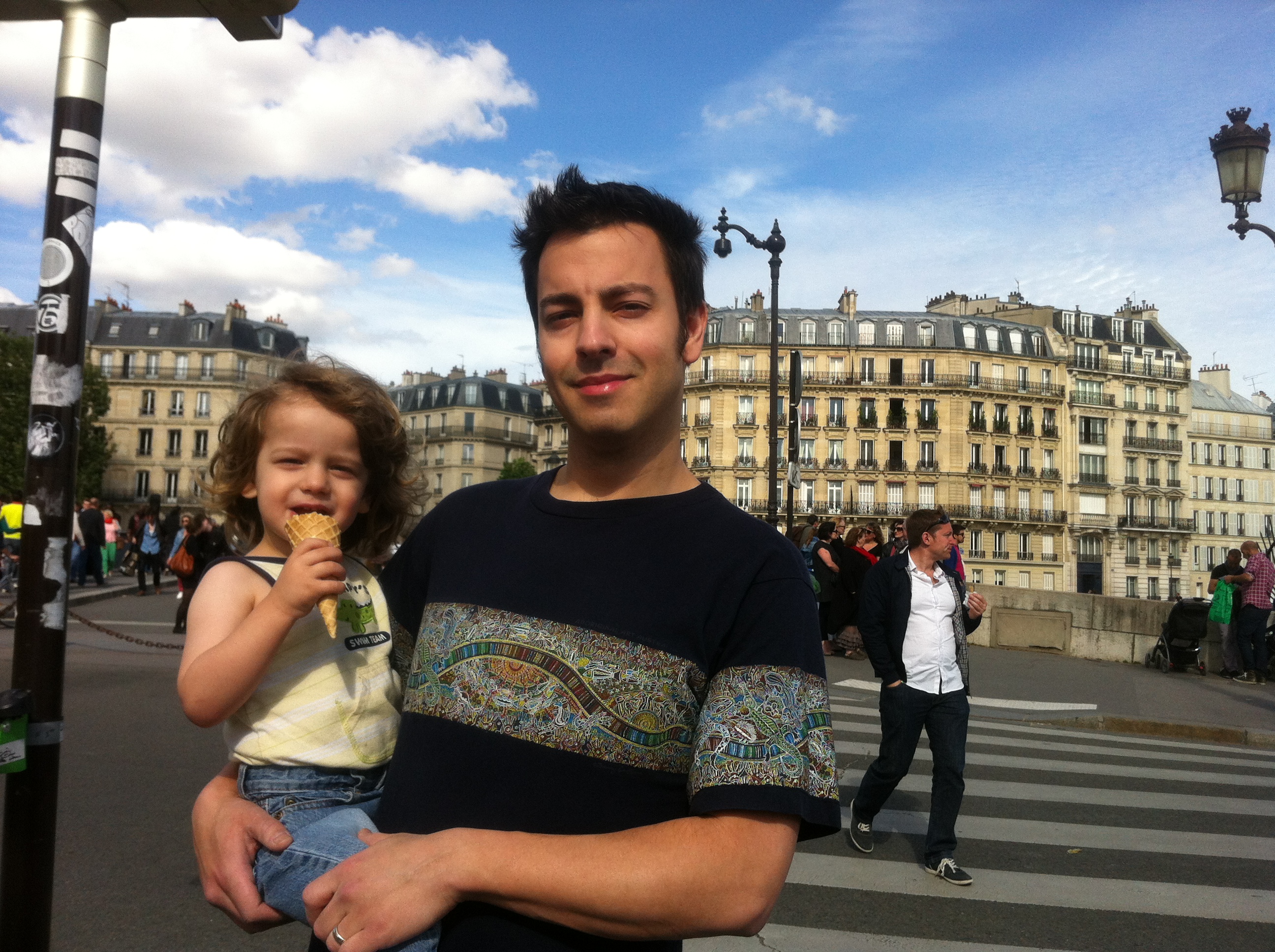 Still, it was truly lovely to be back in Paris.  It was nice to come back to somewhere we’d been before.  We stayed in the same apartment as last year, so we knew the place well, and we also knew the neighborhood, the local restaurants, and how to get to the closest landmarks.  It was also really nice to be in a city where we’ve already checked so many big to-dos off of our list — it made this trip feel much more relaxed and laid back, since we didn’t feel like there were many things we HAD to do this time around.  My French was more eclipsed by my German this time (in that I more often opened my mouth to say something in French and had German come out unexpectedly — numbers were particularly difficult), but I’m much braver about using my French and way less discouraged by the (many) mistakes that I made. 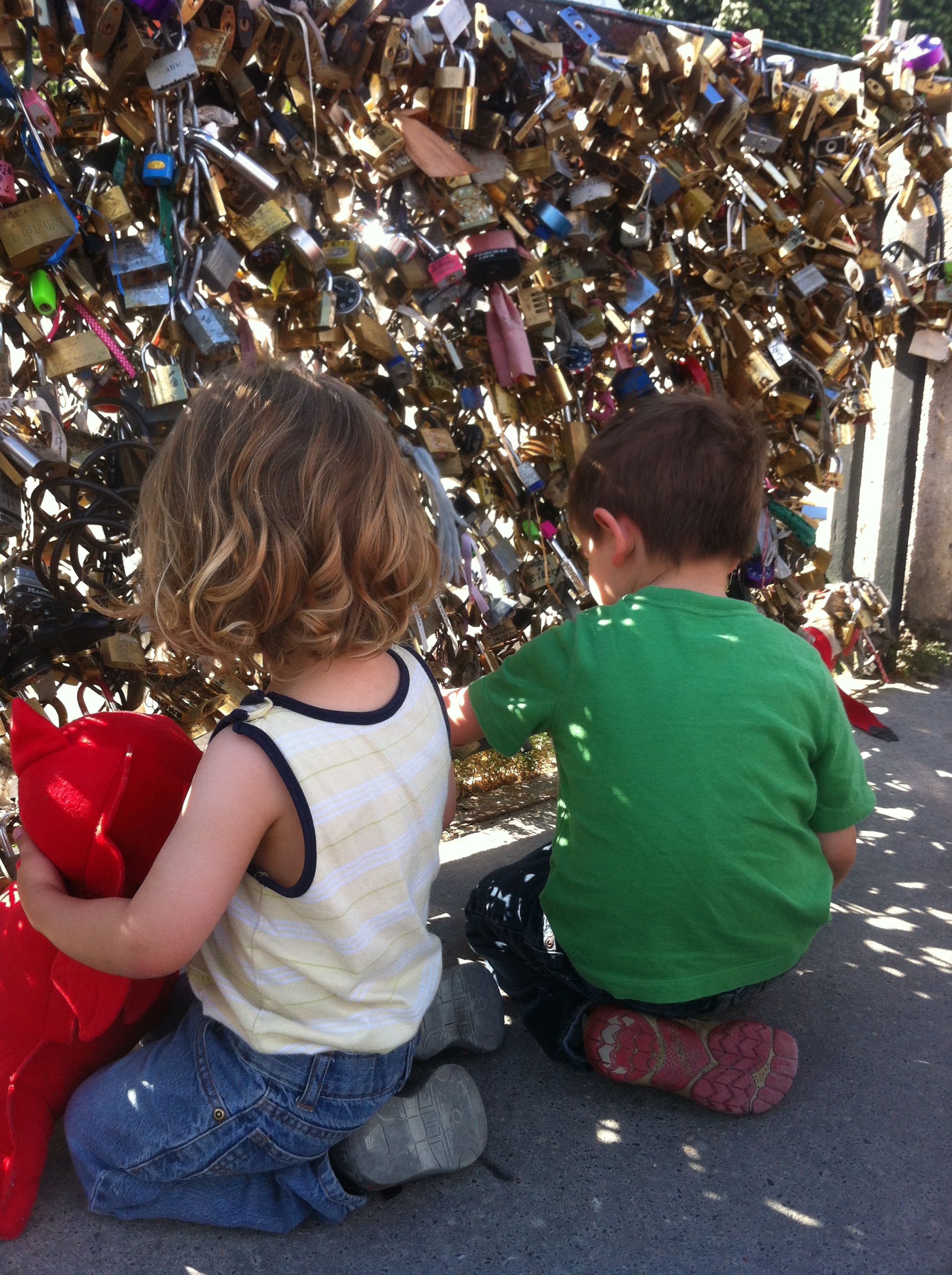 I just really like Paris.  I love the vibe, the energy of the people on the street, the bicycles everywhere, the sound of spoken French, the way older people smile at the kids and other parents encourage their kids to say bonjour to the kids that they meet at the park.  Paris is a city where walking feels like a great way to get around — the streets are alternately wide and inviting or narrow and intriguing.  Parisians really seem to love their city — the people strolling along the Seine and picnicking in the parks seem to speak French more often than not — those aren’t activities just for tourists. 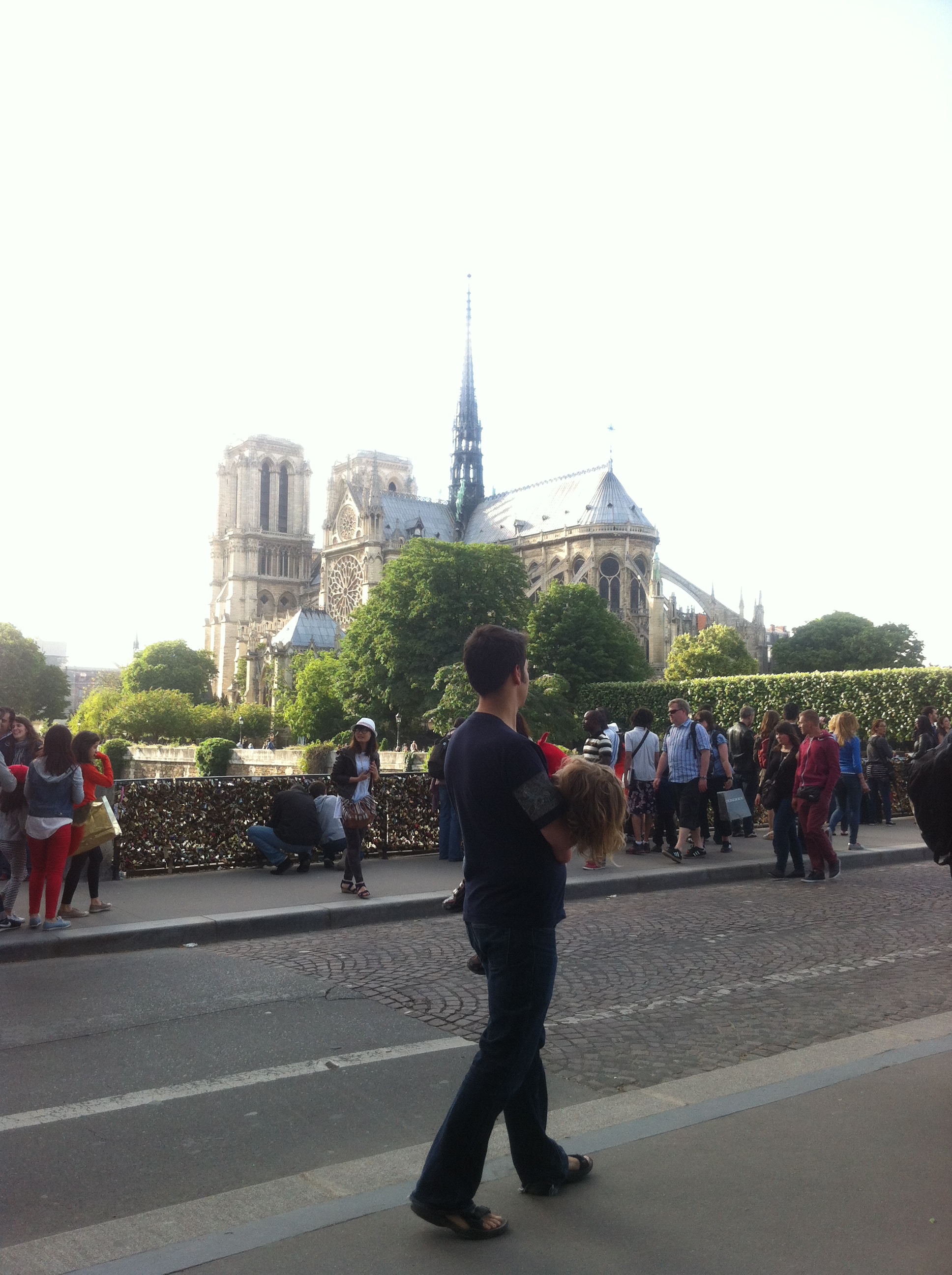 After nap time, we had some (more) gelato and walked around some parts of the city we hadn’t explored before.  Paris is absolutely beautiful this time of year (as it was in April and May) and I could have walked for hours.  The kids didn’t last long, though (Dan ended up carrying Liam home), so we headed back to the apartment for dinner, but then went back out to stroll around afterwards.

This time of year, dusk in Paris seems to last for hours.  Evening begins after dinner and stretches out for hours.  We walked along the Seine as the light was fading from the sky and marvelled at the color of the river and the feeling of the air.

Paris is just so beautiful, and we lost all track of time.  It takes so long for night to fall that by the time we started thinking it might be time to head home it was after 10:30 at night.  Oops.  So much for getting to bed early!

1 thought on “Return to Paris”