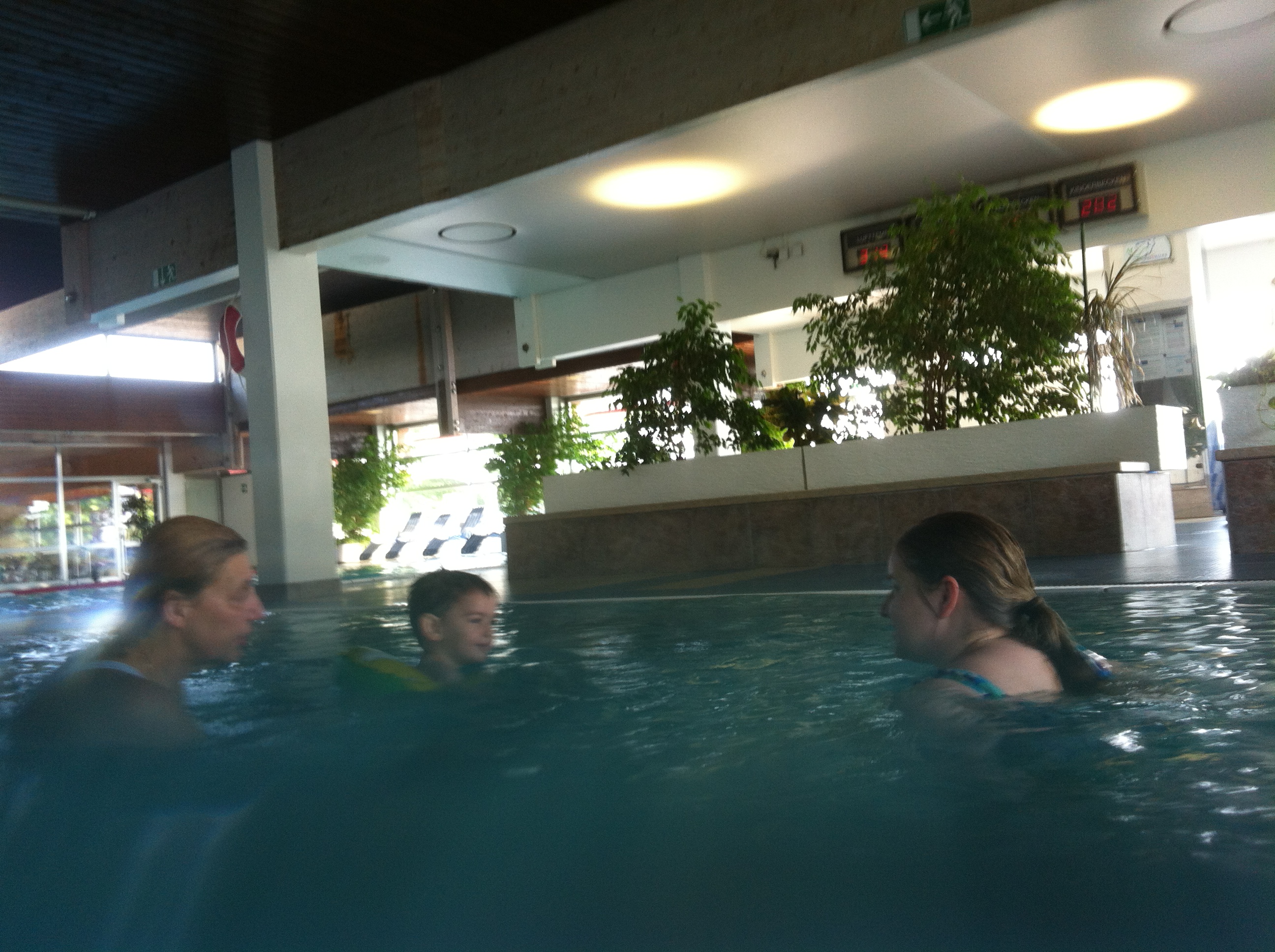 I always knew my kids would be the same.  For the sake of safety, as well as fun, I wanted them to learn early.  (Especially because it’s one of those things where not knowing creates such fear around water that at some point it becomes incredibly difficult to be in the water long enough to learn how.  I knew someone in college who didn’t know how to swim, and he was so deathly afraid of the water that I’d imagine he never learned — his fear was the result of not knowing how to swim, not the cause of it.  Because he didn’t know how, he was terrified to go in or even near water.  How was he ever going to learn?  And if he ever did, I’m sure just getting in the pool the first time was profoundly traumatic.) 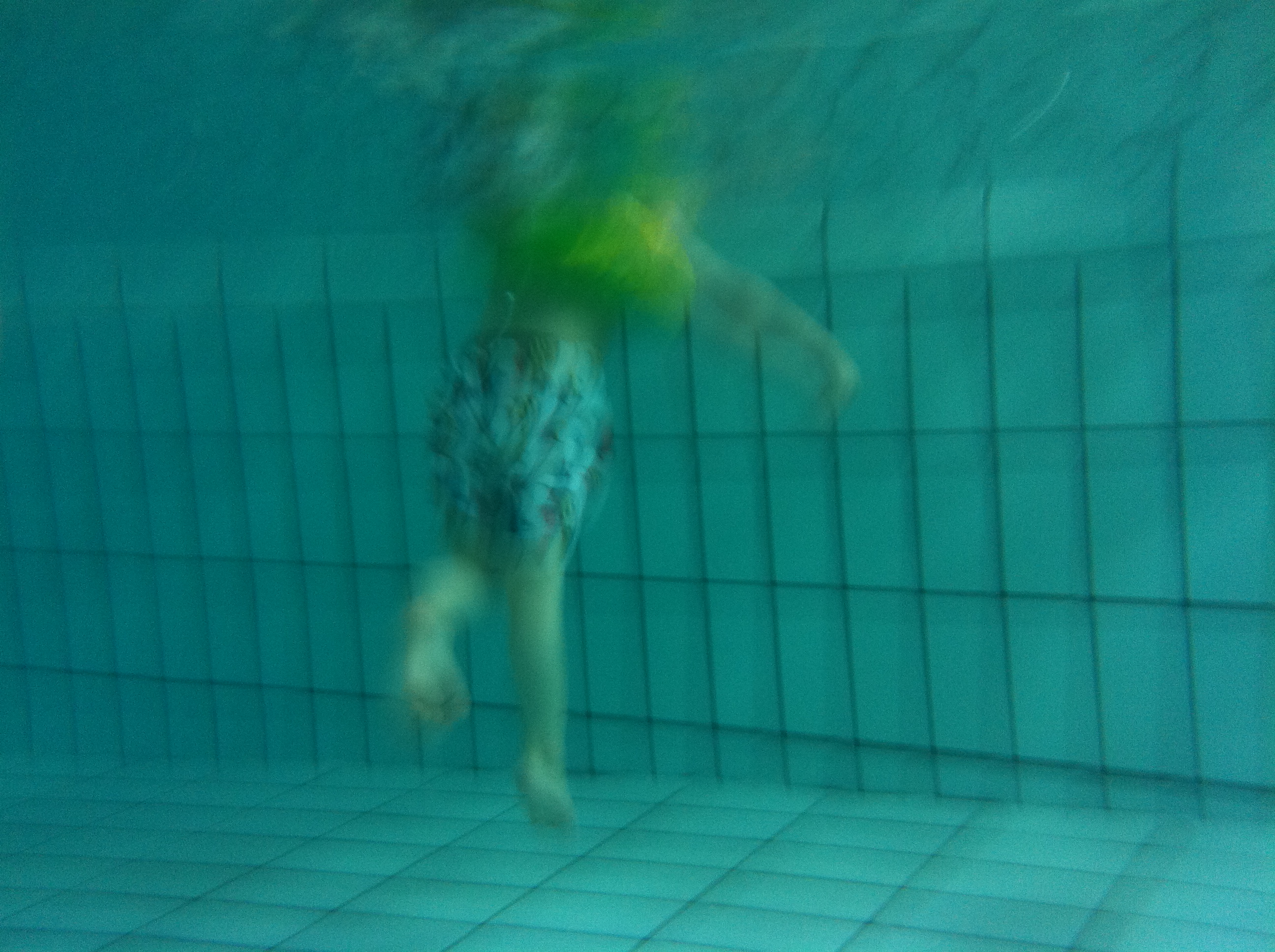 Unfortunately, when we left Virginia, and our DC-suburb condo, we also lost regular access to a swimming pool.  We’ve been swimming a handful of times since we’ve moved to Austria (many of them when we were visiting the States last summer), but not enough for the kids to really learn how, and I feel the fear of them not knowing how creeping in on me.  I want to take care of that before it sets in for the kids, too, so the boys took their first swimming lesson on Saturday.

As always, finding instruction in something in a foreign country is a challenge, especially because we wanted to find lessons in English if possible.  Dan found a place, and we took a scenic strassenbahn ride out to a lovely part of Döbling (an outer district of Vienna) that we’d never visited before.  And, as always, there were cultural lessons to go with the swimming ones.

First, even though I live in Europe, and have for two years, and even though I consider myself open-minded, I am always shocked by the lack of modesty and body consciousness here.  When we got to the pool and went to change into our swimsuits there was only one changing room.  Co-ed.  They had little changing closets with doors for privacy, but I’d say just over half of the people used them.  The others changed, with varying levels of discretion, right by their lockers.  While it was a surprise for my prudish American sensibilities, it also meant that I certainly had no qualms about changing the boys’ clothes out in the open, which made things easy.

Out by the pool, the same lack of body consciousness was evident — in a really positive way.  People of all sizes and ages and levels of fitness and physical attractiveness exhibited the same level of comfort with being in or around the pool.  Some wore tiny swimsuits, some were more covered up (though none more than me in my skirted suit — and I was far from being the oldest or heaviest person there).  I didn’t see a t-shirt or a cover-up anywhere, either.  And it just truly felt like no one cared.  No one was being objectified — neither being snickered at or leered at.  There wasn’t any staring, of any kind.  I got the sense that people were there to swim (duh) not to evaluate each other.  Everywhere I looked, I saw people just being people.  Not hiding or being embarrassed, but just sitting or walking or getting in the pool.  A few of the fit, pretty young women were preening a bit (and only a VERY little bit), but there just wasn’t the air of critique and shaming that I am so used to feeling poolside in the States.  Again, I felt silly for being so modest in my own swimsuit choice (which, interestingly, feels almost inappropriately skin-baring back home).  It’s an incredibly liberating feeling.  After my years of indoctrination into the American cultural idea that most people are unfit to wear a swimsuit, this feels like being dropped off on an alien planet (but WOW does it feel better). 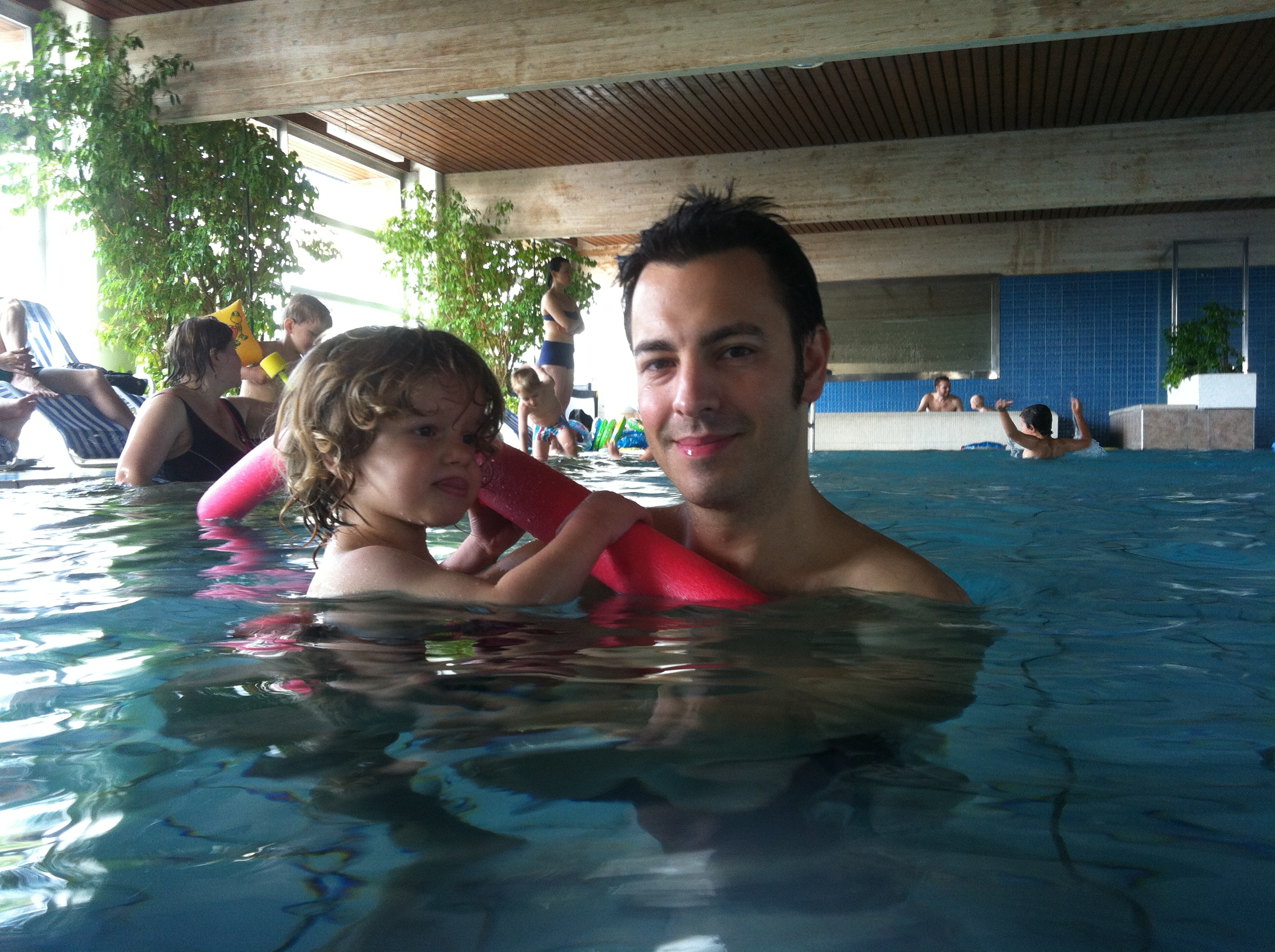 The swim lesson itself was great.  Our teacher, who thankfully spoke excellent English and didn’t seem put out about having to use it, did a great job of combining practice for B on basic skills like paddling and holding his breath with some introduction to other strokes and kicking styles.  Liam got a little overwhelmed and opted to mostly play, but he got more comfortable by the end, too.  B did the backstroke and even jumped into the pool on his own (which surprised me — especially when he repeated it several times) and, perhaps most importantly, did a little “swimming” by himself (with a ring) and climbed OUT of the pool on his own several times.  We go back again in 2 weeks, but I feel like we’re on our way to setting a good foundation for a really important skill.  And I’m always grateful with the eye-opening, preconception-breaking cultural education I get just from living here.  I’m learning to see a whole other possible reality.